All images courtesy and copyright Netflix.

It’s a fact-of-life that tiny questions, such as ‘Who am I?’, can become our biggest, soul-searching pre-occupations.

Exploration of this existential puzzle is at the beating heart of acclaimed director Alejandro Iñárritu’s self-confessed, “almighty guacamole” of a movie, Bardo, False Chronicle Of A Handful Of Truths. Its immersive, surreal swirl of intimate contemplation combined with epic facts and fables from Mexican history, was lensed with considerable brio by French-Iranian cinematographer Darius Khondji AFC ASC, whose formidable list of credits include Se7ven (1995), Evita (1996), My Blueberry Nights (2007), The Lost City Of Z (2016), Okja (2017) and Uncut Gems (2019). 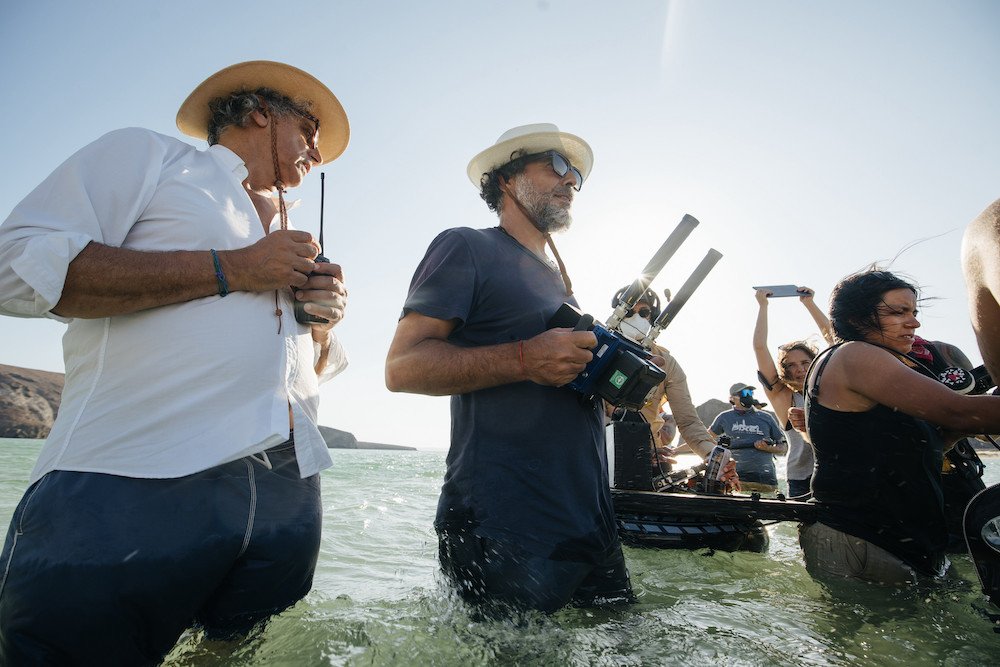 “I met Alejandro many years ago, when we were both much younger, when he came to see Sean Penn on the set of The Interpreter (2005), a movie I was shooting for Sydney Pollack,” Khondji reminisces. “Alejandro came over to say hello to me, and although we had the briefest of conversations, I remember being left with a very nice feeling about him. We didn’t meet again until 15 years later, when our mutual friend, Alfonso Cuarón, asked me to give Alejandro a call about Bardo.

“I was very busy between movies at the time, but, of course, I called Alejandro to find out what he wanted. We started a really interesting conversation about life and the journey of the main character in film, and found there was a real connection, a genuine clarity of understanding, between us. We continued that during several other conversations, which was a pleasant surprise to both of us, as I had not actually received the script.” 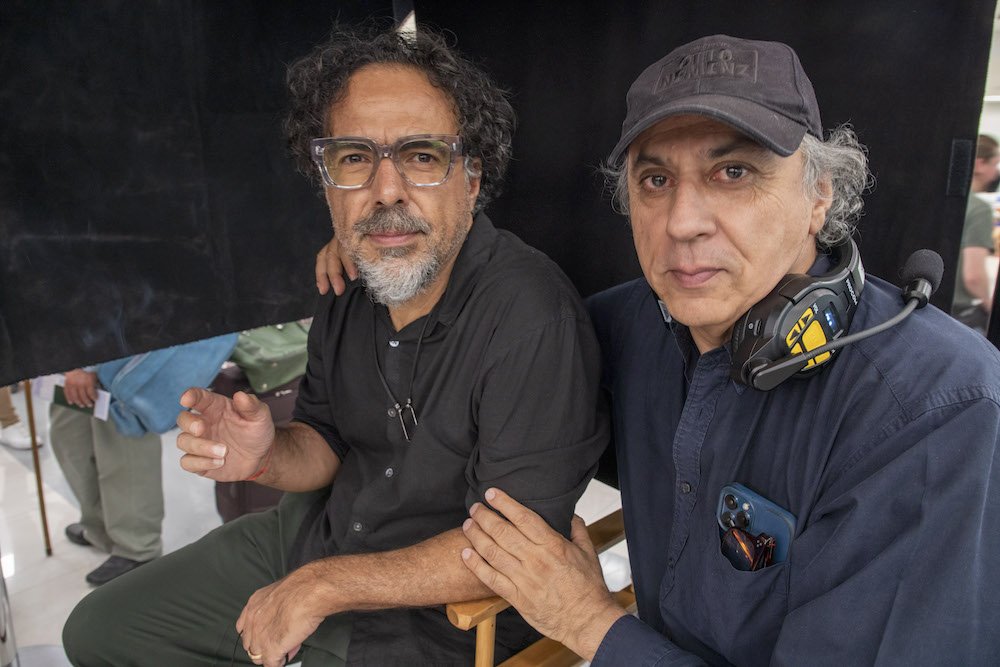 When the script eventually arrived, in December 2020, Khondji says it was “magnificent and multi-layered. I don’t always become so sensitive about the screenplays I read, but I was really touched by this one. There was simply no way I could not do this film with Alejandro, and by the beginning of January 2021 I found myself on a plane heading off to lockdown Mexico. It is very interesting to go to a city that you don’t know with a foreign eye.”

Bardo, False Chronicle Of A Handful Of Truths follows the intimate and moving journey of Silverio, a renowned Mexican journalist and documentary filmmaker living in Los Angeles, who, after being named the recipient of a prestigious international award, is compelled to return to his native country, unaware that this simple trip will push him to an existential limit. 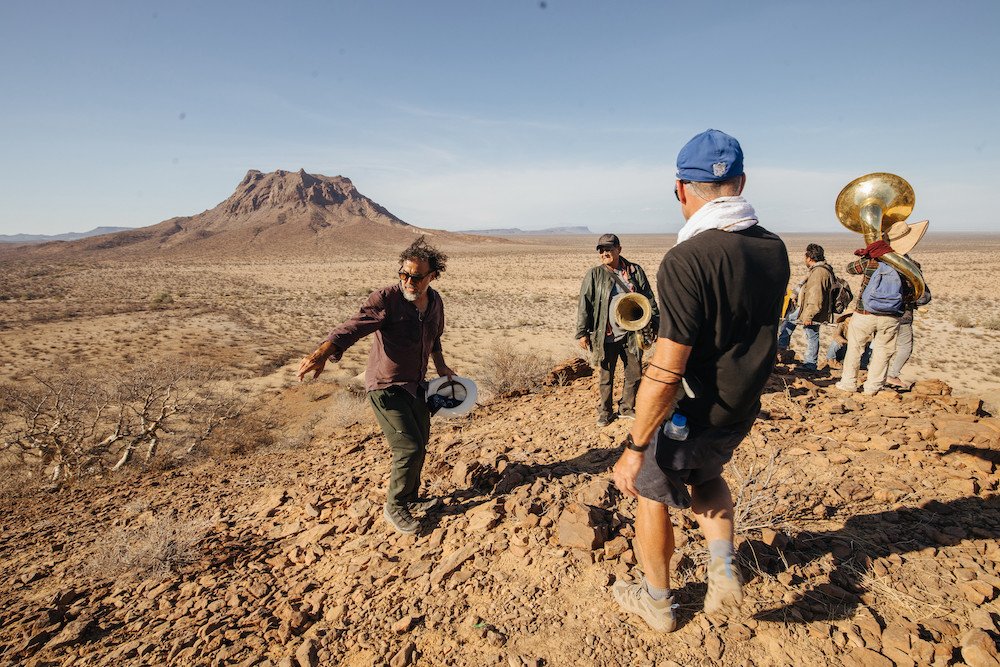 Uncertain memories and long-held fears pierce into the present, filling Silverio’s everyday life with a sense of bewilderment and wonder. Expressing emotion and laughter, Silverio grapples with universal yet intimate questions about identity, success, migration, mortality, the history of Mexico and the deep familial bonds he shares with his wife and children. Indeed, what it really means to be human in these peculiar, modern-day times.

Bardo premiered, and competed for the Golden Lion, at the 2022 Venice Film Festival in competition, before releasing in cinemas and streaming on Netflix, which financed the film. Amongst many plaudits, the free-flowing nature of Khondji’s immersive, wide-angled cinematography, often with long, dream-like ‘oners’, have highlighted Bardo as one of the most thought-provoking and visually-impressive films in 2022. 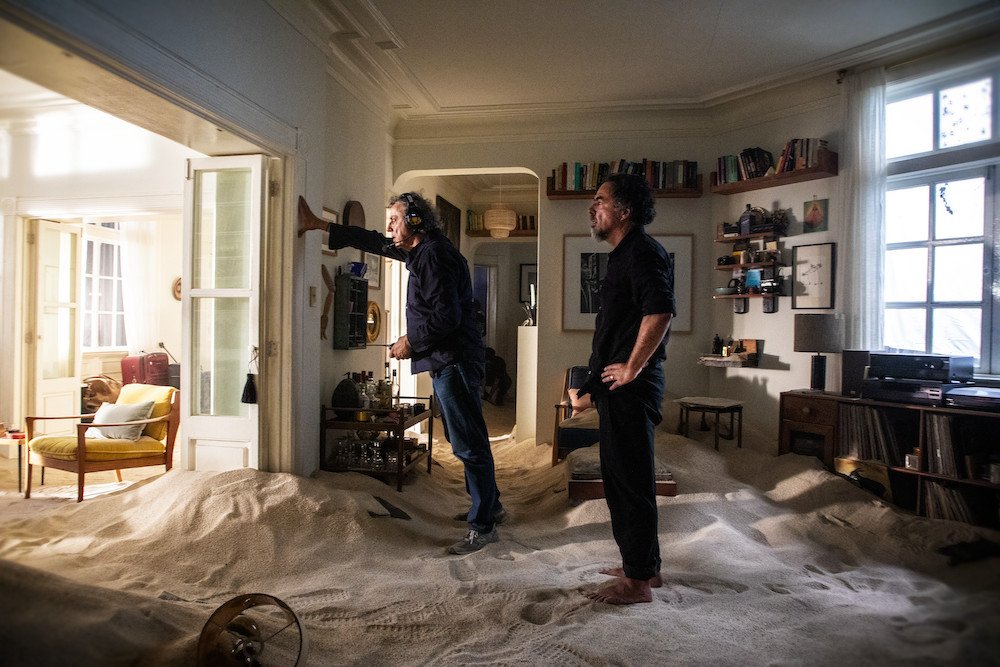 Principal photography on the film began on March 3, 2021, at multiple locations around Mexico, the historic centre of Mexico City, and sets at Etudios Churubus, one of the oldest and largest movie studios in the country, before wrapping some 110 shooting days later in mid-September.

The surrealist paintings of De Chirico, Delvaux and Magritte informed the images in the film, as well as what Khondji describes as “the colour and feeling in the air” from the stills work of photographer Vivian Maier. Iñárritu and Khondji and were also inspired by classic films from directors such as Roy Anderson, Luis Buñuel, Federico Fellini and Jean-Luc Godard. 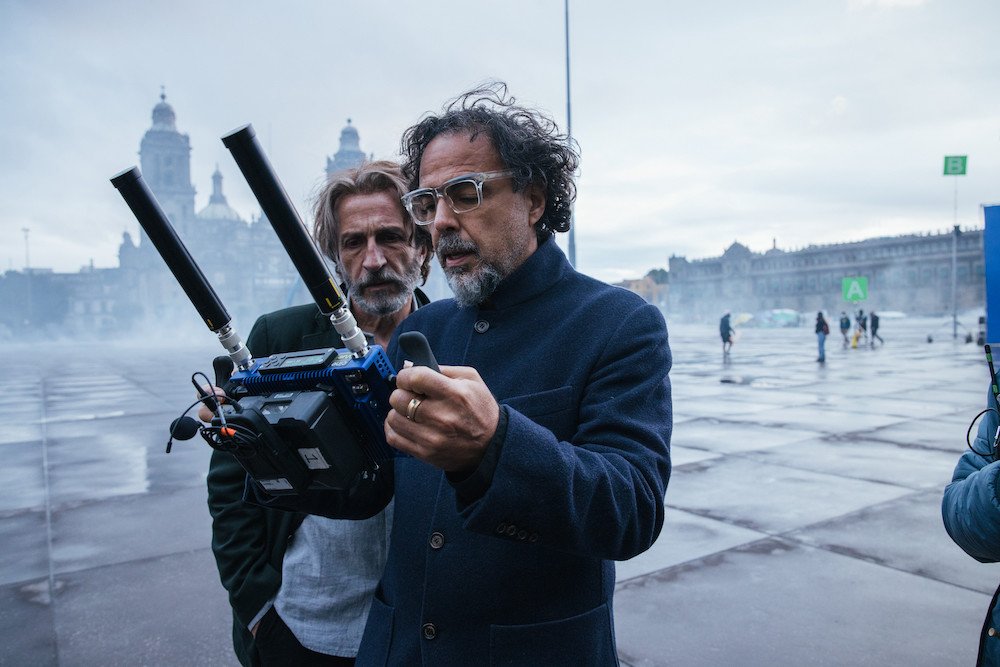 “After much discussion, we decided to shoot Bardo in large format, and thought about capturing on 65mm film for its immersive qualities,” says Khondji. “But in view of the ways Alejandro wanted to move the camera in long and complicated takes, those cameras would have been too heavy and cumbersome. I had previous experience with the Alexa 65, which is a much smaller package, and really love the way it depicts the presence of the actors against a landscape, how they can be larger-than-life, especially in widescreen.

“As for the lenses, it was Alejandro who brought me into the world of wide angle lenses, that he had used so effectively on Birdman or (The Unexpected Virtue of Ignorance) (2014) and The Revenant (2015) (both DP’d by Emmanuel Lubezki AMC ASC). I love wide angle lenses, but I would never have thought about shooting some of the close-ups, landscapes and long-take sequences that he had in mind with a 17mm, 21mm or a 24mm. 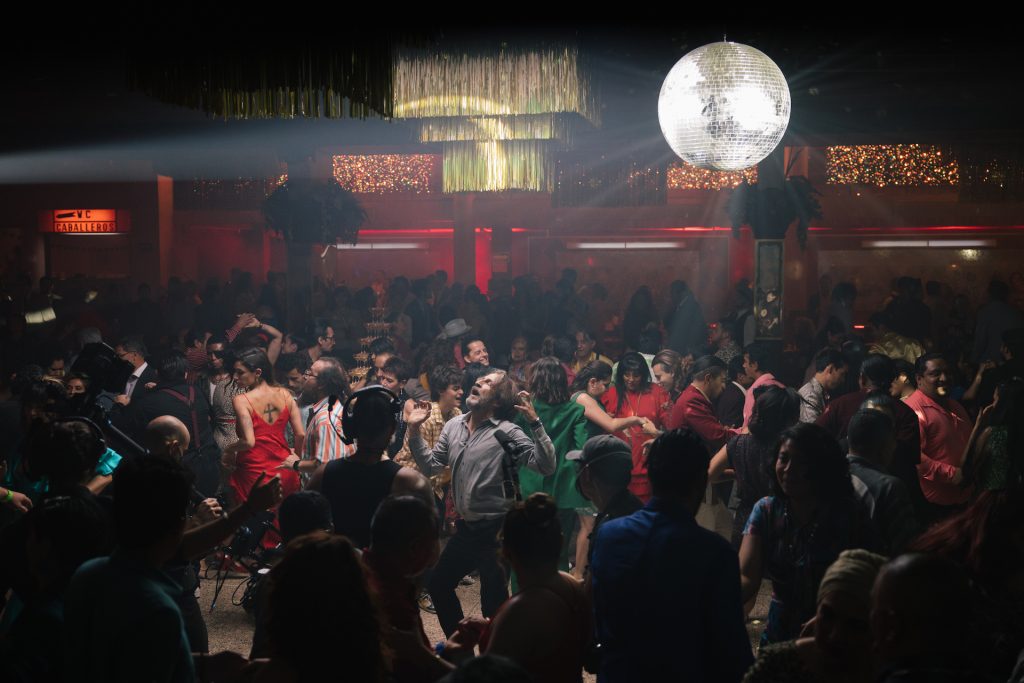 “I love mixing Panavision lenses with ARRI cameras. We had a set of Panavision Spheros custom-made for the Alexa 65 sensor, and ordered two of each, just in case of any accidents or issues.

“I am not a fan of shooting in 3D stereo, but I do like the feeling of 3D. I’m not especially interested in the high definition of the camera either. But, the way those lenses could wrap around a face, almost from ear-to-ear, on a close-up, gave a real sensation of depth and dimension to the image. Then, when you move and drift the camera along with the character, it creates a feeling that you are in a slightly surreal dream.” 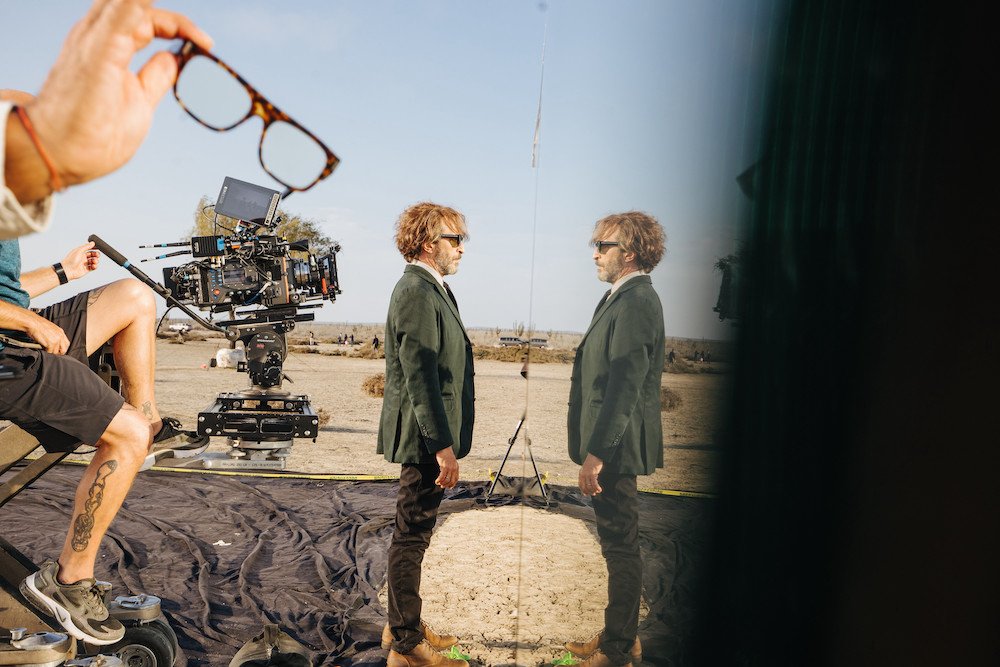 To give the images cinematic sweep, Khondji deployed the camera on the dolly, Technocrane, traditional Steadicam and the ARRI-manufactured Trinity stabilised camera arm.

“We wanted the camera to be perpetually moving, as life itself is a perpetual movement,” Khondji explains. “Every second you pass, asking and answering a question, is a moment of your life that will never come back again. And we wanted the film to feel like this with the camera.”

He singles out the sprawling sequence where Silverio films migrants in the desert, shot using the Trinity rig, as a particularly strong achievement. “When we were in the desert with the migrants, we really were with them, with their souls, behind them, in front of them, seeing them in the distance – always in movement seeing them almost as if they are ghosts in a perishing life.” 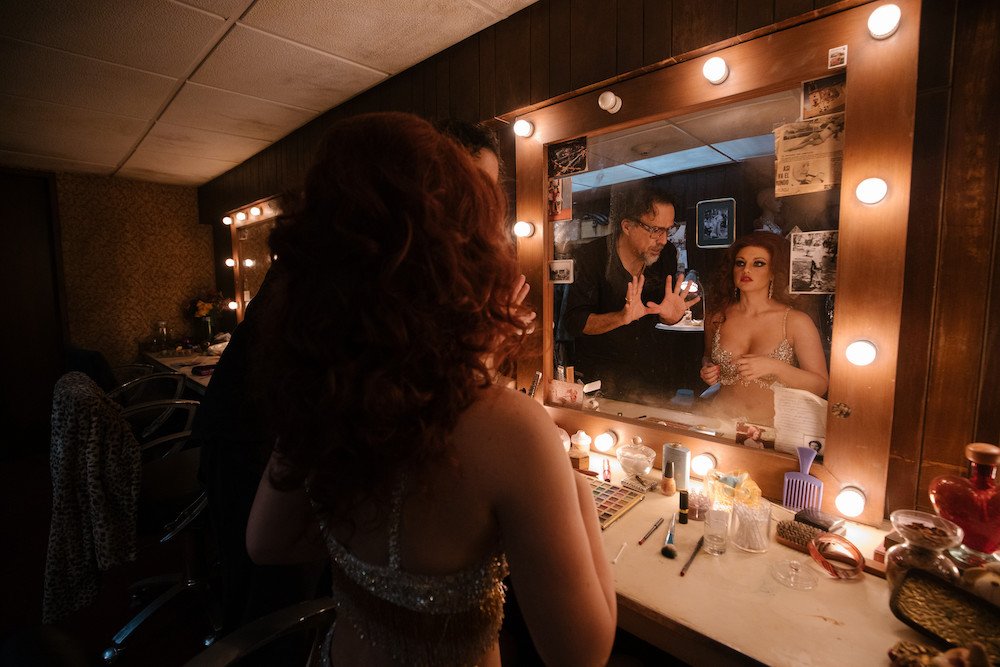 Another one of Bardo’s most spectacular sequences is set during a crowded celebration party for Silverio at the renowned California Dancing Club in Mexico City. Preparation for that sequence required particularly close collaboration between Khondji, A-camera operator Ari Robins, focus puller David Seekins and grips Richie Guinness and Joe Belschner.

“That scene was, for sure, the biggest challenge,” remembers Khondji. “The location had been closed for many months due to the Covid pandemic and, as a result, the ceilings were falling down. The construction team had to shore-up the roofs, and then carry out a structural review in order to be able to put all of the people in the scene. 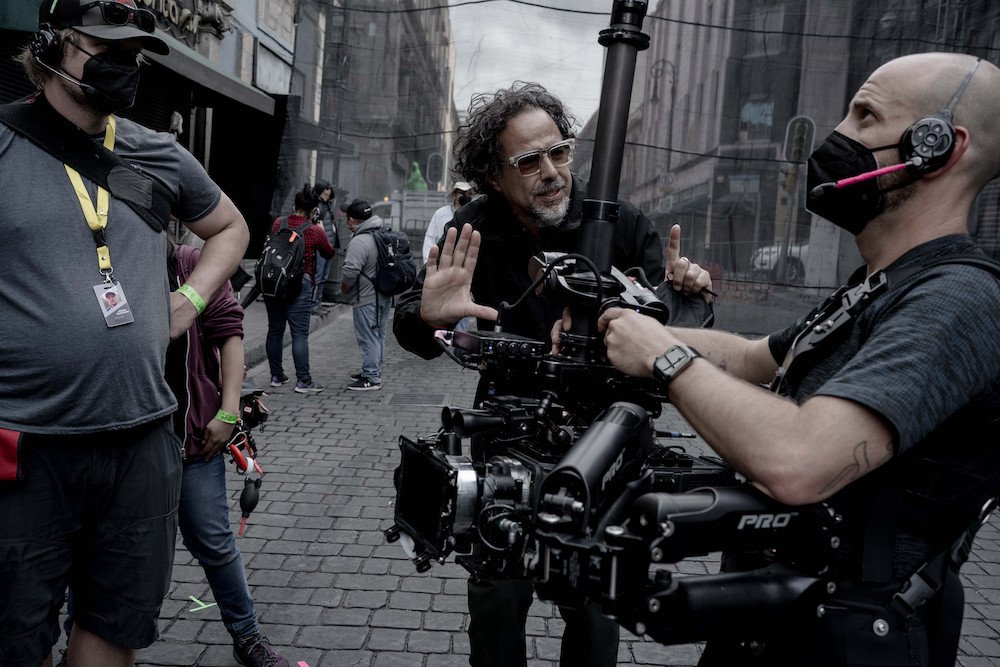 “It was a week’s worth of work to transform it, and to make it ours understanding what the colours of the space were, the elements we needed in terms of lighting, and how we would choreograph the camera.

“Also, the that scene is one of the most intense musical experiences in the film. Alejandro had this idea to introduce a famous acapella voice, David Bowie, with his iconic song ‘Let’s Dance’, to give an amazing sound experience too, so that all-of-a-sudden you travel inside Silverio’s head as everything goes crazy.

“We rehearsed and rehearsed that scene, with the camera crew dancing their way through the crowds – over ramps and up and down as small lift – and it worked so beautifully.” 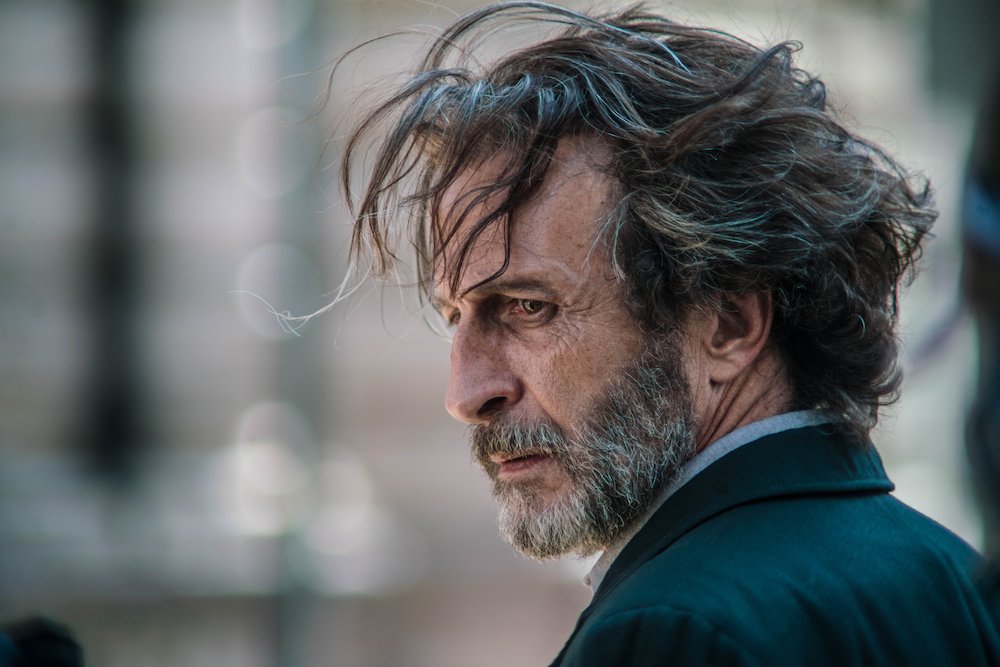 During test and prep, Khondji brought together the talents of DIT/on-set colourist Gabriel Kolodny, and DI grader Damien Van Der Cruyssen at Harbor, to develop a small number of day exterior/interior and night-time LUTs. These were designed to imbue the images with enhanced saturation, slightly reduced contrast, and smokey blacks for detail in shadows and shade. During production he also used subtle smoke filtration on the camera, to encourage a certain soft patina on the image.

“I appreciate that some cinematographers do not like grading on-set, but for me it’s an essential part of delivering the images as I intend them to post production,” Khondji declares. “When I shoot photochemically I cannot stand having badly-graded dailies, and the same applies in digital. I always like to have a really good timer doing the dailies.

“Gabriel had a digital lab near-set and I spent time with him every day, so that when the images arrived with Damian or the final DI, they were already graded to a certain extent the way I wanted them. Of course, when we came to do the final DI, we pushed and pulled things around, but that initial grading is so important.”

“You always need a great gaffer, and with the preponderance of LED lighting instruments these days, your gaffer needs to be accompanied by a great desk operator to do the programming. Thorsten and Lukas are two very impressive young lighting artists, in what is becoming one of the most important roles on-set now.

“In the California Dancing Club, for example, we wanted the lighting to move and change with the passage of time and motion of the action. We installed thousands and thousands of lights in different areas of the venue to create pools of light, all linked back to GrandMA control console, where Lukas did the light mixing. The way he changed and adjusted the lighting in tandem with the action was very impressive.

“A more subtle example is the kitchen scene at breakfast, between Silverio and his son Lorenzo. It starts as very sunny day morning, but as they converse, the wind begins to blow, the light shifts and little, and the room gets colder and darker, before thunder and lightning come.” 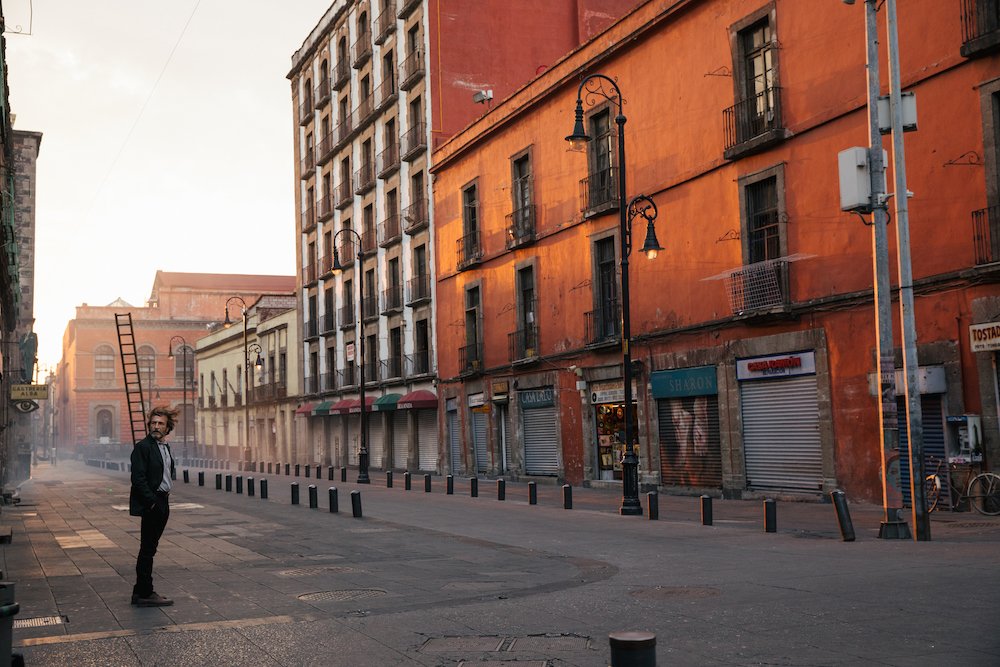 Watching the cinematography on Bardo unfold on the big screen, you get the distinct impression that Khondji really enjoyed working on this film.

“Yes, it was amazing, the most pleasurable shoot I’ve ever experienced with a truly inspiring director. It will be hard to have another one in my life like that,” he remarks. “Alejandro is like a composer and a conductor at the same time. He wants everyone around him to understand the music, to feel the music, to create a very strong connection. When you watch him, you realise that every single layer of the movie is controlled by Alejandro, and that’s what makes it a great operatic work.”

Colourist Damien Van Der Cruyssen said: “Working on the final colour for Bardo was an incredible creative experience, thanks to both Darius and Alejandro’s dedication to the process, and their desire to surpass what had already been accomplished on-set in-camera and near-set with colourist Gabriel Kolodny.

During the final DI, one of our main creative ideas centred on allowing the grade to breathe to complement the movement of the light, animated by the emotions of the scene. In many instances, light moves while the grade shifts to follow the unfolding of a scene. Meanwhile, the film had to maintain a subliminal and natural quality.

Accomplishing that balance through the grade, staying as filmic yet natural as possible, avoiding any over-the-top heaviness, while also keeping the visuals as stunning as possible, was our biggest challenge.

For the sequence shots, the complexity required rethinking how to approach the grade to realise the filmmakers’ vision, and I couldn’t have done it without the outstanding help and support from our Harbor team.