Working in close collaboration with his director, crew and the actors, Greek DP Thimios Bakatakis GSC has provided a showcase for the power of the static camera to depict the touching story about a fragile relationship in the third season of Netflix’s Emmy-winning and wryly-comedic Master Of None: Moments In Love. Using Kodak film as the sole capture medium, with unwavering style and a 4:3 frame, the camera never moves an inch in over four hours of engrossing TV drama.

Whilst the on-screen result has been widely-praised, Bakatakis had his reservations when he initially discussed the strict visual treatment at the outset of the project with director Aziz Ansari, who co-created the series with Alan Yang, and who also starred in first two seasons in the lead role of Dev. 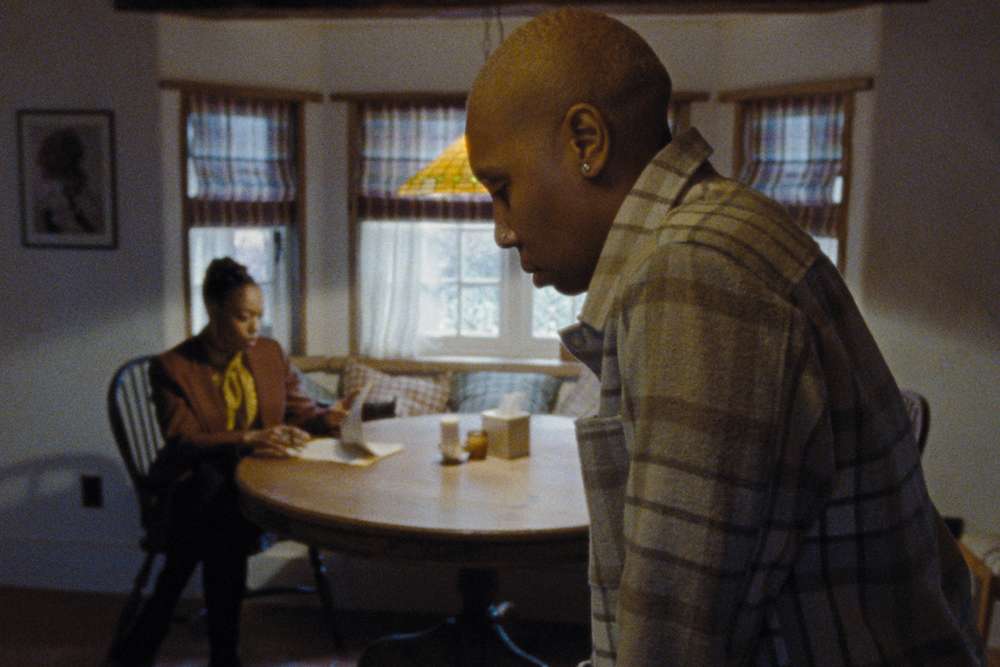 MASTER OF NONE (L to R) NAOMI ACKIE as ALICIA and LENA WAITHE as DENISE in episode 303 of MASTER OF NONE. Cr. COURTESY OF NETFLIX © 2021

As the cinematographer explains, “I actually wondered if it might end up being rather boring to watch, but I loved the self-contained, feature-like script and stood by Aziz’s decision not to move the camera at all, and not to shoot any cutaways or coverage either. He had a particular creative vision and wanted to do something natural and organic, something that was radically different from the first two seasons. It was certainly a challenge, but the production turned out to be a fun experience. Aziz’s judgement was good, and the result is very pleasing to me.” 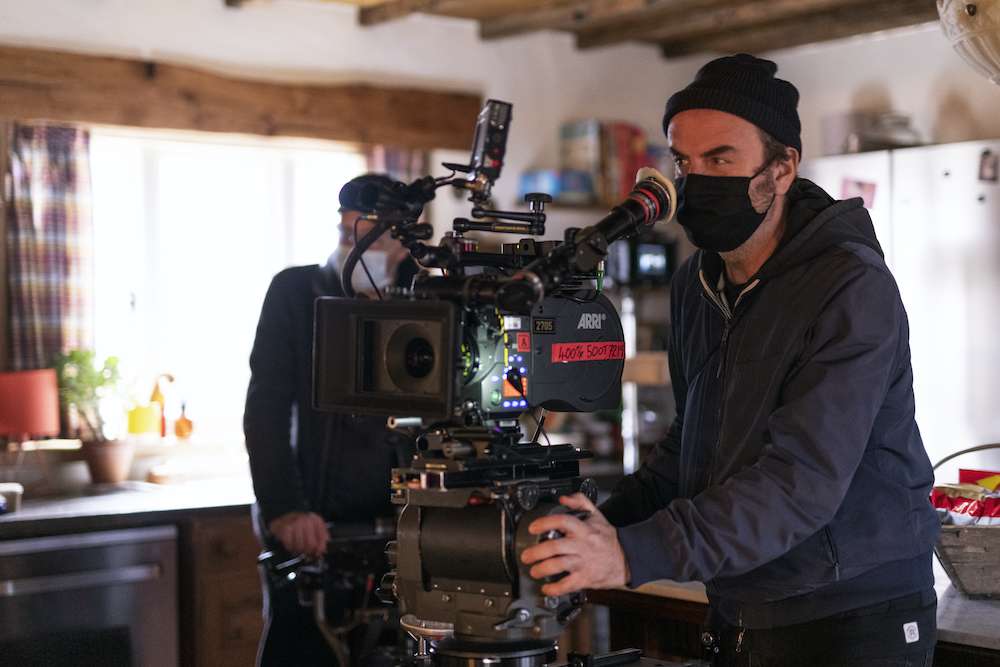 Previous seasons of the show, based around Ansari’s character Dev, were notable for a bustling NYC-style of energy in their visual make-up, with the camera being used to switch between characters for comedic purposes. In the show’s third season, however, the storytelling shifts towards of Dev’s best friend, lesbian novelist Denise (series co-writer Lena Waithe), and her unpredictable relationship with life-partner, Alicia (Naomi Ackie). Using a locked-off camera, careful compositions and lighting, the camera observes tableaux of the pair living what should be a life of domestic delight in a handsome upstate New York home, doing everyday chores such as folding the laundry and making dinner, until family affairs get in the way. 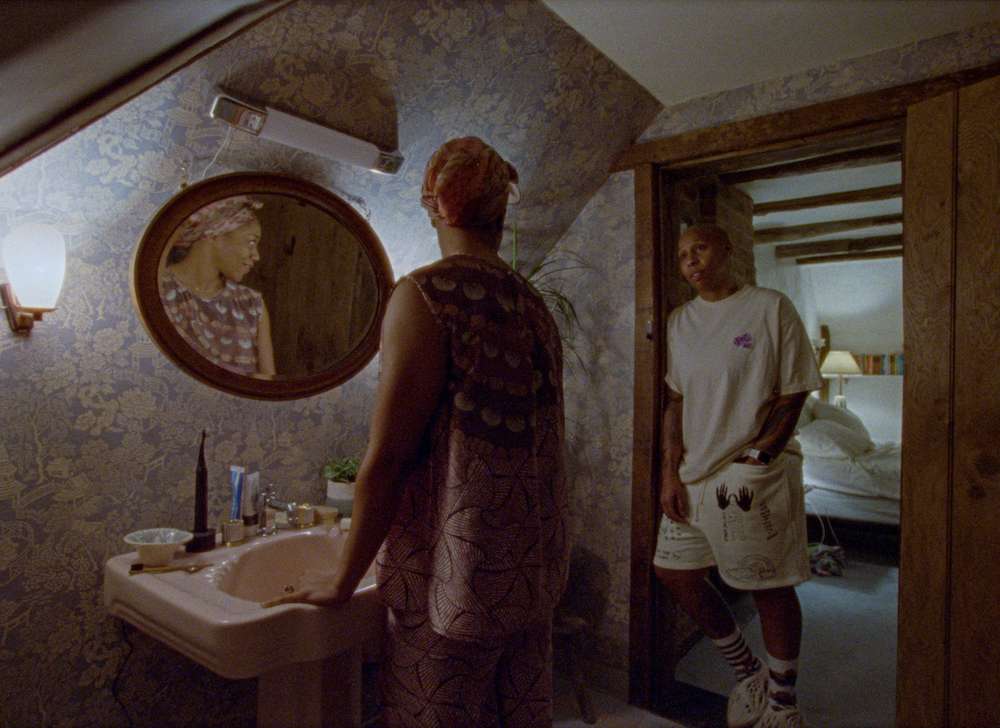 MASTER OF NONE S3 (L to R) NAOMI ACKIE as ALICIA and LENA WAITHE as DENISE in episode 301 of MASTER OF NONE. Cr. COURTESY OF NETFLIX © 2021

“Similarly, we always wanted the focus to be on the characters in our film, and the natural, raw performances from the actors,” says Bakatakis, who is known for his bold cinematography on feature films by Oscar-nominated Yorgos Lanthimos, such as Dogtooth (2009), The Lobster (2015) and The Killing Of A Sacred Deer (2017). 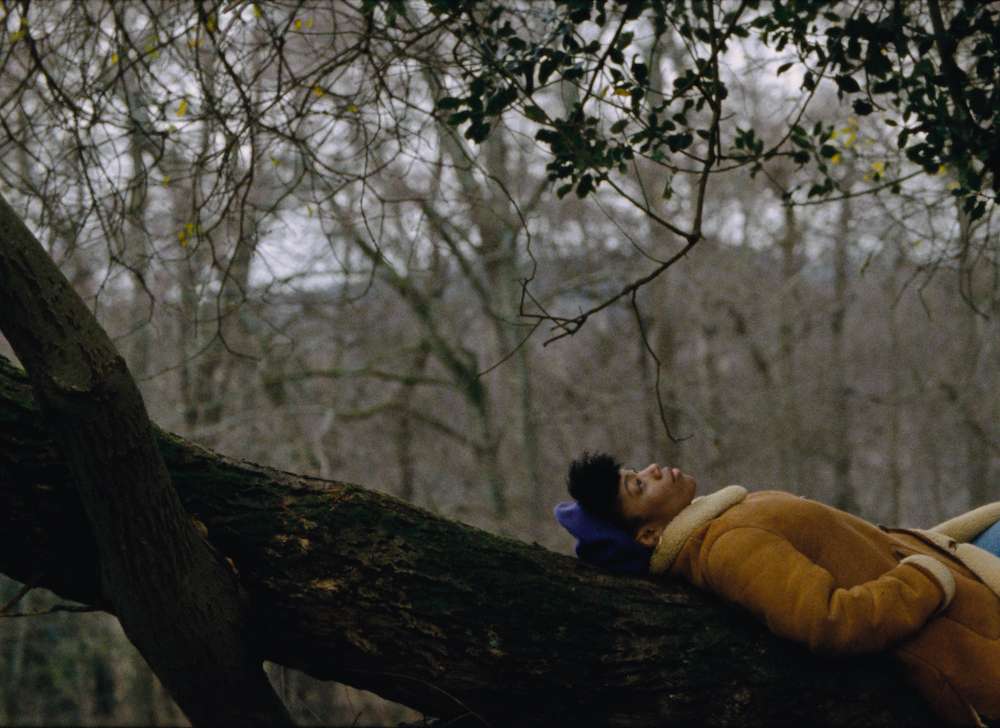 The DP admits to having never seen a single episode of Master Of None before Ansari called on him to lens season three. Although this was his first project with Ansari, Bakatakis had previously worked with production designer Amy Williams on the multi award-winning Keep The Lights On (2012, dir. Ira Sachs), a connection that would prove advantageously constructive.

Whilst the story happens in upstate New York, physical production actually took place in the UK, from October to December 2020, under safe-working protocols due the Covid pandemic, at locations around London. Multiple sets were also constructed in the cavernous ExCel convention centre, where all of show’s domestic interiors were filmed. When Williams was creating the marital home, Bakatakis asked her to construct the various sets closer to the dimensions of a real house. 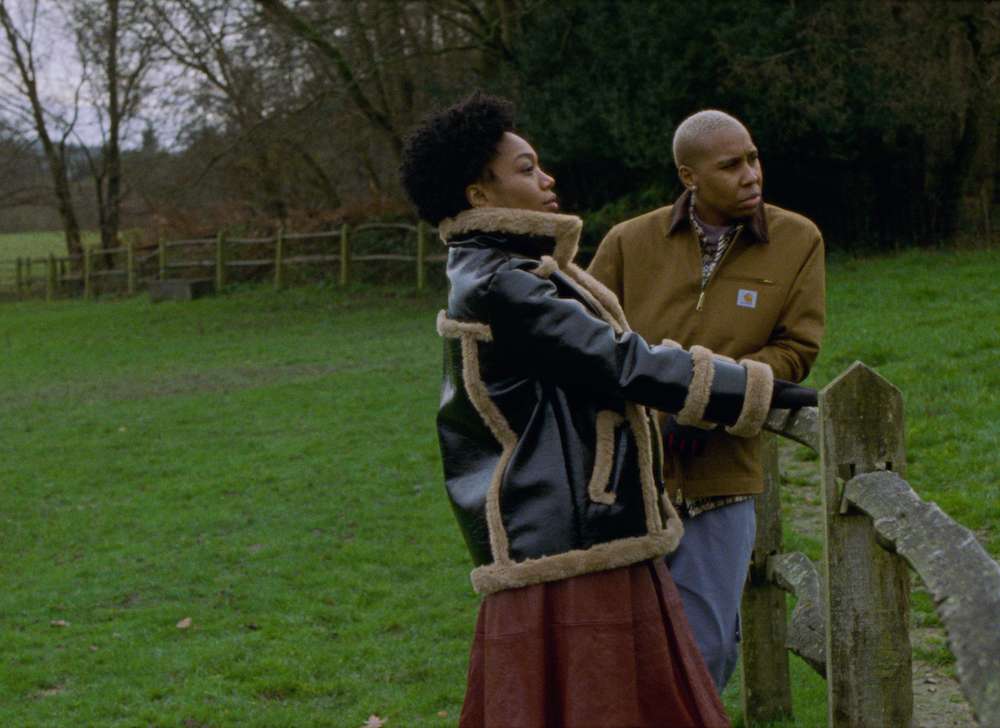 MASTER OF NONE S3 (L to R) LENA WAITHE as DENISE and NAOMI ACKIE as ALICIA in episode 305 of MASTER OF NONE. Cr. COURTESY OF NETFLIX © 2021

“Normally, when you shoot in a studio you have wider rooms and high ceilings to make things easier on a practical level for the cameras and lights,” he says. “But we wanted a very naturalistic setting and the low-ceiling really helped to give the impression that the action was going-on inside a real house. Even though we were making a high-end TV series, it also made us feel that we were working on a small, independent production. To give the home sets an appropriate atmosphere, I decided that the only lighting to be used indoors would come from practical lights, such as glowing table lamps. These were supplemented by exterior window lighting that was right for the time of day or the weather.”

The decision to film Master Of None: Moments In Love on celluloid film was made after Bakatakis was officially attached to the production. “It was a nice surprise for me to learn that this was a celluloid production. I really love shooting on film. There’s a softness to it, and the scenes you shoot feel like a painting,” he says. “I think the mystical quality of 16mm suited Aziz’s idea of bringing an organic feeling to the aesthetics. Also, film-originated productions just appear different to the digital productions out there, which all too often have the same sort of look.” 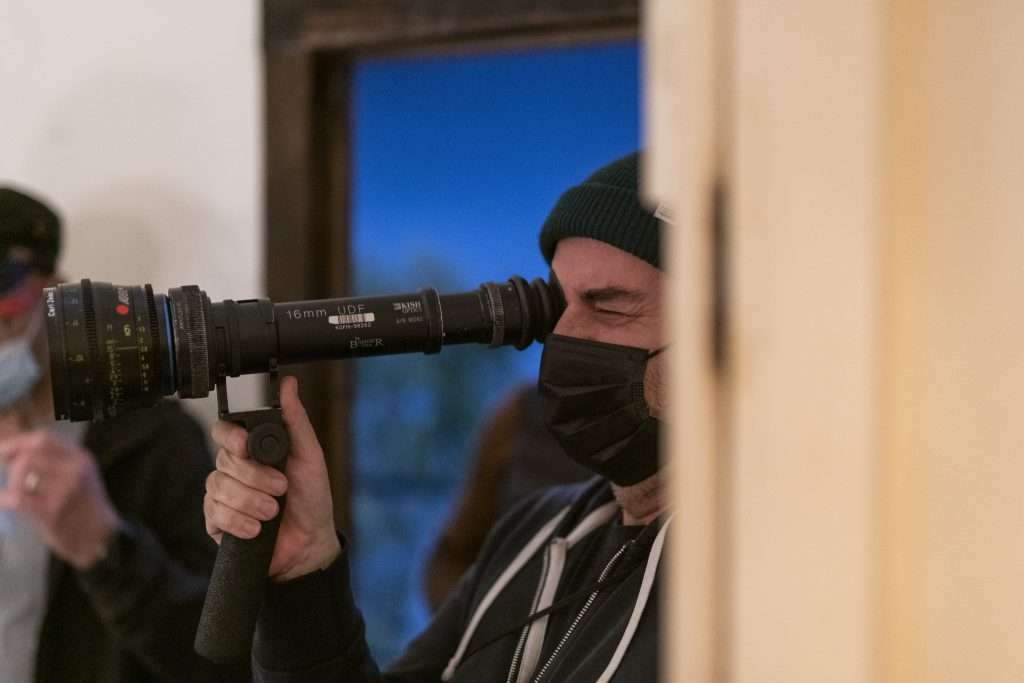 “The Ultra 16mm lenses are the perfect match with the ARRI 416 16mm camera, With their high speed of T1.3 they deliver impressive optical performance and colour balance, and helped to elevate the 16mm-filmed image to the highest quality that Aziz really loved.” 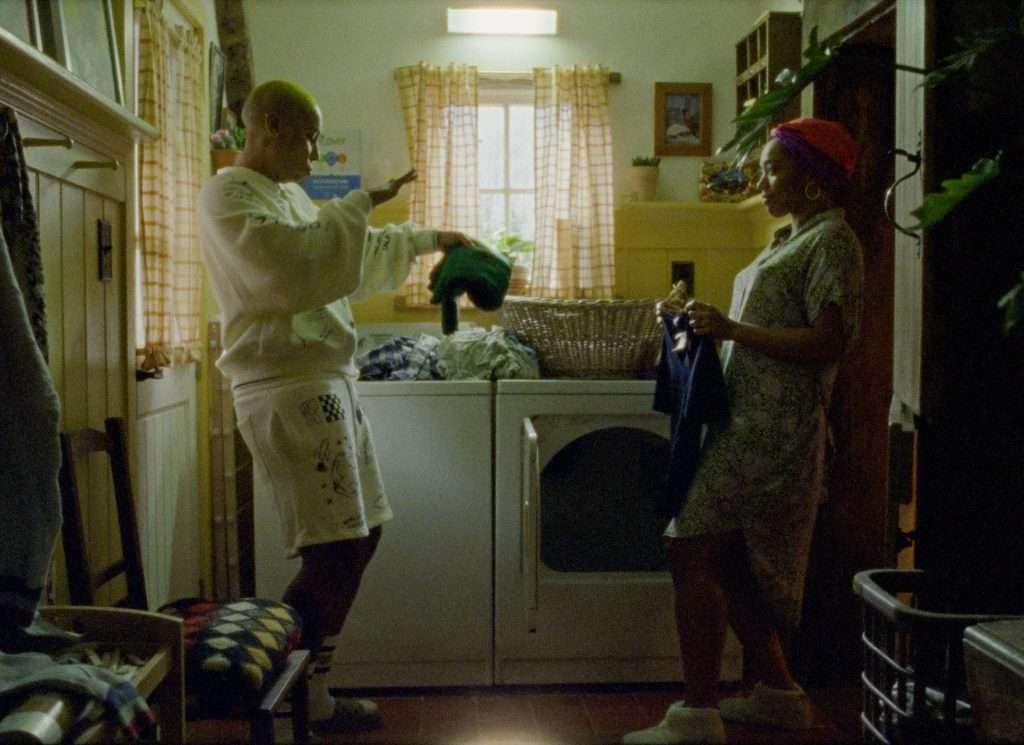 MASTER OF NONE S3 (L to R) LENA WAITHE as DENISE and NAOMI ACKIE as ALICIA in episode 301 of MASTER OF NONE. Cr. COURTESY OF NETFLIX © 2021

“Kodak’s Tungsten emulsions appeal to my eye, and shooting with the 500T and 200T means you have great latitude and flexibility across the range of super-low light or daylight scenes,” says Bakatakis. “The 16mm Tungsten stocks have lovely colour, contrast, grain and texture which combine to bring a certain naturalistic look to the image and the scanned/graded 2K dailies looked great.

“I used the 50D for daytime exteriors, because it is simply beautiful in 16mm format. There was never any doubt we would use it when saw the rich colourful results of tests we did in prep-production. Whichever stock we used, all costumes looked wonderful, with vivid colours and texture.”

Of course, Bakatakis’s key challenge was seeing through Ansari’s resolution to film each tableau with a static camera, while framing almost all of the action in single, wide shots.

“We had many long dialogue scenes and Aziz was very clear that there would be no close-ups, no coverage and just a locked-off camera,” he says. “So the camera placement, shot composition, lighting, costume and choreography of the actors within the frame, were all incredibly precise. There was nothing left to chance or accident. In order to let the actors feel like they were really living in the moment, Aziz let them decide how many times they wanted to perform each take. They were very well-prepared and sometimes we shot a scene in two or three takes, but often they got it in the first one.”

Bakatakis says that Ansari kept the mood upbeat during the socially-distanced production by constantly playing music that helped set the mood for a scene. He also sometimes made meals for the crew, conjuring-up chicken korma curry or various Italian dishes.

“Aziz created a lovely atmosphere for the cast and crew on-set, and made the whole experience very enjoyable,” he concludes. “Working 10-hour days, fully-masked, was a first-time thing for most of the crew, and it made things very unusual. Aziz’s decision to choose this particular film language was a risk, but it worked out, and was a great way to get this story across. I’m so happy ultimately that I did this project.”