Van Nelle Fabriek was very futuristic and pioneering for its time; it was built with concrete pillars instead of brickwork with steel and glass sides that provide abundant natural daylight to create different facilities for the employees’ comfort. Today, this historical building is being used by many companies as a shared co-working space.

“It is such a wonderful installation to share with the world. We wanted to deliver a realistic virtual experience for everyone who could never physically visit the facility,” says Marcel Knotter, 360o video developer at Panoptice.

When capturing 360o content, sometimes keeping a minimum distance between camera and objects can be problematic. Mistika Boutique allowed Panoptice to adjust every image and camera input in the Stitch Node, facilitating an optimal balance between sharpness and overlap. The software helped them to speed up the workflow, by allowing them to simply copy and paste stitching presets and other nodes to individual or multiple clips. 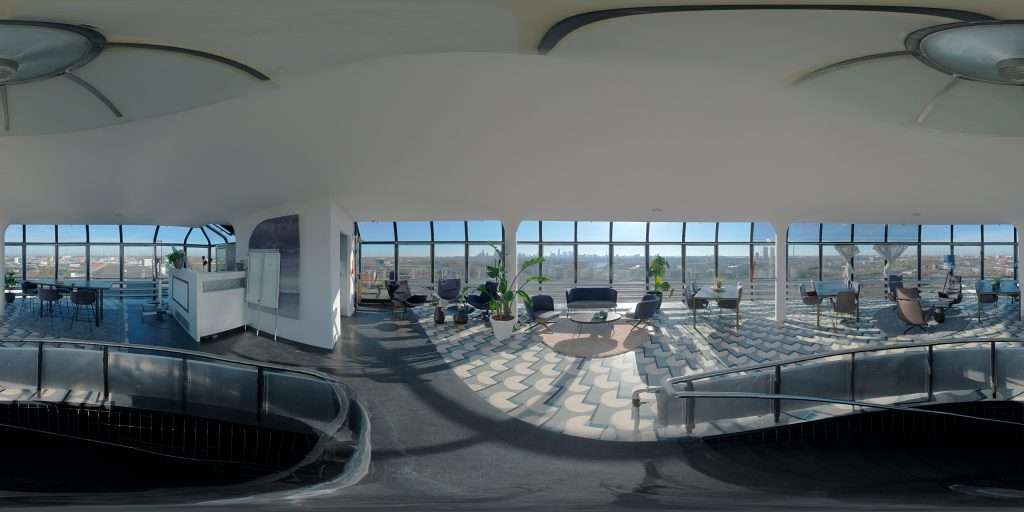 The VR Stitch and sharpen tools were used for improving the stitching of the images, and to add a nadir logo in the 360o shots. The creatives also used the keyframing feature to simulate virtual movement and make the stitches picture-perfect.

In addition, Mistika’s ability to add annotations was essential during the lockdown as it allowed them to make suggestions and easily switch between working from home and the office. Mistika Boutique’s unique infinite Timespace was also extremely useful for the project, facilitating the creation of multiple formats to match the output needed. “We used the same environment to export PNG files and H.265 for Social Media,” adds Knotter.

Automating the deliverables with Mistika Workflows

The main objective of the project was to immerse the viewer by capturing details in very high resolution. Despite the original heavy files, the team managed to ensure cross platform delivery by optimising the compression of the shots. “After the creative part was completed in Mistika Boutique, we deployed Mistika Workflows to take care of the rendering process. We used 8K and 20K resolution outputs, both stereoscopic and monoscopic,” says Knotter.

To fully automate this process, the team created render scripts in Mistika Boutique, saving both videos and photos in a dedicated Watch folder that was then automatically programmed to run at the end of the day. “This allowed me to liberate Mistika Boutique from rendering tasks and move forward with other creative steps. In the background Mistika Workflows was programmed to take care of the rest – rendering and direct delivery to clients’ FTPs,” concludes Marcel.