Since 1985, the Theaterhaus Stuttgart has brought together various artistic genres, experimental and popular productions, internationally renowned artists and newly developed projects under one roof. The Theaterhaus maintains its own theatre and dance ensemble and raises almost 65% of its annual costs itself. The figures speak for themselves: the Theaterhaus has around 300,000 visitors every year, with an average of 900 events ranging from theatre and dance to concerts, comedy and cabaret, readings, lectures and exhibitions.

Recently, the Gauthier Dance production performed by the Theaterhaus Stuttgart’s dance ensemble has attracted the most attention. For this, the in-house lighting team used Robert Juliat Dalis 860 8-colour mixing LED cyclights for the first time, as well as Dalis 862 tunable white LED footlights, all of which have recently become part of the Theaterhaus’ permanent lighting inventory.

The decision to go with the Dalis fixtures was made after an extensive shootout at the theatre with several manufacturers’ products. Wanja Wenzel, deputy technical manager at the Theaterhaus Stuttgart, was particularly impressed by the light quality and beam pattern of the asymmetrical 300W Dalis LED cyclights, which provide excellent illumination of the stage over its entire depth with very little spill. “For Gauthier Dance, the entire stage area is in play, for which we needed a horizontal luminaire that could illuminate a projection screen at a short distance in the best possible way.”

Indeed, the stage at Gauthier Dance is sparse and empty – only the dancers inhabit the 240m2 stage, which is bordered on three sides by simple configurable drapes. Aside from the dancers, only the Dalis 862 are present on stage, placed prominently yet barely perceptibly across the entire width at the stage’s downstage edge. “Although the Dalis units are aimed directly at the stage and dancers, they are not dazzled during their performance,” confirms Lukas Dethier, lighting technician at the Theaterhaus. Upstage of the curtains on the back wall is an Opera projection screen onto which a row of Dalis 860 is directed, providing flexible illumination of the stage backdrop. Thanks to the reflector geometry of the Dalis 860, no large distance between the fixtures and the opera screen is required to achieve a uniform, wide-area illumination. 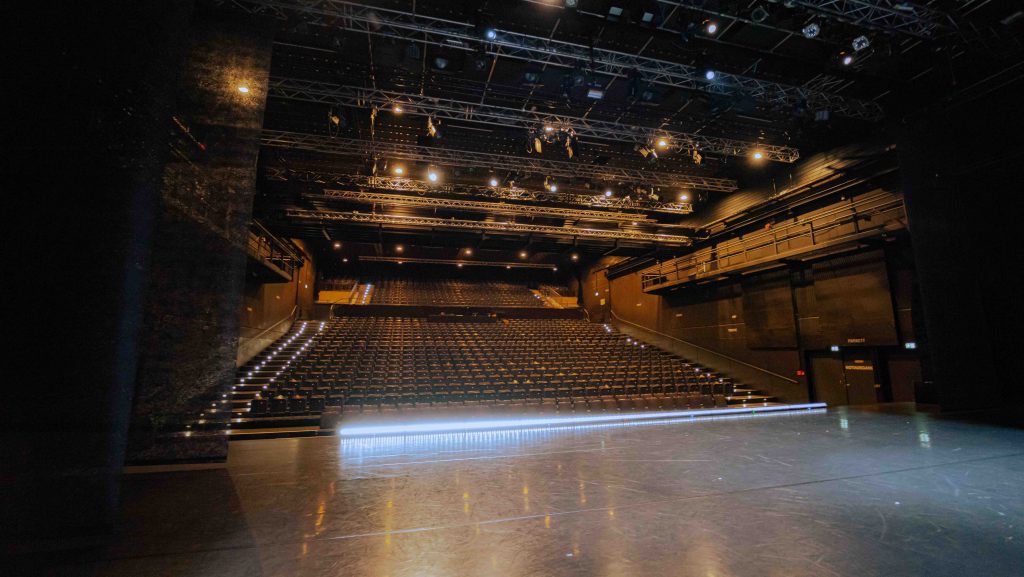 Lukas Dethier is also impressed by the luminous intensity of the Dalis luminaires. “A lot of light really comes out of the Dalis,” he says. “With the battens at the front of the stage edge, you can already see a lot at just 7% intensity.” The ease of switching between cool and warm white was another factor in choosing the Dalis 862 LED footlight, while the flexibility of the Dalis 860’s colours was also a distinct advantage. “Whereas in previous productions with halogen lights, the team had to make time-critical changes during breaks, the Dalis 8-colour LED system allows new settings and lighting patterns within a production at the touch of a button,” confirms Dethier.