Every member of Rosco’s Cube Family of LED fixtures has proven to be a fantastic choice for theatrical footlights. So far, we have shared how Braq Cubes are the footlights of Hadestown and how the Miro Cube 4CA fixtures were used as footlights for a new opera. To wrap up the series, we’re sharing how Lighting Designer and Rosco Ambassador Trey Brazeal used Rosco Pica Cubes as tiny footlights for a recent production of Little Shop Horrors.

Trey is a Chicago-based lighting designer who, like many designers and technicians around the world, is finally getting back to work after the COVID 19 pandemic. His first job back was lighting Little Shop of Horrors at Metropolis Performing Arts Center in Arlington Heights, Illinois. It was one of their first live productions too, and they staged it inside a large tent that they had erected nearby. 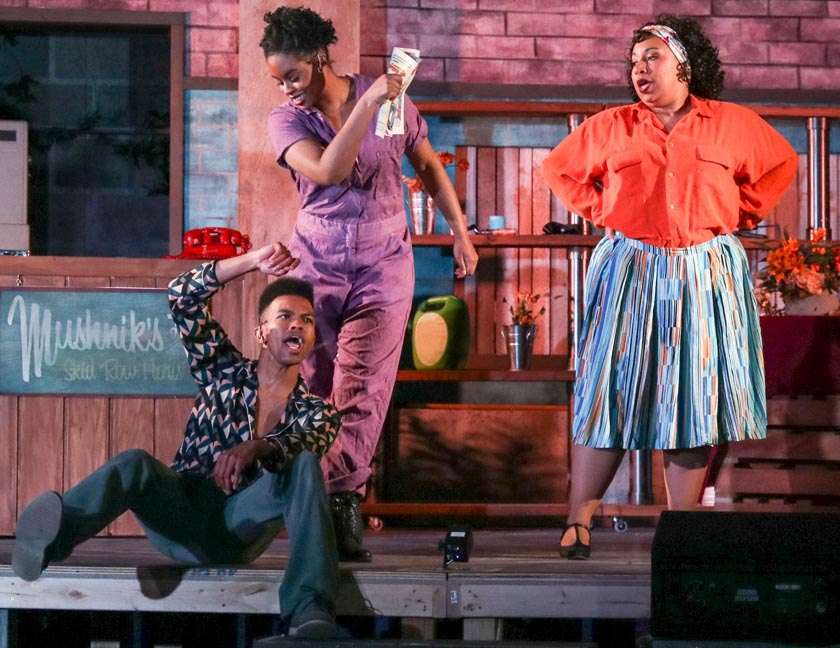 Due to the size of the stage, Trey knew he would only have room for tiny footlights.

Because this show has some dark undertones to it, Trey felt that creating those uplit “footlight shadows” would be essential. He also knew that the stage area inside the tent would be incredibly limited, so whatever footlights he chose would need to have a very small footprint. Trey had seen how Rosco Cubes were popular as footlights, so he visited the website and discovered the 2.5” x 2.5” Pica Cubes.

Testing out the footlight shadow effects of the Pica Cubes in rehearsal.

Trey installed a mix of the variable color temperature Pica Cube WNC and the RGBW Pica Cube 4Cfixtures on the front of his stage. Each Pica Cube ships with a 20°, 40°, and 60° lens. He was pleased to discover that, despite their size, the tiny footlights packed some punch! The bright output allowed Trey to install the 60° lens on the footlights, which provided him with a large enough beam-spread to cover the entire stage area. 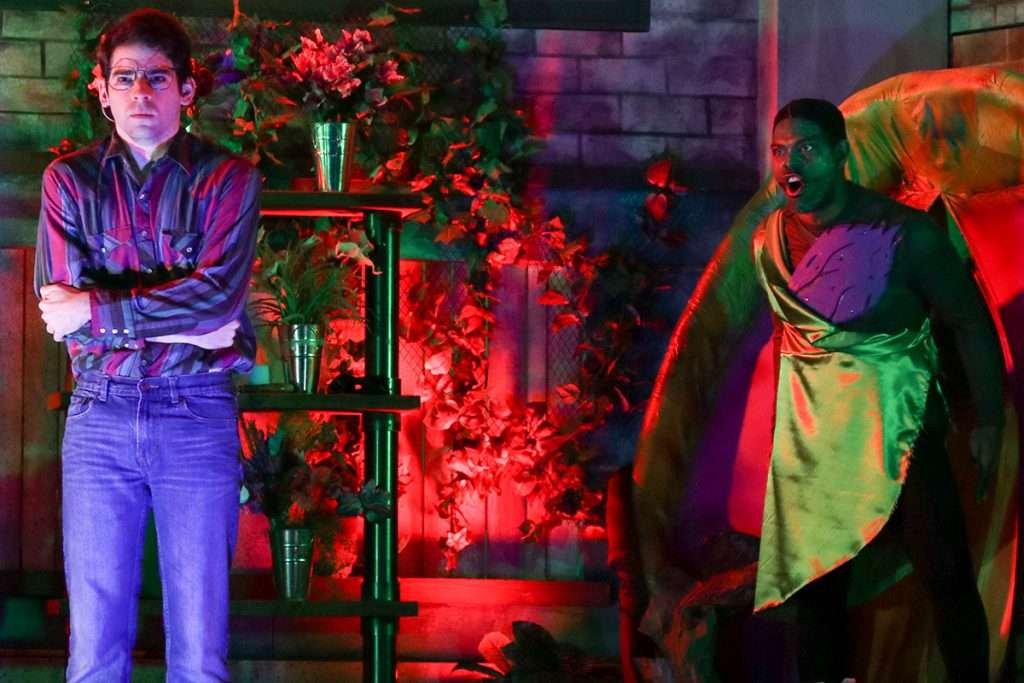 Once they were installed, Trey noted how the Pica Cube footlights “mixed wonderfully together to give a rich and well-rounded look to the action on stage.” In particular, he noted how well they worked during the moments where the voice of Audrey II was ringing through the mind of Seymour. “They created this haunting glow for me that brought out the idea of the plant controlling all situations, even when it was not present onstage.”

After closing night, Trey reported back to us that “the Pica Cubes were the right kind of lights to emphasize the dark underbelly that is this show.” He shared how they were plenty bright enough to provide him with the lighting effect he needed, but tiny enough not to obstruct the performers or the aesthetic of the set design. “I would absolutely recommend this product to any designer, whether they be used as footlights or a hidden window light.”

Watch this video to learn more about Lighting Designer Trey Brazeal and his design for Little Shop of Horrors at Metropolis Performing Arts Center.

Trey Brazeal is a recent graduate from Illinois State University’s School of Theatre and Dance with an MFA in Lighting Design. If you’d like to see some examples of his work, you can visit his website: tbrazealdesigns.com, or follow @treybrazealdesigns on Instagram.

If you’d like to learn more about the Pica Cubes that Trey used in this production of Little Shop of Horrors, please explore our Cube Family Product Page. There you can learn about ALL of our Rosco Cube LED lights and find the right fixture for your project.