The edge of extinction

Dan O’Neill is a British wildlife documentary presenter, filmmaker, and biologist with an insatiable love for adventure and wildlife conservation. He has travelled to the world’s most remote regions in search of critically endangered species from the Bengal tigers of India, jaguars and eagles in the deepest parts of the South American rainforests and the Langurs of South-East Asia. His documentary films seek to raise awareness of how to stop wildlife crime.

Plight of the Eagle

The rugged, remote, and mountainous rainforest of the Philippines is home to one of the world’s most majestic creatures; it’s also one of the most critically endangered. Standing up to 3ft tall and with a 7ft wingspan, the great Philippine eagle, or monkey-eating eagle is an awe-inspiring sight. But with fewer than 400 breeding pairs left in the wild, found on just four islands, it is the rarest eagle on earth and it’s in a fight for survival.

Joining the fight, UK biologist, filmmaker and adventurer, Dan O’Neill, journeyed to Davao to help the Philippine Eagle Foundation (PEF) raise awareness of the race against time to preserve their national bird. In his documentary film, Queen of Birds, Dan travels to the island nation of dense forests and craggy cliffs to tell the story of the rarest of raptors. Lightweight equipment with rock steady stability and ready to roll in seconds was essential. To meet the challenge, Dan relied on his Sachtler flowtech aktiv8 system to ensure that his Sony FS7 was ready to capture the breath-taking moment when an Eagle soars.

Dan has a long pedigree in wildlife activism and preservation. After completing a zoology degree, he became a research biologist deep inside the jungles of Guyana before travelling throughout Vietnam and southeast Asia to tackle illegal wildlife trade. Completing an MA in Wildlife Filmmaking led him to South America on a hunt to spot harpy eagles. That sparked his interest in documenting the planet’s rarest animals including jaguars, tapirs, giant river otters, tigers, wolves and, most recently, the elusive snow leopards of Kyrgyzstan. 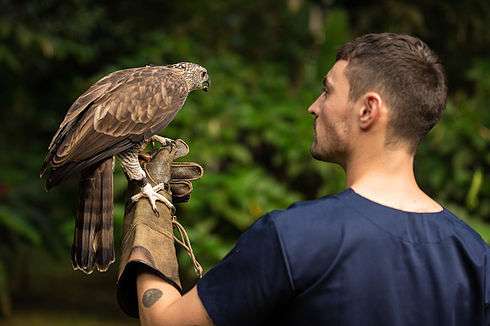 Knowing that the Philippine eagle was high on Dan’s list, ‘Raptor Aid’ founder, Jimmi Hill, introduced him to Jayson Ibanez, PEF director of research and conservation who was visiting London and had a fascinating story to tell. “They had miraculously rescued a young female Philippine eagle from the ocean,” says Dan. “Driven out of her territory into an area with no thermal currents she had plummeted into the sea. Fortunately, two fishers plucked her out of the ocean and brought her to shore – they named her ‘Maasim’. Starving and exhausted she went on an incredible journey, changing hands several times before eventually being taken to the Philippine Eagle Foundation.” The staff at PEF devised a plan to rehabilitate her so they could release her back into the wild.

“As a filmmaker, to hear such an incredible story about the rarest of birds – the most endangered eagle on the planet – was so exciting,” says Dan, “I built a narrative around this one bird and set out to the Philippines with camera operator Ben Harris to tell her story.” Sometimes, even the best laid plans take an unexpected turn. As Dan’s film shows, while en route to the Philippines, Maasim’s story takes a twist that significantly impacts the entire project. Thinking fast and employing the best principals of guerrilla filmmaking Dan makes changes on the fly to preserve the positive intent of the film. 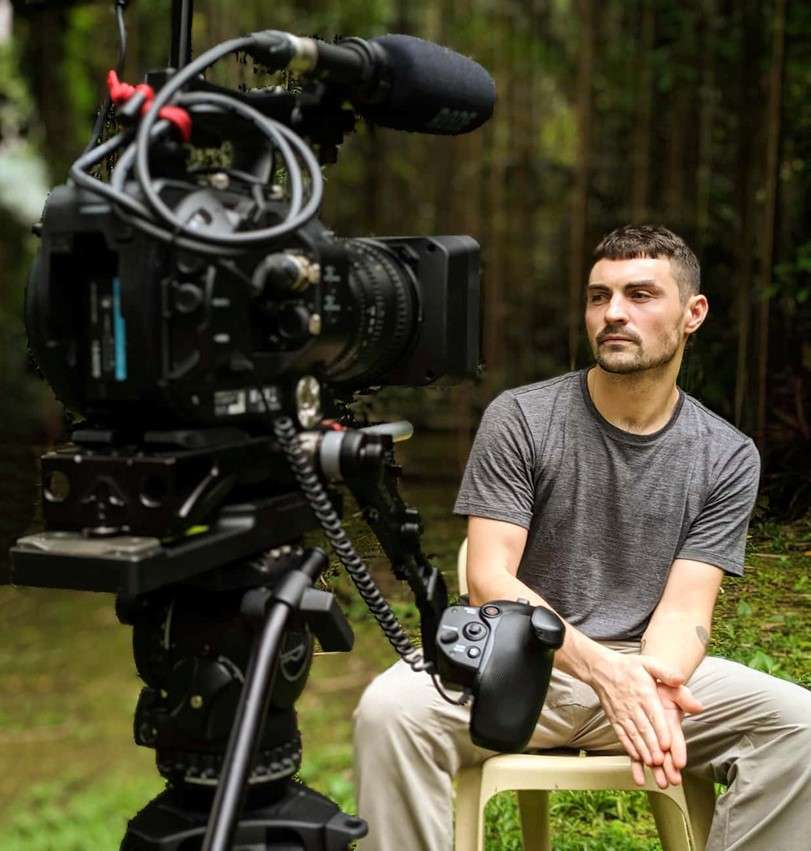 Fast on foot wildlife filmmaking typically means lightweight gear, but unlike some solo filmmakers Dan doesn’t use a DSLR or mirrorless system. To capture the highest quality images, he shoots with a Sony FS7, a 600mm lens and 1.4x extender. Using a larger camera means lightweight and speed are critical requirements from everything else on his gear list. “Using fully a rigged camera like the FS7 weighing up to 7kg on your own can be a challenge,” says Dan, “wildlife moves fast, often when I spot an animal within seconds it’s gone, so any equipment that allows me to get my camera into the perfect position quicker is a massive bonus.”

Using a Sachtler flowtech75 tripod combined with an aktiv8 fluid head – able to support a payload of up to 12kg – meant that Dan could set up sturdy camera support in seconds. “The flowtech aktiv system can support my FS7 with the 1.4X extender and 600mm lens and it is still just a smooth to pan as if I was using a 35mm, that’s absolutely brilliant,” he says. The Sachtler drag system ensures smooth starts and soft stops, “With other systems I have used, there is a little juddering which is infuriating because you can’t fix that in post; but aktiv is just so smooth, so perfect.” The unique design of the aktiv head allowed Dan to achieve a greater variety of shots in the shortest time. “Because there is no tie-down I can lower the tripod right down to the ground for extreme low-angle shots, I can also set the tripod really high and know from below that it is absolutely level because of the illuminated PrismBubble.

Into the Red Zone

To stand the best chance of capturing a rare shot of an eagle in flight, Dan and Ben ventured on a covert trek into an area known as The Red Zone, a mountainous area known to harbour rebel political groups. “This was the best place that we would have a chance of being able to see the eagle soar,” says Dan. “We hiked up the mountain in the dark, camped overnight and woke up at first light to see if we could spot an eagle. We only had a brief period to find the bird, film it, get out of the area before it became too dangerous to be there”.

The best viewing points for Dan to film the eagle were precariously perched on the edge of the mountain. “There were just three small viewing points where we could see through the trees,” says Dan, “we couldn’t move the camera and lens mounted on the tripod into each position quickly enough to capture the shot, but with the flowtech aktiv system we could snap the camera off, move the tripod and snap it back into position so we could move between the three positions in about three seconds.” 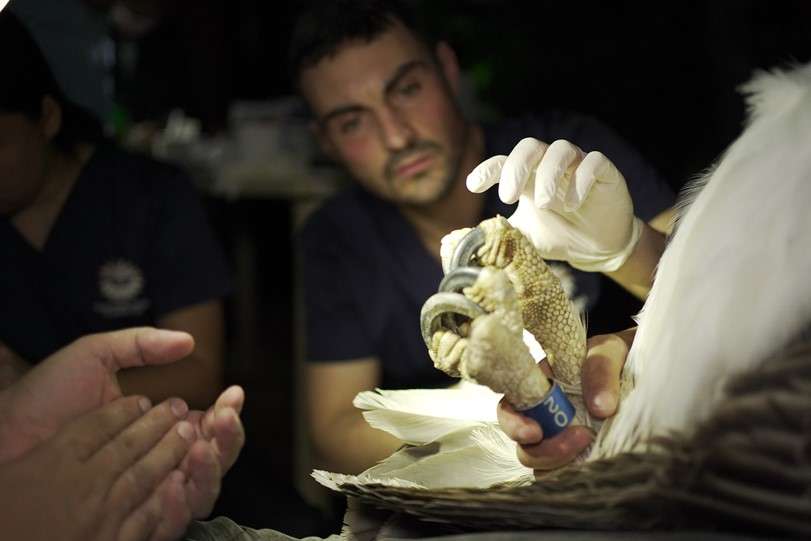 Once in the best location, Dan could quickly adjust the length of each leg independently without leaving the camera position or taking his eye off the action. “flowtech is the most useful tripod I have ever used,” he says, “If I’m on the side of a mountain holding my camera, I can decide where the legs go from that position, so much safer when I’m on the edge of a precipice than leaning down to adjust each leg. I move around a lot and I always want to get different perspectives, flowtech is perfect for that, with other tripods it just takes so long to move the legs and put it into a different position that I end up just using the middle ground shot and never change it”.

Once in a lifetime

Confidence in his equipment allows Dan to push boundaries and capture breath-taking images that people would otherwise never see. “I wanted a beautiful slow smooth pan across the sky to capture the majesty of the eagle in flight and with aktiv that is exactly what I got,” he says. “This was a onetime situation, literally see it, get the camera into position, level it, find the bird in the middle of the trees and follow it across the sky. It was over in seconds, so it was being able to move the tripod quickly and quickly level the camera that allowed me the capture the shot I needed. The flowtech aktiv system is so simple, I don’t know why other tripod systems have to be so complicated. I wouldn’t go back now.”