When I originally spoke with cinematographer Fabian Wagner BSC ASC in 2017 to discuss the process of shooting director Zack Snyder’s Warner Bros. film, Justice League, he had not yet seen the final product. At the time, just as the film was originally releasing, Wagner knew there would be material in the movie he had not been involved with. That’s because Snyder ended up stepping away from the film before it was finished, due to the tragic suicide of his daughter, and Joss Whedon finished up at the helm. Wagner was likewise not involved in Whedon’s reshoots, due to a scheduling conflict, and so, his original participation essentially ended when Snyder’s did.

Nevertheless, Wagner was not prepared for what he saw when he eventually screened the movie – the fact that it contained, by his estimation, “maybe only 10-percent of the original material that we had shot” during the course of 125 days of principal photography, which mostly took place between April and October 2016 at Warner Bros. Studios, Leavesden, as well as locations around London, Los Angeles and in Djúpavík in the Westfjords, Iceland. 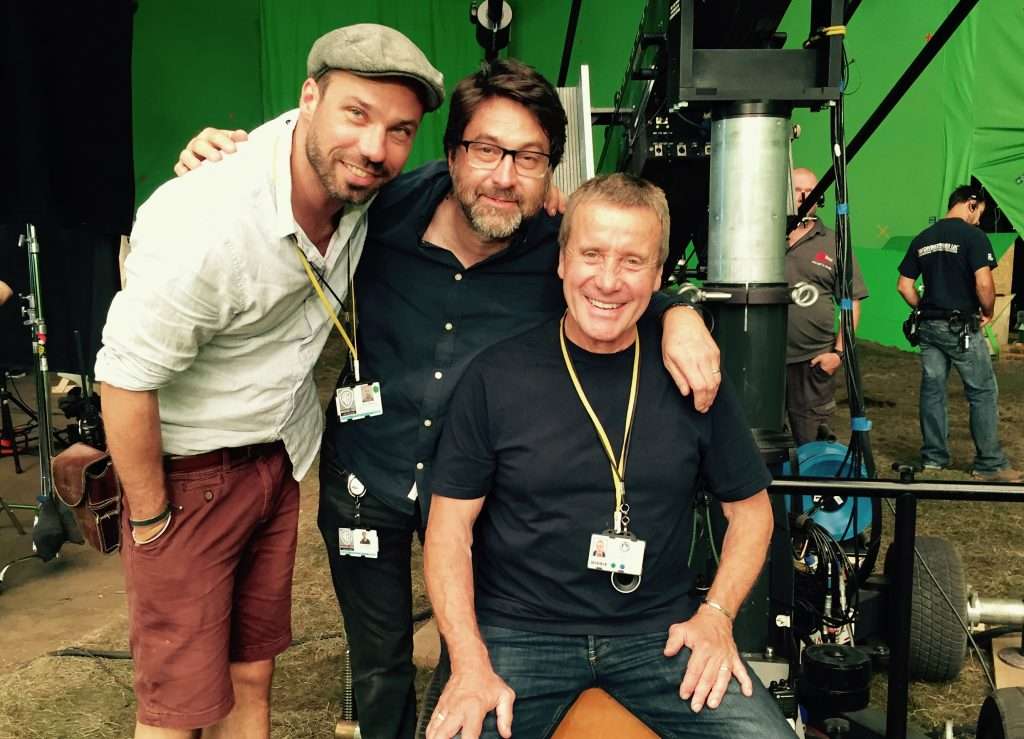 There has been a great deal of publicity recently about the epic fan movement that took hold to essentially demand a second go-round of the superhero saga, focussed this time on Snyder’s original vision for the project. Lo and behold, and quite surprisingly, that effort eventually paid off. Snyder’s re-edited and re-constituted version of the film – checking in at four hours and two minutes – has now been widely distributed on HBO Max in the US and on a series of pay services in Europe, including Sky TV and Now, amongst others. An IMAX version has also seen limited theatrical release in certain territories, with more screenings on the way as Covid restrictions ease-up around the world.

Zack Snyder’s Justice League is a far different movie and includes virtually all of the key footage that Snyder and Wagner manufactured back in 2016, but none of the “new” footage that Whedon substituted for the original theatrical release. Snyder has widely discussed in recent days how important it was to him to get this rare opportunity to present fans with the movie he had envisioned and planned on making five years ago. But, after Snyder, there is likely no person more relieved and satisfied to see the new version claw its way off Snyder’s laptop and into people’s homes and onto IMAX screens than Fabian Wagner. 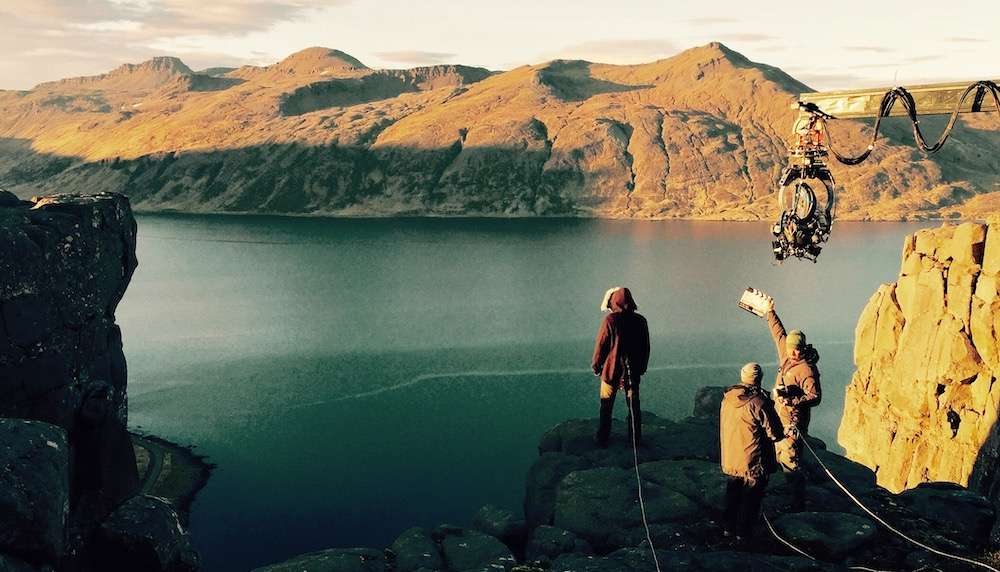 Tethered for safety on location in Iceland

The DP made that point very clear when I recently caught up with him to get his reaction to finally experiencing the motion picture he actually shot seeing the light of day some five years after he completed principal photography.

“Back in 2016, we shot every single thing that you see in the new release apart from the final epilogue sequence featuring Batman confronting the Joker,” Wagner explains. “That epilogue was shot by Zack himself during a three-day shoot in Los Angeles using digital cameras (the Red Monstro camera with Canon lenses). I found it sad watching the movie in 2017, having not been involved in the reshoots, and I was very disappointed. Whether you like Zack’s filmmaking or not, it was disappointing purely from the fact that it was not remotely the movie that Zack intended to make.

“For me, it was a dream come true to work with Zack to begin with, since he is such a visual director. But to know the things you shot, the way you shot them, the way you lit them, and to then see the whole thing turned into something totally different, was really disappointing from my perspective. And I was more disappointed for Zack, who already had to go through something far worse with his family tragedy on top of all this. 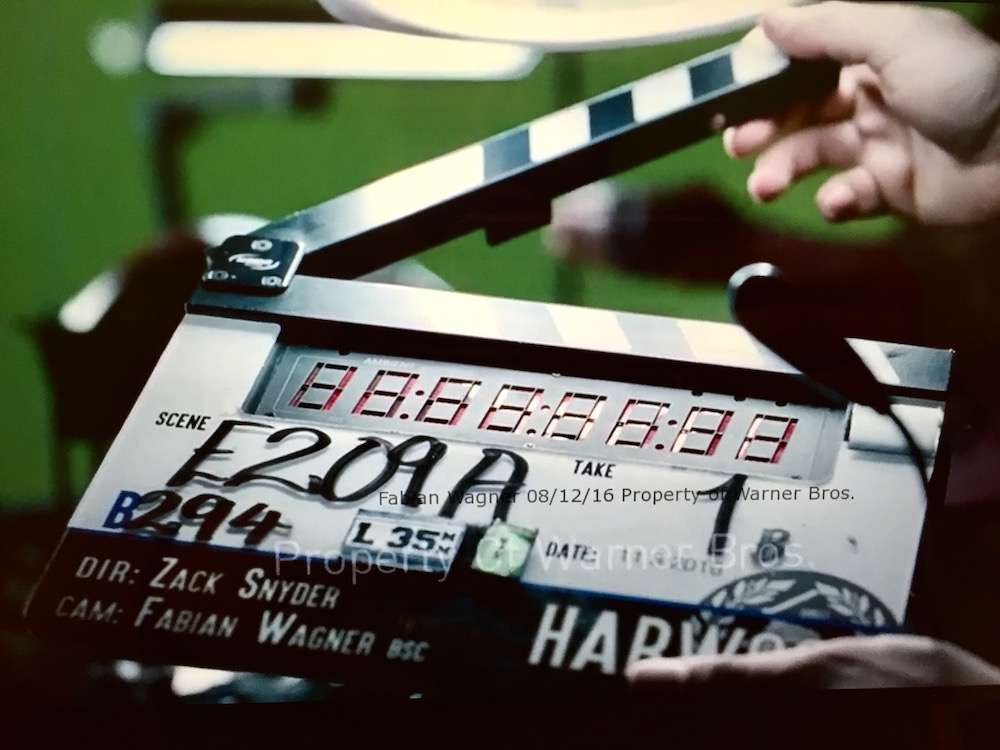 “Zack and I spoke after that version came out, and he told me all about his own cut, how he had the whole movie on his laptop. We never expected to get a chance to see it widely distributed to fans, of course. But thanks to the fan movement, they created such a storm, that it suddenly became possible, and I’m very glad about that. It’s a more interesting film now – a Zack Snyder film – and it’s what we intended when we shot the movie to begin with.”

Wagner, however, emphasises that the new – or more accurately – the originally intended version of the movie did not require much new work on his part. Rather, it finally gives his original work from 2016 its proper due, at long last. 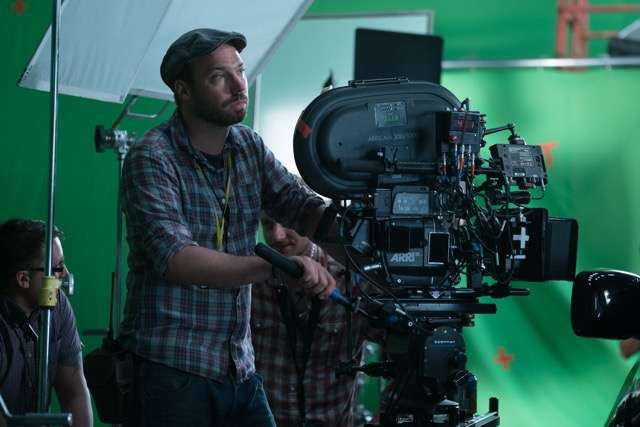 DP Fabian Wagner BSC ASC at the camera during production in 2016. BTS photos by Clay Enos.

“To be perfectly honest, I wasn’t that involved this time,” he says. “Zack and I stayed in touch over the years about it. He had his cut for a long time. The only thing the new version of the movie needed was new and additional visual effects, sound, the epilogue, all those kinds of things. Our original colourist at Company 3, Stefan Sonnenfeld, was still the colourist. He did the original trailers that Zack created before he stepped away from the original film – we all worked on those together. So, we already knew what the film would look like, and what the style was going to be.

“I spoke to Zack, who was planning a three-day shoot in Los Angeles to capture footage for the epilogue. I have been in the UK, and we both agreed that me travelling to Los Angeles for just a couple days of shooting – considering all the travel restrictions and quarantines that were going on due to the pandemic – wasn’t the right thing to do. 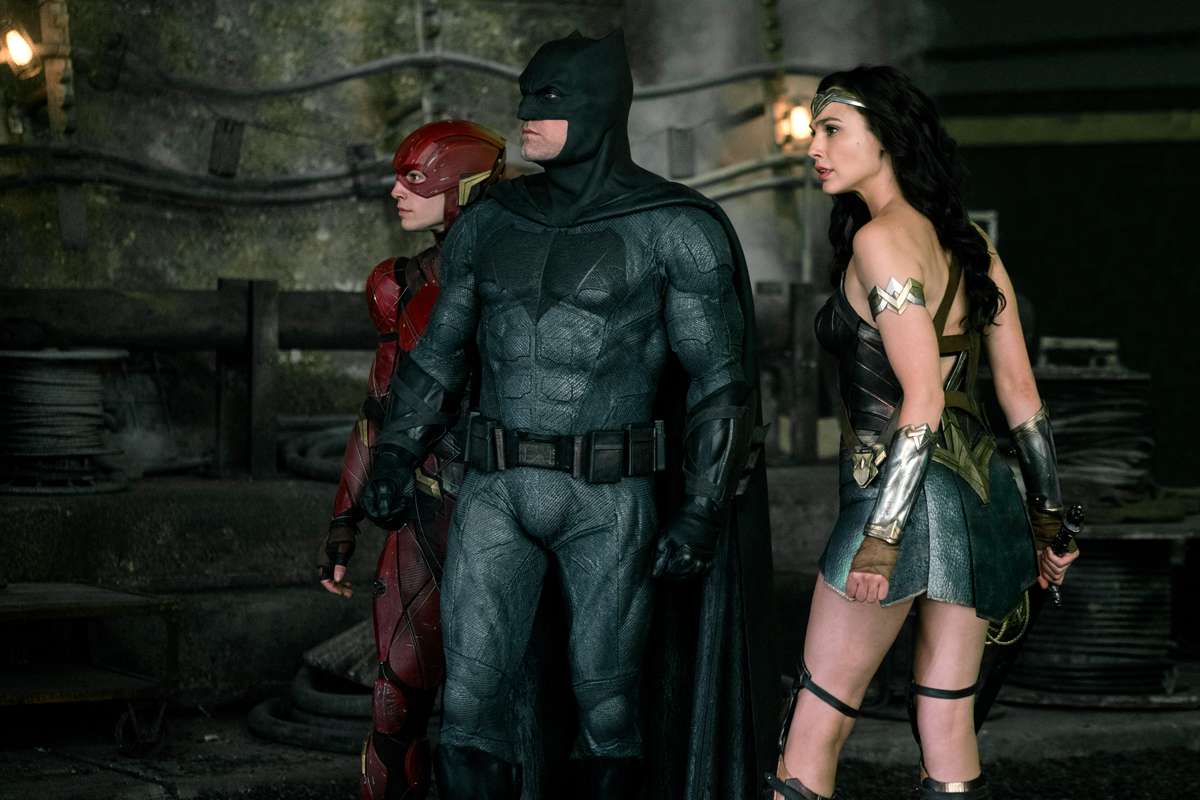 “So, Zack handled that shoot at the back-end of last year, and I consulted with him when it was finished. And then, we had a couple more phone calls here and there, both with him and with Stefan about the colour, and that was pretty much it on my end. There was no reason for me to get more involved, because we already had set our look and weren’t planning to make any major changes.”

As a result, with the exception of the epilogue and a handful of helicopter shots captured in 2016 using the ARRI Alexa 65 large-format camera, Zack Snyder’s Justice League is a film-originated production. It was captured in 4-perf 35mm on Kodak Vision3 stock that year, using ARRIFLEX 435 and 235 film cameras, supplied along with Leitz Summilux-C lenses, by Panavision in London. 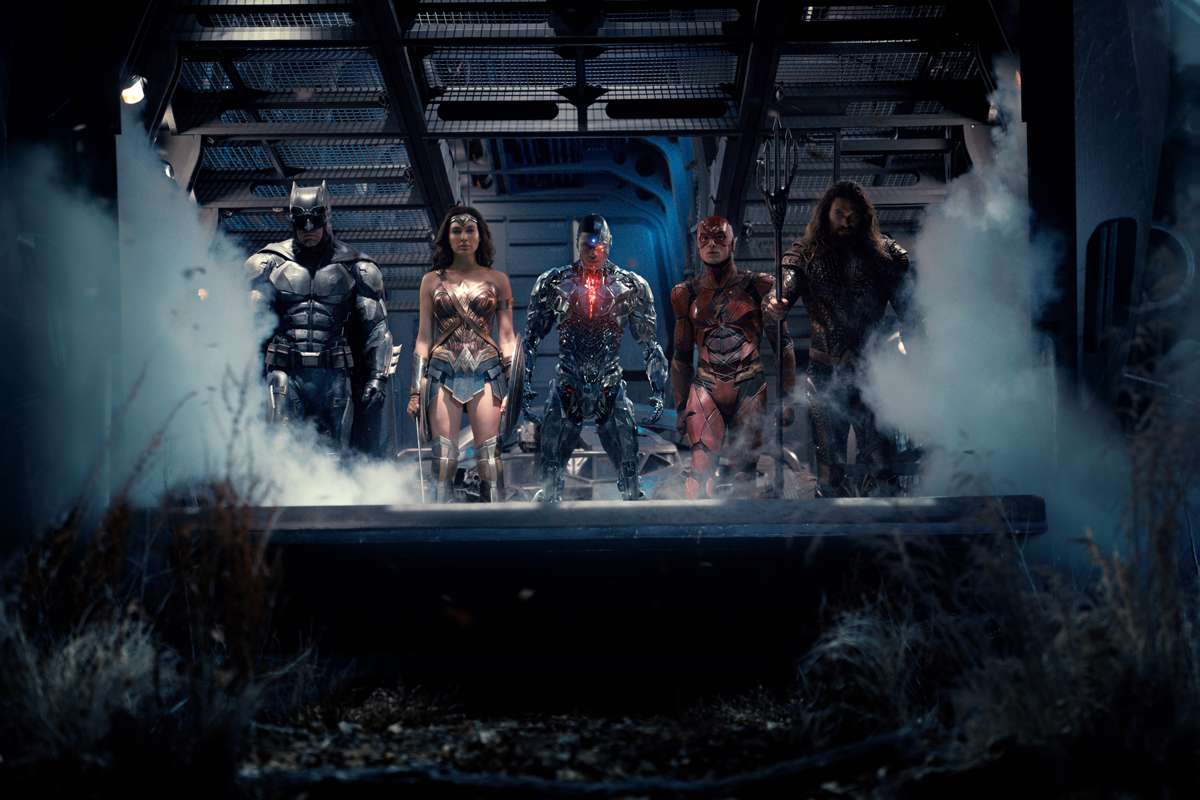 The big difference in the visual presentation from 2017’s theatrical release, however, is a change in aspect ratio. Whilst the 2017 film was presented in cinemas in the 1.78:1 Anamorphic format, the reconstituted version of the film is presented in the 1.33:1, or 4×3, format – something highly unusual for a modern, VFX-intensive superhero movie.

But even there, Wagner emphasises, the new film’s aspect ratio is what Snyder and Wagner originally intended before they departed the project five years ago.

“We talked about the aspect ratio very early-on, from our first or second meeting years ago,” Wagner says. “We always talked about it as a 4×3 film. Zack always wanted to do an IMAX version, giving you that fully-immersive feeling. And therefore, we shot the whole movie in 35mm, all full open gate. We captured the full 4×3 frame – that’s what we shot, that’s what we framed for and protected for.

“When I saw the theatrical cut, they just cut the top and bottom to make it fit the obviously more widely common 1.78:1 aspect ratio for that version. But Zack never wanted to show it that way. The plan was always to shoot the full frame. I think this format really clicked and helped us emphasise the characters and their superpowers.” 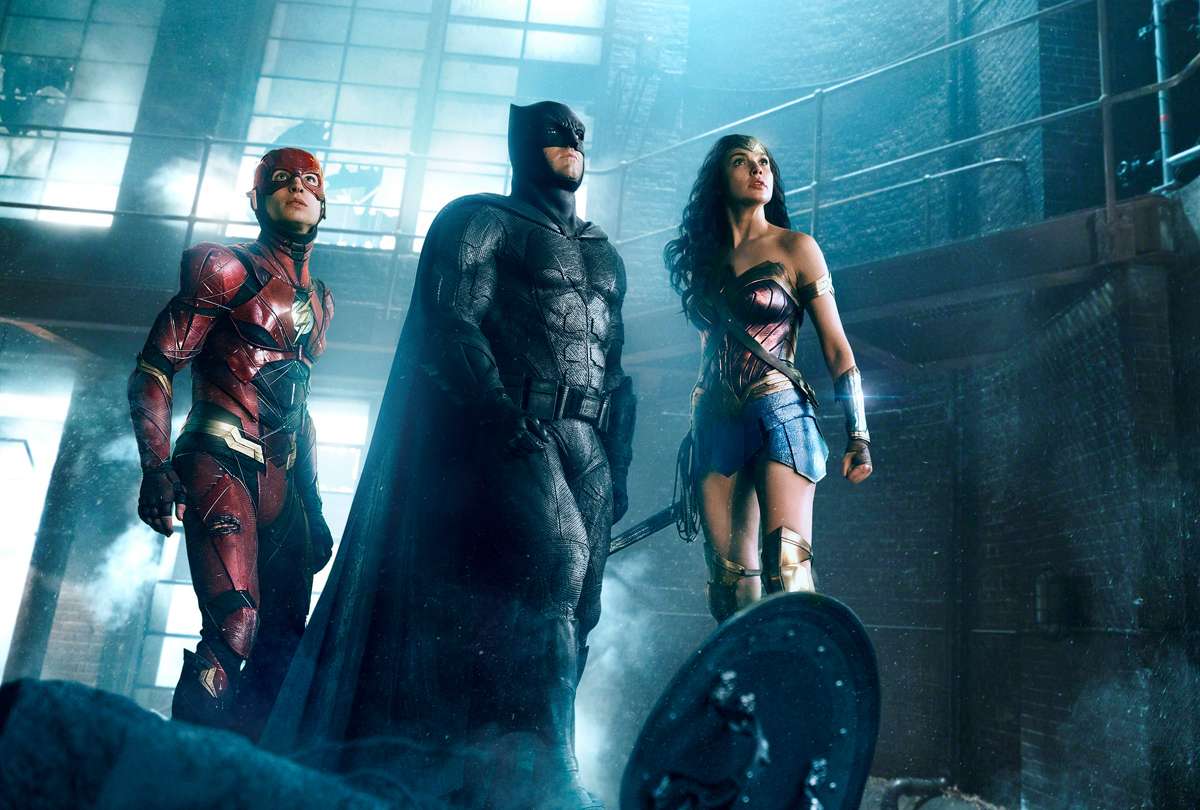 And so, in total, the new release has only a few minutes of newly-shot material in it, in addition to an aggressive reconfiguring of the film’s visual effects – over 2,000 new shots have reportedly been added. And the few minutes of new material shot for the epilogue by Snyder himself was largely sewn together with imagery from the three-day Los Angeles shoot while strictly adhering to Covid safety protocols, and simultaneous pieces that Snyder directed over Zoom in order to include actor Ezra Miller (as The Flash), who was in London shooting Fantastic Beasts at the time. Stylised VFX and colour grading techniques were then used to transform it into the so-called “Knightmare” sequence that closes the movie. 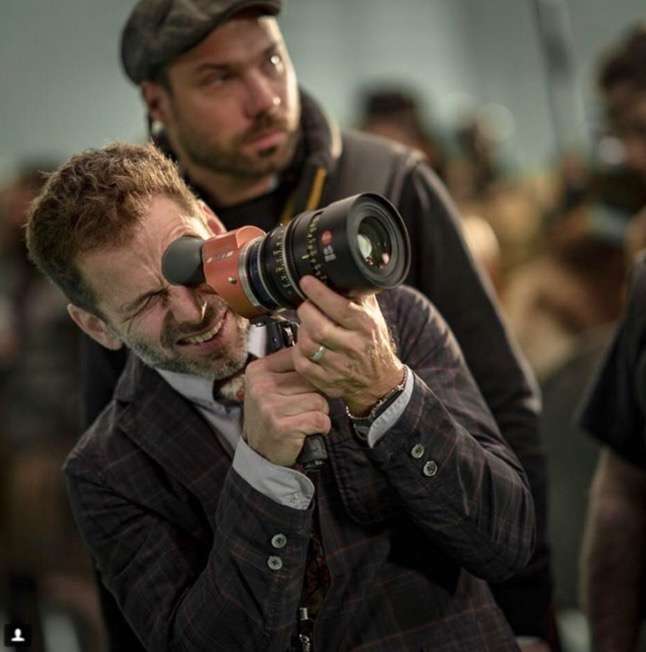 Although he wasn’t involved in that finishing shoot, Wagner emphasises that simply seeing the original effort finally brought to what for him, Snyder, millions of fans and many critics, is a satisfying conclusion, has been both gratifying and educational. Indeed, the cinematographer highlights that the five-year journey to finally release Snyder’s version of the movie has reinforced for him one crucial lesson, in particular. That is the notion that a filmmaker’s creative intent must be respected and honoured, above all other things.

“Zack is one of those polarising directors whose style people either love or hate, but he is edgy and he has his own particular style,” Wagner says. “Studios and executives have always interfered with things in certain cases, usually because they believe it would be more financially-viable to do so, or whatever other reasons they have. But the point is that directors like Zack always create something new, and that has to be respected. Personally, I think it is very important that the integrity of a director’s vision should be kept intact and honoured.”