“Whenever you get one of Martin’s scripts, it’s like opening an early Christmas present – it’s always a great read,” recalls British DP Ben Davis BSC upon receiving The Banshees Of Inisherin from director Martin McDonagh, for whom the cinematographer had previously shot Seven Psychopaths (2012) and Three Billboards Outside Ebbing, Missouri (2017). 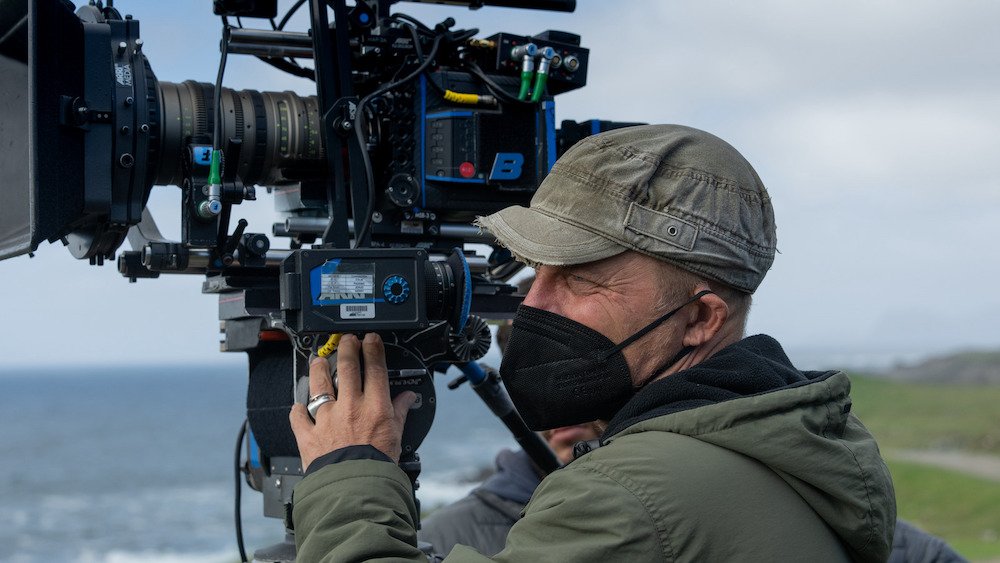 “Amongst the comedy, much of it pitch-black, surrounding the conflict between the main characters, I was actually surprised at how devastatingly sad this story was and thought it worked well as a tragedy, a parable about the stubbornness of men and their inability to communicate with one another, much to their own detriment.”

Examining existential themes of loneliness, anger and mental health, the film is set on a small, remote island, off the western coast of Ireland during the Irish Civil War (1922-23). As shells and bullets explode on the mainland, Pádraic (Colin Farrell) is devastated when his buddy Colm (Brendan Gleeson) announces an abrupt end to their lifelong friendship, preferring to play the fiddle and ruminate on Mozart alone in his bohemian home, than going to the pub for a convivial pint or two of stout together.

With help from his sister Siobhán (Kerry Condon), and Dominic (Barry Keoghan) a troubled young islander, Pádraic sets out to repair their damaged relationship. However, Colm’s resolve to part ways only strengthens, and he declares that if Pádraic won’t leave him in peace, he will take a pair of garden shears and snip off his own fingers, one-by-one.

Production on the film was originally scheduled for 2020, but due to the spread of the Covid pandemic in Eire, filming was postponed for a year. Principal photography got underway in August 2021, on the remote islands of Inishmore, the largest of the Aran Islands in Galway Bay, and Achill, which lies off County Mayo, before wrapping two months later in October.

“It’s incredible there, and I was definitely seduced by the natural beauty of the coast and the seascapes,” says Davis. “During the initial scouts to find our locations back in 2020 we – Martin, myself, our production designer, Mark Tildesley, and Peter Kohn, our first assistant director – were quarantined for ten days together in a house on the Galway Coast.

“This gave us the opportunity to watch a lot of movies that we thought were relevant – like Night Of The Hunter (1955, dir. Charles Laughton, DP Stanley Cotrez ASC), The Assassination Of Jesse James By The Coward Robert Ford (dir. Andrew Dominik, DP Sir Roger Deakins CBE BSC ASC), plus some classic John Ford Westerns too, as there’s an element of gunslinging to Pádraic and Colm’s various stand-offs. 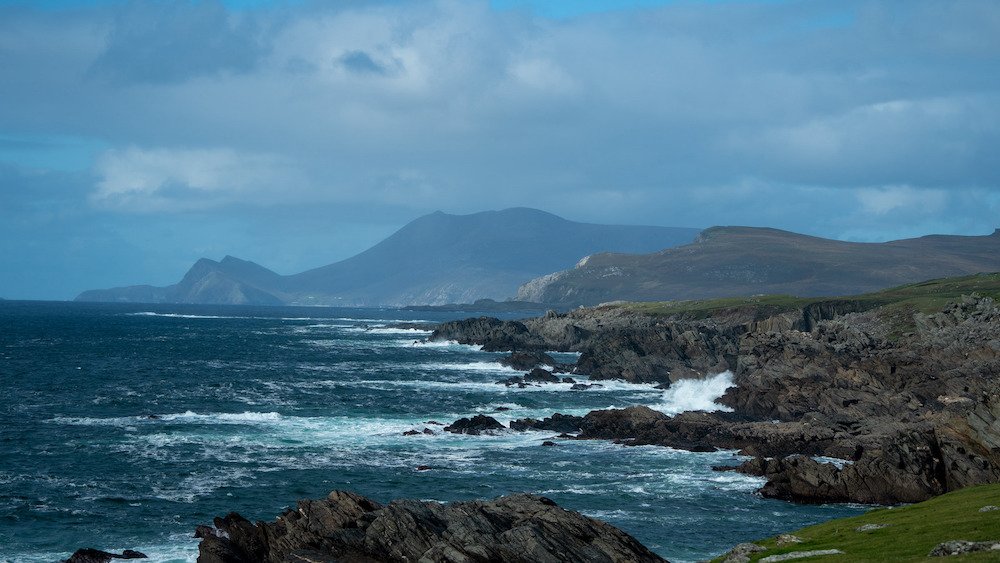 “We also went through the script in minute detail, looking at Martin’s storyboards scene-by-scene, beat-by-beat, of how we wanted to shoot the story. It became apparent that there would be a lot of looking through doorways and windows, and shots of people stepping over thresholds, coming-in and going-out of the three main settings, Pádraic and Colm’s houses and the local pub. And it became abundantly clear that the usual approach of shooting location exteriors, followed by studio builds, was simply not going to work on a practical level.

“All of our favourite locations were on the windward, Atlantic-facing side of the islands, but there were not many buildings there for obvious reasons. So we made the decision early-on to construct interior/exterior sets at our principal locations – Pádraic’s house and the pub were full builds, Colm’s was a conversion of a derelict dwelling built in the 1970s.

“Obviously, building those sets on the coast came with a certain amount of risk and difficulty because they are so exposed to ferocious elements. But we were lucky when we shot as it turned out to be a glorious summer, although there were a few occasions when the wind blew so hard we couldn’t open the doors on the trucks.”

Due chiefly to the restricted confines of the interior sets, Davis went with ARRI Alexa Mini LF cameras. He selected Signature Prime lenses for their optical precision on landscapes, as well as their ability to handle hard backlight on exterior shots, and yield warm, smooth skin tones, especially more gently-lit interiors. The camera package was supplied from ARRI Rental in London, under the supervision of Simon Surtees.

“A lot of the film was going to be played in closer shots with several different characters, and I really wanted to give Martin the dynamic ability to cut from the contours of a landscape to the contours of a face. Shallow depth-of-field with rapid fall-off would have felt far too contrived, so we shot the close-ups, often with lots of negative fill and a deeper stop, around T5.6, to bring a three-dimensionality to faces, and the Signature Primes delivered that very well, especially on Colm, where the key was to convey his air of melancholy.

“When we shot, I wanted the image to have a cinematic texture and subtle halation to soften some of the harder edges, but digital grain and other image manipulation effects never really look convincing to me. So, I gained the agreement of Martin and our producers to support the addition of real film grain to the overall image.”

Accordingly, down the line during post production at Goldcrest Post Production, this was achieved by employing the technique of shooting the selected takes to celluloid and then scanning the film negative into the digital realm ready for the final DI grade.

“I went with a fine-grained film negative, because I didn’t want the effect to become too overpowering, but did want the analogue softening it brings to the digital image, and I really liked the result.”

Along with admitting to falling in love with the remote locations, Davis says the logistics of working there made his experience an enjoyable challenge.

“The only way of getting equipment on to the islands was via small roll-on/roll-off ferries, so there was no way we could have brought large trucks stuffed full of kit, big cranes for big camera moves, cherry-pickers for the lights, not even regular generators. Many of the roads and tracks at our locations were surrounded by stone walls, so things were tight and restricted equipment-wise. We used a DJI Ronin to shoot a lot of the walk-and-talk sequences, or had the camera on the dolly and tracks with a small telescopic arm. It felt like I was revisiting my filmmaking roots and having to making the best of limited resources.” 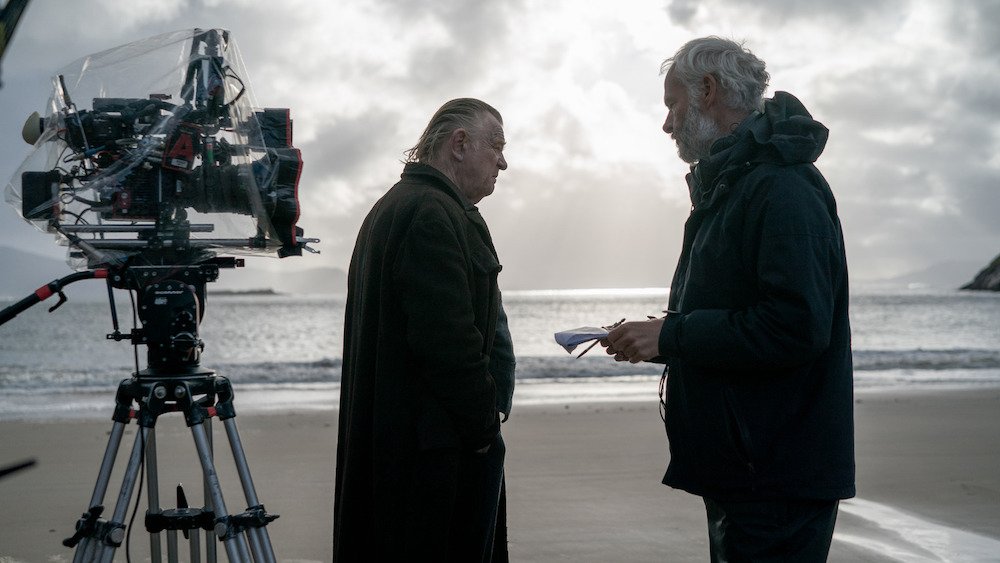 The shoot was a two-camera affair in the main, with Des Whelan ACO on A-camera and DJI Ronin, assisted by Tim Morris on focus, and Davis himself framing on B-camera supported by 1st AC Louise MacEllin. Davis also packed his own Blackmagic URSA 12K Pro camera, which he took on frequent trips into the wilds out of his own curious fascination most days, and some of that footage made it to the final cut. The key grip was Keith Smith.

Anthony Bagley worked as the DIT, although Davis resisted the temptation to do much by the way of on-set grading, preferring to review balanced and QC’d dailies done by Darren Rae from Cinelab, who worked in a makeshift suite near-set. The dailies were then delivered to the editorial team, before the selected takes found their way to Davis’s regular colourist Adam Glasman at Goldcrest Post. 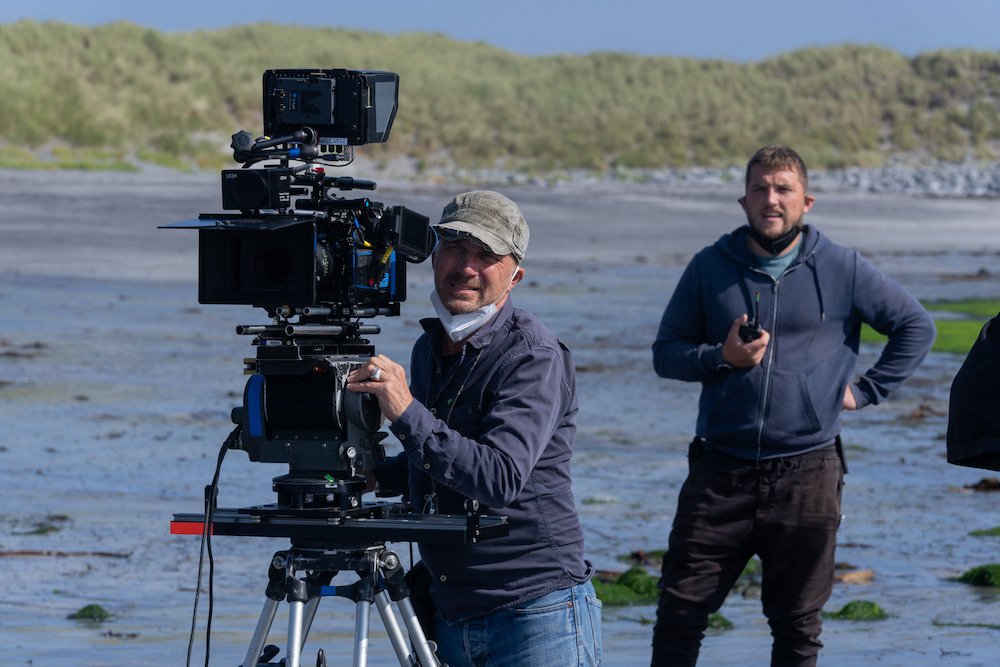 A further key player on the crew was gaffer, Onkar Narang, who, for want of a proper lighting desk, proved expert in rigging-up the limited selection of lighting instruments to individual dimmers – including directional incandescents to emulate fire and candlelight on interiors, and ARRI HMI’s firing-in shafts of light from outside. As there were no cherry pickers or genie booms to help lift lights upwards to illuminate the larger nighttime scenes, Narang also oversaw the construction of suitable scaffold towers, making sure things were kept safe in the frequently gusty conditions. 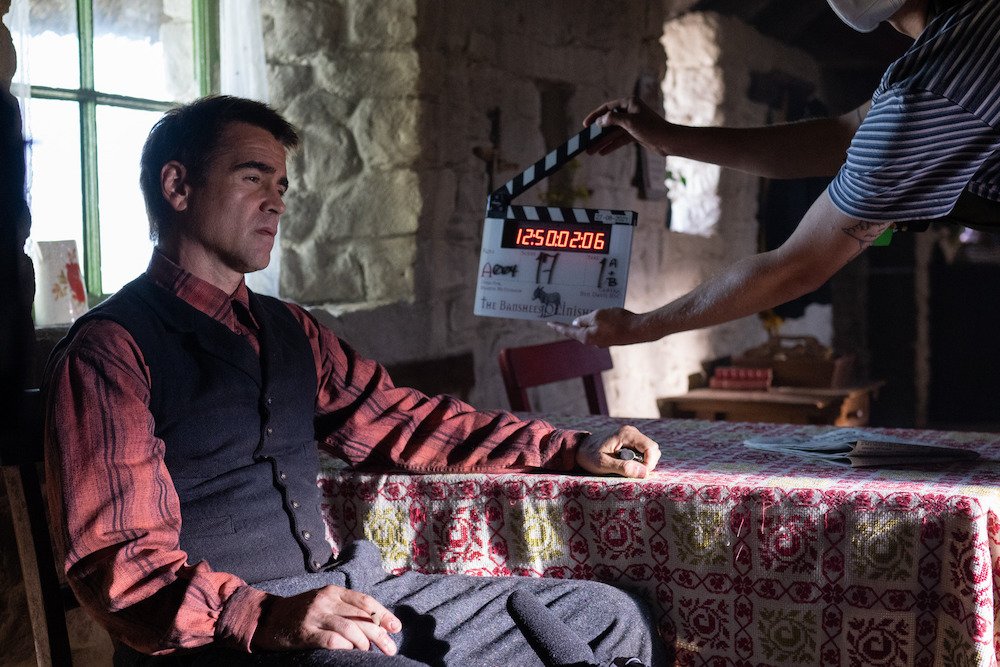 “When you are on a tiny island, out in the elements for long periods of time, you really want to spend your time with people you really like, because otherwise you’re probably going to want to kill them,” Davis remarks. “Onkar is the most charming and lovely person you could ever wish to meet, with one of the best can-do attitudes you could ever come across, and he was perfect for this job.”

The pub proved one of the most challenging sets to light, as Davis explains. “We decided early-on that the interior would have a black ceiling and dark green walls, as that gave us the chance to separate the characters, especially the faces, from the background. But we had to work out how to deliver enough light to achieve the T5.6 aperture I wanted.

“So we supplemented the obvious hanging practicals and firelight to create pockets of light, using Dedolight 300s screwed to the ceiling beams, and various small LEDs hidden in cervices and behind furniture. For some scenes, where there were multiple characters, we might have had 20 or 30 different fixtures dotted around the place.” 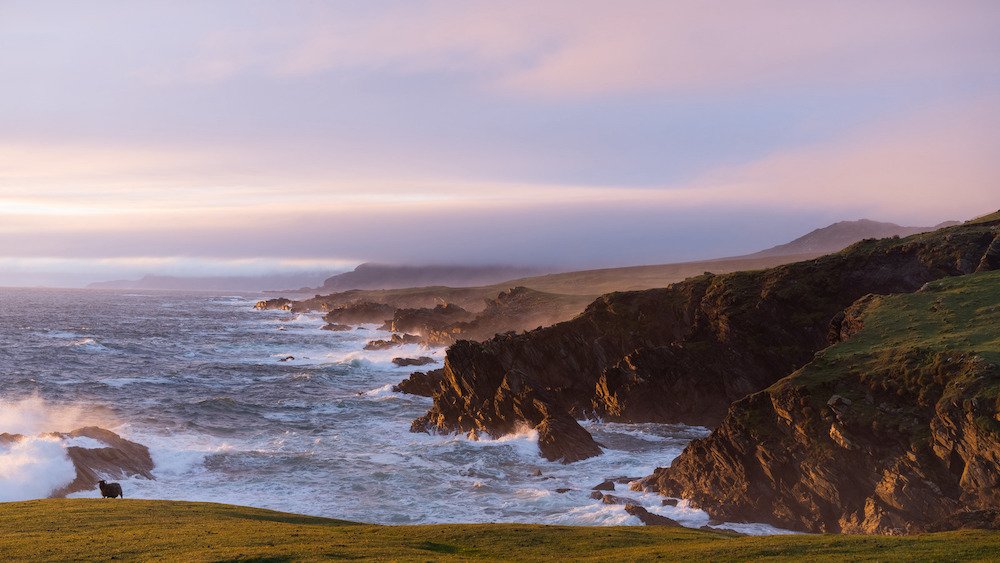 Despite the shoot proving to be a physically-demanding effort, Davis reports that he enjoyed working in a tight knit group with McDonagh, the cast and crew in such an enchanting location.

“There’s something really special about existing on an island surrounded by the ocean, where every day is beautiful in its own way. It was one of the best productions I have ever worked on, I think it’s got a whole wealth of resonances that will make people think.”