CW: How do you feel about being a BSC Award-winner?
Tamás: It is truly a great honour to receive this prestigious award. Since I started working towards becoming a cinematographer, the work of BSC members has acted as a lighthouse for me, showing what is achievable with hard work and creativity. I learned a lot just by watching their work and even more by listening to interviews. Winning this award is a reminder that it’s still a long way to what I aspire to be, but I have already started the journey towards it.

CW: Tell us a little about your film school education?
Tamás: I started my studies at the London Film School (LFS) in January 2017. The MA filmmaking programme there is a two-year, intensive and hugely practical course.

The two years are divided into six terms, and in the first five you end-up working on a range of short films – 16mm B&W silent film, 16mm colour, documentary, 35mm B&W and colour digital (on ARRI Alexa). The programme is not divided into different routes, rather everybody picks a route they really want to focus on.

I personally focused on cinematography from the very beginning of the course. Term six and the year following are aimed at working on graduation films and are also a sort of transitional phase for many to start working in the real world.

American Honey (2016, dir. Andrea Arnold, DP Robbie Ryan BSC ISC) had a huge influence on us… we liked how handheld camera can capture realism and poetry. 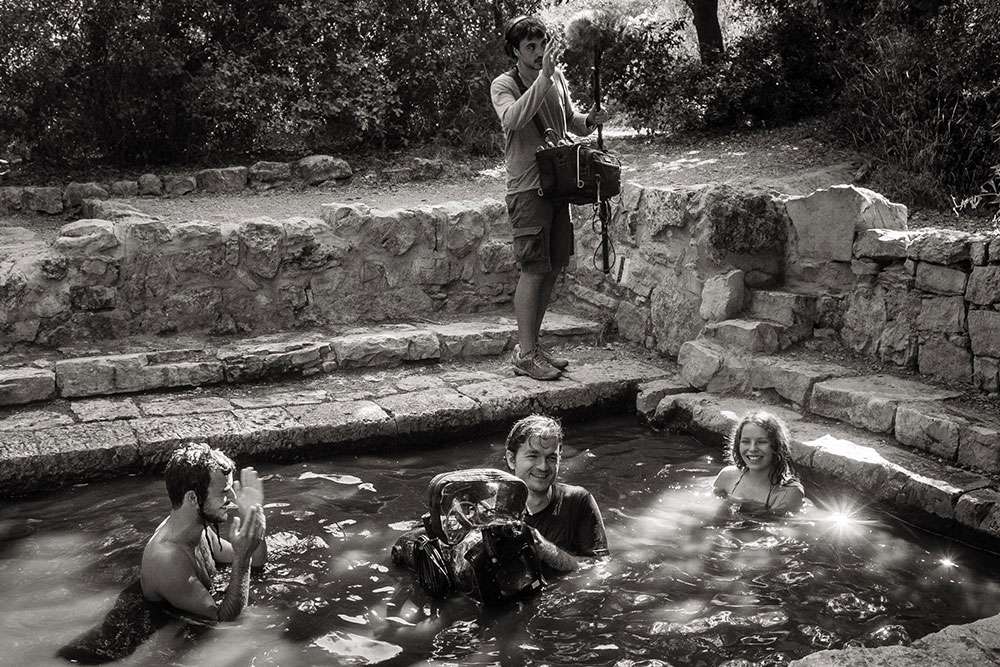 CW: What were the best things about your time at London Film School?
Tamás: The best thing for me at LFS, besides the very dedicated teachers, was the people I met and had the opportunity to work with. I made life-long friends and hopefully collaborators.

Another thing I would like to mention was the opportunity to shoot on 16mm and later on 35mm film. It has completely changed my methodology in terms of how I prepare for a shoot. Until the moment we start recording, I meticulously check my lighting, and pay attention to my contrast ratios. It really taught me the importance of consistency.

LFS also taught me humility and appreciation towards all the other departments. For me to be able to understand, learn and always to try working in other departments has been really helpful even in projects that I have worked on since leaving the school. I am finding myself being much better at finding solutions.

Some of my tutors like Belinda Parsons, Timo Heinanen, Joe Dyer and Philip Sindall, have all had a huge influence on me – not just with their vast knowledge in filmmaking, but also teaching us about on-set etiquette and what it means to be a cinematographer.

CW: Tell us a little about Summer Shade?
Tamás: Summer Shade was written and directed by Shira Haimovici, originally from Tel Aviv, who is also a graduate of LFS. The lead character Gal is played by first-time actor Netta Roe. The total budget of the film was £11,000.

The film explores through true events the discrimination against women in Israel, via a slice-of-life insight into an Israeli summer day. Gal, a 13- year-old redhead girl, runs away from her older sisters, towards her favourite relaxing summer spot: the magical refreshing pond nearby her summer house. However, shortly after her arrival, a group of ultra-orthodox Hassidic Jewish boys arrive at the pond and violently kick her out of there so they can proceed with their ritual immersion called ‘mikveh’. 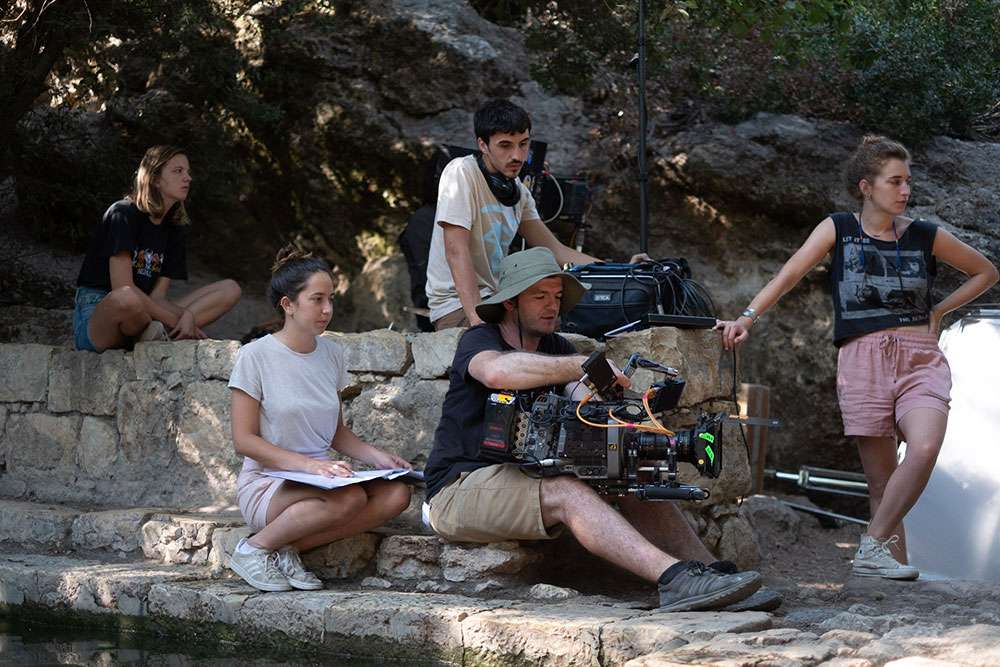 CW: What were your initial conversations with the director about the look of the film?
Tamás: A lot of our early conversations with the director covered the background and the meaning of the film and how the story is meant to touch on a wide array of heated topics such as discrimination, secular vs. conservative conflicts, through to territorial conflicts. The title is also meant to reflect on these disputes, as in a middle-eastern country everyone is always trying to ‘get into the shade’ which symbolises comfort and protection. All these topics lead us to embrace the sun and the heat in the visual style of the film as well. So, from early on we knew that this was the look we were trying to achieve.

CW: Did you look at any visual references?
Tamás: One particular film that inspired us visually was the Turkish film Mustang (2015), directed by Deniz Gamze Ergüven, photographed by David Chizallet and Ersin Gok. In a similar tone we wanted to capture the innocence of a young girl on the verge of womanhood, whilst creating a lyrical backdrop to her coming recognition of conflicts she has to face in the real world.

In terms of camera work, American Honey (2016), directed by Andrea Arnold and shot by Robbie Ryan BSC ISC, had a huge influence on us, because we liked how the handheld camera can capture realism and poetry at the same time. 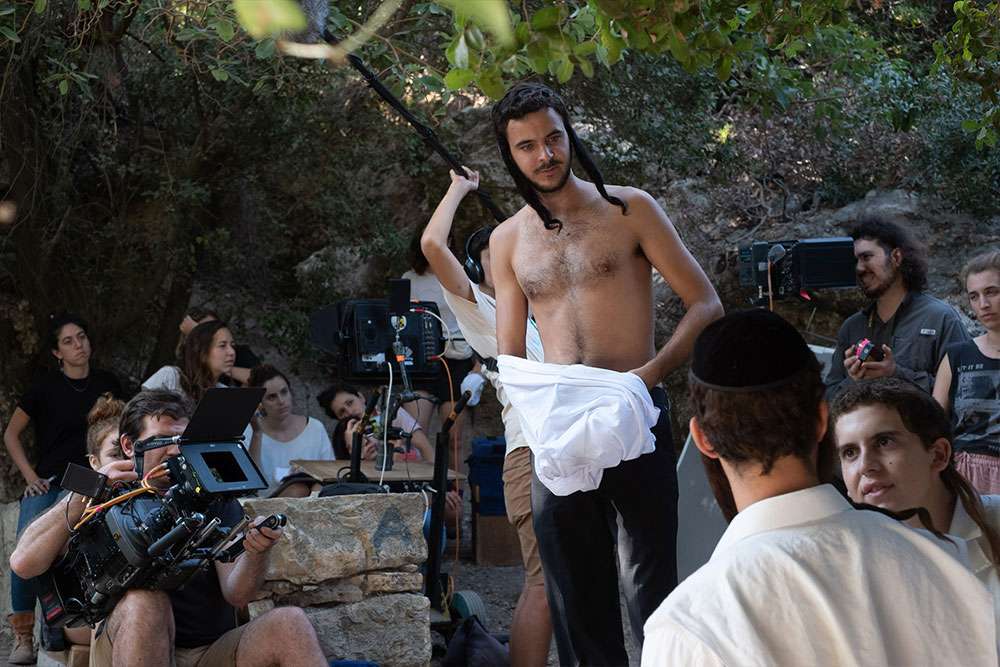 CW: Give us some details about the shoot?
Tamás: We shot in early October 2019, on location, for five continuous days, close to Jerusalem. The first major location was the house where the majority of the crew were also staying, where we shot for two days. The other was the pond, around ten miles away, in a valley which we could only get to on some narrow dirt roads. From the parking spot we had to hike up the side of the valley to get to the actual pond. We usually did ten-hour days. However, most of the time we shot as long as the light allowed us. The hill was east facing, so we actually lost direct sunlight on the pond in the early afternoon.

CW: What aspect ratio, cameras and lenses did you select?
Tamás: The aspect ratio we ended up shooting in was 2.20:1. The main camera we used was the Sony F65 Cinealta with Angenieux Optimo 15-40mm and 28-76mm T2.6 zooms. We also used a Sony F5 as a secondary camera for the underwater shots. The majority of the kit was supplied from Movie Mobile in Tel Aviv.

I believe the Sony F65 is a really beautiful but highly underappreciated camera. It shoots 16-bit RAW in 4K, which offers you a lot to play with later on in the grade. Along with the huge dynamic range, my favourite feature is the mechanical shutter, which really gives a buttery smoothness to the image when the camera or subjects are moving fast. As we shot the film completely handheld this was something that was important to me.

The F65 is just amazing for handheld work. It is really well-balanced when it’s on the shoulder and, in my view, its weight helps in keeping the handheld work fairly smooth.

The Angenieux Optimo lenses were a great surprise to me. We knew that we were looking for a set of lens that would give us a sharp but feathery lightness to the image. We wanted to capture the beauty of the nature around the central character and to replicate the dreamy summer feel she may be experiencing as an innocent young girl.

After we went through all the prime lens kits the rental house had to offer, I asked what else they had. They brought out the Optimos and we immediately fell in love with them. As an addition we used a Tiffen ½ Glimmer Glass to make the highlights a bit more prominent and make the image feel a little more hot and steamy. 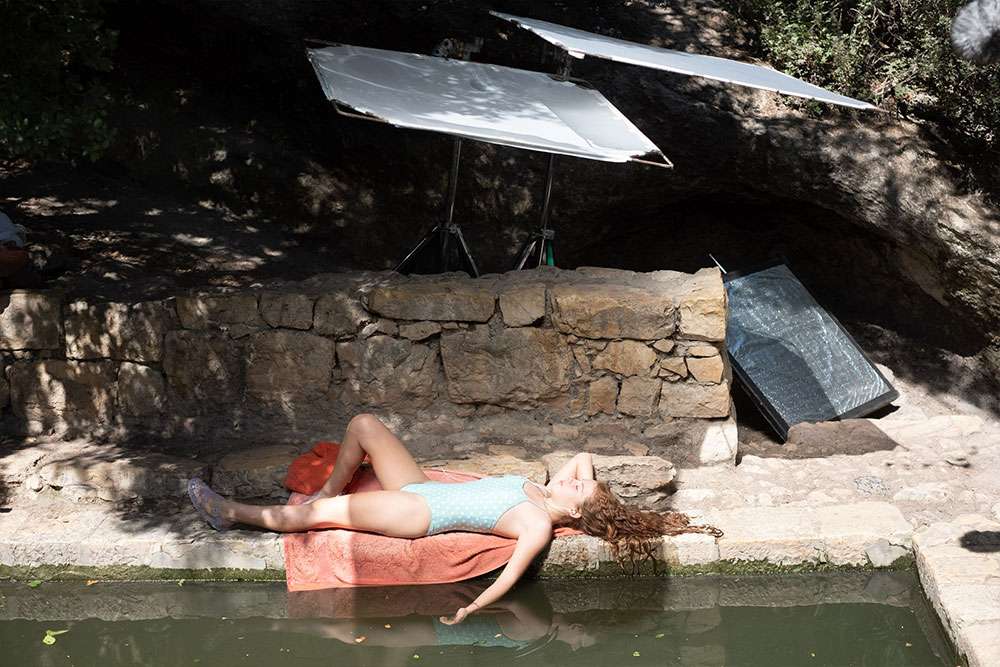 CW: Did you move the camera in any special ways?
Tamás: I operated on the entire film, either handheld or using an Easyrig. Some of the more complex shots were the ones inside the pool with the Sony F5 and the scuba casing. The bottom of the pond was very uneven and we were doing 360-degree shots from the moment Gal jumps into the pond to the moment she gets out. We were trying to give a very subjective feel to these shots, really trying to get into her shoes.

The blocking could be described as a clockwise movement in the pond and, to create more dynamic shots, I decided to move anticlockwise with the action, essentially going around the characters. This constant shifting helped us create tension and an alternative to a more common reverse shot set-up.

CW: How about your lighting gear?
Tamás: The lighting kit was also provided by Movie Mobile and consisted mostly of frames, silks, ultra-bounce, an M18 HMI and some smaller Tungsten heads that we used in the interiors. Around the pool it was a little difficult to manage the direct sunlight and the boys standing in the shadows, so we tried to bounce as much light in as possible. Due to the lack of space this was quite challenging at times.

CW: Where did you do the final grade?
Tamás: The final grade was done in Budapest with Szilárd Tőtszegi at Post Edison. The first pass had a lot more saturated colours and contrast. However, we decided to lose some of the saturation and push everything a little towards the highlights to make the image feel really hot.

CW: Who were your crew?
Tamás: My focus puller was Ori Ben Ari who besides being a great focus puller, also made great efforts in helping with some of the logistics of getting in touch with the rental houses and helping to sort out the equipment that we needed. My 2nd AC was Tesha Shalon, Ira Neuman was the gaffer, with Servane d’Alverny working as grip.

I would say it was one of the smoothest productions that I ever worked on thanks to the whole crew. Every member of the team worked equally hard to turn this short film into something that is worth watching.

CW: What were the biggest challenges on Summer Shade?
Tamás: The biggest challenge was definitely lighting continuity. We were trying to shoot scene-by-scene. However, because the encounter scene between Gal and the boys is quite long, we needed a lot of coverage and had to make sure the lighting would match. We ended-up shooting the scene over a day and a half.

CW: What’s coming up next for you?
Tamás: I don’t have an agent yet, however I am currently in pre-production on a few other short films – one to be shot in China, and two others in the UK. I have a few commercials lined up too, and my first feature film, that I shot back in August 2020, is currently in post-production, so I’m eager to see how that turns out!