Strangers make connections on a train in Juho Kuosmanen’s Compartment No.6, filmed in 2-perf on Kodak 35mm by DP J-P Passi

During recent times, when a great many have been starved of nourishing personal interactions, Juho Kuosmanen’s Compartment No.6 (Hytti Nro.6) – filmed in 2-perf on Kodak 35mm celluloid by trusted cinematographic collaborator J-P Passi – is likely to resonate following its debut in-competition for the Palme d’Or at the 2021 Cannes Film Festival.

Set at the end of the 1990s, Finnish student Laura (Seidi Haarla) boards a train for the six-day journey from Moscow to Ulan Bator, Mongolia, to see ancient rock paintings, leaving her girlfriend behind. On boarding the train, Laura finds herself having to share the long ride, and a tiny sleeping car, with Vadim (Yuriy Borisov), a grizzled and opinionated miner, who recounts long and lurid stories about his sexual conquests and violent fights. Whilst Vadim may be crude, he isn’t cruel, and shares with Laura the sausage, black bread and tea he’s brought for the journey. As the train cuts slowly across thousands of miles of wintry Russian terrain, Vadim coaxes Laura out of her gloom, and a companionship slowly grows as they face the truth about their yearnings for human connection. 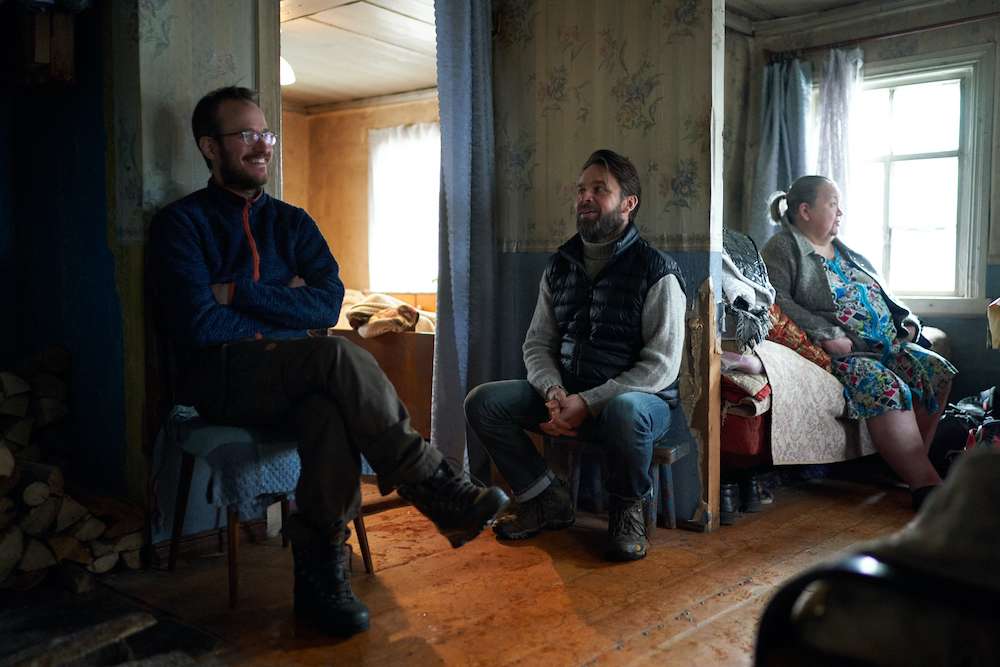 Inspired by Rosa Liksom’s 2011 novel of the same name, Compartment No.6 is the second longform feature from the celebrated Kuosmanen. His short, Citizens (2008), earned a Silver Leopard at Locarno; his medium-length film, The Painting Sellers (2010), won the Cinefondation Award at Cannes; and his B&W feature debut, The Happiest Day In The Life Of Olli Mäki (2016), garnered the Un Certain Regard Award at Cannes. All were shot on film by Finnish DP J-P Passi.

“The film is kind of a girl-meets-boy road movie, where the relationship between them is complicated,” explains Passi. “The story is romantic and funny at times, but is deeper and more difficult to define than ones that are usually related to road and romcom genres. 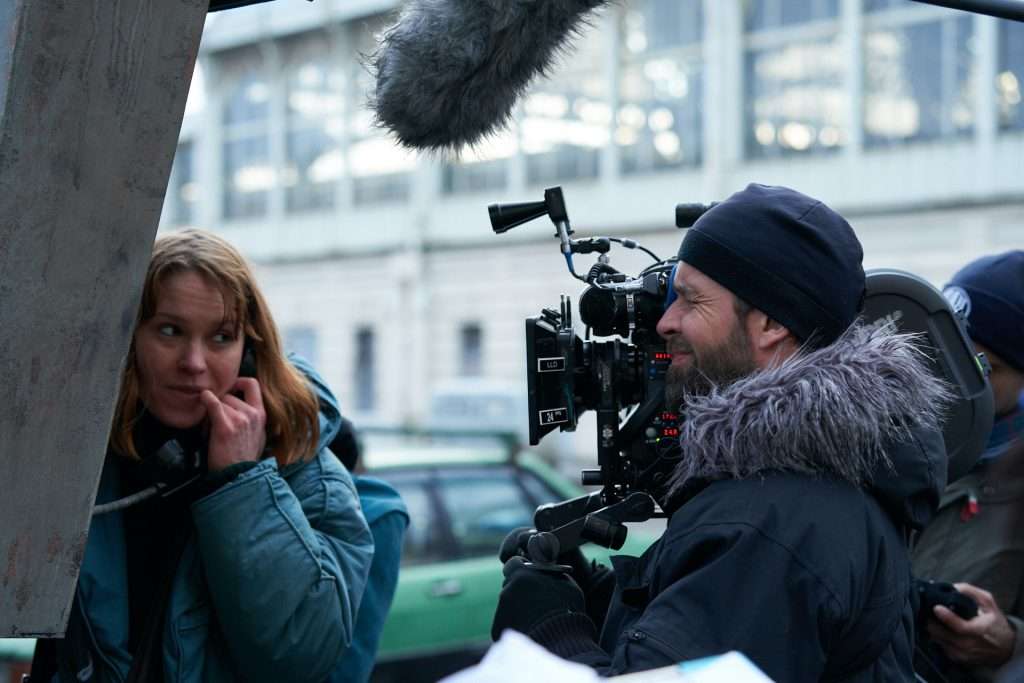 “What made Compartment No.6 special for me was the fact that its subtle and memory-like story could only be told by the tools and rules of filmmaking. Using 35mm celluloid, it portrays feelings and atmospheres that don’t necessarily have exact names, but are – or hopefully will be – familiar to the audience.

Kuosmanen and Passi started scouting for the film in Russia, in early 2019, about a year before the film cameras rolled. During that year, the pair made numerous trips on trains, also visiting small and large cities en route, spending some 65 days getting ready and prepared together.

The shoot for Compartment No.6 occupied 28 days over six weeks, from February 12th until the wrap on March 26th 2020. Due to lockdown in Russia, the movie’s Moscow city centre scenes ended-up being filmed in St Petersburg. Other locations included the northern Russian conurbations of Petrozavodsk, Olenegorsk, Murmansk and Teriberka, the latter being familiar to some from Andrey Zvyagintsev’s 2014 film Leviathan (Mikhail Krichman). A cavernous, covered railway maintenance depot was used to shoot some of the train sequences, where two carriages were fitted with hydraulic jacks to simulate the train’s movement and surrounded by a large moving lighting rig and SFX backdrops. 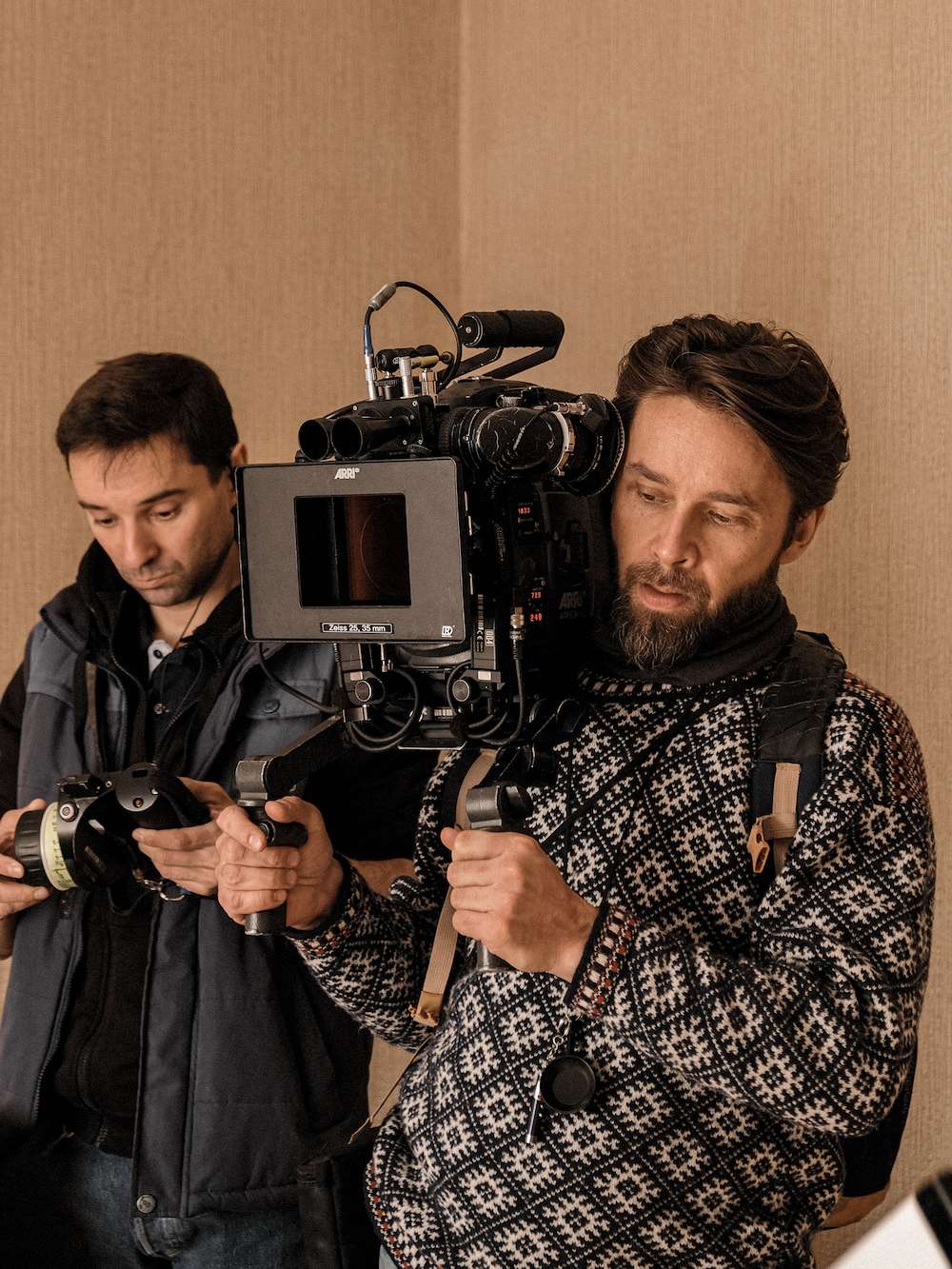 “This project was a dream come true because, for me, Russia is one of the most fascinating countries to travel around, and shooting with Juho is always fun and interesting” says Passi. However, he candidly admits that, “I was a little bit worried, because I hadn’t really shoot much for a year or so and was nervous I might be completely rusty, and also because of the super-challenging main location, which was the old Russian train.

“Many scenes took place in the small compartment, even in the toilet, and the plan was to move a lot with the camera. I wasn’t sure if it would be spacious-enough for shooting purposes. Travelling around presented production and logistical challenges too. However, the characters and the visual progress of the story arc were something I was never in any doubt about – the claustrophobic first half followed by the fresh, open landscapes later on.”

Amongst the visual references to evoke the aesthetic atmosphere, Passi says he, Kuosmanen and production designer, Kari Kankaanpää, watched the old Soviet Union train film Happy Go Lucky (Pechki-Lavochki, 1972, dir. Vasiliy Shukshin, DP Anatoliy Zabolotskiy) to observe do’s and don’ts of using the different focal lengths for storytelling purposes. A key film was Alexey Balabanov’s 1997 feature Brother (Brat) (DP Sergey Astakhov), for its natural realism and visual guidelines from that period. They also went through photographs taken in Russia around the Millennium, and mood boards created by Kankaanpää from their various recces at the chosen physical locations.

“Shooting on video was never mentioned,” remarks Passi. “The discussion was about the celluloid frame size – 16mm, 2-perf or 3-perf – and the aspect ratio. But that discussion was easy, as we agreed pretty early-on that the look and feel of this film should be as intimate as 16mm, but a bit more capable in terms of clarity, pushing the look and the texture of grain on 35mm.”

The decision to shoot 2-perf 35mm film was not economical but visual, and the final aspect ratio was found during the post production process, as Passi explains. “We actually shot the whole movie with an aspect ratio of 2:1, as we wanted to keep close to our characters in the narrow confines of the train. However, when we got into post production, we realised that there was more to a lot show in the material, and ended-up using the full 2.40:1 aspect ratio of the 2-perf frame. A similar thing happened with The Happiest Day In The Life Of Olli Mäki, which we framed for 1.33:1, but opened-up to 1.85:1 in post.”

Passi shot Compartment No.6 using an ARRICAM LT in 2-perf mode, with a spare body ready to capture in 4-perf in case of any malfunctions and also for some wider shots. After testing, he selected Zeiss Super Speed lenses for their T1.3 capabilities in low-light, appealing softness and subtle flaring characteristics. The camera equipment was variously supplied by ARRI Berlin, Len Kino Service in St. Petersburg and Cinelab in Moscow.

“We originally tested KODAK VISION3 200T, KODAK VISION3 250D and KODAK VISION3 500T, but due to logistical reasons when shooting in Russia, especially in remote regions, we ended-up shooting everything on 500T,” says Passi. “In a perfect world I would have probably wanted to use Kodak’s slower and richer stocks, but as our lighting capacity was limited and many of the locations were small and dark, the 500T made much more sense. And, as Juho and I were already familiar with the stock, having shot all of our films on 500T, we already knew pretty well how it would behave.

“We push processed about 30% of the material, either 1 or 2 stops at the lab. Pushing really helps when you need to move a lot with the camera, because it would have been really time-and-money consuming to increase the light level everywhere. Obviously you have more grain in the image, but the looks felt true and natural when we were close-in to the characters shooting handheld.” 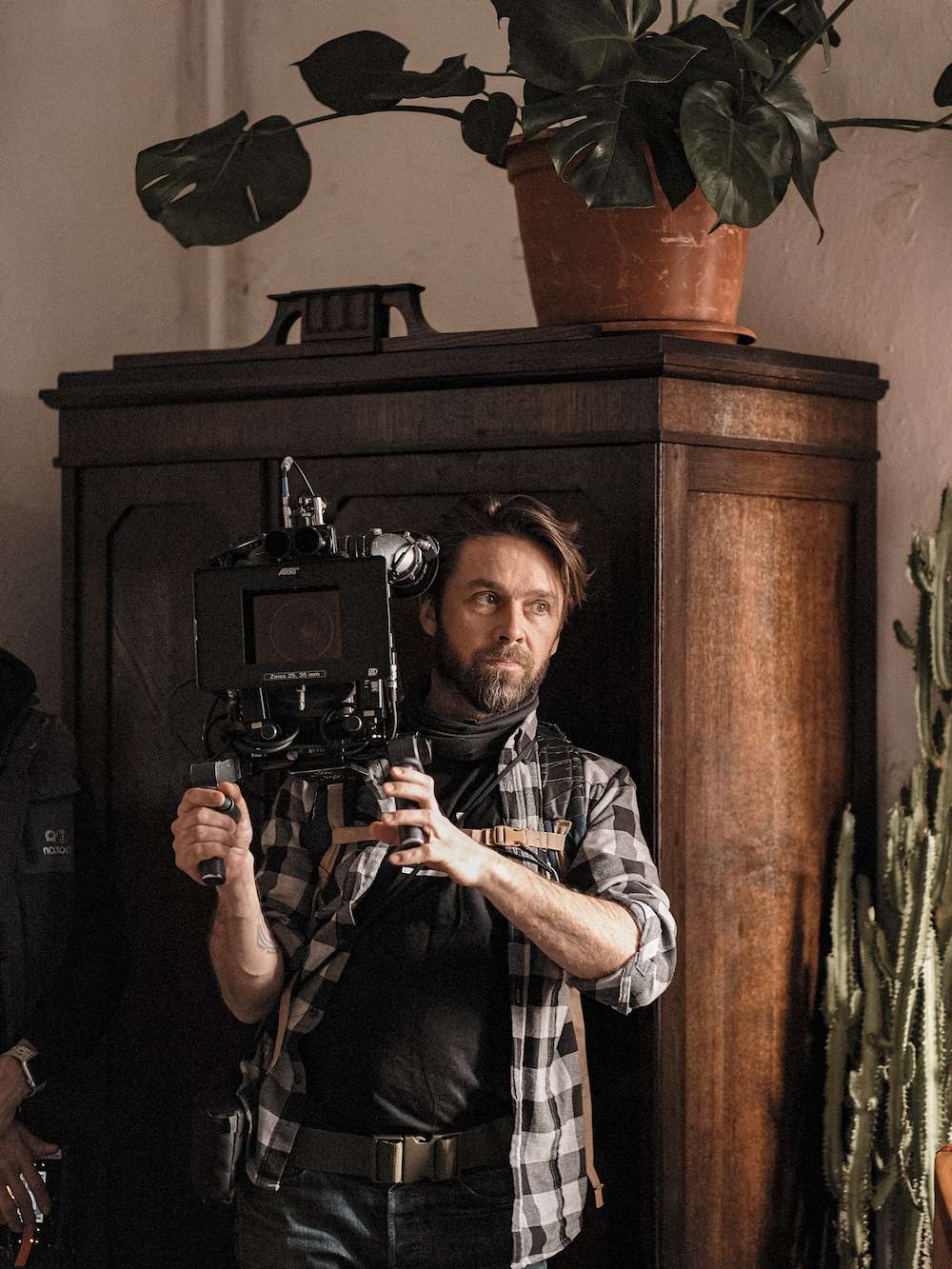 Regular film processing was done at Mosfilm in Moscow, and some of the pushed material processed by Studio l’Equipe in Brussels.

“I like the way film handles extreme conditions, like when we shot Steadicam during a massive snowstorm by the Barents Sea, which is one of the key moments of the film,” says Passi. “I think celluloid repeats colours in a more realistic way. It is also much more tolerant when it comes to any kind of issues you might encounter with exposure or moments when you cannot control the lighting as you might wish. To me, film is closer to what we see with our eyes than the 100% electric picture. For filmmakers who want to try to achieve something special emotionally, I warmly recommend film. It kind of releases us from a time and place, whereas video is more like a document of a situation.

“In Compartment No.6 there is, for example, a sequence which takes place in the house of an elderly woman living in a small village near Petrozavodsk. She had never acted before, but kindly let us shoot at her place and also took a role in the film. Needless to say, those kinds of situations have to be handled carefully. By which I mean, you can’t shoot with big ass light rigs outside the house, or a jungle of flags and frames inside. As she had only some hanging lamps with raw Tungsten bulbs, I would have been in trouble if shooting digitally, or if not trouble, at least in capturing material with the same interesting atmosphere.”

Passi says he enjoyed having the support of “a super professional Russian crew”, with Roman Gafari as gaffer, Dima Zezyulya as focus puller and Demjan Rosljakov as camera “mehanik”/second AC.

“Dima’s contribution especially was out of this world,” Passi recalls. “In the train he often either couldn’t see the camera or the actors, because of the long moving shots in limited spaces. Nor could he use a monitor because we were shooting on film, But thanks to his professionalism, experience and CineTape system, he pulled like an angel.”

From the lighting perspective, Passi says the train was by far the most interesting, but complicated location, often being dependent on practicals.

“I felt that the nature of the light should vary according to the situation and the mood of the scene. Which meant playing with the CTO/CTB and green gels and extending this with small LED lamps. Sometimes it needed to be bright and flat, or dirty and gritty, sometimes moody, warm and cosy.” 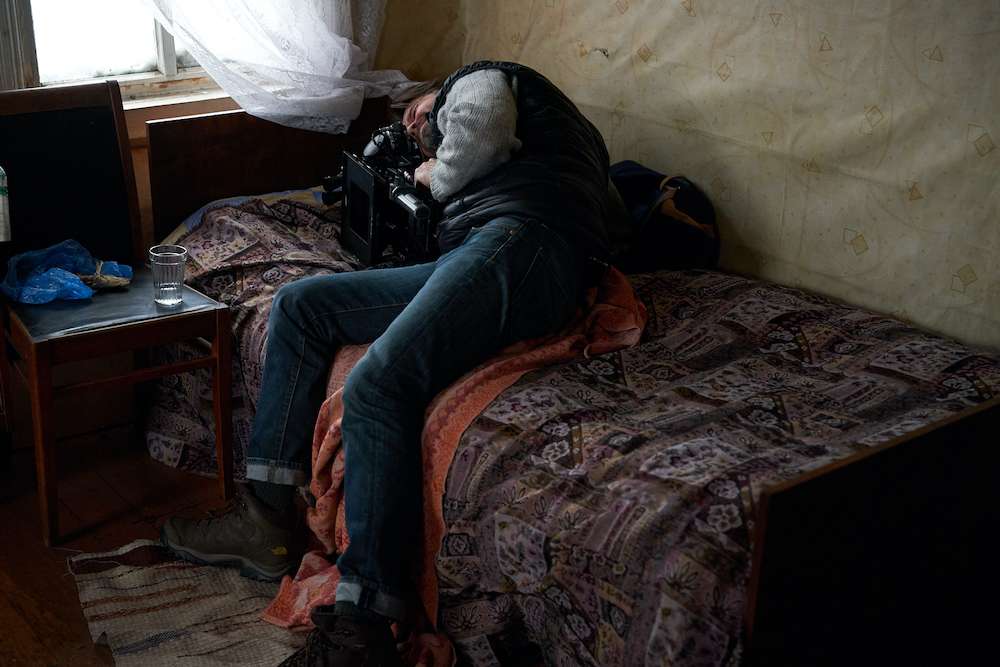 “We also needed to shoot some of the nighttime train scenes in a couple of wagons in the train depot where we built a shaker machine to simulate the movement the carriages. So we used moving LED lights, artificial snow, wind and smoke, to create the feeling of the train moving through the wintery landscape.

“Basically, we used everything – from practicals to Dedos, pocket-sized LEDs to Dinos, and 18Ks on cherrypickers – whatever served the purpose best. One of our locations was an enormous open-cast mine with a diameter of about 1km, and we needed to shoot a wide shot in the night there. So the big tools were really needed at times.”

He concludes: “For me every shooting day is a learning process. Compartment No.6 was fun, but it was a big thing for the different departments to work on. Most importantly though, the tricks and techniques we employed are not noticeable at all in the final picture. People who have watched the film believe what they see – a story about strangers sharing a trip, experiences and connections that stay with them both forever.”