Wildlife cinematographer and director, Sean Viljoen is not only passionate about capturing the beauty of the natural world, but is also dedicated to telling stories that can educate and inspire people to protect endangered species and habitats.

As a founding member of Conservation Film Company, he works alongside conservationist Ivan Carter to produce films for renowned natural history television networks, charities and trusts, to tell the stories of organisations that are truly making an impact.

We speak to Sean about his first shoot with the Blackmagic Pocket Cinema Camera 6K Pro, which he took to the Sossusvlei region of Nambia to put the camera through its paces.

1. When the camera first launched, what were your initial impressions?

I had been considering getting my hands on a BMPCC4K or 6K for quite some time. One factor that was holding me back was the battery life, so the change to NP-F 570 batteries, along with the battery grip, pushed me over the edge and I decided to go for it and see if it would tick all the boxes as my main camera going forward.

2. Which features were you most interested in testing out and how would they fit into your conservation projects?

My work involves quite a lot of international travel, often to remote locations in Africa where clearing peli cases of kit can often be challenging. In fact, just before this shoot, I’d just wrapped a 5 week project in the US shooting wild buffalo.

In order to travel light, stay nimble and get unique access on “run-and-gun” documentary projects, I have been searching for the best possible gear to fit the criteria without compromising on image quality.

The main distinguishing feature for me is the ability to capture 6K RAW on a camera of this size. Furthermore, the BRAW codec is a post friendly file format that doesn’t require proxies, which makes editing on the road much easier.

Then features like the built-in NDs along with 2x mini XLR ports were really intriguing, as I am often recording two channels of audio, frequently changing lenses on the fly and operating as a one man band.

3. How do the design and ergonomics stack up — did they match your initial perceptions?

The first thing that stood out to me was the size of the LCD monitor. The build quality is robust and there is a weightiness to the camera that I found satisfying, considering that I do a lot of handheld shooting. Every element of the design in terms of buttons and their placement has been thought of, so the ability to quickly and easily change settings makes a big difference in the style of work I do. 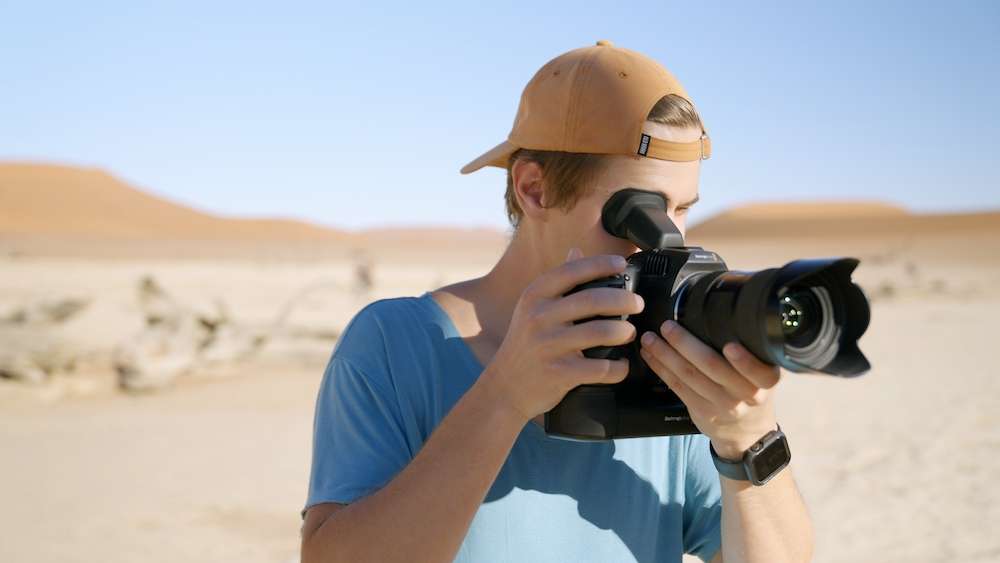 4. Can you tell us more about the film on the dunes – how did you develop the concept and what did you want to showcase?

In all honesty, I was so excited to get out into the field with the camera and do some tests that I didn’t do much pre-production for this film. I was heading back from the US project and I had left my vehicle in Namibia. My girlfriend flew up and joined me and we were able to carve out two days in Sossusvlei, Namibia to shoot the film.

To me, Namibia has some of the most incredible landscapes on the planet and I thought it would be a good place to put it to the test. I wanted to create the feeling of someone exploring this remarkable place and having a human element helped to give some perspective to the vastness of the landscape. The play of light and shadow in the dunes creates a lot of contrast, which I thought would be great to test out the dynamic range and we started before sunrise so that I could test out the low-light capabilities.

5. Can you talk us through your setup?

Technically, I was a bit undermanned and short on time, so I kept it really simple. I used the Sigma 18-35mm f1.8 Art lens for all of the wide-angle handheld shots, a Canon 100mm Macro f2.8 lens to capture some of the smaller life and details of the desert and the Canon 100-400mm f4.5-5.6 II on a tripod to capture the long lens images.

The Canon 100-400mm lens isn’t the sharpest in my experience and not my first choice, but with the 6K resolution, I was surprised at how it held up. Bear in mind that I shot the entire film at 12:1 compression, which was more circumstantial than intentional but I’m still really happy with the image quality as a whole. 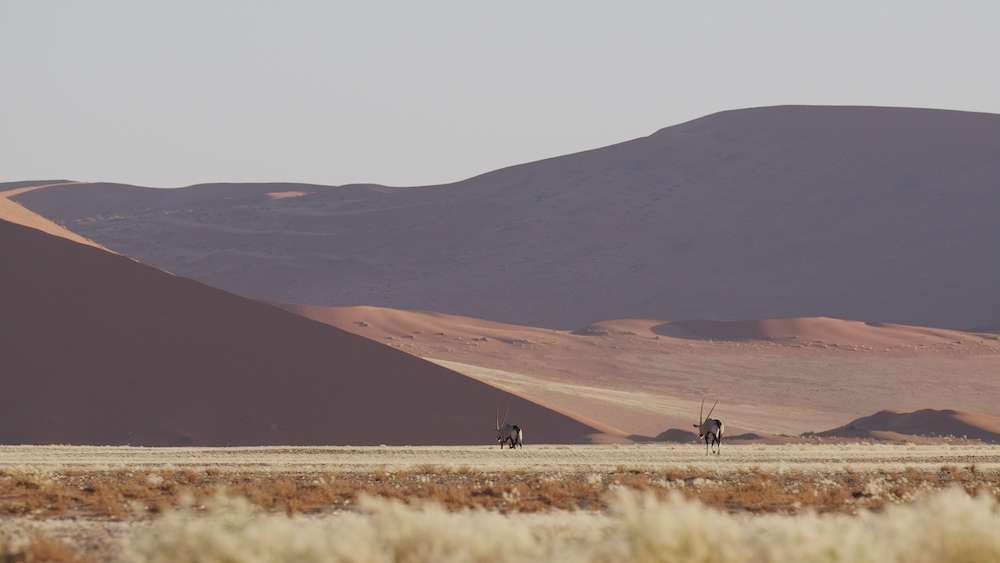 5. How was the shooting experience for you? What did you enjoy? Any particular features that stand out – or any that are missing?

I thoroughly enjoyed the shooting experience. The ability to quickly toggle a LUT on and off in camera was really useful, The built-in IR ND filters were perfect for most situations and I didn’t notice any significant colour distortion. However, when shooting on the Sigma 18-35mm at f1.8 at midday, I did need to sacrifice a bit on my f-stop (to about f3.5) to avoid blowing out the highlights. An extra two stops of ND would come in really handy considering my preference to shoot at a shallow DoF and how much of my work is outdoors.

I didn’t have to worry about battery life at all with the additional battery grip. I have 5x NP-F 570 batteries as a contingency but so far, I haven’t had to change batteries out using the grip in a single day of shooting. On average, I have had anywhere from 2 to 2.5 hours or runtime with the battery grip, a lot of which has been while recording and with the screen brightness dialled up in bright sunlight.

One thing I struggled with was a place to mount accessories like a shotgun microphone or lavalier receiver. That wasn’t too much of a concern on this project as I didn’t need two audio inputs but going forward, that is something I will need to figure out. The other feature I missed is in-body stabilisation but all in all, I think the pros far outweigh the cons. 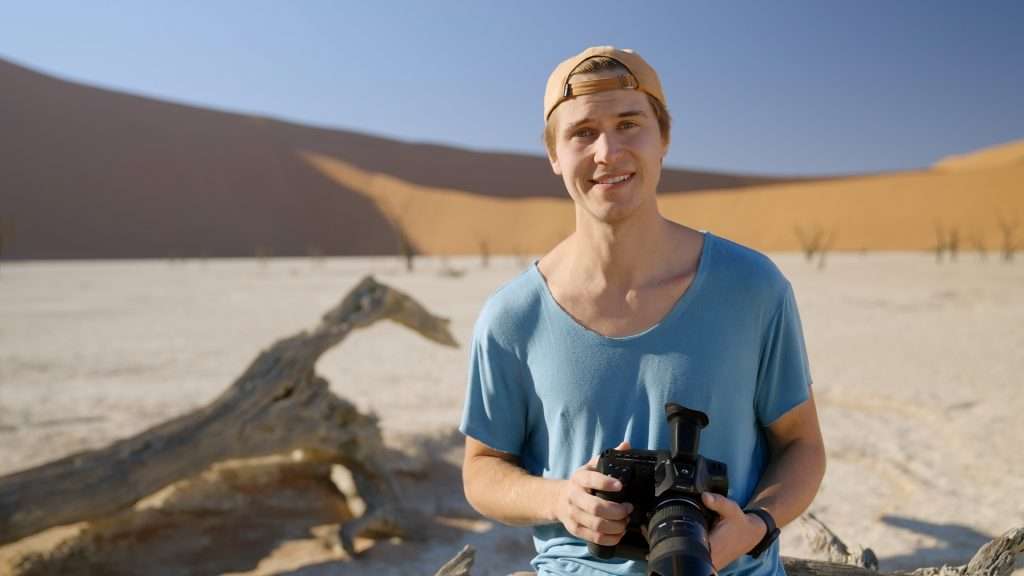 6. You mention in the film that it’s your first time using an EVF – what were the reasons behind that, and how was the experience?

I guess my introduction to filmmaking was through using an external monitor and I had never felt like I was missing anything by not using an EVF. I also found the concept of needing your eye to be glued to the viewfinder limiting when filming at low angles or in tight spaces. Also, the work I do is often in close proximity to wild animals in circumstances that can be dangerous, so situational awareness is crucial.

That said, I really enjoyed filming with an EVF and I think it definitely has its applications. When natural lighting conditions made it difficult to see the LCD screen or filming handheld as an extra point of contact, I found it particularly effective. I like the option to switch between using the two and I plan to leave it connected going forward.

7. What has been the reaction to your film – what have people been asking about most?

I have been pleasantly surprised by the positive feedback about the film so far! It was definitely cheating by filming in the location that I did and I feel there is a lot of room for improvement as an operator, since it was my first experience shooting with the camera but nonetheless, great to hear that the content has been well received.

I’ve had the most questions about the colour grade and workflow I used when shooting RAW. I aim to get the image right in-camera but that doesn’t always go according to plan. Having the flexibility of shooting RAW is incredible and I was surprised by just how much can be done to recover the highlights. In the past, I’ve found that working with RAW footage seems to add a lot of time to a post-production workflow and the juice isn’t really worth the squeeze for most projects. But with the BRAW codec integration into Resolve, 6K resolution, the added bit-depth, and no colour compression, the pros far outweigh the cons. I also found the skintones to be really accurate with the new gen 5 colour science. 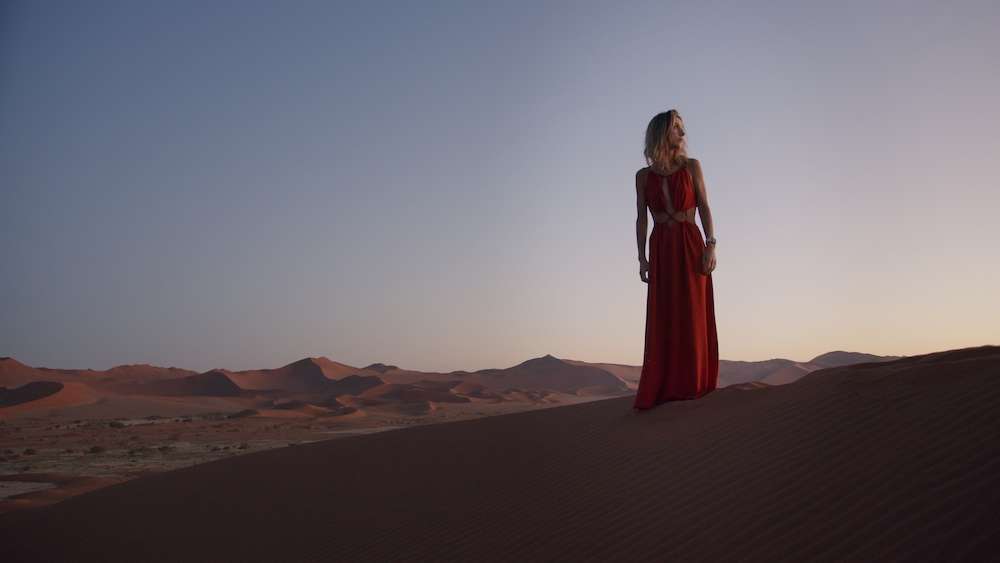 I’m excited to work on a passion project on an upcoming trip to Namibia where I will be headed to the Skeleton Coast. The aim will be to create a short film about the magic of desert environments and the life that manages to survive there. I’ll create a more in depth, in-field review that accompanies it, which will be a lot of fun to make.

We’re in the process of getting a documentary I worked on, Last Horns of Africa, about the rhino poaching crisis, which had its premiere at EarthX Film Festival, out to the world. We were honoured that the film received an Impact Prize at the festival and hope to see it gain some momentum in the months to come.

As Conservation Film Company, we have recently landed two separate series on EarthxTV, with the first, Kids in Conservation already showing. It’s very encouraging to see that there is still huge interest in films that can help to shine a spotlight on some of our most precious natural environments and what can be done to protect them.