Expertly-shot in rich and vibrant hues by Swedish filmmaker Ruben Östlund’s long-time cinematographic collaborator, Fredrik Wenzel FSF, Triangle Of Sadness navigates the world of fashion and the boundaries of relationships, as the fashion model couple Carl (Harris Dickinson) and Yaya (Charlbi Dean) are invited for a luxury cruise with a rogues’ gallery of uber-wealthy passengers – a Russian oligarch, British arms dealers and an idiosyncratic, alcoholic, Marx-quoting captain. 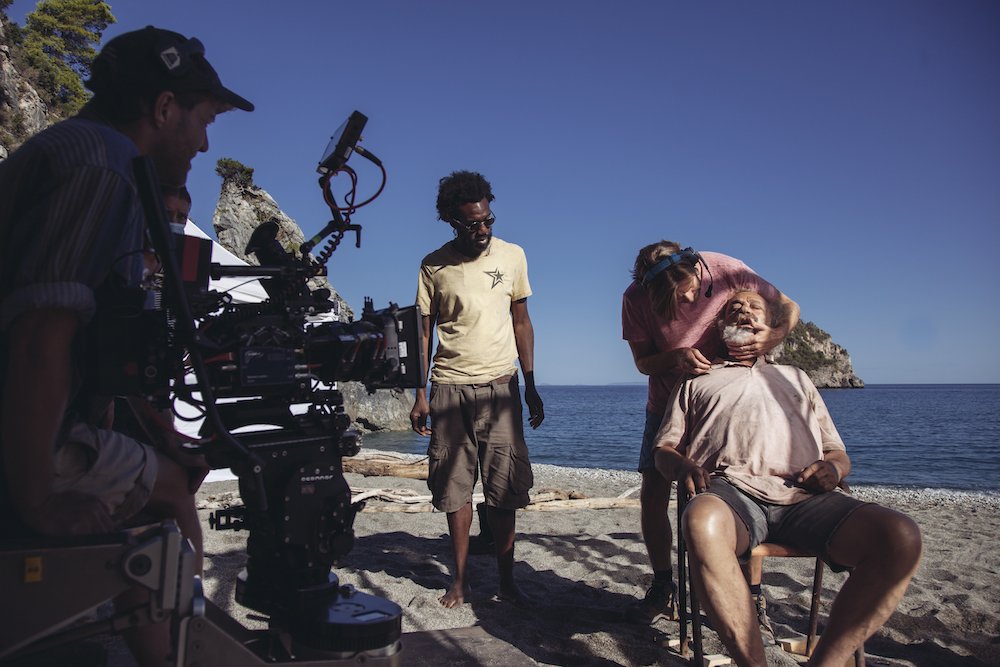 At first, all appears perfectly Instagrammable, but a storm is brewing. Heavy seasickness hits the passengers during the seven-course captain’s dinner, and the cruise ends catastrophically. Carl and Yaya find themselves marooned on a desert island with a group of billionaires and one of the ship’s cleaners. Hierarchy is suddenly flipped upside-down as the tawdry economic value of beauty is unveiled, and the housekeeper is the only one who knows how to fish.

Östlund’s absurdist and humorous satire picked-up the prestigious Palme d’Or at the 2022 Cannes Film Festival, marking Östlund’s second Palme d’Or after having previously claimed the prize in 2017 for The Square, also shot by Wenzel.

“My first collaboration with Ruben was on Force Majeure (2014),” recalls Wenzel, who lives and works out of Stockholm, Sweden. “We decided to do a week of location scouting together in the French Alps on that film and that afterwards we could both walk away from it no strings attached if we chose to. After that week he asked me if I wanted to shoot the film, and that was it. From there we started collaborating. It’s three movies now and it has been a great experience.

“Ruben is very influenced by the Swedish director Roy Anderson, in the sense that he has always valued long collaborations with people. It is quite interesting when you start to know each other on other levels. After the third movie, the process becomes very direct and intimate.”

When it came to initial conversations about Triangle Of Sadness, Wenzel and Östlund didn’t focus on the aesthetics. “It’s not like we have a mood board, or lots of influences or anything like that. Usually, we start by having a text that is very much like prose, it’s more than a script in a sense,” says Wenzel.

“We start to break that down into images. Rubens’s first draft of the script is more like a novel. You have the thoughts and descriptions of the characters, and we spend a lot of time together, just the two of us in a room, improvising, blocking the scenes, making a sort of preliminary storyboard.

“That’s where the form gets created, or at least it’s a starting point for it. We worked for 35 days breaking it down like that for Triangle Of Sadness. We don’t have locations at that point or anything, and I can’t draw so it’s just a text document at that stage.”

The original idea for the movie came from Östlund’s wife, who is a fashion photographer.

“She told Ruben stories about the fashion industry and that’s sort of what sparked his interest and imagination to start doing the movie,” says Wenzel. “Right from the start it was decided that the protagonists would be a model couple. I think the whole social media thing was a way to play with an arranged relationship because it’s a relationship beneficial for both, but it’s not love in that sense. It’s economics and that’s what gets Ruben going. To play with that idea of a transaction.”

In terms of specific creative references, Wenzel says that he and Östlund rarely talk about influences and never do mood boards. 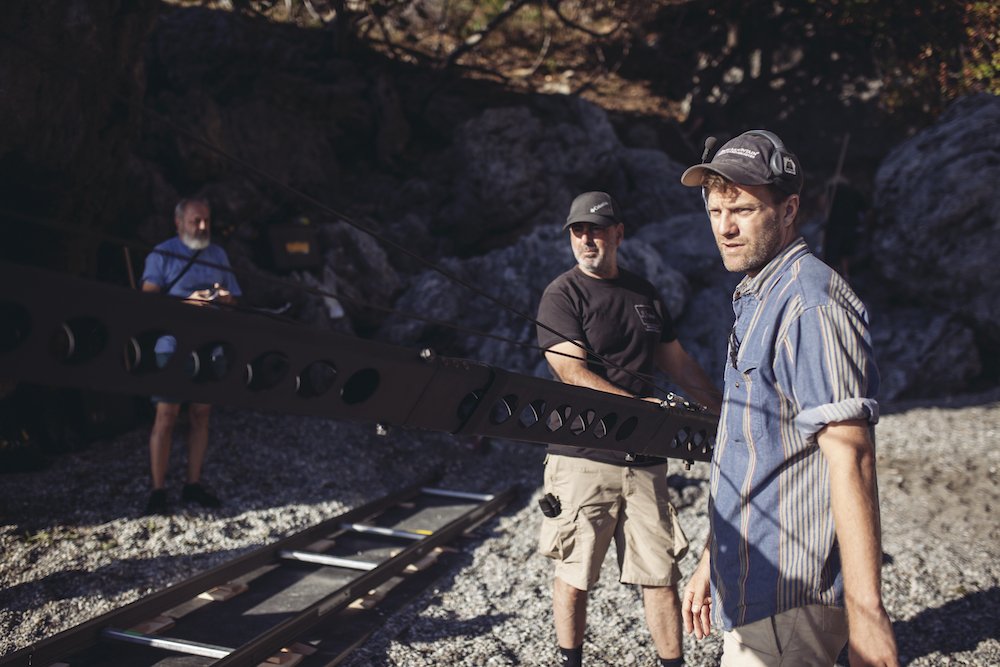 “I think our approach together is always that the film will find its language as we go along. With that said, of course we have inspirations or things that we draw from. We looked at Fellini’s And The Ship Sails On (1983, DP Giuseppe Rotunno AIC) and were inspired by the confidence of the filmmaking.

“However, it’s not about creating a 100% realistic scenario of a storm or life on a deserted island, it’s about finding that sweet spot where the audience accepts the premise. From there you are free to venture into form.

“I prefer clean lenses generally, I loved the way the Zeiss Supremes looked”

“We also talked about Tintin. We wanted to make an adventure movie and there is something about Hergé’s approach that makes it archetypical rather than symbolic the way he draws it.”

“I prefer clean lenses generally, I don’t want them to have too much character,” he says. “I did some tests with the Zeiss Supreme lenses and I loved the way they looked. I want to have a clean eye to look through and that’s what the Zeiss Supremes gave me.

“Also, they have a very subtle flaring, which I appreciate because we were shooting a lot of campfires at night and I didn’t want any excessive flaring. And, they are super lightweight too. I almost thought there was no glass in them when I held them for the first time.

“I selected the Alexa Mini LF because Ruben works like a VFX artist afterwards himself in the edit, comping images together, adding stuff, moving stuff around, and I just wanted to give him as many pixels as possible for that. We decided early-on that the camera was going to rock with the ship, so it was always mounted to the actual boat even in the storm. We wanted the camera to always be with whatever happened, but afterwards Ruben wanted to control that tilt afterwards in post-production.”

Wenzel chose to work with Martin Knispel as a DIT on-set. “With Ruben it’s special because we have so much time on each set-up, so I can really get the look done the way I want to get it done in-camera, and there’s no need for extensive corrections really. There might be some small tweaks getting things together, but its very simple on-set colouring.” 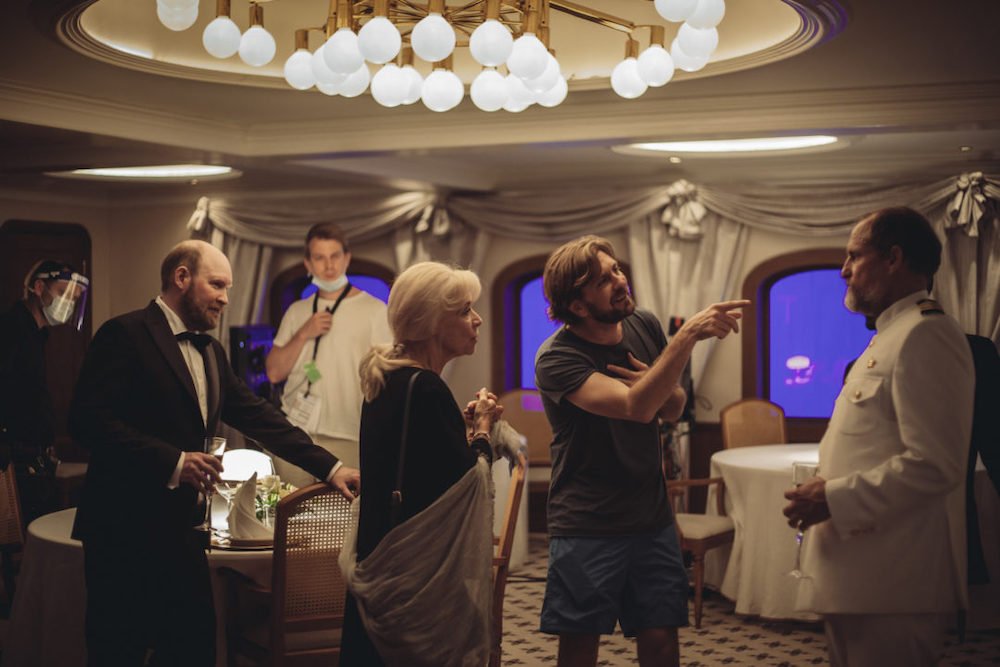 In terms of lighting approaches for storytelling purposes, Wenzel decided that he didn’t want any fake moonlight.

“Trying to get to a very realistic sense of how night feels, and having the characters being exposed to the claustrophobic darkness was instrumental for us,” he notes. “On night exteriors on the island, almost all light was motivated by practical sources, like fire or flashlights and emergency lights on life rafts, etc.. We did have a softbox with four SkyPanel SC60s over the campfire scenes at night just to get sense of the surrounding vegetation, but other than that, there were no big overhead sources.

“I’ve worked with gaffer Tobias Henriksson on all of the three movies I’ve done with Ruben. Tobias has an amazing eye and sensibility,” adds Wenzel. “We know each other well-enough by now, so we go to locations and discuss approach to lighting, but it is also something we like to figure out on the day.

“Generally, I like to see where the thing takes us and not have too much of a dead-set approach to it. I’m more curious than determined. The crew know Ruben and his method well by now and they are all amazingly talented so it makes my job a lot easier. Sometimes I have this great feeling that the set becomes like a self-playing piano and the movie is more or less making itself.”

The film was shot over a period 85 days. “The island scenes were shot in Greece, on a little beach, called Paralia Chiliadou, on the island of Evia,” says Wenzel. “We were lucky to be working through the pandemic on an isolated island, I don’t think we had one single Covid case. A challenge though is that a big part of being a cinematographer is to try to be supportive and letting actors know you see them, with a smile or a just a nod, but when your face is covered by a mask it is almost impossible to get that through, I find.” 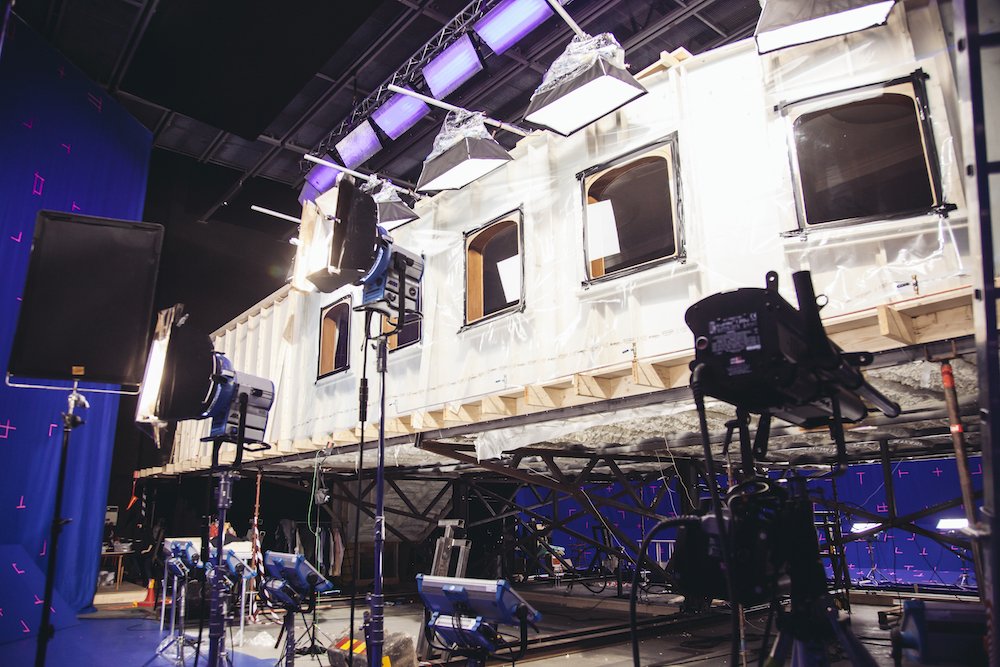 Discussing the Captain’s dinner scene, Wenzel explains that, “The big dining room, stairs, corridors and all the individual rooms were built on a rocking gimbal on a stage in Sweden. With the sets on gimbals, we could create the rocking back-and-forth to mimic the movement of the sea. With the camera mounted inside, it was mostly about how the actors’ bodies reacted to the movement, and how they worked to keep their posture. It felt like a very controlled setting for that.”

The long one-shot car sequence near the beginning of the film proved to be particularly challenging to complete, as Wenzel details: “I wanted the sensation of the spectator being placed in-between the actors in the back seat of a car, but a regular pan did not feel like it would be enough, I wanted the camera to move as well. 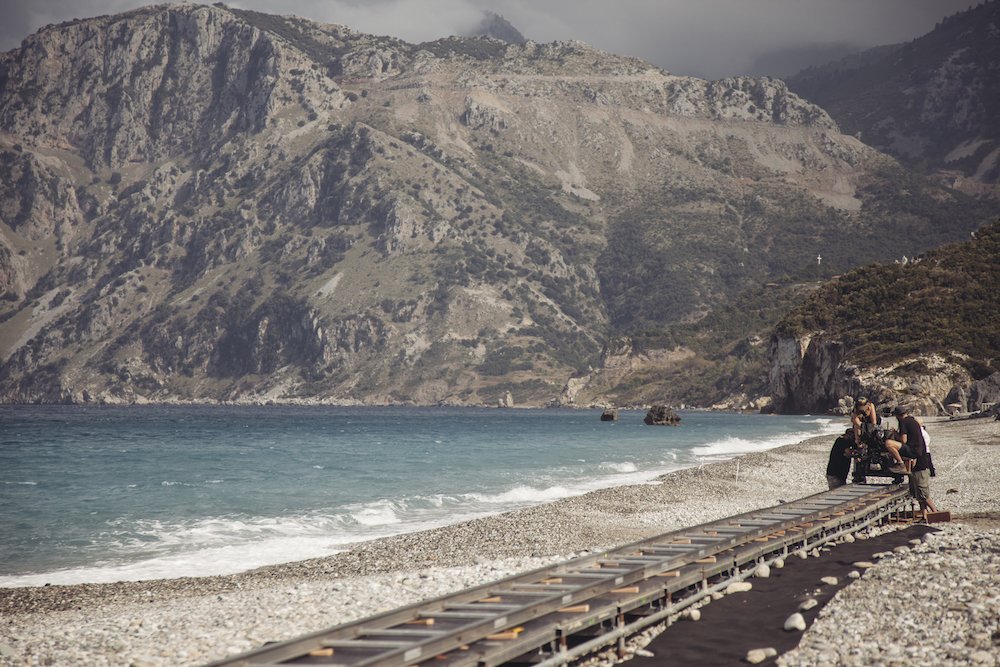 “The MRMC Bolt Jr MoCo rig was too big for the space, so I had a friend, Hugo Nilsson, custom-build a small, industrial robotic arm to work with the camera. He gave me a remote control, normally used for opening garage doors, to time the movements.

“With that, plus lights that were on the ground and rigged to the car, and the fact that we were panning 360-degrees, whilst shooting in the rain, made it into a real technical challenge. Also, it was the first day of the shoot, the very first day the actors did a scene together. That one was definitely tricky and it’s such a long one-take scene, but I’m really proud of it. It’s quite beautiful, the way the camera movement enforces and plays with this ping-pong between the genders of the characters. You are not a spectator sitting in front of them watching them, you are in-between them, turning your head, moving in to get a closer look.” 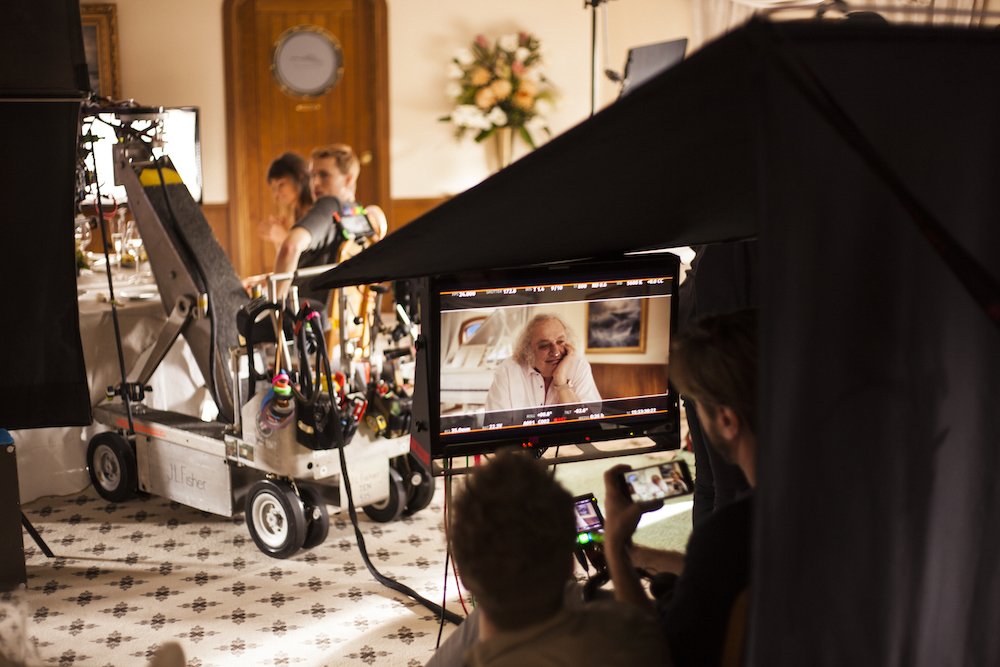 The final grade on Triangle Of Sadness was completed on Blackmagic DaVinci Resolve at Tint in Stockholm, by colourist Oskar Larsson, who had previously worked with Wenzel on the HBO series We Are Who We Are (2020). Before principal photography began in 2020, Larsson and Wenzel reviewed camera tests and created a LUT, tweaking the ARRI K1S1 slightly in terms of contrast, with a slight temperature shift in the shadows and highlights to get more colour separation.

When it came to post, Wenzel had a broad ambition for the colour on the movie. “Every evening when I came out of the darkness in the suite, the world outside looked so incredibly rich, varied, sprawling, chaotic yet harmonious. And it depressed me that we were sitting in that room, trying to reduce, clean, polish and simplify. So I said to Oskar, let’s try and not reduce; let’s try and keep the richness. It was all about balance and enhancing the digital negative so that it felt rich, colourful, inviting, yet without a digitally-saturated look as such.”

Wenzel concludes, “It usually takes a while to prove yourself to a director, and Ruben is very much in control on all the aspects of making a movie. But there’s a sense of trust from the start now between us, and that’s a nice thing about having a long collaboration together.”