Filmmakers always want their stories to stand out from the crowd. And, when they’re magnanimous in sharing details about their practices, they can inspire others to set their sights on achieving the same. A pertinent example is Sean Ellis, the writer, director and cinematographer of the 35mm-originated horror Eight For Silver, described as both ‘spectacular’ and ‘haunting’, which premiered at the 2021 Sundance Film Festival.

“It is my hope that this reinvention of the werewolf legend will be an unsettling portrait of a community grappling with unexplained horrors, as well as a deeper exploration of the animalistic impulses that manifest from our darkest demons,” says Ellis. “Like my previous productions, I also hope it sends an encouraging message to up-and-coming filmmakers that, by using celluloid film and with proper preparation, they can create engaging cinematic experiences that stand out from the digital crowd.” 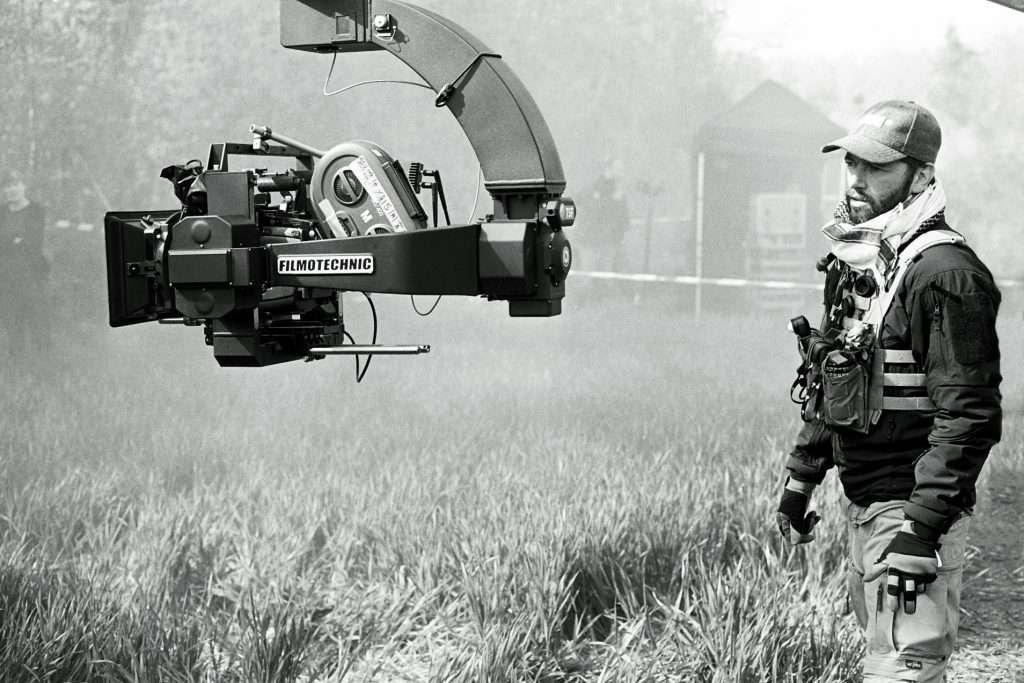 Set during the winter of 1880, brutal land baron Seamus Laurent hires a gang of mercenaries to slaughter a Roma clan claiming title to his property, but unwittingly unleashes a deadly curse on his family and the nearby village. In the days that follow, the townspeople are plagued by nightmares, Seamus’s son Edward goes missing, and another boy is found savagely murdered. The locals suspect a wild animal, but visiting pathologist John McBride warns of a more sinister presence lurking in the woods.

Eight For Silver was produced and fully-financed by producers Mickey Liddell and Pete Shilaimon of indie film studio LD Entertainment, who previously worked with Ellis in 2016 when he similarly wrote, directed and filmed Anthropoid on Super16mm film – a thriller based on the true story of the World War II mission to assassinate SS General Reinhard Heydrich.

“When I finished Anthropoid, my producers Pete and Mickey, said they were keen on financing a horror film idea I had to reimagine and update the mythology surrounding the werewolf,” says Ellis, a former fashion photographer and music video director of some renown, who is also known for his Academy Award-nominated short Cashback (2004), and the feature length films The Broken (2008), the triple BIFA Award-winning Metro Manila (2013) and Anthropoid (2016). 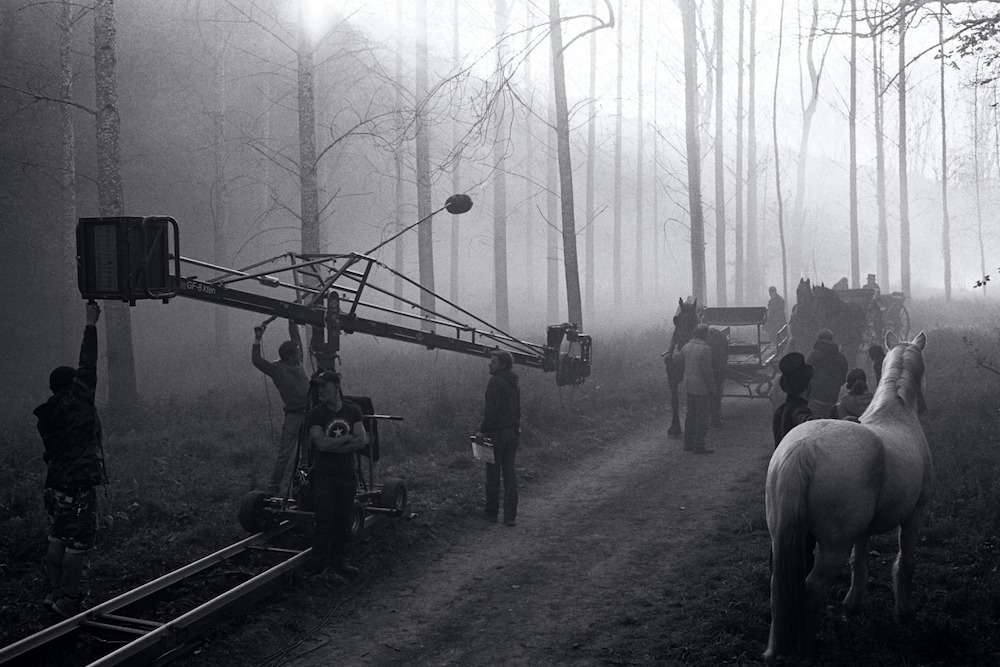 “Although American Werewolf In London (1981, dir. John Landis, DP Robert Paynter) is one of my favourite films, it was obvious from re-watching it, and other more recent werewolf movies, that these types of movies have not aged well or fallen into tropes of clichés that we have seen over and over again,” Ellis explains. “At that starting stage, I also had in mind a movie about how you can become a prisoner to your addictions, how inner voices can destroy families and communities. So, in August 2018, I wrote a one-page outline of a drama marrying the two ideas, set as a period piece in a remote, isolated village, cut-off from the rest of the world by a cholera pandemic, where a werewolf curse plagues the village. Pete and Mickey loved it, and asked me to put more flesh on the bones.”

After initial development of the script and the storyline, 35mm film production on Eight For Silver began in April 2019, for a opening spell of 35 days, at locations the Charente department of western France, including a grand manor house. The emergence of spring foliage enabled Ellis and the producers to pause production to further develop the storyline, before a second 20-days stint of production took place in the more suitably bleak weather conditions of February 2020. 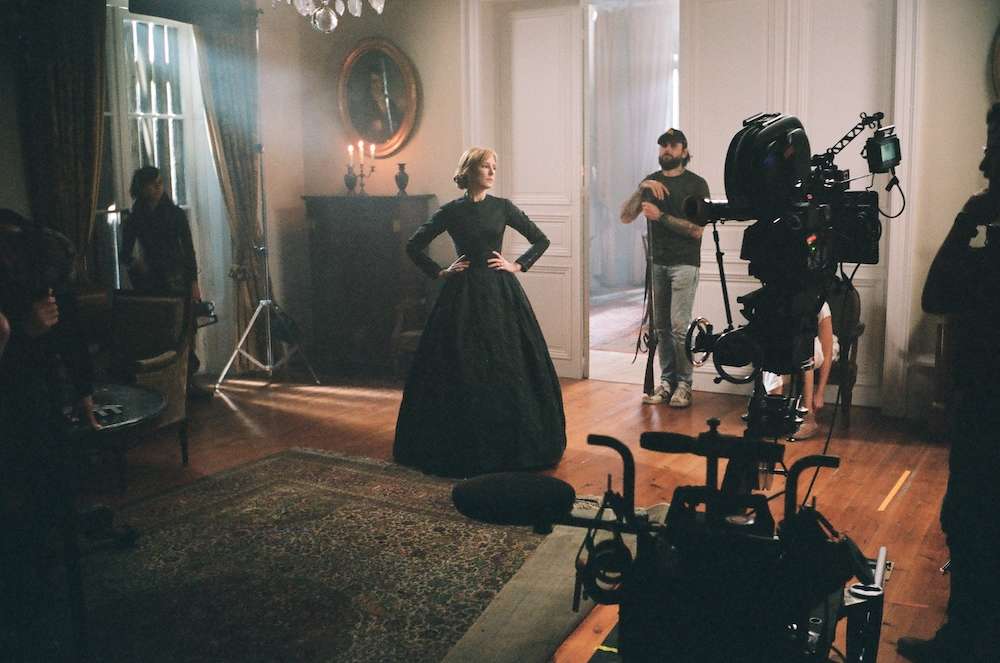 Whilst Ellis is a self-confessed cinephile and referenced a range of werewolf movies, along with science fiction horrors such as Alien (1979, dir. Ridley Scott, DP Derek Vanlint CSC), he says, “This was my fifth film and you let go of the handrail, trust your own voice, your own ideas and aesthetic sensibilities to do something new and different. Also, as I look to the future, and wonder how many movies I have left in me, maybe ten or 15, why would I not shoot those all on celluloid film?

“There’s an etiquette, a discipline and an artfulness to imagemaking with film that you just don’t get with digital. Celluloid has been around for over 100 years and has never been bettered in terms of the mechanical design of the cameras and the science behind the emulsions. To me, digital films just look ultra-clean and have no personality to them. Additionally, I don’t have the inclination to work with LUTs and DITs, trying to make digital look like film. What I love is film and how, if you are well-organised, you can make it look strikingly original, different and engrossing.”

To find his perfect visual recipe for Eight For Silver, Ellis undertook extensive testing in Paris during pre-production. This involved shooting all of the clothing, designed by Fontaine, on mannequins, as well as the wallpapered surfaces of the manor house, in various interior/exterior lighting conditions – firelight, candlelight, broad daylight and dusk – whilst also experimenting with different lenses, Kodak film stocks, film-based camera and lab processing techniques. 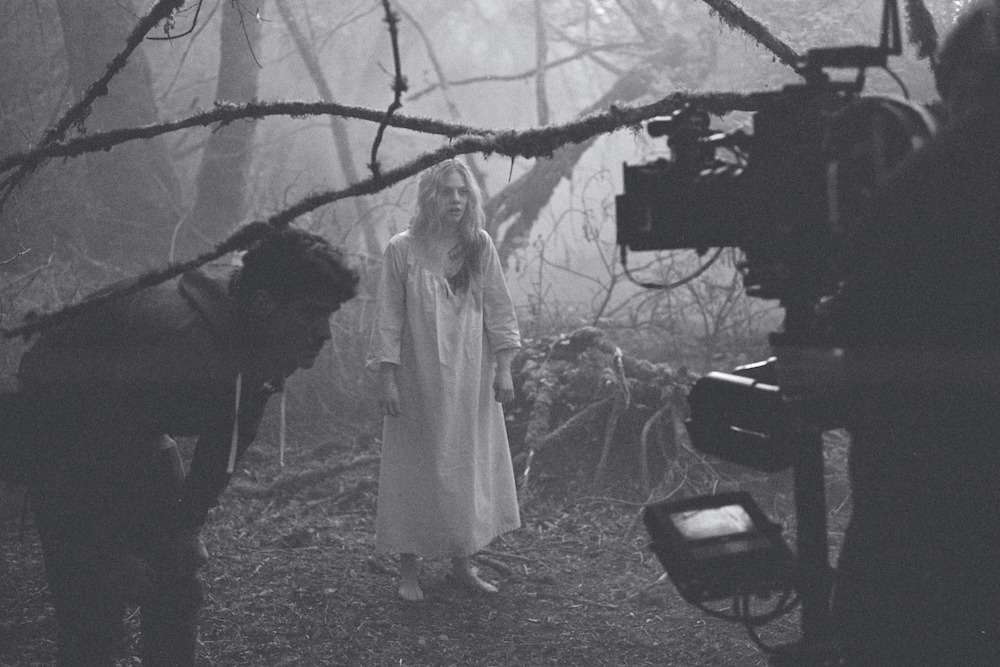 “It’s not an automatic given that if you shoot on film that the result is going to look like film, nor yield the look you want,” he says. “Finding the right ingredients is not expensive, as it just involved me with the camera and the colour team at the lab. But what it means in practice, is you can develop the look you really want, so that when you come to shoot you are ready visually and technically, which ultimately saves time and money.”

The result of Ellis’s synthesis resulted in him shooting Eight For Silver with ARRICAM LT and ST cameras, using Optica Elite Series 7 Anamorphic lenses, and capturing in widescreen 2.40:1 on to a trio of Kodak Vision3 filmstocks – namely 5203 50D for all daytime exteriors, 5213 200T for daytime interiors and 500T 5219 for all nighttime scenes. He also employed an ARRI VariCon to flash in-camera pretty much every strip of negative, and bleach bypass processing at Silverway lab in Paris, where the final grade was also conducted. The camera package for the production was serviced by Vantage, also in Paris.

“Although I considered shooting Eight For Silver in 1.33:1, 4-perf open gate, I went widescreen, as it felt more cinematic for the landscapes, and made quite a statement when slicing through the high-ceiling interiors of the manor house.

“In themselves, the Optica Elites are beautifully soft, with a waterfall bokeh and lovely fall-off. I like the way they breathe when you rack focus, the bowed edge to the images, and the fact that you can bite down to a very shallow depth-of-field. These characteristics made them the perfect complement to the inherent texture film and the way it renders colouration.

“The 50D is noted for its vibrancy of colour and fine grain, and was perfect for our wintery exteriors, especially the rich, orangy flaming torches held by the mercenaries. I loved how the 200T, with its courser grain structure, worked with the exquisite wardrobe in different lighting scenarios, the details it retains in the black and the way too it renders the different colours of flames. 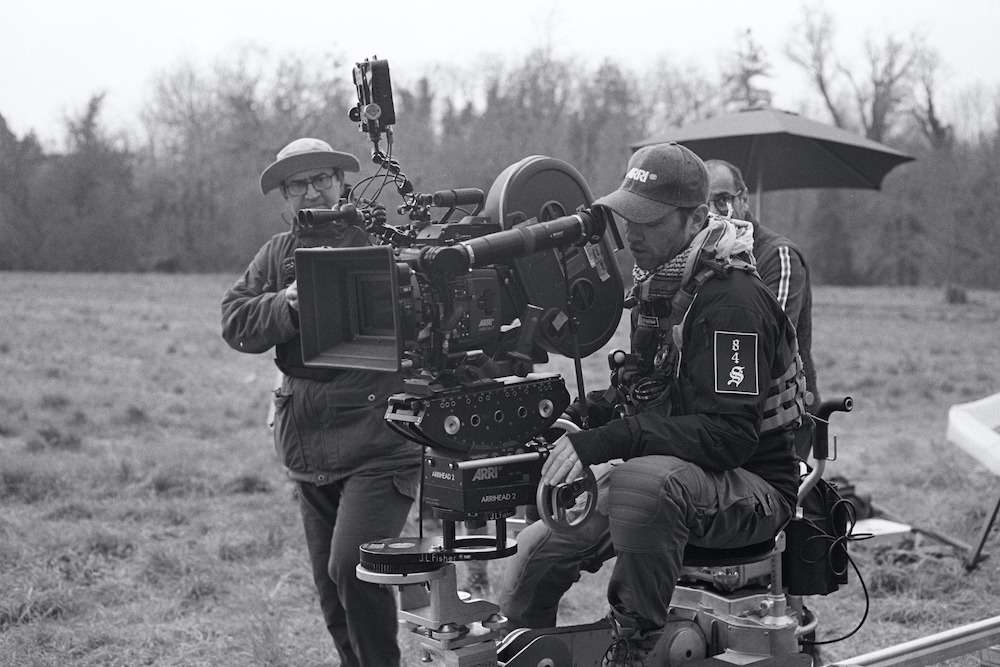 “I call the 500T my ‘see-in-the-dark’ stock. I know people go on about using digital in low-light situations, but we were able to shoot at T2.8 and even T4 with just candles for illumination and it is extraordinary what the 500T could record.  The flickering candlelight itself had detail and never clipped. And, even though the image falls off to near black, there is still a sense of place in the very darkest of scenes.”

Although Ellis had to inject lighting into certain moments in the movie – chiefly daylight through the windows of the dark manor house using HMIs, and a combination of Dino Maxi Brutes and HMIs to illuminate the film’s medical tent scenes – for naturalism, he filmed Eight For Silver in the main using natural/available light.

Accordingly, rather than to use on-set illumination to soften the overall image contrast, and to encourage details in the black and shadowy areas of the image, Ellis revisited a creative exposure technique he was originally taught by one of the true masters of cinematography – double Academy Award-winning DP Freddie Francis BSC (for Sons And Lovers, 1960, and Glory, 1989).

“Freddie was the cinematographer on the All Saints Never Ever music video I directed back in the mid-90s,” says Ellis. “He used an ARRI VariCon flasher on the camera for that shoot, which helped to fashion a sensational image of the band. I learnt first-hand from him how to flash the negative to control the toe of an image, and have used flashing since then on other productions, but nothing like on this scale. I took flashing much further this time, and used it for almost all of the production.”

The ARRI VariCon fits into two filter slots in an ARRI MB-14 matte box. The VariCon uses a variable colour and light intensity source to illuminate a glass filter that fogs the image when filming, thereby raising detail in shadow areas, but without affecting the mid-range or highlights. Ellis used the VariCon for the film’s night exteriors as well as day/night interiors to variously calm down the shadows, and give the exposed 35mm negative a base of softened blacks that could be further manipulated in the lab processing, and during the final colour grade, which were both conducted at Silverway. 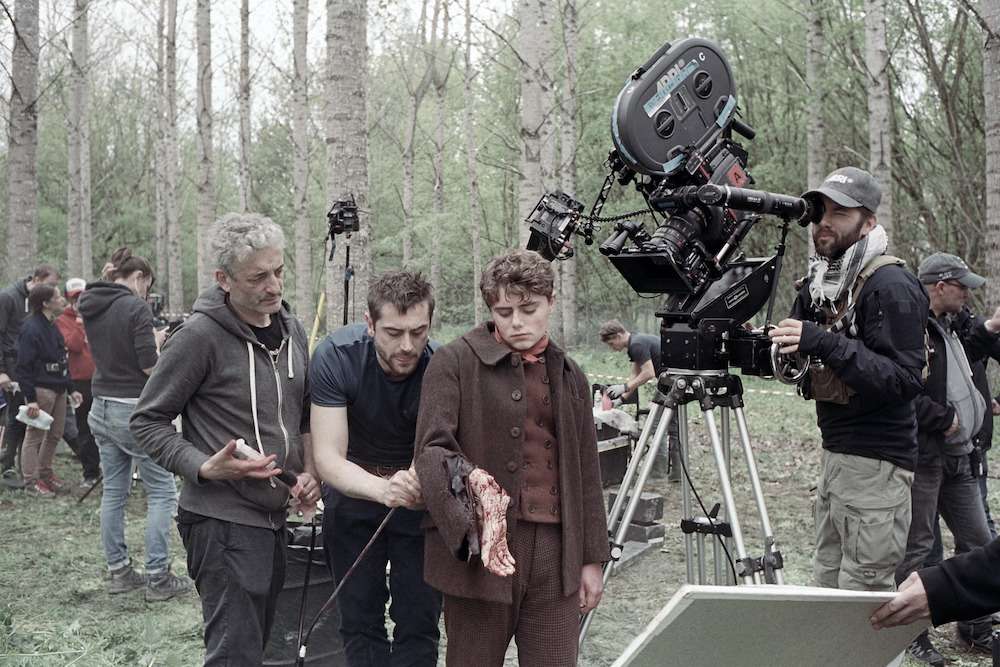 The bleach bypass process, also known as ‘skip bleach’ or ‘silver retention’, is a photochemical effect which involves either the partial or complete skipping of the bleaching function during the processing of colour negative film. By doing this, the silver is retained in the emulsion along with the colour dyes. For Ellis, the resulting images coming out of Silverway had a slightly faded look through reduced saturation, but with increased graininess and moderated levels of contrast.

“The result of my lens, film, lighting, exposure, flashing and processing choices, gave me a very beautiful colour palette and an overall aesthetic that looks distinctive and hugely pleasing to my eyes,” says Ellis.

“Of course, technique is one thing, but collaboration is quiet another,” he declares. “Like the rest of my crew, the team at Silverway were invested in the film throughout – from my initial camera tests to the processing, scanning, dailies and final DI grade. Having pre-established the workflow with my dailies timer Hector Seydoux and colourist Fabien Pascal, meant that when the cast and crew assembled on-set everyday for the shoot, and I started to light the actors in their costumes, I already had a very good idea of how the film would react in different situations and what it would ultimately look like. 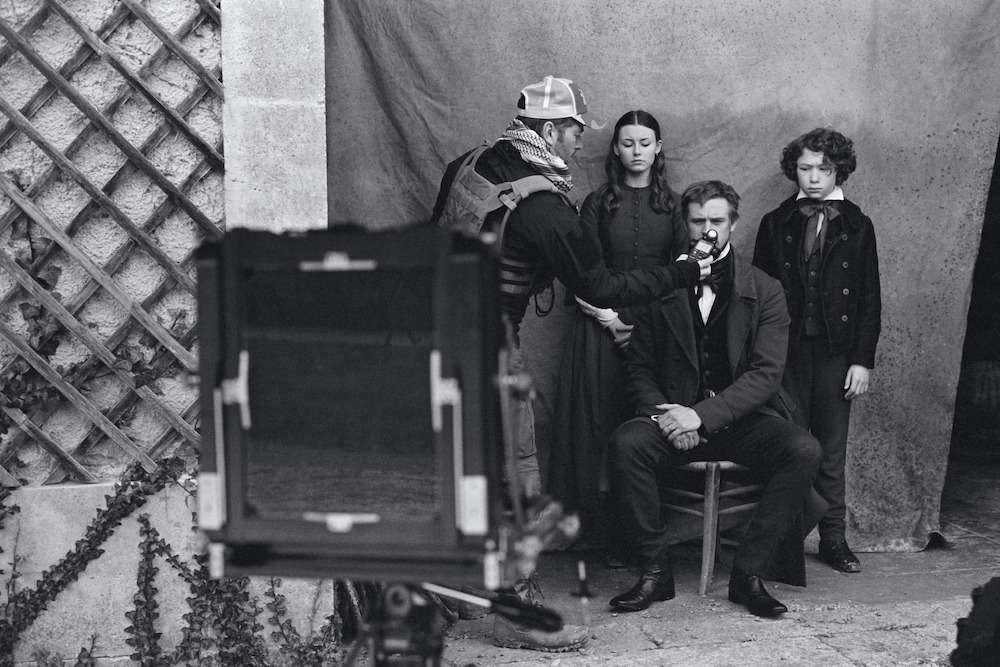 “In terms of the workflow, I had very nicely graded reference dailies back by teatime the following afternoon. Everyday I selected circle takes and then, in good old-fashioned style, I watched them, along with the other heads of department in a local cinema every weekend. It was great for everyone to come together and to see their week’s work on the big screen. It helped to reinforced the bonds between the crew as well as their individual creative investment.”

Ellis concludes, “I am beyond thrilled to have brought the world of Eight For Silver to life on the screen. Like Anthropoid, it is a true indie movie that would not exist without the dedication of all involved.

“I also hope it represents an affirmative signal to emerging filmmakers that film is very much alive and that it is a really special creative option for them to make something truly distinctive.”