A mythic and emotionally charged hero’s journey, Dune tells the story of Paul Atreides, a brilliant and gifted young man born into a great destiny beyond his understanding, who must travel to the most dangerous planet in the universe to ensure the future of his family and his people. As malevolent forces explode into conflict over the planet’s exclusive supply of the most precious resource in existence—a commodity capable of unlocking humanity’s greatest potential—only those who can conquer their fear will survive.

“For every job I do,” says DP Greig Fraser says, “I do extensive testing of lights, cameras and lenses — even for the tools I work with all the time. I’ve talked a lot about Digital Sputnik DS fixtures in the past, but they truly provide a dimensionality and depth of colour that I’ve not found in any other LED source. The source is only RGB, but the camera sensors are only RGB as well. We couldn’t find enough of them for Dune, so we worked with a lot of other fixtures for backgrounds and reserved the DS and Creamsource fixtures for the talent.” 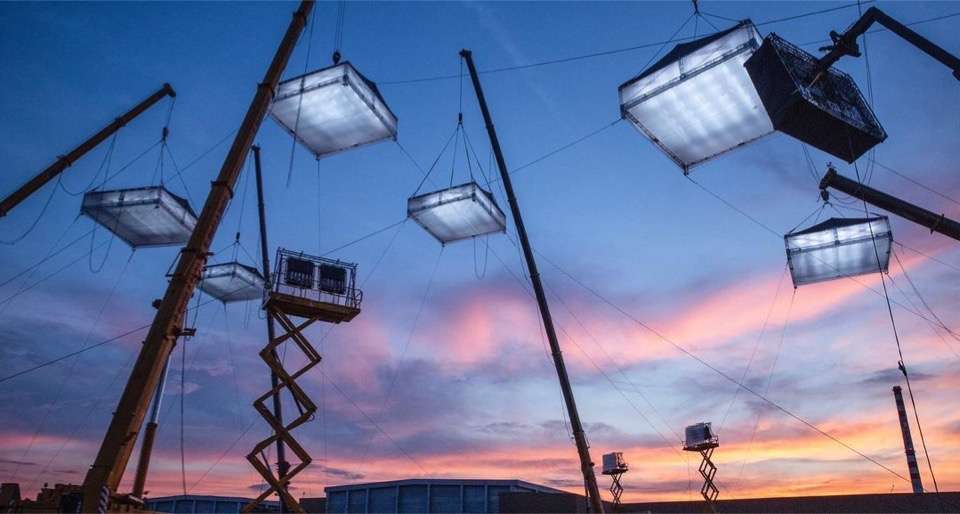 Production took place in 2019 in many beautiful locations: Hungary for interior scenes, desert in Jordan, Caladans landscapes in Norway and Arrakis Dunes in The United Arab Emirates.

Even though desert colours dominate the movie, Fraser, production designer Patrice Vermette and costume designer Jacqueline West created a colour palette to make sure Dune was not monochromatic.

“For example, Patrice worked veins of reds and blues into the sand walls. He — and Jacqueline, who built these subtle gradations of colour into the costumes — both did wonderfully subtle work, and I had to make sure we were capturing those subtleties.” says Fraser.

”The best way to do that is with the best light, and for me, that’s the Sputniks and the Creamsources. My approach was to pull as much colour as possible out of non-colourful situations,” he continues. “It was all subtle differences, not necessarily bold colour contrasts.” 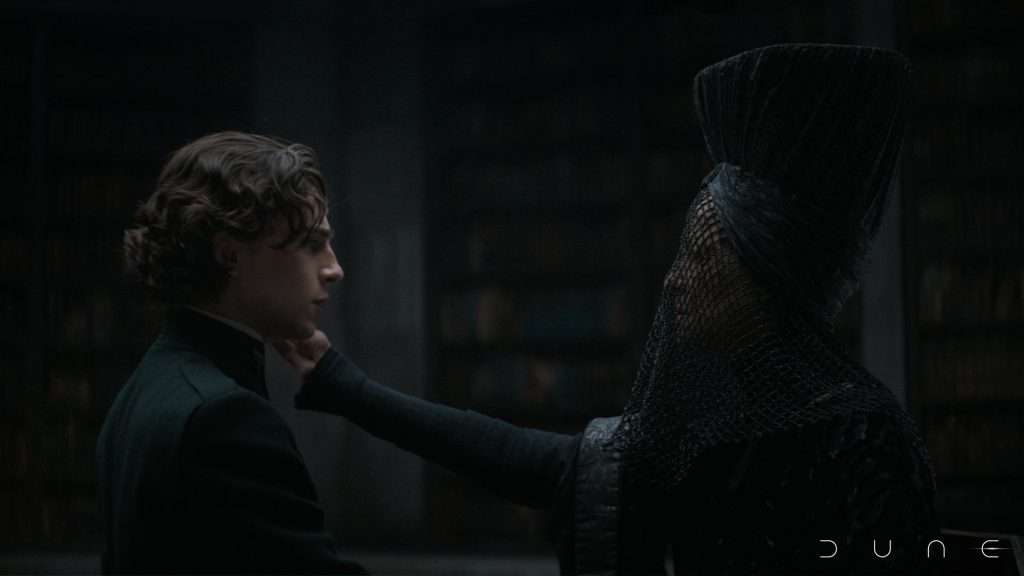 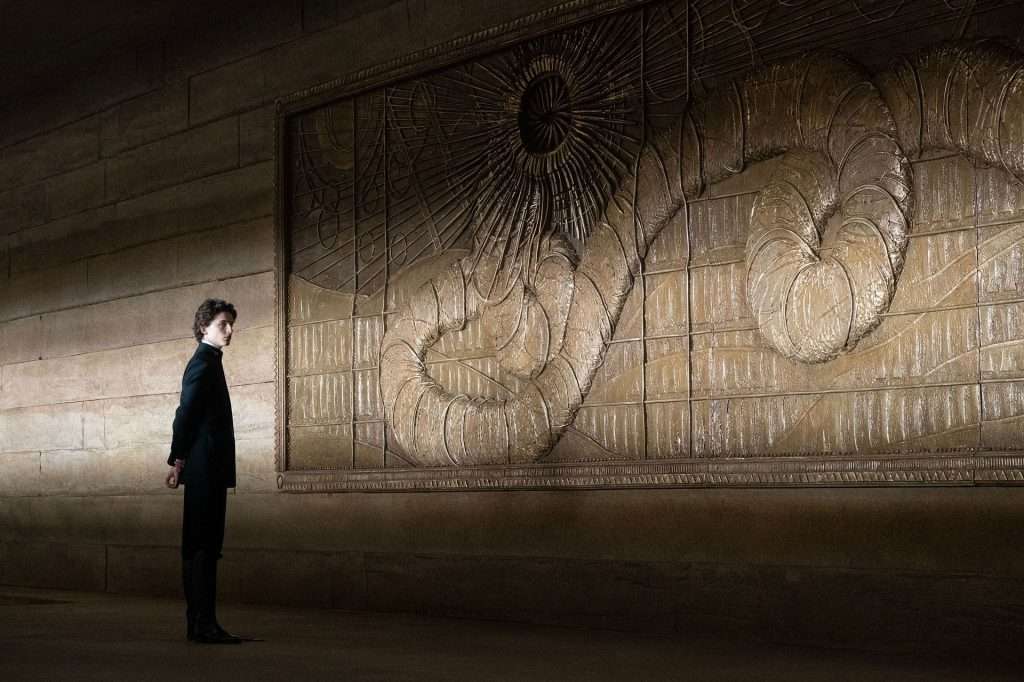 “We colour-graded our light,” says Fraser. “You start to get ‘four-dimensional’ colour by doing that. You have the ability to maximise the key, fill and overall coloration of light that is reaching the sensor. Being able to refine it before it’s recorded really helps us get the right final image.

“Everything is faded and bleached, and I wanted to capture the violence of the sun.” director Denis Neuville commented. “I wanted nature to be powerful and abrasive, not beautiful. It seemed like the best look was to capture the brutality of the planet and cut-out any sense of romanticism about the desert.” 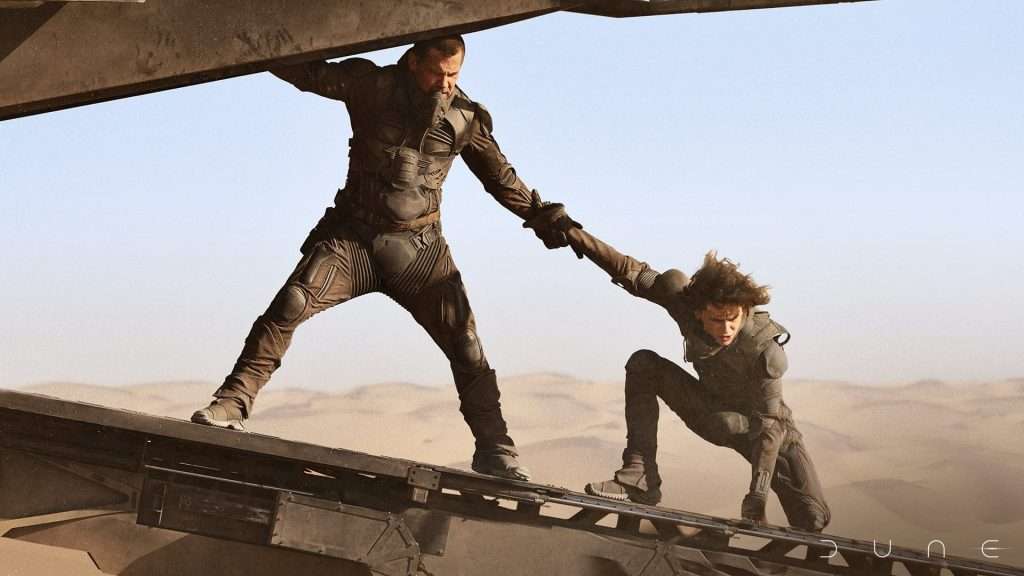 Arrakis is a killer desert. Adapting to Fremen ways is the only chance at survival. “It’s the hottest desert you can imagine,” Fraser says. To emphasise the feeling of oppressive heat, Villeneuve wanted the skies on Arrakis to be hot and hazy without any blue in them.

“We had reference images of these hazy skies from Abu Dhabi, and Denis really loved those. But the reality is we knew we’d have days of clear skies and would get that blue, so we had to find a way to treat the skies — partially photographically and partially in post — to get the look that Denis wanted.”

Senior colourists pulled the blue out of the skies and rolled off the overexposure. “We deliberately went for an unsaturated look. Our skies aren’t blue, our rocks aren’t red, our sand isn’t golden. We designed our LUT to take away the blues of the sky and so on. We actually used several different LUTs and our colourist Dave Cole, and lab, Fotokem, were able to combine the elements of highlights and shadows to create a LUT that worked for us.” 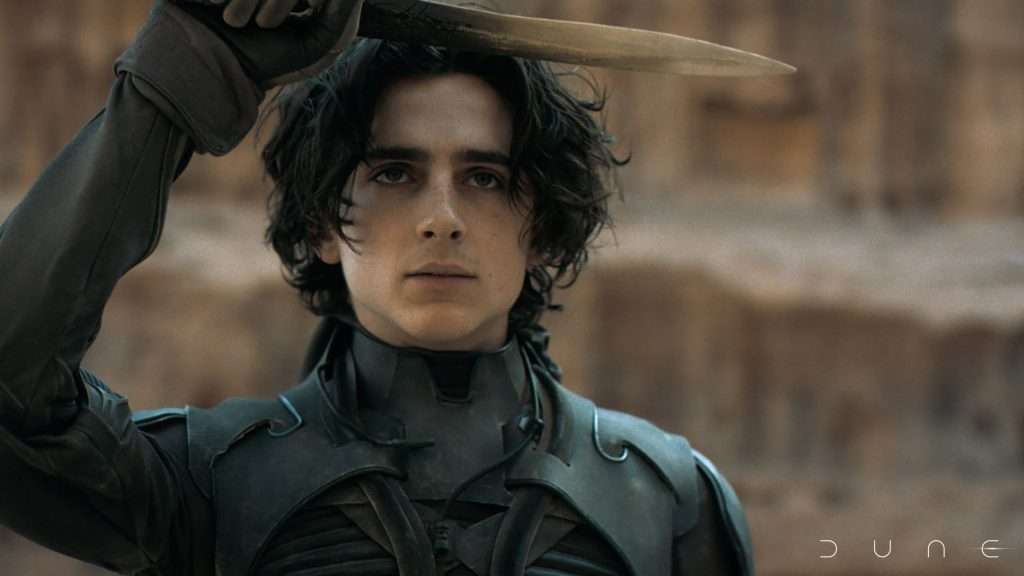 “The other thing that was a very big factor for us was dealing with all the lighting on the stages. I’ve been quite passionate about trying to find LED lighting with the most amount of target.

Effectively we had stone-coloured walls that very easily could have become monochromatic, or just really drab-looking, if we hadn’t got it right. So it was very important to me that I was able to light them with the most amount of colour-depth possible.

I really like using Digital Sputnik LEDs, because they’re a clean source and I feel they have the best colour rendition. We used a lot of studio lights for all the interiors, but we shot with a lot of natural light for all the exteriors. I backlit the actors during the exterior moments, in an effort to avoid dark ‘panda’ eye sockets caused by the bright and contrasty sunlight in Jordan and Abu Dhabi. It’s not hard for the sun to look super harsh.

Trying to find that balance and stay cinematic was still a challenge to ensure the shots weren’t badly lit.” 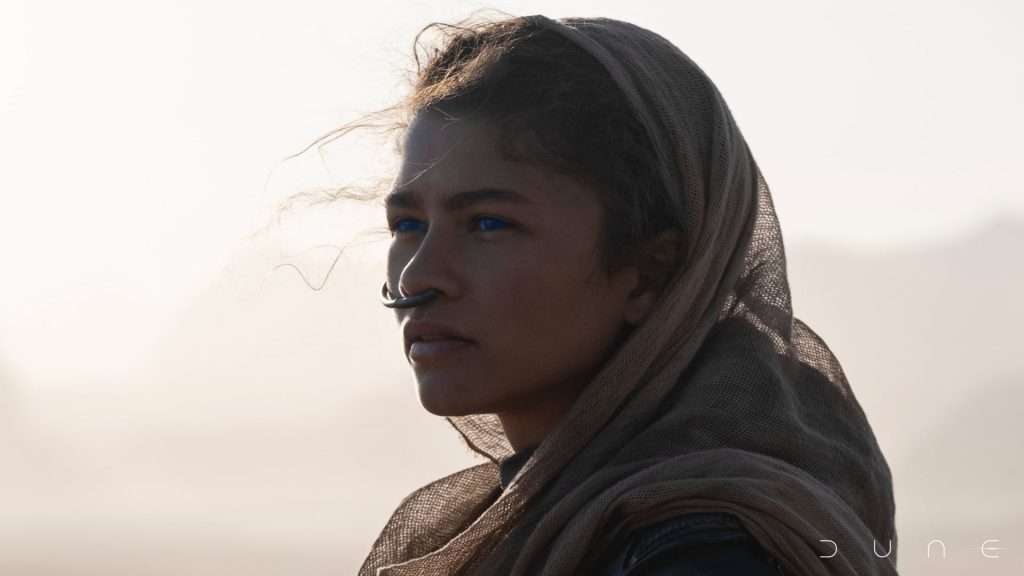 For wide interior shots of the expansive location, Fraser and his gaffer, Jamie Mills, simulated the reflected sunlight with Chroma-Q Studio Force II LED strip lights to provide punch and shape, and a pleasing ambient softness — as well as a distinctive strip of light on the opposite wall that mirrored the conceptual art. For closer work on actors, Mills swapped in Digital Sputnik DS fixtures. 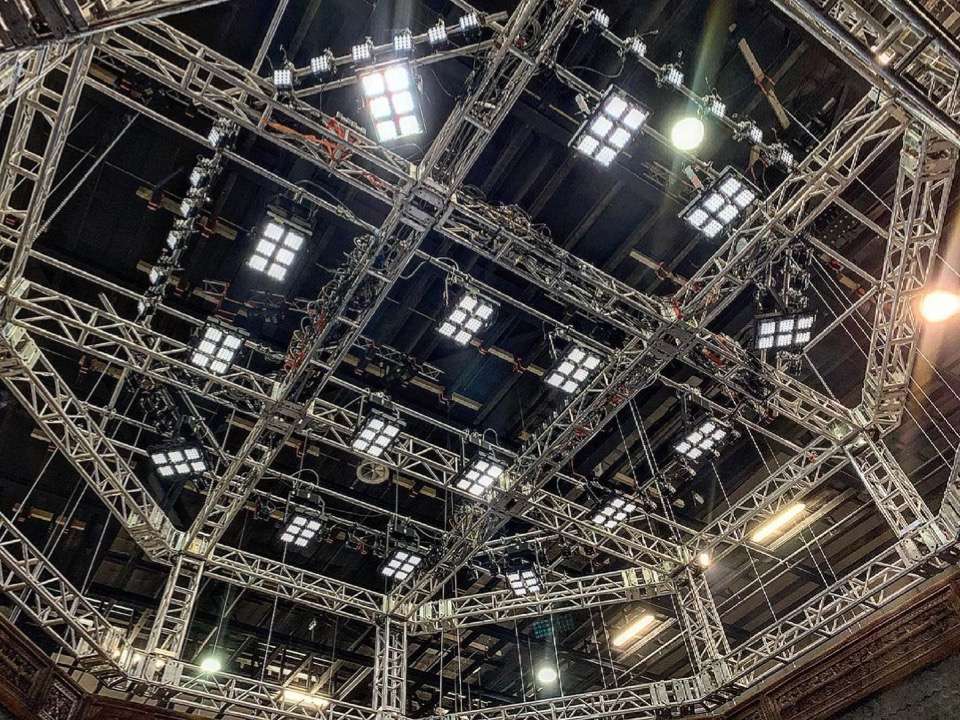 “I saw Dune in an IMAX cinema and I could hardly contain myself. With the soundtrack, the acting, the colour grade and the design, it was an incredible, epic experience, like being on a rollercoaster. Working on Dune was a great collaborative experience with a great team led by Denis, and I’d love to repeat it.” 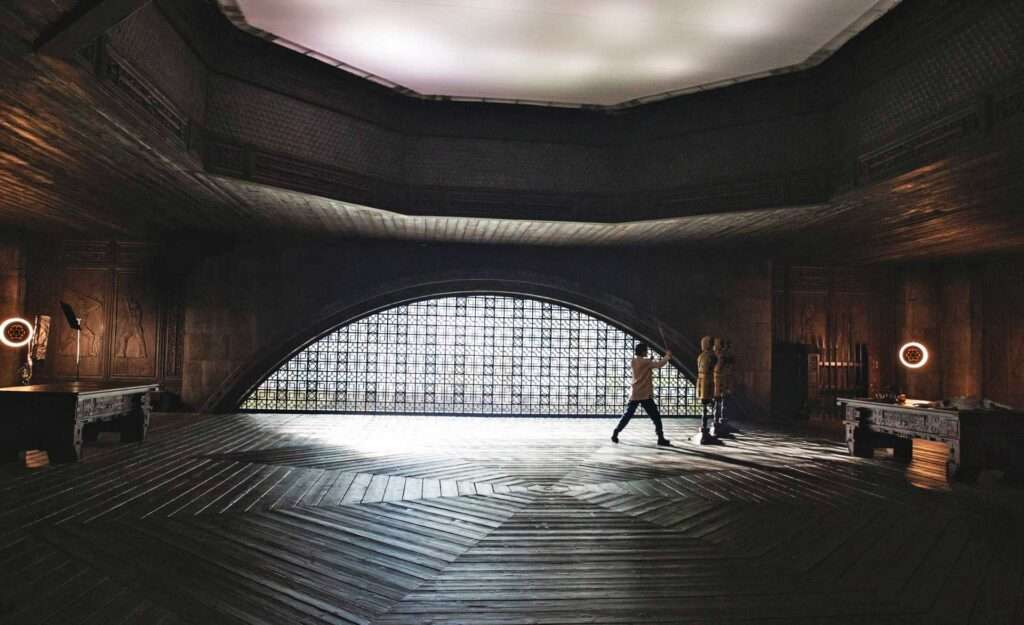