I’m Your Man (Ich Bin Dein Mensch) is a German sci-fi romantic comedy directed by Maria Schrader. It tells the story of a female scientist named Alma (Maren Eggert) and the humanoid robot Tom (Dan Stevens) that was created specifically to make her happy. The film was shot in Berlin during the COVID-19-induced lockdown. Production designer Cora Pratz and cinematographer Benedict Neuenfels worked with Rosco to create a Custom Day/Night SoftDrop that turned the dark and deserted capital into a city bursting with light and life.

An important element of the film is Alma’s flat where she must live with the robot for three weeks as part of a research study. The filmmakers envisaged the scientist living in a typical Berlin house in the city centre with sweeping views of the city’s skyline. Cora said, “We stood on the balcony of one of Maria’s friend’s flats on our first location scout, looked at the Berlin Dome, and we instantly knew that this should be it.”

Capturing the daytime and the nighttime photos of the Berlin Cathedral for the Day/Night SoftDrop.

The only way to achieve the desired view of the Berlin Cathedral was to build a set on a soundstage and create the exterior with a Rosco SoftDrop. “The apartment was very small and on the 12th floor,” Cora said. “We would not have been able to shoot in any location with that kind of view…also because of Covid restrictions. But Sarah went up to that very balcony and took the pictures for our SoftDrop and it worked out perfectly!”

Rosco’s Digital Imaging Specialist Sarah Horton shot the photos for the SoftDrop last summer while the city was on lockdown. “The Berlin night panorama over the iconic Dome Cathedral looked pretty dystopian,” she said. “Everyone was at home and the city was closed for business.”

The final art files used to produce the Day/Night Berlin SoftDrop for the film.

The filmmakers worked with Rosco Digital Imaging to edit Sarah’s nighttime image and breathe light into the dark and lifeless cityscape. Meticulous work was carried out to create a myriad of illuminated windows and brighten the sky to give the sensation of a bustling city full of life. Most importantly, the dome of the Berlin Cathedral was glowing again in all its glory.

The final art files used to produce the Day/Night Berlin SoftDrop for the film.

“Working with Rosco and this wonderful SoftDrop made it possible to create this very special atmosphere in Alma’s Apartment,” Cora commented. “We were very lucky to get the chance to build this set at BUFA Studios and create this view with Rosco SoftDrop.” 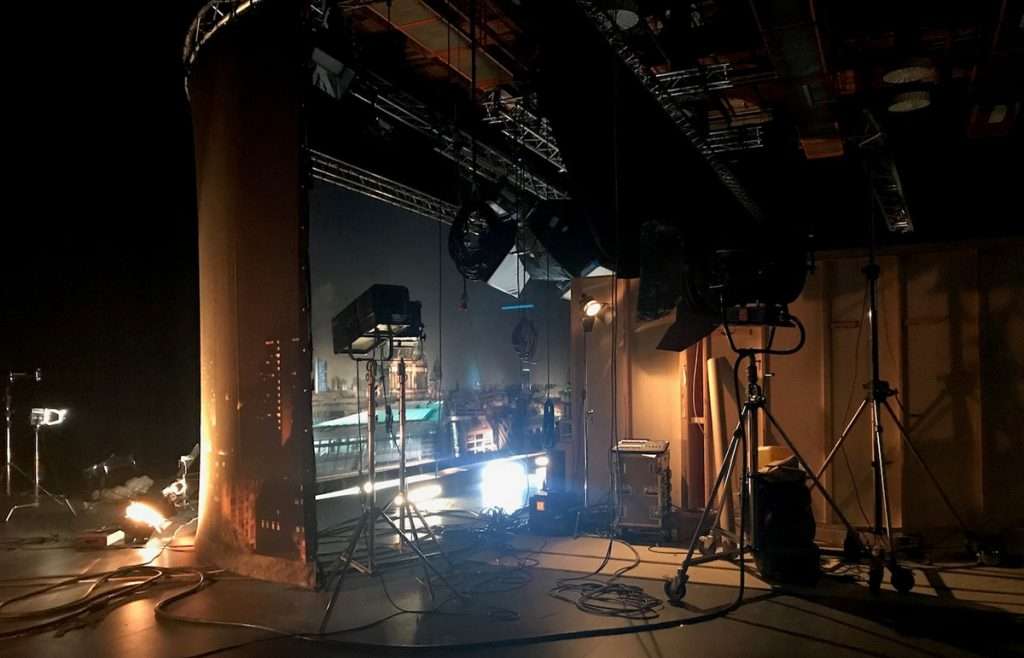 A behind-the-scenes shot of the SoftDrop at work on set.

Maria Schrader, who was delighted with the results that SoftDrop produced while filming her Emmy-winning mini-series Unorthodox, was equally pleased with the outcome of this project. In a note to Sarah, she said: “I thank you and your team from the bottom of my heart for this fantastic work and the extra effort – we value that very much! Now Berlin is lit up in spite of Corona.”

A still from the film showcasing the illuminated Berlin Cathedral outside of Alma’s flat.

I’m Your Man has won various awards, including the Golden Lola for best feature film at the German Film Awards. The film will also be Germany’s submission in the Best International Film category for the 2022 Academy Awards. I’m Your Man is available to rent or buy from many streaming services, including Amazon Prime Video, Apple TV, Google Play, and Vudu.