A fictionalised adventure imagining a friendship between two historical revolutionaries who rebelled against the British Raj of the 1920s, RRR – Rise Roar Revolt – is a large and lusty tiger of a film, leading the charge in Indian filmmaking. Made on a budget of 5.5 billion INR ($69 million USD), RRR is the most expensive Indian film to date. Released theatrically on 25 March 2022, the film took $30 million worldwide on its first day, and went on to gross $160 million worldwide, setting several box office records for an Indian movie. The film reportedly also had 44-million viewing hours on Netflix over a 24-day period when it launched on the streamer. 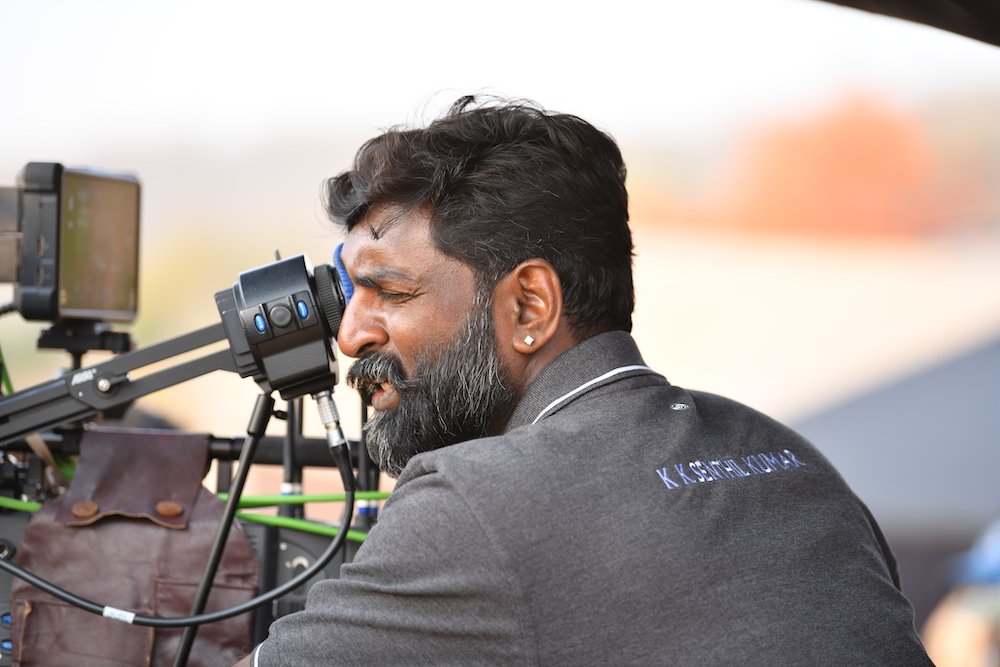 Cinematographer K. K. Senthil Kumar ISC relates how he kept track of such a long and intensive shooting schedule.

“I record very detailed notes of every shot,” says Senthil, “lights, diffusion, camera position, camera height, exposure, focus, everything. Sometimes, if we have to revisit a sequence much later for some pick-up shots or to take some CG plates, I only have to glance through my notes, and I know exactly what we did.”

RRR is Rajamouli and Senthil’s eighth project together, the Telugu director having initially noticed the DP’s debut movie, the low-budget action adventure Aithe (2003, dir. Chandra Sekhar Yeleti). The creative partnership between the two has deepened over the last 18 years, as the movies in their shared filmography have been growing in both scope and budget. RRR, released five years after their last hit Baahubali 2: The Conclusion (2017), which also broke box-office records.

“RRR was a big responsibility. We had to give something better than ever before”

“Our collaboration really pushes the boundaries of Telugu cinema with every film,” states Senthil. “RRR was a big responsibility for us, there were so many eyes watching. We had to give something better than ever before.”

“Bringing visual authenticity to RRR was more important than stylising the film,” he continues. “I had a fair idea how I wanted the film to look, but I didn’t lock the look of the film at the time of shooting. On my films I generally like to shoot clean, then take my time in digital imaging.” 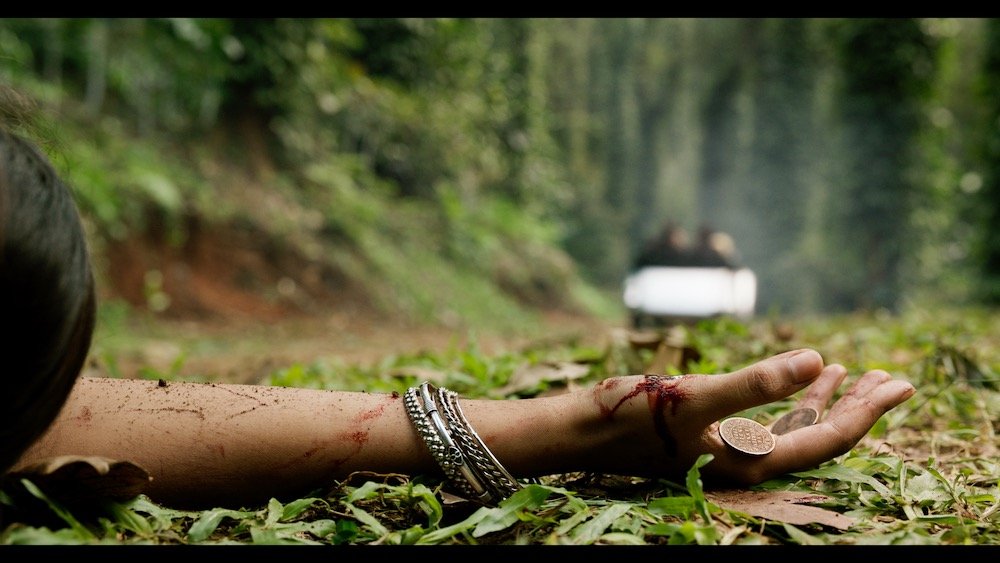 While RRR was in pre-production, ARRI launched is Alexa LF camera and ARRI Signature Prime Lenses. Senthil wanted to explore large format aesthetics, so he tested the combination for RRR.

“I loved the image quality of this combination,” he reveals, “the clean and sharp definition created a whole new look with a three-dimensional feel which was truly immersive. It would also allow us to deliver a film that could be screened in a wide range of formats: IMAX, Cinemascope, 3D and Dolby Vision.”

Aside from action and stunt sequences, where additional cameras and specialist operators are employed, Senthil prefers to utilise a single camera on his movies, which he operates himself. 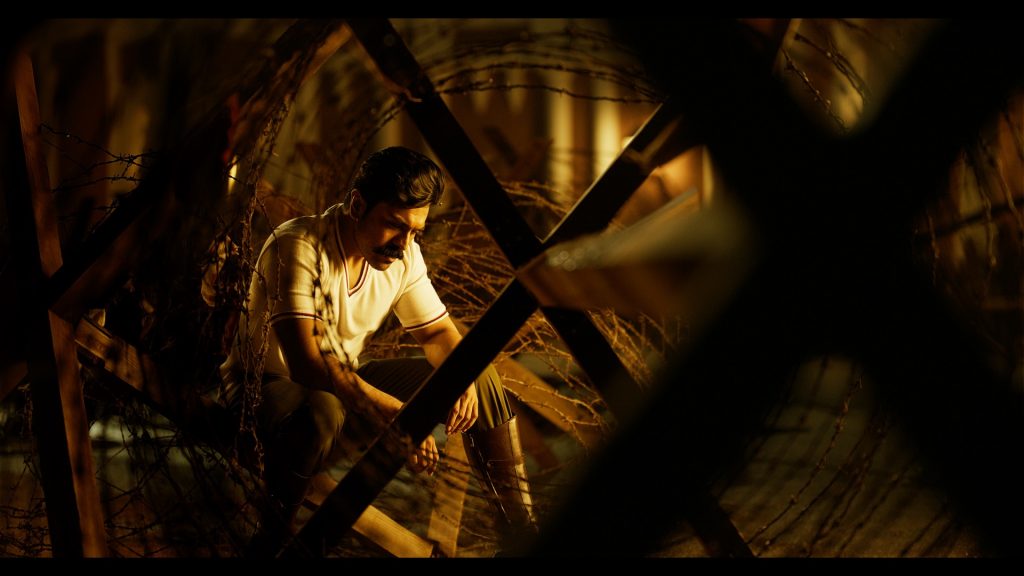 “I don’t like to compromise on my lighting,” he reveals, “plus there is a particular way of capturing an emotional content which, for me, is better achieved shooting with a single camera.”

The production team on RRR had a huge range of grip, crane and stabilisation equipment at their disposal, however as Senthil says, “I don’t like to move the camera without a reason.

“We essentially deal with characters, emotions, drama et cetera,” he philosophises. “The process of creating an emotionally-stimulating image using these things is very organic and intuitive. No certain movement can translate directly to a certain emotion, it’s about the personal choices we make.

“In the pre-production stages I had long talks with director Rajamouli, production designer Sabu Cyril and VFX supervisor Srinivas Mohan, about how the film would be done. Certain sequences were storyboarded and pre-visualised, plus we did lots of test shoots. Based on this preparation it was decided what worked for us and what did not.” 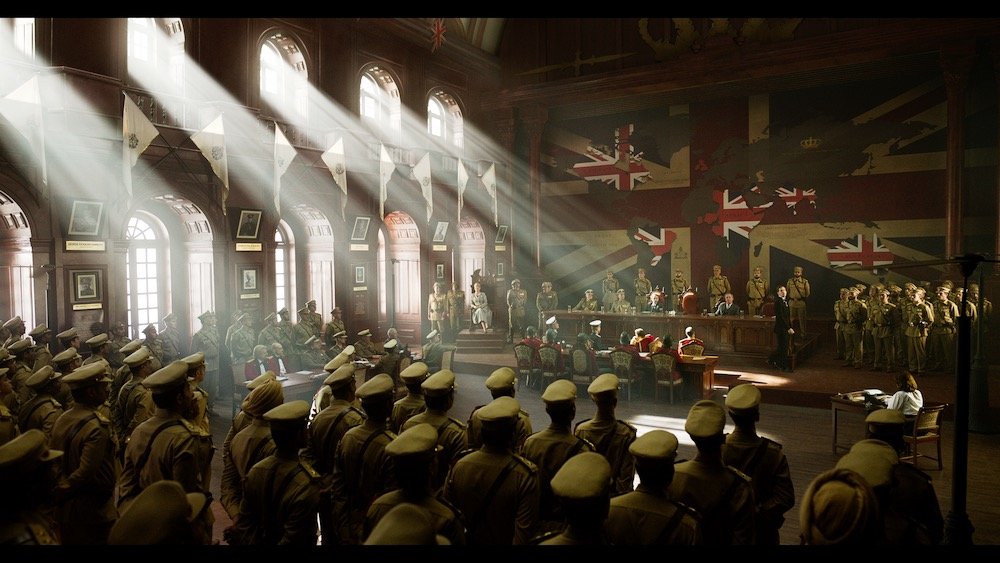 Around two-thirds of RRR’s storyline occurs during the hours of darkness, with many nighttime action and fight sequences involving thousands of supporting artists. Lighting the huge set pieces involved 20ft x 14ft x 10ft truss boxes skimmed with Chimera cloths, packed with Dino lights and drawing more than 1250kV of power, hung on cranes at over 120ft. Real fire was utilised to illuminate the action sequences, “to give the feel of fire all around,” describes Senthil.

“I did try to keep it as simple as possible,” he confides. “We were shooting a very complicated film which unfolds on a grand scale, so I didn’t want to complicate my job. I trid to follow the KISS principle: ‘Keep It Simple, Stupid’.”

Interior lighting was largely source-inspired, although Senthil did allow some augmentation of the light for dramatic purposes.

“Large, super-soft sources of light were my preferred way of lighting the stars”

“In certain shots, I used specular lighting,” he details. “In one scene, where the British police are having a meeting, streaks of light created in the studio helped to heighten the drama. Then there was a meeting of all the revolutionaries who were planning their next move; I used hard light and contrast to heighten the emotions in that scene.”

These strategies must be balanced with how Senthil prefers to light the principal cast. 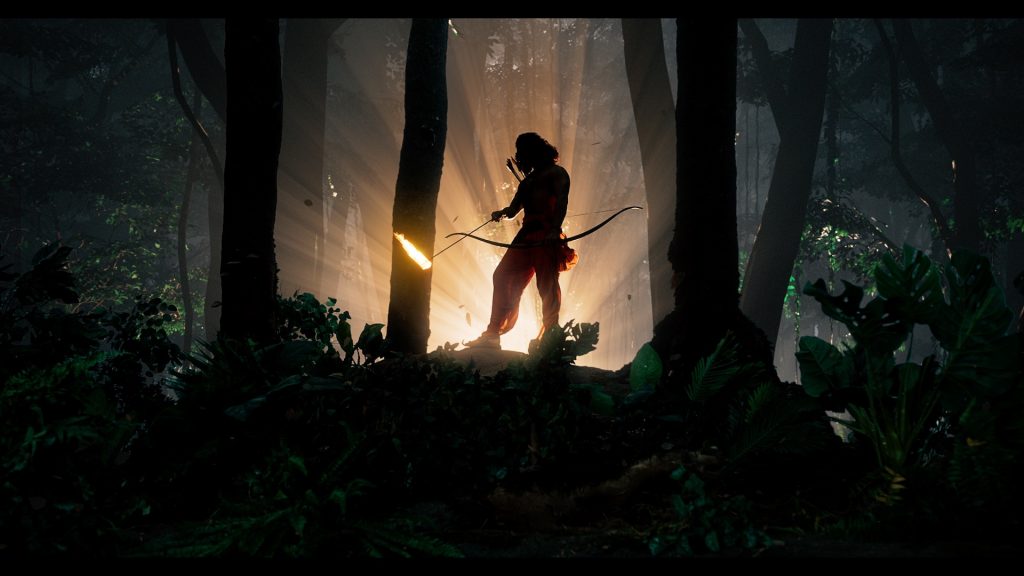 “Since RRR is a commercial film and the audience have come to see Indian superstars, I wanted the actors to look – if not glamorous exactly – then at the least extremely pleasing, especially in close-up,” he confides. “Large, super-soft sources of light were my preferred way of lighting the stars.”

One of Senthil’s favourite sequences is when Ram, one of the film’s two principal characters, is first introduced. Thousands of dissidents are agitating outside a police station, and Ram – at that moment an officer guarding the imperial rulers – is emotionally-driven to arrest a particular stone thrower. 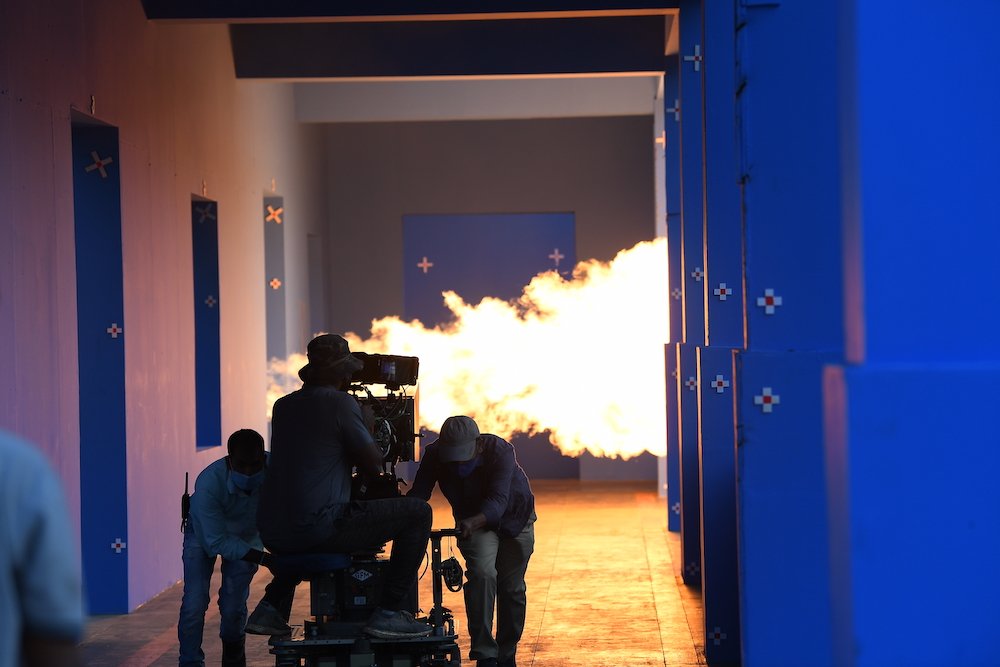 “When Ram goes inside the crowd the camera follows,” Senthil describes. “I wanted the audience to experience his point-of-view, to feel the claustrophobia of being surrounded by an unruly mob.

“To achieve this, we used a lot of handheld shots based on the pre-visualisation of stunt choreographer King Solomon, combined with carefully-planned wide shots and dramatic movements of the camera. That sequence was extremely challenging, but it came out really well and is a completely unique experience for cinemagoers. They won’t have seen anything quite like that before.” 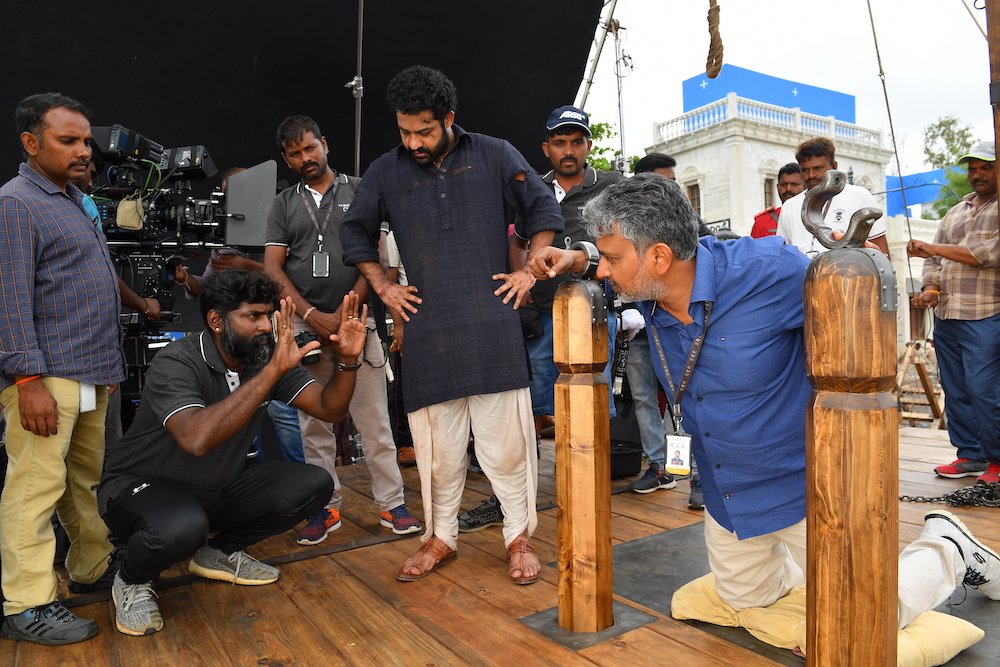 Theatre audiences watching RRR in Indian cinemas would typically be treated to a 10-minute interval, halfway through the film’s three-hour run time. The script is sculpted to deliver a cliff-hanger ‘Interval Scene’ to conclude the first half, involving a confrontation between Ram and Bheem, the two lead characters.

“We wanted it to be a grand affair with well-choreographed action and spectacular visuals,” describes Senthil.

This sequence is loaded with powerful slow-motion imagery such as Bheem leaping from a moving truck surrounded by a halo of wild and fierce animals, Ram entering the palace in a burning chariot and the two standing-off, with one framed by water gushing out from the broken fountain verses the other with fire crackers bursting in the background, all loaded with close-ups of the lead actors, “not to miss the emotions,” as Senthil stresses. 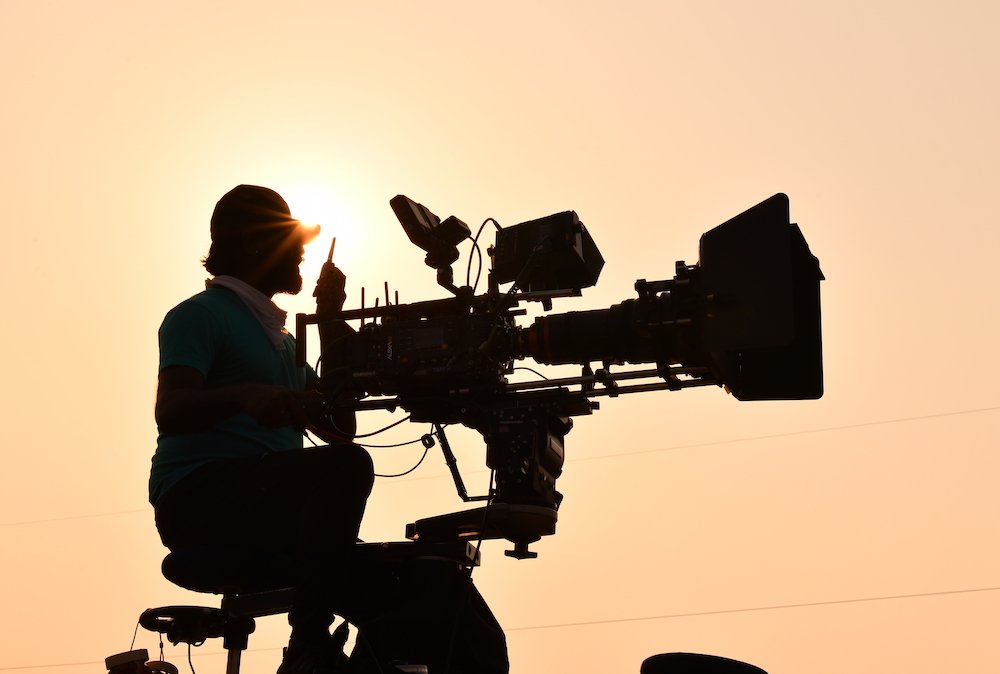 “With ever-changing technology the role of a cinematographer is becoming extremely challenging,” he confides. “We used various techniques to help the cast know where the CG animals existed virtually. For instance, radio-controlled cars were used to replicate the movements of the animals, and with Ncam visualisation technology, I could see the CG animals in my monitor. This aided the production with real-time camera tracking.”

Though no stranger to VFX, having shot effects-heavy movies like Arundhati (2009), a horror fantasy film about a brave queen who battles an evil mystic, and Eega (2012), in which the murdered protagonist is reincarnated as a housefly, the interval scene in RRR still tested Senthil.

“Previous experience certainly helped me,” he concedes, “however it was still extremely challenging, and we shot for nearly 70 nights. I’m very happy that we pulled it off. It is now one of the most talked about sequences in the film.”

Despite moving in the upper echelons of the Indian filmmaking industry and being committed to long shooting schedules, Senthil’s family help him keep his feet on the ground.

“My wife Ruhee, and my children Ryaan and Dhruva, are very supportive,” he says warmly, “the moment I am with them I begin to unwind. They make sure I don’t think about what happened that day so I can properly relax. Then I am ready to go again.” 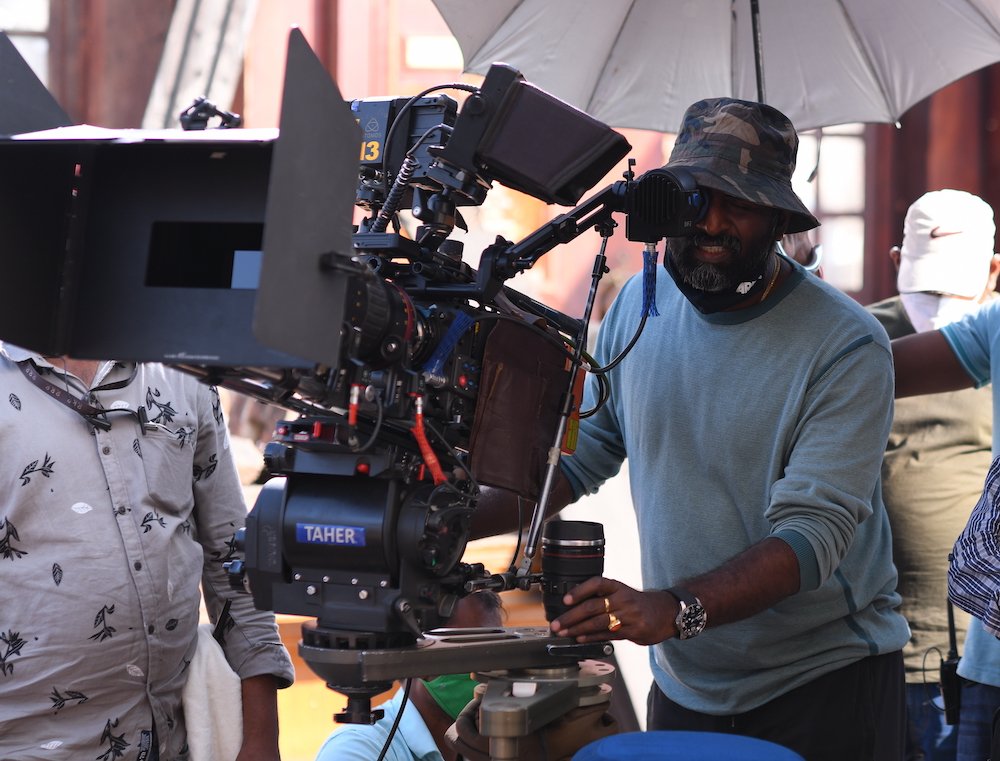 Senthil’s next film sees him supporting second-time writer/director Radhakrishna on an emotional family drama. Before shooting commences, Senthil and his team will perform the traditional ritual of breaking a coconut, to mark the auspicious occasion.

“Then every morning, first thing, I pray to God,” he confides, “and ask that everything will go according to plan, and that I will deliver to the best of my ability.” 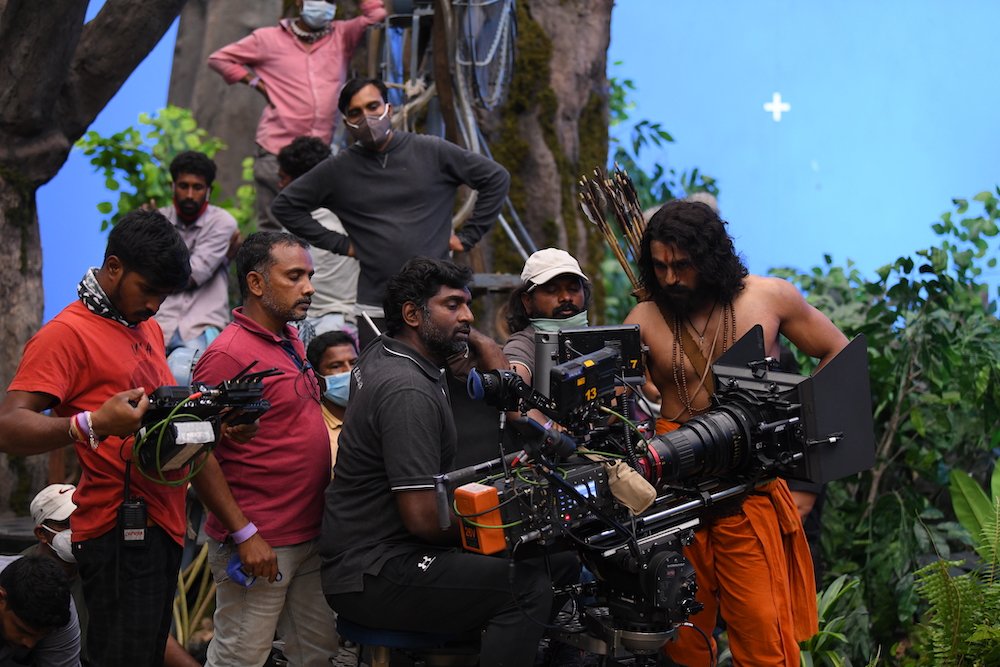