David Fincher’s black-and-white tribute to Old Hollywood took a radically different approach to the role of colour in design.

In the annals of Hollywood, Herman Mankiewicz will forever be remembered as the screenwriter of Orson Welles’s towering classic Citizen Kane, but his impact on the history of cinema doesn’t stop there. Mankiewicz also served as an early, uncredited writer on The Wizard of Oz. His contribution? Suggesting that once Dorothy Gale travels over the rainbow, the film transitions from black and white to glorious Technicolor. “He walked away from that [project] saying, ‘This is all I can come up with,’” laughs director David Fincher. “It might be the greatest special effect in the history of the movies.”

For Mank, Fincher’s backstage drama about the screenwriter’s life and his work on Kane, the director and his creative team journeyed from a world of colour to one rendered entirely in black and white, shooting eye-catching sets and costumes with the RED 8K Helium Monochrome camera. That created an interesting artistic puzzle for Fincher and his collaborators to solve. From cinematography and production design to costumes and hair and makeup, each department needed to determine the best way to manipulate colour to achieve the proper register of lights and darks onscreen.

“We had to train our senses to see through a lens of black and white,” explains Oscar-winning production designer Donald Graham Burt (The Curious Case of Benjamin Button). “It mandated a palette based on tone and contrast.”

Fortunately, they proved more than up to the challenge. 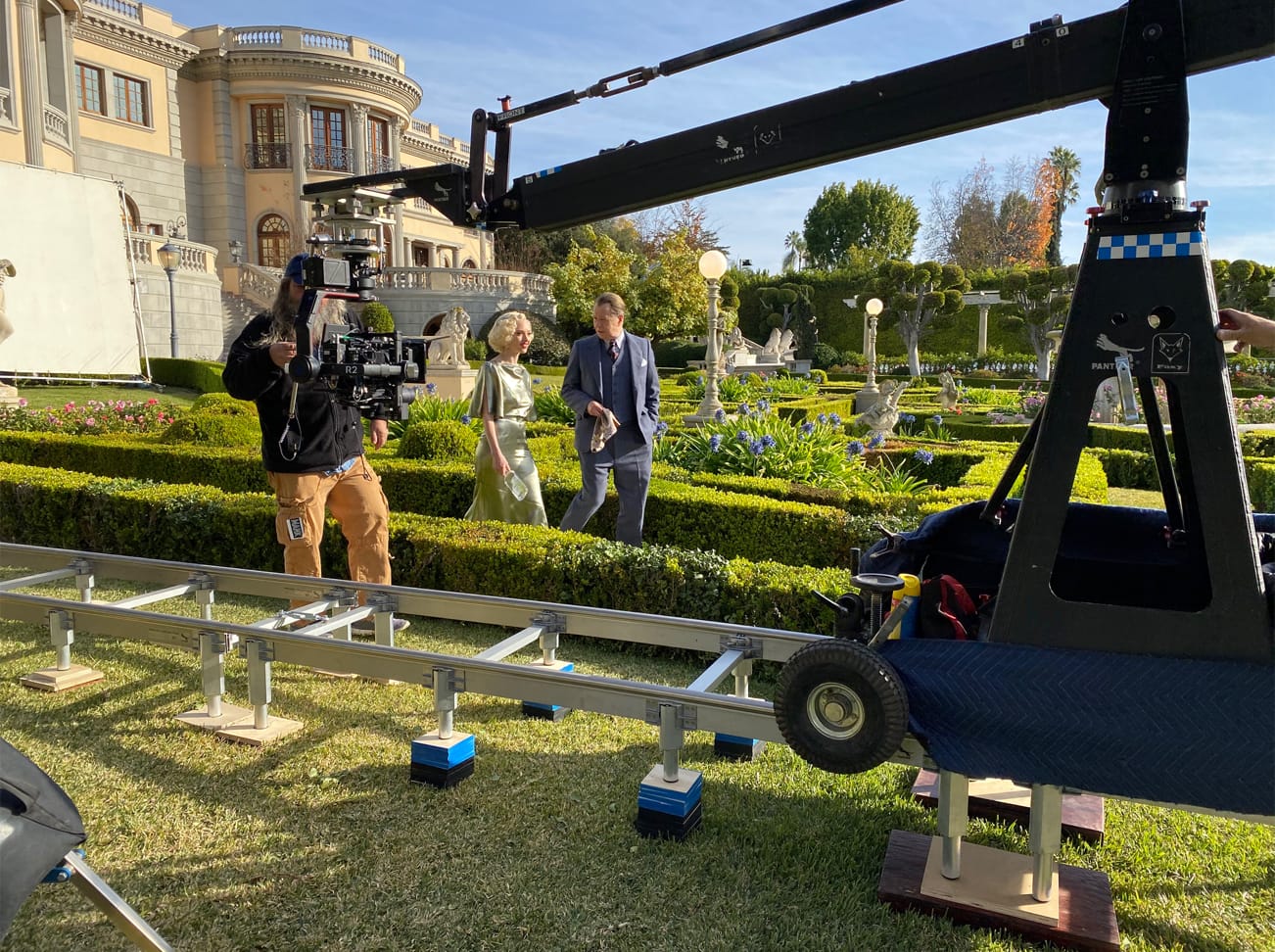 Remarkably, Mank is cinematographer Erik Messerschmidt’s first feature film as a cinematographer — he previously worked as a gaffer on Fincher’s thriller Gone Girl and as a director of photography on several episodes of his acclaimed Netflix series Mindhunter. Messerschmidt and Fincher briefly toyed with the idea of shooting the film in color and then converting it to black and white in post-production, but after several camera tests, they became convinced that shooting in black and white would yield a far more dramatic result. “There was no question — it was such a staggering difference,” Messerschmidt says. “There were other advantages that were unforeseen in the beginning. The camera’s so much faster, which helped us because we were doing all this deep focus photography, and we needed more lights — the faster camera really helps with that. I mean, it just had this silvery kind of gelatin print depth to it you do not get when you do saturate colour, I think.” 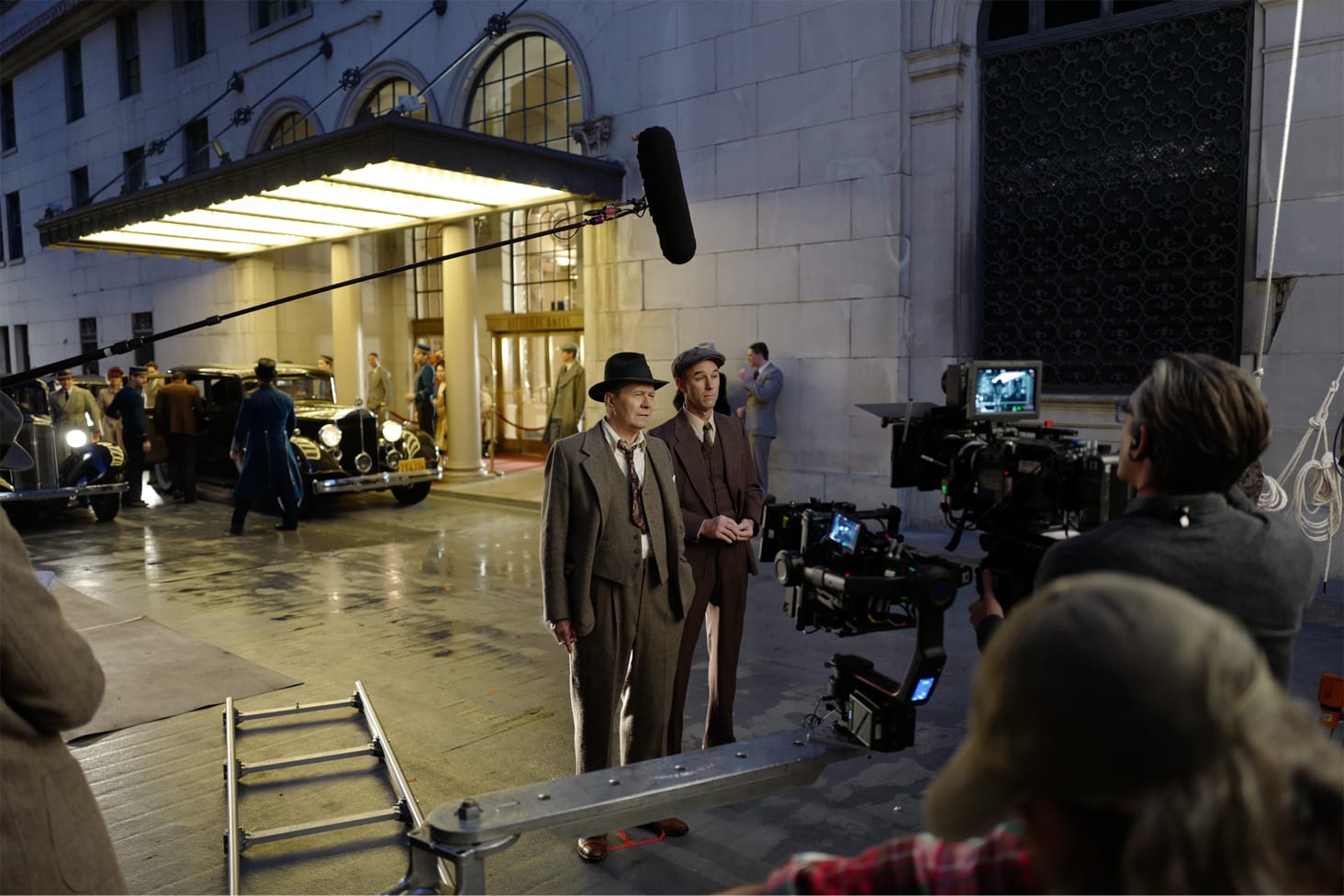 Shooting using the classic Hollywood technique day for night — especially for the memorable walk-and-talk scene between Mank (Gary Oldman) and the actress Marion Davies (Amanda Seyfried) on the grounds of Hearst Castle — was never up for debate, though the choice didn’t come without concerns: “I haven’t slept more poorly before a shoot than I did those three or four days shooting day for night at Hearst Castle because I was so scared that the sun wasn’t going to come out,” says Messerschmidt. “We were definitely rolling the dice. But we could have never put the camera where we ended up putting it had we had to actually light it because we would have been so limited in capturing the actors’ movements.”

Although Fincher and Messerschmidt agreed that the dramatic lighting style cinematographer Gregg Toland had employed for Kane wasn’t necessarily right for Mank, they did choose to include nods to the classic film. “Citizen Kane has very few traditional cuts,” Messerschmidt says. “Instead of normal lap dissolves, Welles and Toland used theatrical-style lighting cues as transitions — where the background lights were dimmed out slightly earlier than the foreground. David and I liked the idea of using this technique as a transition for the flashbacks. A bit of homage, I suppose, but it felt appropriate.” 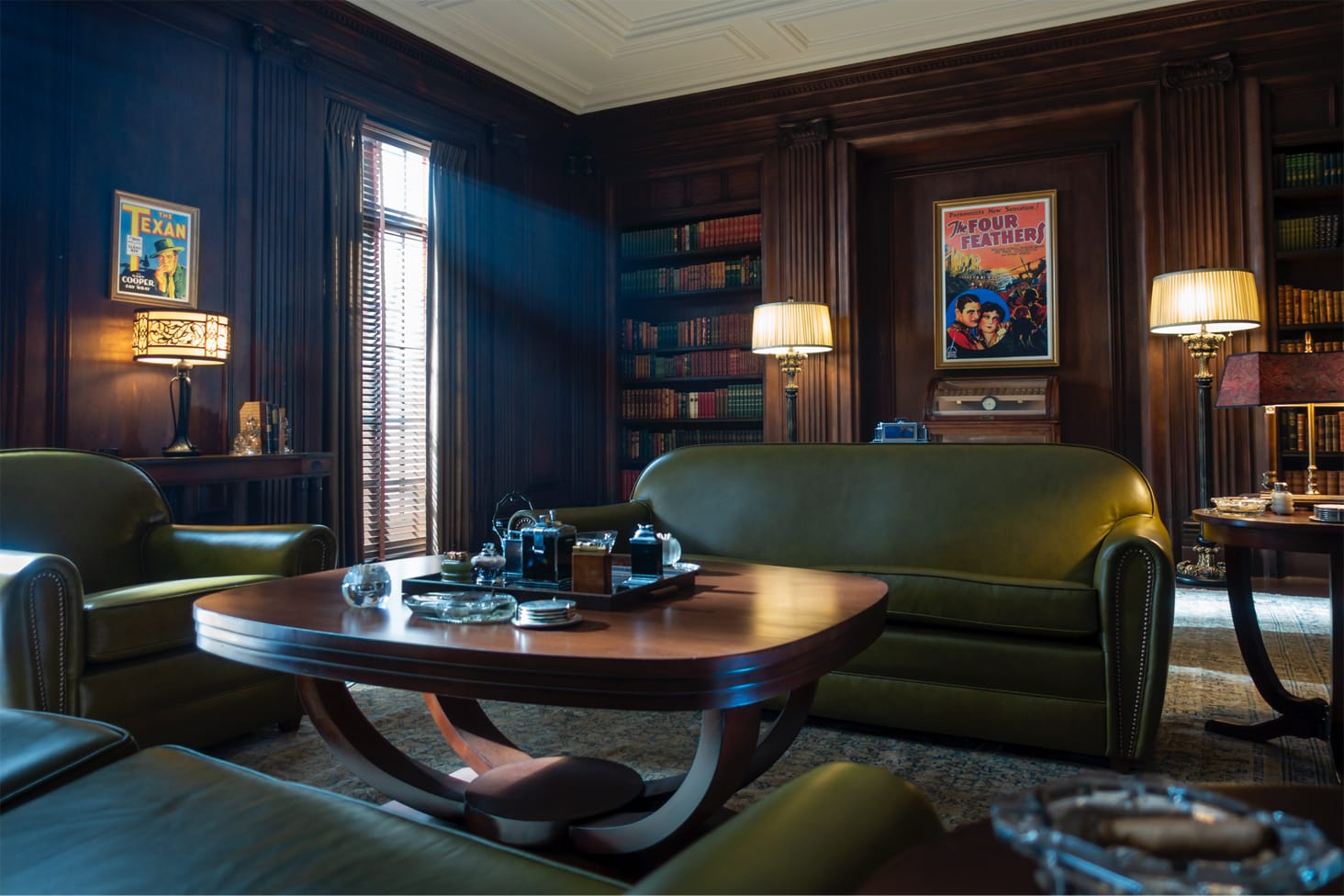 For Burt — who won an Oscar for his work on The Curious Case of Benjamin Button and also designed the sets for Zodiac, The Social Network, The Girl with the Dragon Tattoo, House of Cards, and Gone Girl — the first step in determining how specific colours would translate onscreen was to look at black-and-white photos of the film’s various shooting locations. “That set a foundation for seeing the world in a monochromatic format — especially when viewing locations that were so familiar in Los Angeles,” Burt says. “I remember early on just walking through my neighborhood photographing houses, fences, walls, any structural element, with the purpose of seeking a variety of colours and tones and printing these images for comparison to get a better understanding of how colour translates.” 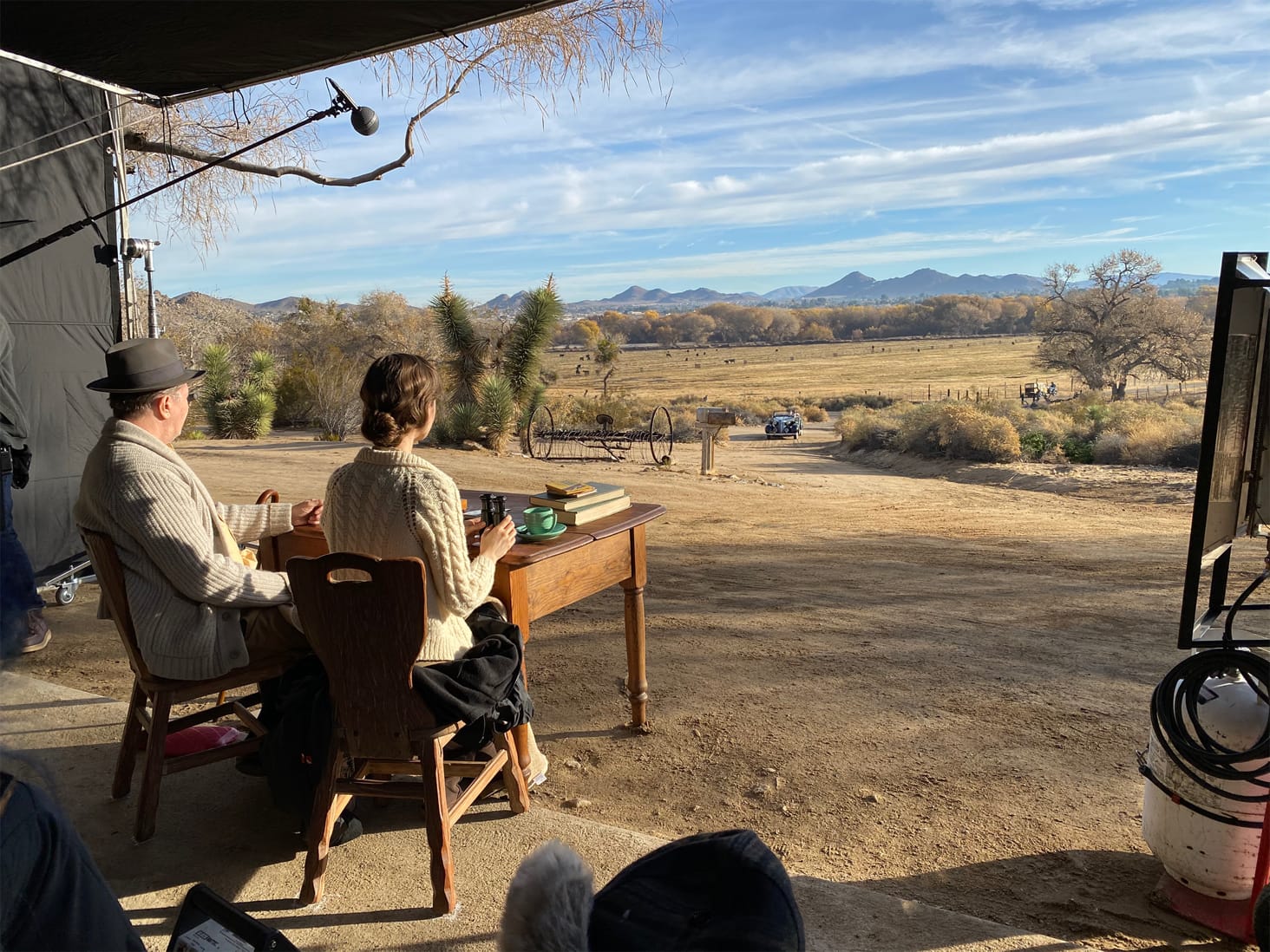 And just because a certain colour might look stunning in black and white didn’t mean it was necessarily right for the spaces that Burt and his team were designing and decorating. In the end, Burt’s research led him to neutrals including mustards and a variety of grays that looked appropriate on set and also popped onscreen. “Certain colours were not appropriate for many of the interior stage sets,” he says. “For instance, we found that violet, pink, and orange translated to black and white quite well. But I didn’t want to make these sets into Fauvist paintings [where] the walls are green and the table is blue. Because when your actors come into it, all of a sudden, they’re going to feel they’re in a funhouse.” 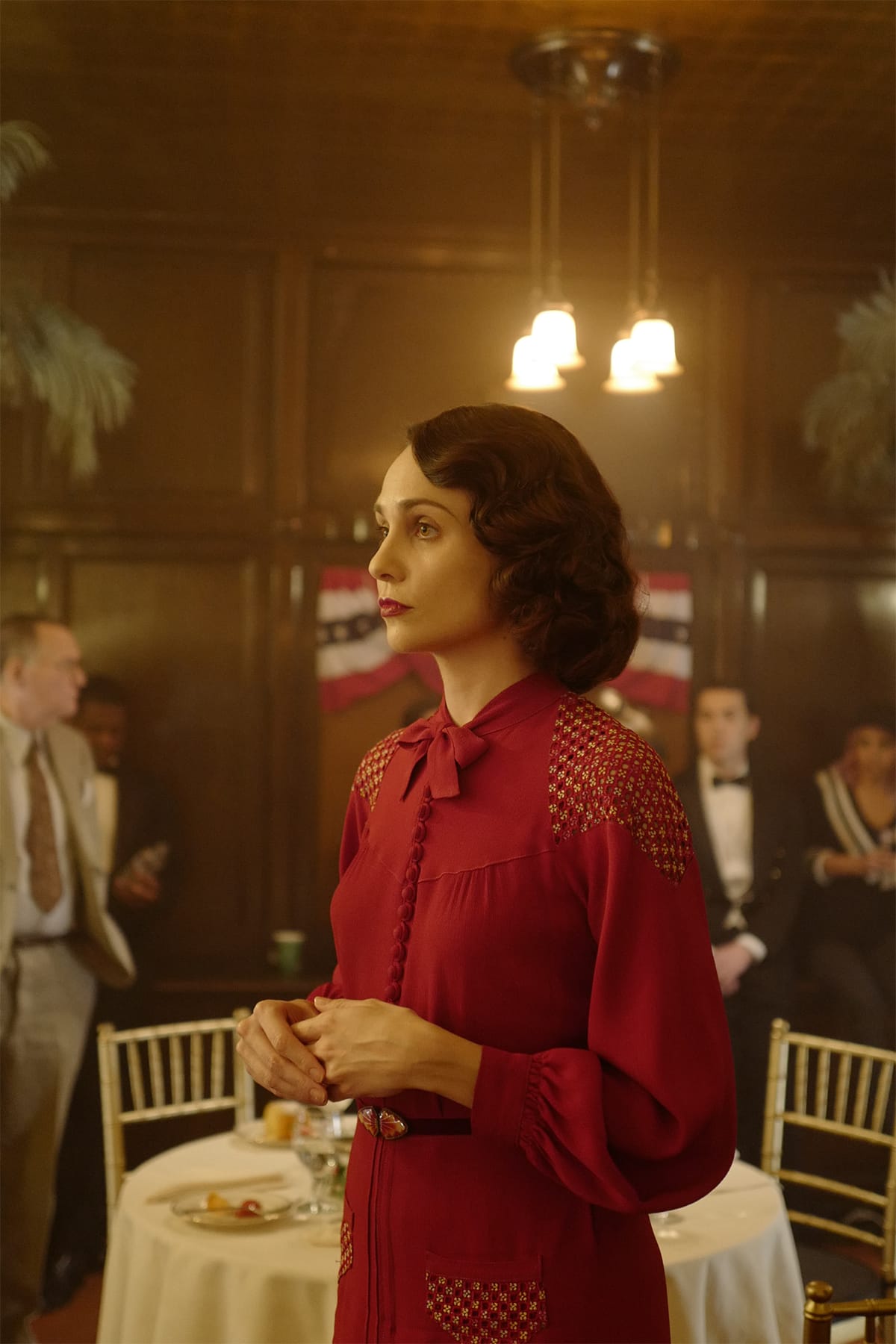 Summerville is another Fincher veteran, having previously worked with the director on Gone Girl and The Girl with the Dragon Tattoo.She, too, conducted a series of tests to determine what colors and fabrics would read well onscreen. “Every project has its challenges, but filming in black and white presented a very unique set of circumstances.” she says. “Early on, when we started ordering fabrics, and purchasing and pulling clothes from rental houses, I would line things up and shoot them in three black-and-white settings on my phone and send them to Fincher. His response: ‘Shoot it in noir.’” 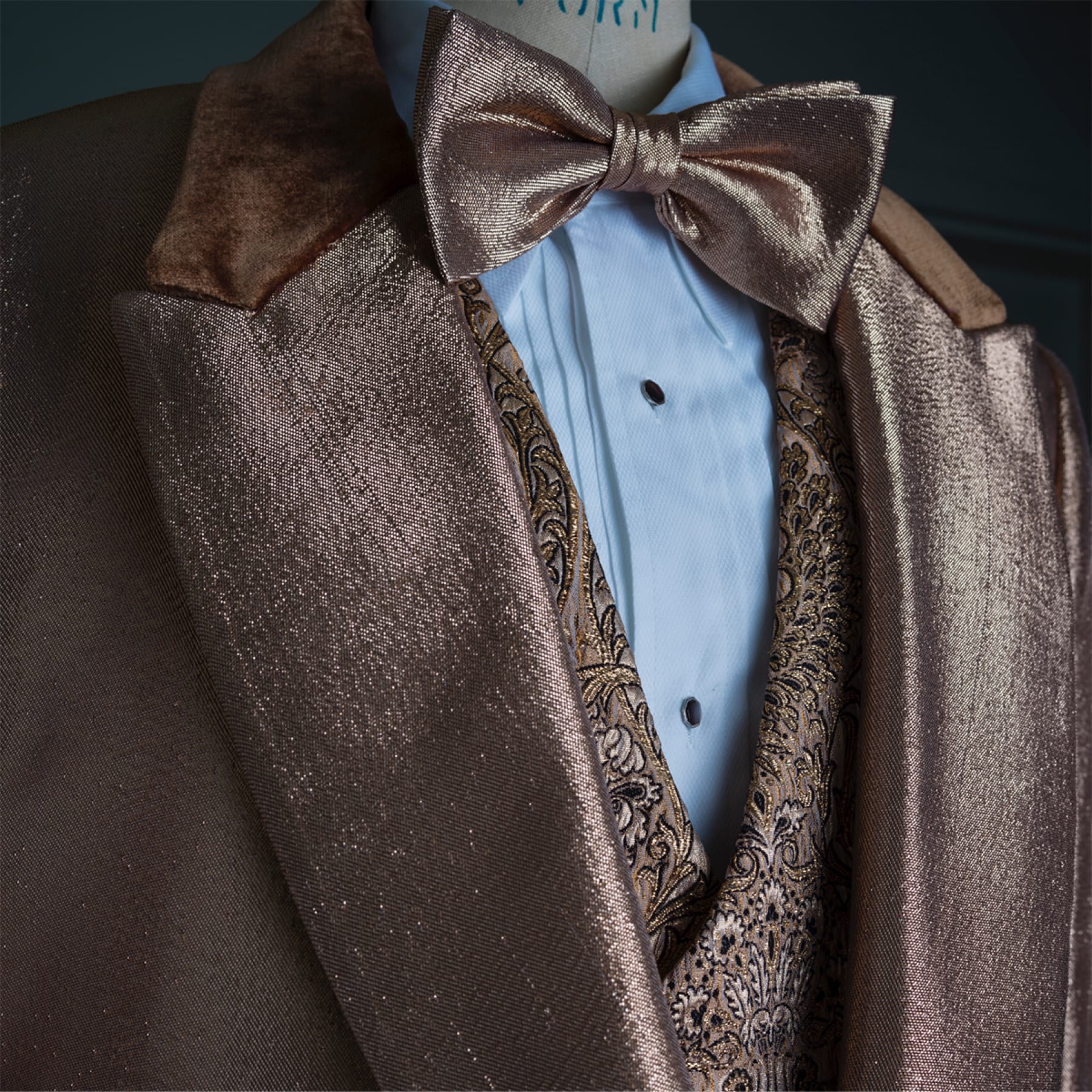 Photographing the same pieces again using the noir filter — which creates the look of high-contrast, black-and-white film noir — yielded surprising results that helped the costume designer hone in on precisely the right approach. “I had to adjust my perspective, be very specific and find very tonal prints,” she says. “It was interesting and fun to discover what worked and what didn’t. You couldn’t do anything that was high contrast. It made me hyperaware of why so much of the clothing, especially for women of that time period, were these really odd chartreuses and salmons and greens. Colours like that were prevalent on set because, onscreen, they come out so beautifully.” 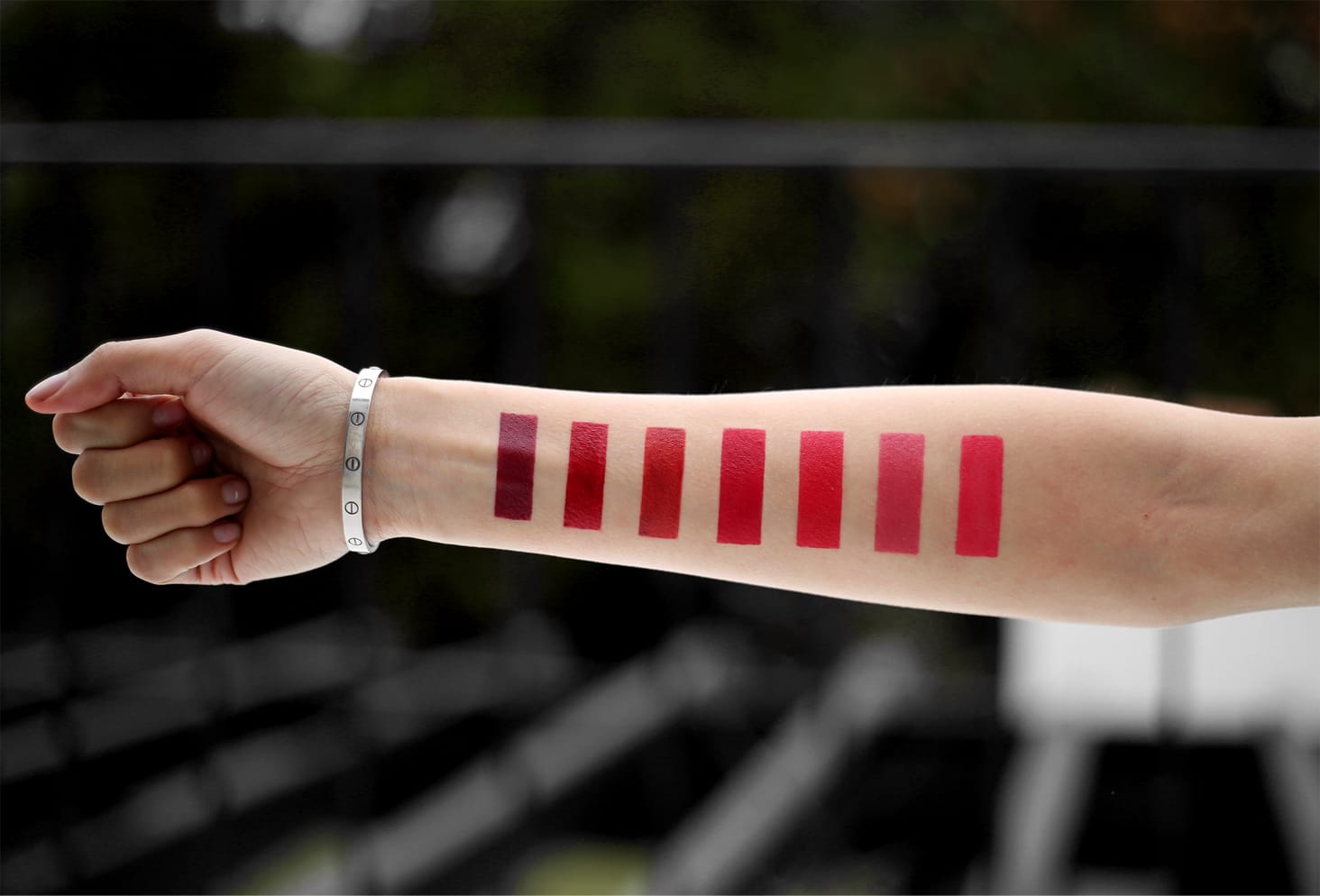 Although Mank actor Gary Oldman is known for performances heavy on dramatic makeup, for Fincher’s film, the Academy Award-winner went au naturel. “David did not want any tricks,” says Oldman. “He said to me, ‘I want you to be as naked as you have ever been.’” Nevertheless, Williams and her team did have to apply some subtle makeup to Oldman and the rest of the cast: “Everyone had to be tan,” recalls Williams, whose Fincher credits include both Gone Girl and Mindhunter. “Their skin tone had to be a shade darker than the whites of their eyes because of the filters they were going to use. Otherwise, everyone would wash out. We tested hundreds of foundations. The contrast made it challenging because what you thought was working in the makeup trailer wouldn’t necessarily work on set.” 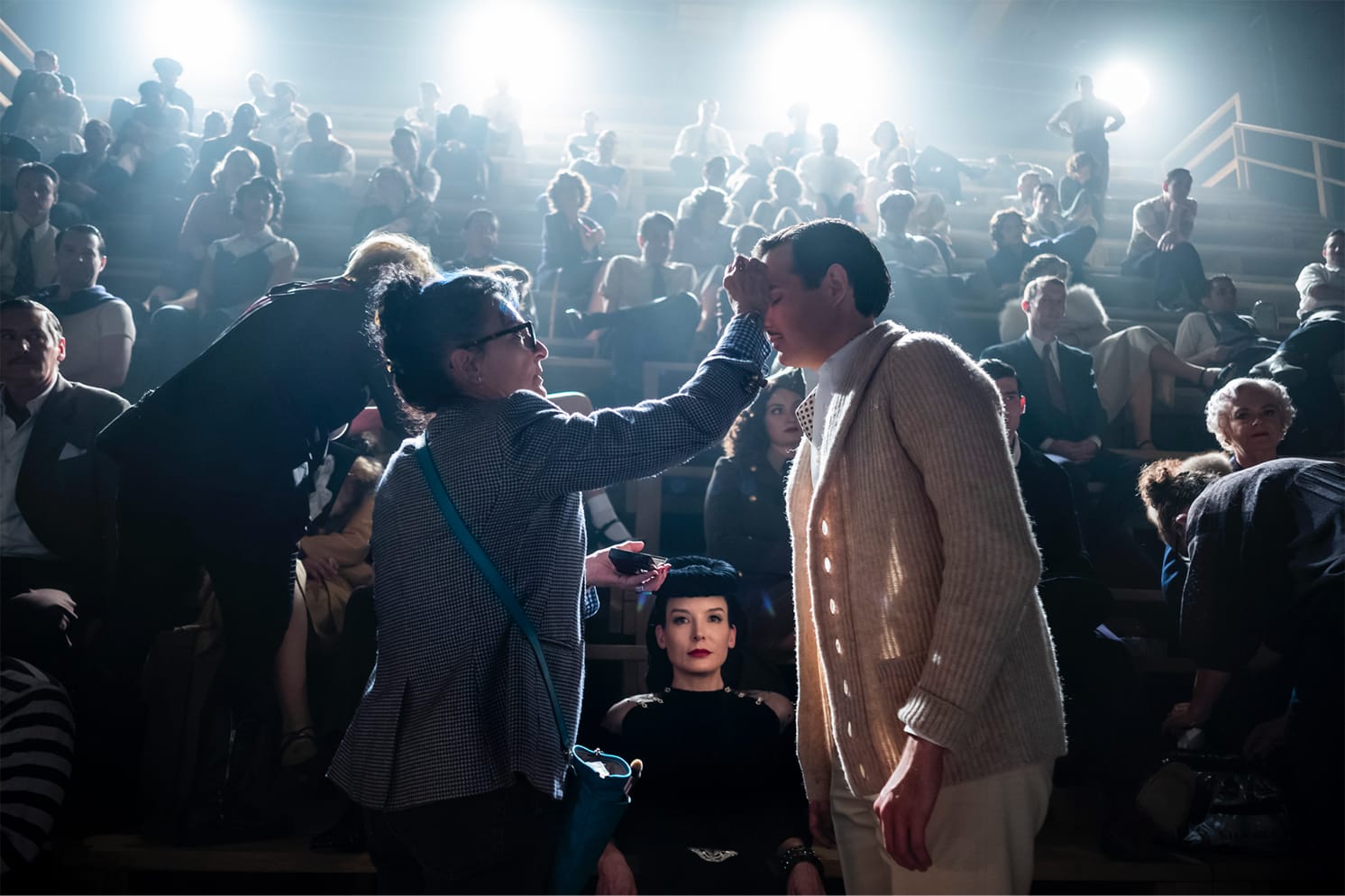 Louis B. Mayer (Arliss Howard) speaks to his employees

Louis B. Mayer (Arliss Howard) speaks to his employees

In contrast to Oldman’s stripped-down aesthetic, the women around Mank — particularly Amanda Seyfried’s glamorous starlet Marion Davies and Lily Collins’s smart secretary Rita Alexander — needed something more elaborate, especially when it came to their lip colour. “We narrowed 300 lipsticks down to an eight-colour palette of different shades, ranging from peach to deep red and just the right amount of sheen,” says Williams. “On all of David’s other projects, he hates the colour red. He doesn’t like to see the red on set, on lipstick, on clothing, nothing. But we had lots of red in Mank. We had to find a red that he was O.K. to see in person to then show him in black and white. It was interesting to retrain your eye because you’re not seeing onscreen what you’re looking at in person.” 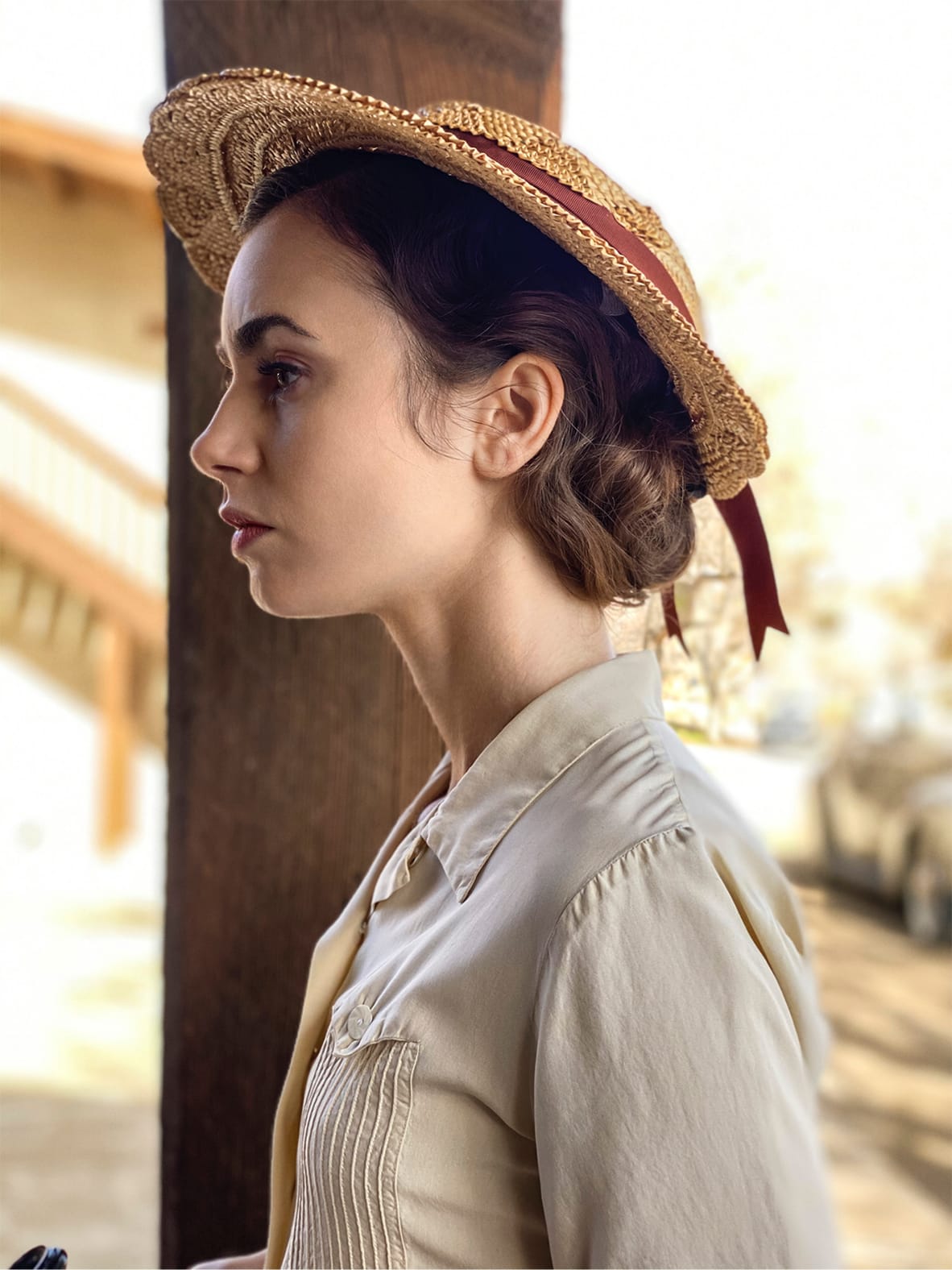 Davies’s gorgeous locks also presented a challenge in terms of colour. “In photos of Marion Davies, you see that she’s a platinum blonde,” says Spiteri. “If we put that shade on Amanda in black and white, it would have disappeared or looked like it was floating off her head. We had to put a bit of darkness in at the roots, so it had some depth when the light hit it — but not so much that it looked like a solid mass. We tested nearly every hair-colour shade in the spectrum for depth and transparency, which was invaluable to our hair-colour choices and the close to 100 wigs that we had to prep for the film.” 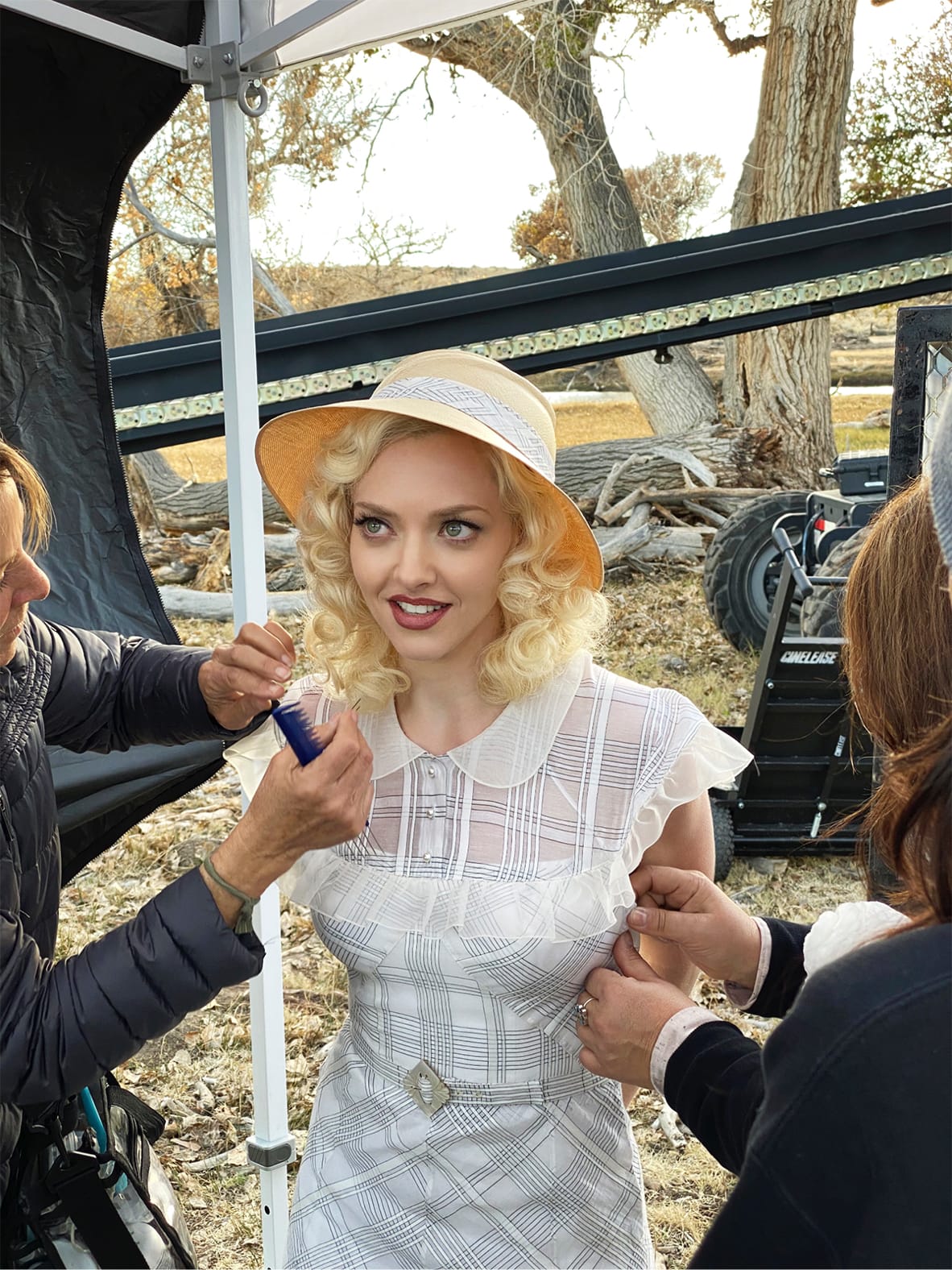 Mank’s increasingly mangled mane required equal attention to age properly. “We started in the early 1900s, then went into the 20s briefly, and then into the 30s, and we end in ’42. That was a huge span of hairstyles for us,” recalls Spiteri. “We did a couple of things to change him from the 30s to 40s, especially with his alcoholism and stress. We darkened his hair a bit, which was interesting to do in black and white. That’s where we get to be challenged as artists. The work matters, ’cause someone may not notice if it’s right — but you’ll notice if it’s wrong.” 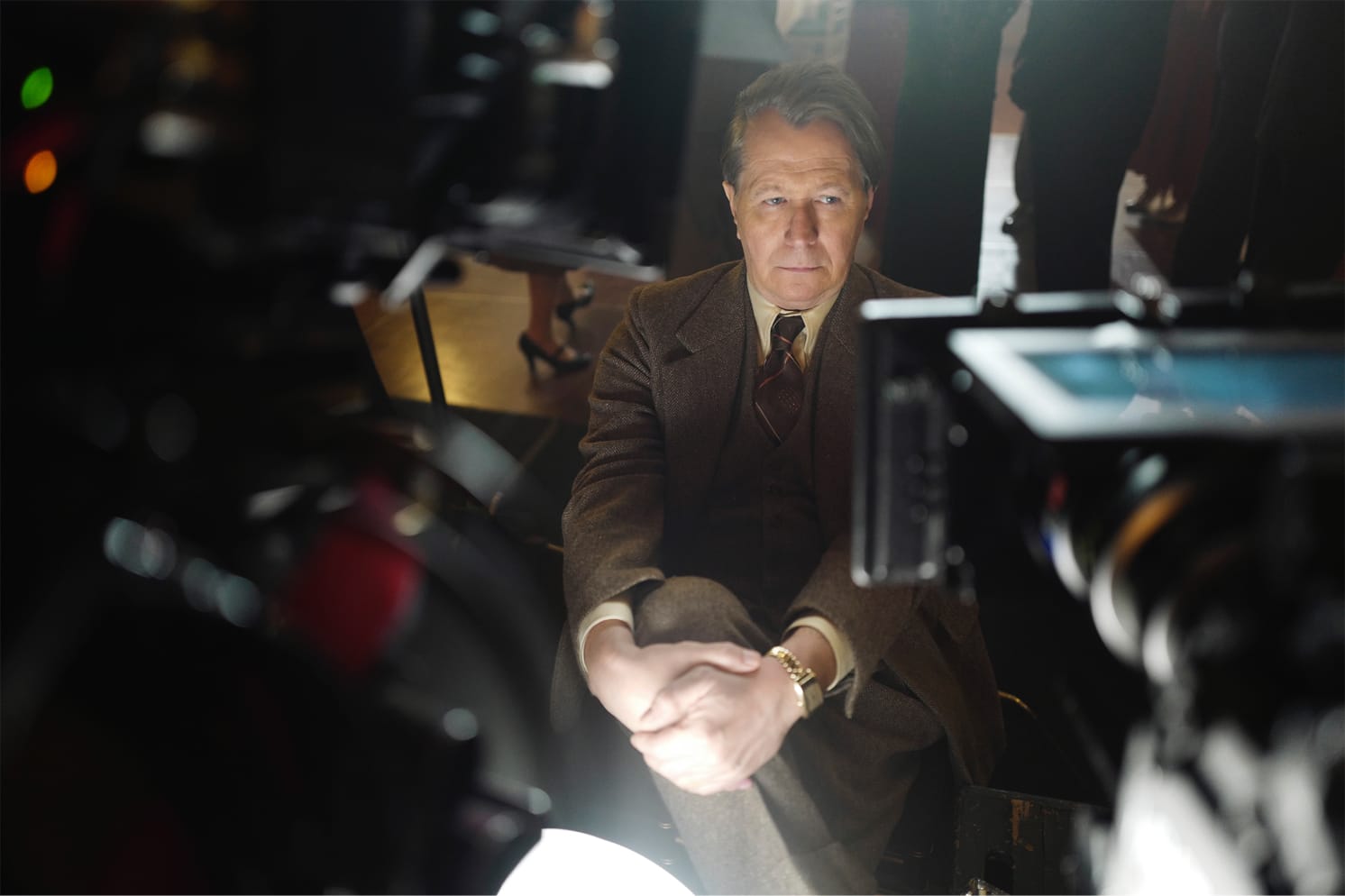