This article featured in CW009, (May 2022) edition of Cinematography World

Rural Ireland, 1981. Nine-year-old Cáit is lying motionlessly in a field, listening to the sounds of nature, cloaked by the tall grass from the harsh reality of her dysfunctional family. When she has to return to her house, we realise why she craves solitude. Unloved by her parents, neglected by her siblings, ridiculed by her school peers, the vulnerable girl is desperately trying to find her way into the world. It all changes when Cáit is sent for the summer to her mother’s wealthier cousins Eibhlín and Seán. There, properly taken care of, and under the camera’s watchful eye, she begins to flourish and reveal her inner beauty. 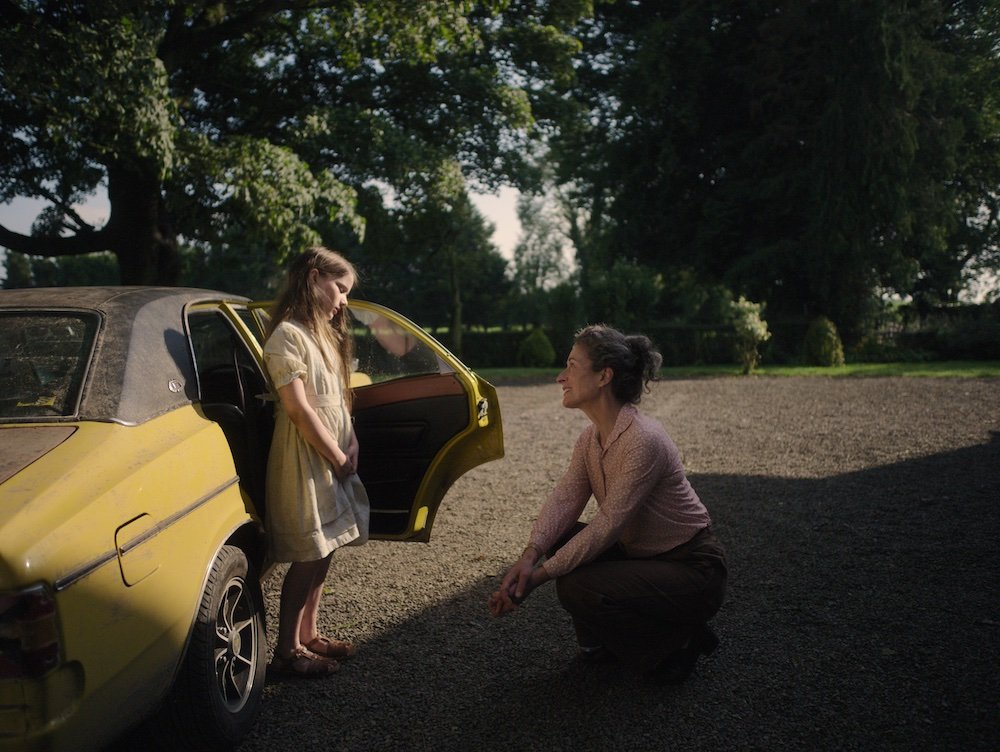 Developed under the Cine4 scheme dedicated to promoting the Irish language, this low-budget adaptation of Claire Keegan’s short story, Foster, is as independent as it gets these days. And it benefited from the cinematic finesse of a native Irish cinematographer Kate McCullough whose work is celebrated around the world, including EnergaCAMERIMAGE Festival nods in feature debuts, documentary and TV series’ competitions.

“I had read Foster years ago. It’s a simple tale but with much depth to it,” says McCullough. “I liked its economy of language and astute observations of people. It was absolutely my cup of tea. When Colm emailed me, I couldn’t say no.” 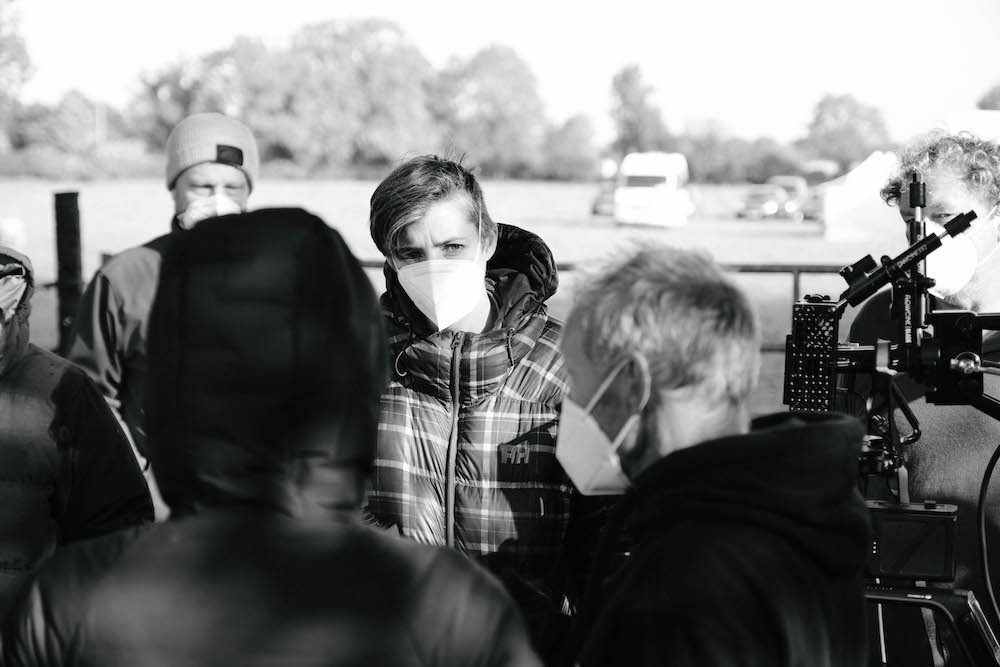 McCullough had not met Bairéad before, and was nervous about doing justice to the story she cherished, but the director won her over with his script for An Cailín Ciúin. The first time they talked was in-person, but then they were soon forced by the pandemic to do the prep via Zoom.

“Fortunately, after the first lockdown we were able to resume meetings, having lunch or whatever, and the summer was beautiful that year which allowed us to work outside. It was a new way of working, maybe even more efficient than before. When we started filming, in September 2020, we were one of the first features to get going under Covid regulations in Ireland.” 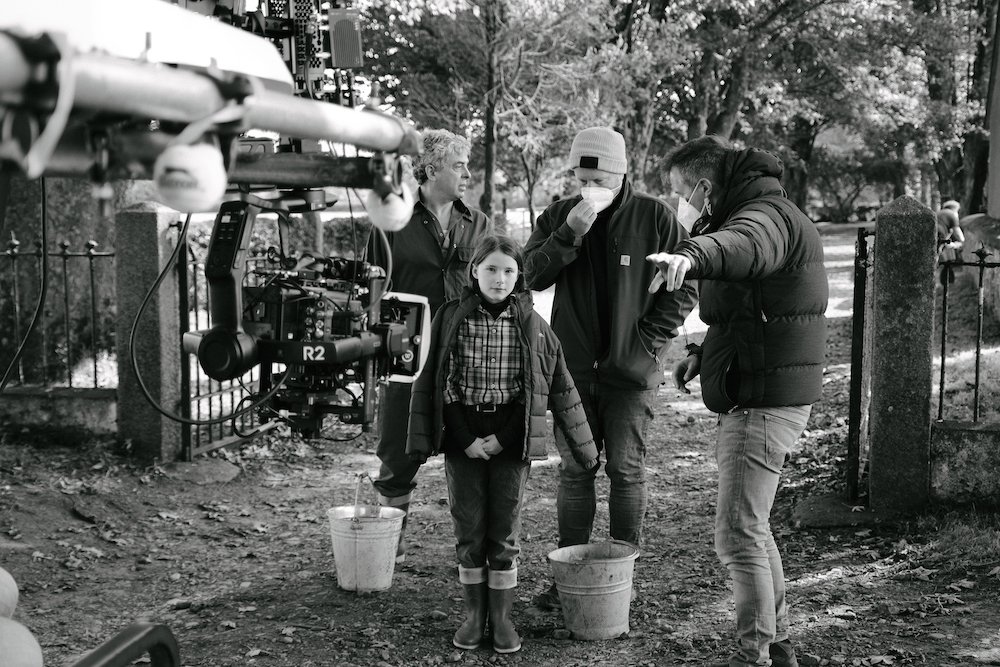 One of the first decisions they made was to shoot the film in 1.37:1 aspect ratio.

“In a sense, the story of Cáit and how she discovers complexities of love and loss is a portrait piece. It seemed to us that the narrow, 1.37:1 ratio would suit the character’s growth. There’s power in not knowing what’s beyond the edge of the frame. It’s somehow suggestive of Cáit’s naivety, a world lying outside the frame yet to be explored or even understood,” explains McCullough.

“It seemed to us that the narrow, 1.37:1 ratio would suit the character’s growth”

“I hadn’t shot that narrow before and wondered whether I was going to feel limited, but it was actually the other way around – I felt invigorated as I had to commit to the frame more than usual. I also talked with Colm about opening-up the frame as Cáit blooms, sort of like in Xavier Dolan’s Mommy, but in this case it felt gimmicky.” 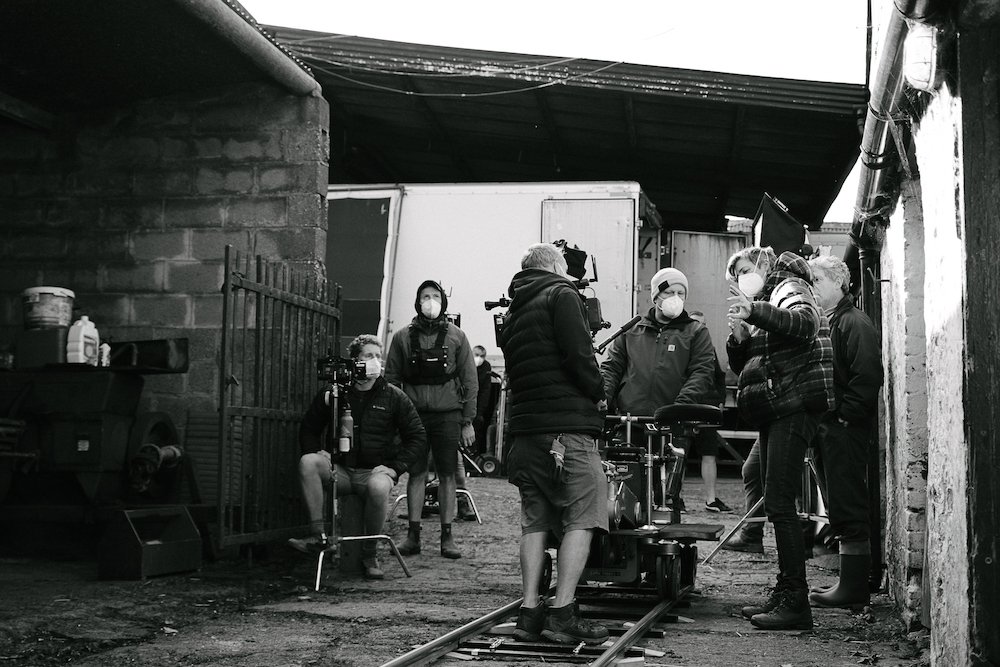 Another crucial decision was to limit the camera’s movement so as to focus the audience on Cáit‘s evolution from a bed-wetting, excruciatingly timid child, to a curious young girl capable of love and being loved.

“We were going for an observational approach and agreed to move the camera only if it felt really necessary,” says McCullough. “We’d rather focus on detailing her life on the new farm, allowing head room to emphasise that she still has to grow. When the movement appears, it stems from the performances, and puts an emphasis on what happens in the still moments surrounding it. Any motion of the camera is rooted in the essence of a given scene, in its energy.” 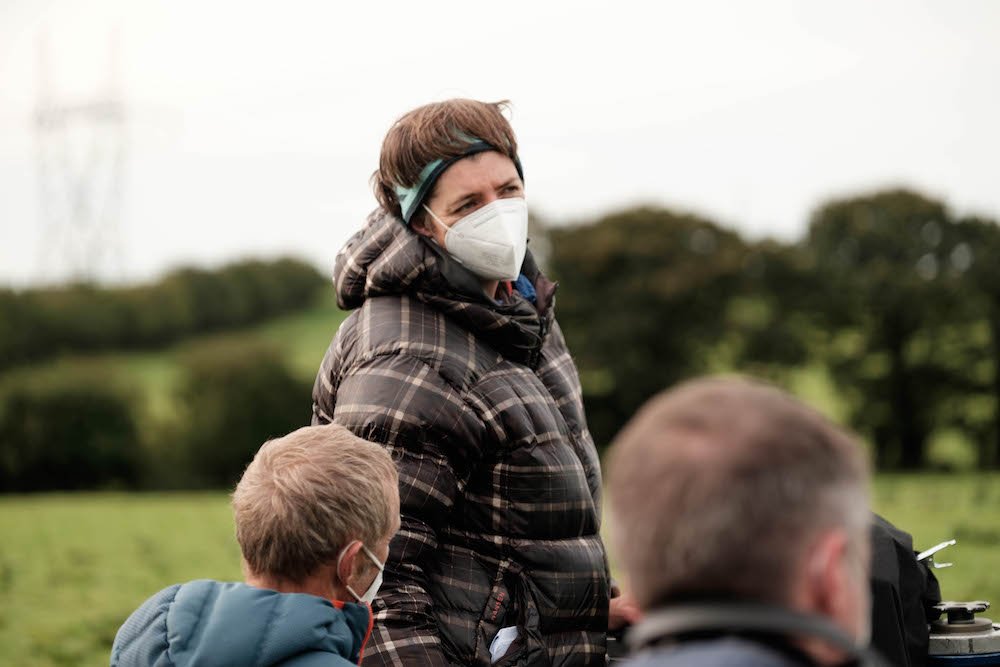 With fixed, but carefully-composed 1,37:1 shots, ordinary activities, such as preparing a warm bath or catching raindrops, evolve into visual poetry that complement the story, giving An Cailín Ciúin a sort of sensory dimension.

“The character is subtle in a powerful way, so it was about allowing her to kind of breathe on screen, or showing what limits her from being free,” says McCullough. “With this ratio you end up with a more pronounced central focal point, so it was easier to frame objects and details. You feel more confined in Cáit father’s car when he drives her to the farm. The silence of adults around a table feels more awkward because there’s less space to escape to.” 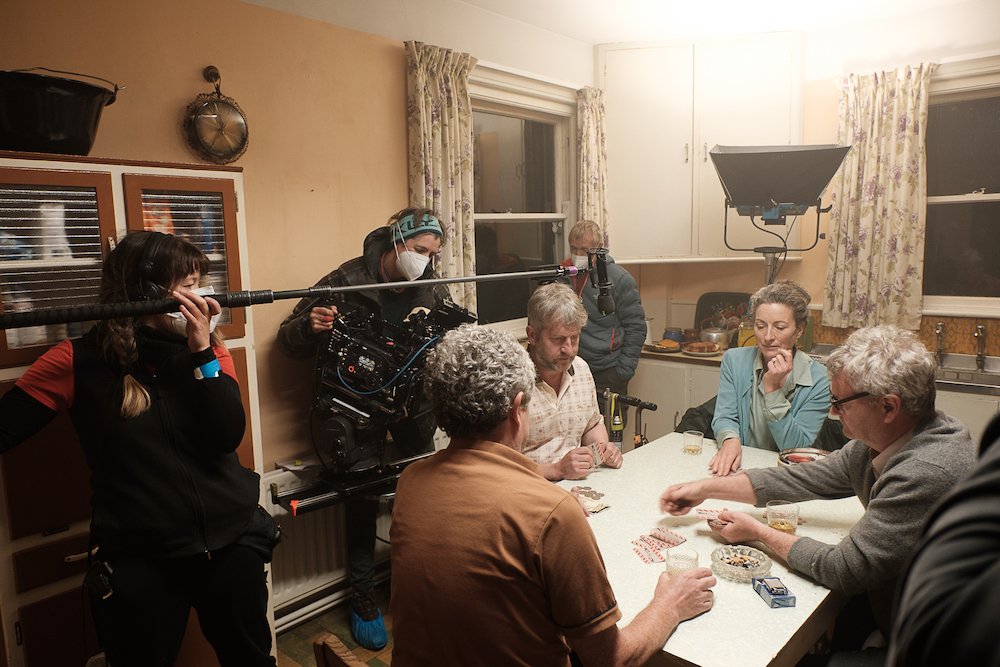 After establishing the cinematographic style with Bairéad, McCullough had to choose a combo of camera and lenses that felt right for the project. Despite working with ARRI cameras for most of her career, she decided on Sony Venice.

“I’d shot a documentary at night during the lockdown with the Sony Venice and I was blown away by the power of its sensor. Here, we had a small budget and a number of scenes that needed working with low light, including a night scene at the beach where Cáit has an honest conversation with Seán by the pale moonlight. I was certain Sony Venice was the right way to go. I actually didn’t test any other camera.”

“I was certain Sony Venice was the right way to go. I actually didn’t test any other camera.”

It was a bit more problematic with lenses, however. “I tested Zeiss CP.3 Primes and ARRI Master Primes and could only afford the former if we wanted to shoot Full Frame. I wanted to see what the difference was between S35 and the full frame sensor but it was immediately apparent to me that Full Frame was the way to go for this film. And so we went with the CP.3s. And I have to say, I didn’t regret it for a moment,” muses McCullough.

“When I put Tiffen’s Black Pro-Mist filter in, it took the edge off them and they gave a really nice look, with a beautiful, warm flair. The 35mm was our workhorse lens and I matched CP.3s with the Angénieux 22-60mm and 45-120mm zooms for a couple of in-camera zooms, and that was it.” 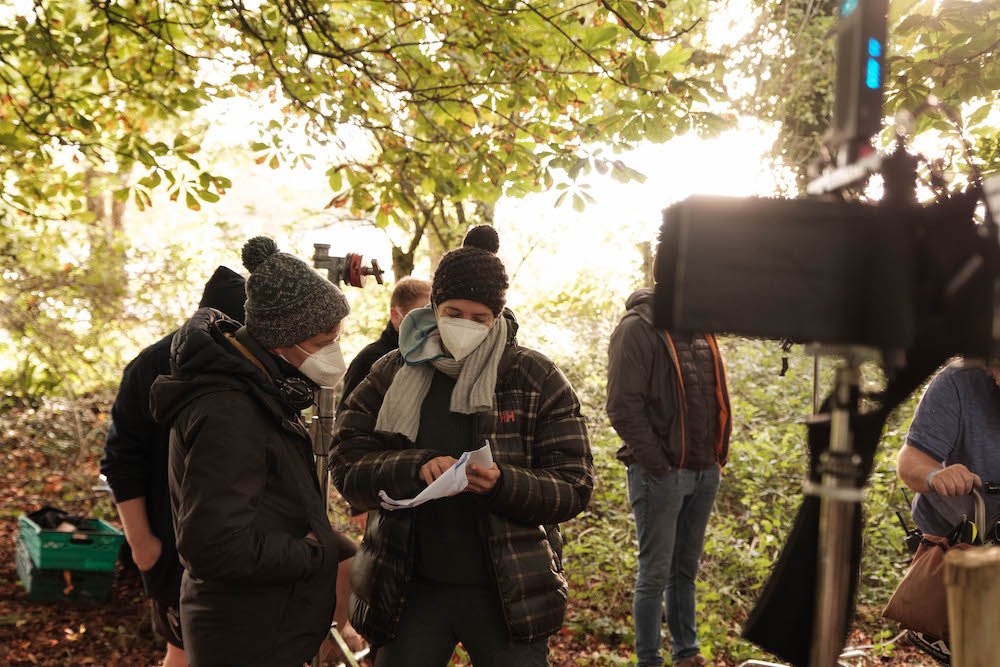 McCullough says that because of her documentary background she prefers simplicity on sets and was grateful for shooting the entirety of An Cailín Ciúin on location.

“It would’ve taken a lot of resources and money to make those houses believable on stage, and besides, many farmers still live on such farms just as they lived in 1980s. We worked in Meath County, an hour away from Dublin, and shot our two houses on three separate farms as our main location didn’t have the right livestock on it,” reminisces McCullough. “It was sort of a time capsule for me. I grew up on a farm in the countryside, so a lot of it I recognised from my own experience.” 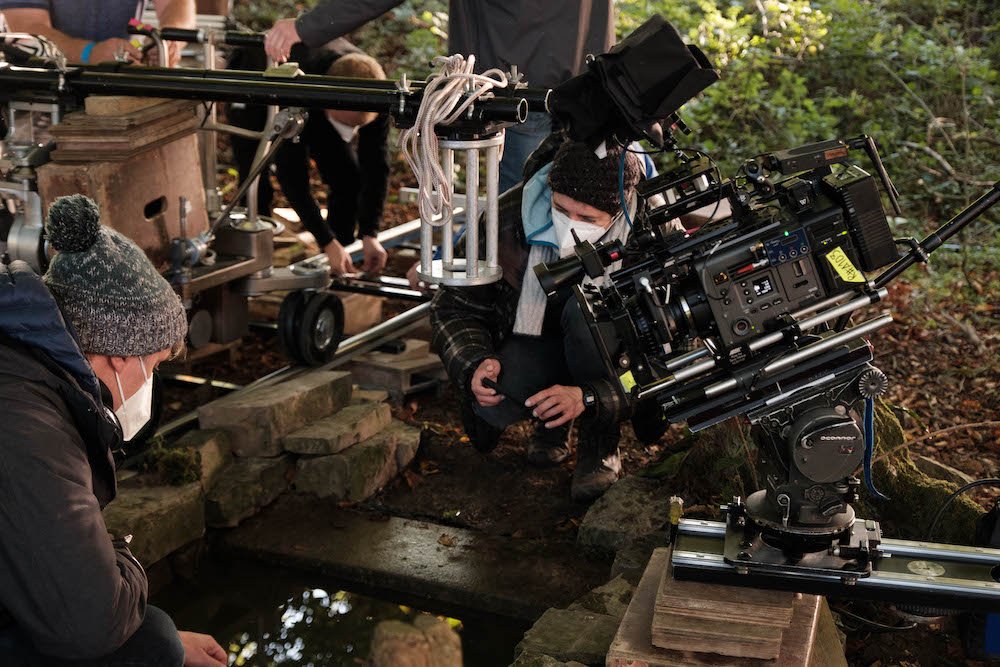 Working in scenic locations for 25 days in September and October 2020, she tried to minimise her lighting equipment.

“For day exteriors, I only used bounce and negative fill, maybe a lamp once or twice to match a shot we had sun for. In Ireland the weather changes every five minutes, we actually get four seasons in one day,” laughs McCullough. “I love shooting in early autumn, as you get access to dusk and dawn within the regular shooting day and the light is a bit softer and kind to the human skin.”

The only exception was the mentioned beach scene, although still she did not use many light sources. As she explains, “We rigged two small 6K spring ball lamps to use with Sony Venice. I wanted to make the characters as visible as possible without losing the natural beauty of the darkness that envelops them.” 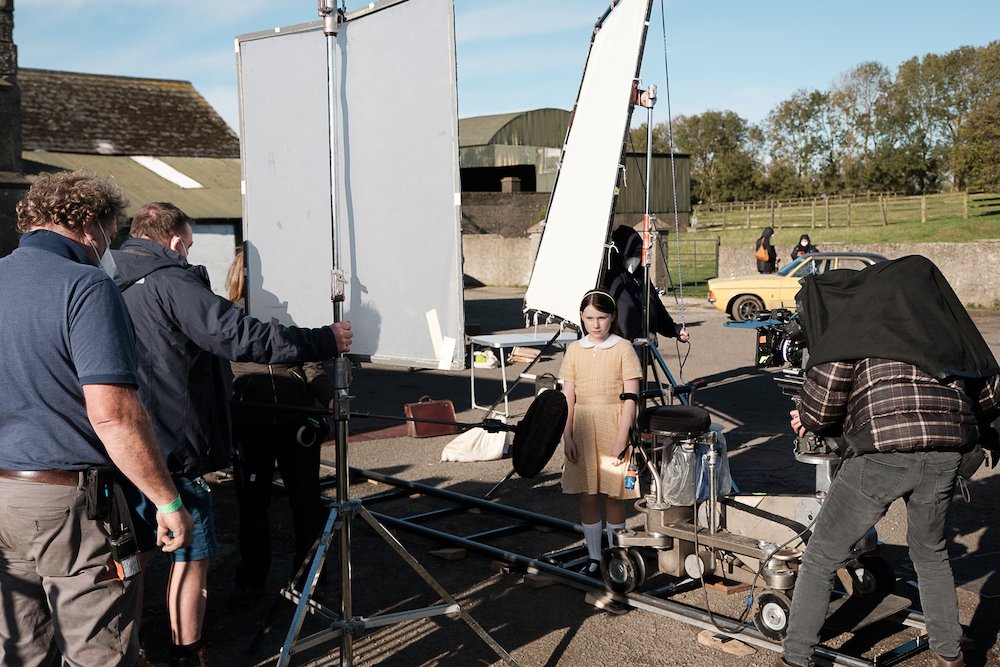 “The house Cáit comes from has deep walls, so naturally light doesn’t get into the rooms. I only used two 4K Pars, as I could not get more than one Par in one window. Though it was enough to adjust it to our needs and not lose the location’s character,” says McCullough.

“The second farm is more airy, lots of windows through which you can see the landscape and trees catching the wind. It gives you this transient feel. I had one 12K Fresnel, two 4Ks and two 1.8Ks, and a couple of Lite Panels. The rest was trying to control the available light with mirrors, etc. As difficult as it always is with the unpredictable Irish weather.”

“As a rule, I only do as much as I need to do to bring the image to life, both equipment-wise and crew-wise. I like a quiet set based on trust,” admits the cinematographer who worked with two LUTs – one for day and one for night – developed with colourist Garry Curran from Outer Limits. 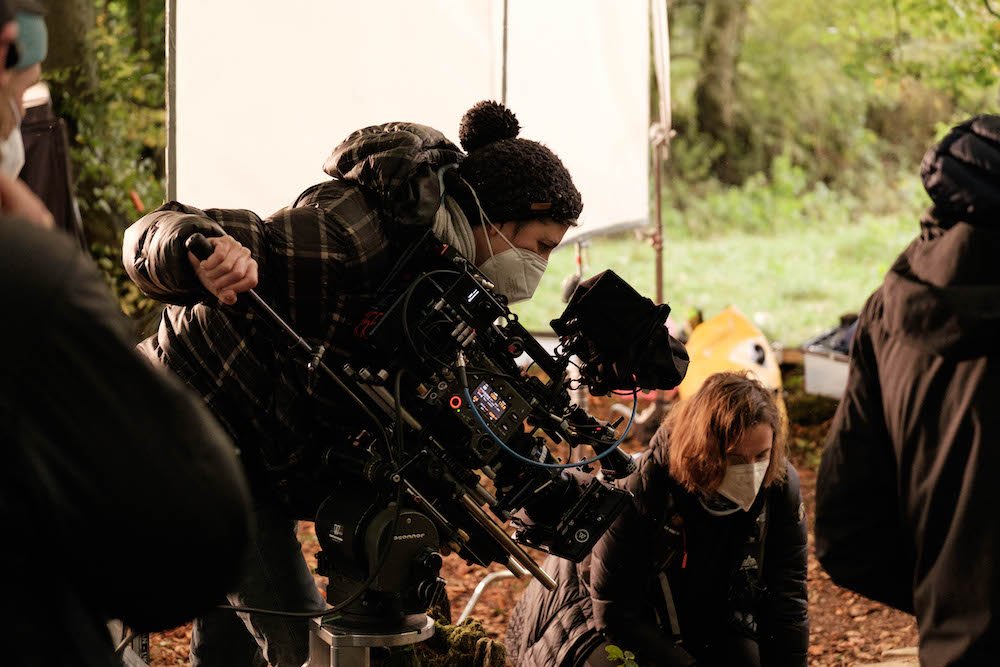 “I didn’t want to betray the story or the characters. This film is about the unsaid, the emotionally unspeakable. Little is spoken by these characters, so when they do speak it’s when they no longer can hold a thought or emotion inside. The camera has to be always ready to register these subtleties on screen. I think that’s the beauty of this film.”

An Cailín Ciúin is just that, one of those exceptional films during which you can laugh, and cry, and be angry, and get hopeful, and experience a range of emotions without ever feeling overwhelmed by what you watch. A true independent gem.