In Prime Time, Łuka who is known internationally for lensing the live-action/CGI hybrid animation World War II series The Liberator, continued the grand traditions of Polish cinematography. Here is a poignant drama about twenty-something Sebastian (Corpus Christi actor Bartosz Bielenia) who enters the Polish Television building armed with a handgun on New Year’s Eve 1999 and interrupts live broadcast to deliver a message to all Poles. When he is rapidly cut off, the armed man takes hostages and thus creates a complex situation that has to be handled by police negotiators and a counter-terrorist squad. All of this is introduced during the first 15 minutes, and then the film slowly builds up to a surprising climax.

Because the bulk of the film featuring Sebastian and the hostages was confined to the TV studio floor and different transmissions room, the key challenge was to develop a visual language that would enhance the narrative flow.

“These are two distinct areas governed by different mindsets in the film,” says Łuka. ”Sebastian is a young rebel who acts spontaneously, but he faces abstract institutions – such as television and the police – represented by people who have to do everything by the book. You know, it’s essentially a variation of ‘the individual vs the system’ struggle.

“We differentiated between them in various ways, but the camera movement was perhaps the most crucial. The floor scenes were shot with a handheld camera following and reacting to the actors who were freed from blocking. The rest we shot on Steadicam and dollies, with some typical TV-style zoom-ins included, in a sort of observational manner.” 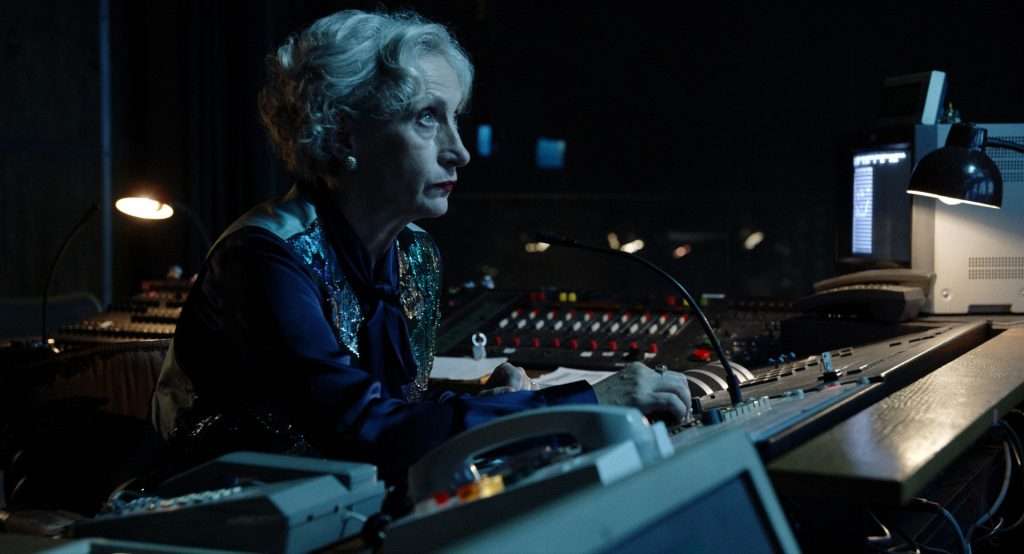 The zoom-ins were just one of ways in which the filmmakers smartly recreated the analogue reality of broadcast television at the turn of the Millennium – archival footage and scenes shot on Betacam were thrown into the mix too. The majority of the film, though, was shot on ARRI Alexa Mini equipped with Panavision Primo Classic lenses and Primo Zooms 19-90mm.

“I wanted the film’s lighting schemes to have this raw, emotional quality to them” Łuka explains. “To emphasise ‘the individual vs the system’ theme through having darker blacks, a high contrast ratio, a ‘dirty’ colour palette, and a mix of light sources with different colour temperatures. There is some halation in the Primo Classics that went great with my overall visual approach and reacted well with skin tones. They were a great match with Alexa Mini and gave us an lovely organic look.”

The film’s overall feel was vital to accentuate Prime Time’s most daring message: the need to rebel against the complacency of those who spin our reality to suit theirs. 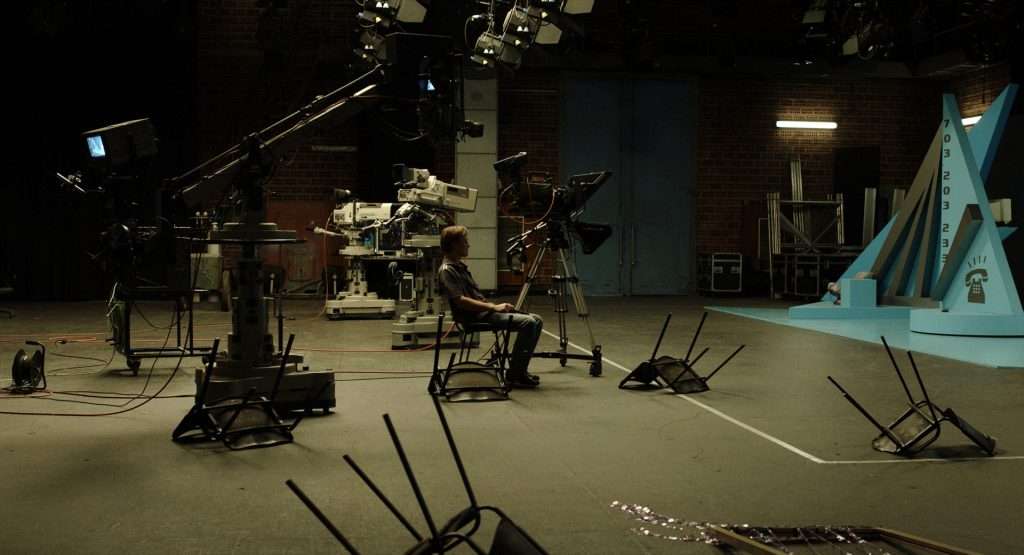 “Kuba, the director, sent me various films to watch, both as direct visual references and also to help me to get into his vision for the film. Such as: Dog Day Afternoon (1975, dir. Sidney Lumet, DP Victor J. Kemper ASC) for the rebel vs. the system theme; The Assassination Of Richard Nixon (2004, dir. Niels Mueller, DP Emmanuel Lubezki AMC ASC) for the way a handheld camera can depict a man’s loneliness; and No (2012, dir. Pablo Larraín, DP Sergio Armstrong) for its use of old technologies, like the Ikegami HL-79EAL 3-tube camera, for the film’s betterment,” says Łuka. “We didn’t want to go full vintage or simulate TV’s 4:3 PAL ratio, but rather to do something in-between that would emulate the past and at the same time be elegant in a modern way.” 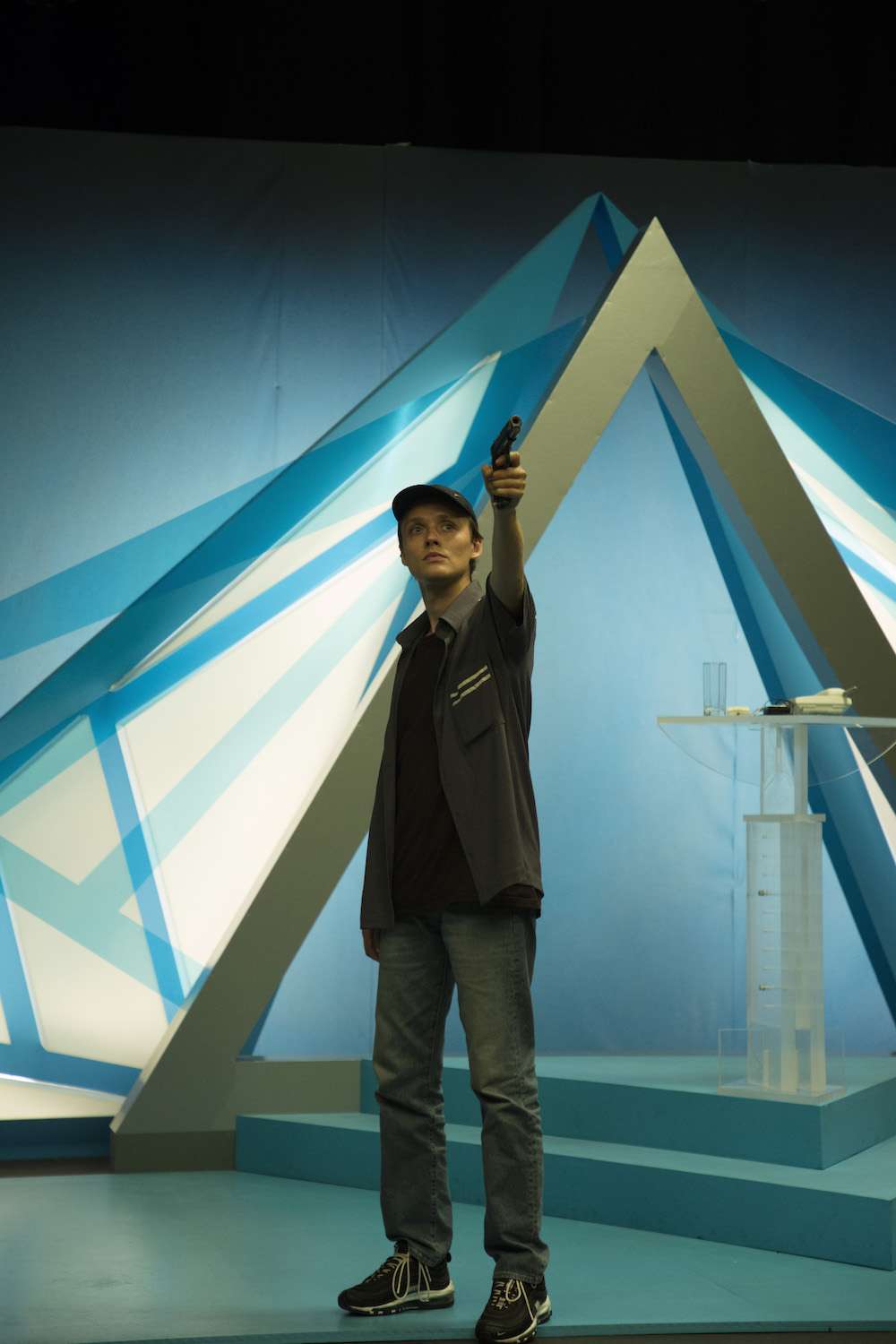 In other words, what Sebastian does is wrong, but his intentions might be relevant, and the journey he takes the audiences on is thrilling and thought-provoking.

“This was a risky mix of genres and styles, especially with all the visual formats and conventions, but Netflix, which was one of co-producers, gave us the greenlight to shoot on Alexa Mini even though it’s not technically the 4K requirement for their original content,” reminisces the DP. 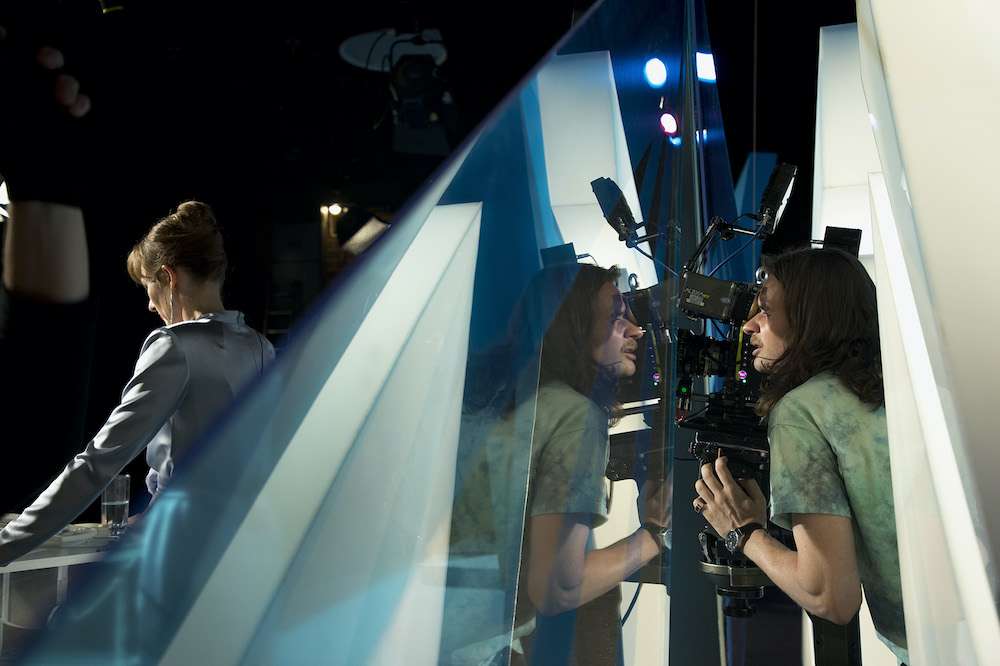 “The idea was to offer a vivid, visceral experience. We based the whole DI, done with colourist Wiktor Sasim, on balancing some of the colour and brightness levels on the LUT we worked with during the pre-production. We didn’t retouch the old materials, we loved their distinctive unbalanced quality and the feeling of authenticity.”

Łuka started prepping the film in December 2019, although 30-day shoot did not take place until July and August 2020, between the first and the second wave of Covid-19, which meant the cinematographer was well-prepared. He considered his main task to be giving the actors, especially Bielenia, the space to explore the opportunities provided by the script. The interesting thing is that not a frame was shot in a traditional film studio set. 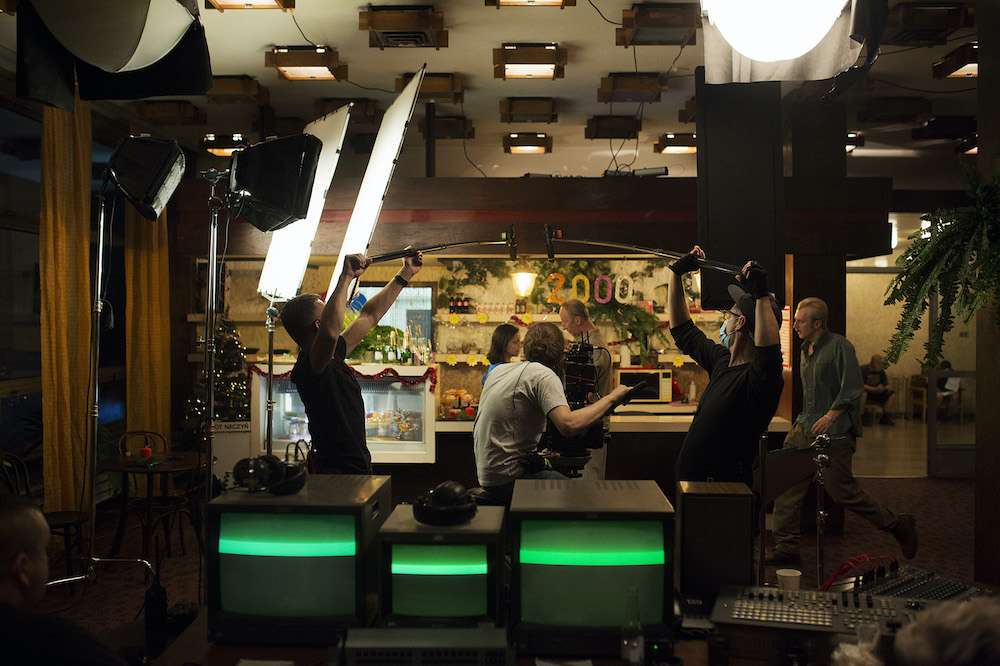 “Everything was done on location, on a real television floor and in the control room of Polish Television’s Kraków branch,” Łuka reveals. “In the room, we put camera-friendly wall panels and erected an additional window to counter the lack of removable walls and enhance its visual spatiality, but the rest stayed as it was, though we obviously lit it with our equipment.”

“In the control room, we had LED tubes for the blueish screen light, and compact lights such as Rosco SL1 and Mini Mix,” reminisces Łuka. “For some scenes on the floor, we used the existing broadcast cameras and lamps pre-rigged under the ceiling and enhanced them using our lights. The idea was to be as authentic, but as cinematic, as possible. I also used a mix of gels to get this dirty yellow-greenish colour cast. The result is a feeling of uneasiness and the growing desire to get out of there.” 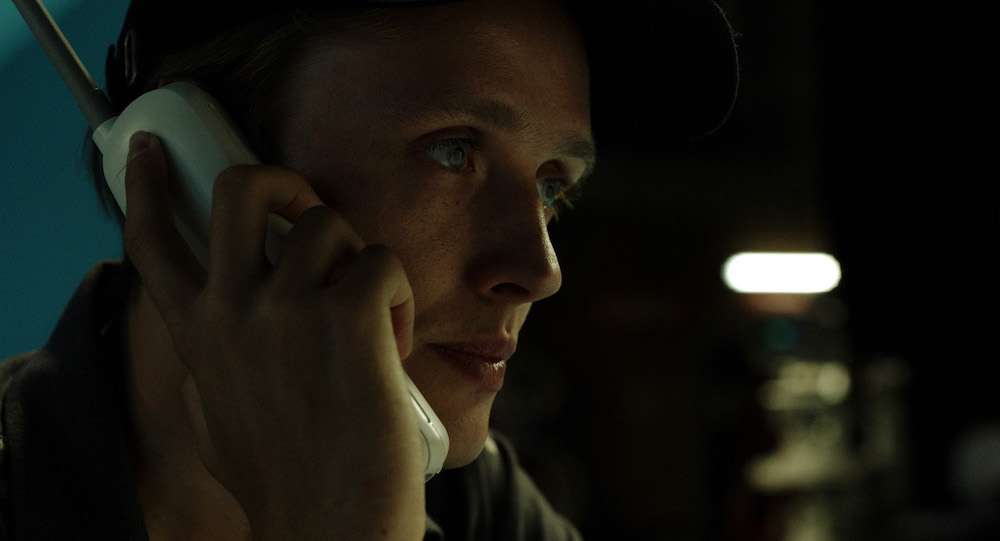 Prime Time is therefore an amalgam of looks that perfectly complement the story about the clash of different worlds and worldviews.

“I treated Sebastian as a character who could be thought-provoking only when he is authentic. Not a rebel-without-a-cause type, but a human being who decided to act of out the emotional confusion in his life,” offers Łuka. 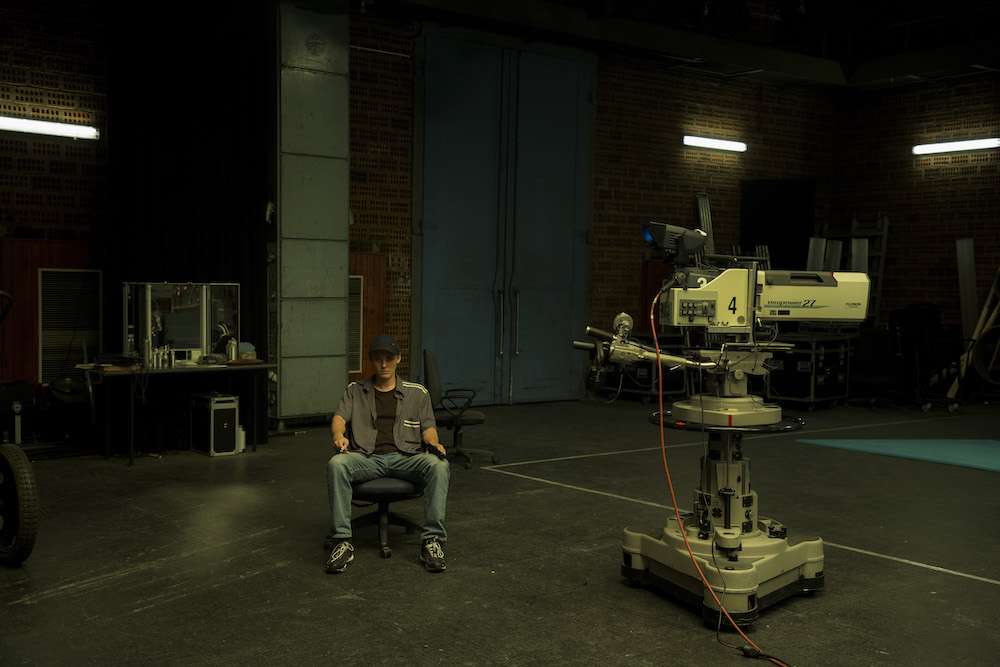 “I don’t know what the future holds, but I am certain I want to participate in projects that require some effort out of me, be it a hybrid animated war drama shot on greenscreen or a romantic comedy. I have never shot one of those, but if the script is right, why not? I believe I have much to give to directors of various genres.”