Unfolding in real time, The Desperate Hour is a riveting and pulse pounding thriller from award winning director Phillip Noyce. Recently widowed mother Amy Carr (Watts) is doing her best to restore normalcy to the lives of her young daughter and teenage son in their small town. As she’s on a jog in the woods, she finds her town thrown into chaos as a shooting takes place at her son’s school. Miles away, on foot in the dense forest, Amy desperately races against time to save her son. Production happened in July 2020, during the heart of the COVID outbreak in a remote area of Northern Ontario.

Beyond the challenges of shooting during the pandemic, the story presented its own challenges for photography. Though the majority of the film involves only one actor, Watts, the premise that her character is constantly running through rugged terrain made the approach to cinematography critical. Brawley chose to shoot with the URSA Mini Pro 12K both for the small form factor and the high resolution. “The film had a lot of challenges because you’ve got a character who’s jogging, running or walking fast for most of the film,” said Brawley. “She starts off on a road and then she’s on a dirt road and then she’s on two tracks and then she’s on some little goat trails in the woods and then she’s literally in the middle of the forest with no tracks.”

The key to production for Brawley was having a small cinema camera that could be rigged in multiple ways, ensuring they could achieve a wide range of coverage despite the challenges of the shoot. “The film kind of plays as real time, so when you start thinking about how to shoot that it really is challenging. We had to think, what are we going to use to be able to keep up with her when some of the takes are 15 minutes long and she’s going to run a few miles? What are you going to use that can keep up that isn’t going to make sound? It was sort of deceptively complicated and also ambitious.”

Brawley brought aboard four URSA Mini Pro 12K bodies, rigging one on the back of an electric motorcycle using the SRH3 Stabilised Remote Head. “The great thing I loved about that is that was a very small and lightweight package on the motorcycle,” added Brawley. “When we’re trying to literally weave in and out of trees and so on, you want a small head and a light camera package.” 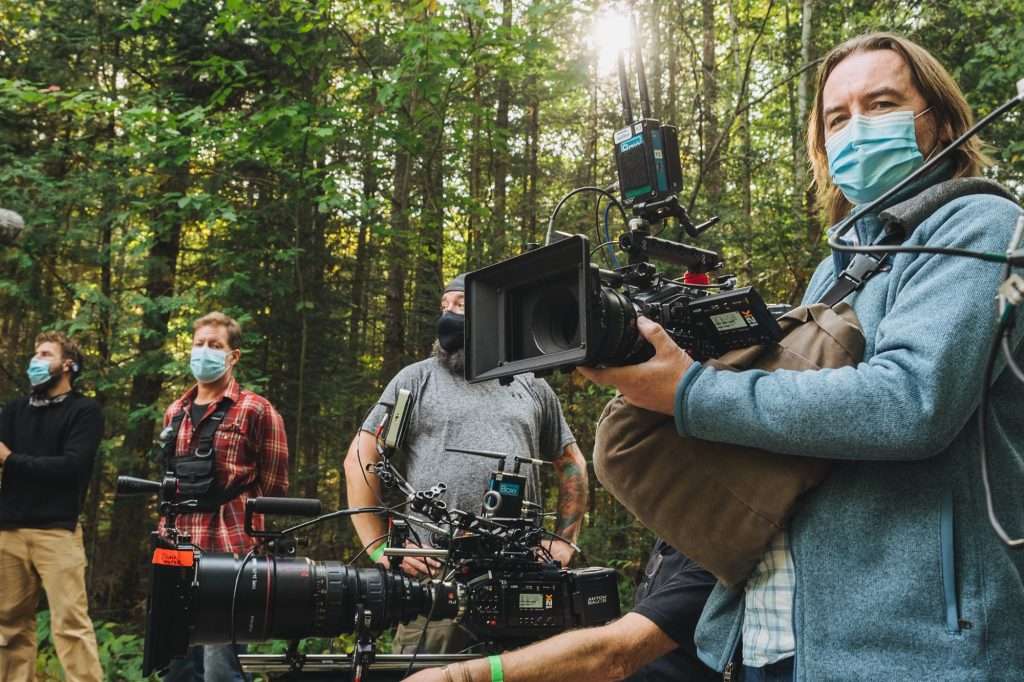 A second camera body was rigged in studio mode, with a third used by a splinter crew shooting B roll or working with Watts’ doubles. The fourth body was saved for a backup. Brawley also used a Pocket Cinema Camera 6K Pro for various added inserts.

The added resolution of 12K was part of the early plan for Brawley and Noyce. “The 12K resolution was a plus because we knew that sometimes we were probably going to have to stabilise a shot, even with a stabilised head. The other cool thing is that the URSA Mini Pro 12K can work in 8K mode without losing any field of view. An advantage there is that the rolling shutter read out time is halved. Roughly, the URSA Mini Pro 12K has a read out of about 15 milliseconds, but in 8K it’s half that, about 7 to 8 milliseconds. For intense action scenes, especially if we’re in profile or panning through trees, the rolling shutter in 8K mode helped to eliminate skewing of the verticals. If we were leading ahead of Naomi from the back of the e-bike, we’d leave it on 12K, but if it was profile, panning, we’d go to 8K,” said Brawley.

While Noyce and Brawley had worked with Blackmagic Design cameras in the past, most recently shooting a pilot using the URSA Mini Pro 4.6K G2 as their A camera, Brawley still shot a test for the film. “I shot some stuff with the URSA Mini Pro 12K and with another cinema camera. We made a DCP and screened it in the local cinema in North Bay, the little village where we worked. I love doing these as blind tests. We had the shots up on the big screen with the producers and the director. Everyone actually liked how the URSA Mini Pro 12K looked, it’s what people responded to the most.” 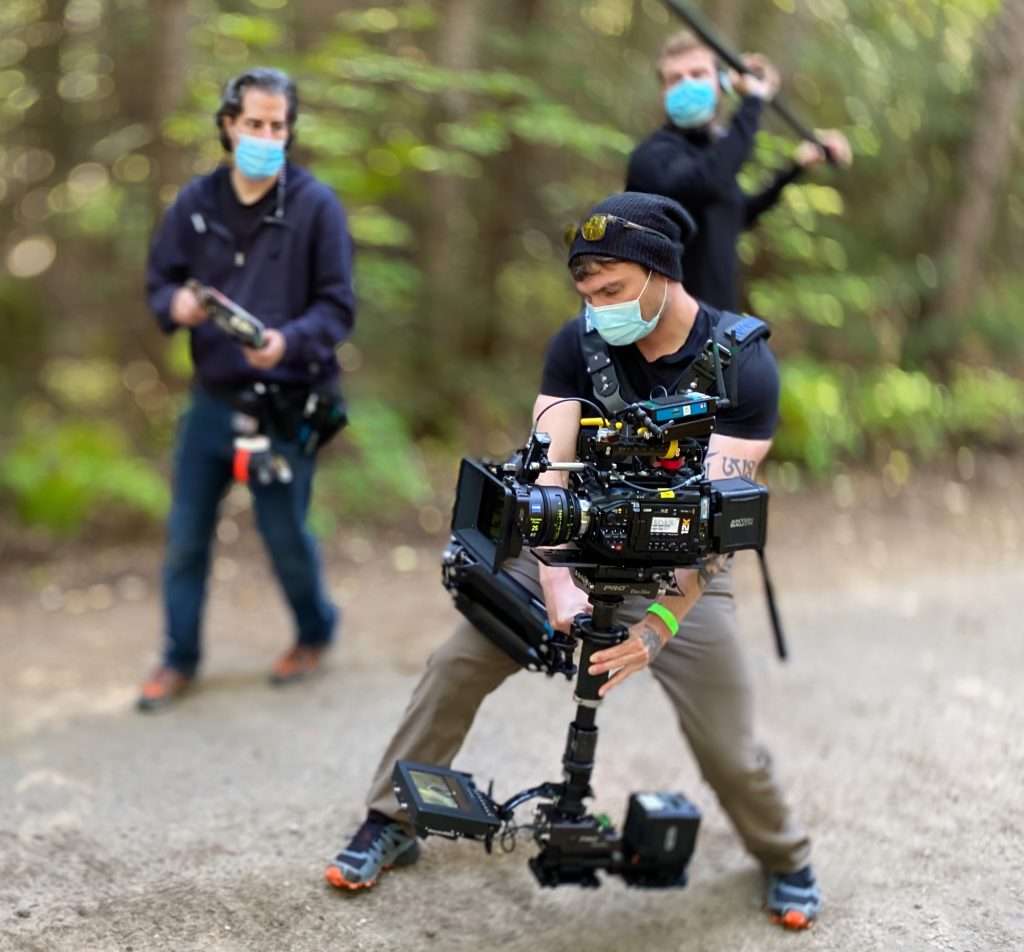 With the 12K resolution of the camera (12,288 x 6,480 pixels) Brawley knew there would be concern from various departments that the higher resolution might cause unforeseen problems. “I had a conversation with Naomi’s hair and makeup people because when they heard the 12K number they were saying, ‘Wait, you’re gonna put this camera one foot from her face?!’ The funny thing, though, is that when you have that kind of resolution actually the opposite happens. It’s almost like the structure of the pixels disappear and it becomes in a way more flattering.”

Brawley chose Zeiss Supreme lenses to match with the 12K resolution and discovered some pleasing results. “When I was first shooting with the URSA Mini Pro 12K cameras and the Supremes, it had this almost large format look, which is how I would describe it, even though it’s a Super 35mm sensor. The frames are beautiful where they fall off. I feel like that lens has a bit of a large format look, so I feel like the Supremes are a very good match for the URSA Mini Pro 12K.”

Beyond the technical aspects, Brawley knew that the URSA Mini Pro 12K combined with Blackmagic RAW would give him the image he needed for the film. “It is unique the way the sensor works. We were shooting in autumn, and we knew the colours in the forest would be a big part of it. Production design chose the locations for the look, but the location was a character as well. With the URSA Mini Pro 12K we had a camera that could give that vibrancy, nuance and subtlety justice, because there are some beautiful autumnal colors in that forest. Especially when you’re grading, it feels like you see a lot more subtlety. When you’re looking at Naomi’s face, you can see the sky colour reflected on her forehead.”

Choosing a compression setting for the shoot was also critical for data management and highlighted some of the differences in Blackmagic RAW to other codecs. “I used the Blackmagic RAW Constant Quality ‘Q’ settings. I recorded most of the film at Q3 because Q3 at 12K is about a terabyte an hour, and Q3 looked fantastic. The Constant Quality settings are interesting because the bitrate floats, with a bracket between low and high, and it isn’t based on motion; it’s based on what’s in focus. So, if something is out of focus, it uses less data, and if it’s in focus, it uses more data. It was interesting to realise and work that out. However, I never really felt like I ran into the wall of the compression itself.” 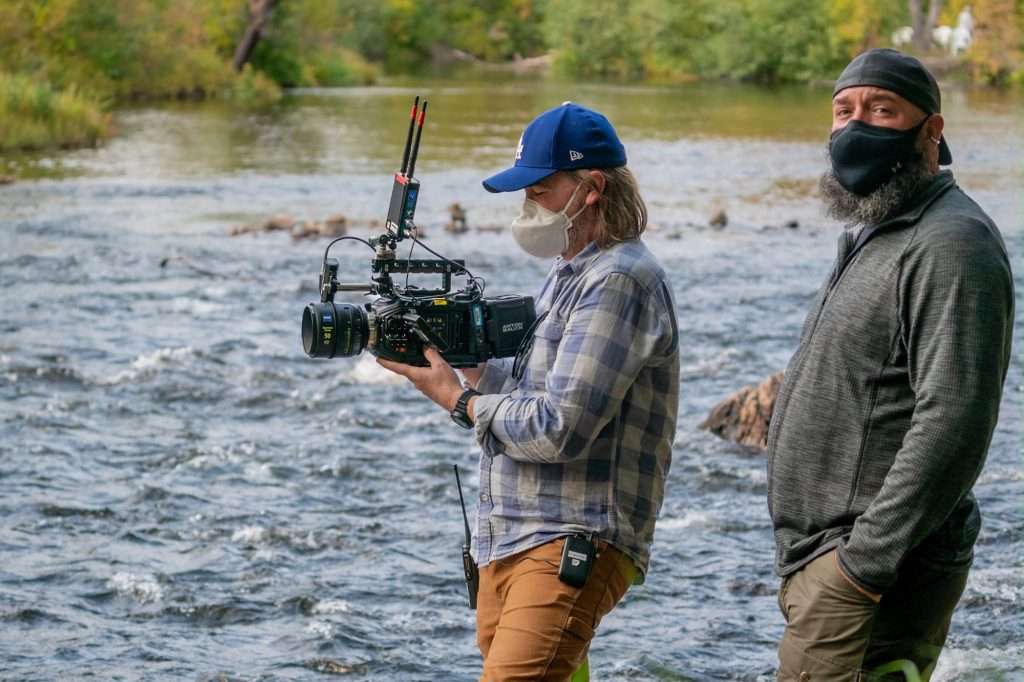 Ultimately, Brawley’s choice to use the URSA Mini Pro 12K was motivated by many reasons, all adding to a better final film. “There were lots of reasons to choose the URSA Mini Pro 12K, but principally we realised we could have four camera bodies on set for the price of one, and the cameras gave us the extra resolution we might need for some stabilising and shot resizing. The URSA Mini Pro 12K is physically smaller than other cinema cameras, especially for long handheld takes, which I preferred as well. And for the stabilising head, it was a lightweight camera which made everything just a little bit easier to work with. So, there are a lot of reasons, as well as the image quality. Phillip was at the premiere at the Toronto International Film Festival, and he said the film looked amazing. In the end, that is the best reason to use any camera.”