The displacement of people is an issue that is perpetually on our TV screens, particularly news reports, but have you ever really imagined what life might be like for refugees? Well, director Ben Sharrock’s highly-acclaimed and thought-provoking film, Limbo, uses a sense of the absurd to bring humour, humanity and a new perspective to their plight.

The £2m film centres on four young asylum seekers from different parts of the world, who are housed together on a remote Scottish island, and taking cultural-awareness classes, whilst they await the processing of their refugee claims. Among them is Omar (Amir El-Masry) a young Syrian musician, caught between his war-torn motherland and an unknown future. He is also burdened by the weight of his grandfather’s oud, which he cannot play due to a wrist injury, and lugs endlessly around the island in its protective case, as it were a coffin for his soul. 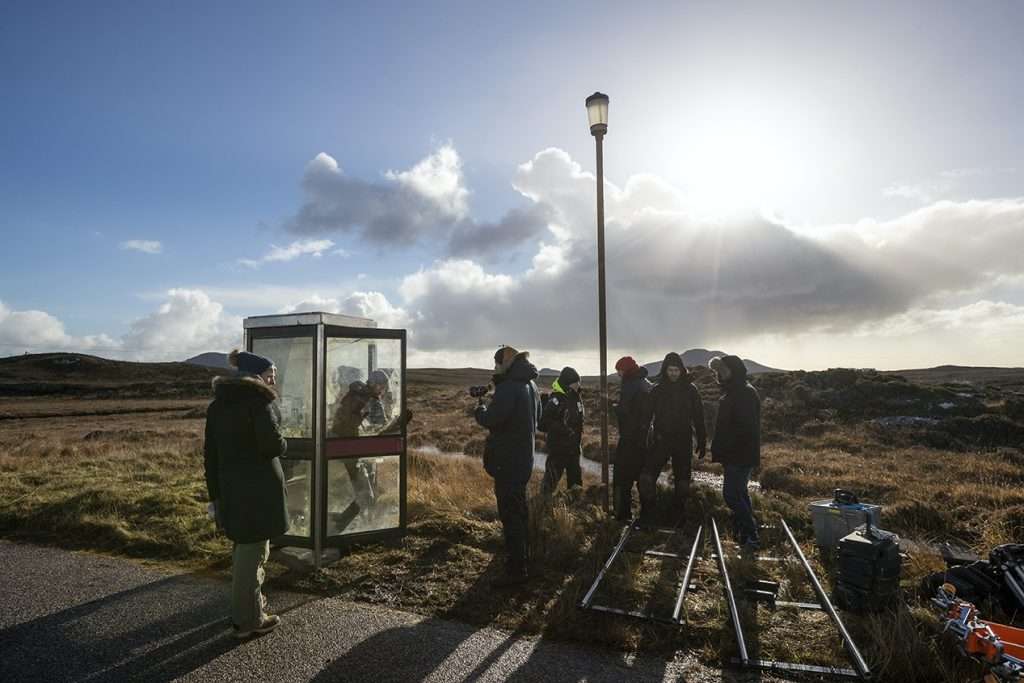 Sharrock reunited with up-coming British cinematographer Nick Cooke – who previously shot the director’s no-budget debut feature Pikadero – to craft a particular deadpan cinematic language that, amid the wild and rugged landscape, would simultaneously convey the characters’ sense of community and alienation, whilst making the audience pause for reflection.

Limbo was named as an Official Selection of the 2020 Cannes Film Festival, but was not screened due to the cancellation of the physical festival in light of the Covid-19 pandemic. It had its world premiere at the 2020 Toronto International Film Festival, where it gained hugely-positive reviews, before garnering several awards and nominations – including two BAFTA and four British Independent Film Awards nominations, including one for Cooke’s cinematography.

Limbo was shot over the course of five weeks during October and November 2018 in the remote islands of the Outer Hebrides – including North and South Uist, Berneray and Grimsay – which are interlinked by bridges. During prep, Cooke and Sharrock rented a car and scouted the entire archipelago, noting the locations of all bus stops, phone boxes, schools, playgrounds, houses, beaches and heather-strewn fields. This enabled them to subsequently plot 95% of the camera positions they wanted. When it came to the shoot, the cast and crew endured gale-force winds and extremes of cold to deliver the striking result. 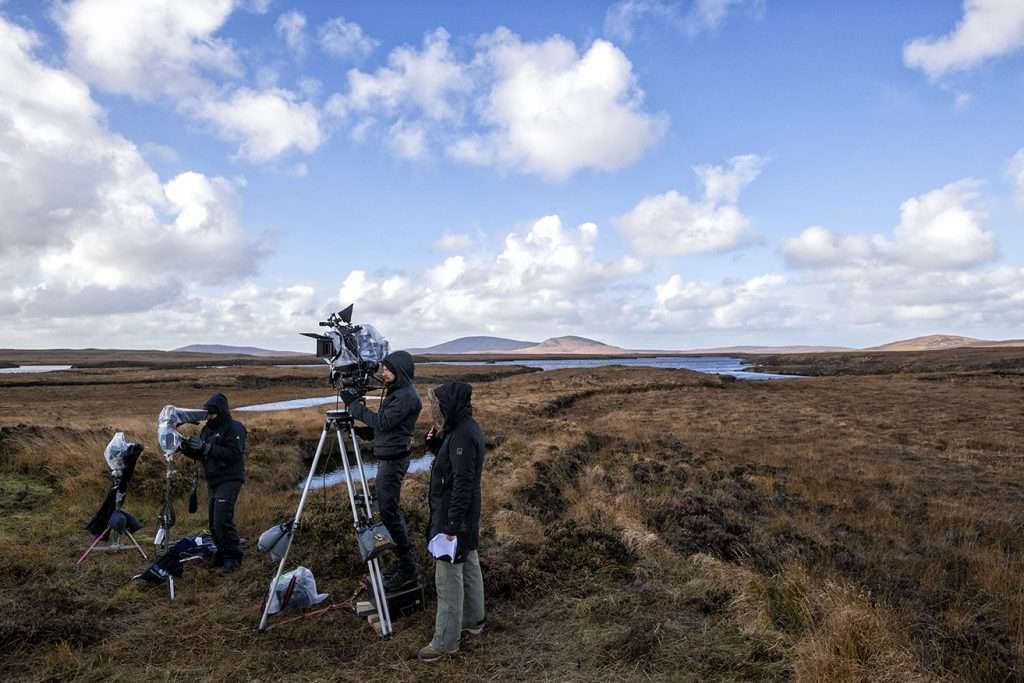 “Ben is an intelligent director, with a singular cinematic voice, and his vision for the film was similar in style to the way we shot Pikadero – for things to be quite static and composed,” says Cooke, an NFTS graduate, whose recent credits also include Claire Oakley’s Make Up (2020) and Emre Kayiş’ Anatolian Leopard (2021).

“Displacing the action to a barren, remote outcrop, automatically focussed the storytelling very much on the people, and their collective and individual situations. But in doing so, it also it also acted as a magnifying glass that amplified and exaggerated the broader issue of what it might be like to live as a refugee elsewhere.” 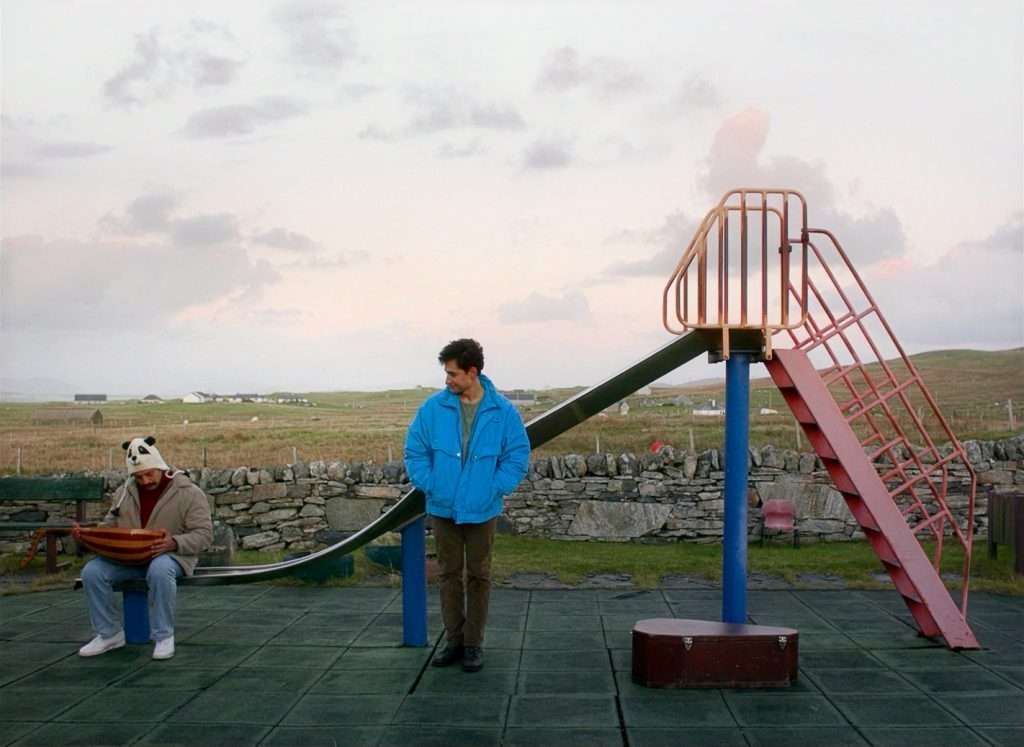 Cooke continues, “The depiction of our characters, in a state of seemingly endless purgatory, was the first thing we discussed. How best to capture the portraiture of people and the landscape? Also, Ben wanted, especially early-on in the film, to feel that everything – the characters, telephone boxes and streetlights – had been picked up and dropped into this landscape.

“We both love 2.39.1 and during our extensive recces around the islands, we took lots of photos and framed them with widescreen in mind. However, as we explored the expansive horizons and cramped interiors we were going to shoot in, we realised the more box-like 1.37:1 Academy aspect ratio suited the storytelling far better. It could be used effectively to both capture the wide landscapes and to hem-in our characters and thereby underline their entrapment.”

Cooke says that visual cues for the film came from the work of stills photographers – such as Czech photographer Josef Koudelka, who took photos across Europe, and French photographer Raymond Depardon, who took some amazing images in Glasgow. For films, they considered Wim Wenders movies, shot by legendary cinematographer Robby Müller, especially those filmed in America. 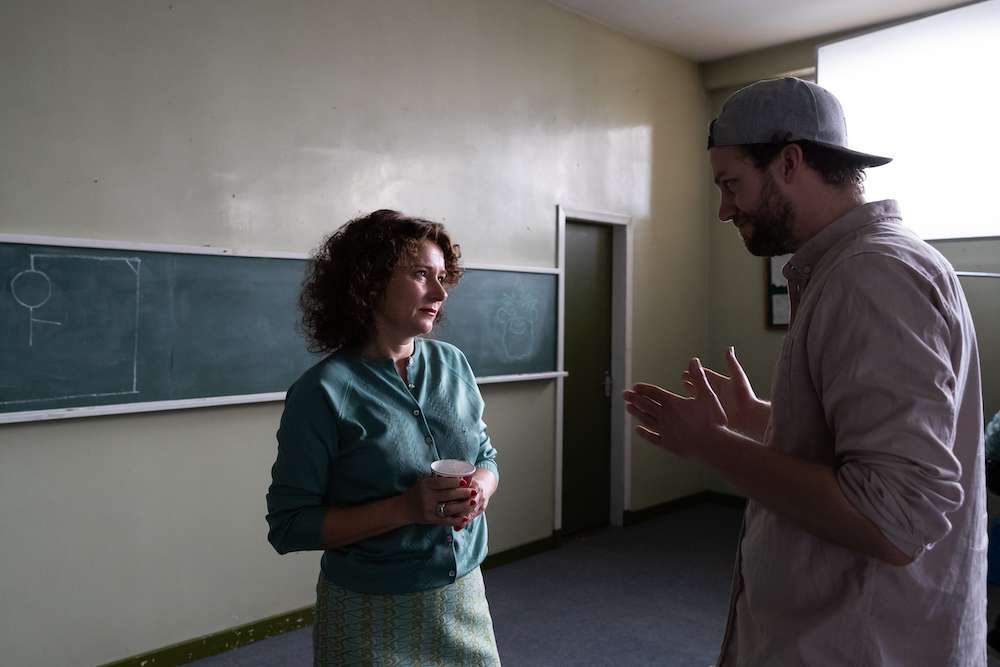 “Curiously, it was only on reflection that we realised many of our influences were from visual artists who had created detached, observational images of places that were not their native homelands,” Cooke remarks. “Which is how we felt when exploring this island – it’s very different to my more gentile homeland of Devon”.

After testing at Take 2 Films (now Procam Take 2) in London, Cooke selected the ARRI Alexa SXT, plus an Alexa Mini as a standby, fitted with ARRI Ultra Prime lenses for the shoot, together with a doorway dolly a few lengths of 8-ft track, combined with a slider and tripod.

The production was captured in ProRes 4444 XQ, open gate mode, framing for a 1.37:1 extraction, with the camera rated at 800ISO for night exteriors, and at 1600ISO for day exteriors. Cooke also used 1/8 Tiffen Black Promist for the majority of the shoot, switching to 1/4 strength of that filtration for night shoots, in order to effect the highlights and to generally soften the quality of the image.

“We really had to be super-organised in advance of production, making sure we had all the kit we would need, as working so remotely meant there would be a considerable lag in getting additional kit delivered,” says Cooke. “We also needed to keep things lightweight as we often had to walk through fields to get to our chosen camera position. I had used a similar combination of wide-angle lenses on Pikadero, but on this film we mainly used the 16/20mm for close-up’s and mid-shots, and the 28mm for our wide shots. The 32mm was our ‘long’ lens, although we rarely used this.” 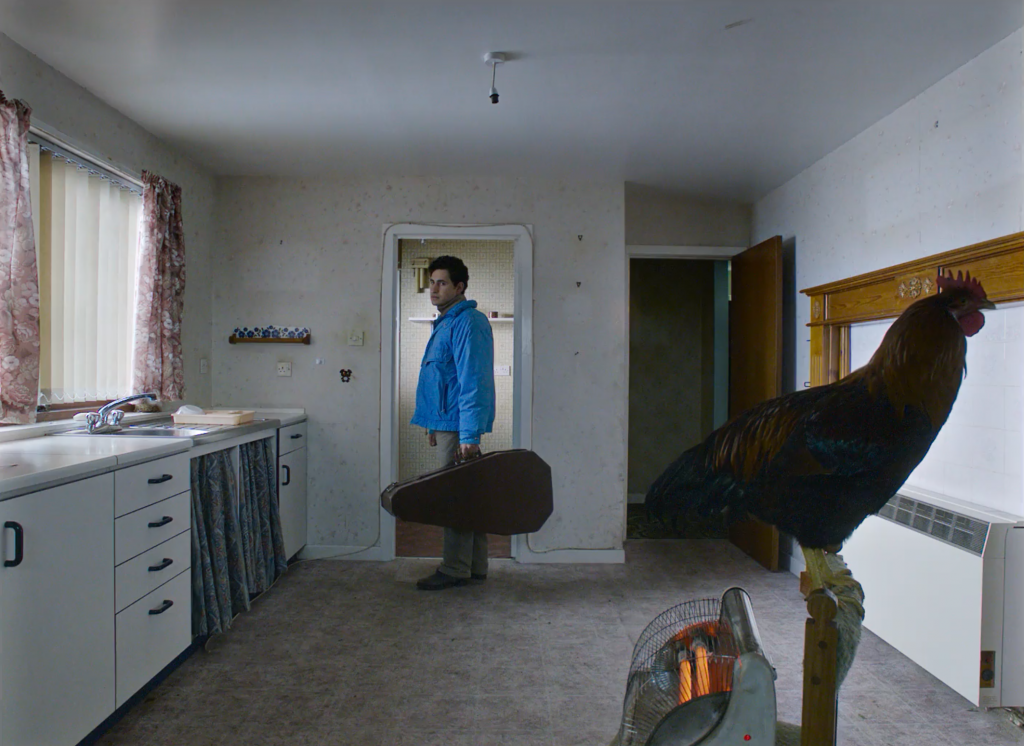 Prior to production Cooke worked with colourist Jodie Davidson at Technicolor, London, who also completed the final DI grade, to develop a small selection of LUTs, which saturated certain colours (the main ones being Omar’s blue jacket and the pink cast on his injured arm), as well as reducing the highlights away from a bright white.

“The island itself gave us natural greens and browns, the heather muted white and purple hues. We added colours that were in the middle of that spectrum – particularly the wardrobe, such as Omar’s – so they would pop just a little against the backgrounds,” he says.

“Our framing was very compositionally-led, almost always with shots blocked to the camera position. Ben also likes a static camera. So by not moving the camera very much – with very slow pushes-in or 90-degree rotations – combined with centre-framing of the horizon, our characters and objects, these made bold statements and helped to heighten the whimsical feeling.” 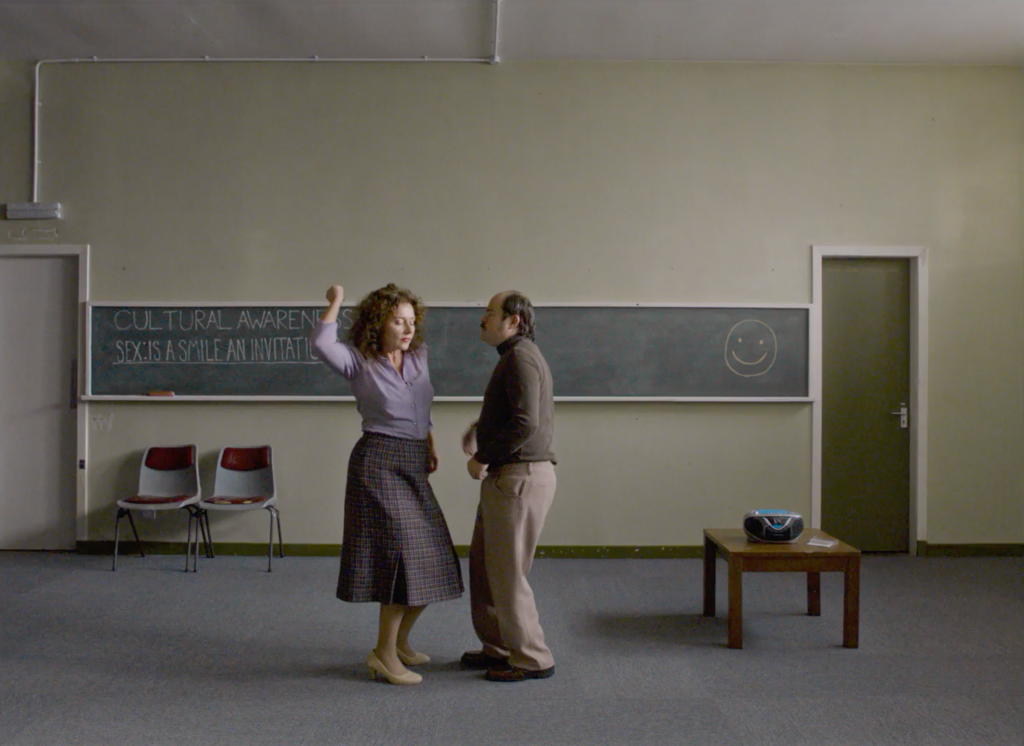 To maintain a naturalism to the look, most of the exteriors were shot in available light, with blackouts regularly used to achieve and manipulate negative fill, and reflectors to subtly shape the light around a character.

“Interiors were typically lit by practicals, supplemented by bounced/diffused light from ARRI M40 lampheads. to help us achieve the deep depth-of-field required to hold multiple characters in focus. Often we would be shooting at T8 or T11,” Cooke explains. “The lighting team also developed a working orange streetlight on wheels, that could be easily rolled into the background of a shot, with its base careful concealed with grass by the art department.”

Cooke operated during the shoot. His crew were all from Scotland, with David Hutchison working as focus puller, Steve Arthur as gaffer, Mark Dorriss the key grip, and Grant McPhee the DIT. 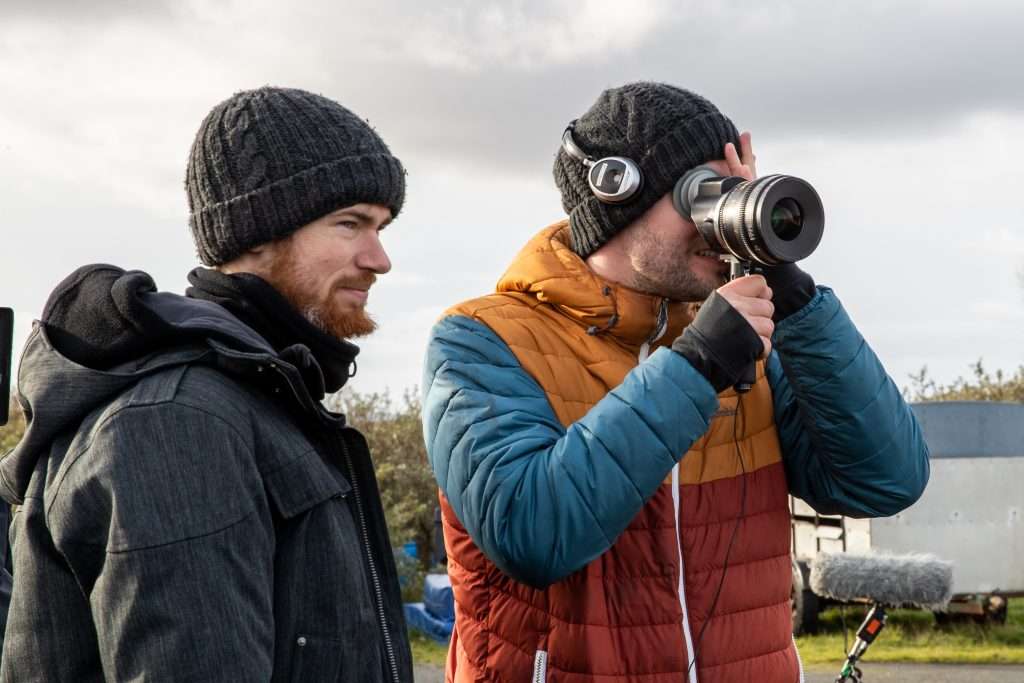 “This was my first time collaborating with them, and they worked in what were generally challenging conditions – freezing cold and strong winds. We sometimes had six people clinging to lighting stands and rain deflectors to stop the kit from being blow away,” Cooke declares.

“I also have to thank the people of the islands who, despite us disturbing the peace, were very nice and incredibly helpful during our time there – one even lent us his boat for our waterborne sequence.

“We could have shot Limbo on the mainland, and faked the impression of being on an island. But, by going to the Outer Hebrides, the landscape really dictated a lot of the look of the film. The constantly changing weather made each day a challenge. The conditions could change so quickly. In one take, we might be framing the mist rolling in, and then by take two the wind had blown-up to leave not a single cloud in the sky. In one way, the landscape was our friend, because it gave us so much variety.”