With a story of two different worlds, being able to highlight the differences visually enhances the story

When writer/director Christian Rousseau envisioned the look of No Loss // No Gain (NLNG), he knew that the two worlds the film would portray would need to be photographed differently, but the idea of using completely different lenses from two different manufacturers was not part of the initial plan — until cinematographers John Sedlack and Kate Steinhebel had to switch which unit each would photograph. 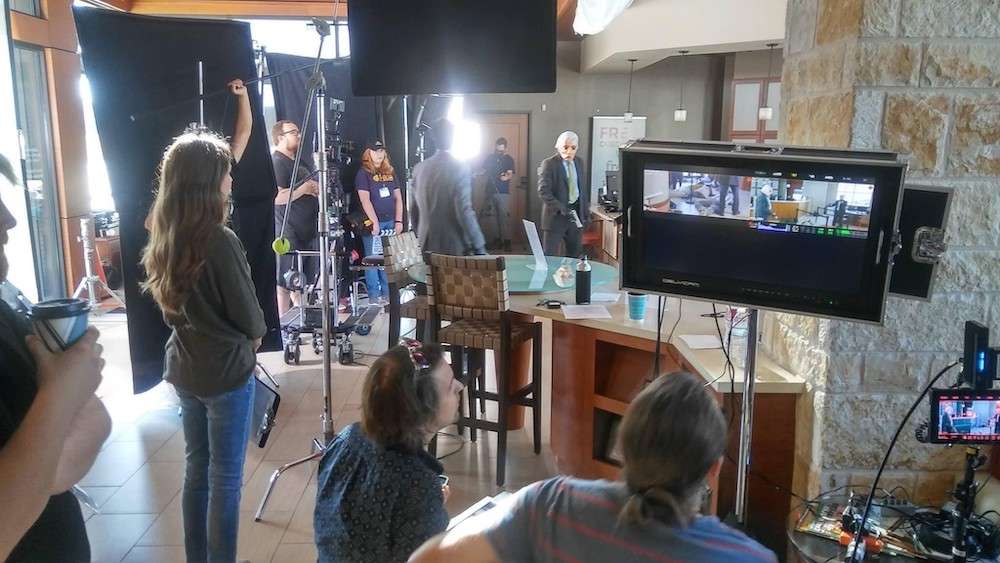 Originally, Kate Steinhebel was slated to shoot the first unit, while John Sedlack would shoot second unit. That all changed when Steinhebel found herself with a scheduling conflict and switched duties with Sedlack. That would prove to be serendipitous for NLNG, and give Steinhebel the opportunity to pitch using Cooke Optics miniS4/i primes for everything she would shoot, as the story takes place within a small town bank (first unit) and the larger outside world with offices of corporations and government (second unit).

The story of a mysterious modern-day Robin Hood giving the victims of a bank robbery a million-dollar opportunity takes place primarily in a bank — where a real bank was used in San Marcos, Texas during the weekends — in both the bank lobby and then a conference room throughout one day and night. While the second unit opens up the rest of the world to viewers.

“The bank was a tight environment and we wanted that kind of look using our RED Epic Dragon (6K) as our A camera and our RED Scarlet (4K) as our B cameras for the main unit,” said Sedlack. “While our lens choice was to be the same for both primary and second unit photography, Kate had a great idea because she’s a great DP.”

“I knew that the more sophisticated — and expensive — look that I could get out of Cooke miniS4/i primes teamed with an 8K RED Helium would really enhance the project and give Christian room to move around the frame,” said Steinhebel. “It was just a matter of a little convincing. The world I would be shooting is entirely different from the small bank and the tight confines of the conference room. I would be shooting bank executives, government officials a high-end hacker’s office, plus mansion exteriors and in parks — that’s an entirely different look and feel.”

Steinhebel has her own set of Cooke miniS4/i primes, consisting of the 18, 25, 32, 50, 75 and 100mm (with swappable coated and uncoated front elements) and with her experience seeing what Cookes are capable of, knew that they would be perfect. “I’ve always had a natural affinity for Cookes; looking at that bokeh or the falloff. I would be reading American Cinematographer magazine, and at end of articles it would say “Cooke”… and the films that I thought were shot beautifully, I would go on shotonwhat.com and discover that they were shot with Cookes.”

To convince Rousseau and Sedlack to use Cooke miniS4/i primes, Steinhebel shot screen tests in LA while the first unit was filming in Texas. “I had just bought the lenses and shot tests in 6K on the RED HELIUM and in 8K on a RED DRAGON. I sent Christian and John some stills, and then sent a second batch with colouring showing them what they could get from the Cooke lenses versus what they were using on the first unit.”

“The look of Cooke’s really wowed us,” said Sedlack. “It doesn’t take away from the story by shooting on two different lenses, it adds to it with the two different worlds. The Cooke’s shot clean and opened everything up with no gritty feel like in the bank.”

Deciding on Cooke primes for the second unit would give NLNG an entirely new look with a variety of looks from the different DPs that complement each other. “Kate amplified what we were going for,” said Sedlack. “In fact, it enhanced everything. It really took me back a minute when we saw what she was proposing… and why she was first pick for the first unit.”

What sets the second unit story apart from the first unit’s blue collar bank robbery story is that it deals with white collar crime. “The Cooke lenses gave us a nice and softer appearance with great falloff. The main unit lenses were more reality driven, while we had a definite cinematic look, plus using the /i technology on-set for monitoring helped a lot,” said Steinhebel.

“The Cookes really expanded our world out of the bank, which is like 12 Angry Men or Dog Day Afternoon,” said Sedlack. It made NLNG our own. And 80 years down the line, I hope that someone is referencing the film for what we were able to accomplish.”