Refreshing users’ memories on classics from Nanlite with Forza 60/60B II, an upgrade from the first generation to explore the potential of small and compact LED even further. The true potential of compact and lightweight LED spotlights has been realised with the new, second-generation Nanlite Forza 60 II and 60B II. Making Nanlite’s voice heard more clearly this time with the official launch of Forza 300/300B II & 500/500B II – all comprehensive upgrades from the inside out. Based on years of genuine user feedback and their own research and development,

Nanlite is ready to demonstrate how much their LED spotlights have improved since they were first introduced three years ago. With the new Forza 60 II and 60B II, many aspects have been taken to the next level without compromising
the strengths on first generation, such as interaction, control, noise management, and more. Forza 60/60B II pack stunning output inside ultracompact bodies just as its predecessor did, illuminance levels stand at 3,420lux/2,096lux@1m with light only. With Maximum/Constant output modes incorporated, Forza 60B II features uniform light ratio while adjusting CCT from 2700K to 6500K. 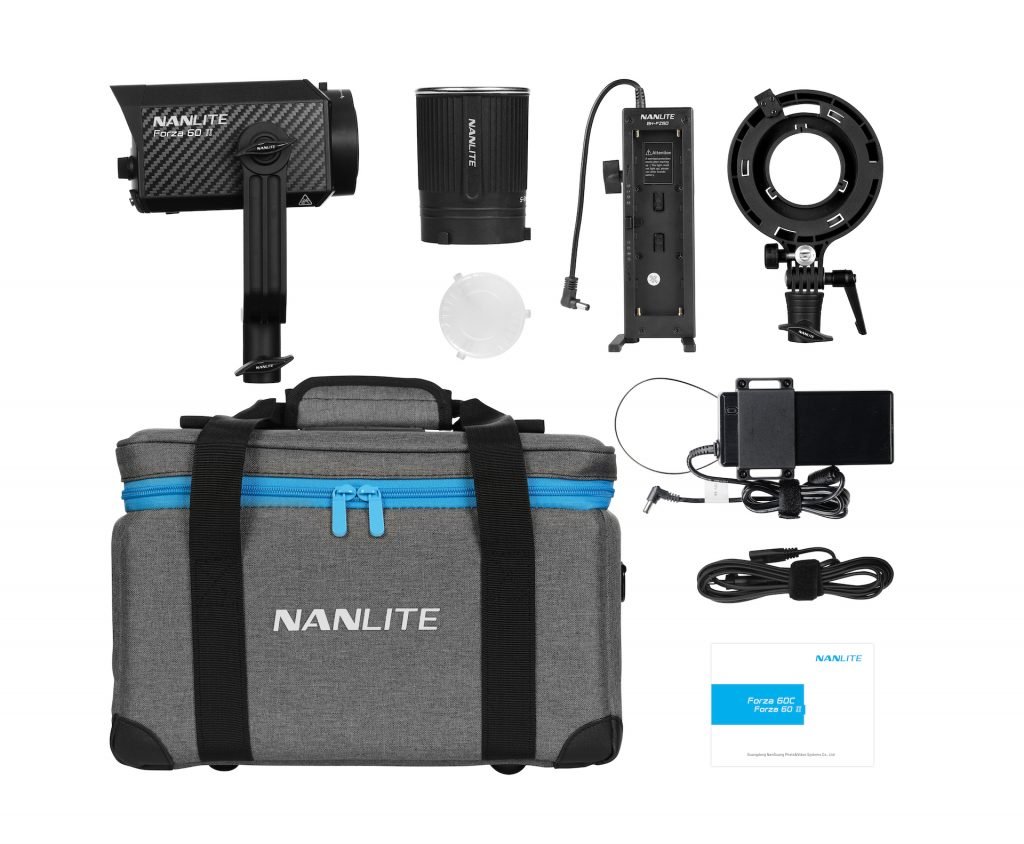 Both Forza 60/60B II also perform excellently in colour rendition, CRI and TLCI rated at 96 and 98 respectively. Building in 11/12 special effects with each parameter adjustable, Forza 60/60B II allow creators to bring their imaginations to life with the help of multiple control options, including on-board, 2.4G, Bluetooth, and DMX/RDM. Noise management has been improved for the lights to stand out from competitors by lowering noise level to 20dbA even with the fan rotating, thus no need to shut down the fan for most sound recording applications to sacrifice intensity.

Forza 60/60B II use the same compact and sturdy FM Mount. An included adapter provides compatibility for Bowens mount accessories. Apart from AC power, the lights have DC power option via a battery grip compatible with either NPF or V-mount battery. Both lights support firmware upgrade via the USB port on the bottom of lamp head, keeping the window to the future open. More new features and operations will be brought on board based upon user feedback via firmware updates.

All innovations and improvements applied in the 60W range have been also integrated in 300W and 500W ranges with proper modifications. Since Nanlite Forza 60 II and 60B II never stops exploring the field of LED lighting technology
for the purpose of establishing a Chinese brand respected by the world, their unrelenting efforts bear additional fruit on the new Forza 300/300B II & 500/500B II. Four point-source lights take to the stage at the same time to recombine the DNA of Forza and revamp the process of creation even more. Covering power consumption of 300W/500W and CCT range of 2700K-6500K, more possibilities in creation will be opened up with them working together with other Forzas
that are already making a difference on the market. Forza 300/300B II & 500/500B II inherit the same Forza gene featuring an even field of light with quality.

The typical intensity loss when adding bi-colour functionality is avoided this time. All fixtures feature
W(RG)/WW(RG) colour mixing systems with G/M±80 tunability. Nanlite R&D team thus provide creators with perfect weapons to tackle various lighting situations with ease. Colour rendering capabilities of Forza 300/300B II & 500/500B II have been re-evaluated and improved in a comprehensive manner as well, making them reliable additions to filmmakers’ toolkit. Giving true-to-life colours is a sure thing with Forza 300/500 II CRI/TLCI scores of 96/97 and Forza 300B/500B II CRI/TLCI scores of average 96/97.

In terms of both form factor and internal structure, enormous efforts have been put into perfecting the designs. The control box features a new compact concept with the power adapter incorporated inside, reducing the
overall control unit size of Forza 300/300B II by 37% and Forza 500/500B II by 16%. V-mount battery plates
on both sides, curved yoke with one-sided locking mechanism and integrated quick-release device all
provide more convenience on set. The control interface features intuitive operation with comprehensive controlling methods.

All four fixtures include built-in 2.4G and Bluetooth dual modules, providing a playground for Nanlink to stretch its muscles in studio shooting and live streaming. Support DMX/RDM control via wire connection to meet the exacting
demands of film crews for more complicated lighting control in groups with precision and stability. When comes to power supplies, these four fixtures can handle a variety of shooting scenarios effortlessly with dual batteries, and 14.4V-14.8V batteries can be used simultaneously. All units also support single battery power operation for fast power switching when in low battery. This innovation enables hot plugging as well as hot swapping between AC/DC for Forza 300/300B II & 500/500B II, free of interruption of operation. The Forza II series incorporates a new adjustable cooling system with 4 operation modes available:Smart, Full Speed, Low Speed and Off. Noise level lowers to 23dBA in SMART mode. Noise management is also greatly optimised over the last generation in Full Speed mode. There will be no noise interference
concerns for sound-sensitive shooting environments, such as interview, MV and TVC shooting. 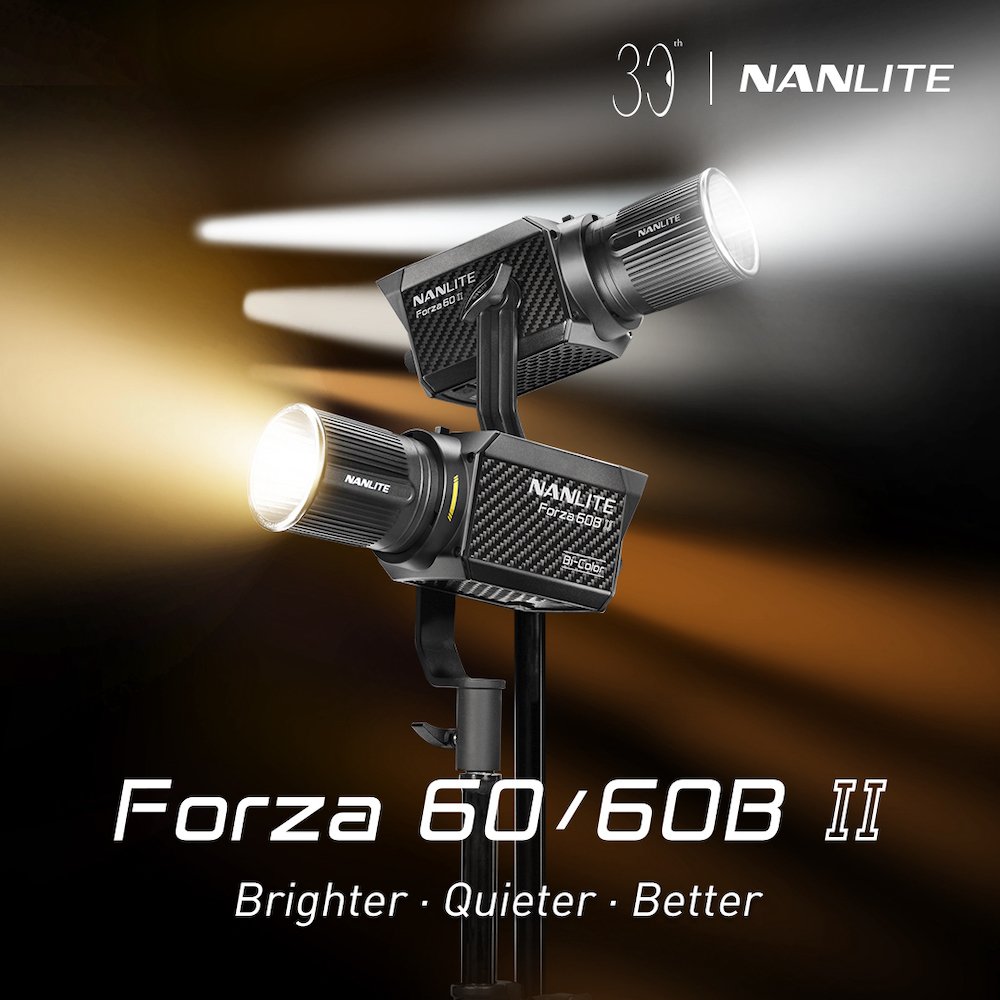 The Forza 300/300B II & 500/500B II come with a standard Bowens mount with an extra umbrella mount. Assorted modifiers under Nanlite or other third parties can be attached seamlessly to unleash infinite light-shaping possibilities. Not only does the quick release clamp come standard, but also the extended connection cables -– DC connection cable (3M) and AC connection cable(6M). With 7.5M and 12M DC connection cables sold separately, rigging the fixtures up high on set will be a breeze. The included carrying bag has been upgraded as well – made of solid hollow plates and with enhanced stitches outside for more durability. With 11 effects built in Forza 300/500 II and 12 effects built in Forza 300B/500B II respectively, the lights help bring complex creative ideas to life for filmmakers. All FXs are striving for a harmonious blending of practical imitation and artistic modification as well as expanding the possibility of the scenarios you pictured in mind.

Parameters for every single effect are tunable via on-board control with more customisation available via
Nanlink App. Built-in USB port allows for firmware upgrade via USB flash drive, leaving the door open for
unfolding potentials in the future. Nanlite managing director Nancy feels so proud about this bundle release, saying

“We always think that the Forza series is one of the pillars in our product portfolio. We’re determined to make people first think of Forza at the mention of Nanlite. I think this time people will have a deeper impression about how Forza will
change their life in content creation and filmmaking.”