Arseni Khachaturan • Bones And All

Captured with vibrant colour on Kodak 35mm 500T 5219 film, director Luca Guadagnino’s cannibalistic period road movie, Bones And All, may be gruesome, twisted and hard to stomach in places, but its deeply-romantic, thought-provoking storyline and visually-engaging production values have wowed audiences and critics. 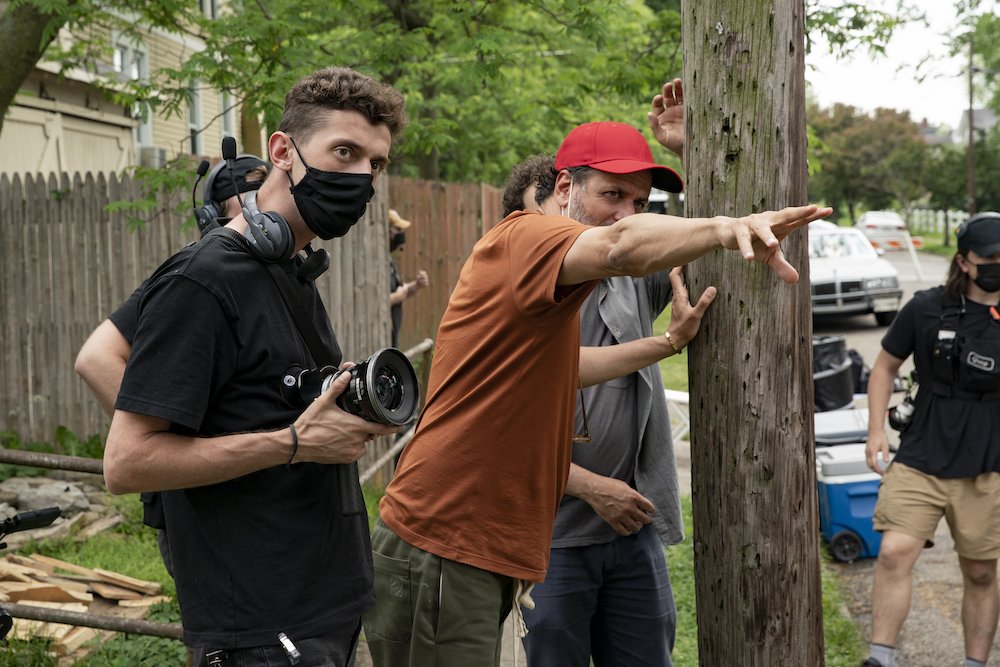 Set in 1980’s America, the film follows Maren, a young woman from the margins of society, who exhibits unstoppable urges to feed on human flesh. When her father abandons her after a grisly episode at a friend’s house, she boards a Greyhound bus and heads cross-country in search of her long-lost mother.

En route Maren learns from a creepy loner that she is an “eater”, with a carnivorous predisposition that will only exacerbate with age, and that she will soon learn to spot other eaters by smell. Indeed, Maren encounters Lee, a slender, handsome drifter, and fellow eater, and the pair embark on a macabre, 3,000-mile odyssey through the back roads of America. Love blossoms amongst the carnage, but despite their best efforts to make a life together, all paths lead back to their terrifying pasts and a final stand that determines whether love can survive.

“Luca wanted a naturalistic approach to the cinematography”

Bones And All premiered at the 2022 Venice International Film Festival, where it earned a long standing-ovation, a Silver Lion for best direction, the Marcello Mastroianni Award Award to Taylor Russell for Best Young Actress, plus critical-acclaim for its lead performances, narratives about marginalisation, survival and dissent, and its wild mix of sun-kissed and blood-splattered visuals. 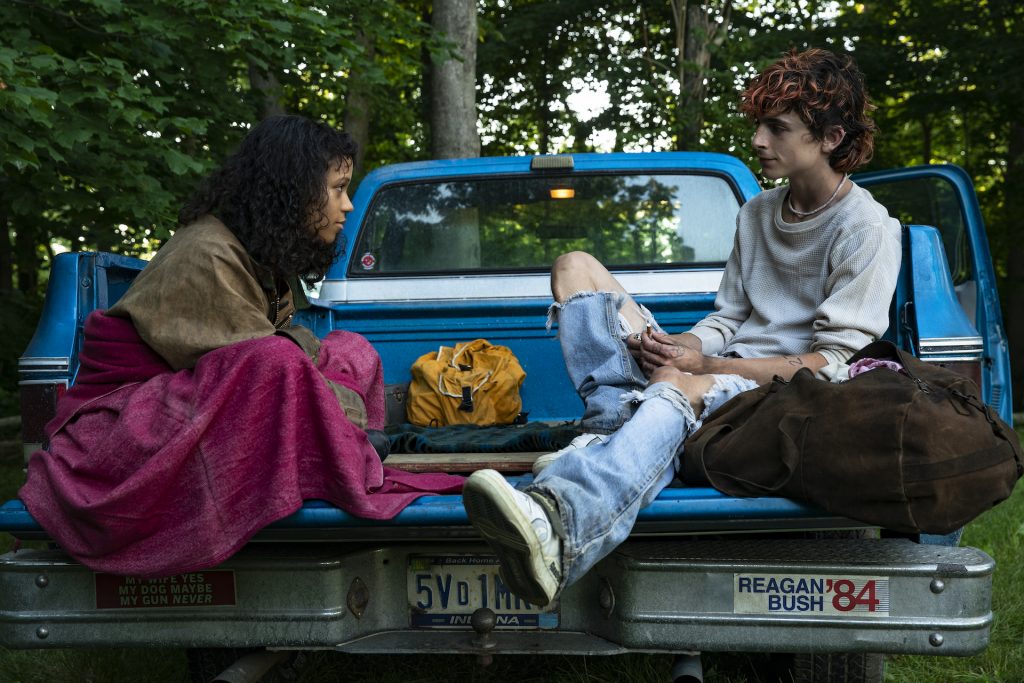 Bones And All was directed by Guadagnino from a screenplay by David Kajganich, which was based on the 2015 novel of the same name by Camille DeAngelis. Taylor Russell and Timothée Chalamet lead an ensemble cast that includes Mark Rylance, Michael Stuhlbarg, André Holland, Chloë Sevigny, David Gordon Green, Jake Horowitz and Jessica Harper.

Cinematographic duties on the film fell to cinematographer Arseni Khachaturan, who is based in New York and whose previous work includes director Dea Kulumbegashvili’s multi-award-winning Beginning (2020), which he filmed on Kodak Vision3 35mm 500T 5219. 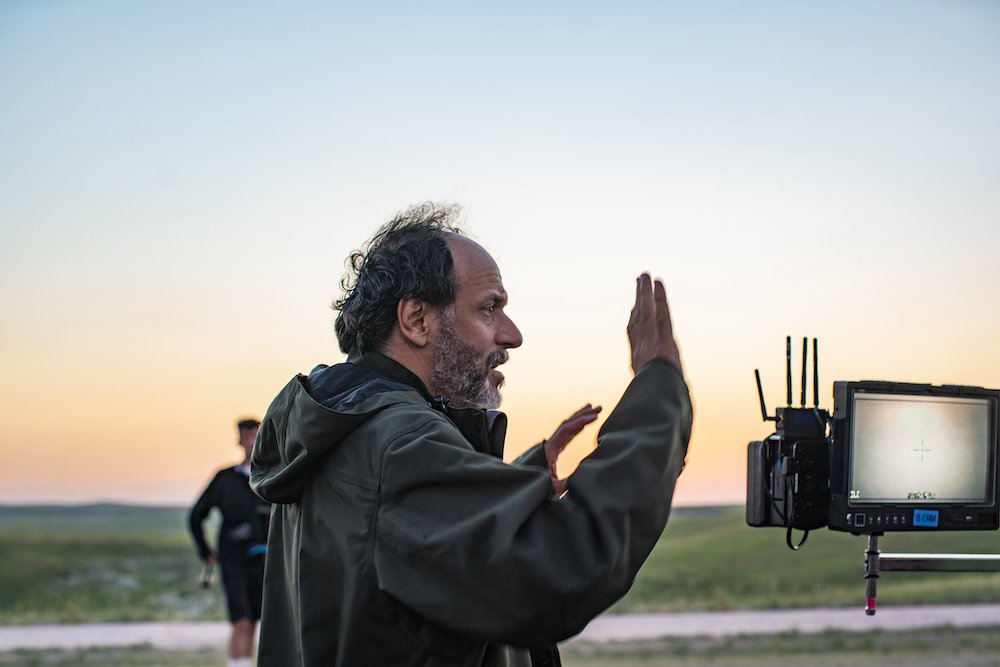 “I had not worked with Luca before, although I was well-aware of his work, and when I became attached to the job I made a point of watching every single movie, documentary and short film he has ever made to immerse myself in his world,” says Khachaturan.

“Luca had seen my work when was president of the jury at the 2020 San Sebastián International Film Festival, where Beginning won the Golden Seashell and the Jury prize. I got a call from him couple of months afterwards about a project he had in mind, although that did not take off in the end. But he came back later-on with the script for Bones And All, and things got into motion pretty fast after that.” 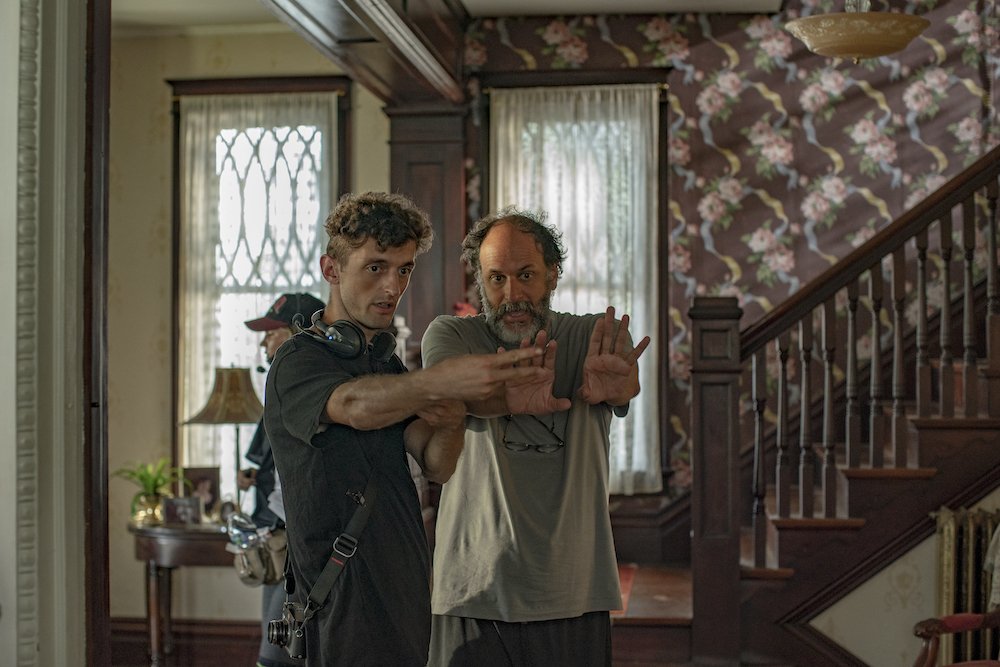 Khachaturan remarks that, “David’s script was brilliantly written and I was really excited. Although I did a lot of research about the history and culture of that era, when Ronald Reagan was president in the 1980s, I wouldn’t say that there was a specific look that Luca had in mind when we first discussed the script.

“First and foremost it’s a romantic road movie about the precious, fragile love between two characters who are underdogs on the fringes of society. Although they are fierce and cannibalistic, and there are some pretty bloody scenes, we had no interest whatsoever in producing it with any kind of shock value that you might see in a typical horror film. Luca wanted a much more naturalistic approach to the cinematography.”

Production on Bones And All took place at multiple locations across several different US states, including Ohio, Indiana, Kentucky and Nebraska, between May and July 2021. Khachaturan had nine weeks of prep prior to the shoot, which included a lot of time spent on-the-road with Guadagnino and production designer Elliott Hostetter. 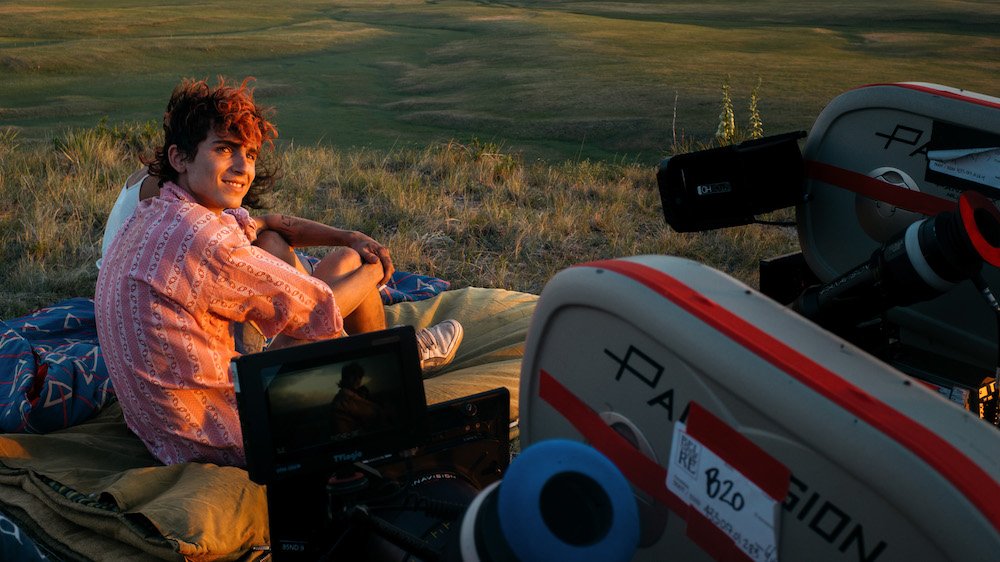 “I did a lot of the driving during our location scouts, many thousands of miles across state lines,” Khachaturan remembers. “I have been living in the US for over ten years now, and many of the places we visited have definitely not been seen or represented in films, photography or art in general. So it was very interesting for us to explore and absorb the changing nature and colours of the landscapes and to see how we could reflect those in the film.”

Aged 28 when he shot Bones And All, one might have expected Khachaturan to be an exemplar of all-things-digital, but he reveals a remarkable knowledge and experience of shooting on celluloid.

“The lenses made a really beautiful match with celluloid film”

“Although I do shoot digital projects, most of the features I’ve shot so far have actually been on film, which is perhaps a little strange because nobody ever taught me directly how to do that,” he says.

“I moved to the States when I was 18. Rufus Burnham, at The Camera Division in Burbank, encouraged me to build and play around with the film cameras and lenses there, and I pretty much taught myself how to shoot tests, process the results and learn how to expose film negative correctly. 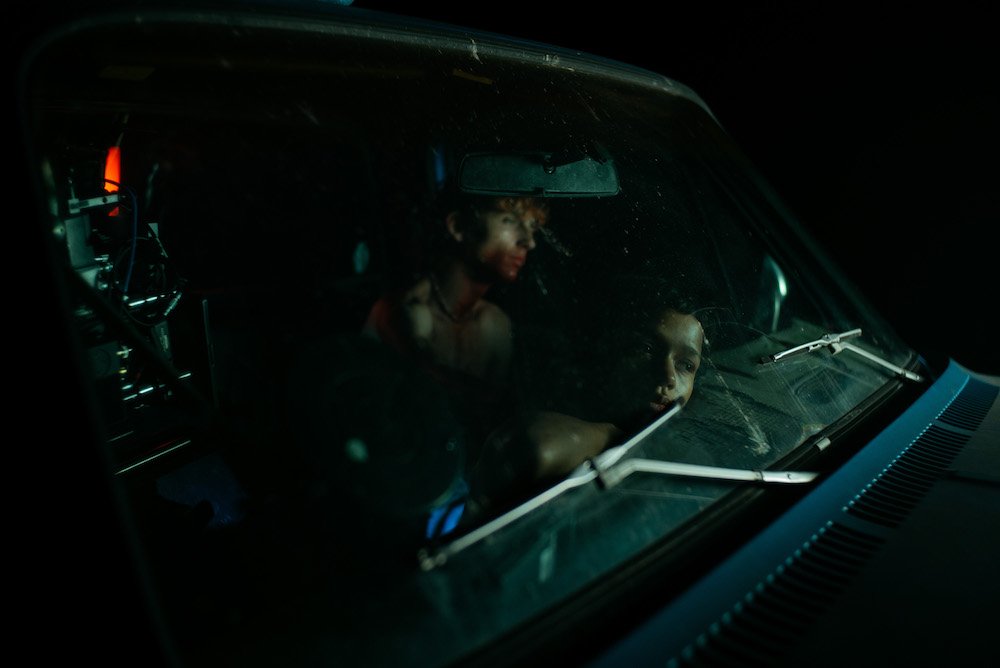 BTS shot of Timothée Chalamet (r) as Lee and Taylor Russell (l) as Maren in Bones And All, directed by Luca Guadagnino. Photo by Yannis Drakoulidis. © 2022 Metro-Goldwyn-Mayer Pictures Inc. All Rights Reserved.

“I started to pick-up fashion projects, music videos and commercials, shooting on 16mm, and then moved to New York, where I struck up a great relationship with Panavision, and started shooting shorts on film.

“I then went on to shoot Eyimofe (This Is My Desire) (2020 dirs. Arie and Chuko Esiri) in Nigeria on 16mm, followed by Beginning on 35mm. After Bones And All, I worked on The Idol series on 35mm for Sam Levinson, where we got through millions of feet of film stock. 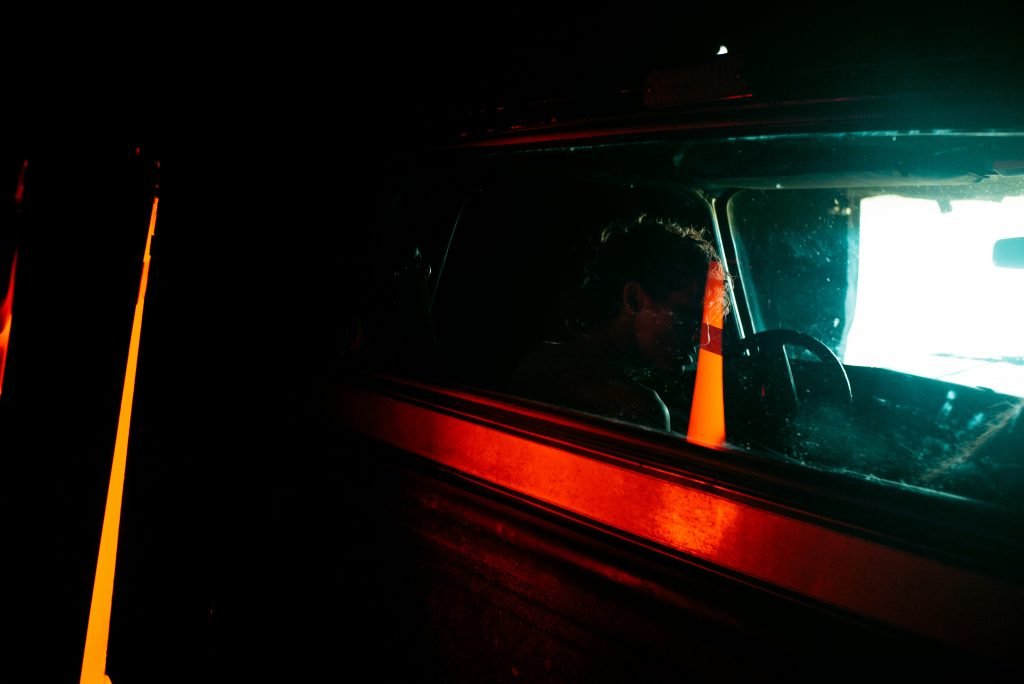 A dramatic moment in Bones And All, directed by Luca Guadagnino. © 2022 Metro-Goldwyn-Mayer Pictures Inc. All Rights Reserved.

“It made me very happy when Luca told me he wanted to shoot Bones And All on film, as it is such a unique and special medium. I think that, in relation to the tangible sensations in the narrative – the period setting and wardrobe, the romanticism of the love story, the faces and American landscapes, the physical acts of cannibalism, the vibrancy of being young, alive and present in-the-moment – film was the perfect choice. The result just would not have been the same if it had been shot digitally.” 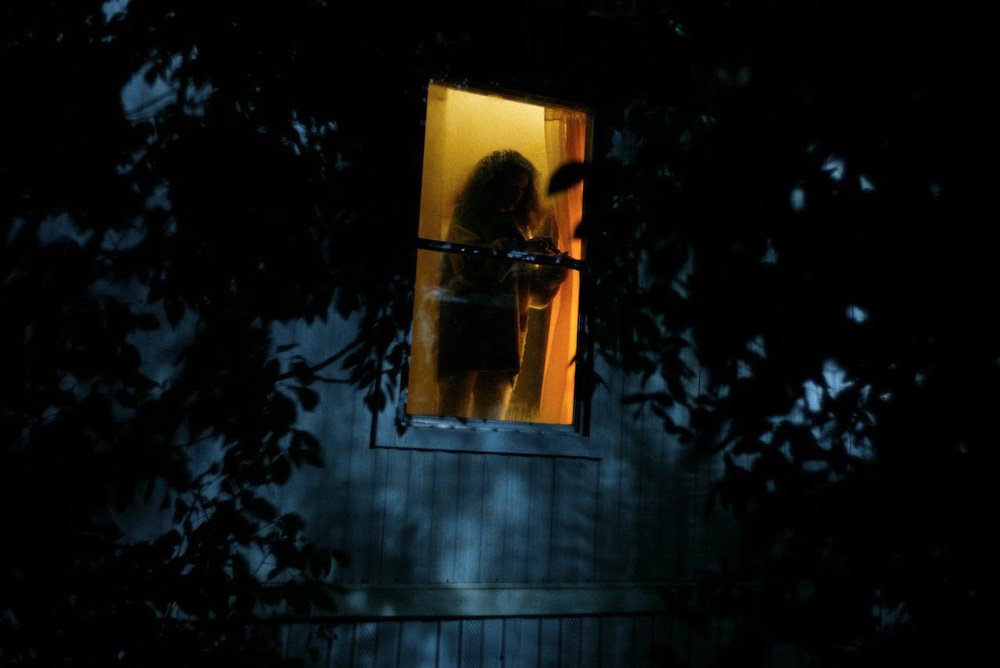 A dramatic moment in Bones And All, directed by Luca Guadagnino. © 2022 Metro-Goldwyn-Mayer Pictures Inc. All Rights Reserved.

“The Ultra Speed and Super Speed lenses were made in the 1970 and early 80s, and they are a really beautiful match with celluloid film,” he says. “On the practical side they’re fast, many starting at T1.3, and aesthetically they bring a gentle, luminous and painterly quality to the filmed image, whether you are shooting faces or landscapes, that is reminiscent of films from the period.”

Khachaturan chose just one filmstock, namely Kodak Vision3 5219 500T, for the entire shoot. “Of course, I could have selected different Kodak Daylight and Tungsten stocks for the production, but Luca and I share the same sentiment towards the 500T in terms of the natural colours, inherent texture and grain it renders, and we wanted a visual consistency of these throughout the film. Also, the 500T is a really versatile, beautiful and vibrant stock, that’s gentle on faces, in both day and night-time photography, which was very appropriate for this film.

“There were a lot of very bright and vivid daytime scenes, and the 500T has a great ability to retain details in highlights in extreme lighting situations. We shot a lot in magic hour as well, and the colours look amazing. But our characters also inhabit the shadows, and the 500T performed really well in limited light scenarios, where the scene was about hinting what might be hidden in the darkness.”

Film processing was done at Kodak Film Lab New York, with 4K scans and dailies performed at Technicolor Postworks New York, and the final grade completed at Frame By Frame in Rome. 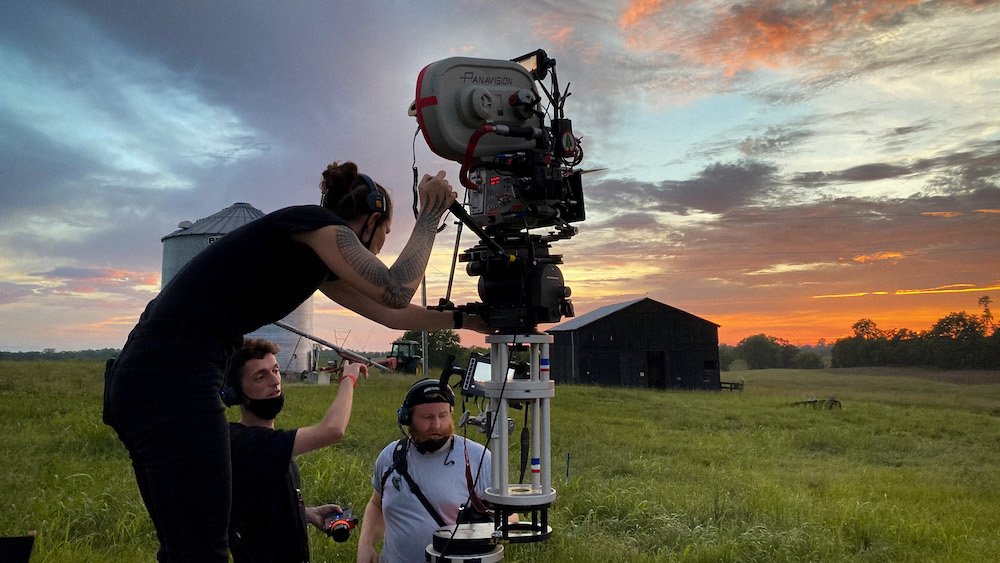 “The final colour grade was extraordinary,” says Khachaturan. “The locations we had captured in-camera on 35mm film were so visually diverse, vibrant, emotional and intense, and we were struck by huge range of colour on the screen in the grading suite.

“But rather than try to control or wrangle that with some sort of homogenous look, we took the opposite approach, and decided to expand the colour palette even more. It’s mind-blowing how much colour you can squeeze from the scanned film negative. When you look specifically at the scenes we shot in Nebraska, and you look at the range of colours across the verdant landscapes, the sky, the light and on faces and wardrobe, it’s unparalleled.”

Looking back on his experience, Khachaturan observes, “Making Bones And All was a wild ride. I felt humbled and incredibly excited to work with Luca, who is an amazing collaborator, and a blessing to work with such amazing actors too. It was really emotional to be in the audience and experience the ovation at the Venice premiere, and to have lived-up to Luca’s vision.”