Whether Star Wars has changed the course of your life or merely your viewing habits, if you have a soul chances are it will be touched by Our Star Wars Stories. Jordan Hembrough hosts this original digital series from Lucasfilm and StarWars.com. He chats with fans as they unravel their true-life inspiring tales that are a result of their Star Wars bond.

After completing 8 episodes in the normal pre-COVID world, this up close and personal interview-style show opted to continue production despite the new reality of safe filming restrictions. The production team, Monkey Deux, (www.monkeyincorporated.com/) headed by Alan Griswold, was tasked with working out a new workflow, sans their usual full production crew.

Griswold had some rethinking to do. Unlike the first successful season shot on location, there would be no Pacer van stuffed with gear along with him and DP John Lizzio traveling to the various subject’s locations. This time everyone would be safely at home. But it had to still look Star Wars-good. 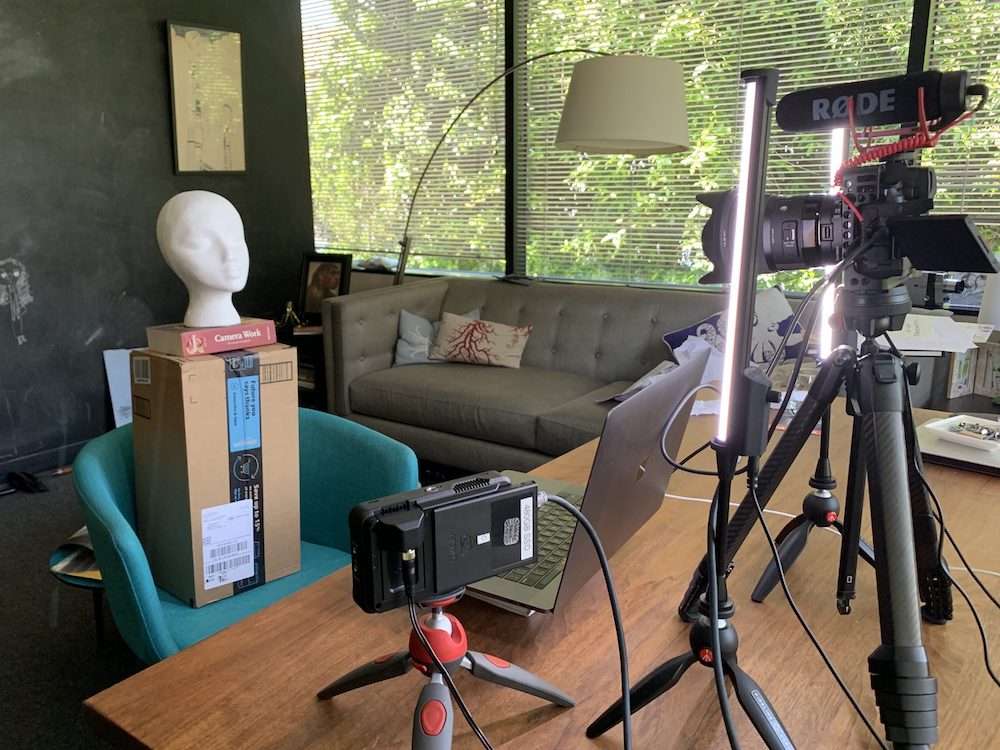 Priorities for a new workflow

His goal shifted to developing a new remote workflow and putting together 5 production kits, each in a single case weighing 32 pounds. One would go to Jordan Hembrough in New Jersey, who is also a producer and lines up many of the subjects for the stories. The other 4 would go out to the various interviewees who would each have to set up their own gear, soup to nuts: position the camera, lighting, and telecommunicate with Griswold and the rest of the team. Fortunately, Griswold had plenty of remote shooting resourcefulness to make up for the lack of in-person crew.

Lighting was a good place to start. A self-professed gearhead, Griswold has been using BB&S’ Area 48 LED softlight for years and experienced the colour accuracy of the Remote Phosphor design. “I had worked with the lights before and knew that since there would be lots of other variables knowing that I could trust the colour of their output was a good start for me,” Griswold explains, “The key is the most important thing. If you know that the key is an exact colour you can build the rest around that. You don’t want your person to go green or pink.” 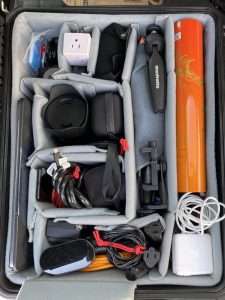 The snugly packed kit fit in one standard case

This time size mattered. Toby Sali at BB&S (www.bbslighting.com) encouraged him to try out their remote phosphor Pipeline Reporters and Griswold’s problem was solved. He chose 2 each of the 1’ Reporters per kit, on desktop stands. With an inline dimmer, they would keep it neat and simple to adjust while looking cooler than most practicals that find their way into frame. Best of all, Griswold knew there would be no spikes, or green glow—he could count on the 97 TLC for colour rendering. He also added Pipeline Free versions without stands to go to the host’s home studio.

His criterion was that someone who didn’t know much about cameras or lighting could set it up. “It was a juggle between what’s best, compared to what’s simple,” he adds. He came up with a simple yet dynamic 2-camera position setup, one wide and one close. He would get on a Zoom and explain how to set it up complete with cables and lighting, test it, and eventually how to pack up into the case and ship back to him.

What was in the kit?

The participants would receive a snugly packed kit that had been fully sanitised at the Monkey Deux office. The first item they would pull out was a MacBook Pro laptop, preprogrammed with TeamViewer. That would get them online with step-by-step instructions led by Griswold. Next was the Canon EOS R camera that would always be set at “face detect autofocus” to avoid complications. Ditto with the Sigma 24mm prime lens. “Before going remote, I usually use cine prime lenses, but primes were even more important on this project,” says Griswold, “It cuts out the variables and the setups were at their desktops, so a prime made sense.” 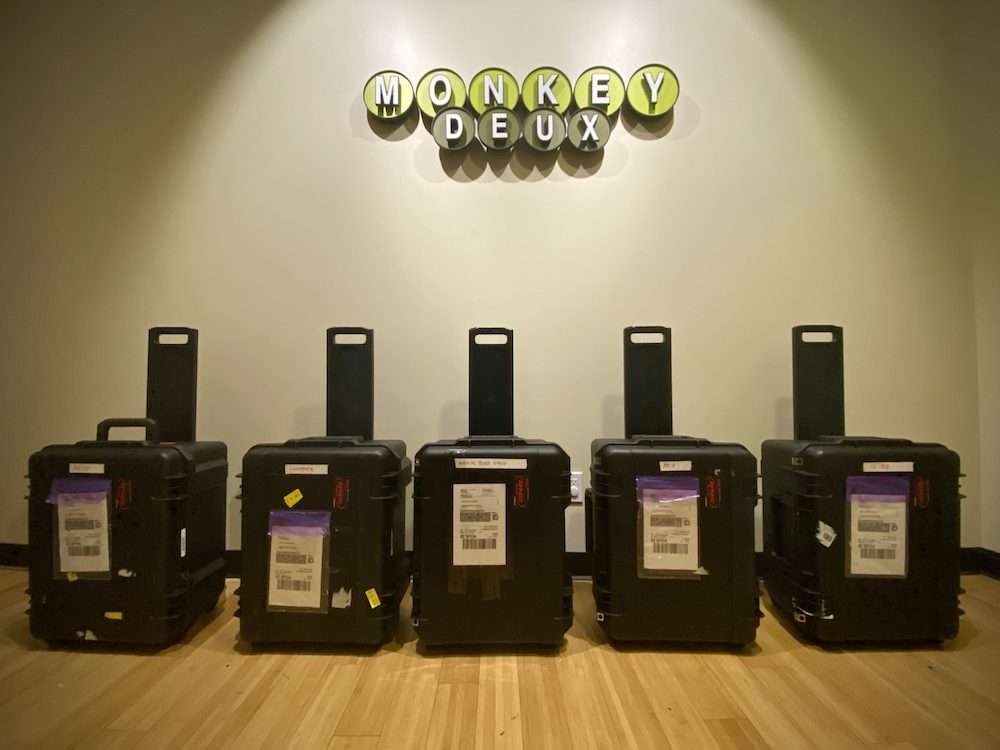 The second camera was an iPhone on a travel tripod that worked out fine for the over-the-shoulder shot of the interviewees. Griswold did the settings from his office. They recorded to Atomos Ninja due to its capacity to record in a 10-bit colour space.

Regarding the lighting, Griswold says, “With their simplicity, size and colour reliability the Reporter lights really helped me reduce the number of variables. What you see remotely is not super accurate. You need to trust and you need dimmers. With the Reporter it was easy to say: ‘take the light on the right up and dim the left down’. They are fun lights and look cool. When you are dealing with people who don’t do it for a living, the cool factor counts, and I’m officially over ring lights.”

Set up and Go

Set up took between 1 and 2 hours each. Griswold says he “helped set up in my office with the subjects watching and setting up remotely.” John Harper, Lucasfilm producer overseeing production, would also weigh from his desk in northern California to tweak the lighting or the shot composition. “I have a whole new respect for people who do tech support,” adds Griswold. 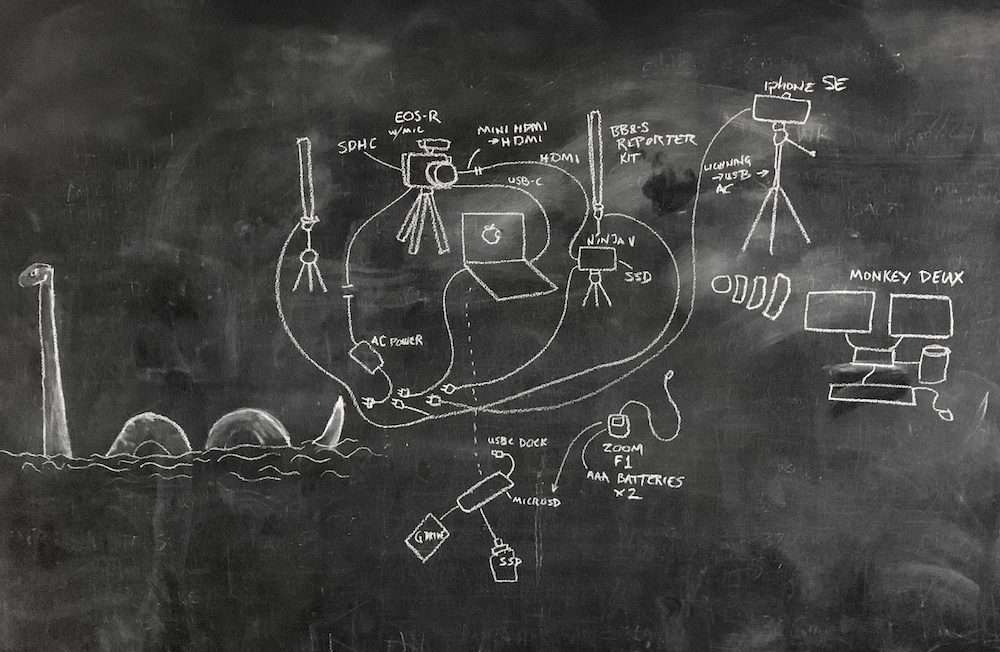 The following day they would do final adjustments and the actual interview. It was a busy time with a lot to monitor with the two remote cameras being operated simultaneously. During the interviews the Lucasfilm editor, Frank Knight, as well as producers Matt Martin, Dan Brooks, and Executive Producer Mickey Capoferri joined the Zoom and weighed in. Everyone was an integral part of the process.

Thankfully the participants were so excited about telling their stories that they enthusiastically participated. “My job was to make them look good and feel they are in good hands. One of the most rewarding parts was when we finished the setup and folks could see themselves well lit. The fact that they did it gave them a sense of accomplishment. They were grateful to have been selected to be a part of the series. I think we all had a good feeling of satisfaction,” concludes Griswold. Our Star War Stories is currently available at https://www.starwars.com/our-star-wars-stories