Well-known for his beautiful imagery and versatility, cinematographer Matthew Libatique ASC has long been the go-to DP for several of Hollywood’s top directors. 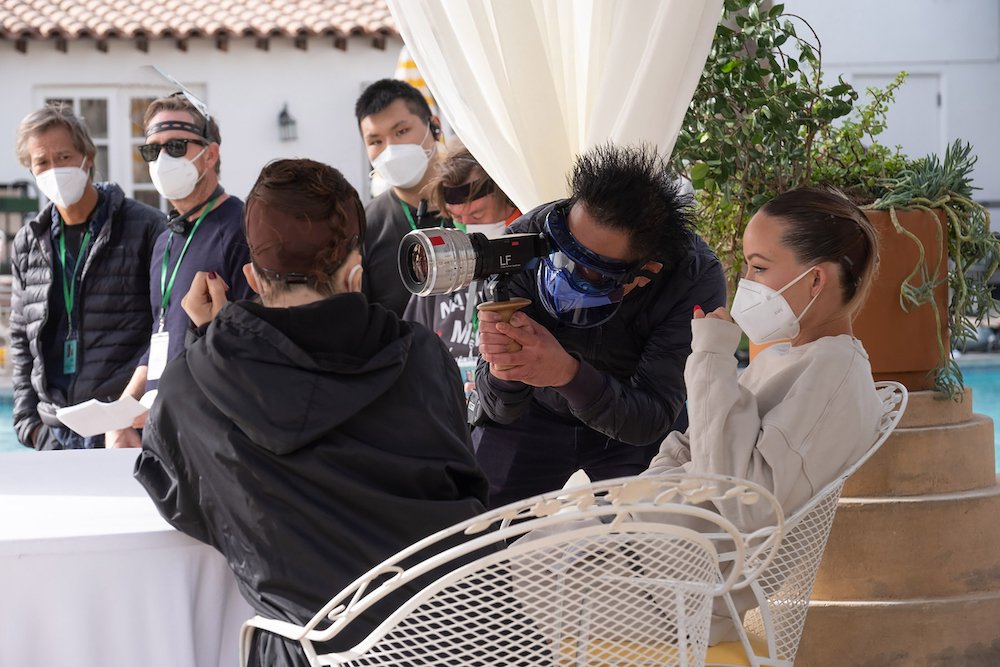 The DP won a second Oscar nomination for his work on Bradley Cooper’s directorial debut, A Star Is Born (2018), and is currently in production on Cooper’s Maestro after shooting the upcoming drama The Whale (2022) for Aronofsky.

His latest film is the psychological thriller, Don’t Worry Darling, directed by Olivia Wilde and starring Florence Pugh, Wilde, Chris Pine, Harry Styles, Nick Kroll and Gemma Chan. It tells the story of a 1950’s housewife, Alice (Pugh) and her husband Jack (Styles), who live in the idealised community of Victory, an experimental company town housing the men who work for the top-secret Victory Project and their families. The 1950’s societal optimism espoused by their CEO, Frank (Pine) – equal parts corporate visionary and motivational life coach – anchors every aspect of daily life in the tight-knit desert utopia.

While the husbands spend every day inside the Victory Project Headquarters, their wives spend their time enjoying the beauty, luxury and debauchery of their community. To all intents and purposes, life is perfect, with every resident’s needs met by the company. All they ask in return is discretion and unquestioning commitment to the Victory cause. But when cracks in their idyllic lifestyle begin to appear, flashes of something much more sinister lurking beneath the attractive façade begin to emerge. 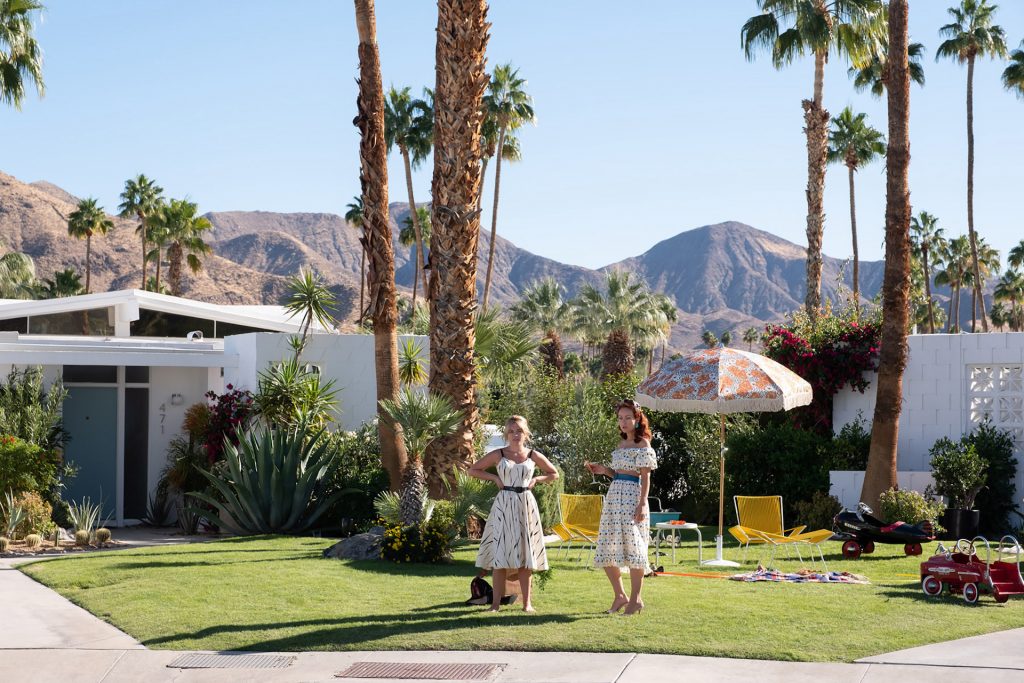 Here Libatique talks about the about the challenges of the shoot and his approaches to the cinematography and lighting.

This is your second project with Olivia Wilde after shooting her short, Wake Up (2020) which premiered at the 2020 Sundance Film Festival. Tell us about collaborating with her and how you got started on this film?

I came on a bit late to Don’t Worry Darling as originally I’d been unavailable prepping another film, which ended-up being shut down. Olivia called me and told me there’d been some changes at her end and with the film, so I ended-up coming on-board. 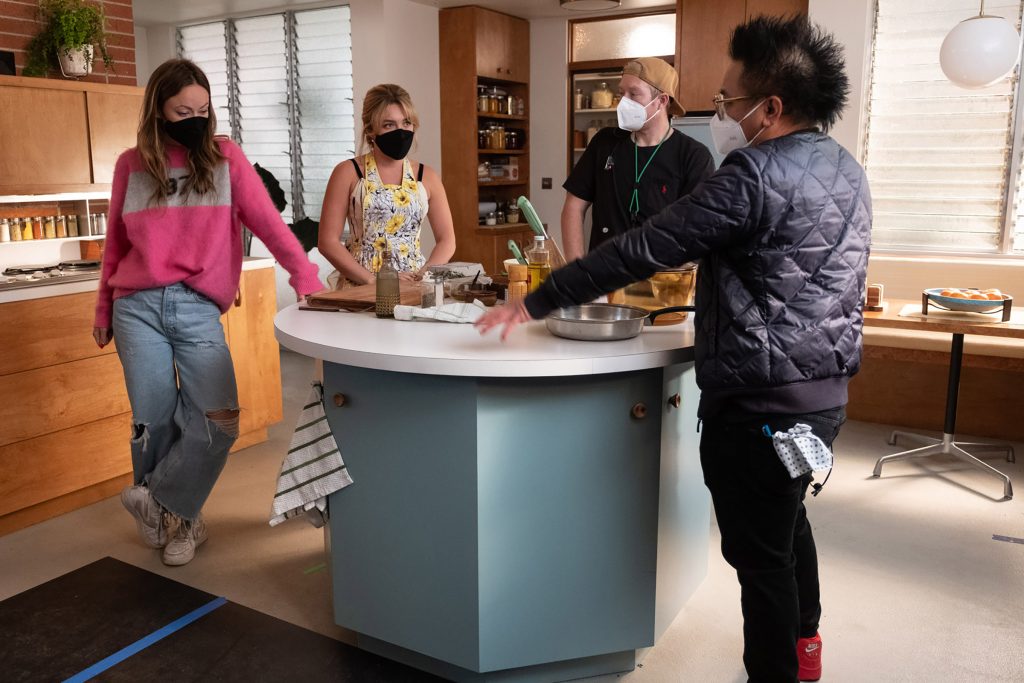 We’d first discussed Don’t Worry Darling during the Wake Up shoot, and it sounded really intriguing. When we first met about the film at her office, she had an entire wall of photos and references for it. That was really helpful, and we talked about inspirations and the film’s themes of patriarchy, gaslighting and a woman descending into madness.

All of that informed some of the visuals that we put in front of the camera. That was the foundational aspect of it. Then slowly-but-surely we began to construct a more practical language for the camera and the light. 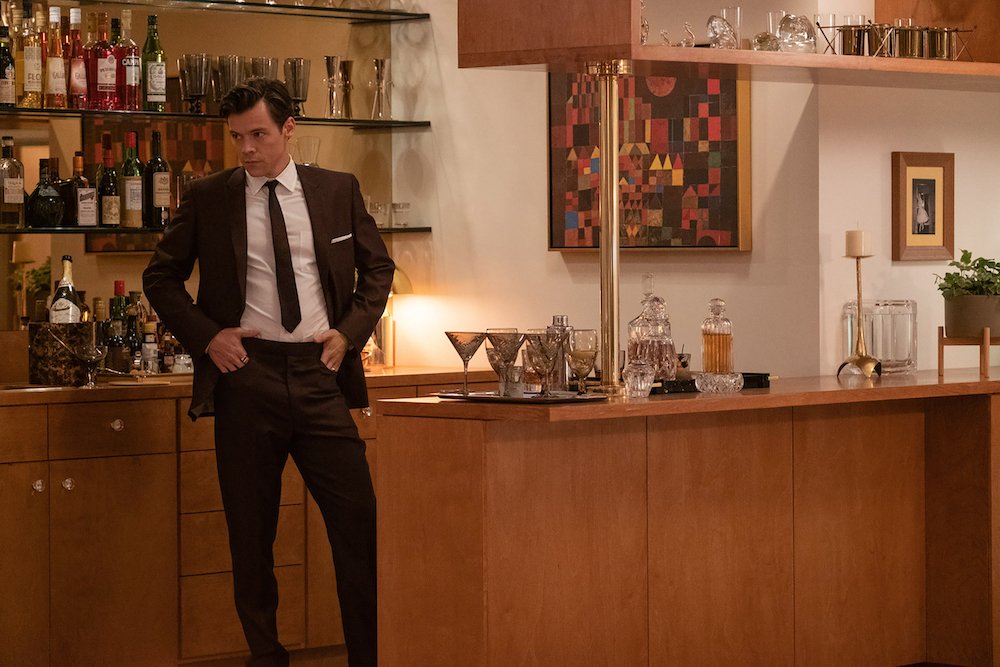 Please give us a few details about your prep period?

It was just five or six weeks for me, because of Covid and coming on late. So it was a race to get up to speed. But, Olivia has such an ease about articulating her vision, that that whole side of things went very smoothly. As it was a fairly low-budget production, the main thing was to figure out how much could we accomplish with what money we had. 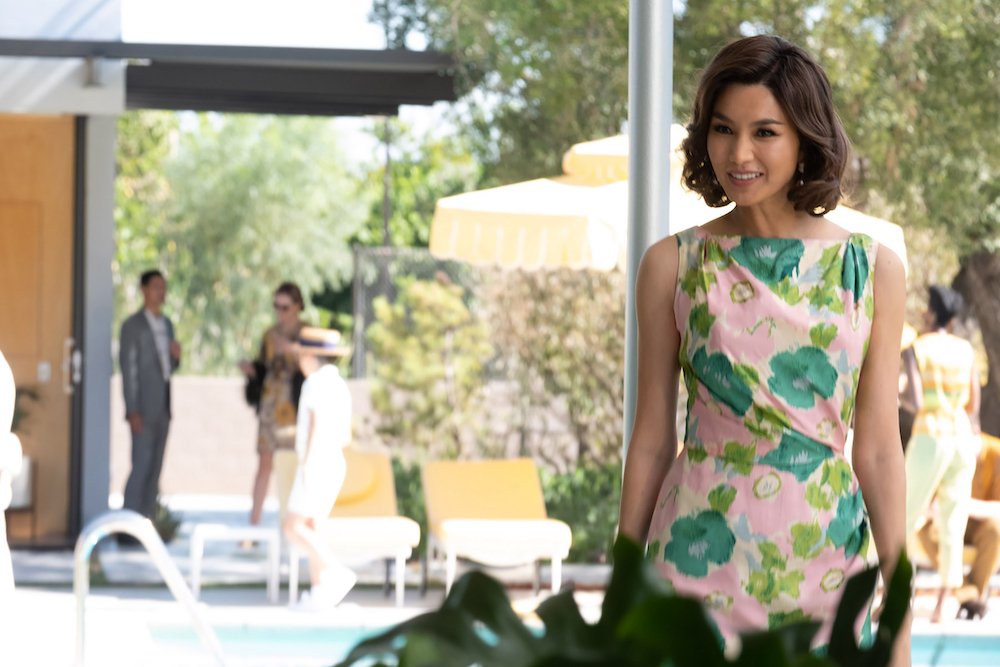 How did you arrive at your camera and lens choices?

We shot digitally with the ARRI Alexa Mini LF, and we shot spherically with the binary Blackwing lenses. Previously, I’d been shooting a lot of Anamorphic, but this just felt like a spherical film. Even though we shot in 2.40:1 aspect ratio, we shot a lot in Palm Springs, where there are a lot of verticals with all the palm trees, and I wanted to keep that element, but without the bend.

I mixed in a few Sigma Classics in different bits of the film, but a good 90-percent of the film was shot with the Blackwing lenses, manufactured by Neil Fanthom and Bradford Young’s Tribe7 company. They introduced me to them a year or so before I shot this film, and I used them on Wake Up, but I was waiting for a chance to use the Blackwing lenses on a longform project, and this was the perfect opportunity. 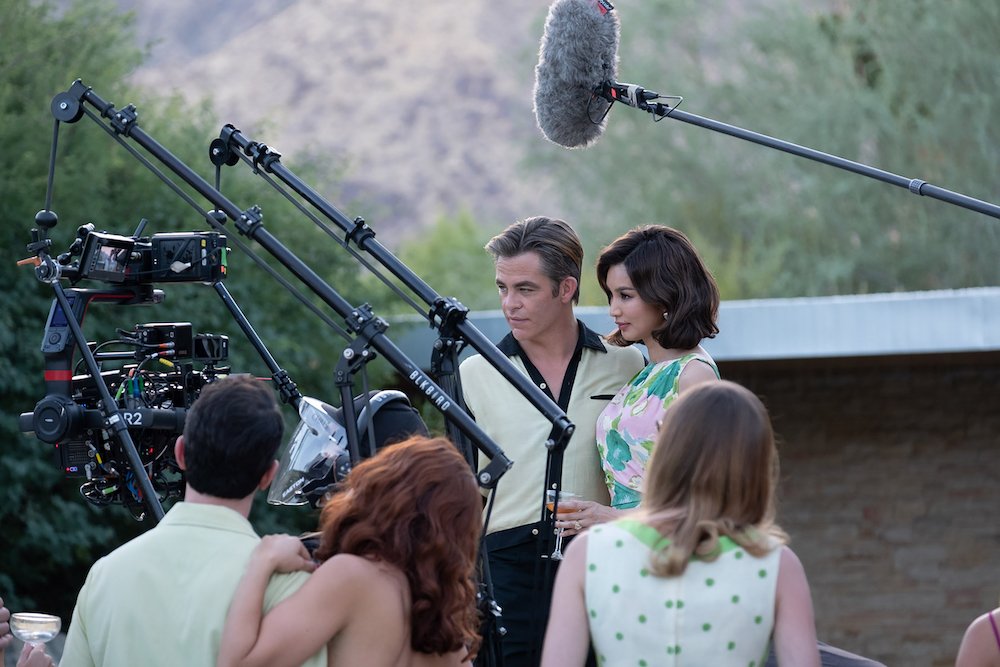 How did you approach the look of the movie and the technical challenges?

Once I get into prep, one of the things I always like to do is talk to the other key collaborators. So I met with Katie Byron, our production designer, and Arianne Phillips, our costume designer, to absorb the palette. It was so highly-stylised already that I didn’t necessarily want to put gloss on top of gloss. The thing is, it’s a film about a fictitious world, but you don’t know that going in, and you’re not meant to. So I wanted the lenses and lighting to be as natural as possible.

“I was waiting for a chance to use the Blackwing lenses on a longform project, and this was the perfect opportunity”

When I tested the binary Blackwing lenses they rendered a less shiny look, but with the potential for some imperfection that I was looking for, which juxtaposed nicely with the highly-stylised look from the other departments – production and costume design. I think it helped to establish a world that, at least at the start, felt like the real world. 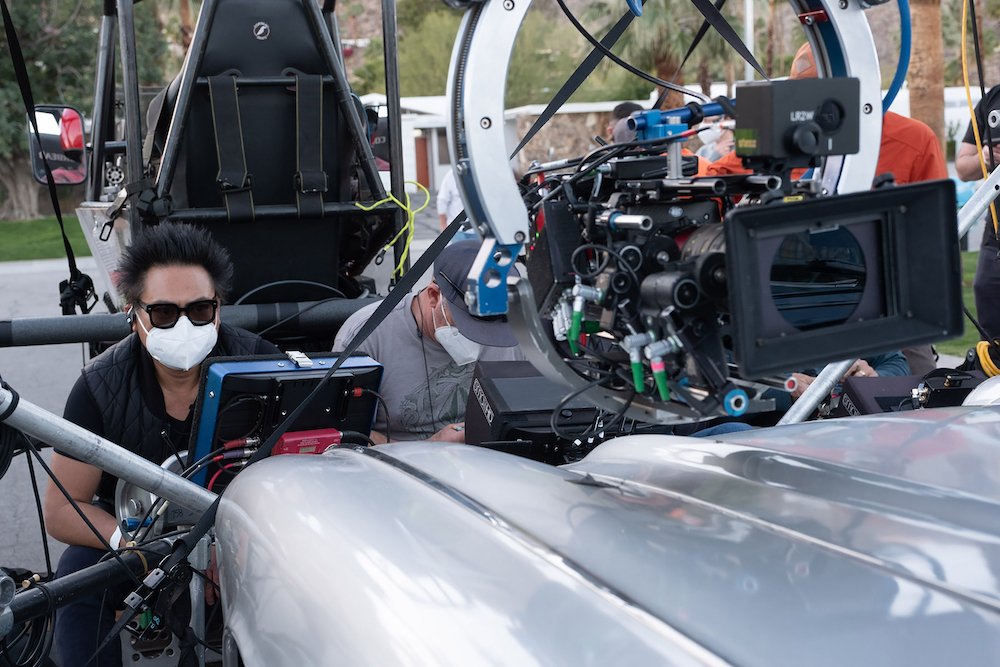 The Blackwings have a very distinctive flare and they’re specially-designed to pull away from some of the sharpness of other lenses and take the edge off the digital image. They’re a bit lower contrast than a Zeiss Supreme or Master Prime. We also used the DJI Ronin 2 with AntigravityCam and GLINK high-end gimbal body support systems quite a lot, along with Allan Padelford’s drivable Biscuit Rig process trailer and an Arm Car Edge for the action sequences.

Did you work with a colourist to prepare any LUTs?

Yes, with Alex Bickell, and it was the most distinctive LUT I’ve ever worked on and was an on-going process. I shot some very early tests with swatches from Arianne, and we put fabrics in different lights to see how the colours rendered. We shot three different tests to develop the LUT, and also referred to a lot of the images on Olivia’s wall. I then augmented the LUT a couple of times, as later in the film you’re introduced to the actual reality of the situation, and I also used an old LUT for the Victory scenes to distinguish them from the rest. 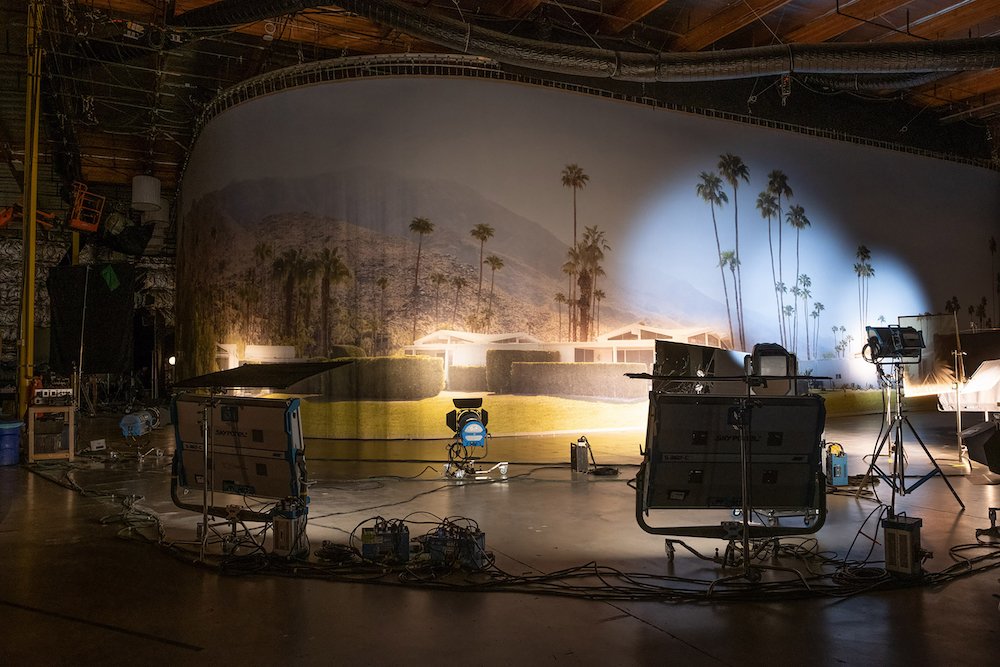 Tell us about the shoot. How tough was it?

It was just 45 days, so it was a pretty tight schedule, but I’m really proud of just how successful the main house interior was as a set built on a stage in Santa Clarita. We shot a lot there and did two stints in Palm Springs. We also shot the finale in Barstow, including at a dry lake-bed there. I had a great crew, including gaffer Jeff Ferrero and DIT Mike Kowalczyk. The A-camera operator was Scott Sakamoto and the B-camera operator was Chris Herr.

How did you approach the lighting?

I wanted as much naturalism as possible with the lighting, and to pair it with the wardrobe, hair and make-up. The design was to keep it all as real-looking as we could.

“We shot in Palm Springs at the best time of year for cinematography… winter! I could take advantage of the low angle of sunlight, and maximise the shadows”

Interestingly enough, the exterior of the house was a real location in Palm Springs, and I basically followed the path of the sun for the interior on stage, because we were building-up to the grand finale where Alice makes her escape. I knew exactly where I wanted the sun to be at that point, so we built towards that. 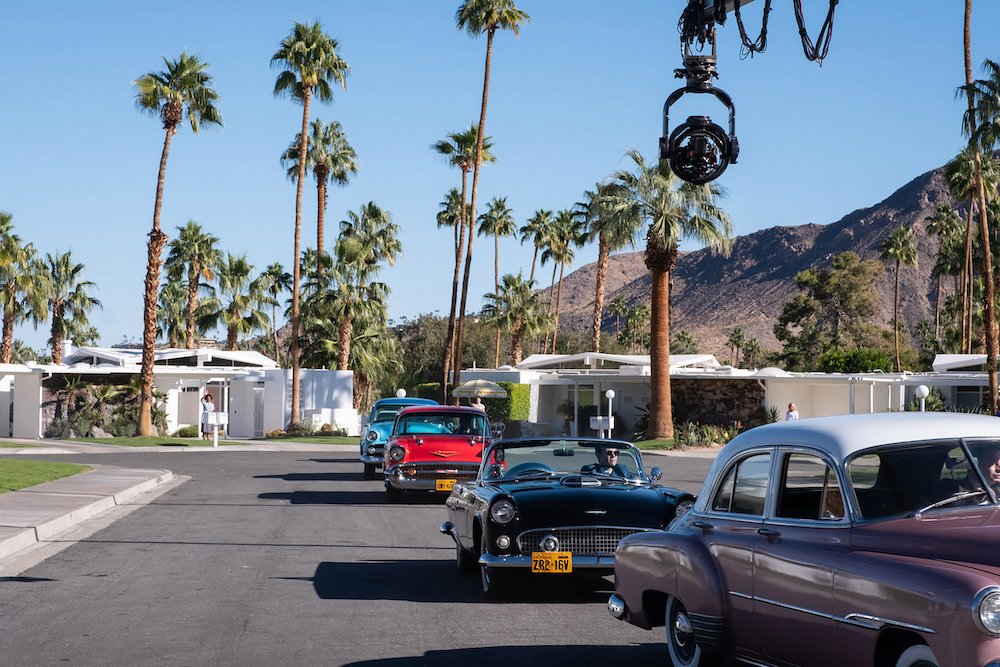 The movement of the light on that interior is actually mimicking what’s happening on the exterior, and we had the benefit of shooting in Palm Springs at the best time of year for cinematography… winter! The days were short, but it was well worth it. I could take advantage of the low angle of sunlight and really maximise all the shadows.

In the edit they were able to really use and maximise the imagery of the women in sunlight and the men in the shadows. I used Mole Richardson Solarspot 20Ks for the sunlight. Our lighting package also included LiteGear LiteMat panels, ARRI SkyPanels, Astera LEDs and Mole Baby Senior Solarspot 5Ks.

How involved were you with all the VFX?

I was quite involved aesthetically with the VFX. The film has a fair amount of blue and greenscreen work so we could tie all the real exterior locations to the set-built interiors, and then we had visual effects for all the flashbacks that had to fit in with some of the themes. 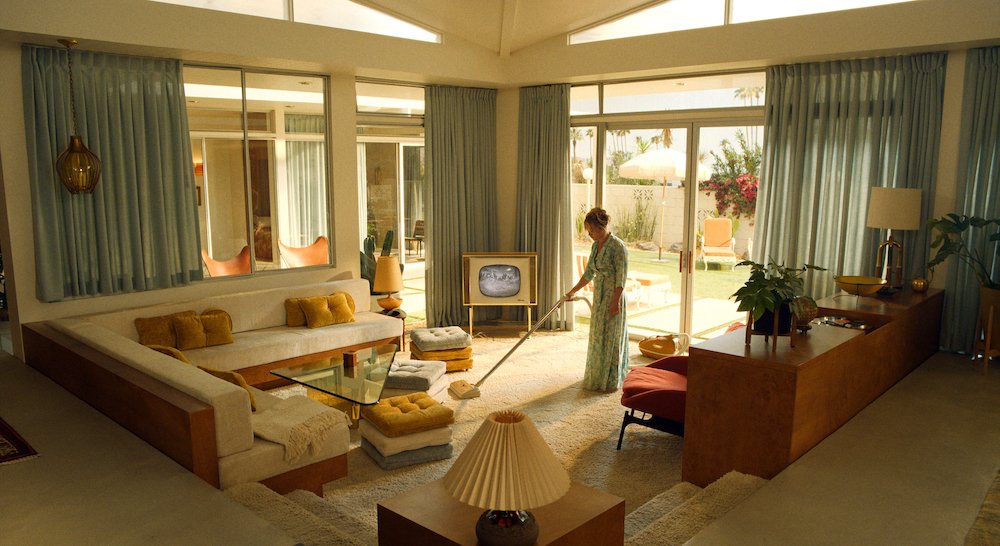 When you see the film there’s this circular shape that enters right at the start in the very first scene, where Alice and Jack are going for a joyride and doing doughnuts in the car. Then you see the eye and Busby Berkeley choreography in the flashback and you see the coffee in the morning montages, all the same size in the frame. And that visual theme of circles leads up to the reveal in the third act where you see what’s actually happening to Alice with her eye.

What was the hardest scene to shoot?

You’d think it was the action scenes at the end of the film, but it was relatively easy to construct shots for those. The hardest scene to shoot was the big Victory party sequence, because it was shot at a beautiful old location and the problems we had in lighting it were not inconsiderable, as any director wants to see the ceiling. You can’t just use the usual rig, so my lighting team worked with our fantastic art department to create a design piece that allowed us to put light panels on the second-floor balcony behind translucent Art Deco pieces that lit the balcony.

What about the DI?

Alex and I did it at the old Technicolor PostWorks room in Leroy Street in New York. I’ve done a lot of films there, and we spent about ten days on the colour timing. As the LUT was so specific, and the lighting was tuned to the LUT, we were basically just balancing the film the whole time. Olivia was busy in the final mix, so she’d drop in at the end of every day to review.

Did it turn out way you hoped?

Even better, given our budget. I think we achieved a lot more than I expected going in, to be honest, and I’m really happy with the way it looks.