Lighting the dark side of the moon – Moonfall

Director Roland Emmerich is no stranger to putting earth-shattering events on screen. The director of Independence Day, The Day After Tomorrow and 2012 returns with another blockbuster disaster movie in which the moon itself is sent hurtling on a collision course to Earth with catastrophic consequences for life as we know it.

Moonfall‘s director of photography is no stranger to state-of-the-art action movies either. With experience gained over three decades working on films like, Indiana Jones And The Kingdom of the Crystal Skull, The Hunger Games and Ant-Man And The Wasp, Robby Baumgartner was additional photographer for Emmerich on Independence Day: Resurgence and cinematographer for the director’s period war epic Midway.

“I’ve worked on a number of large-scale movies with the scope of Moonfall and I knew that Roland and I would form a great team,” he says.

Selecting Red cameras to shoot the $140 million sci-fi epic was an easy and early decision stemming from successful experiences with Red Epic Dragon on Independence Day: Resurgence and with the Red Monstro sensor on Midway.

“We both wanted the Red Monstro VistaVision chip, and there was no need to test it,” Baumgartner says. “Firstly, this was clearly a movie with a lot of action-driven VFX, so having an 8K platform shooting 5:1 Redcode Raw would make it easier for VFX to rotoscope and build VFX starting from a higher per-pixel resolution.”

“Also, Roland loved our use of large-format lenses combined with Monstro 8K VV on Midway and wanted to repeat that sense of scale,” notes Baumgartner. “This time I paired the Monstro with a full set of ARRI DNA Primes. We typically carried three bodies with one setup for Steadicam and the other two for handheld, dolly or crane. We also had a Red Ranger, which is the first time I’ve used this camera. It’s a fantastic platform – I was very impressed.” 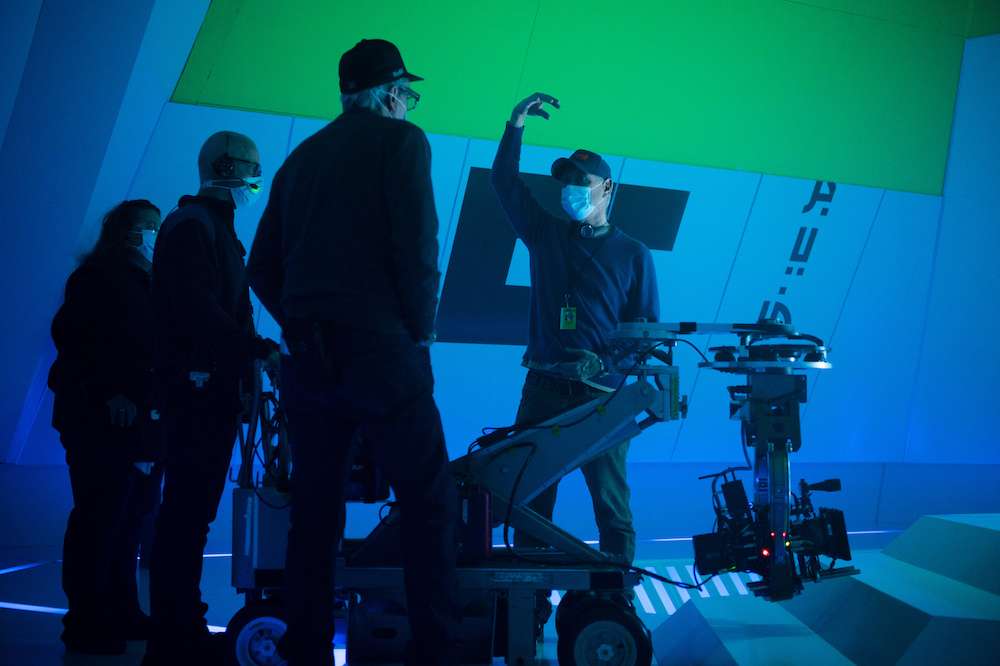 The Lionsgate release stars Halle Berry and Patrick Wilson as astronauts and John Bradley as a conspiracy theorist as unlikely heroes uniting to mount a last-ditch mission into space, only to find out that our moon is not what we think it is.

“Roland’s big concern was the scope of the interactive lighting,” explains Baumgartner. “With a lot of big set pieces and scenes being shot on huge stages in Montreal against 360-degree blue screen, we knew we had to carefully balance the practical lighting of our actors with the virtual lighting from elements like the moon crashing into earth, asteroids, explosions and lots of fireworks. The tricky part with interactive lighting is achieving the right balance that works for VFX.”

One scene had the characters walking at night in the mountains of Colorado while meteors rained down. Baumgartner and his team were tasked with creating the interactive lighting of multiple meteor fireballs traveling the entire length of a 200 ft stage. The quality, colour, intensity, speed and timing of these effects had to be coordinated with the action of actors and match what VFX was going to build in post. It was a daunting challenge. 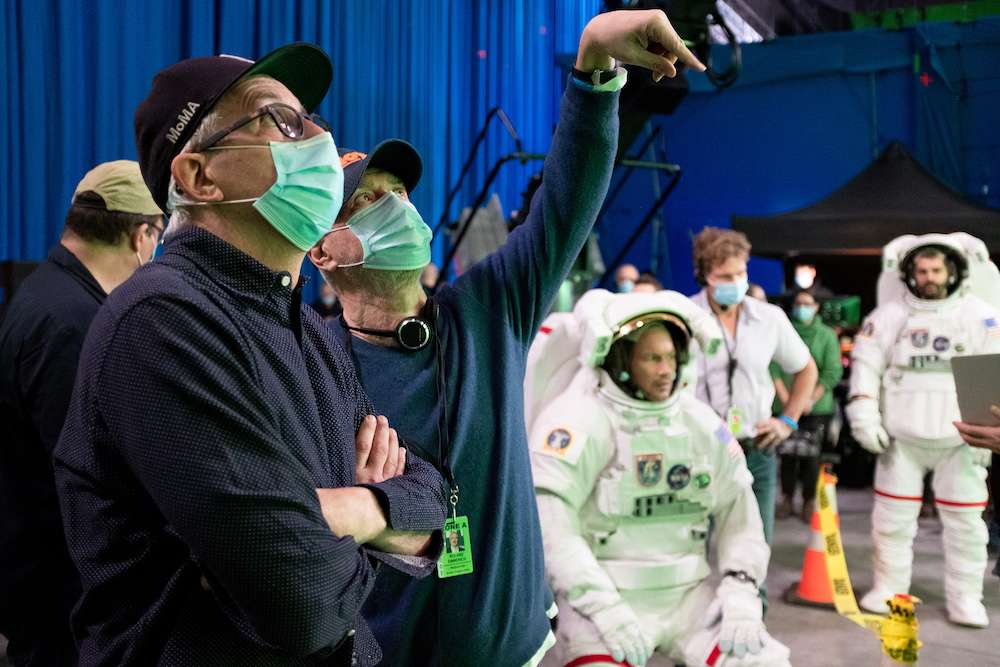 “LEDs give you full RGB+W capability and wireless control which you don’t get with tungsten or conventional theatrical light, but we needed a variety of sources to make this work,” he says. “We rigged the whole length of the stage with Par Cans (more familiar for use in lighting rock concerts), and instead of moving the fixtures, which would have gotten too complex and expensive to rig, we chased the lights to give the illusion of traveling objects.”

“The Par Cans were our hard sources that we rigged on either side to create sharp moving shadows, and we added into the mix ARRI Skypanels rigged in an array overhead to give us a softer ambient light source. Both sources were in sync to chase the length of the stage.”

“The combination of new and old lighting fixtures was a very effective interactive lighting source that mimicked meteors streaking across the sky. Add on to that the effects of numerous explosions as they crashed into the ground, and you can imagine my crew and I had our hands full!”

The laws of physics

The DP said he worked closely with Pete Travers, the VFX supervisor, who compiled astronomy images from NASA and researched the laws of light in physics to anchor the film’s design to reality. “We started from the basis of what the actual physics would be and worked out how that would change given the scenarios presented in the film. As the moon gets closer and closer to the Earth then it would naturally look bigger but its colour would change too, the closer it got to the earth’s atmosphere.”

“In testing we found a range of colour temperatures that were based on the physics of a rising near-Earth moon around 2400K to a direct overhead moon at 5700K, but for our purposes I felt we needed to go a bit bluer overall on the night scenes so screw the physics!”

They ramped up the kelvin in the night scenes to a range of 6500-8000K. On the other hand, scenes set inside the moon presented “a whole other world we could create.”

“It’s an alien world to which we added a bit of green to the baseline steely blue,” Baumgartner says. “For one particular scene inside of a chamber we went for a deep blue and Roland really loved it.” 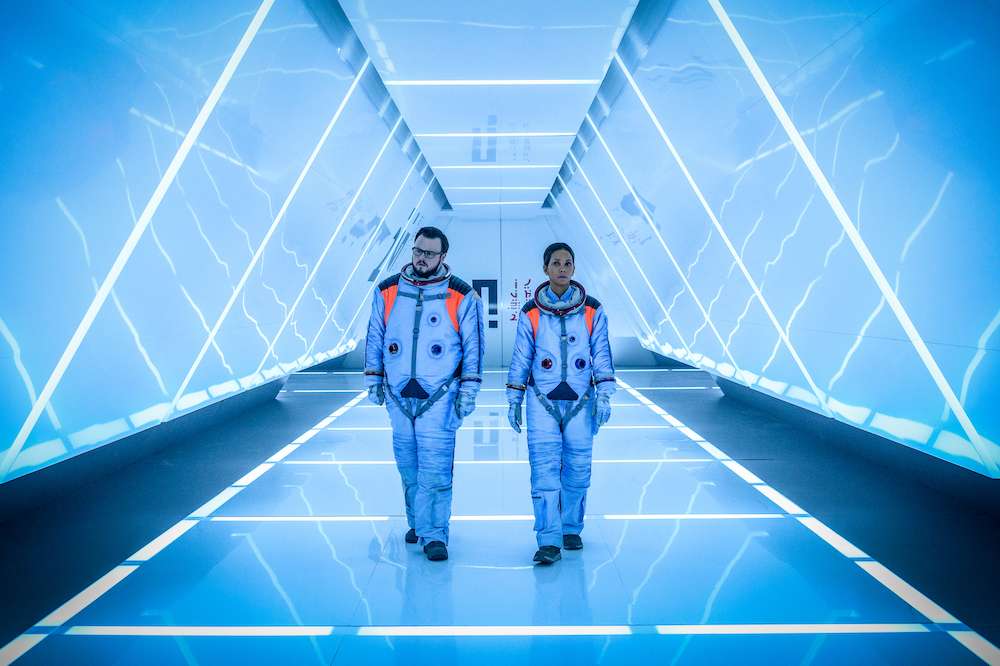 This element of photography was crucial to informing VFX about the correct colour palette. “VFX used the same LUT and colour temps that we used on set,” he adds. “All the plates were applied with the same calibration as well, so we all came to the same place at the same time.””

“The biggest compliment was when we came to colour timing and Walter Volpatto, senior colourist at Company 3, told me it was phenomenal that live action, plates and VFX all virtually matched in the same range.”

“A big plus with Red is that the colour space is fantastic. You can be really accurate making creative decisions and confident that those decisions are going to be consistent throughout the DI.”

“This was the most complex interactive lighting I’ve had to do in my career and being able to pull it off with our team of grips, electric, camera and VFX was incredibly satisfying,” adds Baumgartner.