The course of true love never did run smooth. Filmed on KODAK 35mm, and described as an exquisitely-crafted, nostalgic-hallucination, Licorice Pizza is the fictional story about Gary Valentine, a precocious, entrepreneurial high-schooler, and his unconquerable crush on the older Alana Kane.

Set in 1973, the comedic, coming-of-age comedy drama, tracks the haphazard course of first love, as Gary and Alana grow-up and run around the San Fernando Valley area of Los Angeles together, experiencing a variety of colourful, madcap and enlightening escapades. The acclaimed feature was written and directed by Paul Thomas Anderson (PTA), with Anderson and Michael Bauman, perhaps best-known as an industry-leading gaffer, sharing the director of photography credit on the movie, with Colin Anderson collaborating as camera operator. 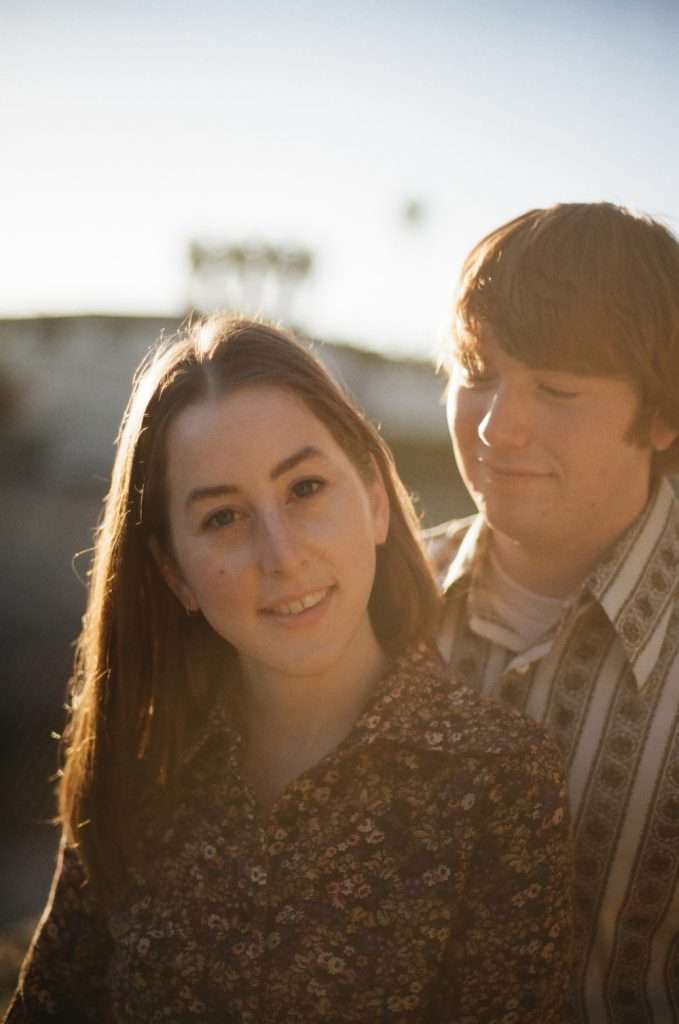 After its general release on December 25th 2021, Licorice Pizza received high praise from critics and garnered three awards from the National Board Of Review, including Best Film. It was also named one of the best films of 2021 by the American Film Institute, received four nominations at the 79th Golden Globe Awards, and looks set to attract further accolades in the 2022 awards season.

“PTA tests like crazy… to get to the look he wants”

“PTA and I spent a lot of time, perhaps the best part of a year, working out the particular cocktail recipe for the visual language of this movie,” says Bauman, who has been the gaffer on more that 40 celluloid-originated movies, including Anderson’s The Master (2012) and Inherent Vice (2014). He previously worked as the lighting cameraman in the collaborative cinematographic effort on Anderson’s multiple award-winning Phantom Thread (2017), also shot on KODAK 35mm film.

“Before any production, PTA tests like crazy – at locations, with the actors, with different filmstocks, exposures, lenses and lighting set-ups – all to get to the look he wants, and it was no different on this production in order to create an authentic evocation of the 1970s.” 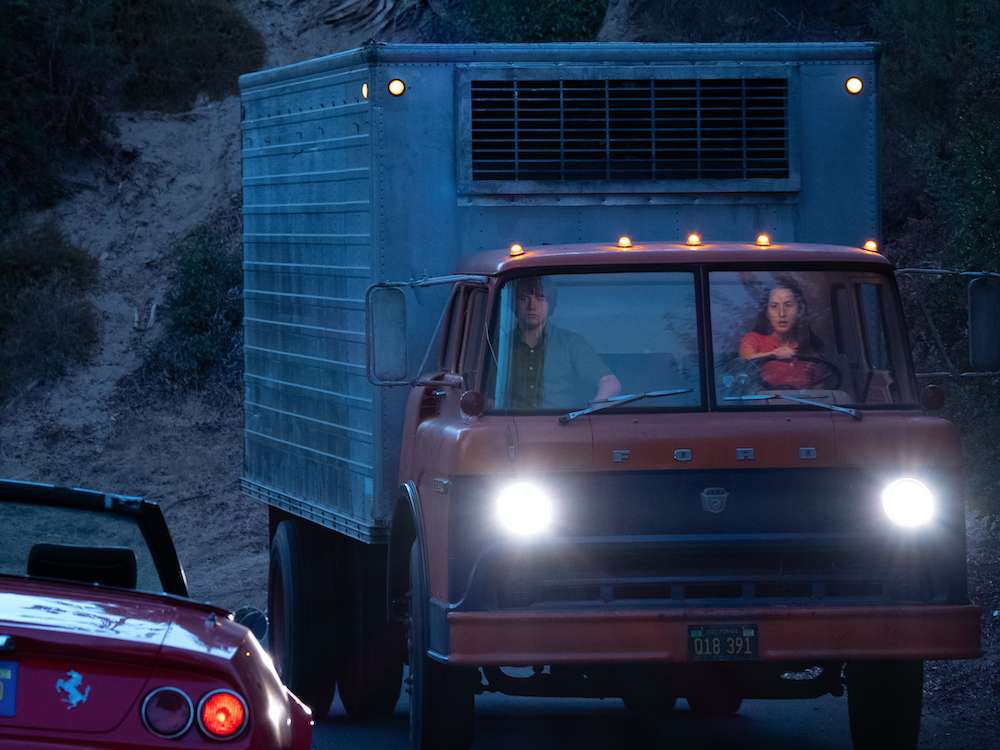 Filming on Licorice Pizza took place over 68 days, starting in August 2020 and wrapping in November, at locations chiefly around the west San Fernando Valley, in an area roughly bounded by the 405, 170 and 101 freeways. These included Encino, Van Nuys, Canoga Park and Woodland Hills. The Tail O’ The Cock, a famed local restaurant that was demolished in 1987, was recreated for the film at Van Nuys Golf Course, where the movie’s motor cycle stunt sequence was also filmed.

“PTA grew-up in this part of Los Angeles, and I remember cycling around those areas with him during a CycLAvia event way before we shot the movie,” Bauman recollects. “It was clear he had a deep connection to those places. He knew aesthetically what he was looking for, and they played a fundamentally important role in the visual storytelling.” 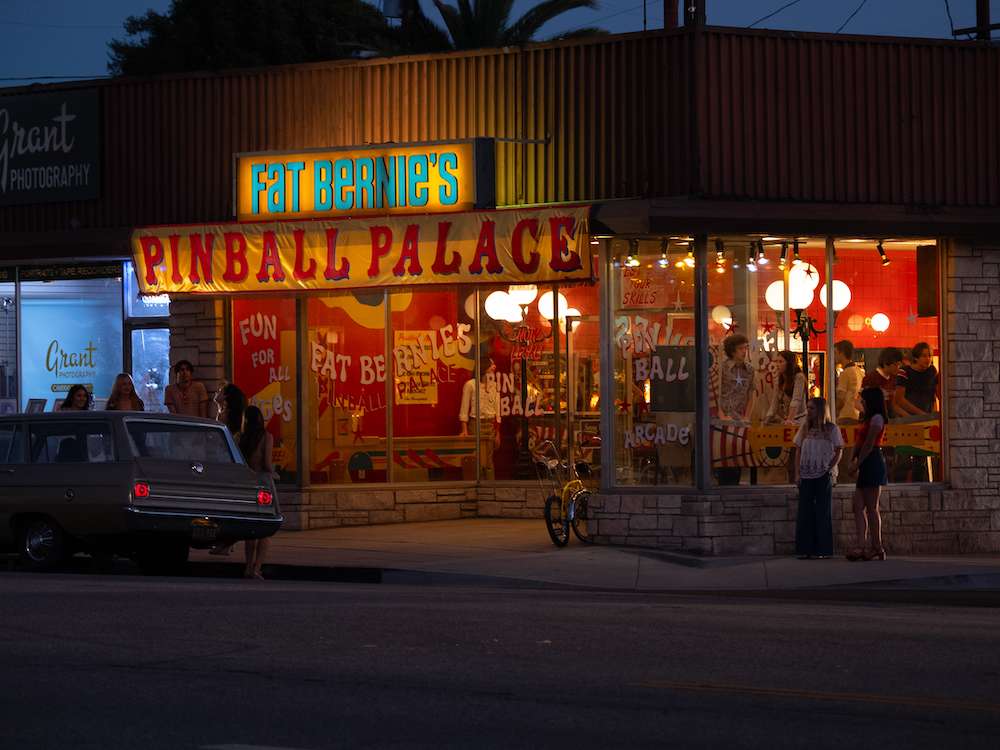 “PTA has a screening-room at his house, where he can project 35mm and 70mm movie film prints,” Bauman recalls. “During prep, looking at film prints is a critical step in the process of creating the look, and he asked me over to view a couple movies as reference points. We watched American Graffiti and Manhattan multiple times, and considered them as much for their filmic texture, lensing and widescreen framing styles, as we did for how they were lit… or not lit actually, because neither of them had very much money.

“For example, Woody Allen’s classic, Manhattan, has a walk-and-talk at night, for which the DP, Gordon Willis ASC, used something like a SunGun over the camera to illuminate the actors, and went with whatever was going on in the background, like street lights and car headlights. So we embraced that style, that way of working, typically using a LiteGear LiteMat as the main source for our walk-and-talks, and letting the backgrounds be dark, all as part of our 70’s visual ingredients.” 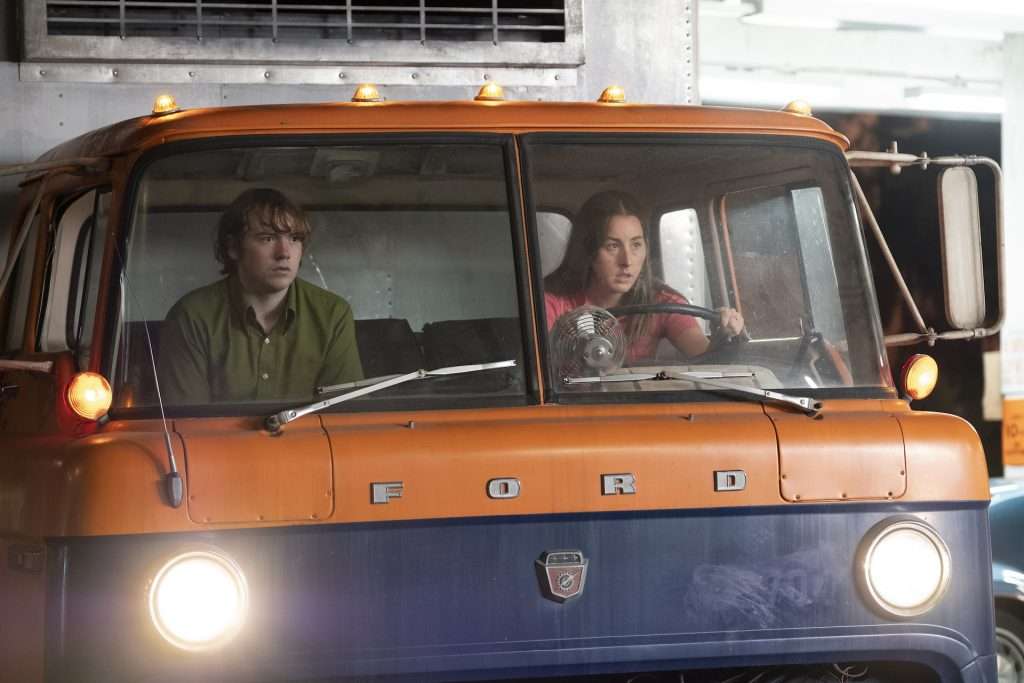 Digital capture was never an option for Anderson, who prefers to shoot and post-produce all of his features exclusively on film. Working with Panavision in Woodland Hills, California, Bauman and Anderson settled on shooting with the same pair of Panavision Millennium XL2 35mm film cameras as used on the JJ Abrams-directed Star Wars Episode VII: The Force Awakens. At the behest of that film’s DP, Dan Mindel ASC BSC, the cameras were specially-decorated in matte black and individually engraved with the monikers ‘Millennium Falcon’ and ‘Death Star’.

Lenses were another crucial item in creating the period aesthetic Anderson was going for. As Bauman explains, “In the digital world where everything is about super-clean, 4K images, and getting as much information and resolution on the screen as you can, PTA likes to use lenses and film processing to degrade the image, so it has texture and delivers a connection to the audience. That’s where a lot of our decisions about the lensing came from.”

This saw the director working closely with Panavision vice president of optical engineering, Dan Sasaki, on the choice of glass.

“Dan is the foremost lens master on the planet,” says Bauman. “He and PTA have a really good working relationship. We shot Licorice Pizza primarily with old-school Panavision C-series Anamorphics from the ‘60s and ‘70s, which bring nice contrast, fall-off and aberrations to the image, as well as the characteristic blue flare that you can see in shots such as in our golf course motor-cycle stunt scene.

“However, Paul owns his own lenses, such as an old 50mm Pathé and other vintage spherical glass, and depending on the movie, and format we shoot, Dan will convert them from spherical to Anamorphic. On this film, Dan also came to the party with a bunch of other, ‘Frankenstein’ lenses, that he had made up himself.

“So we ended-up with two or three versions of the same focal lengths and would see how they responded to the light, their flaring and bokeh characteristics, at any given moment, before PTA decided on-set which one to use.

“A good example, is the sequence when Gary and Alana go to see Mrs Grady, the talent agent. The vintage glass we used on Mrs Grady’s close-ups gave such a beautiful soft flare and bloom to the image that really supported the period look-and-feel.”

Bauman also notes, “When it came to choosing lenses or camera positions, it was very much a collaborative decision between PTA, myself and Colin, our world class camera operator. PTA typically puts a stake in the ground, shares his opinions about what he wants, and we build off that idea.”

“There is a unique quality to the overall celluloid image… that helps you evoke a period in time.”

“I love shooting on film for many reasons,” he says, “the first amongst those being the kind and realistic way it captures skin. Plus, there is a unique quality to the overall celluloid image – a patina and softness that is difficult to achieve in digital – that helps you evoke a period in time. 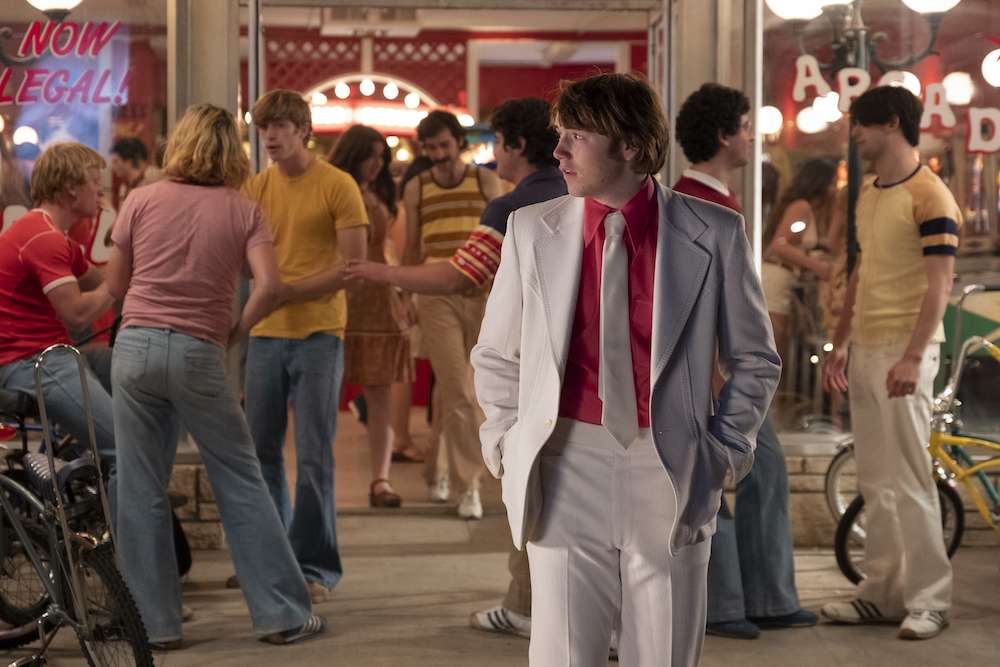 “I also like the process, the rhythm of ‘Lights… camera… action’ that comes with celluloid production. There are some good things about digital image capture, but one of the downsides of digital production is when the camera is just kept rolling and rolling. When you have four or 11 minutes of film in the magazine, people get really focussed on-set.”

Working under the auspices of post-production supervisor Erica Frauman, Fotokem did all of the negative processing and printing of film dailies, as well as the celluloid deliverables for the eventual film neg-cut and photochemical finish on the movie.

“I like the rhythm of ‘Lights… camera… action’ that comes with celluloid production… and people get really focussed on-set.”

“Yes, we had the luxury of watching printed dailies,” Bauman remarks. “All selects were printed and the different heads of departments were invited to view them with PTA at projected screenings each day. Nowadays, its rare but wonderful to watch projected film dailies on a regular basis, but it’s part of PTA’s process in making sure the performances and aesthetics look on-point, and allows everyone to look at previous work with fresh eyes.”

While the lighting team, led by gaffer Justin Dickson, deployed modern LED fixtures, such as ARRI SkyPanels and LiteGear LiteMats and LiteTiles, Bauman reveals that, “Carbon arcs and incandescents were how they lit in movies in the ‘70s, and PTA was insistent we use them as much as we could to support our authentic ’70’s look, although it can be hard for find carbon arcs in working order.

“Fortunately, we tracked down the guy who had supplied carbon arcs to Once Upon A Time In Hollywood (dir. Quentin Tarantino, DP Robert Richardson ASC), and secured five units for this production. We used them as daylight boosters, to combat strong sun and shadows, and on the interiors. The quality of light they give is remarkable, especially on skin tones, and especially when recorded on to celluloid film.” 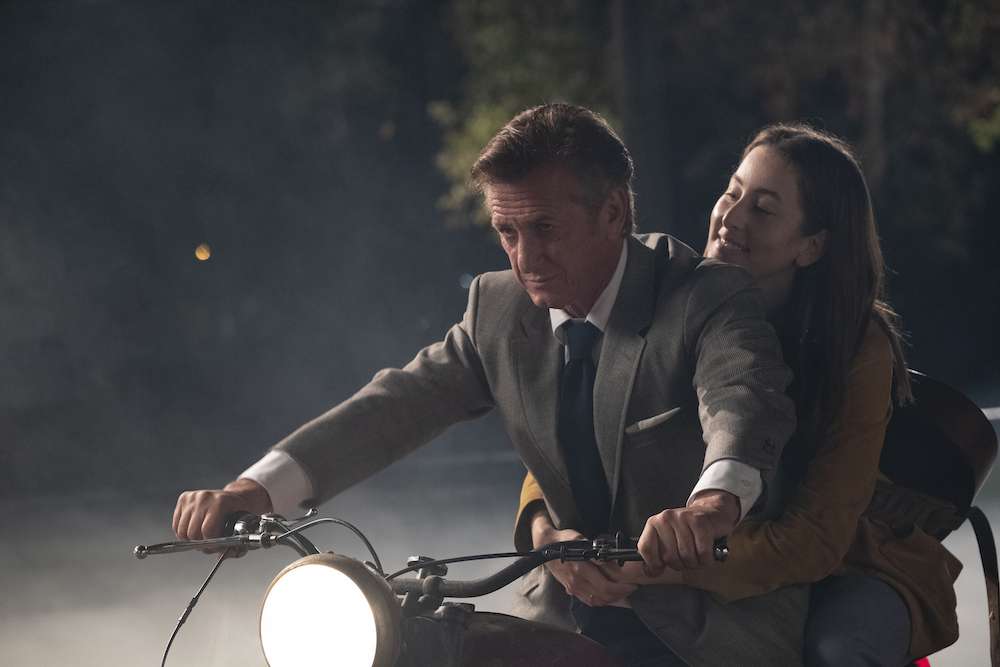 Bauman also divulges that he harnessed a lighting technique pioneered by DP Chris Menges BSC ASC, of using clusters of 50 or 60 15W incandescent bulbs, to deliver warm and glowing keylights.

“I learned of Chris’s technique when working with the late, great Haris Savides ASC,” says Bauman, “and I decide to used a heavy dose of these on our interior sequences, such as in the Tail O’ The Cock, to bring a real radiance to the restaurant scenes.”

Bauman concludes, “The thing about working with PTA is that his fingerprint is on every aspect of the movie. He’s involved head-to-toe in the whole thing, including the old-fashioned colour timing at the lab. How the final picture looks is all in his wheelhouse. It’s great to work with someone who has such a precise vision that threads through the entire picture, and the result looks great.”