Inspired by true events, director Gina Prince-Bythewood’s The Woman King follows the Agojie, the all-female group of warriors who protected the West African kingdom of Dahomey (now Benin) in the 19th century. Set in 1823, in the Abomey Palace and Quidah, one of the most active slave trading ports in all of Africa, the film stars Viola Davis as Nanisca, a general who trains a new generation of warriors to fight against an enemy wanting to destroy their way of life. The film also stars Thuso Mbedu, Lashana Lynch, Sheila Atim and John Boyega. 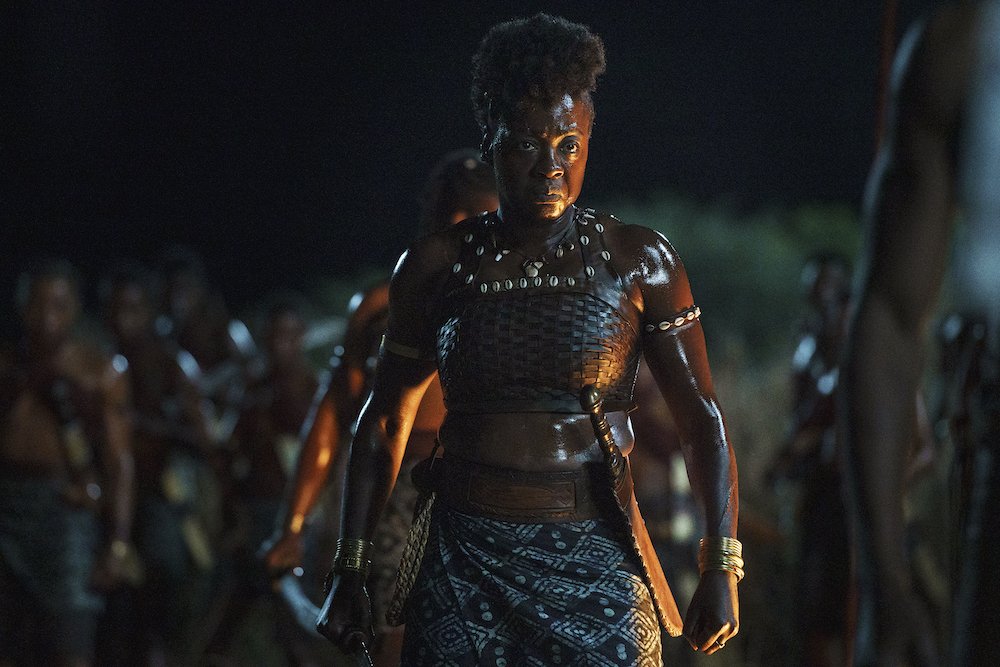 The screenplay for the $60m Sony production was written by Dana Stevens, based on a story she wrote with Maria Bello, with cinematographic duties under the auspices of Polly Morgan BSC ASC.

“I was working in Louisiana on Where The Crawdads Sing, when I received the script for The Woman King,” Morgan recalls. “I thought it was phenomenal in the way it mixed the power and vulnerability of the characters. Although it was ostensibly an epic period movie about a tribe of women warriors, with a lots of fighting and action, it dealt head-on with some very strong and unsavoury issues concerning the trade in human lives, which still echo down time, and it also had the emotional intimacy of a mother-and-daughter drama at its heart. So, for me it ticked all the boxes.” 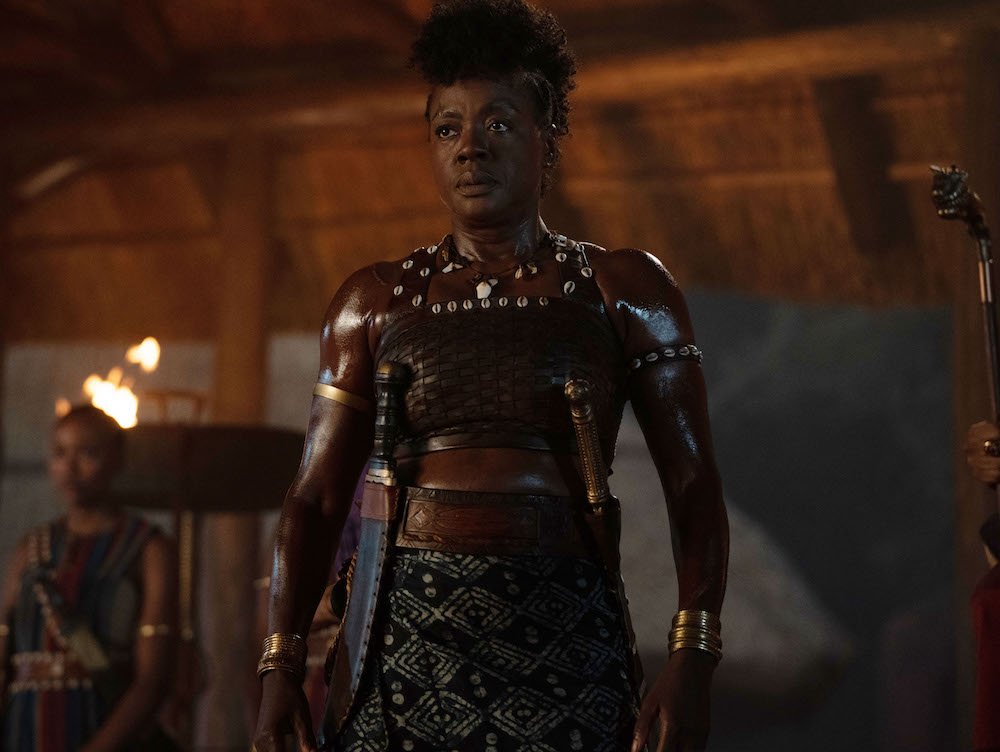 Morgan had never met Prince-Bythewood, but says she was well-aware of the director’s progress and prowess as a filmmaker from Love & Basketball (2000, DP Reynaldo Villalobos) and The Secret Life Of Bees (2008, DP Rogier Stoffers) through to The Old Guard (2020, DPs Tami Reiker ASC/Barry Ackroyd BSC).

“I was full of apprehension when I attended the initial Zoom meeting with Gina and presented my lookbook of ideas to her,” Morgan admits. “But I needn’t have worried. She was incredibly kind and attentive, and we were of like mind in terms of the visual treatment from the very start. 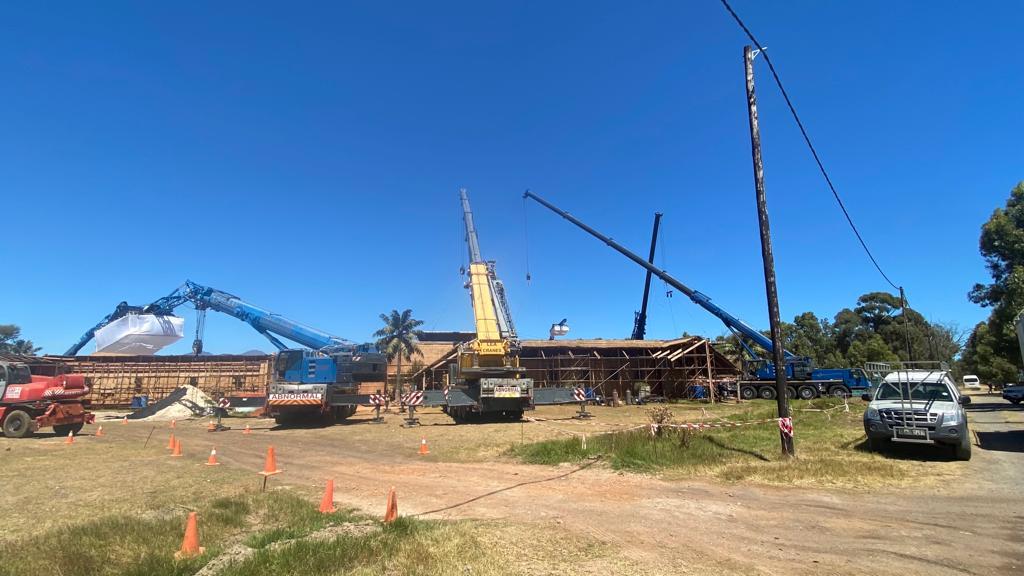 “We wanted to create a beautiful yet authentic movie, staying true to historical fact, telling the story of the incredible Agoji women in a way that felt real, visceral and raw, but not be overly glossy. We wanted to introduce a new vision of Africa – not as dry and dusty place, but a rich beautiful land that held this vast cultural kingdom of Dahomey – and to explore the reality of African light, the hard sun, the deep shadows and the varying weather.

“I learnt that whilst Gina loves shooting large format and handheld, her aim was to elevate the epic scope of the movie by harnessing a more fluid style of camera movement, and loves to use multiple cameras to get multiple angles at the same time in the action scenes. 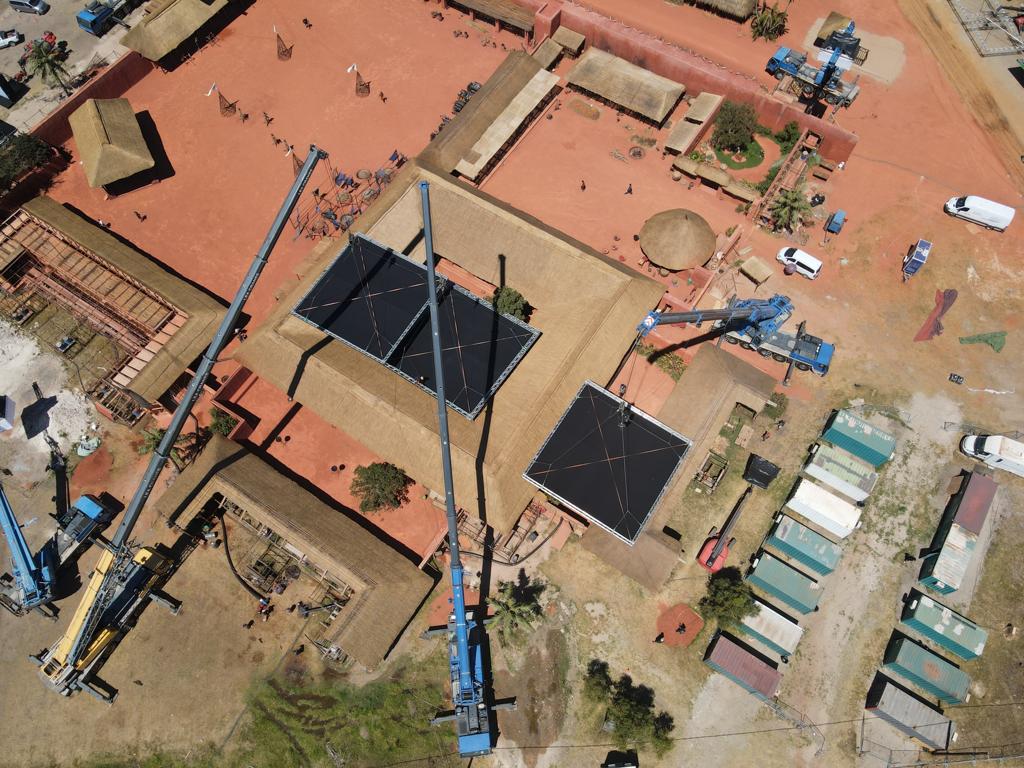 “However, within this context, it was also important to focus on the relationships between our characters, and the phrase ‘intimately epic’, kept coming up. When it came to portraiture, we wanted to celebrate the beauty of Black faces, lighting our characters to make them shine and show both their strength and vulnerability.” 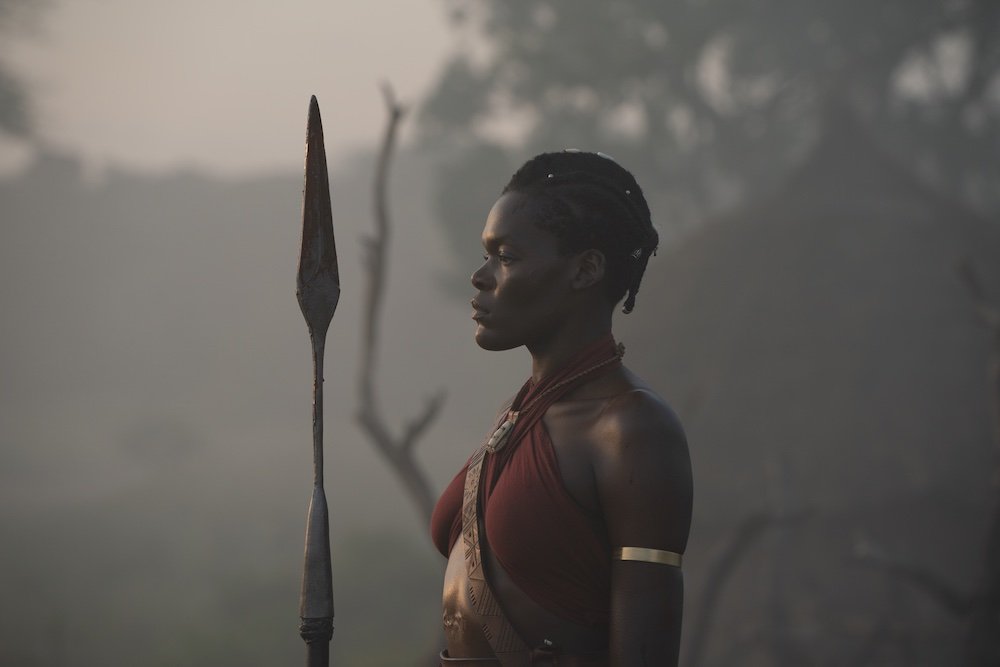 Principal photography on The Woman King began in November 2021 at locations around Cape Town, including a former munitions site about an hour’s drive from the city, where the Palace of Abomey was faithfully constructed on a huge backlot, along with KwaZulu-Natal in South Africa. Copious amounts of smoke and dust from the wind, helped to create texture in the film, lifting the shadows and softening the contrast. A splinter unit filmed bucolic landscapes in Ghana. Production however was shut down during December due to an outbreak of the Covid-19 Omicron variant, and resumed in mid-January 2022 before finally wrapping in March.

Morgan says would have loved to have shot The Woman King on celluloid film, but that was not an option. Consequently, her camera package included five ARRI Alexa Mini LFs fitted with T-series Anamophics, which were specially extended to cover the large format sensor, and detuned to give more softness in the toe, lower the overall contrast and accentuate the glowing characteristic of fire and candlelight. 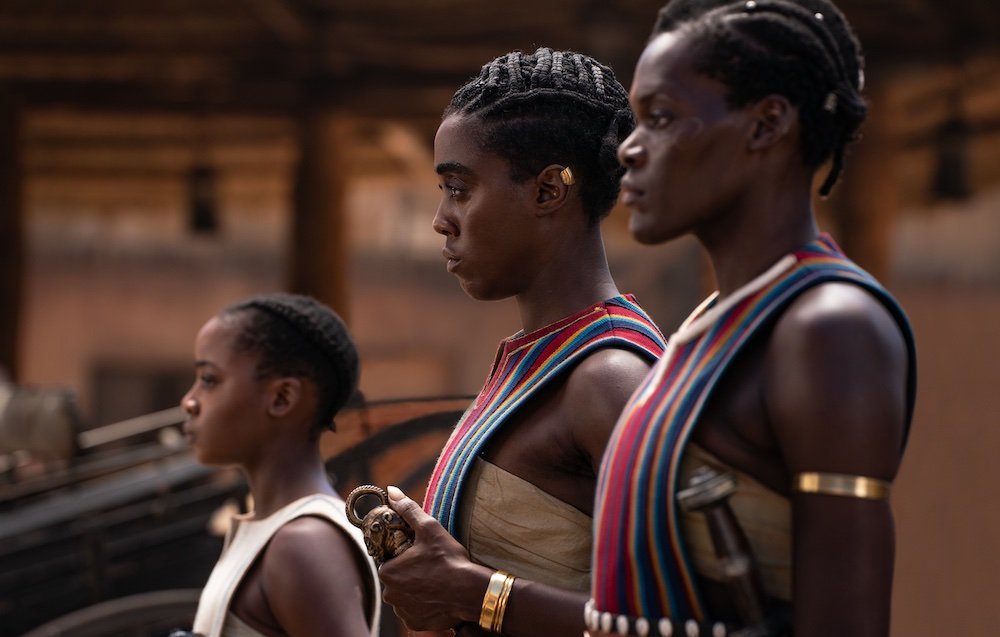 For the first two weeks of production Morgan was also able to use an ARRI Alexa 65 with Primo 70 spherical lenses, which were detuned to match the optical qualities of the T-series lenses. The camera and lens package was provided by Panavision branches in LA, London and South Africa.

“Although we had to release the ARRI 65, I kept the Primo 70s, as I wanted to be able to shoot in widescreen format, but didn’t want the typical blue horizontal Anamorphic flares, as they felt too modern and out of context for the period drama.

“We typically shot between T2.8 and T4 to embrace the quality and feel of the glass as much as possible. These stops, combined with a stigmatiser and extenders, created beautiful, but tricky, fall-off in focus, and definitely pushed the lenses and our focus pullers to their limits. 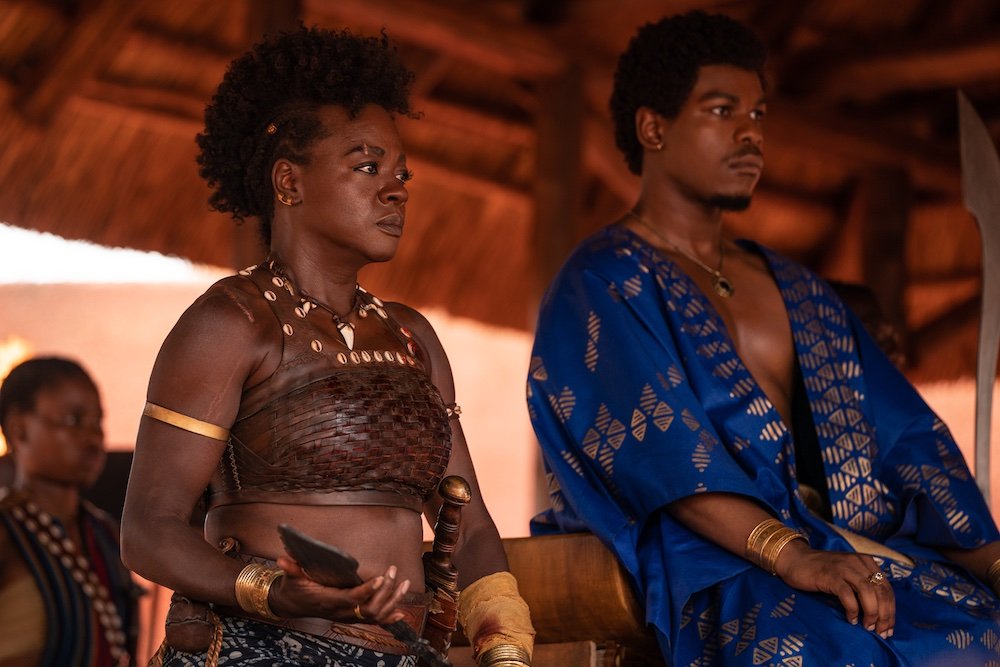 Viola Davis and John Boyega star in The Woman King.

“All of the fight sequences were shot at 48fps with a 360-degrees shutter, not to slow down the action, but to be able to speed it up if need be in post with no artefacts in the motion. We only had 58 shooting days for the entire production, and with lots of huge action scenes featuring hundreds of performers, the only way to do those justice to them in the small amount of time had was to shoot with multiple cameras, often up to five simultaneously on the main unit.”

During the movie’s test phase, Morgan also developed a set of LUTs with DI colourist Walter Volpatto at Company3 in LA, which had contrast curves similar to celluloid film, plus neutral greyscales so that in low light the skin tones kept their natural warm values and West Africa would be depicted as the richly luscious place it is in reality. 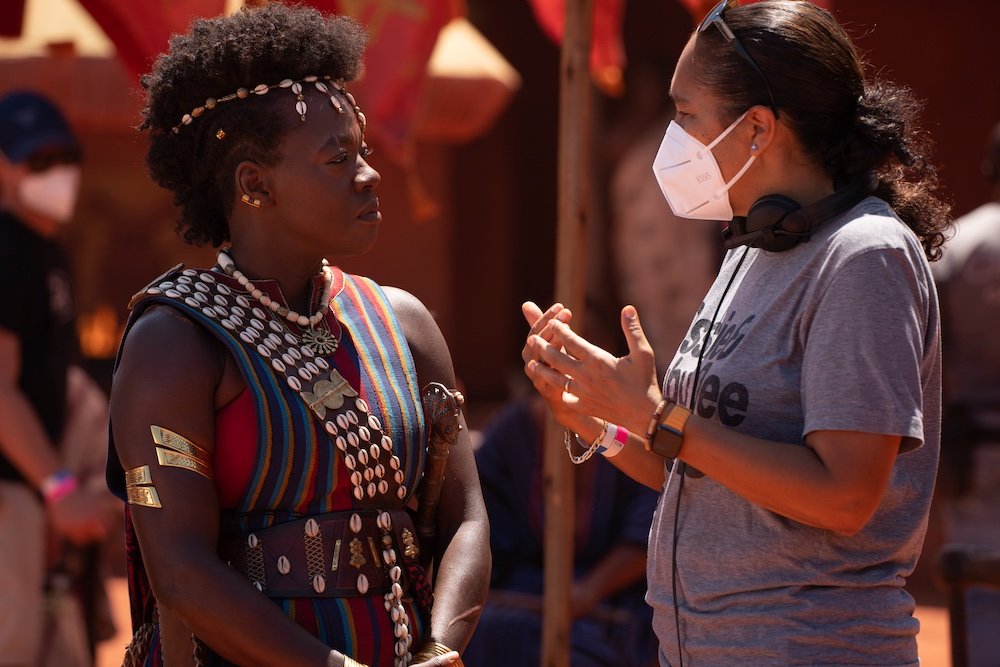 Viola Davis and director Gina Prince-Bythewood on the set of The Woman King.

Having never shot in South Africa before, and needing a stalwart camera and lighting crew, Morgan sought the counsel of DP Mark Patten BSC, who had recently shot Raised By Wolves there.

“Mark was very gracious, and helped to connect me with a good many of his camera team, and I was able to secure the considerable and indefatigable talents of gaffer Oliver Wilter, key grip Roderick Dean-Smith, operators Peter Belcher and Dale Rodkin, and DIT Nigel Tompkins, amongst others.”

Taking on-board Prince-Bythewood’s penchant for handheld, but distaste for Steadicam, Morgan turned to her key grip, who came up with an interesting new way of moving the camera that created a hybrid look between those two modes of moving the camera, and which proved especially useful for the big action sequences.

Lashana Lynch and Thuso Mbedu star in The Woman King.

“We deployed a rig – that we called the ‘Spring Balance’ – where the camera was fitted to a DJI Ronin 2 and spring balance and then suspended on a length of cable, like a bungee cord, from a Pettibone telehandler. With the camera operator on wheels, the key grip could then run into the thick of the action, with the camera on the end of the cable. We could alter the height to the lifting device to change the radius and the circumference of the movement.

“The effect was little bit more frenetic than Steadicam, but not as crazy as handheld would have been, whilst giving us the ability to move the camera really quickly and with a great deal of freedom and flexibility. Shooting on wide-angle lenses meant we could get very close to the actors. We also conceived a bunch of really long, fluid oners that moved between our different hero women and really got in the middle of the action in various fight scenes. Sometime on several cameras at the same time.” 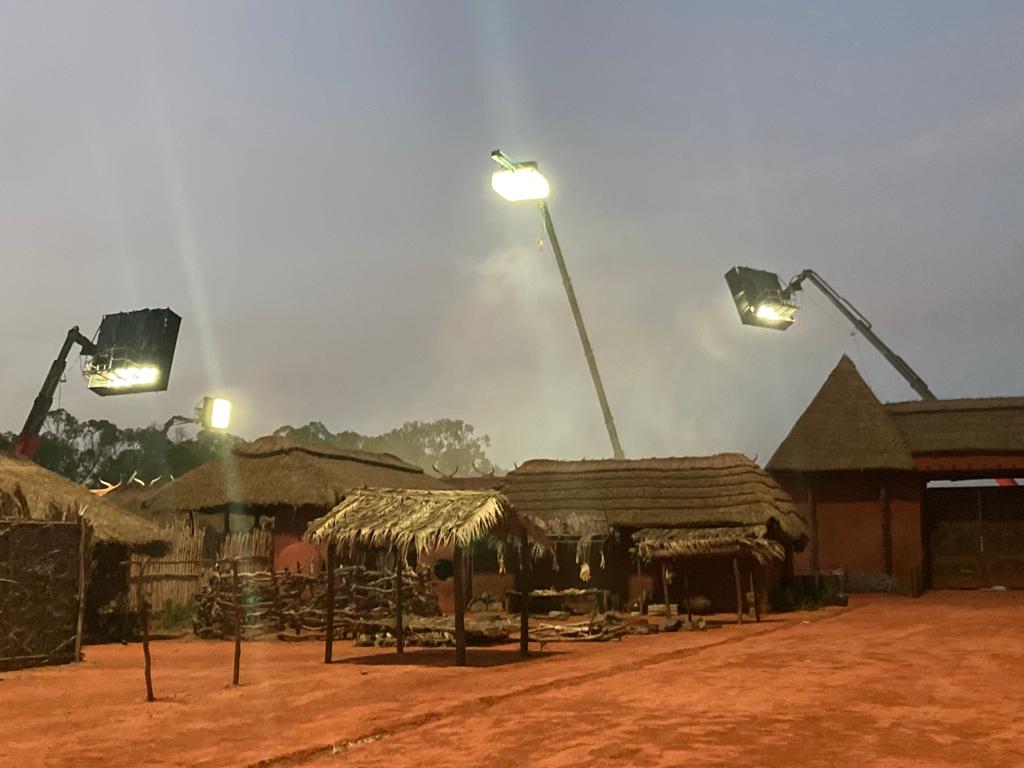 As for the illumination, Morgan says day interiors were lit to be atmospheric, with a strong interplay and colour contrast between cool daylight and the warmth of firelight at 1700K, with hard light providing patterns and shafts of light. Day exteriors embraced the natural top light of the African sunshine, especially when that helped to depict the ugliness of humanity and convey the frightful character of a place that traded in human life. Night scenes were embraced colour contrast with the warm firelight against the cool tones of moonlight at 4400-5600K.

“I plotted coverage on the day exteriors according to the path of the sun, and often crossed the line of action in bigger scenes halfway through the day so that the lighting wasn’t flat in the afternoon, and used 3 or 4 x 20×20 unbleached muslins for bounce, plus silks and grids for diffusion,” says Morgan. “A polariser helped with the reflection of light on dark skin tones, and was especially useful when I couldn’t control the light and wanted to take the brightness of the highlights down on skin. 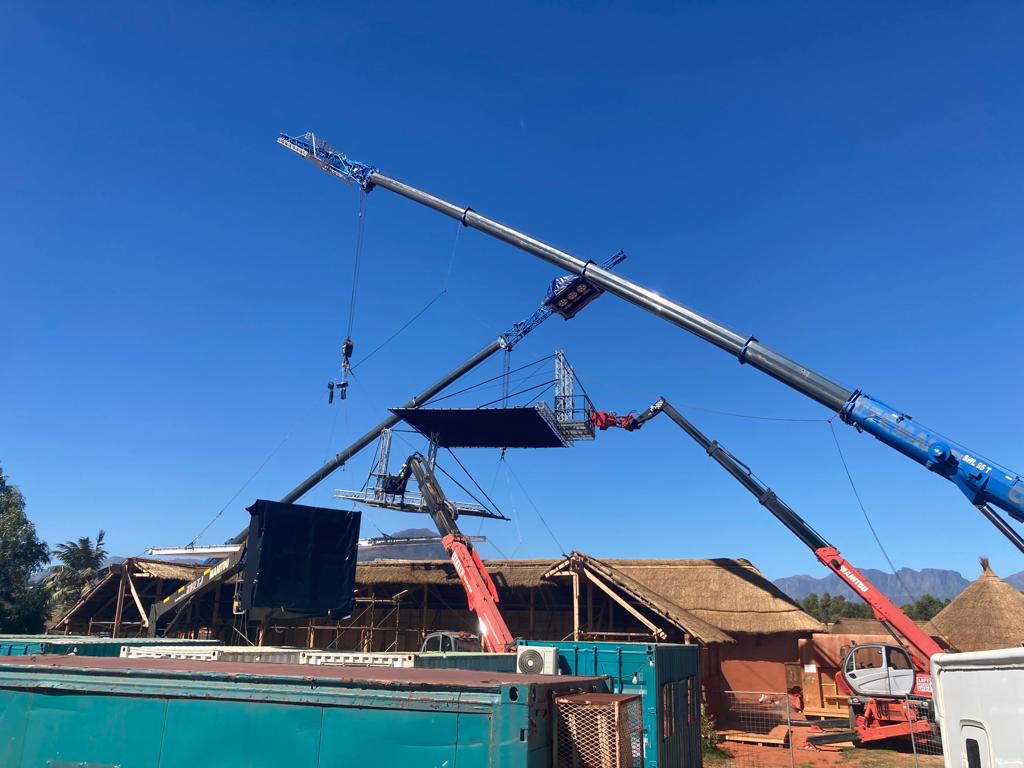 “I used Filmgear Helios Space lights for all the night work and made moon boxes of various sizes. For the fire effect on the beach, we had 45 Helios lights, instead of conventional Dinos, so we could have full colour control and adjust the flicker speed, and used real firelight or flame bars dotted around the place to either light the actors or the surrounding environment.”

“Looking back, The Woman King was an incredibly challenging experience, with huge sets and action sequences to light and shoot, and some extraordinary downpours and high winds to contend with, all whilst working six-day weeks. But Sony were very gracious with my flight and housing alliance, which meant my husband and children were around during production, which is just want I needed at the end of long and gruelling day.” 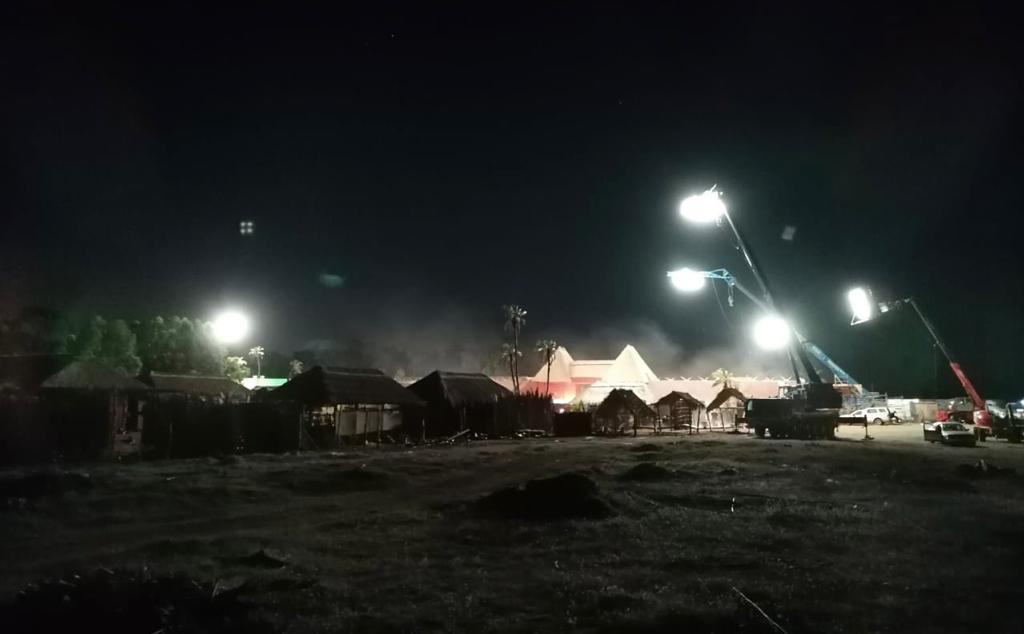