“History was not made by guys like me,” says Julio César Strassera, as he and his brave but makeshift legal team face the seemingly-impossible task of holding a set of military leaders to account for terrible atrocities.

Based on real events, Amazon Studios’ gripping courtroom drama, Argentina 1985, follows the 1985 ‘Trial Of The Juntas’, which prosecuted the ringleaders of Argentina’s last civil-military dictatorship (1976–1983). It centres on the monumental work of the determined group of lawyers, led by prosecutors Strassera and Luis Moreno Ocampo, often working under death-threats, against those responsible for the brutal dictatorship and their practice of ‘disappearing’ – which included the kidnap, torture, rape and killing of citizens, including women and children. 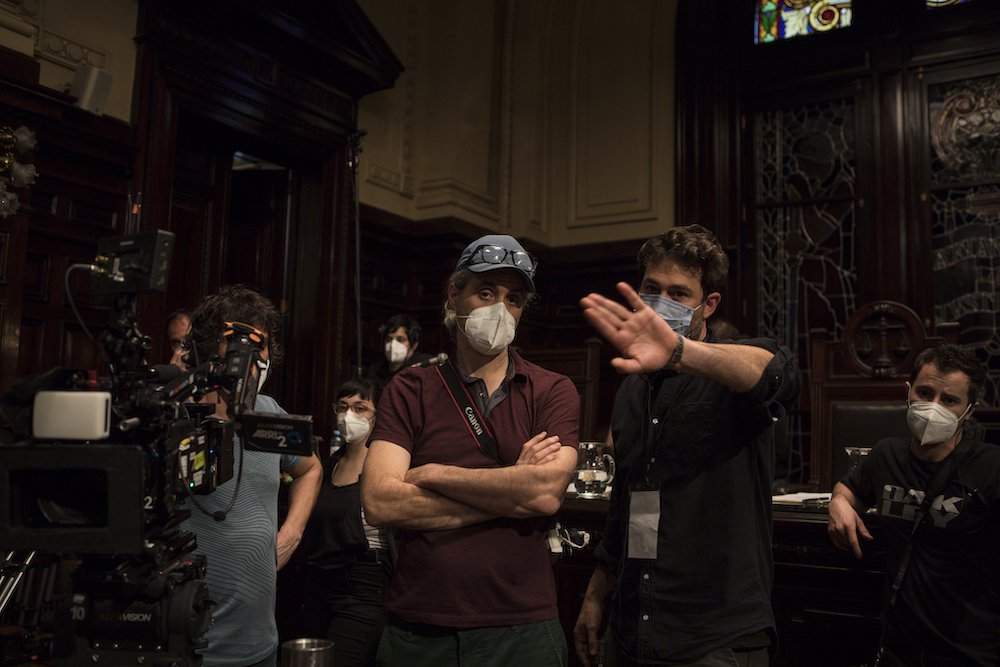 Produced and directed by Santiago Mitre, from a script by Mitre and Mariano Llinás, the film stars Ricardo Darín as Strassera, with Peter Lanzani as Ocampo. Argentina 1985 premiered in-competition at the 2022 Venice Film Festival, and was selected as the Argentinian entry for Best International Feature at the 2023 Academy Awards, plus Best Ibero-American Film at next year’s Goya Awards. It also earned acclaim for its evocative, artfully-filmed, satirical edge and swells of heart-breaking emotion. 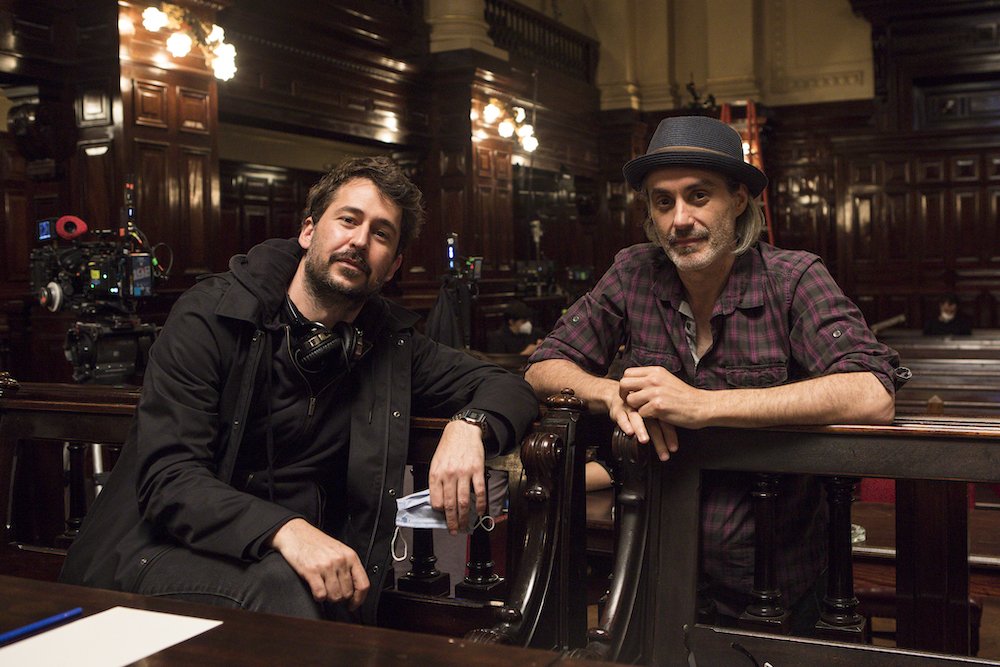 “The Trial Of The Juntas was a huge and historic moment for our country,” remarks Juliá. “Looking back over the last century, between 1930 and 1983, we lived under several military dictatorships, and thanks to the outcome of this landmark trial we have enjoyed a long period of democracy now, almost 40 years.

“It was an heroic achievement by Strassera and his team, and it was the first time the leaders of the military dictatorship were tried in civil courts for the crimes they committed. 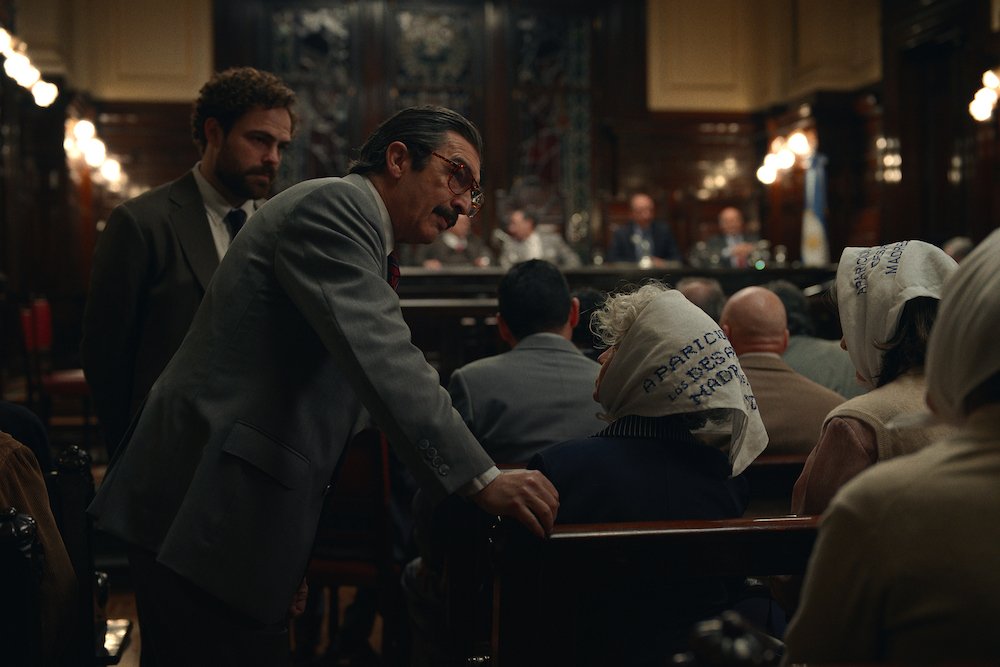 “However, it is a piece of history that has not been properly recognised, and many people in present-day Argentina are unaware of what happened back then. So I was excited to get involved in it with Santiago, but was in no doubt that it came with a great responsibility.”

The on-set of Covid lockdown meant the production was delayed, which gave Juliá and Mitre additional time to develop the project. This included the chance to watch many hours of archived testimonies, recorded during the trials themselves.

“I was excited to get involved, but was in no doubt that it came with great responsibility”

“Those were very painful and extremely emotional to watch, but they provoked ideas about how we wanted to make this film,” Juliá reveals. “We wanted to stay away from an aesthetic that looked old, or nostalgic, and to tell a story that could be happening now. Our approach was to try to make a film that looked and felt more contemporary. 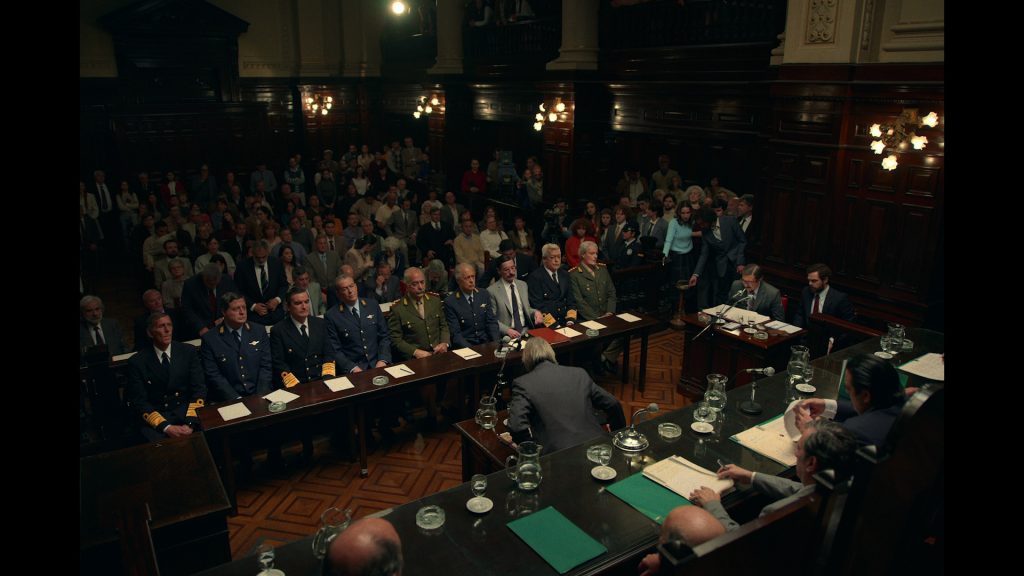 “Also, during our courtroom re-enactments, I did not want to try to mimic the actual footage from the trails. Most of that had been shot from behind the witnesses, just the backs of their heads from a distance on long lenses, to ensure their protection. We wanted the exact opposite. We wanted an immersive experience, close to the witnesses, to show faces and to make the audience feel they were there bearing witness too.

“Normally, I like to depict the context of a character and the background with wider lenses and a nice a depth-of-field. But, for this project, we were drawn towards the idea of shooting large format and to capturing the courtroom scenes using much shallower depth-of-field, shooting wide open on slightly longer lenses, in order that we could look deep into the eyes and the emotions of the witnesses, without any other interference or distraction between them and the lens. 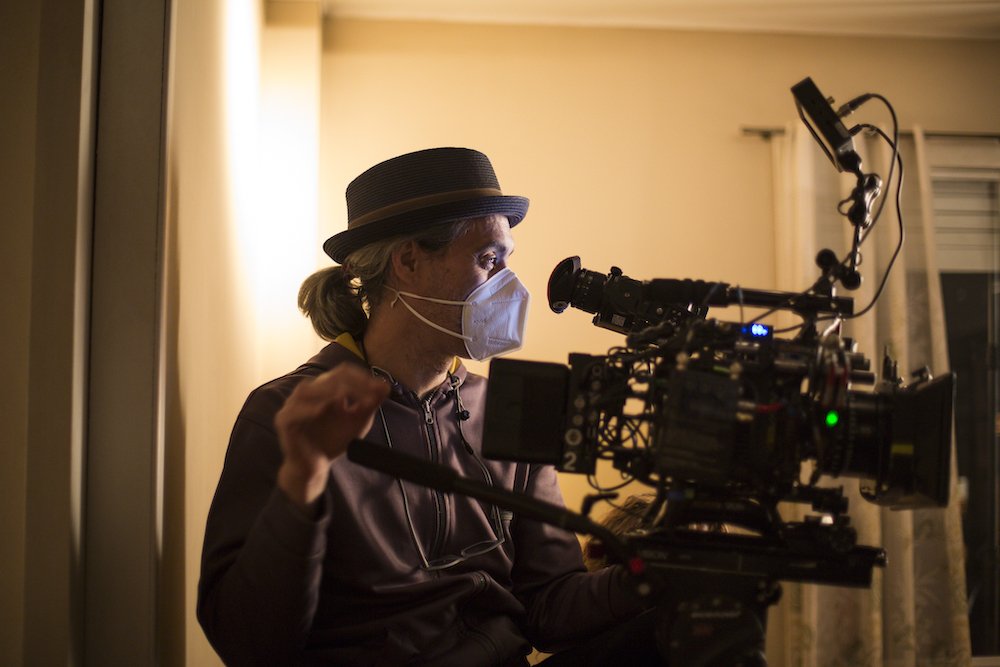 “Also, I wanted to create a contrast between the trail and what happens outside the courtroom, by using wider lenses and bringing a certain texture and rawness to the images in those other scenes.

“So we decided to embrace new camera and lens technologies to tell the story, and let the wardrobe and set design do the time-travelling, led by production designer Mica Saiegh and costume designer Monica Toschi. And, we wanted colour, nothing monochromatic or sepia-toned, just lots of colour.”

Juliá adds that, to keep the visual storytelling focussed on the characters, he and Mitre opted against shooting in widescreen or Anamorphic formats, nor did they want to frame 1.85:1 or 16:9 either. They opted instead to shoot in 3:2 aspect ratio, which has roots in 35mm film and photography. 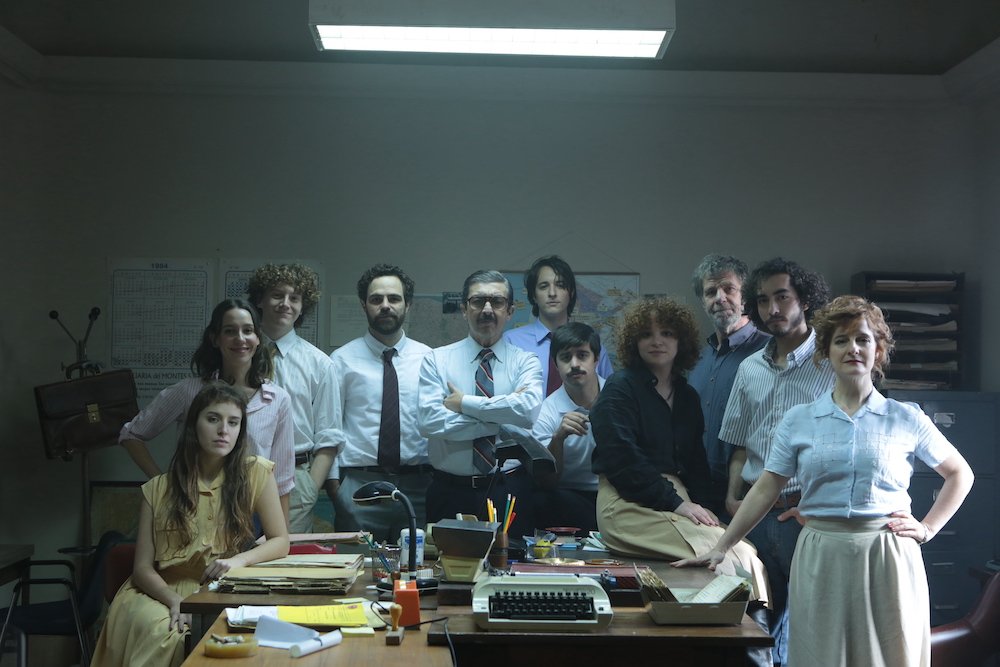 “Shooting 3:2 is a little different in the way you need to compose the frame, compared to the main production formats. So it’s kind of modern and different, and it played to our sense of not being nostalgic that some other aspect ratios can suggest and imply.”

Creative references included: Janusz Kaminski’s seamless use of real footage in such gripping thrillers as Munich (2005), and evocative framing and lighting in Bridge Of Spies (2015); Gordon Willis ASC’s narrative use in All the President Men (1976); plus Mihai Mălaimare Jr’s close-up work, using 65mm film, for the psychological drama, The Master (2012).

Julia and Mitre also considered the work of legendary Japanese photographer, Masahide Tomikoshi, who photographed every World Cup between 1974 and 2010, and whose colourful images of the 1978 event in Argentina, around Buenos Aires, proved particularly interesting. The more recent work of Argentinean photographer Maxi Magnano, known for mesmerising and timeless photos of urban landscapes and everyday interior settings, was a touchpoint too.

After much testing and deliberation, Juliá went with the ARRI Alexa LF and Signature Prime lenses for the courtroom sequences, rating the camera at normal ISO and shooting the close-ups wide-open, with classic and restrained camera movement, typically on dolly tracks and crane. 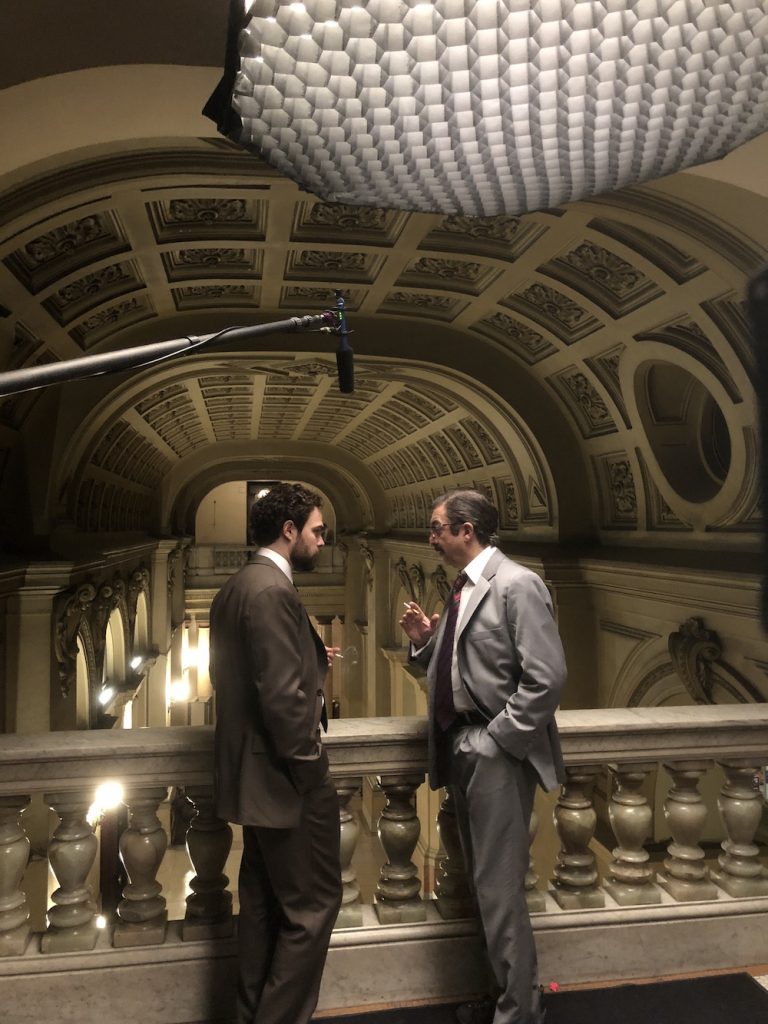 The rest of the live action, outside of the courtroom, was also captured on the Alexa LF, but harnessed vintage Canon FD glass at between T4 and T5.6, with the camera rated at 1280 and 1600ISO to encourage a modicum of digital texture. Movement was frequently handheld to mirror the energy amongst the legal team or the tension in the Strassera household.

The main camera package was supplied by Alfavision in Buenos Aires, with the Canon FD lenses rented through Ópticas HC. In the final movie, flashes of what appear to be archival footage from the trial, were shot using a vintage Sony DXC-M3A Saticon ENG tube camera from the 1980s (also supplied by Ópticas HC), and that footage was cleverly spliced into the storytelling during the edit, for an even more immersive effect. Juliá operated during most of the production, assisted by 1st AC Martin Dotta on focus. A second camera was introduced for scenes involving multiple characters in the courtroom and the lawyers offices, and that B-camera and second unit photography was conducted by Manuel Rebella, supported by Mariano Juri and Alejo Giles on focus.

During test and prep, Juliá worked with DI colourist Luisa Cavanagh, to develop two LUTs – one for the courtroom interiors, the other for everything else – that would help the colourful rendering of the set and wardrobe design. During production, the DP worked closely with DIT Martin Bendersky to make sure the dailies at the different locations were balancing together, and this aided a smooth and efficient final grade by Cavanagh. 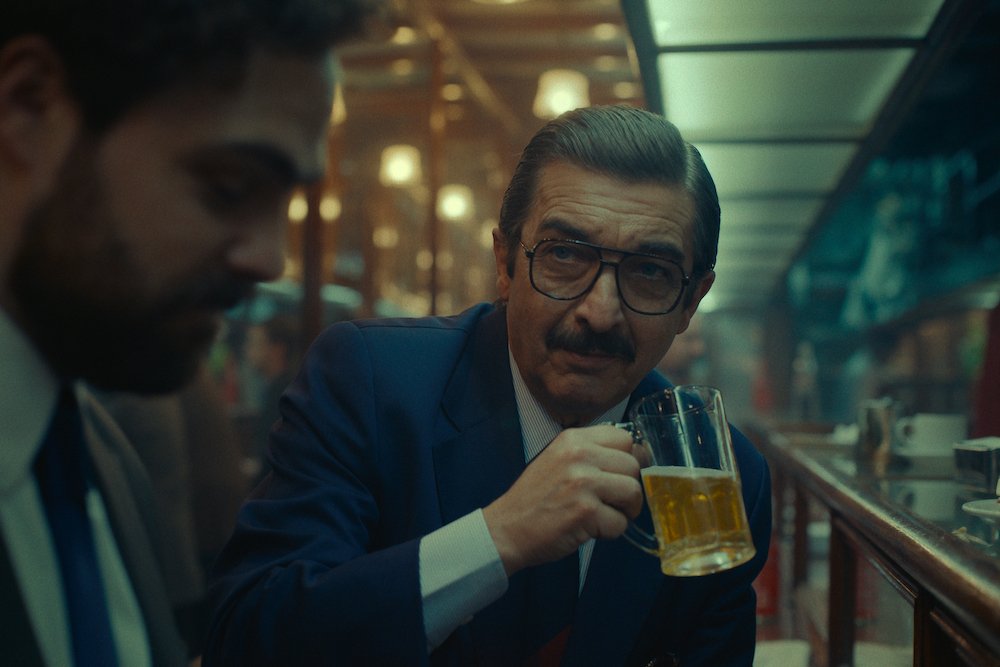 Production took place over ten weeks, between June and September 2021, at locations around Buenos Aires, including the same courtroom, the Sala De Audiencias, where the original trials took place. Strassera’s apartment and offices were set-builds. Juliá reveals that local support for the production was such that, for night exteriors scenes around the city, it was no problem to have mercury vapour and modern LED street-lighting replaced with sodium vapour illumination.

“The courtroom remains almost exactly the way it 40 years ago,” Juliá remarks. “The people who work there were really behind the film, and they helped us a lot.

“However, it was very difficult space to light as it is a protected building. I have to thank my gaffer, Jaime Muschietti, Pablo Lopez from FXSM, and key grip Sergio Olmos, in devising a lighting set-up, both overhead and on the floor, that would give me the right quality of softlight light, and would allow for 360-degrees freedom-of-movement, all without damaging the building itself. 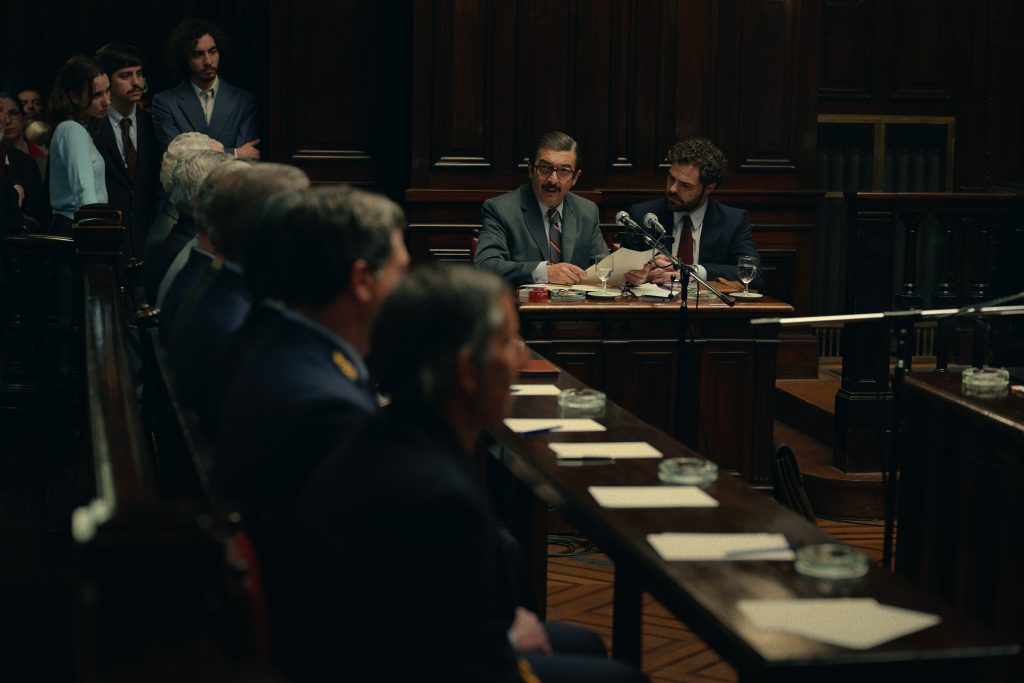 “The top light was perhaps the most difficult aspect of this, as Skypanels would have been too heavy. So the team built an arc out of trussing between the galleries, from which we could suspend a large softbox for overall illumination, plus other, smaller softboxes above where the judges and lawyers were sitting.

“When we filmed the close-ups on the witnesses, I lit them more softly from above with a Hudson Spider. All of the lights, including those on the floor and practicals, were connected to a dimmer board, so we could easily control the lighting as we went along.”

Juliá concludes, “Making this film was a really emotional experience, as it is such an important part of our national history. At a time when people and politics are becoming polarised, I am hopeful that it is a story which younger generations will discover and feel very proud that, as a society, we could restore justice and democracy against the odds.”