James Friend BSC ASC • All Quiet On The Western Front

All images courtesy and copyright Netflix.

All Quiet On The Western Front immerses us in the hopelessness and the horror of the war right from its opening sequence. We see a nameless German lad die on a battlefield, amidst countless fellow soldiers, only to watch the process of recollecting and mending his uniform to give it to another wide-eyed boy destined to be cannon fodder. Then, we follow the new one’s harrowing experiences in and out of trenches while politicians and generals prepare to sign the Armistice. Yes, watching this film hurts, but if you can stomach it, it will change the way you see things. 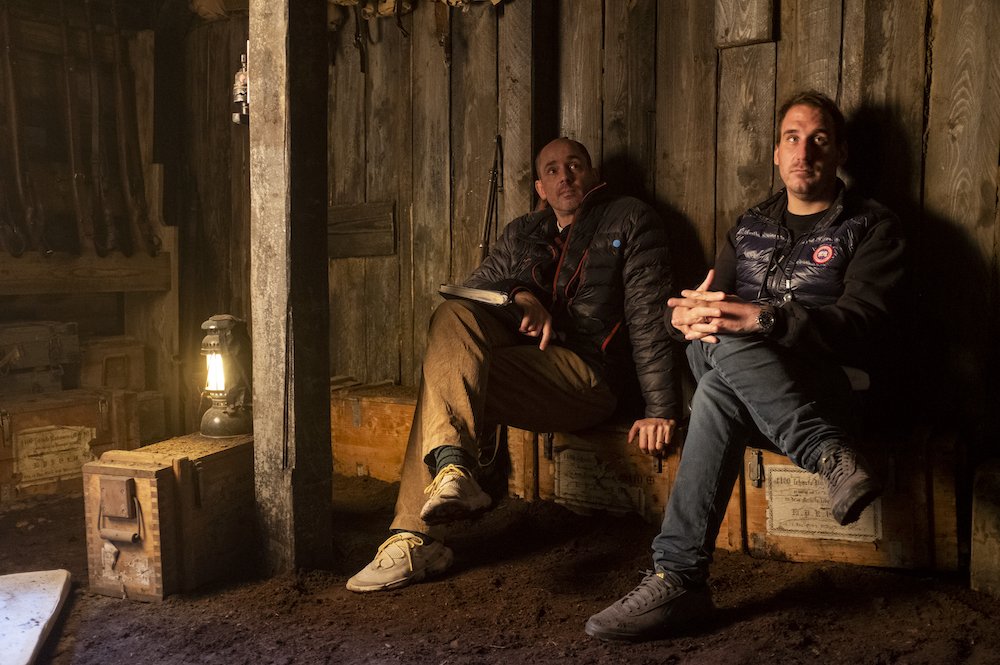 Friend met Berger years ago on Patrick Melrose, a TV series that brought him Camerimage Festival recognition, and professional kinship that led to another series, Your Honour, before they cam together once more for All Quiet On The Western Front.

“I’d always wanted to make a war film and, having read the novel, I knew it wouldn’t get better than this. But it was difficult to get it off the ground,” Friend reminisces. “We were one of the first of the bigger movies in Europe to com together after the initial Covid shell-shock, and this was quite an ambitious one. Taking the amount of actors and extras into account, the producers did an amazing job.”

Friend says he felt particular responsibility for adapting this story into a film. “The task was pretty daunting, as it’s the closest thing to the true story. I mean, this happened to so many people. We felt real weight to all of our decisions. In prep, we watched a lot of war films, but decided not to look at the 1930 American classic. We reference it in one scene, but we wanted to do the film on our terms, shoot it in an enhanced naturalistic style, even if it would be extremely upsetting. We stayed true to the colours of the uniforms, the weapons, the mud. It’s very bleak.”

One of the films they referenced was Sam Mendes’s 1917. “I’m a huge fan of Roger Deakins, and because Ed and I like discovering the space with the actors, 1917 seemed a natural fit. What Roger achieved, with his camera and his grip teams, such as the stuff they did with the Stabileye gimbal, was amazing. We were flabbergasted at how you could move a camera over that range in such a seamless way. It was a valuable lesson as we needed equally-complex shots, and we were lucky to have the same technician, Peter Whitcombe, who worked on 1917, doing the Stabileye for us.”

He admits shooting World War I trench warfare was the most gruelling task of his career.

“There’s a big set piece in the middle of the movie where the Germans invade the French trench, and then the French take it back whilst the Germans are retreating. We shot it in ten days, which wasn’t a lot considering all of the special effects, tanks, extras, choreography and light/weather implications. This was really a single unit show, but we had two units running, and had to manage both running backwards and forwards.”

Friend recalls shooting was also tough on emotional level. “These were the toughest conditions I’ve ever worked in. Even to walk across the battlefield for a toilet break we had to rip through mud in extreme cold. And when we needed to run with the camera gear during takes, it got to a point where it was almost unmanageable. I would find myself standing amongst dead bodies, extras in full make-up, blood and guts everywhere. You are mildly desensitised when you are shooting, but doing a movie like this, you can’t escape soaking-up some of that in, and it did take its toll emotionally.”

The idea behind the enhanced naturalism and historical accuracy was to immerse the audience in the protagonist’s evolving perspective, starting as a naïve patriot who fakes his father’s signature to enlist, through to a shell-shocked soldier who had witnessed far too much horror.

“Our characters perish one-by-one, just like that,” says Friend. “I called my father one night to tell him how tough it was. He reminded me that my great-grandfather fought in the trenches for real in the Battle of the Somme. And it suddenly put everything into perspective, though I’ll never forget what we had to go through on that set.” 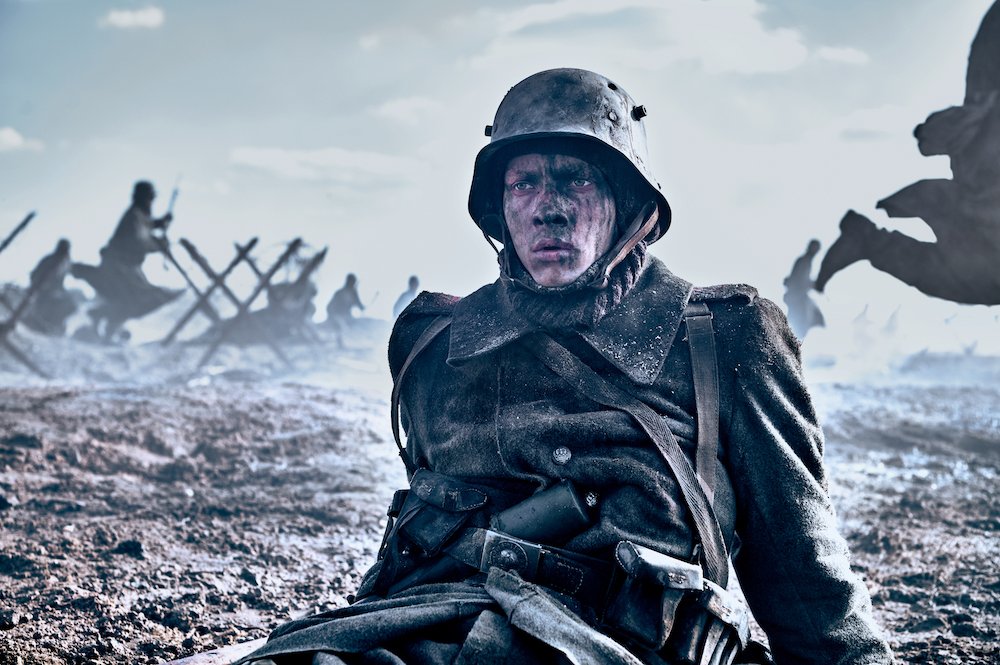 To depict the protagonists’ excruciating journey, Friend resolved to use four different cameras and various lenses. “I’m in love with large format cameras, and I convinced the producers to pick ARRI Alexa 65 as our principal camera. I wasn’t interested in pointing it at a battlefield, but to use it to depict the experience what it was like in the confines of a trench, or the back of a truck, or in a supply train, the camaraderie.”

Yet it was not the best option for complex shots with anything heavily action-oriented. “The logistics and grip requirements of moving a camera at speed through the trenches or No Man’s Land made us pick the Alexa Mini LF. Also, we had only 400 extras and we’d be struggling with the Alexa 65’s field-of-view to make the battlefield shots look populated, even with loads of fog. We shot the sort of quieter scenes on the Alexa 65, and the Alexa Mini LF footage blended seamlessly with that. When I was watching it in the DI, I couldn’t actually tell which was which.” 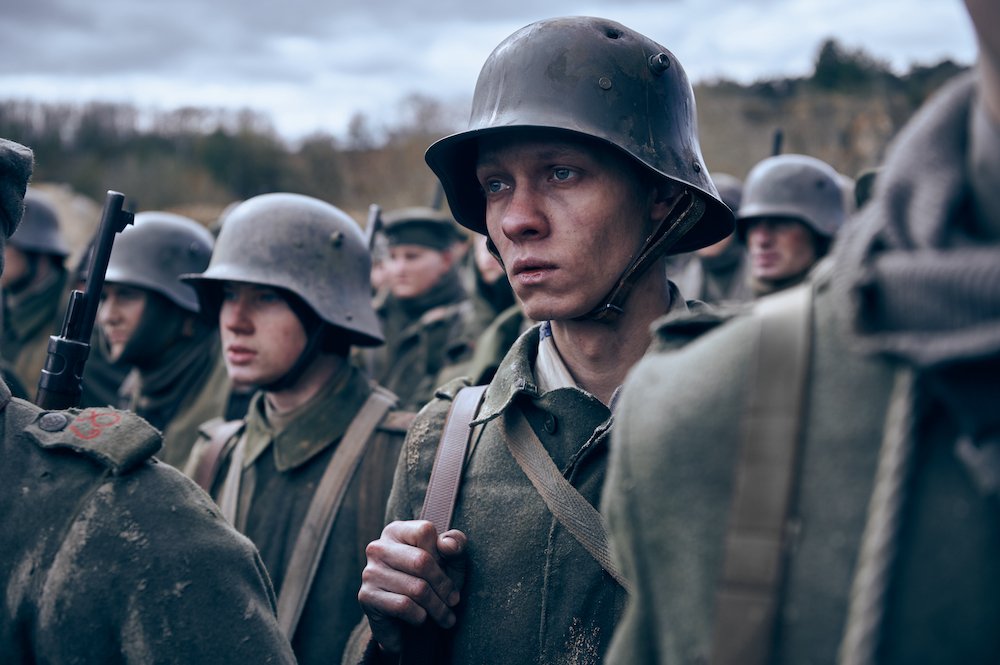 For night exteriors Friend changed to Sony Venice and shot at 2,500 ISO.

“There was no artistic philosophy behind it, this choice. I have learned to follow my gut instinct and sometimes it’s hard to articulate,” he remarks. “I wanted to work in low-light conditions, but didn’t want have the gunfire and special effects look too punchy. Thus the Venice, which is always reliable in such conditions.

“I shot the VFX work and a lot of the plates of the explosions on my personal RED camera, and all-in-all, those different formats and cameras gave us the look we wanted.” 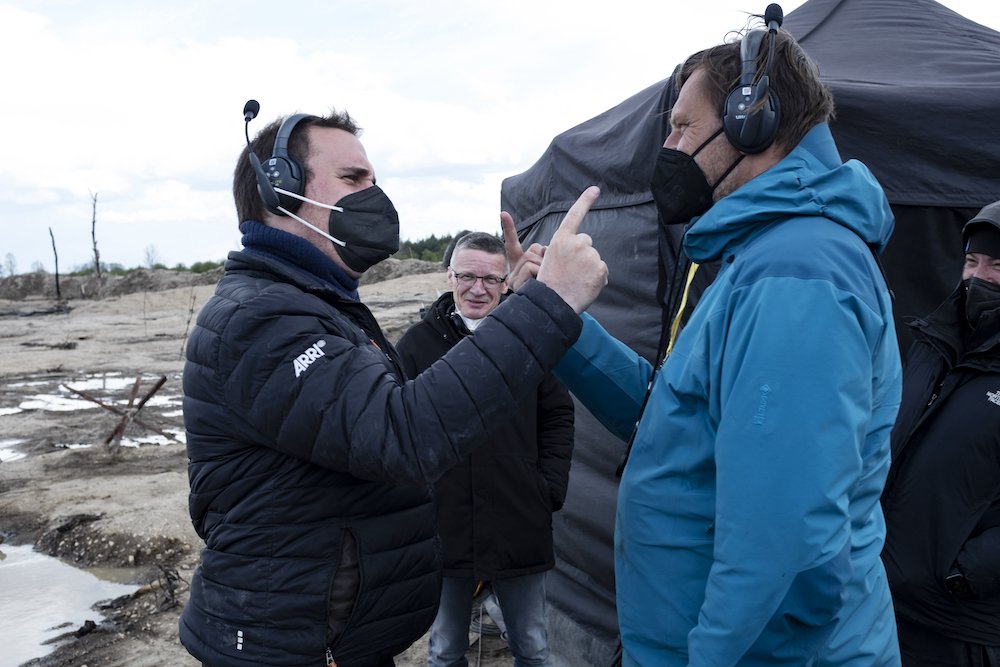 Friend also says film he used, “a mishmash of different types of glass. We shot most of the film using ARRI DNAs and Tribe 7 Blackwings T-Tuned series. However, you can get into trouble when you point them at a bright window in a high-contrast environment.

“As our location was starting to get hot and bright, I needed glass that was more stable. Also, I wanted a particular look on the more optimistic moments at the very beginning, when we see young men enlist was done, I also went with the ARRI Prime 65s, which are less contrasty and have lovely halation in the highlights.” 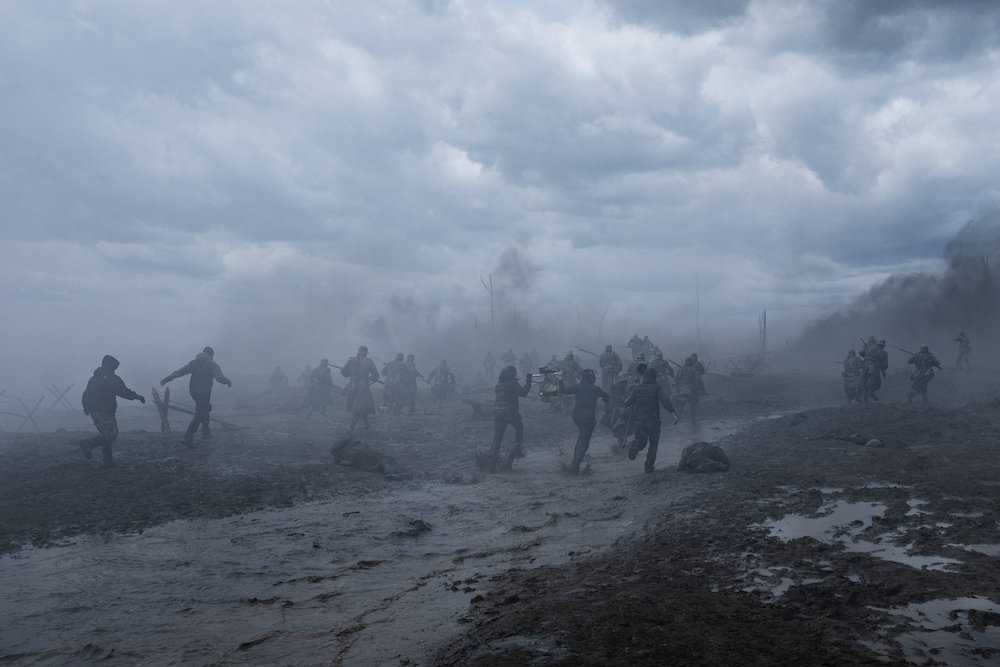 All Quiet On The Western Front saw Friend really embraced LED lighting technology. “We used a lot of ARRI SkyPanels S60s and S360s, and had them in 12×12 frames just outside the edge of the picture. When you’re doing vast exteriors, you need something with a bit of punch. We also brought in the biggest construction crane in Europe, and suspended a huge softbox, containing dozens of SkyPanels, over the middle of the battlefield to fill in the area”

Principal photography took place during 50+ shooting days between March and May 2021 in the Czech Republic, though there were some early shoot in January and February to use the available snow. Some sequences, however, were recreated on stages at Barrandov Studios in Prague – such as the signing of the Armistice in a railway carriage set, which was shot against an LED wall – but it was predominantly a location shoot. 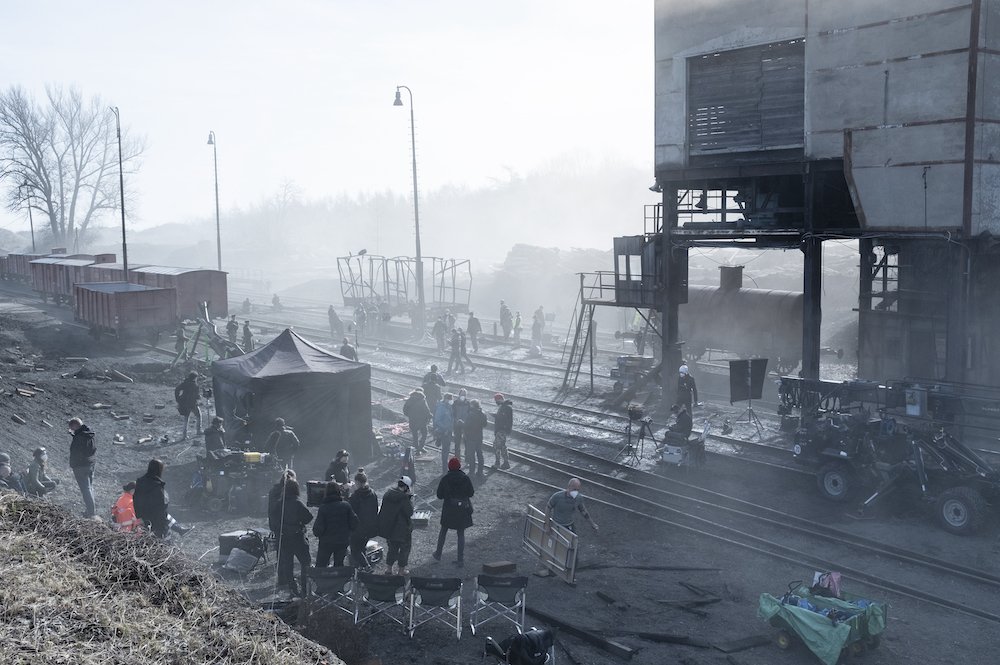 In Milovice, a twenty minute drive from Prague, they found a perfect location for the battlefield.

“It was an old Soviet airfield with an enormous runway, which was naturally flat and enabled us to park our whole unit with the construction crane and lighting tools at an acceptable distance,” Friend recalls. “Its vastness proved a logistical problem, but together with the production designer we built three roads with a thin layer of soft mud on top to so we could be reasonably mobile. You don’t see them on-screen but they’re there, and they saved our lives more times than I could count.”

“Wanted an enhanced naturalistic style, and stayed true to the colours of the uniforms, the weapons and the mud”

The logistics of the battlefield shoots still proved a sudoku-like exercise. “In the prologue, we started with a single grip going through the trench with the Stabileye, before hooking the camera on to a 50-foot Technocrane, and then unhooking it so we could run with the character outside of the trench. We shot it during a three-hour window in the morning because later we’d have the sunlight coming straight down the lens. On other occasions we had tracking vehicles going-up and down the roads with the Stabileye.”

The final DI grade was done at UPP Prague. “I like simplicity and had the idea of enhanced naturalism on my mind, but we pushed it a bit too far initially, and I didn’t feel it was looking good. Fortunately, there was a break in the process lasting several months, and when we returned, we peeled things and the look became much more attuned to the original sensibilities we were after. Sometimes you can over-engineer things, I guess.” 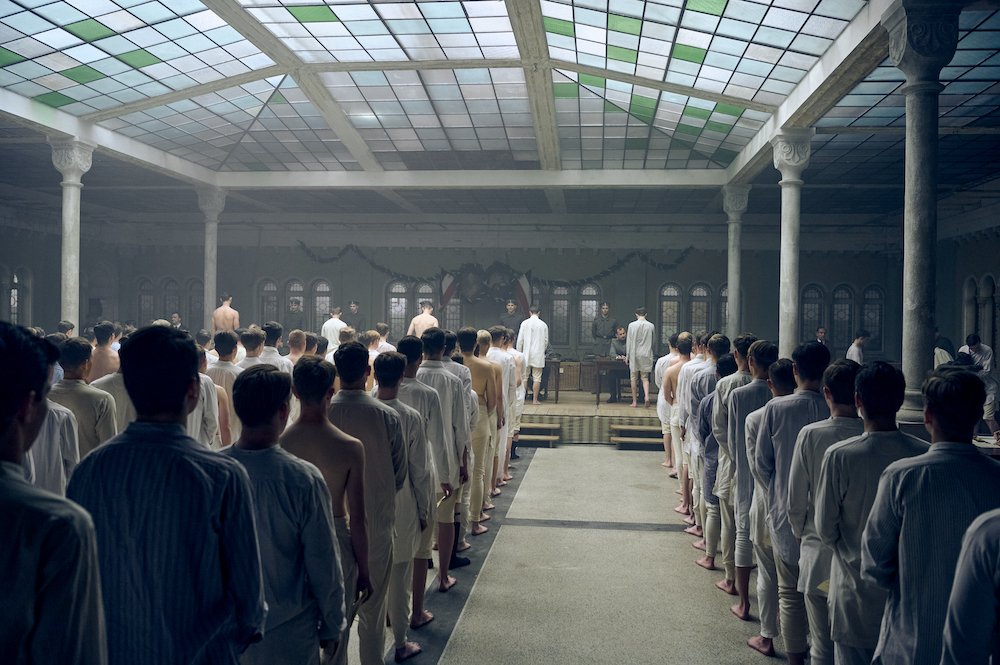 Even so, Friend is very proud of how the film looks. “It was a challenge and a nerve-wrecking experience, but we managed to pull it off, bit-by-bit, shot-by-shot, scene-by-scene.”

All Quiet On The Western Front is an impressive achievement of how impassioned filmmaking can not only recreate the past traumas, but also force us to embrace the lessons learned by those who died over a hundred years ago. Friend returns to Camerimage with the film in the coveted Main Competition, and it is possible he will not leave empty-handed.