Illuminating The History Of Mahalia Jackson with DMG Mix lights

Cinematographer and Rosco Ambassador Eduardo Ramirez ADFC recently shot Remember Me: The Mahalia Jackson Story. The film, directed by Denise Dowse and written and executive produced by Ericka Nicole Malone, had its world premiere at the Pan African Film Festival where it won the Best Narrative Feature Audience Award. The film also took home awards for the best feature film, best director, and best film actress at the Las Vegas Black Film Festival. Starring the Grammy Award-winning singer Ledisi as Mahalia Jackson and Columbus Short as Martin Luther King Jr., the film focuses on the career of Jackson and her uncharted contributions to the Civil Rights Movement. Below, Eduardo shares how he used the entire family of DMG Mix lights to re-create the colourful history of this project.

Remember Me: The Mahalia Jackson Story – Coming Soon To A Theater Near You!

The film chronicles Mahalia Jackson’s life from the 1930s to the 1970s. To depict the period from the 1940s onward, I tried to emulate the feel of Kodachrome as much as I could for this part of the film. I found it interesting that, in order to reproduce the old feeling of Kodachrome, I needed to use the most modern lighting technologies available today – Rosco’s range of DMG Mix lights. Their fast setup, high output, and colour rendition made them my first choice.

Each Mix fixture features a 360º hue wheel that enabled me to create custom colours for this project. Each light also features a Gel Mode with a library of True Rosco Color gel matches to choose from. More importantly, on this project, the Mix fixtures allowed me to also effectively control the saturation of any colour. This feature was instrumental in re-creating the feel of Kodachrome in the film. Some of the colours I used to evoke this period were E5336 Aztec Gold, E652 Urban Sodium, and R61 Mist Blue. 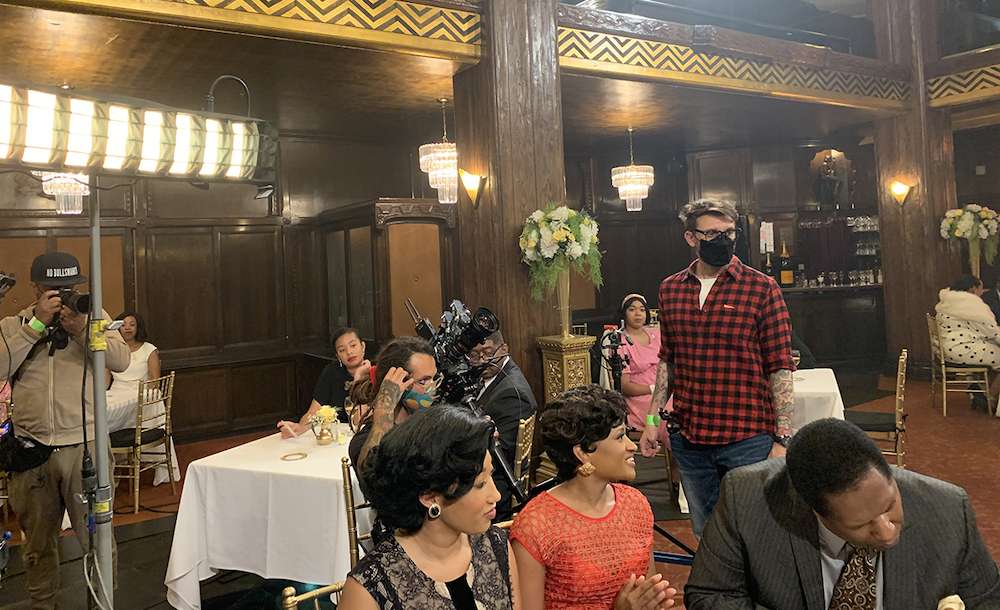 E5336 Aztec Gold is a beautiful colour that I used a lot in this movie. Every time I would light with this colour, everybody would exclaim how beautiful it made our backgrounds and skin tones look. I am very familiar with this gold colour because I am from South America and Latin American culture is very influenced by the Aztec civilisation. In one scene, we were shooting a huge concert with 150 extras inside a ballroom. The ceiling and the architectural details inside the hall were all painted in gold in accordance with the 1940s style. I set our SL1 MIX fixtures to E5336 Aztec Gold with 20% saturation at 3200K to bring the gold colours in the ballroom to life. 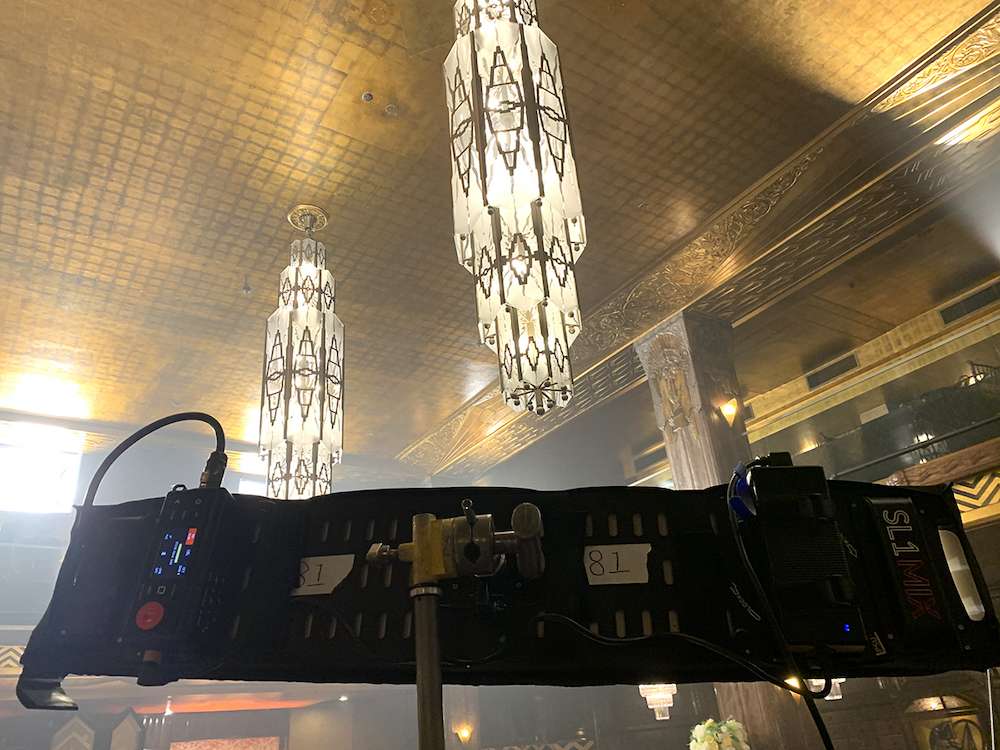 I also used our powerful Maxi Mix fixtures to illuminate our night exterior shots and push light through the windows of our nighttime locations. To recreate the sodium street lighting of the 1940s and 1950s, I selected E652 Urban Sodium in Gel Mode. In the scene shown below, for example, I set the Maxi Mix to E652 Urban Sodium with 10% Saturation at 3200K to reproduce a streetlamp effect coming through the window. I also created some diffused lighting between the two actors using an SL1 Mix at 3200K and a double diffusion frame. 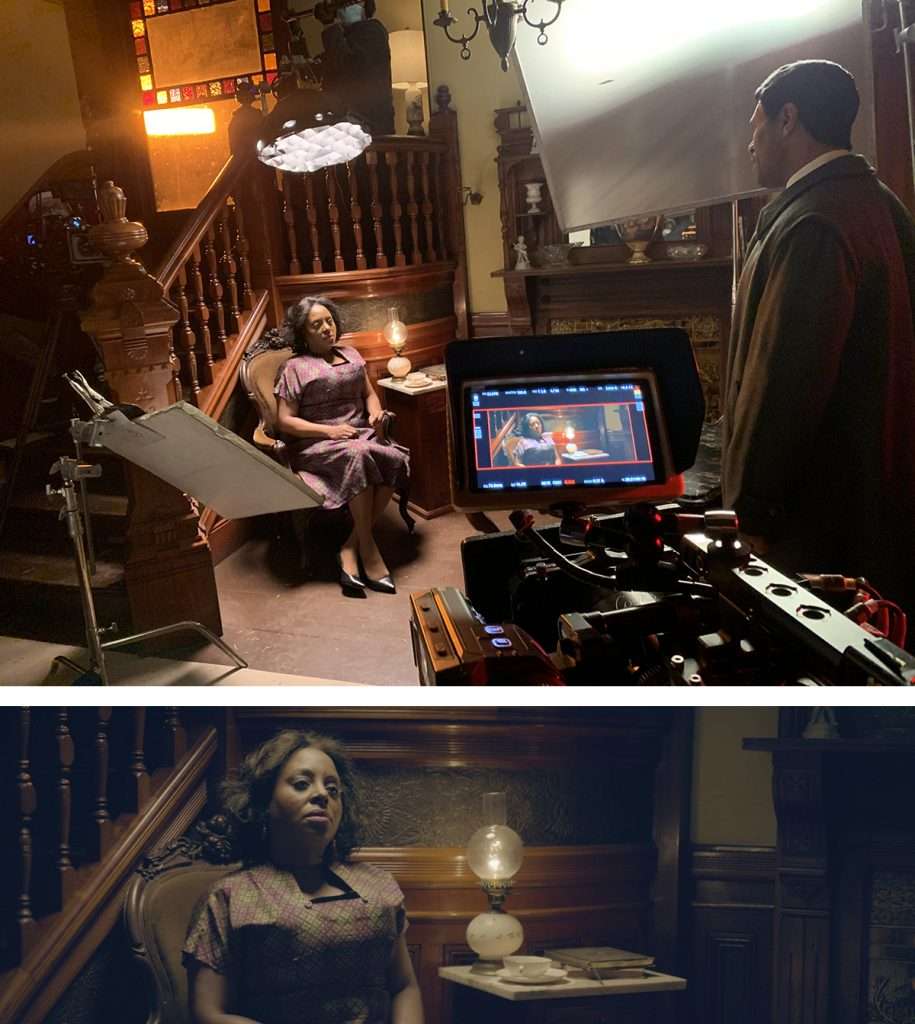 The clip below is another example of how I used the Urban Sodium colour from our Maxi Mix to create street lighting for a nighttime exterior scene. I combined it with a MINI Mix as a backlight to create highlights on the car, and an SL1 Mix set to R61 Mist Blue. I think Mist Blue is a beautiful colour for night scenes. In fact, all of the night scenes in this movie were lit with this colour from our DMG Mix fixtures. It feels like moonlight filtered through a mist. It’s a very desaturated and soft blue, ideal for creating atmosphere or for adding a hint of blue into windows or onto the skin tones of the actors.

One of the most important aspects of this movie was lighting diverse skin tones. Most of the characters in this feature were African American, which opened a whole new world of opportunities to me. I like working with darker skin tones. I grew up in a city with a mostly dark-skinned population, so for me, this was a very natural situation that I felt close to and was comfortable doing. 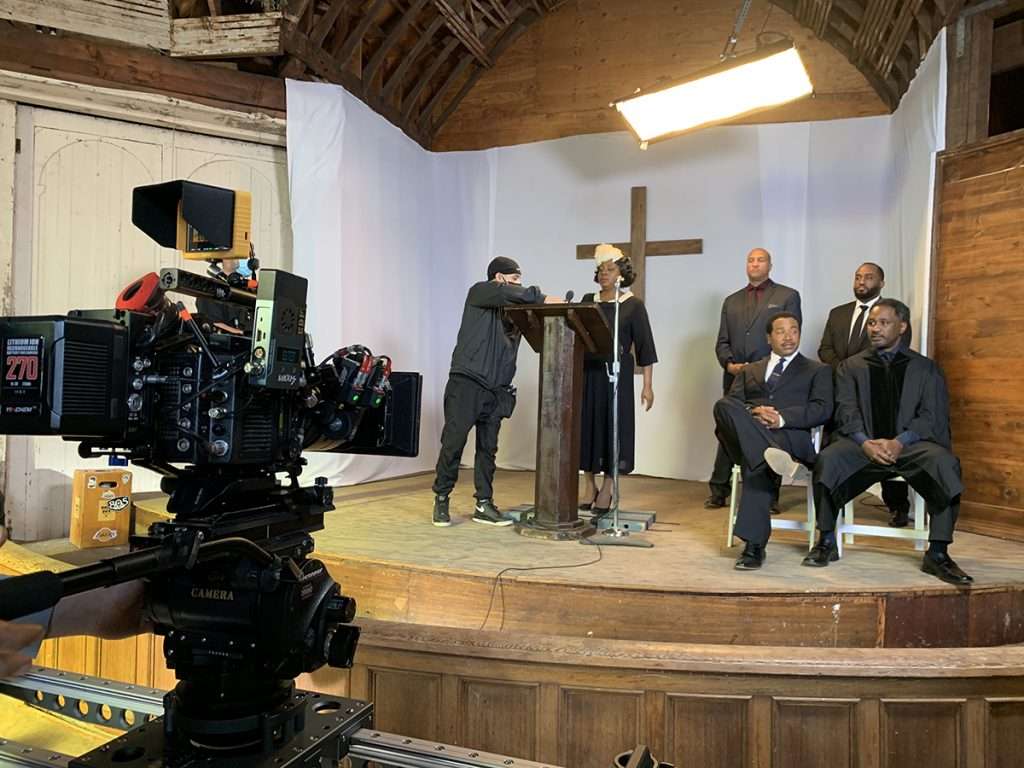 It was imperative to create beautiful lighting that would respect everyone’s skin tone. I used DMG Mix lights because I find that they have the most accurate colour rendering available. They have a great light output and the quality of their LEDs is amazing. The DMG Mix fixtures provided me with so much control of the colour, the power, and the quality of light on this film that they enabled me to light every actor in the best way. For example, I used R321 Soft Golden Amber with 20% saturation on a Maxi Mix to effectively light both the Mahalia Jackson and Martin Luther King characters inside our Hattiesburg Baptist Church set. 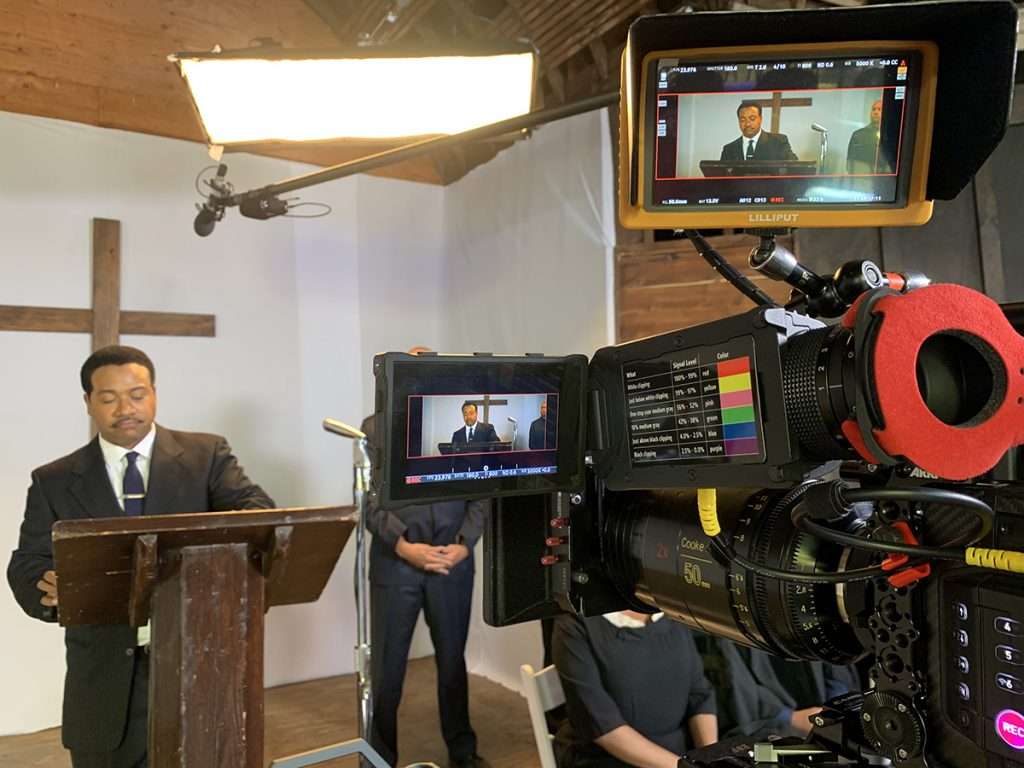 Oftentimes I had to light actors with very different skin tones in the same shot. One of the most important scenes in the movie occurs inside a German radio station where Mahalia Jackson is interviewed about her life. I needed to create lighting that would respect both the main character’s dark skin tone and the interviewer’s white skin tone. 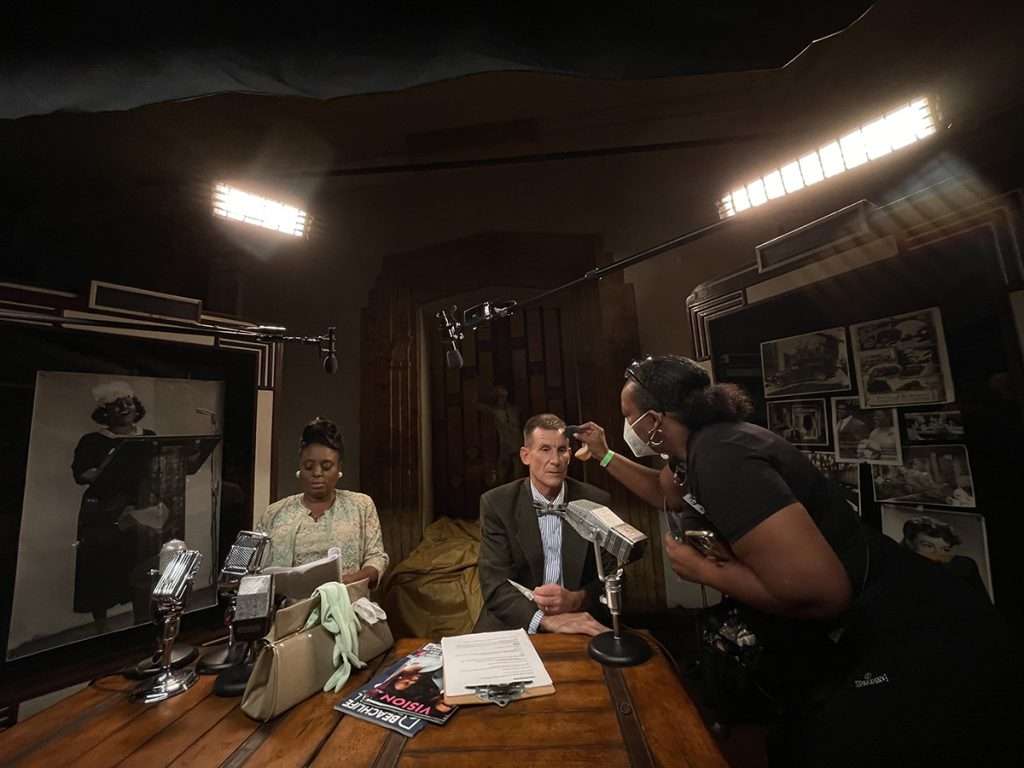 This scene was lit using the entire family of DMG Mix lights – from Dash to Maxi. The colour rendering of our Mix lights enabled me to accentuate both actors because I was able to select a colour that respected both of their skin tones. I was able to easily configure all of the fixtures to the same colour – R303 Warm Peach at 10% Saturation and 5600K. This created a colour that wasn’t too warm, but warm enough that it enhanced both skin tones perfectly. 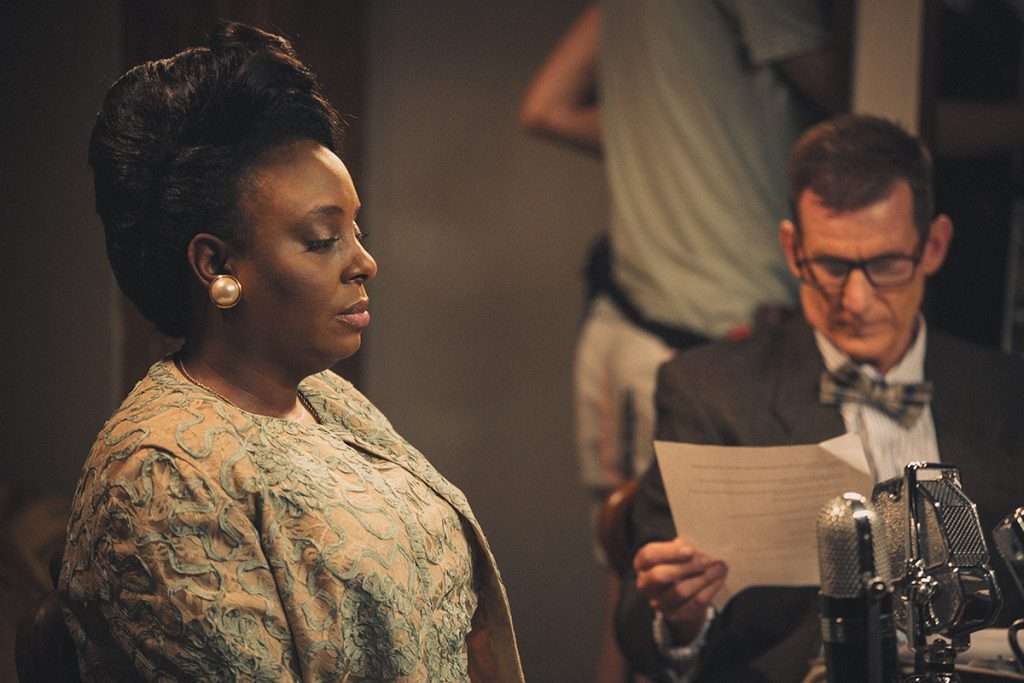 I was very happy to have the full family of DMG lights for this project. The powerful Maxi Mix was great for exterior lighting. I used the SL1 Mix for backlighting and side lighting because its larger size enabled me to cover two or three actors in the same shot. The compact size of the Mini Mix made it a great choice for close-ups or medium shots. And I always carried a DMG Dash in my pocket or backpack.

An SL1 MIX in Gel Mode, set to R16 Light Amber, to create a warm accent light for a closeup shot.

I love the colour rendering of Rosco’s DMG Mix lights. They enable me to create amazing colours that help me convey the psychology of a character and create an atmosphere for the story. I used all the fixtures’ available colour modes and I controlled everything through the myMix app. My gaffer Oliver Kompst and the set lighting team also found the DMG Mix lights to be very easy to control via their DMX console. 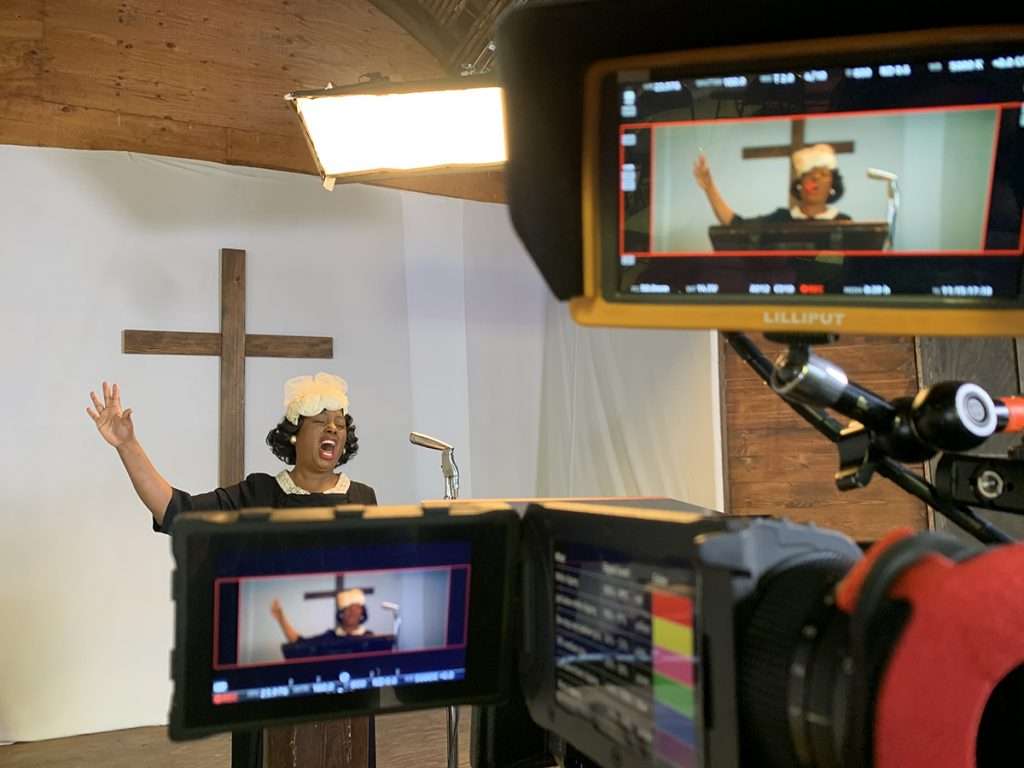 Another great feature of the DMG Mix lights is that they don’t make any noise, which was very important for a film like this one with so much singing. Many of the musical scenes were recorded live on set, not in a studio, so everything needed to be completely silent. I was able to use a MINI Mix to shoot close-ups of Ledisi singing without any complaints from the sound department. 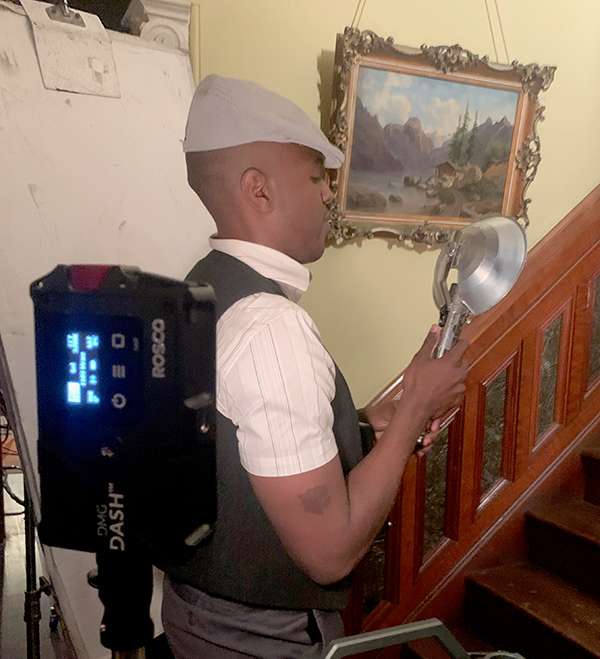 And then there was Dash. It seems like I was always pulling out a DMG Dash light to create an engaging glimmer in the eyes of a character, add a little bit of light onto a table, or raise the overall light level of a scene. Depending on the needs of the shot, I used it with the Dome, the Flat Diffuser, or the Eggcrate. I also loved how I could easily mount it on a light stand or get more creative with its placement using the Magnet Mount. But what I appreciated most was how DASH configured with my other DMG Mix lights to create the same colours. 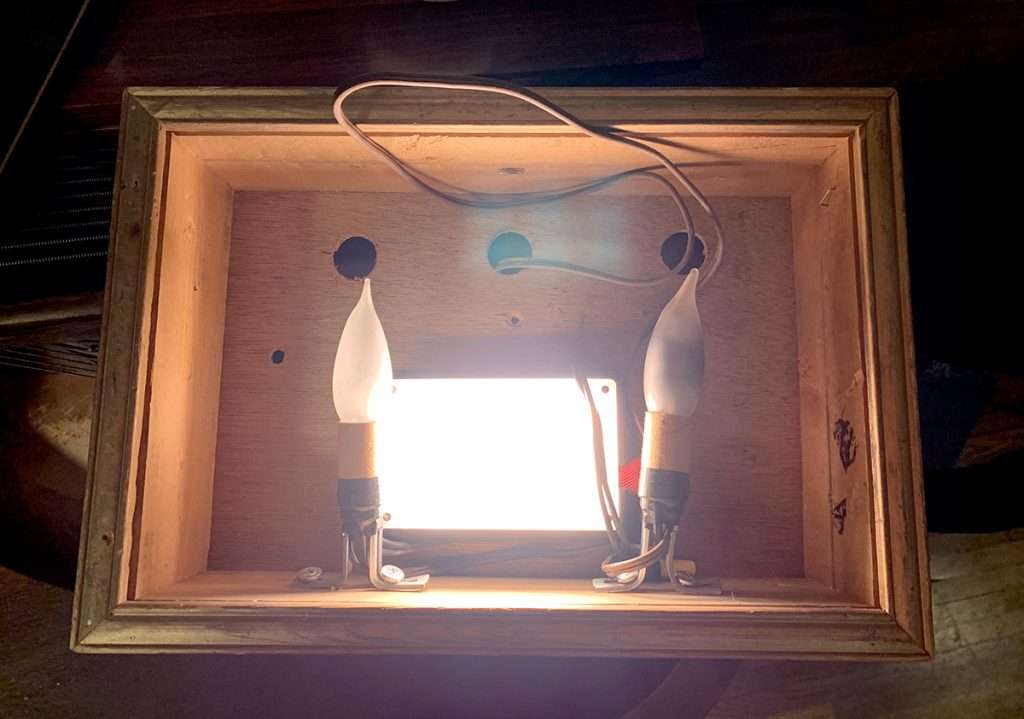 A DMG DASH is used to backlight a dressing room sign

I work fast – and Rosco’s DMG Mix range of lights are the only fixtures I know that can keep up with me. Whether it was their size or their easy-to-use controls, Rosco’s range of DMG Mix fixtures allowed me to work incredibly fast, which is very important when you have limited time on set like we did on this production. 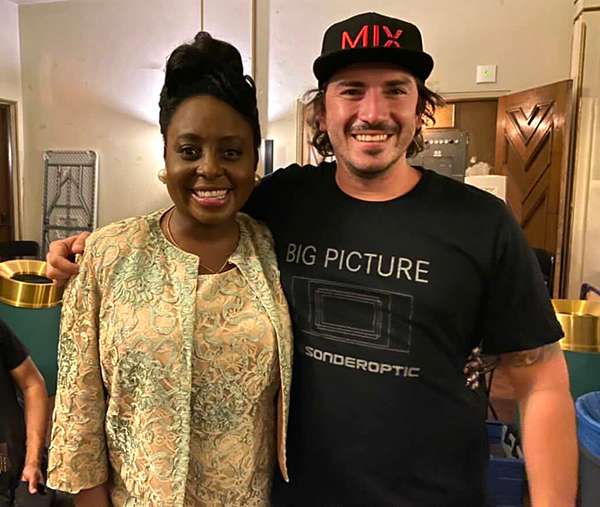 Eduardo Ramirez poses with Ledisi as Mahalia Jackson on set.

I have been working with Rosco’s DMG Mix lights for three years now. They have become an indispensable tool for me. I know how to use them to create the different tones and colours that I need. I was thankful to have them on the set of Remember Me: The Mahalia Jackson Story.