Ikegami reports ongoing broadcast and professional media innovation throughout 2022 with a continuing transition from HD-SDR to UHD-HDR across the EAME markets and worldwide. Ikegami innovations announced during the year included the Unicam UHK-X750 IP-capable UHD HDR HFR camera plus the R2 Real Remote production system.

“The transition from SDI to IP technology continues to gain momentum for studio and field applications, given the greater system flexibility and easy expandability of IP,” adds Alan Keil, vice president and director of engineering at Ikegami Electronics (USA), Inc.” HFR shooting is additionally in strong demand, especially for slow-motion coverage of sports.”

A highlight of Ikegami’s exhibit at the April 2022 NAB Show in Las Vegas and September IBC in Amsterdam, the UHK-X750 IP-capable 4K-UHD HDR HFR full studio camera offers all the advanced capabilities of Ikegami’s flagship Unicam UHK-X700 except those that apply to portable shoulder operation. Distinguishing features include a lower centre-of-gravity and easier field staging with a large telephoto lens, compared to a portable camera.

The new model delivers the optimum weight balance for operation in combination with a large lens. It also features a greater design emphasis on ease of service and cool operation. The camera’s low body height brings the accompanying VFL-701D viewfinder closer to the optical axis of the camera. Incorporated into the optical front end of the UHK-X750 are three 2/3-inch CMOS UHD sensors with a global shutter to minimize artifacts when shooting LED screens or scenes illuminated with flash or strobe lighting.

Full HDR/SDR support is included plus the ability to choose between BT.2020 and BT.709 colour spaces. High-frame-rate shooting at up to 2x speed in UHD or up to 8x in HD via the base station is possible as an option. Five neutral density filters (clear through to 1/64) and four chroma filters (3200, 4300, 6300 and cross) are included plus provision for an optional optical low-pass-filter to minimise moiré effects when televising subjects such as LED video walls.

Ikegami’s R2 Real Remote production system, announced at InterBEE 2022, allows highly efficient remote camera operation between the studio and the sub-control room as well as ensuring social distancing and studio crowd avoidance when necessary to guard against infection, particularly in close-up sequences. It is designed for use with cameras such as the compact full broadcast quality UHD/HD Ikegami UHL-43. Support is provided by a six-axis programmable articulated robot arm mounted on a motorised pedestal. This combination allows fast changes in camera height from a 400 to 2,350 mm above floor level.

Integral automation enables precise control of camera motion. Individual or simultaneous changes in the angle of view can be captured live and stored as a preset. Camera and support movements can be reproduced directly from stored memory. Multi-vector motion sequences can be achieved smoothly, quietly and fully remotely under timeline-based control. Forward, backward, sideways and height parameters can all be rehearsed, stored and adjusted, including bird’s-eye views. Motion data can be entered via a graphic user interface and real-time or recordable joystick. A viewfinder in the GUI displays the incoming video. Occupying just 1,100 mm in pedestal width and depth, the R2 is much more compact than a traditional studio crane and can be relocated easily from one studio to another. 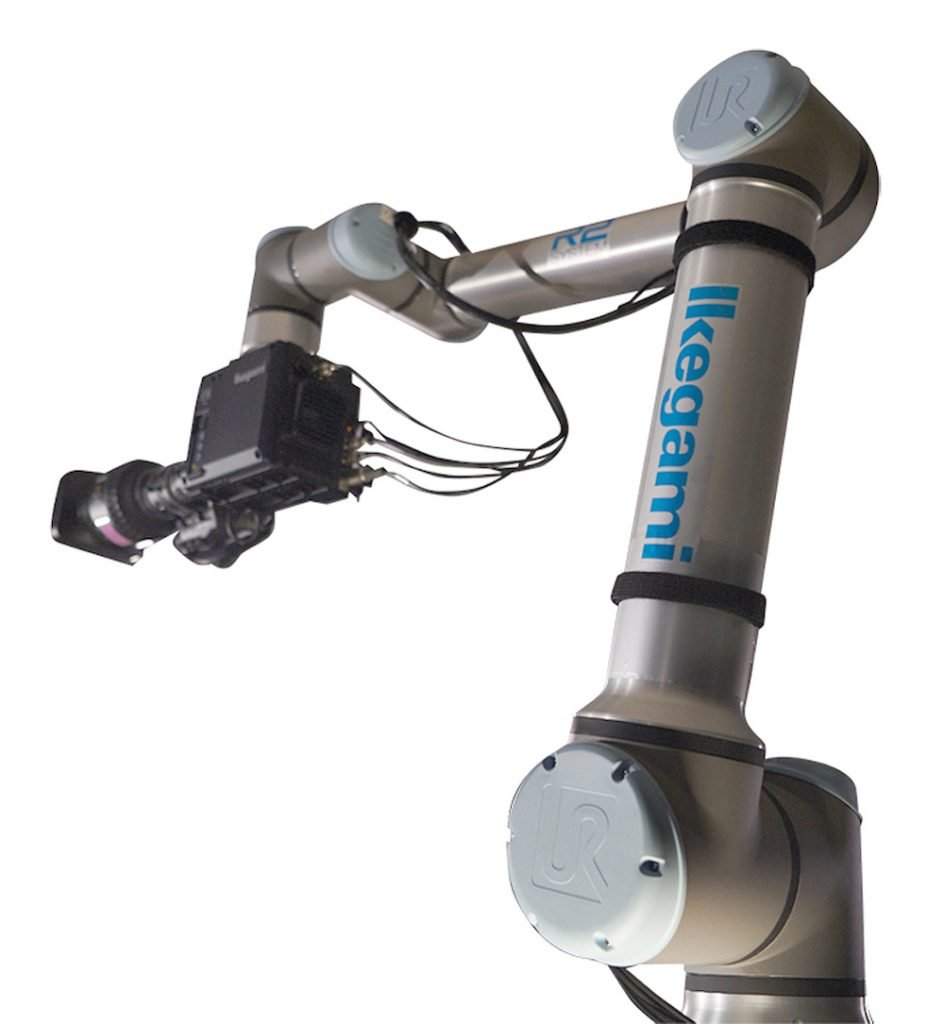 2022 sales highlights included Ikegami camera systems for a new studio and IP-linked production control facility at the ICE Kraków Congress Centre in Poland. This is equipped to allow high-grade television coverage of events ranging from corporate presentations to large-scale conferences, exhibitions, concerts and spectator-sports. System design and installation were coordinated by Shadok AV Group which provides a wide range of broadcast-related services from its base in the southern Polish city of Zabrze.

Thai Parliament Television (TPTV), the national assembly radio and television broadcasting station of Thailand, invested in eight Ikegami UHK-430 camera systems for use at the recently completed Sappaya-Sapasathan parliament house in Bangkok. UHD was a crucial requirement. Another was the need for IP connectivity, targeting future expansion. Ikegami UHK-430 cameras incorporate three 4K native sensors which allow them to capture content at very high quality. In addition to its 4K performance, the CCU-430 camera control unit has an IP interface. Plugging in an optional MoIP board makes IP network connection possible.

Little Bay Broadcast Services LLC, one of New Hampshire’s leading broadcast system integrators, chose Ikegami UHK-X700 cameras for a television studio upgrade on behalf of a major corporate client. Three cameras plus control equipment, viewfinders, lenses and teleprompters were ordered for use in broadcast-grade content production and webcasting. The customer is a long-time user of Ikegami cameras seeking new HD models with an upgrade path to allow future production in UHD.

Somoy Television, a news-based 24-hour television channel broadcasting nationwide across Bangladesh, chose Ikegami HD cameras and monitors for use at its studio headquarters in Dhaka. The investment forms part of the network’s transition from 576i SD to 1080i HD production and transmission. Somoy TV has operated successfully with Ikegami technology from the commencement of test transmissions ahead of its April 17th 2011 launch. An HL-65W SD camera became a core element of the studio’s production resources. Impressed by the quality and robustness of the equipment, plus the high standard of support provided by Ikegami and local distributor For-A India, the channel was fully confident in selecting Ikegami HD cameras and monitors. The new purchase includes 10 Ikegami HDK-73 HD camera systems, 14 HLM1760WR HD monitors and two sets of HLM2460W HD monitors.