Welcome to The Industry Lens, our monthly round-up from over the water! Michael Goldman gets some frank comments from Hoyte van Hoytema FSF NSC ASC about getting Tenet on to the big screen – plus news about remote working, green energy vehicles, new lighting controls and a happy 50th anniversary!

“I’ve never met a computer or TV screen that shows films the way they were shot and intended.” 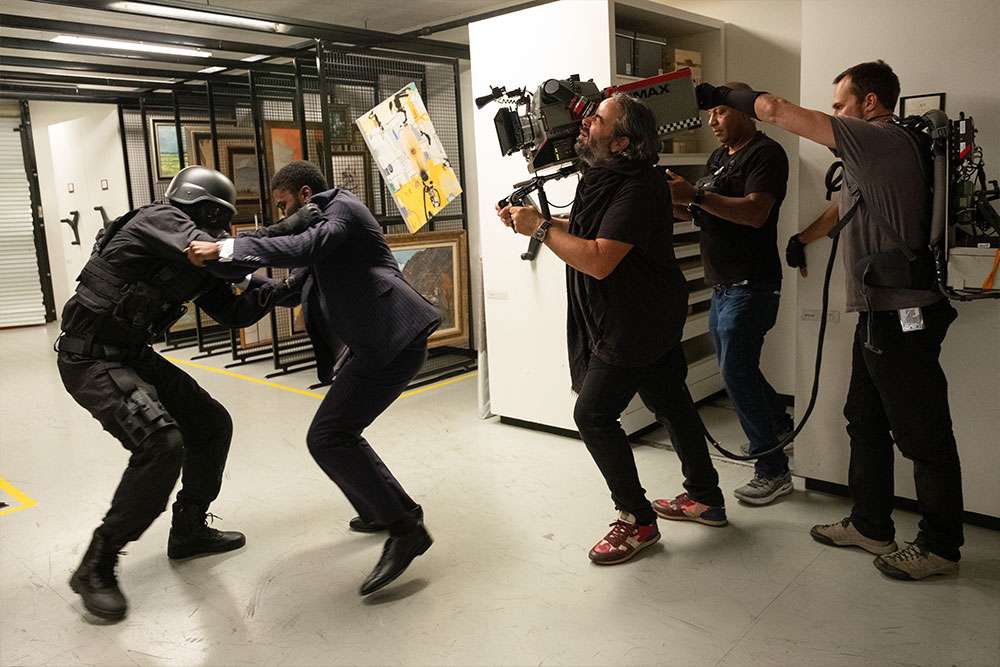 The rollout of director Christopher Nolan’s sci-fi/action IMAX thriller Tenet has to be one of the most unusual in modern cinematic history, thanks to its arrival at precisely the same time the Covid-19 pandemic began ravaging the globe and, among other things, shutting down cinemas.

As a result, Warner Bros. postponed its summer U.S release before arranging an international rollout in select territories, and eventually, in the US, an even more limited IMAX or 70mm theatrical and pop-up drive-in rollout, where feasible.

At press time, the studio was debuting 4K Ultra HD and Blu-ray sales of the film in the U.S. for those eager to finally see it at home. However, routine streaming of the movie for wide home viewing remained, as of press time, off the table at the insistence of Nolan. 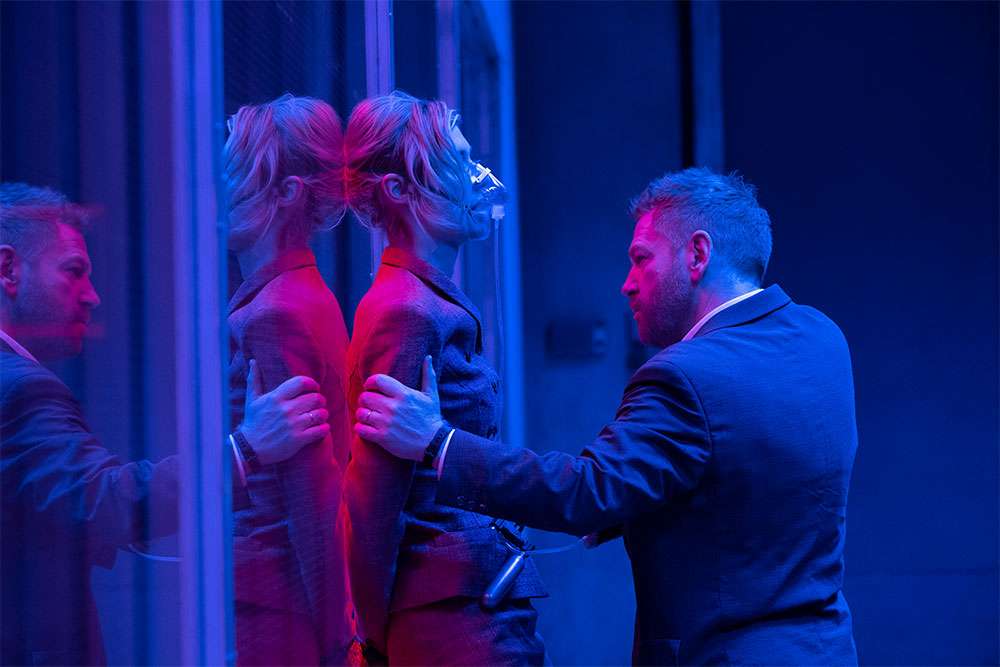 Indeed, Nolan recently publicly excoriated his own studio – Warner Bros. – for its recent decision to release upcoming theatrical films simultaneously in available theaters and on its HBO Max streaming service as, essentially, damaging to a filmmakers’ right to have their artistry seen as creatively intended, and to the future health of the cinema business.

“There is something diabolic in using this pandemic to overthrow a widely-appreciated branch of entertainment, trading it for something… slightly shittier!”

Tenet was not among the films listed as coming to HBO Max any time soon, but his larger point was that the on-going damage to the cinematic exhibition experience could end up permanent, beyond the pandemic, and thus hugely damaging to filmmakers and their art.

Nolan’s friend and cinematographer, Hoyte van Hoytema FSF NSC ASC has equally strong feelings about this paradigm, and the irony of work lovingly crafted for the giant screen being eventually limited to smaller screens for most viewers.

I recently caught up with Hoyte, who also shot Nolan’s previous big-screen epics, Interstellar (2014) and Dunkirk (2017). He had plenty to say about how the business and the art of cinema are intersecting with the current pandemic-ravaged landscape. 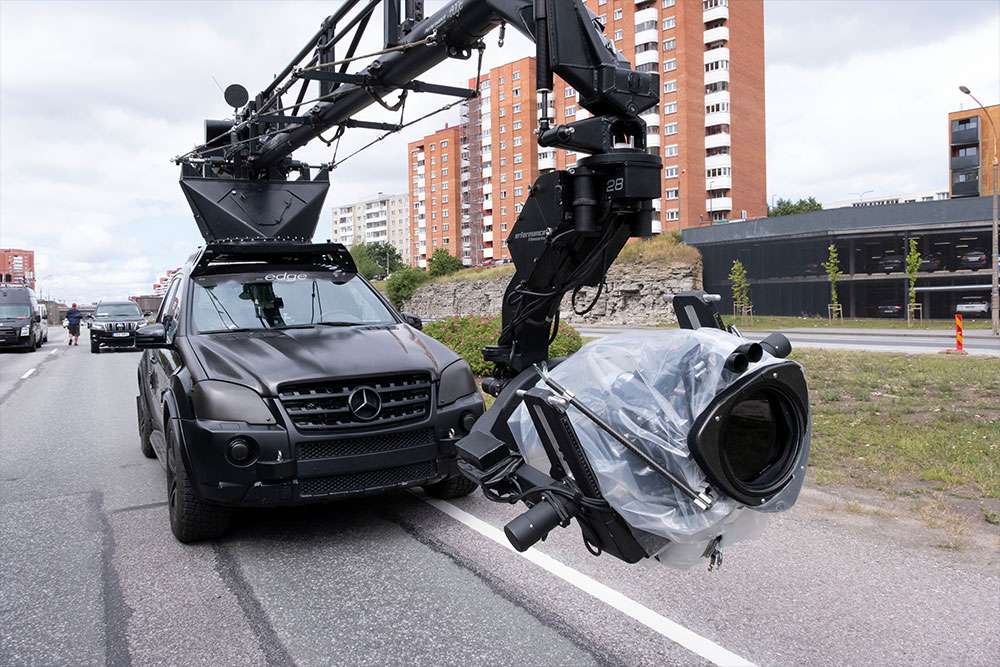 “I think the decision of when to roll out a film in a cinema, whether it’s safe or not, is not a decision for filmmakers, but rather, for epidemiologists and legislators,” van Hoytema says.

“But we filmmakers need to focus on what we do best – making films and making sure our platform survives as well as we can. We have to keep pushing so that when we come out the other end of this pandemic, we still have a theatrical industry left. Sometimes, that might mean one has to wait. Sometimes it might mean having to be very proactive by trying to open the film in cinemas wherever the law allows it.”

Thus, van Hoytema declares, “It was a huge surprise to me” that Nolan’s aggressive push “to let Tenet live exclusively in theaters was under big scrutiny. The most important thing he did was to make sure his film was ready for the theatrical experience to shield it from going to streaming too early, and protecting the effort of his crew, as well as the exhibitors.

“We want to go back to cinemas one day in the close future, and to do that, we have to put good value into our assets, and not flog it for peanuts at discount prices hastily. We have to give theaters something to look forward to, and reserve a competitive edge for them.” 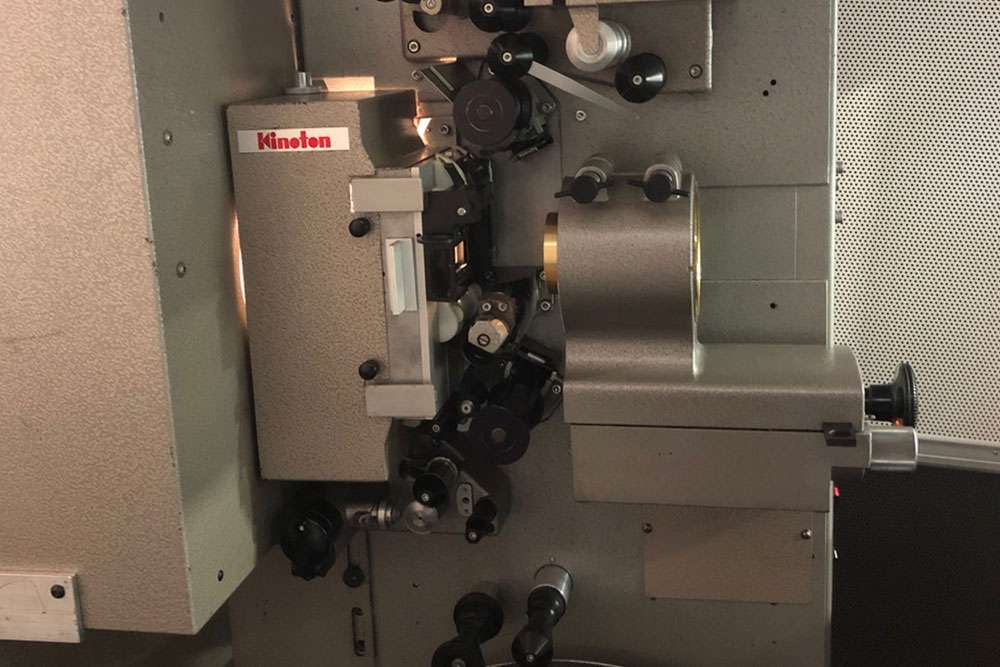 And so, van Hoytema joins Nolan in declaring that it is important for filmmakers “to keep making films for cinemas exclusively, both in quality and quantity.”

And Tenet certainly has plenty of “quality and quantity” to it. Nolan conceived the project many years ago before finally shooting it in 2019 using a 250-strong crew on stages in the U.S. and locations throughout Denmark, Estonia, India, Italy, Norway and the UK. And, he filmed it in a way that made it the largest and most complex project van Hoytema says he has ever been involved with.

Indeed, the movie was filmed with a strategic combination of 70mm and IMAX cameras with specially-configured Panavision lenses, among others, and a range of unique techniques designed to permit the filmmakers to shoot the story’s so-called “time inversion” sequences often twice, both forward and backwards. That was necessary for key sequences when time essentially moves backward. The project is also filled with filmmaking extravaganzas like crashing a real airplane into a building, monstrous explosions, and humungous battle scenes, among other sophisticated visual delights.

Pulling it all together was, van Hoytema says, “the most complicated” job of his filmmaking career – all planned to create a strategically unique large-screen viewing experience.

“We traveled with six IMAX camera packages, a Panavision Large Format System 65 package, and an ARRI 65 package as a base,” van Hoytema says. “Additionally, we carried a Logmar Magellan 65mm prototype camera with us. The folks at Logmar were able to use our production resources to finalize their engineering and, in return, we got to shoot several scenes of Tenet on this completely new, from-the-ground-up built and designed camera.

“Also, a big variety of our primary lenses were tweaked, built, or customized by Dan Sasaki (Panavision VP of optical engineering). We also brought Edge camera arms to several countries to be placed on cars and boats. We carried a variety of remote heads, Alpha head systems, and some self-built remote systems, in addition to working with local rental houses around the world.

“But what excited me the most was that we were able to travel with a Kinoton 70mm 5-perf projector and a Sondor 35mm projector to watch dailies. Every new location we got to, our projectionist Lucien Nunes would set-up essentially a small cinema to watch our rushes that were being transported to and from FotoKem in Los Angeles.”

Making the film was an adventure van Hoytema will never forget, and he’s particularly proud of the work. But as the pandemic drags on, the exhibition industry continues to suffer. Movies like Tenet struggle to be seen as artistically-intended, and studios start making the kinds of difficult distribution decisions that so recently upset Nolan and other filmmakers – and the cinematographer continues to worry where this paradigm will end up.

In particular, the direction of the impact of recent events on the movie business has van Hoytema concerned about a range of political, artistic and business implications. 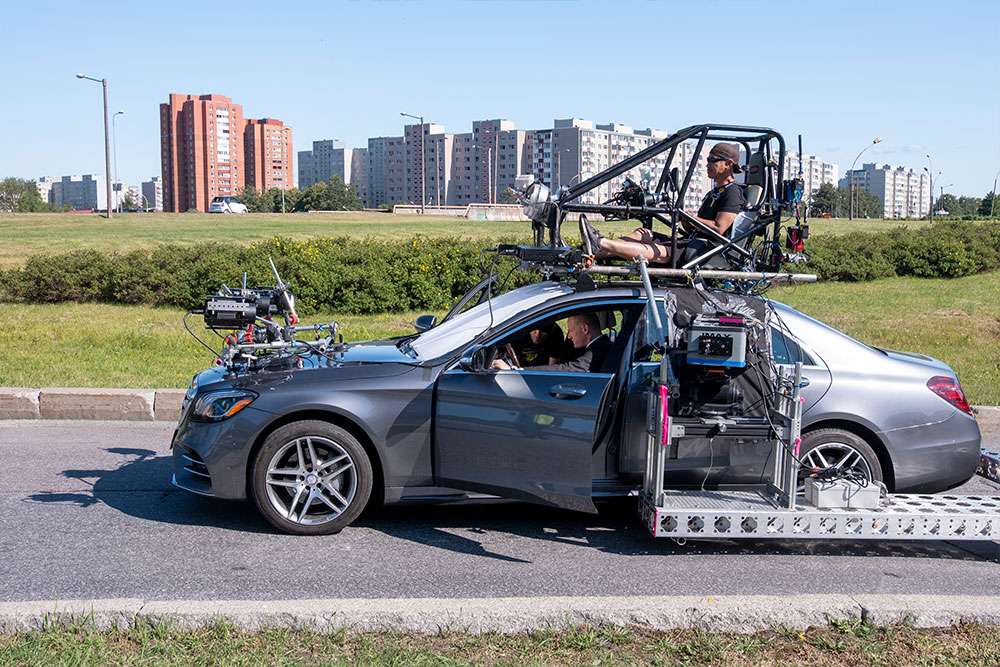 “In my mind, there is something diabolic in using this pandemic to overthrow a perfect and widely-appreciated branch of entertainment, trading it for something more easily accessible, yet slightly shittier,” he declares.

“Opportunism to lure people into paying more for worse, and selling that by making people feel they got lots for cheap is dangerous. It’s like fast food – cornstarch and sugary soda drinks from big buckets!

“Of course, it’s a disappointment, and cynical to see big film studios giving the finger to the people that gave them so much clout in the first place by not nurturing their theatrical branch with the respect the creators deserve. Hastily irreparable changes made in unprecedented times of crisis can lead to an opportunistic, dark and depressing decline in the mechanics of cinema and distribution, led by an obsession to sell as many data streams as possible over networks into people’s homes.

“In the bigger picture, in my opinion, the obsession with the quantity of data and the territorial imperialistic inclination related to that is very destructive and fascist. I think we look enough at the small screens surrounding us in our daily lives, so maybe it’s time to go out and marvel at bigger, more beautiful things with other people next to us. I’ve never met a single computer or TV screen that shows films the way they were shot and intended. There is always a lot of compression, as well as an immeasurable amount of TV settings that will make even untrained toes curl up.”

All of which is why van Hoytema firmly insists “there is nothing like the visceral IMAX experience – not even close.” And, he adds, this is why it’s worth it for artists like Chris Nolan and others to speak out on such matters right now, even in the midst of a pandemic that has altered the terrain.

“There is something icky to me about referring to people’s blood, sweat, tears, and labor in the way-too-often-used term, ‘content,’ ” he says. “Fill a well with it, sell it at discount prices, make people believe they got a bargain, and yet at the same time, to do that, you have to trample over the very essence of what makes most cinema great – the interaction between a filmmaker and their audience.”

Among the recent solutions announced by the company is Outpost Remote Control (RC) – an updated version of the company’s Outpost near-set dailies solution that permits Light Iron dailies colorists to have long-distance control.

The company says this update to the Outpost system was spurred by the industry’s need to quickly adapt workflows to new remote conditions imposed by the outbreak of the Covid-19 pandemic.

Light Iron also announced an expansion of its offline editorial rental operation in the New York area; the resumption of in-person client hosting in select locations following a strict series of new safety protocols, which you can learn about here; and the hirings of three new executives to its senior leadership team—Seth Hallen (co-managing director), Phil Harrelson (VP of operations), and Laura Browosky (director of business development). 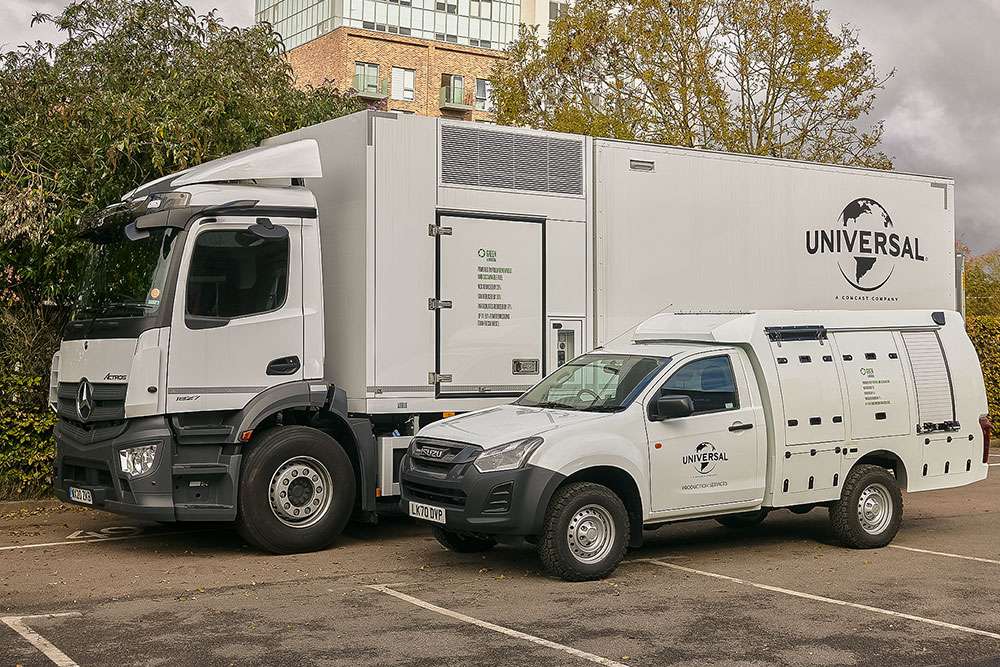 Cineo Lighting, an NBCUniversal subsidiary, has debuted a new C20S control system for its LB800 lighting fixture, a tool designed with multi-zone technology to allow the creation of dynamic motion lighting effects.

Congratulations: Happy 50th Birthday to the Matthews Studio Equipment of Burbank. The veritable company, a longtime supplier of set gear around Hollywood, and holder of three Scientific & Technical Awards from the Academy of Motion Picture Arts & Sciences, invented the first foldable and collapsible C-stand for film sets, now among its catalog of over 2,000 products.

The company recently produced a cool video about its history and innovations you can see below:

And finally… congratulatuions also to veteran editor Mary Jo Markey, ACE, who was recently named Artist In Residence for the mid-January 2021 Manhattan Edit Workshop. A 40-year industry veteran, Markey edited 2016’s Star Wars: Episode VII – The Force Awakens, for which she earned an Oscar nomination. She also has three Emmy nominations and one Emmy win, for the 2004 pilot episode of the famed TV series, Lost.

Michael Goldman is an award-winning, veteran industry journalist and author based in Los Angeles who specializes in covering filmmaking, cinematography and the art, technology, and people of the content creation world. He’s the author or co-author of eight books with another on the way, a longtime contributor to American Cinematographer and CineMontage magazines, author of the SMPTE Newswatch newsletter, former Senior Editor of Millimeter magazine and a former Variety editor, as well. You can learn more about Michael and his work at his website, www.hollywood-scribe.com.

Sky has announced that Noel Tovey has been appointed to the role of managing director at Sky Studios Elstree, Sky’s brand-new state of the art film and TV...