Rosco Ambassador Torben Wenneberg is a Danish gaffer with over fifty television series, short films, and documentaries under his belt. His most recent project was a holiday special for a major Danish television outlet. For this series, set in the 1800s, the filmmakers required fixtures that could reproduce the period lighting conditions of the past. The lights also had to set up quickly because the production involved children who, by Danish law, are not allowed to work more than eight hours a day on a film set. Below, Torben relates how he used every DMG MIX light – from the largest Triple Maxi Mix to the smallest DMG Dash – and why each light was perfect for each shot.

I used the Triple Maxi Mix Yoke to LINK three Maxi Mix lights together. This Triple Maxi Mix fixture was great for creating soft fill on exterior locations because of its high output. On dark, cloudy days it helped lift the exposure as needed. On sunny days it enabled us to put some edges on the shadows. This was especially helpful while shooting our train scenes. The train blocked the sun from the actors, so we mounted the Triple Maxi Mix behind the scene, next to the Chroma Key butterfly. It created a very nice reflection on the train that brought it to life. 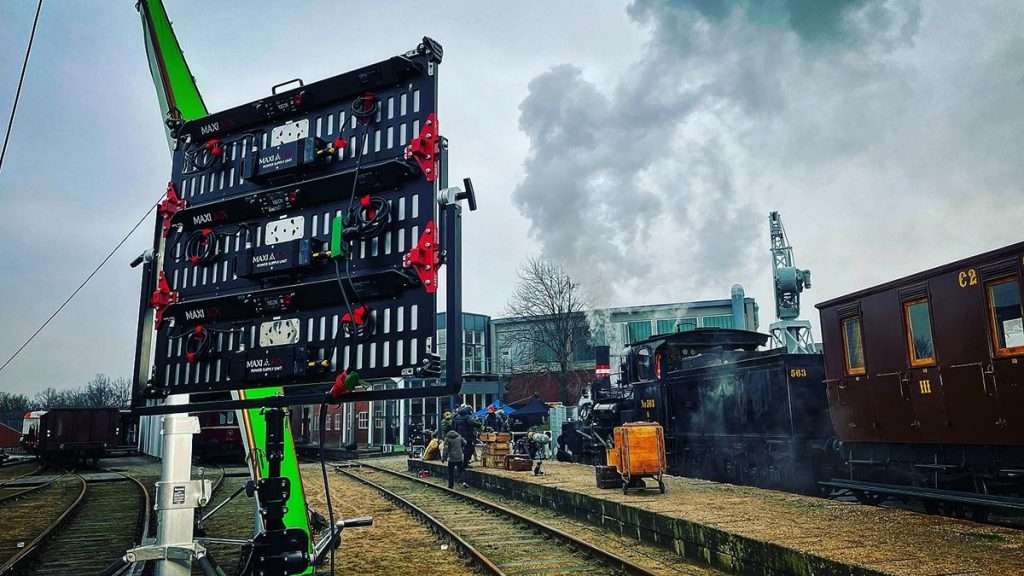 The Triple Maxi Mix is such a handy powerhouse of a light. I love being able to have three Maxi Mixes deployed individually for one scene – but then being able to gang them together for extra power in another. The ability to control all three Maxi Mix units as one light using the myMIX app or via DMX/CRMX is also very handy. The lights are lightweight and easy to put together, which saves time and crew. This was especially important on this project where we were shooting seven to eight pages in an eight-hour day. It is fast and versatile – I love it.

We didn’t plan to use any lights at all for the exterior daylight shots, only blackout frames for negative fill and maybe a small bounce board for the eyes. However, the winters in Denmark are often too dark to rely on the bounce boards only. So, we had a Double or a Triple Maxi Mix on standby most days we were shooting outdoors – just in case the clouds rolled in. In the scene below, we used the Double Maxi MixYoke to link two Maxi Mix lights together. Then we used the Double Maxi Mix fixture in an over-the-shoulder shot of the main character to illuminate the eyes of the villain facing him. 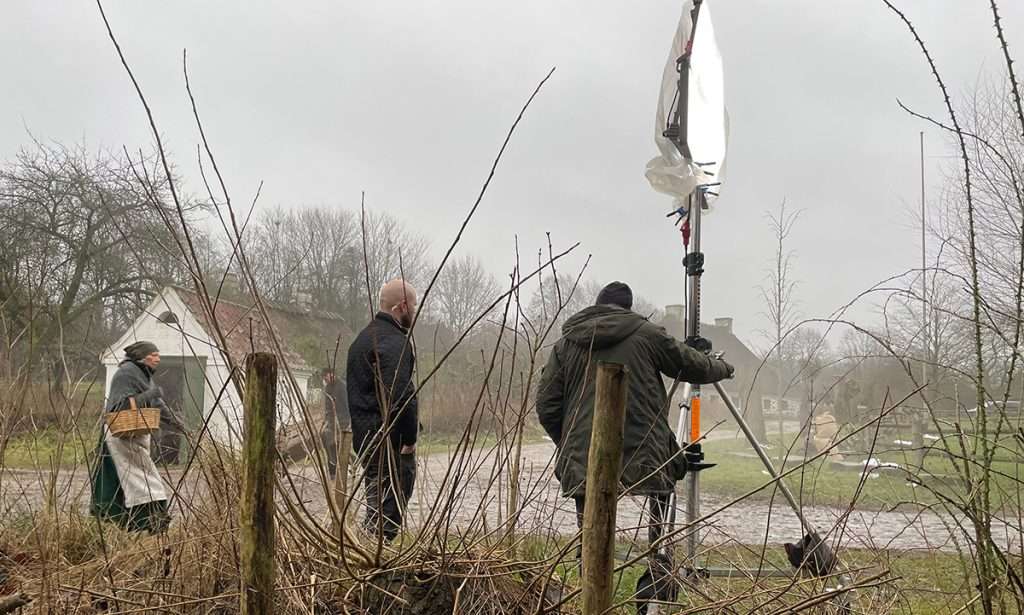 We also used Double Maxi Mix to create soft illumination in the interiors. In the main castle’s dining room, we were shooting a large table with ten actors. Again, we were still expected to shoot seven-eight pages in an eight-hour day, so simplicity was the keyword here. To generate a soft punch of light inside the room, we mounted a Double Maxi Mix on a lowboy with wheels, which enabled us to move it quickly around the table. We also used a 72×72 frame of diffusion to create a bit more softness, and the light bleed under and over the frame also created a little extra ambiance for the scene. 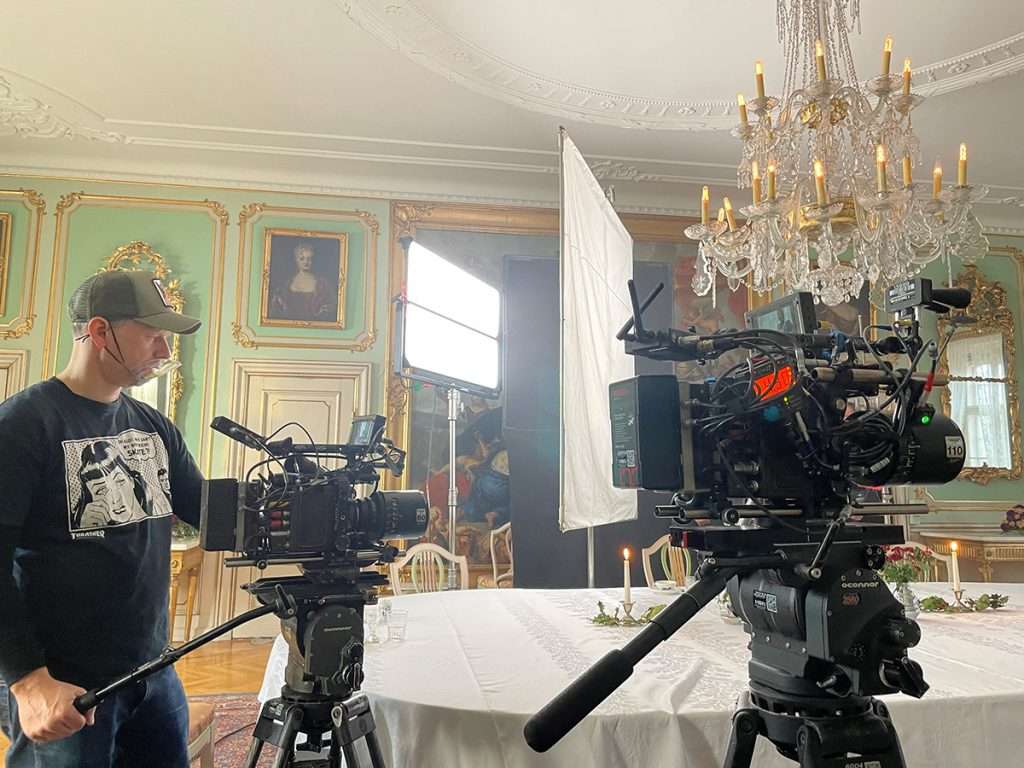 The scene below is one of our first days of shooting. During the fall in Denmark, the weather changes a lot throughout the day. In order to keep the windowlight constant, we mounted four Maxi Mix lights at 6500ºK on a pipe outside each window. This provided a nice, constant, daylight kick through the small 19th-century windows for some of our interior scenes. We also gelled some Par Cans with CTB to create some hard sunbeams. 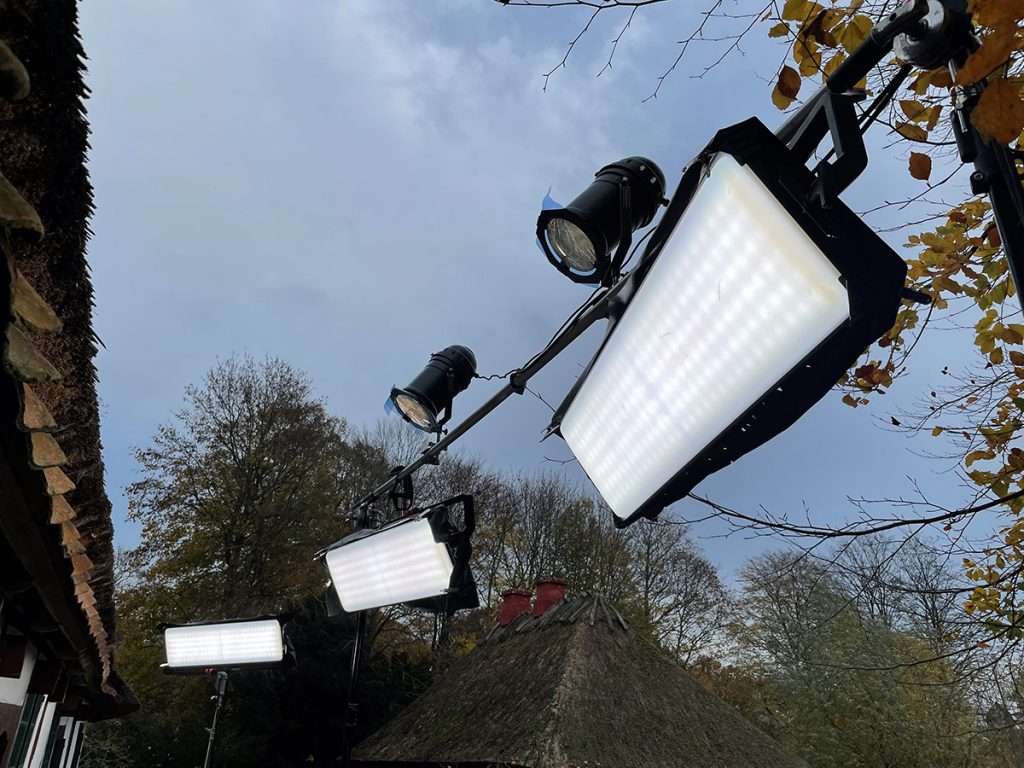 The individual Maxi Mix lights were also used to shoot the interior of a small caravan with tiny windows on the side and the roof. We placed some diffusion on all of the windows and mounted several Maxi Mix lights around the caravan. We used the myMIX app to produce different lighting conditions depending on where the camera was positioned. We also chased and dimmed the fixtures for a poor-man’s process effect to make it appear as if the caravan was moving. 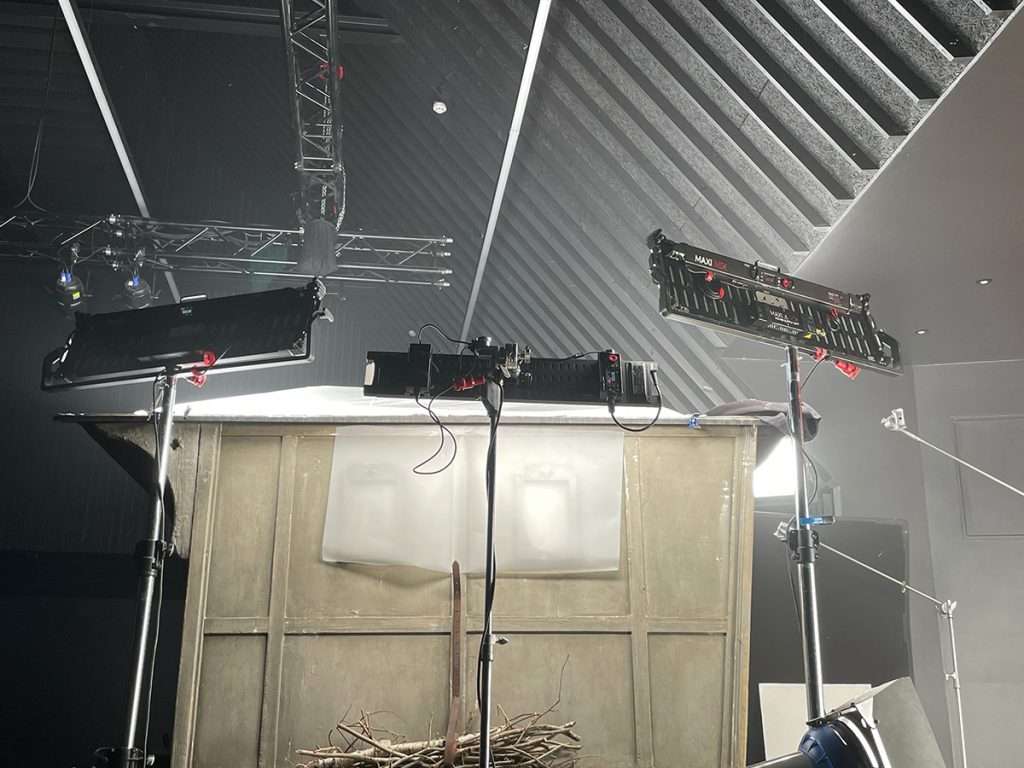 The SL1 Mix is such a versatile light. We used it in many different ways on this project. One way we used it a lot was to create fill light from doorways, windows, or as top fill. The scene below is the perfect example. We were not able to mount any lights outside the castle location to punch through the windows. So, we placed an SL1 Mix behind a 42×72 diffusion panel out of frame to re-create the light coming through the windows. We shot scenes that had the windows in-frame while the daylight was good, and used the SL1 Mix to light the scenes when we lost the light in the afternoon. 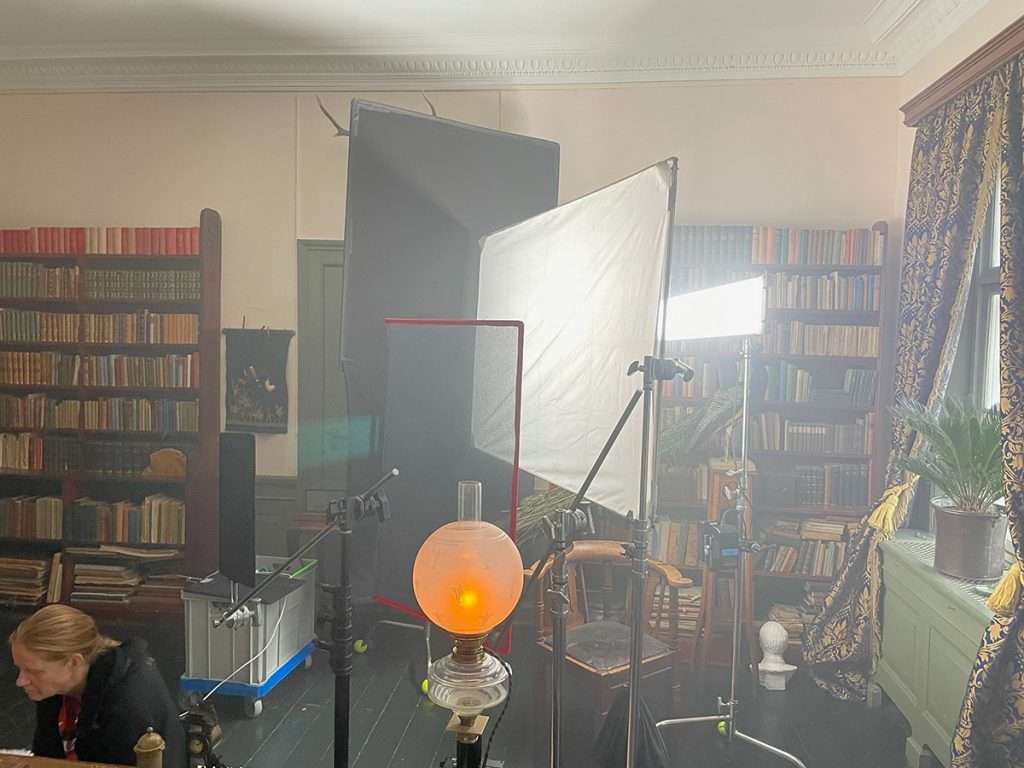 We also used the SL1 Mix light to create a warm soft light for our night exterior shots in the village marketplace. The great thing about both the SL1 Mix and the Mini Mix is that they can run on batteries – making them very portable. We could easily move the lights wherever they were needed, which is key for run-and-gun productions with two cameras and no time. 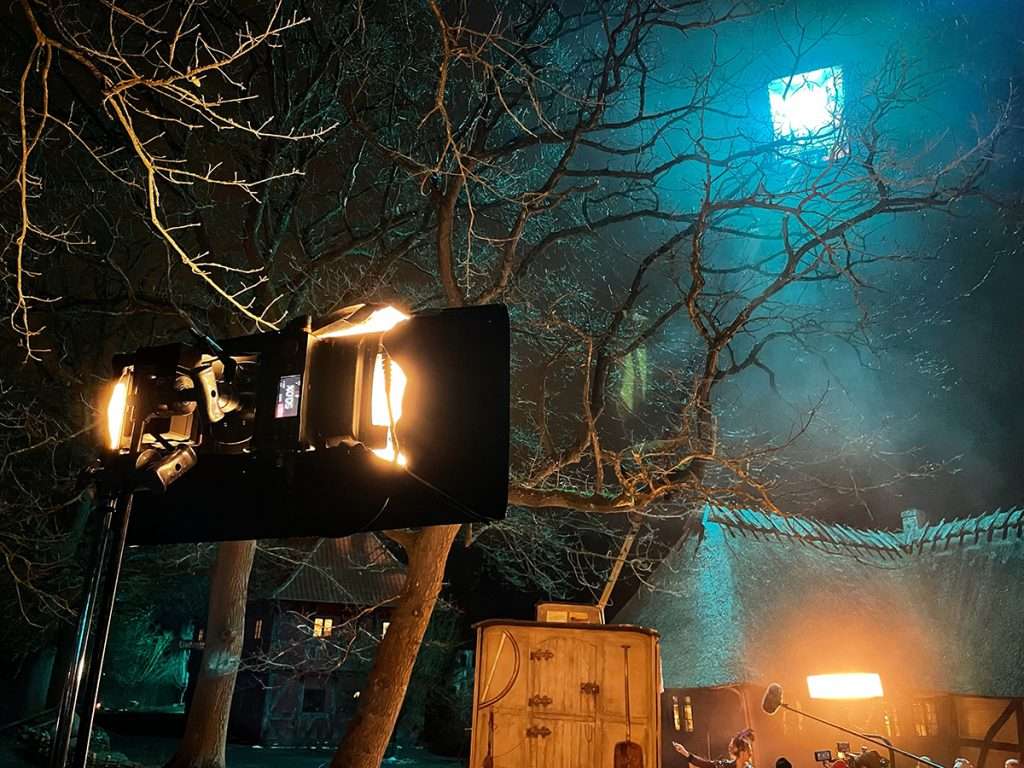 The SL1 Mix was great for lighting the green screen too. The script called for a scene where a train would be running fast through a Danish winter landscape. We set this scene up inside a train station and placed a green screen outside the windows of a motionless train car. We set an SL1 Mix into Green Screen Source Match Mode and used it to illuminate the green screen on each side of the compartment. It worked out great! 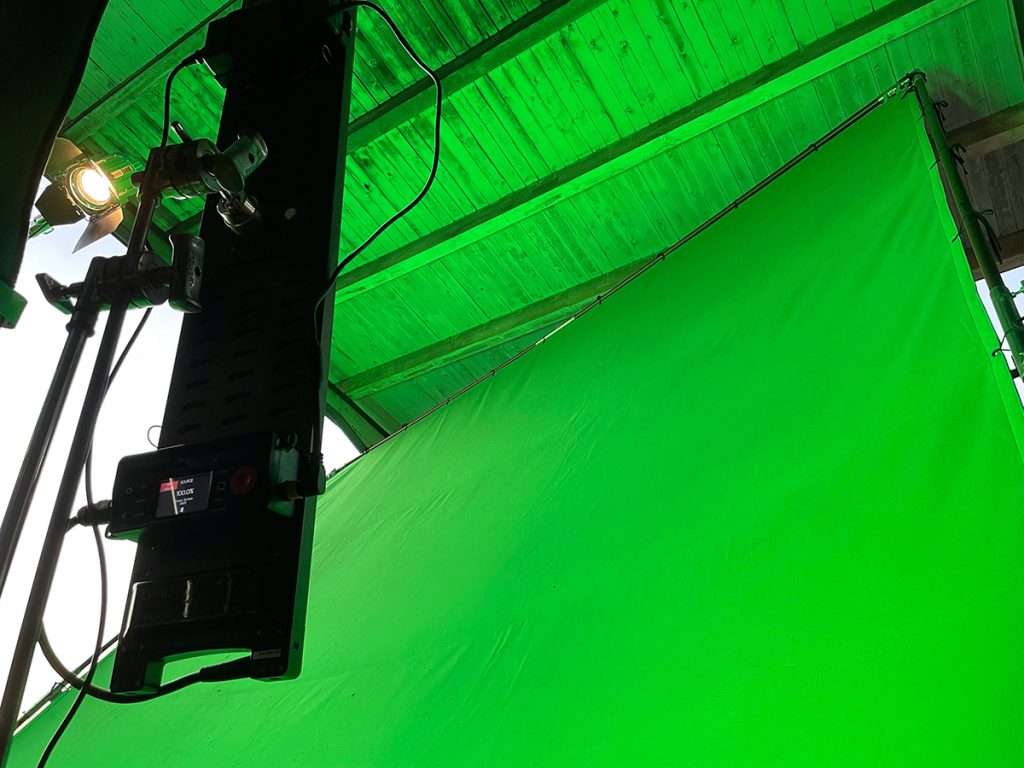 We had a few scenes to shoot inside a living museum location that housed farmyard animals inside some stables. The stables did not leave a lot of room for lights. We needed something small – but bright, and the lights couldn’t be too big because we were shooting on a 35 anamorphic lens. The natural choice was the Mini Mix. The Mini Mix was set it at 6500K and placed in the middle of a pile of hay to mimic the daylight coming in through the open door behind it. We supplemented with Maxi Mix lights outside to illuminate the stables through the windows. 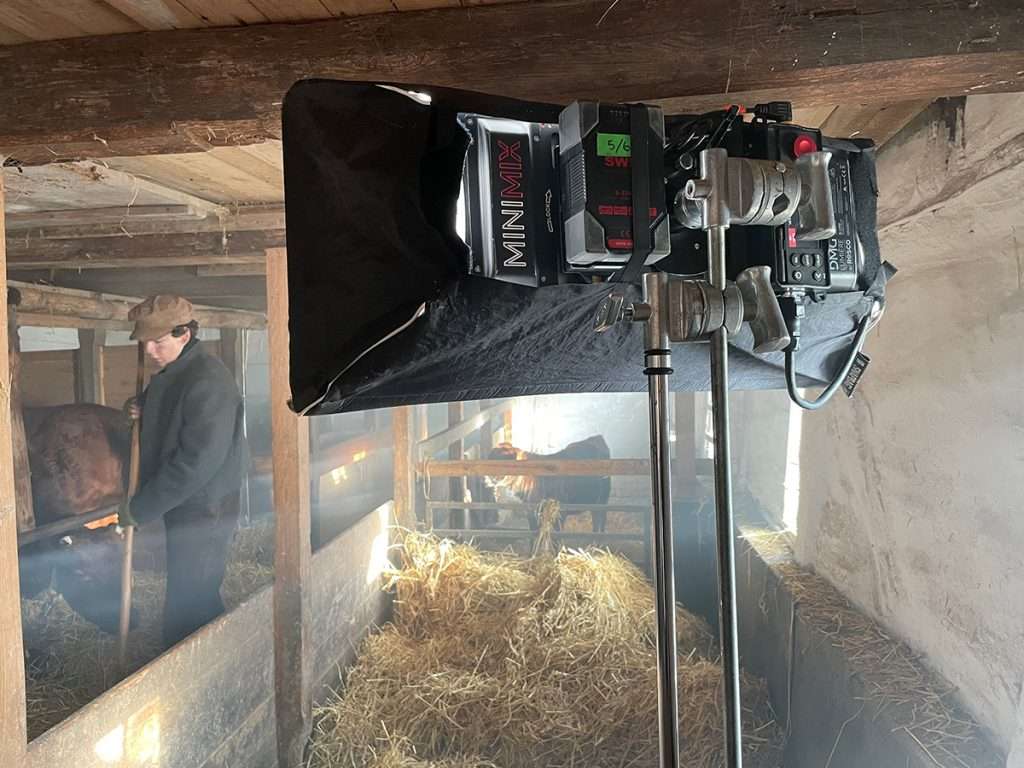 In the early 19th century, the houses were lit only with a few oil lamps and candles. When we planned out the shots for these scenes, we decided to use hidden fixtures to re-create the light from these period sources – especially in the servant areas. For the kitchen scene below we hid the DMG Dash set at 2400K with a Dot Round Diffuser behind the corner to illuminate the main character. This perfectly re-created the period glow of 19th-century illumination. The daylight seen in the background windows was created by Maxi Mixes set at 6500K. This produced a nice contrast with the warm feeling inside the room. 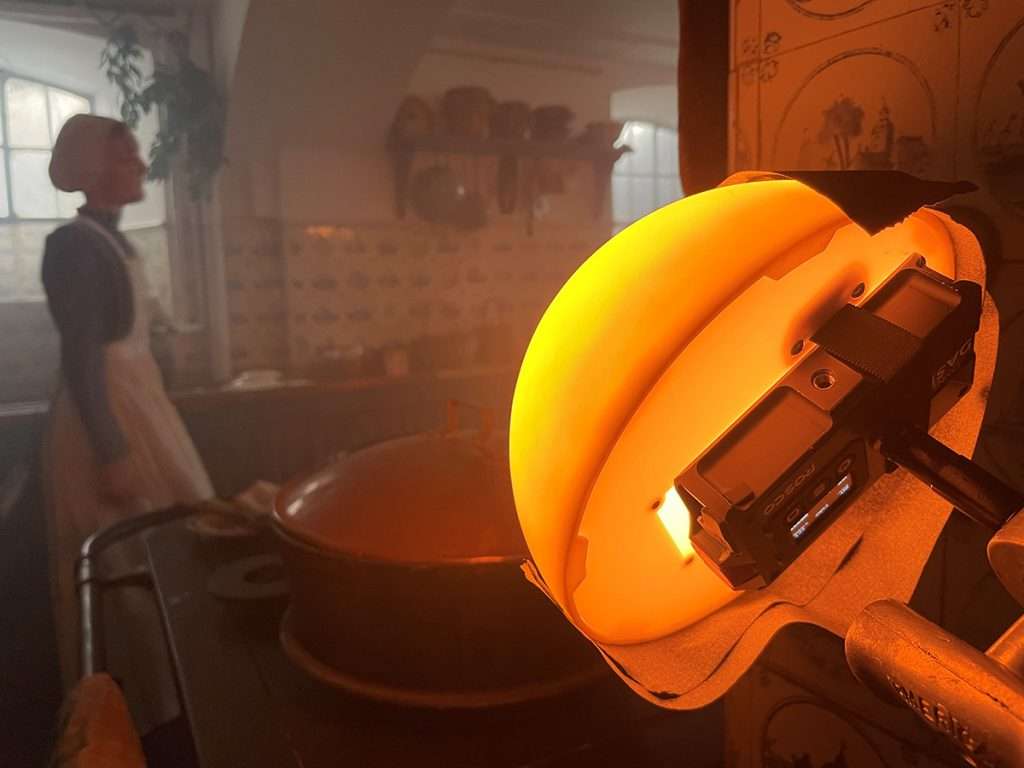 The DMG Dash saved us again when shooting in the servant’s utility room with a real fireplace. For safety reasons, using real fire is normally forbidden when filming in “museum houses,” but in this case, we were allowed to use it. To supplement the flickering glow from the fire, we mounted a DMG Dash near the fireplace. We attached its Dome Diffuser to soften and spread the light, and we set the fixture into Firelight in Effects Mode to create a subtle flickering fire effect throughout the room. 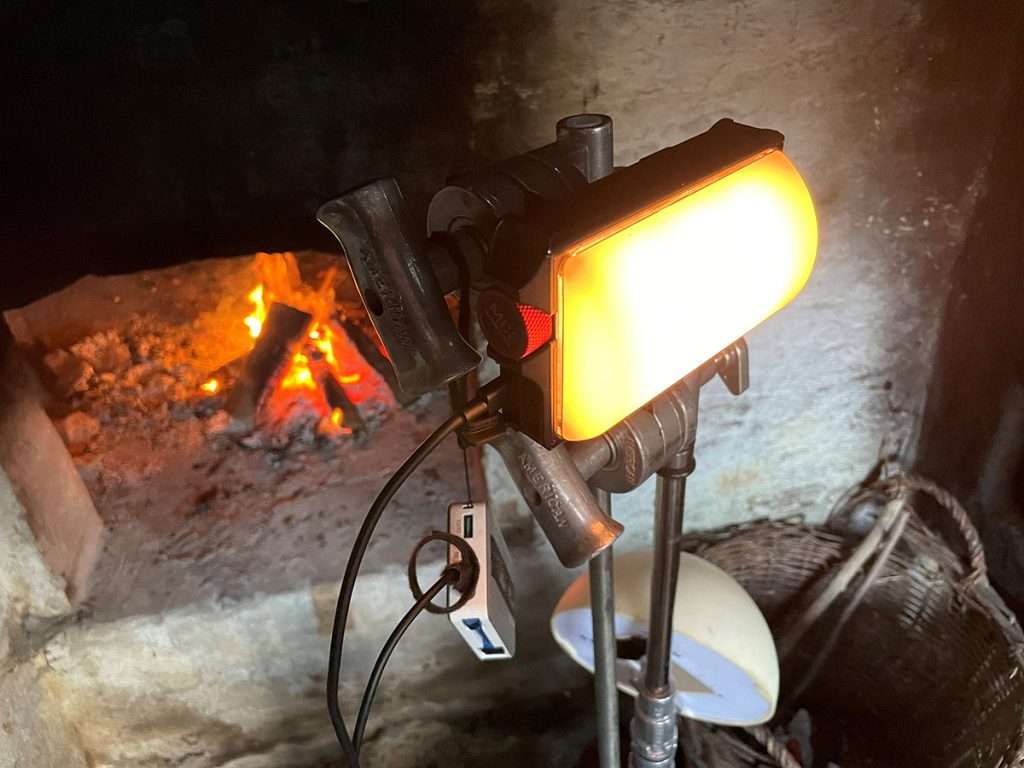 Having the entire family of Rosco DMG Mix lights available is wonderful. Whether I’m working on small commercials or feature films and TV shows, they enable me to quickly create fantastic lighting setups for any shot.