The Victorian tale of Black Beauty – transplanted into the contemporary American Midwest – gave British cinematographer David Procter the chance to get in touch with nature in more ways than the obvious.

Based on the 1877 novel of the same name by Anna Sewell, the US/UK/South African/German co-production stars Mackenzie Foy, Claire Forlani, Iain Glen and Fern Deacon. Featuring the voice talents of Kate Winslet, a wild black mustang, called Beauty, narrates her life from humble roots in the Onaqui Mountains of Utah, and her subsequent journey through the hands of different owners. Some are kind, such as John Manly and his niece, Jo Green. Others turn out to be far from well-meaning. 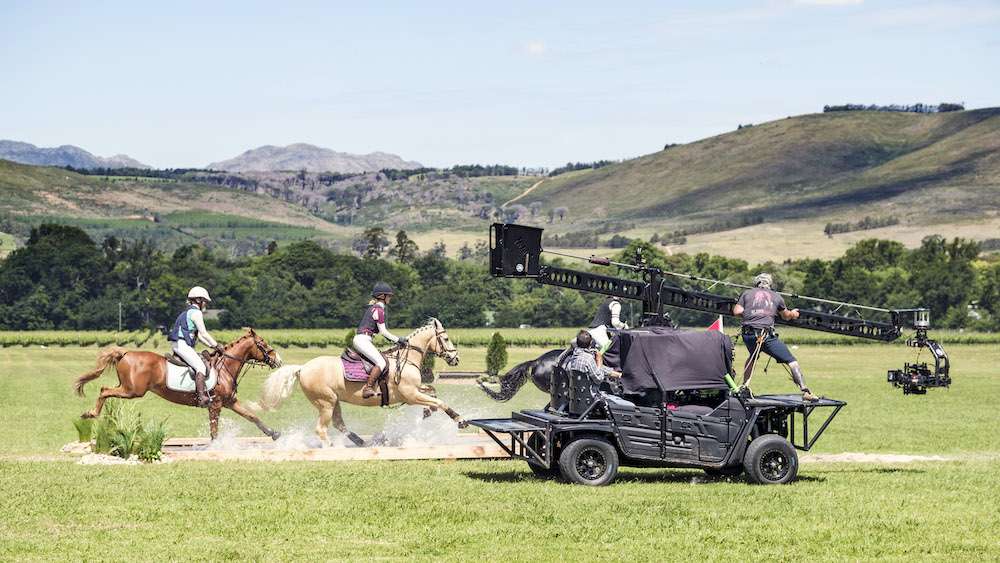 BLACK BEAUTY – A wild horse and a teenage girl forge an unbreakable bond which keeps them connected for a lifetime. (Disney/Graham Bartholomew)
DAVID PROCTER (CINEMATOGRAPHER)

According to Procter, Black Beauty director and screenwriter Ashley Avis’ vision for the Disney+ distributed movie was designed as a powerful cinematic journey, with nods to Hollywood classics, yet with an aesthetic more in line with independent film. Also, although this updated version of the beloved tale strays away from the original story, its spirit of empathy towards countering animal cruelty remains unblinkered.

Avis was familiar with Procter’s work on Netflix Original The Innøcents (2018), and his first feature Bypass (2014), and, after agents WPA paired the cinematographer with the director, a call with producer Jeremy Bolt settled the deal. From the outset, Procter says their sensibilities and tastes seemed perfectly aligned.

“I was struck by Ashley’s motivation, to raise awareness of the current mistreatment of wild horses captured in the American west,” he says. “I’ve always been drawn to issue-based dramas, films with underlying political or social commentary.” 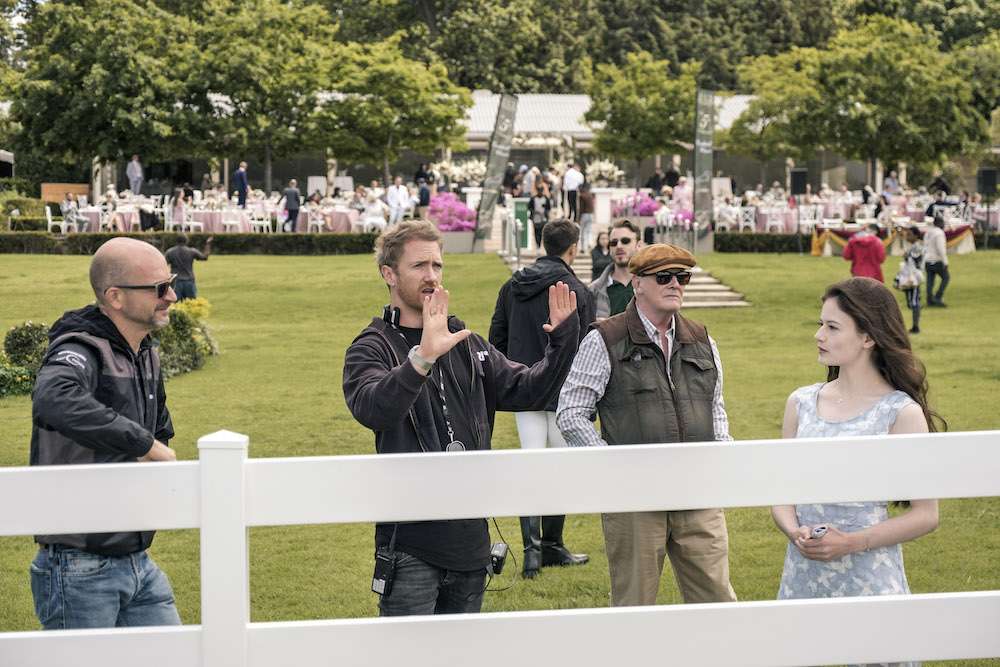 Describing her as a “deeply emotive storyteller”, Procter hails the passion and energy Avis brought to the film. “Her equine knowledge and profound connection to the script translated into an intuitive partnership with the cast.”

Principal photography ran for six and a half weeks of 12-hour days, from mid-October 2019, on location and at Cape Town Film Studios, followed by a couple of days on location in New York.

“Due to the tight schedule and often large sets, I worked with all my key team on headsets whilst darting around the set like a spider-monkey,” he adds. “For set-builds such as John’s (Iain Glen) cottage at Birtwick, the stable complex and the wild horse holding facility, I worked closely with Ashley and production designer Darryl Hammer exploring geographical scene blocking and studying sun-paths to optimise their positioning, which kept us well-prepared.” 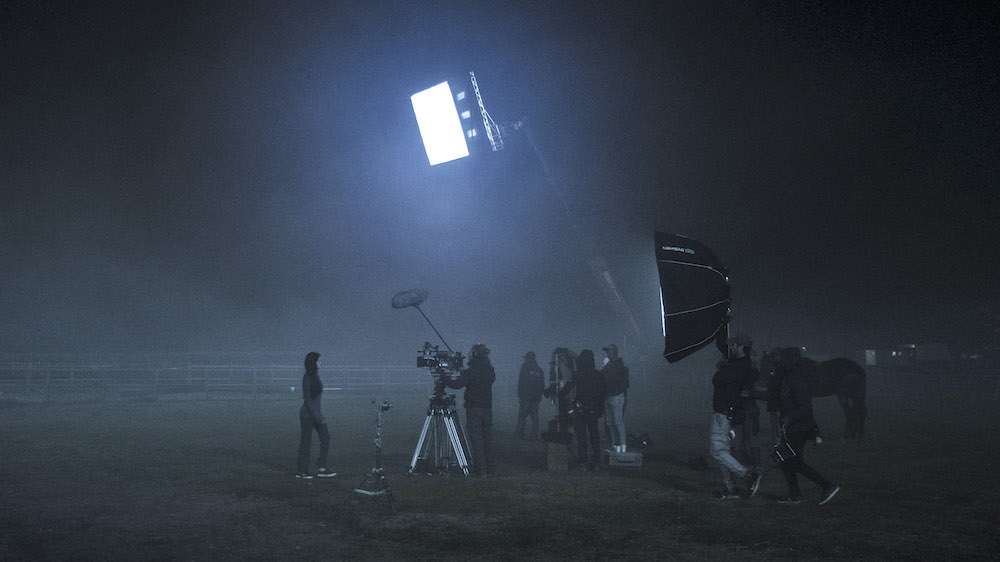 BLACK BEAUTY – A wild horse and a teenage girl forge an unbreakable bond which keeps them connected for a lifetime. (Disney/Graham Bartholomew)
MACKENZIE FOY

“My principle lenses were a set of Optica Elite S7 Anamorphics. I love the character, unusual fall-off and imperfections of these re-housed Russian lenses,” Procter says. “They have beautiful flare characteristics, without being overbearing, and when I presented my tests to Ashley, she was sold.

“With many key scenes set at dawn or dusk, we also carried a set of Zeiss Highspeed T1.3 spherical primes. The significantly wider aperture than our primary Anamorphic set gave us over 20 minutes additional shooting time each day, whilst also allowing coverage in the ethereal gloaming light. We also carried an Angenieux 12:1 zoom for our more unpredictable horse coverage, and on multi-cam days we utilised additional Kowa and Hawk Anamorphics.” 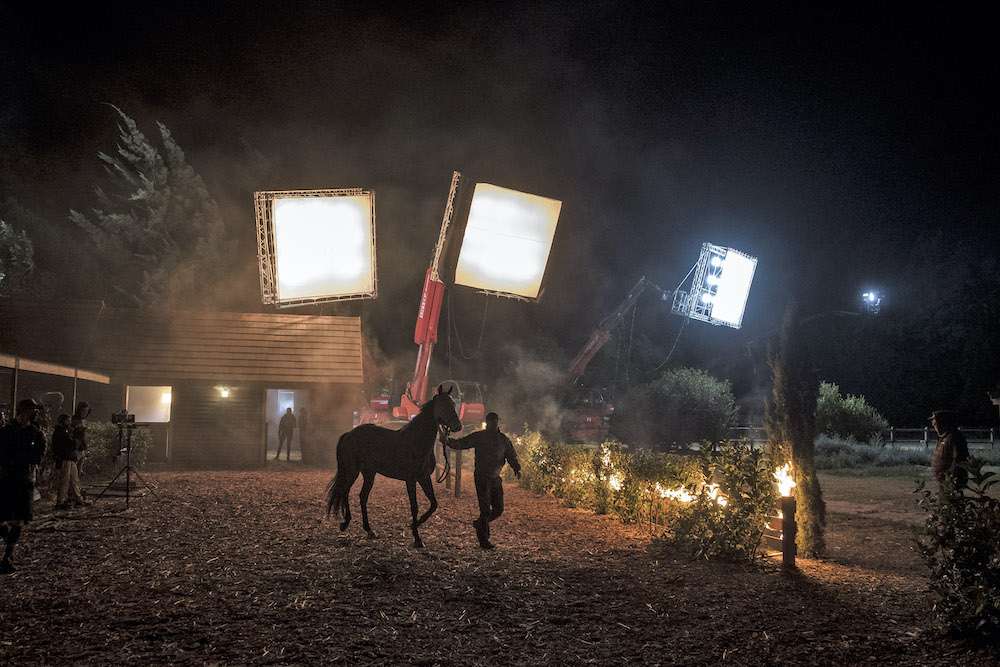 BLACK BEAUTY – A wild horse and a teenage girl forge an unbreakable bond which keeps them connected for a lifetime. (Disney/Graham Bartholomew)

Procter says lenses with natural character help do more than simply document their subjects. “I studied the body language and expressions of our lead horse, Jenny, during prep and tried to design reciprocal frames for her, based on traditional human coverage – we found the eyes and ears to be critical emotive beacons.”

Describing the film as “a lyrical journey”, Procter says the intention was to “approach the photography in a balletic way, embracing gentle camera moves and subtle parallax. We sought bold juxtaposition between the vast expanse of nature and more claustrophobic frames in stables and confinement.

“We wanted to embrace the rugged, earthy tones of nature, rather than push too much artificial colour into the sets and imagery, avoiding the archetype high-contrast, heavily-saturated images one might associate with this genre of film,” he adds. “We strove for a gentler, more painterly aesthetic.”

Procter intentionally pushed his lenses to their optical limits, finding that the “aberrations, distorted bokeh and flare helped create painterly and evocative portraiture”. 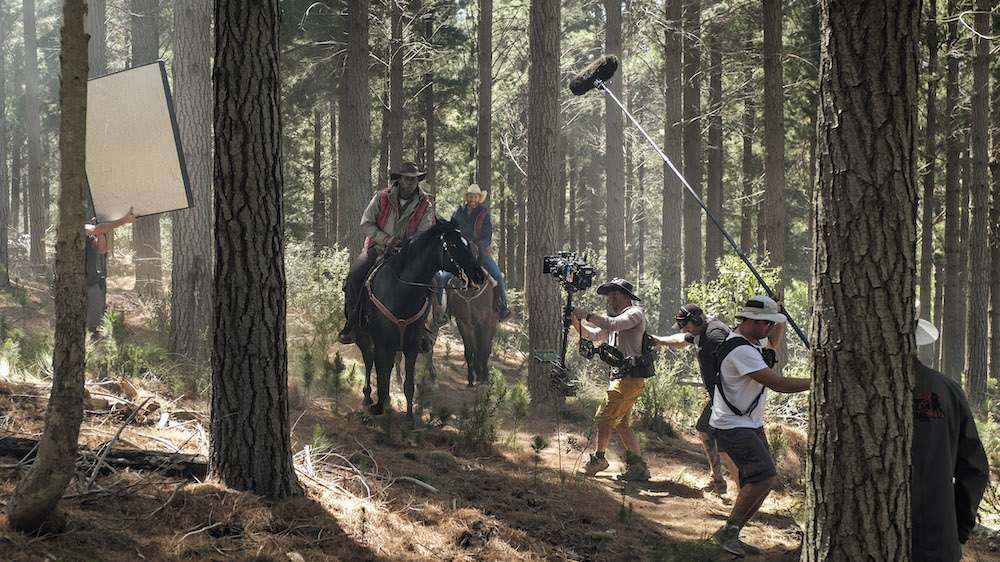 BLACK BEAUTY – A wild horse and a teenage girl forge an unbreakable bond which keeps them connected for a lifetime. (Disney/Graham Bartholomew)
DAVID PROCTER (CINEMATOGRAPHER)

The primary objective was to humanise Beauty, narrated by Winslet, with Avis dictating that no scene could play out that the horse couldn’t directly witness. “This gave us strict visual parameters, to always have a subjective viewpoint from Beauty’s paddock or stable,” Procter explains.

“The intimacy between Beauty and Jo (teenage lead Mackenzie Foy) develops slowly through the film and we carefully evolved from detachment to the mutual connectivity of over-shoulders and shared frames,” he adds.

For Beauty’s lighting, Procter drew on his extensive experience in shooting car commercials and products. “Beauty’s coat tone relied heavily on reflective light as well as direct sources,” he says. “For some paddock scenes we lit her direct with an ARRIMAX 18K, unconventional but effective, and built large 20x20ft ultra-bounces for reflective light. As so much emotion is carried in Beauty’s eyes, we used large circular sources to ensure a glinting eye-light at all times. These techniques were a delicate balancing act in scenes with fair-skinned Jo.” 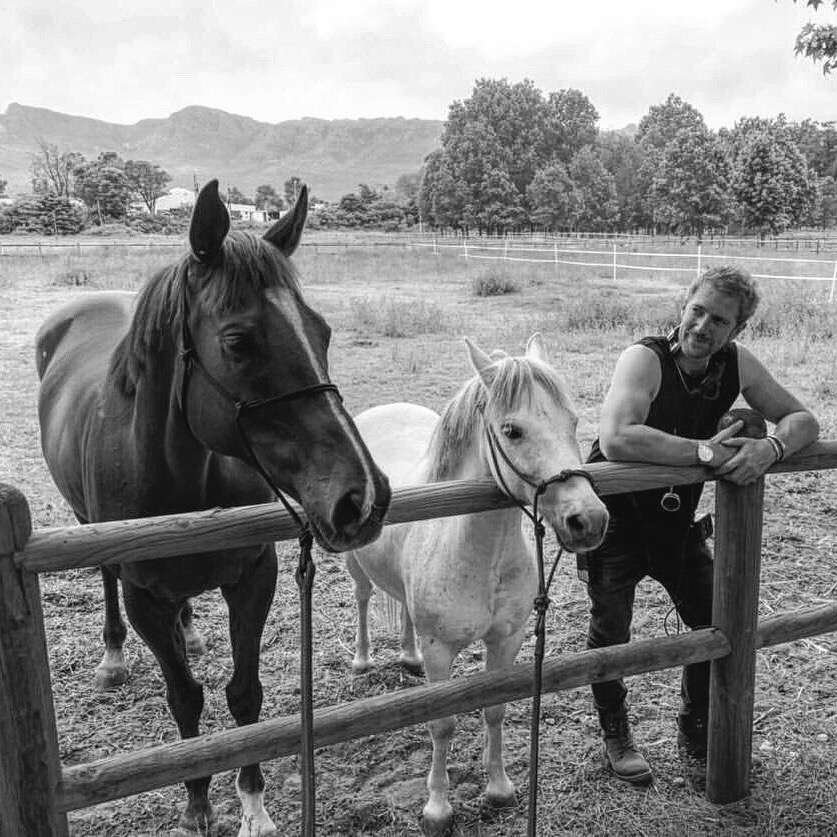 “Where possible, we flagged the sun when the angle was problematic and back-lit with pairs of ARRIMAX 18Ks on another machine,” he adds. “Capturing scenes with any semblance of lighting continuity was a daily battle, led by my gaffer Justin Paterson and his team. For interiors, Justin and I worked closely with production designer Darryl Hammer on practical lamp design and positioning, embellished with multiple SkyPanel S60s and Astera Titans.”

It was important narratively to make Beauty’s various stables feel comfortable. “By creating the feeling of sunlight beaming in through windows and skylights, we were able to romanticise these temporary homes, representing their emotional comfort,” Procter says. 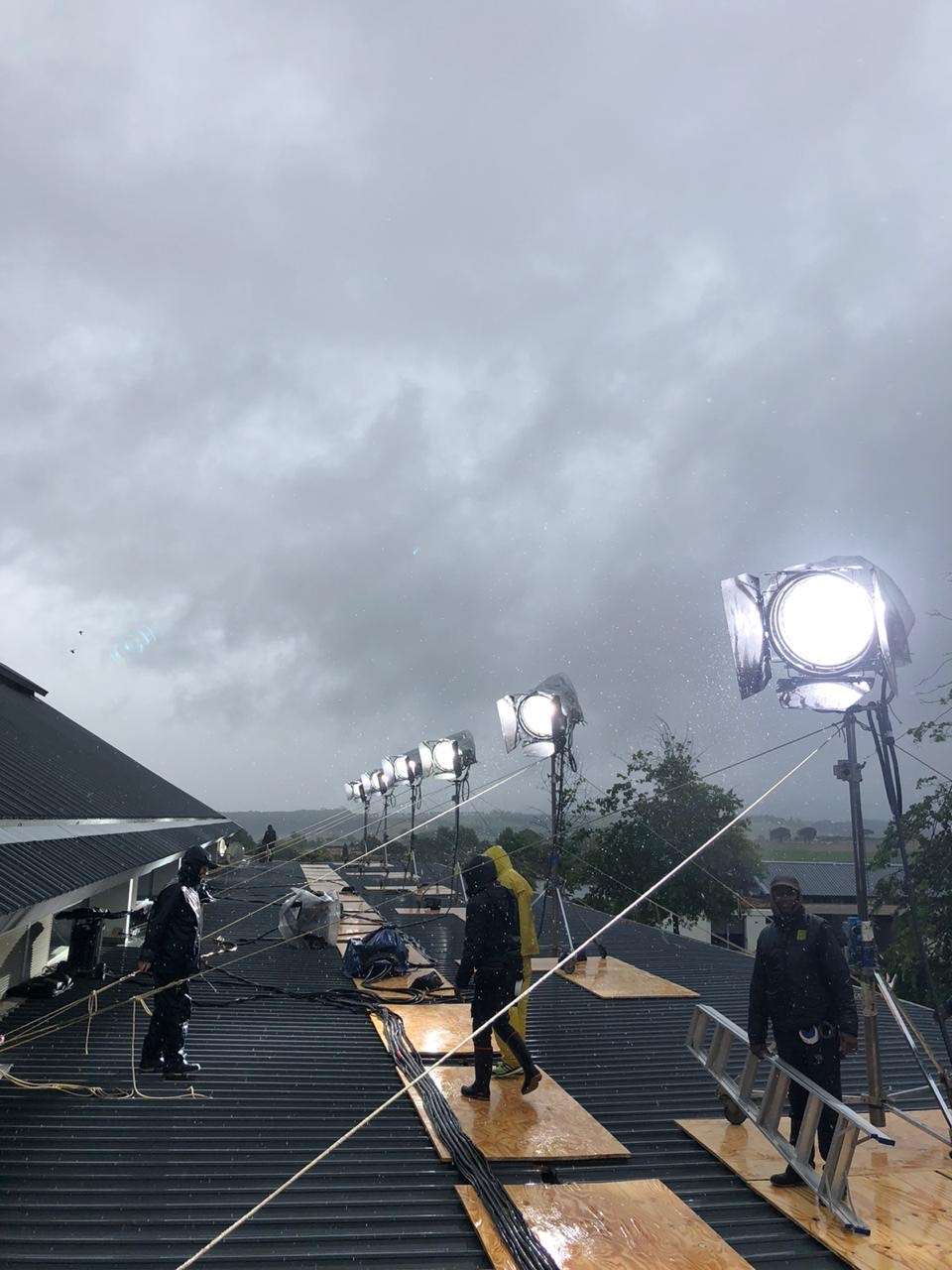 “Convincing moonlight requires lighting deep into the background and so we were attentive to rake light to the perceived horizon,” Procter reveals. “The DMX effects control of the SkyPanel softboxes was great for embellishing the light emanating from the fire.”

For Beauty’s final moments away from Jo, Procter wanted to explore “an almost dungeon-like aesthetic, with amber bulkheads feeling almost flame-like, mixed with murky green-spiked fluorescents. This dirty colour mix aims to embellish the squalor in which she’s living. This culminates with the heat lamp casting Beauty in sinister red light for her weakest moment of despair.”

The film threw up some challenges. Principally, the precise composition when working with horses. “The horse team, Film Equus, were incredible and liberty trainer Cody Rawson Harris could truly achieve the impossible,” says Procter. “But an amount of flexibility was required for improvisation. No camera was ever completely locked off, instead working on track, sliders or Steadicam, even when still frames were required, to allow for constant reactive re-framing.” 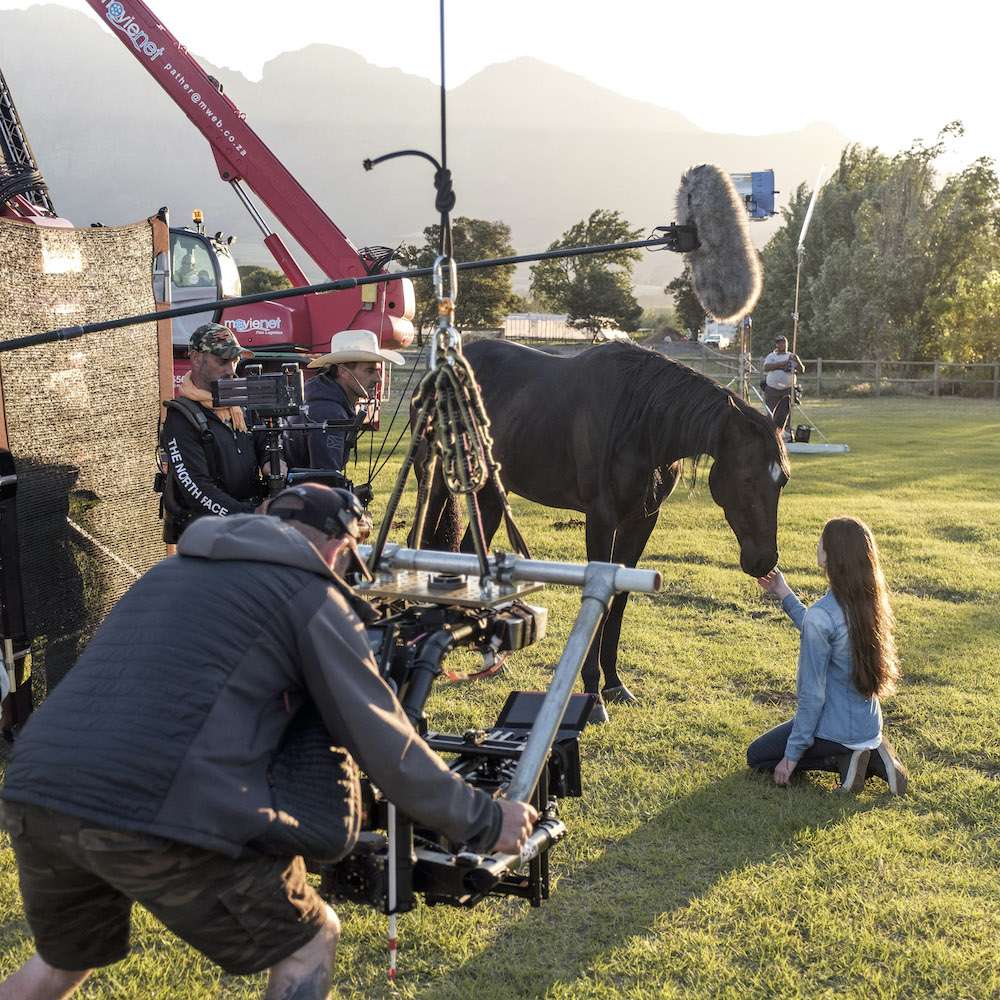 “Coupling film and industrial technologies the system allows a Movi-XL to be suspended from a 130ft cherry picker on a weight-adjustable spring-balancer, which renders the camera completely weightless. Working like a pendulum, with a 3m vertical range of movement, it allows the camera to cover a 30ft radius of movement. We used this extensively in the riding ring scenes, but also for intimate moments such as where Jo first names Beauty.”

A dramatic fall during the film’s race sequence was rehearsed extensively and achieved in-camera under the guidance of Film Equus and stunt coordinator Mo Marais, but the key challenge was proximity to Beauty whilst on the move.

“Drones, and the Teryx tracking vehicle were excellent tools for wide and medium coverage. However, to embellish narrative subjectivity we needed to be much closer, and so the H2H (Horse-to-Horse) rig was born,” says Procter.

“By utilising a fusion of traditional cinematography tools with drone technology, Rob Weidner, our operator/gimbal-tech, designed a rig that could be held by a stunt rider right in the fray with the horses, yet the head and focus could be controlled remotely using a Futaba transmitter and Teradek RT FIZ. With a wireless Teradek 3000, and multiple hidden receivers we could use the H2H rig across vast distances. This enabled shots that would have been otherwise impossible to achieve safely. A mechanical horse rig was also utilised for close coverage of our cast riding at speed. The rig was modified to replicate the various gaits of a horse and mounted on a low loader.” 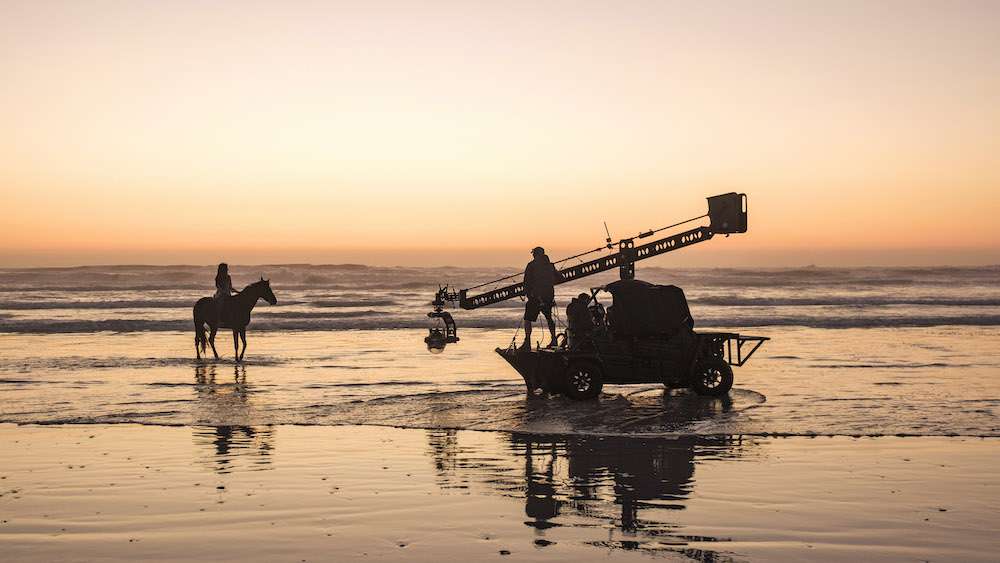 Avis was passionate about the NYC winter scenes being on Central Park’s iconic Mall & Literary Walk, but logistics precluded this. “Working closely with VFX supervisor Marc Bloch from Black Ginger, we devised a plan to shoot the scenes at Cape Town Film Studios against bluescreen, and later shoot the location plates in NYC,” reveals Procter, who scouted Central Park on Google Maps.

“All scenes were then storyboarded with focal lengths in mind, and we sent local DP Josh Kraszewski to scout with an Artemis viewfinder and a stills camera to our pinpointed locations. These stills then gave me a rough guide to environment for our studio shoot of our cast, horses and carriages.”

Only the snow-covered floor was real in the studio, which was lit with 140 SkyPanel S60s and multiple M90s for directional light. 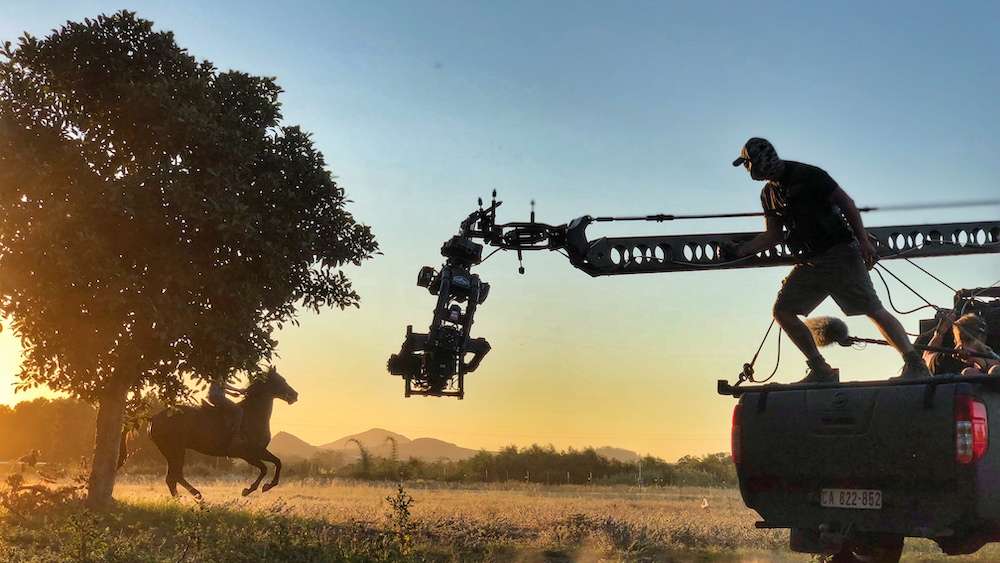 “With precise lens data and Q-Take for refinement, we were able to then shoot the Central Park background plates in February 2020, completely re-locating some scenes,” says Procter. “This process was the reverse to the traditional method, and so challenging, but I’m very proud of the team for pulling it off.”

This was Procter’s first studio film and he admits to having had initial reservations about potential politics of such large-scale production. “However, producers Jeremy Bolt and Dylan Tarason had assembled the most devoted and dedicated team I’d ever encountered – their passion and energy was infectious. My entire camera and lighting team were world class, among the best I’ve ever had the pleasure to work with. The speed and passion of every single individual enabled us to shoot a Hollywood biopic in a fraction of the time.”