How ARRI Solutions engineered the virtual stage for Netflix’s “1899”

Netflix’s “1899” demonstrates the huge creative potential that LED volumes can unleash for filmmakers. DP Nik Summerer shares his experiences of collaborating with ARRI Solutions on an effective virtual production design.

Set on a migrant steamship, Netflix’s mystery series “1899” tells the stories of a multicultural cast in search of new lives in the US, whose journey quickly becomes a nightmare. The show’s innovative use of virtual production aimed to immerse viewers entirely in the drama. Collaboration between creative, technical, and production partners would be key to its success.

ARRI was already a long-term partner, having supported showrunners Jantje Friese and Baran bo Odar on “Dark” through rental and postproduction services. ARRI Solutions, ARRI’s dedicated team for designing and engineering high-end production studios, took responsibility for the planning, commissioning, and technical integration of the “1899” project. Cinematographer Nik Summerer takes us behind the scenes of this fascinating shoot. 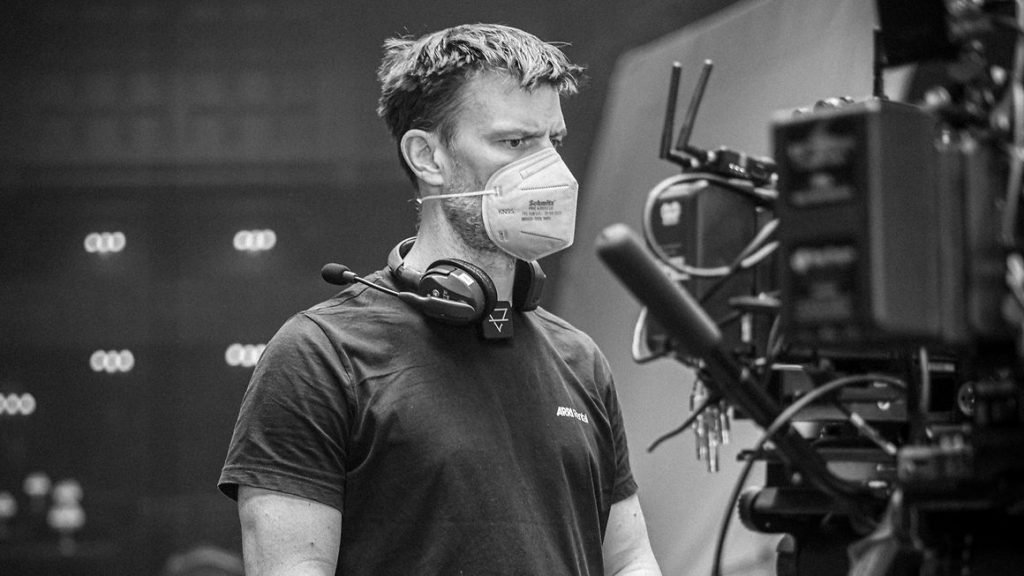 What were the main properties of the stage and how did they influence the shooting process?

To have a close-to-perfectly lit and naturalistic looking environment, you want to surround yourself with as much screen real estate as possible. That’s why volume studios are built in a half-circle or elliptical shape. A perfect studio would most likely be a full circle, but you can’t really do that because you need a large opening to bring in the physical sets and film equipment. So, the remaining opening—think of it as a light gap—you close with either additional movable screens or supplementary lighting. I chose to work with the latter for flexibility reasons.

All of our ship set builds were elevated, so that most of our framing angles would never see the „real“ stage floor, which removed the need for replacement in post. Our most innovative element was a revolving turntable built into the stage floor. It was very important for our director that the volume did not restrict his way of filming a scene. This meant after the wide shots, you move into closer shots and then turn around for the reverse angle. However, if you have a fixed foreground set that only allows filming in one direction, the reverse can only be achieved if you basically flip the whole set 180 degrees. That’s a very time-consuming process, and you risk losing the chemistry in the scene. With the turntable, which turns a full circle in about three minutes, we could quickly set up for the reverse shot, with the main lights and crane base already in position. 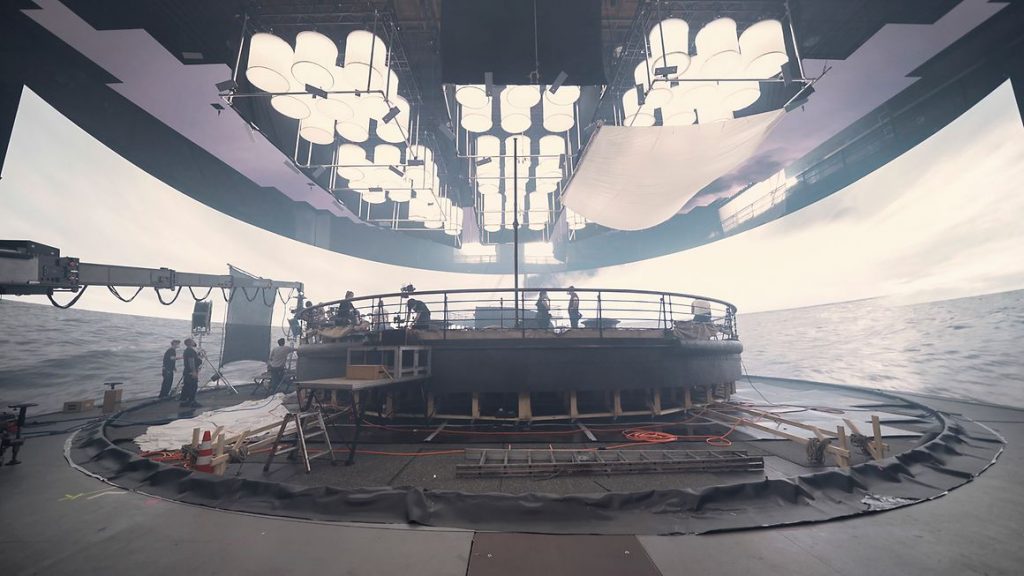 An innovative revolving turntable in the stage floor was an integral part of the virtual production design.
Copyright Netflix

Lighting also plays a huge part in creating authenticity in virtual production—can you tell us more about the approach for “1899”?

Overall, lighting is a critical element in a volume, because how well you can match the foreground to the background determines how successful the final picture will be. Certain elements within the backdrop asset can be shifted around, but it’s the careful marriage of the foreground to the background scene that creates the illusion of one cohesive world that you’re immersing your characters into. There are many different workarounds, and I’m hearing DPs trying different approaches, but what worked well for me is having a combination of professional luminaires that augment and complement the lighting source established on the volume screens.

In our testing phase, we found that replicating skin tones within the volume would be very challenging. There is a vast range of different skin tones in our cast that we had to consider, from pale, porcelain skin and red hair to brown and black skin tones, to characters with a lot of facial hair, like our captain for example. The light and colour quality coming from the LED wall provided brightness, but not the distinct natural colours we needed. Mixing with another wider spectrum light source like the ARRI SkyPanel gave me higher-quality skin colour rendering and a much better base to work from in the grade. 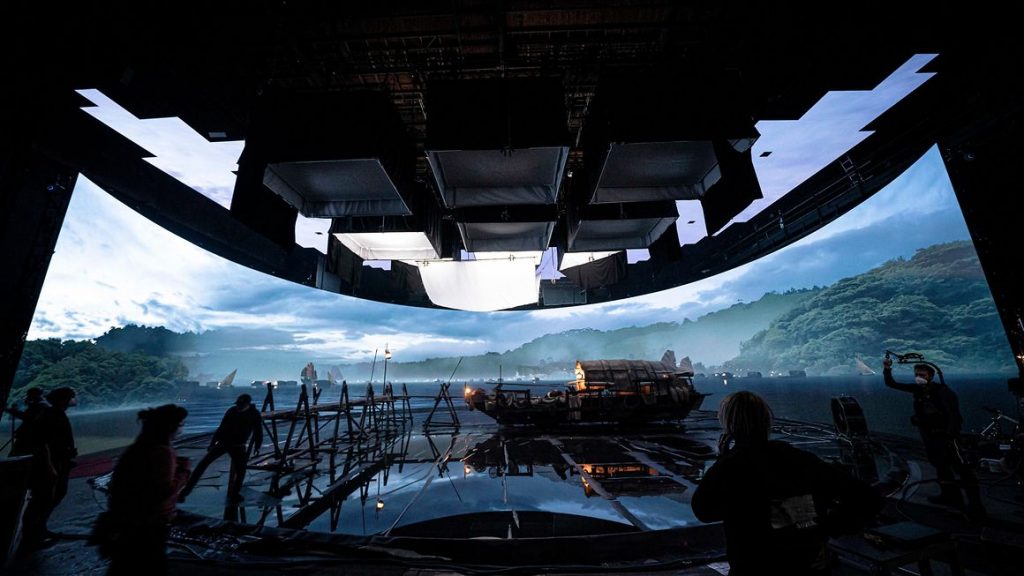 The series is incredibly atmospheric—how important was the lighting to the overall effect?

The lighting was critical. There’s a lot of water in the series, naturally, but weather also played a huge part, with cloud rushes, fog, storms, rain, and lightning creating an atmospheric backdrop. Our volume stage was rigged with a large toplight, containing nine individual softboxes filled with a large amount of ARRI SkyPanels. This setup gave me the control I needed to enhance the drama of the atmospheric details in the environment we wanted to create.

What were your camera choices, and were these influenced by the volume shoot?

When filming in a volume, you want to avoid having the LED screens in focus, which led us to a large format camera—the ALEXA Mini LF. The camera gave me the immersive large-format look that I really like and could be fed with a genlock signal to communicate directly with the LED wall. The director and I wanted to work with anamorphic lenses to wrap the story in a certain characteristic look and feel. Additionally, the anamorphic lenses helped us soften the screens in the background even further. To get that specific lens look, I collaborated with Christoph Hoffsten at ARRI Rental. We experimented and ultimately customised a series of ALFA lenses with bespoke elements to give me the balance of bokeh, highlight flare, and enhanced focus fall-off that I was after for our storytelling. 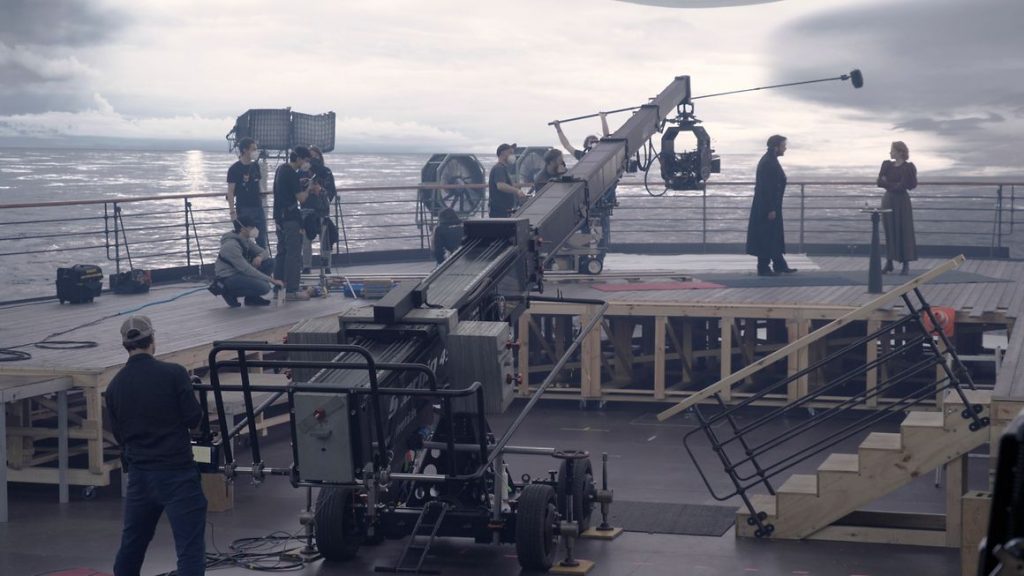 Did your approach to scene composition change when working within the LED volume?

Most of our background content was created digitally in Unreal Engine. Before shooting we did a lot of ‘virtual’ scouting, for example working with 3D models and walking around the environments with a virtual camera, figuring out where the action should take place, and which set builds both real and virtual would be required to best tell the story. Our scouting also helped us determine a sweet spot of staging area, about four to five meters away from the screens, so that seeing individual LEDs could be avoided. I really believe that framing is one of the most important elements of cinematography. So being able to place a character precisely in relation to background elements while filming was a major advantage over a greenscreen shoot. With greenscreen shoots, such framing decisions are often made many months later and may not involve the DP anymore.

What have been your biggest learnings from the volume shoot?

You can’t just go into a volume and start shooting—many people still have this preconception. Well, I guess you can, but the result will most likely be disappointing. I believe you really must familiarize yourself with this new realm in advance, and experiment with a background screen which is now not only your background but also your lighting instrument, with great advantages, but a life of its own. Then there’s the brain bar team, a whole new set of people you now communicate with to control the background screens to tweak brightness, color temperature, contrast, or shift background elements. Once you’ve played around and understand limits and challenges, possibilities, and advantages, you’re in a much better place to make good creative choices for favorable results. Overall, I think the biggest takeaway is just to be brave and enjoy the process. Although every project is very different, one general rule is the more careful and diligent  your work in preproduction, the more straightforward it becomes during production to marry the foreground and background and get that authentic look. It’s really worth taking the time to check each detail, as this will have a massive impact when you get out onto the set. 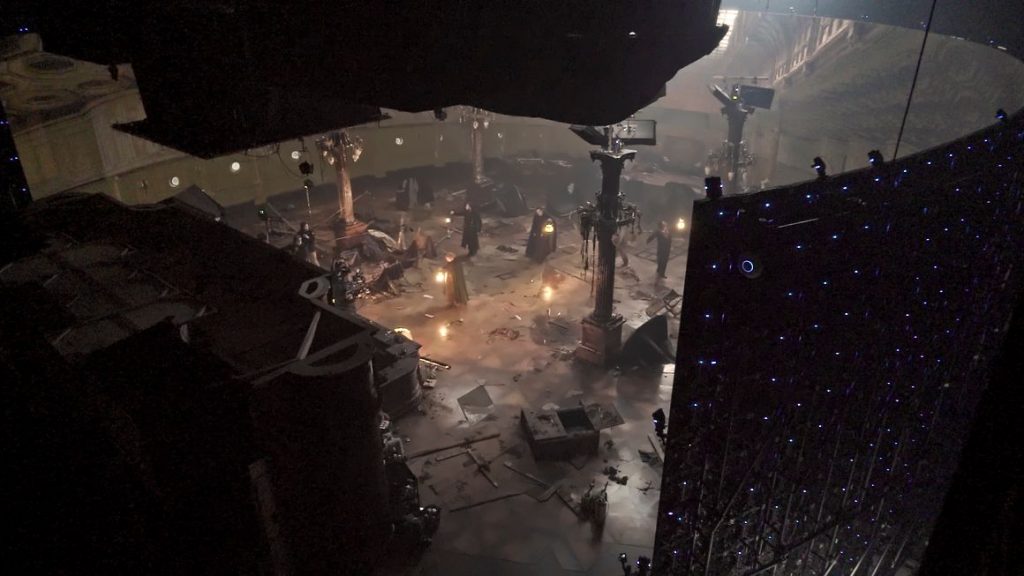 “The biggest takeaway is just to be brave and enjoy the process,” says DP Nik Summerer about shooting in an LED Volume.
Copyright Netflix