In Violet, writer and director Justine Bateman delves deep into what empowers the voice in our heads to push us into making fear-based decisions. Olivia Munn stars as Violet while Justin Theroux embodies The Voice. Immersively captured by cinematographer Mark Williams, Violet is a film that creates a palatable experience for the audience as they follow the successful but tragically unhappy main character through conflict after conflict to the roots of her fears. Violet will have its international premiere at the Toronto International Film Festival in September and go on to theatrical release later this year. 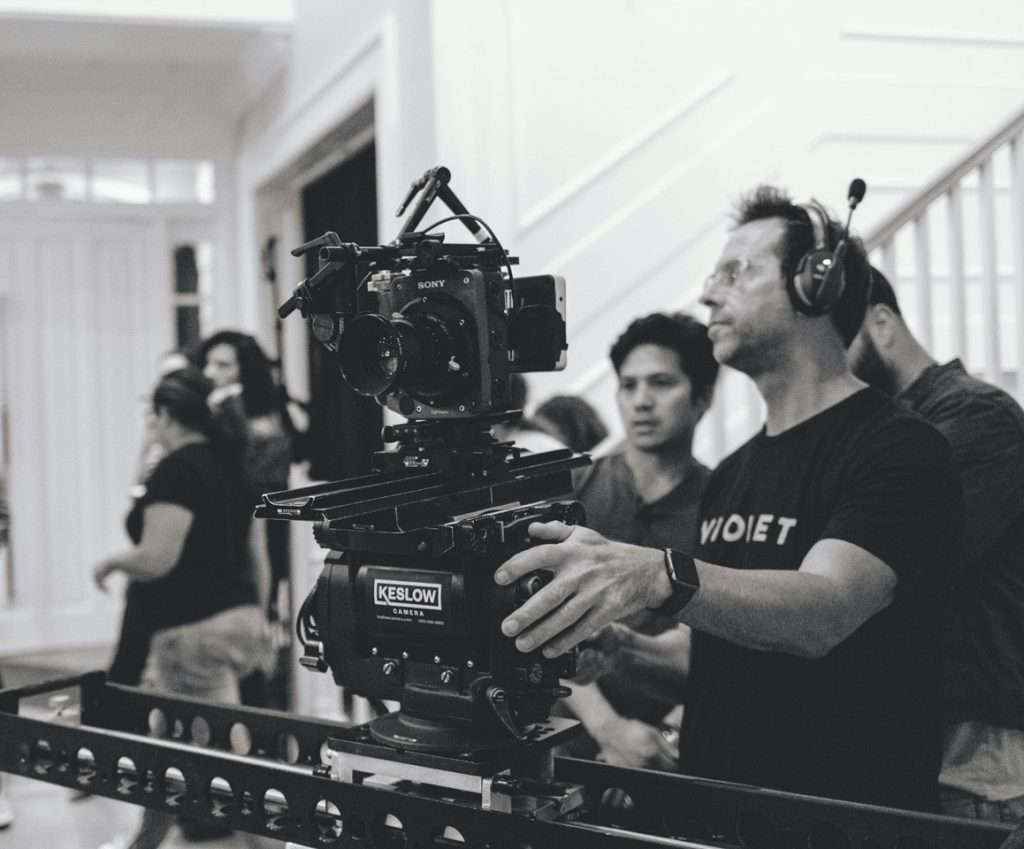 Justine Bateman: Violet is a story about a woman and The Voice in her head, the one we all have that pressures us to make fear-based decisions. Violet realises that The Voice has been lying to her for her entire life and the negative things she’s afraid of, that she has sacrificed so much happiness and honesty to herself to avoid, aren’t actually going to happen. After this realisation she begins to question everything, but The Voice is relentless. The roots of those fears go very deep and are often unknown until we start digging them out and looking at them.

Mark Williams: The Voice is a primary character and the most important moments in the film center around its confrontations with Violet. The Voice is intense, agitated, and sometimes it actively pursues her. Justine and I had a lot of conversations about how to convey this cinematically and getting the camera close to Violet’s face, bringing the viewer in close, was always part of that visual language. 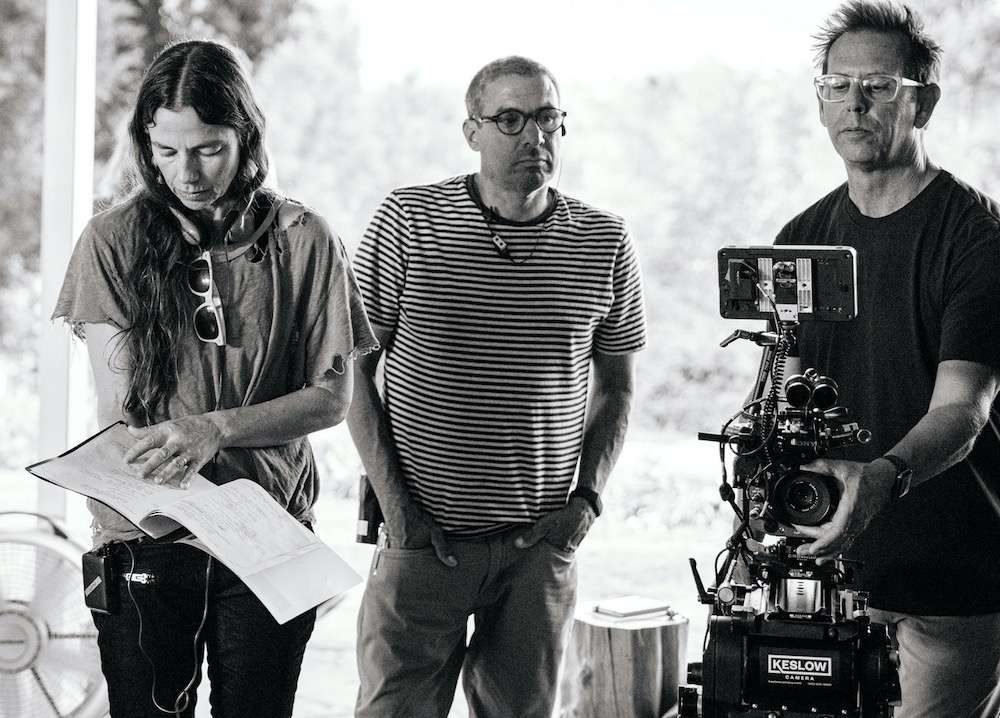 Justine Bateman: The film is crafted as an immersive and intimate experience for the viewer, like a coat they can put on, and thereby go through the experience themselves. We designed the visual and auditory components of the film to accentuate that feeling.

Mark Williams: We needed a small camera and lens package to create intimacy and after a lot of testing we chose to pair the Leitz M 0.8 lenses with the Sony Venice Rialto extension system. For more than half the film we shot with it mounted on the DJI Ronin 2 gimbal either as a remote head or handheld.

We only had 17-days to shoot and we needed to be able to move between setups quickly. I didn’t consider using zoom lenses because balancing a zoom on a gimbal can be time consuming. And, I knew could cut myself some slack in micro-balancing the rig because the lenses and camera were so light. We rented the camera and lenses from Keslow Camera Los Angeles. They had redesigned the Rialto camera head housing with extra ¼-20 and rosette mounting points on the sides, top and back, which allowed me to keep the gimbal dovetail on the camera permanently so swaps from studio configuration to gimbal were less than five minutes. 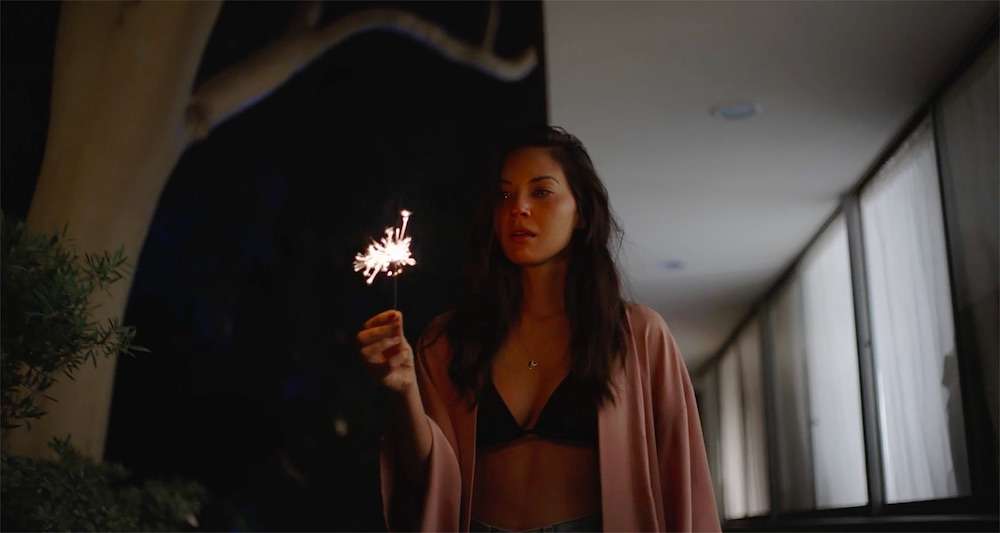 Justine Bateman: We were shooting 7-8 pages a day, often getting into small spaces and trying to set up quickly. Sony’s Venice Rialto system and the Leitz M 0.8 lenses enabled us to do that. But the camera system helped us in other ways than just speed. There’s one scene in the kitchen of Violet’s office where there is a reflective surface behind the characters. We were able to shoot it with just the camera head in frame and in the reflection it just looks like a napkin dispenser on the counter. You can’t make out that it’s a camera.

Mark Williams: There’s another scene in Violet’s car where The Voice is accosting her and the camera is right in her face. We didn’t have the resources to pull out windshields but we were able to quickly mount the Venice Rialto with the Leitz M 0.8 21mm lens using just suction cups and Magic Arms to the inside of the glass. We screwed in an 80mm +1 diopter to get the close focus just right. The whole rig weighed maybe four pounds. I kept expecting weird distortion or some adverse effects with this setup, but we were getting inches away from her face and the image looked great. Occasionally with this setup we wanted to change the angle of view and punch in a bit. In those situations we would just push a button to switch from 6K full frame to 4K S35 capture. No lens change or re-rigging necessary and much less interruption for the actor. 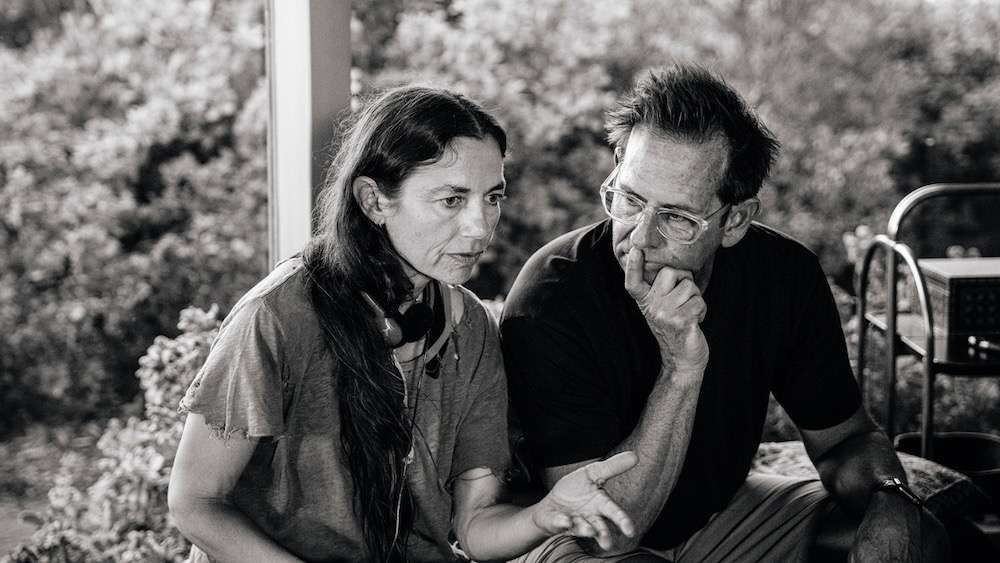 Justine Bateman: To create the immersive experience I wanted to have a really tangible visual intimacy. I wanted it to feel raw, but in an inviting way. Not raw like open heart surgery, but raw in its intimacy and authenticity, like using very little makeup on actors and giving them room to access their emotions. The compactness of the camera and lens setup helped give them this space.

Mark Williams: When you put a big camera loaded with accessories and crew in front of someone’s face it’s just one more thing for them to get past when delivering their performance. Even the best actors are sensitive to commotion around them and there are moments in this film where Olivia gets deep inside herself. It was an emotional challenge. It’s so helpful to remove the presence of the camera, keep the set low-key, and leave the space to the actors so they can go there without distraction.

The Sony Venice Rialto and Leitz M 0.8 package was so small and unobtrusive in a way that reminds me of my Leica M cameras. Unlike a DSLR, they don’t scare people when you put them in their face. It perfectly fit into the style of filmmaking we wanted to do. 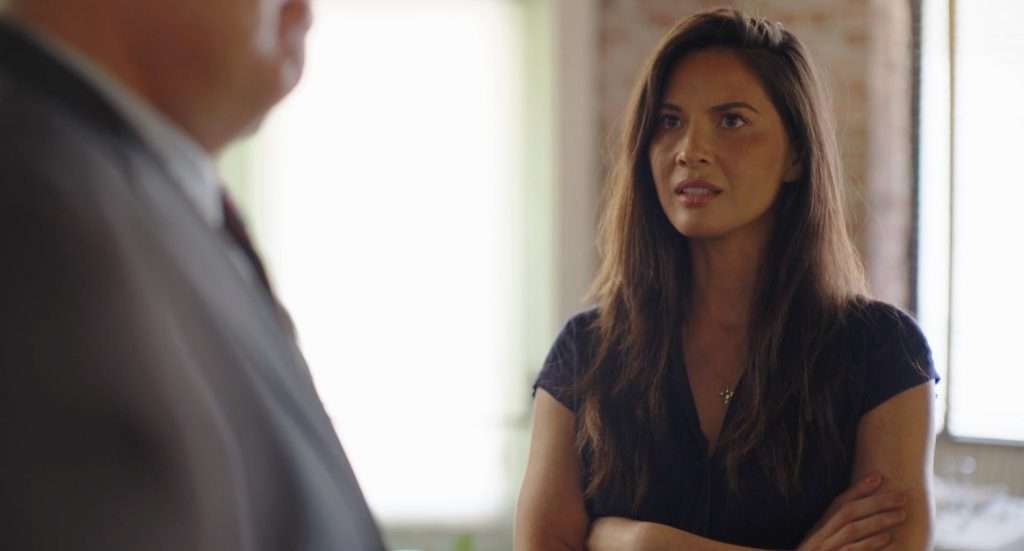 Justine Bateman: Most of my direction to Mark was from films I’ve watched or paintings I’ve seen. I’d rather use stills than storyboards because I prefer to point to a still and say, “I want to get that feeling.” Mark was really good at technically delivering what we talked about. It’s one thing to be aligned in the vision but another thing to be able to translate that.

Mark Williams: One of the great things about the Sony Venice is that the colour space doesn’t really have a flavor. It’s so perfectly neutral and allows the lenses to do their job. If I switched lens brands in the middle of a scene you would immediately tell the difference. So when it came time to choose lenses I knew I wouldn’t be able to match the quality of Justine’s reference images without great prime lenses.

I used to assist (cinematographer) Salvatore Totino ASC AIC and he’s the guy who turned me onto Leica M photography cameras and Leica glass. There are endless cliches about the Leica look, but there’s a reason why they exist. When I finally saved up and bought a Leica M6 and some Leica lenses I could tell from the first roll there was a huge difference in the images I was getting. And now, after thousands of rolls of film, I know exactly what that glass does to skin tones. 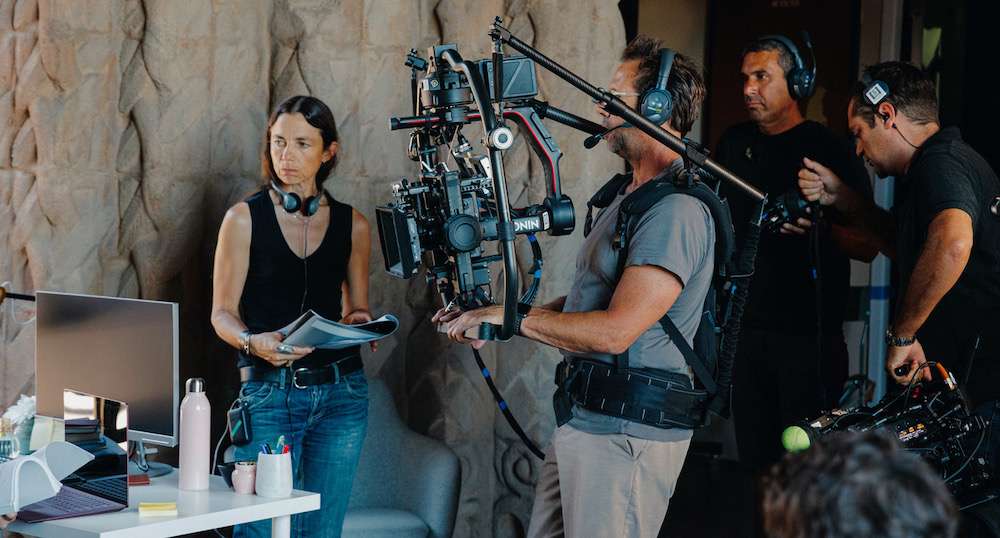 The rendering of the Leica M glass, which is used in the Leitz M 0.8 lenses, is so perfect. There’s no question about the resolving power. And there is an innate warmth to the lenses in a way that doesn’t feel false or forced. It’s natural and super complimentary to skin tones. It’s easy for anyone to make someone look beautiful with warm interior light at night, but this glass shows beautiful skin tones under harsh, daylight exterior conditions as well.

On so many jobs I’ve felt like I was compromising with the camera package, unless of course there are unlimited resources. But with the Sony Venice Rialto and the Leitz M 0.8 lenses there were zero compromises. When it comes to her vision Justine doesn’t compromise either, and even though this was a small budget film she said from the beginning it was going to get onto big screens so we shot it that way. 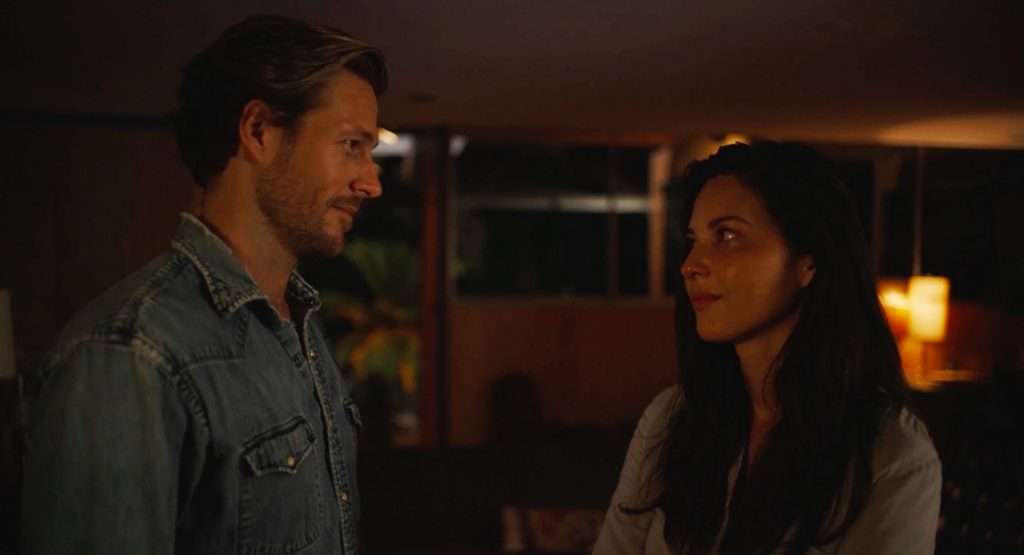 That big screen aspiration and our unwillingness to compromise our image was one of the reasons we chose to capture in full frame 6K. Resolution-wise, we wanted to make sure we had a negative capable of being seen on something larger. And we wanted the flexibility to move around the negative if needed, although in the end we never did.

The other consideration for us about 6K capture was hard drive space. It’s another thing that sold us on the Venice, being able to create HD proxies simultaneously when recording 6K X-OCN XT. We didn’t have a DIT on the film, just a digital loader and a tech. Avoiding transcoding and creating proxies separately saved us a lot of time and money and meant we could ship fewer hard drives to editorial and do so more quickly. 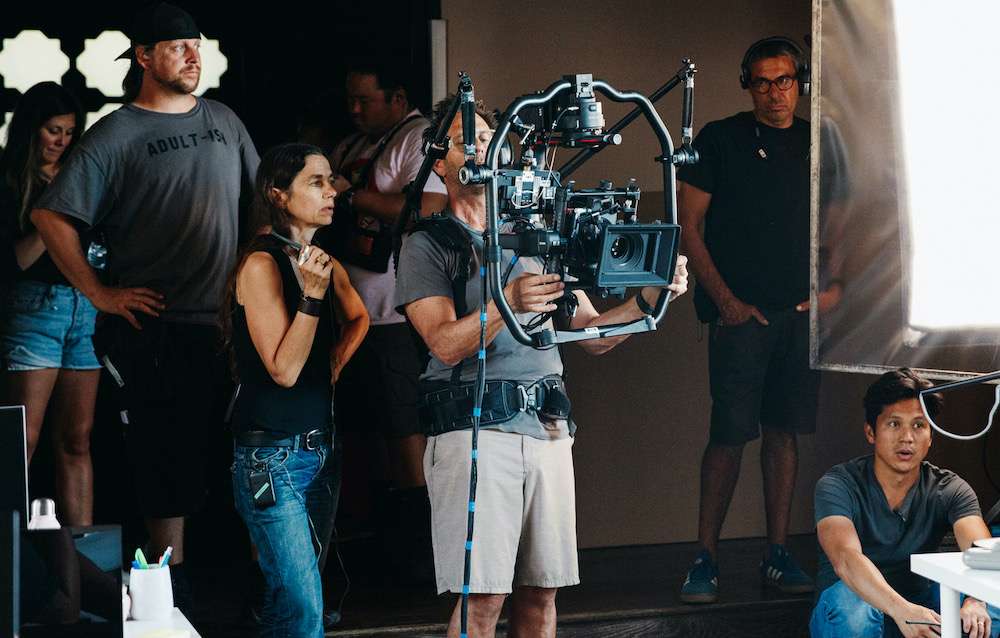 We tried to do as much in camera as possible as the film is not meant to be hyper stylised. We had created a custom LUT for the proxies but after a few days found we preferred one of the standard onboard LUTs. And sure enough, when we got to telecine we didn’t have to do a tremendous amount because it was all there already.

The most challenging scene in this regard was shot at dusk and I didn’t have the ability to drop lights in. But we got it without needing anything extra. I remember dayplaying as an AC on LA Confidential with Dante Spinotti ASC AIC and the amount of light he would have to push in to get this same look. He’s a master, but that was the technology of the time. I spent my whole career learning to shoot film and now we have cameras and lenses that can achieve these shots so confidently. It almost seems unfair.