French DP Jeanne Lapoirie AFC collaborated with Dutch provocateur Paul Verhoeven to give his most recent feature film, Benedetta, all the visual panache it needed.

Religion and sex have always made for a controversial cinematic concoction capable of arousing the most seasoned viewers, yet throughout his career Paul Verhoeven has repeatedly proven he can take things to a whole new level. This is also the case with his latest feature film, Benedetta, based on a true-story of the eponymous novice, possibly with a gift of miracles, who joins a 16th century convent in Italy only to enter into sexual relations with another woman. This leads her to clash with the Church, making the film a thought-provoking tale of faith, love and passion in the age of reason. 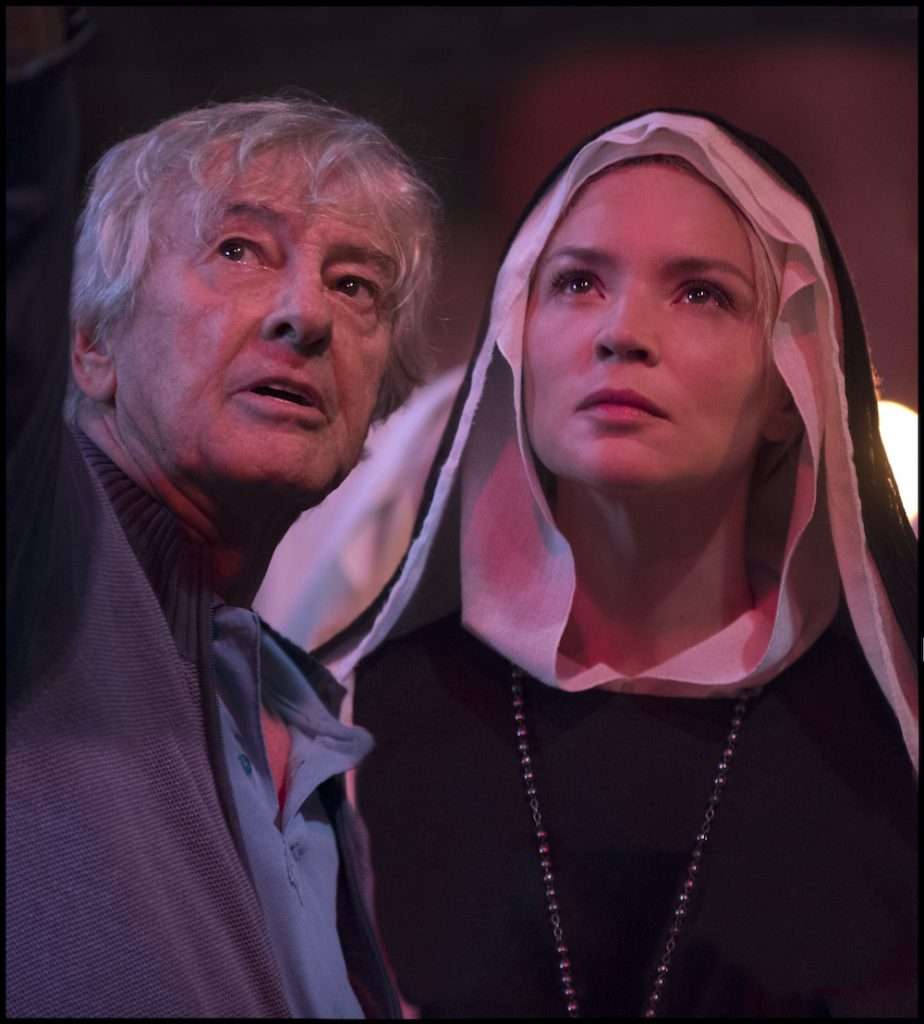 Verhoeven is essentially an authority on making divisive, erotically-charged films, yet Benedetta certainly benefitted from having a woman’s eye behind the lens.

“I was surprised when producer Saïd Ben Saïd offered me the job. I never thought I’d work with Paul Verhoeven,” says Lapoirie, a veteran DP with over fifty feature films to her credit, with the likes of 8 Women (2002) for François Ozon, Robin Campillo’s Eastern Boys (2013), and Les Estivants (The Summer House) (2018) for Valeria Bruni Tedeschi. “I liked the script, the characters, the challenge of shooting an unconventional period drama, but I accepted the project because of Paul.”

Visually, the director did not want to push the envelope, but rather to focus the viewers’ attentions on the intricacies of the story, yet he had a particular look in mind. 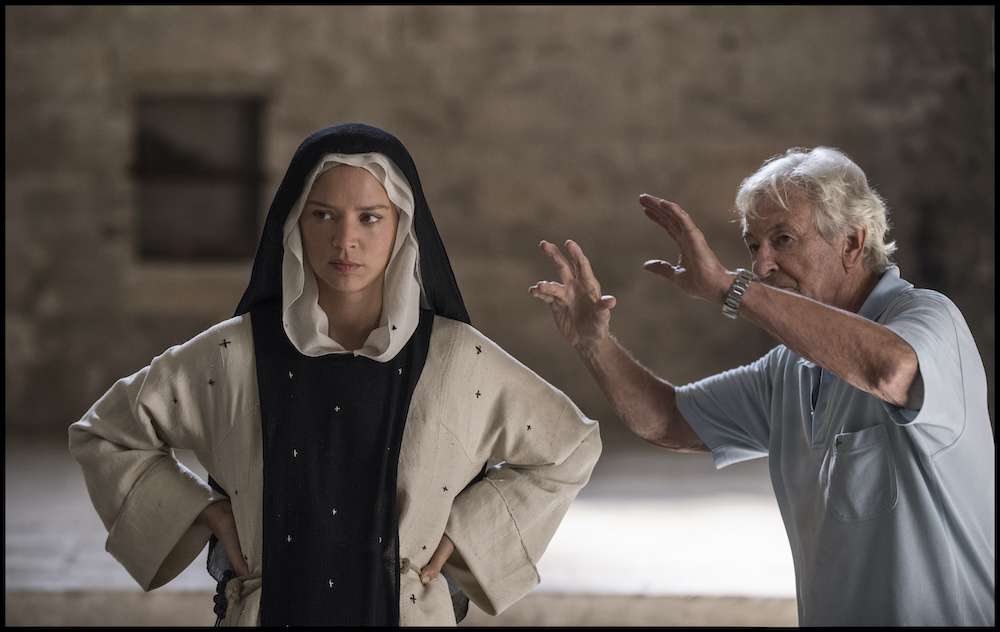 “Paul gives a lot of freedom to his collaborators, but he was adamant Benedetta should be shot handheld, but without being shaky. Just to have a bit of vibration in the frame, a personal touch, yet to retain the flavour of classic filmmaking,” explains Lapoirie. “He asked me to watch some Hitchcock and Fellini films, and Eisenstein’s Ivan The Terrible (1944, DPs Andrei Moskvin/Eduard Tisse), but said those were just a loose framework that I should infuse with my ideas.”

“I love colours. I can’t do a movie if there’s no contrast or colour.”

That she did, implementing her particular style on Benedetta’s canvas.

“I love colours. Not just my favourite palette, but all colours. I can’t do a movie if there’s no contrast or colour. I remember the joy of taking still photos on Kodak Ektachrome. While making my first feature as a DP, Les Roseaux Sauvages (Wild Reeds) (1994) on Super 16mm, I pushed the stock one stop to make the colours more vibrant,” asserts Lapoirie. “Period movies are often devoid of that, but not Benedetta. All the colours you see – those of the nuns’ habits, the covenant’s interiors and the candlelight – are integral to its visual language.” 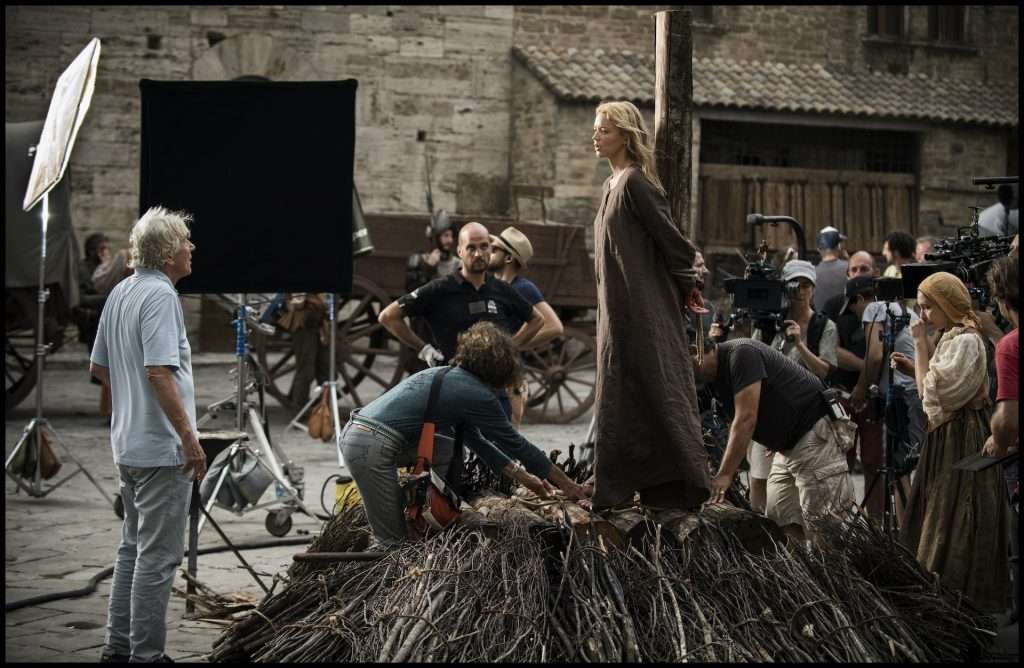 The film is set both in the covenant’s gloomy chambers and in sun-soaked exteriors of an Italian town, with a number of night scenes infused with a hellish red glow of a comet flying by Earth.

“I had a contrasty and colourful LUT that I had used many times before. It makes black a bit blueish, whilst other colours are more on the yellow side which melded nicely with red hues of fire and candlelight,” offers Lapoirie. “When we graded Benedetta with my colourist Serge Antony, most of the work had already been done.”

Lapoirie used a lot of her favourite lighting equipment, too. 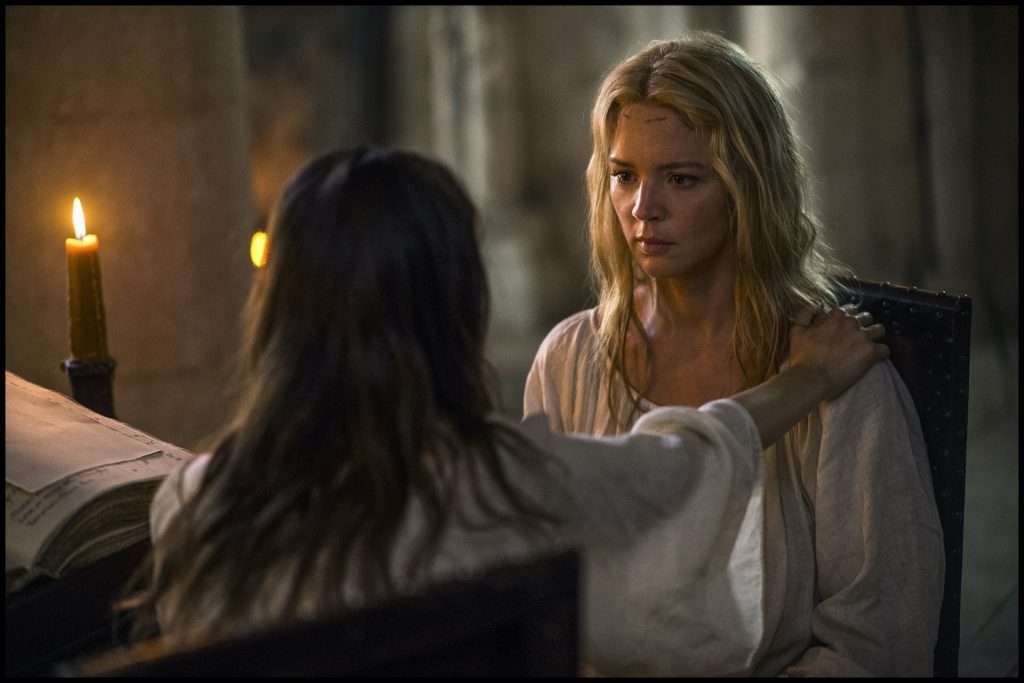 “It was mostly LED, a mix of SkyPanels, DMG Lumière SL1 fluorescent tube alternatives, Tungsten and HMIs that I was comfortable with. They matched really well with many scenes lit by candlelight and torches. I wasn’t afraid of darkness and characters staying in shadows at all. Darkness was my friend,” adds Lapoirie. “There was one particular scene on the convent’s roof that I had to light using a drone because we could not put a lighting big tower on the ground, but apart from that, I had a good level of control over everything. Pretty creative stuff.”

“I wasn’t afraid of darkness and characters staying in shadows.”

Lapoirie also brought her preferred camera and lenses to the project. “In the past, when I shot on film, I always chose Kodak stock. I shot a lot of films on 35mm, and know how to organise the set. I tested other options but nothing came close. However, after making the transition to digital, I use the ARRI Alexa Mini with the compact Angénieux Optimo spherical zoom lenses, mostly 28-76mm and 45-120mm. The only difference was that Paul wanted to have lots of coverage, so we shot with two Alexas, and I had the fast Leitz Summilux lenses for our complicated night exteriors.”

The film was shot between July and September 2018 on location, with a few greenscreen studio scenes done after the principal photography. Principal photography took place in Montepulciano, Italy. Other locations included Val d’Orcia and Bevagna, also in Italy, as well as the Silvacane Abbey and Le Thoronet Abbey, in France. Lapoirie’s only regret was that due to scheduling problems they had to shoot the exteriors first. 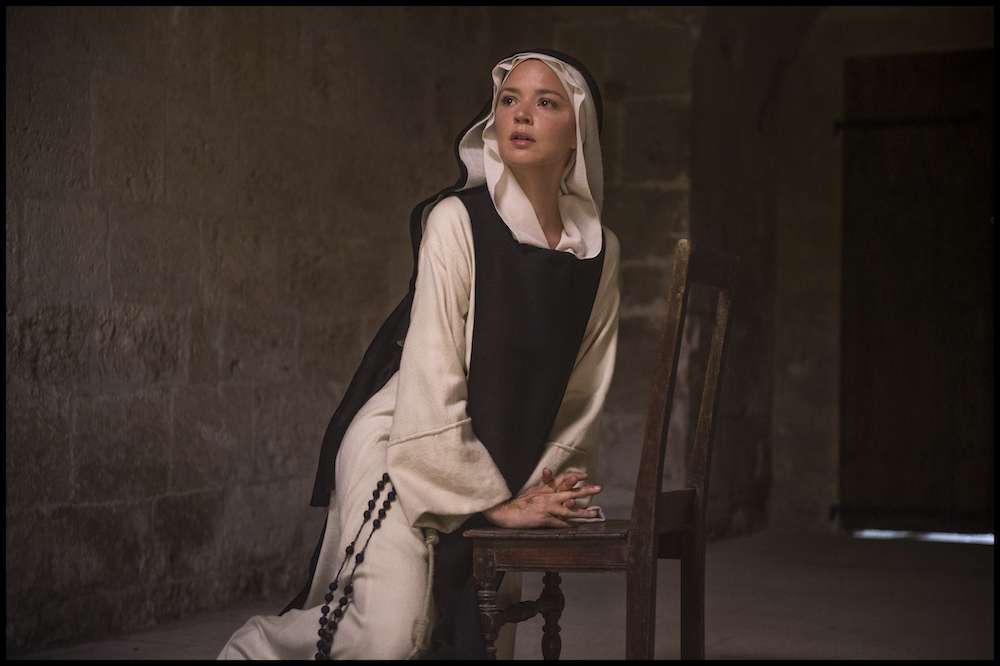 “I would have preferred September, with less harsh sun, especially since Paul likes to do a lot of shots for quick cutting and shoots them in order inside a scene,” says the DP. “We shot this complicated sequence for five days straight in a town square as if from the 16th century. Because Paul insisted on shooting chronologically, I had to prepare a lot of set-ups to keep the levels of light and shadow consistent throughout, no matter whether it was high noon or evening. It was a real challenge.”

Producer Ben Saïd has admitted that the story of Benedetta might be a “subject of controversy” and feared reactions from fundamentalist Catholic associations. Production was followed by a strong campaign of secrecy and no-one, unless working on the film, was allowed on the set.

“Not really,” she says. “Paul has a relaxed attitude towards this stuff, he deals with it with lots of humour. It’s rather a technical challenge with all the shots and close-ups. The crew and actresses Virginie Efira and Daphne Patakia adopted his mindset. 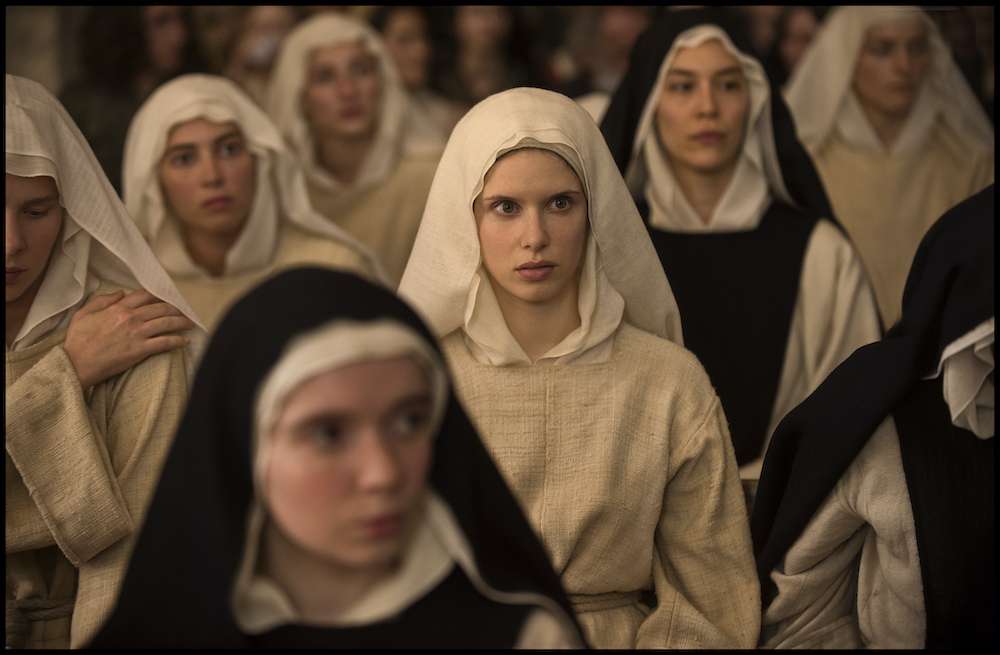 “You see, Paul runs a tight schedule. There isn’t a place for improvisation, everything is mapped-out. Everyone knew days before what we would shoot and what was going to be visible in the frame. The scenes turned out beautiful, colourful and spiritual. I’m proud of them.”

Lapoirie has a lot to be proud of, with Benedetta being a fearless cinematic feast of carnal pleasure and cerebral delight.

“You don’t see it but we had quite a small budget for such an ambitious project. We had to be creative with the challenges that lay ahead. I believe we fulfilled the film’s potential and made it visually exciting,” she concludes. 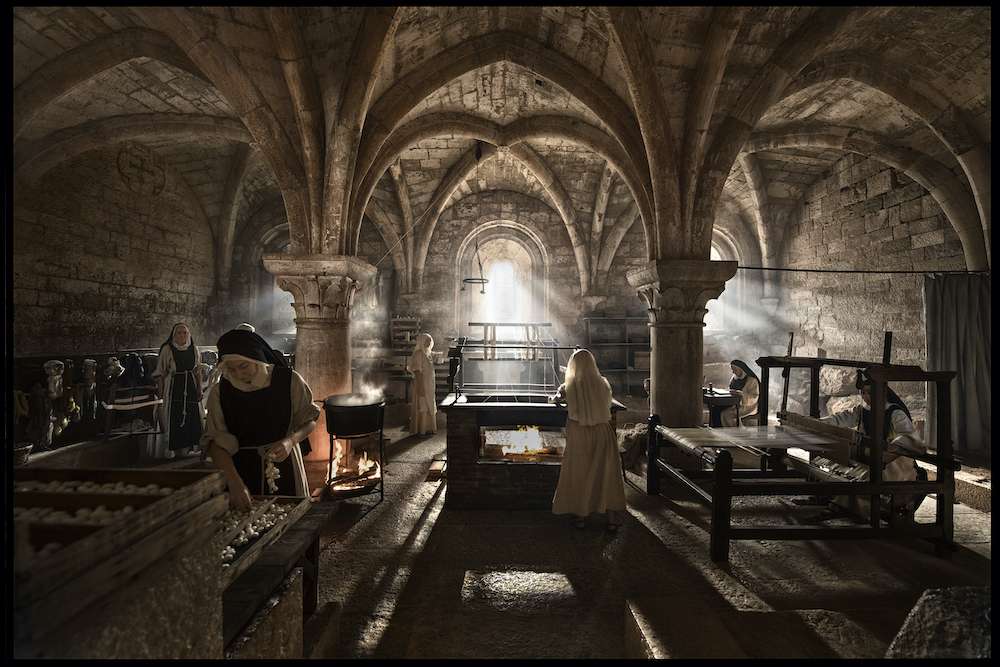 And whilst no one can predict whether it is going to join Basic Instinct (1992, DP Jan De Bont), Showgirls (1995, DP Jost Vacano BVK) and Elle (2016, DP Stéphane Fontaine AFC), in Verhoeven’s canon, it will definitely be remembered as one of his most visually-striking. And that is no small feat.