“I don’t see filmmaking as a challenge per se, but rather more as an opportunity to try something new, especially with the lighting and camerawork,” says French DP Bruno Delbonnel AFC ASC. “And this was exactly the case when Joel Coen called me and announced that he was going to make The Tragedy Of Macbeth as a thriller.” 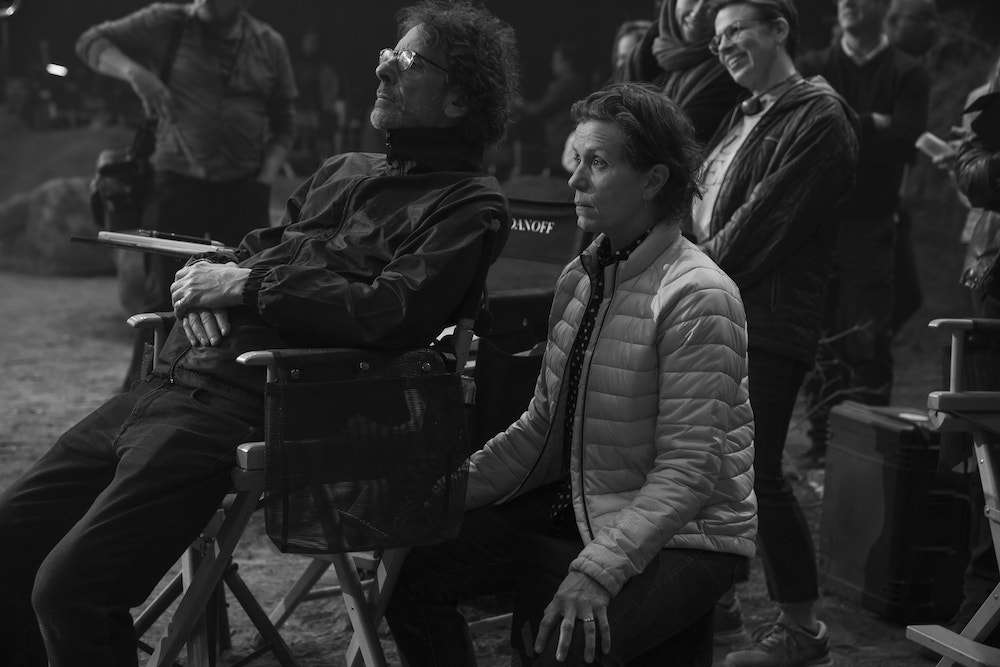 Starring Denzel Washington and Frances McDormand, along with Kathryn Hunter and Brendan Gleeson, The Tragedy Of Macbeth has earned rave reviews for its bold direction, fierce performances, as well as the otherworldliness of Delbonnel’s beguiling and lustrous B&W cinematography in Academy format. This earned the DP a Silver Frog at the 2021 Camerimage Festival of Cinematography. Since then, the film has been honoured as one of the top ten movies of 2021 by both the American Film Institute and the National Board Of Review. Delbonnel has also garnered Academy BAFTA and ASC nominations for his significant visual contribution to the film.

“Joel explained to me that he wanted to avoid shooting his adaptation of the Shakespeare classic as a stageplay,” Delbonnel continues. “He wanted it to be a movie, but was keen to explore theatricality, to bring a sense of the theatre to the cinematic experience.

“Also, the last thing he was interested in was realism, such as shooting in the highlands, in a Scottish castle and having people roaming around the landscape in purple heather. He wanted to shoot it all on a soundstage. These concepts put a new stamp on a story that has been told many times before on the big screen and made it very intriguing to me.”

Admitting to finding Shakespearian-English prose somewhat impenetrable, and in order to familiarise himself with story, Delbonnel immediately headed to his favourite book store in Paris and purchased French translations of The Bard’s original play. 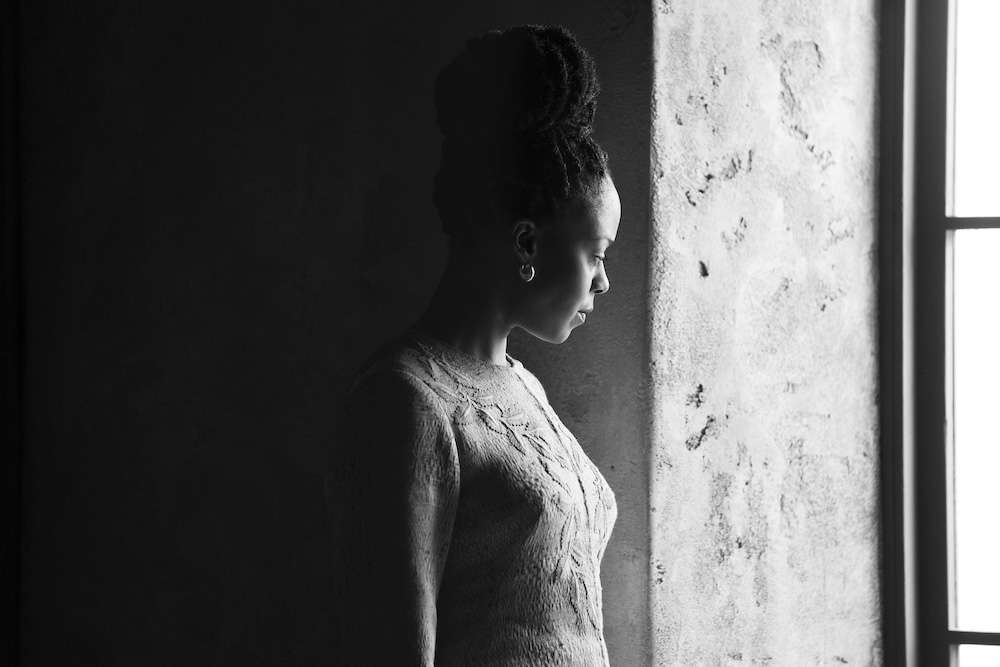 Moses Ingram in “The Tragedy of Macbeth,” premiering in select theaters on December 25 and globally on Apple TV+ on January 14, 2022.

In brief synopsis, Shakespeare’s Macbeth, thought to have been first-performed in 1606, dramatises the damaging physical and psychological effects of political ambition on those who seek power. A trio of witches convince the Scottish warlord Macbeth that he will become king, and when he reveals their prophecy to his wife, Lady Macbeth, she coaxes him to kill King Duncan and seize the crown. This soon leads Macbeth to further acts of murders, in order to cover his tracks and preserve his new-found regal status. However, whilst he becomes increasingly-tormented by the monstrosity of his abominable deeds, Lady Macbeth likewise finds her own sanity severely challenged by pangs of conscience.

Delbonnel, a five-time Academy Award nominee, previously collaborated with the Coen Brothers on the comedic portion of the anthology film Paris, Je T’aime (2006), Inside Llewyn Davis (2013) and The Ballad Of Buster Scruggs (2018), but The Tragedy Of Macbeth was the first time that Joel had directed without his brother Ethan by his side.

“Joel’s script used the original Shakespearian language, and as we discussed the process of how we might visualise his screenplay, we focussed-in on the rhythm of the language, written in iambic pentameter, and the power of the lines in different parts of the storytelling,” says Delbonnel.

“Also, Shakespeare’s ideas and dialogue were so complex and beautiful that we did not want anything to distract from the acting and the language. So we felt it best not to represent external reality, and that the simplest-possible visual form – a minimal abstraction of shapes, textures, spaces and faces – would be the ideal way to express things aesthetically.” 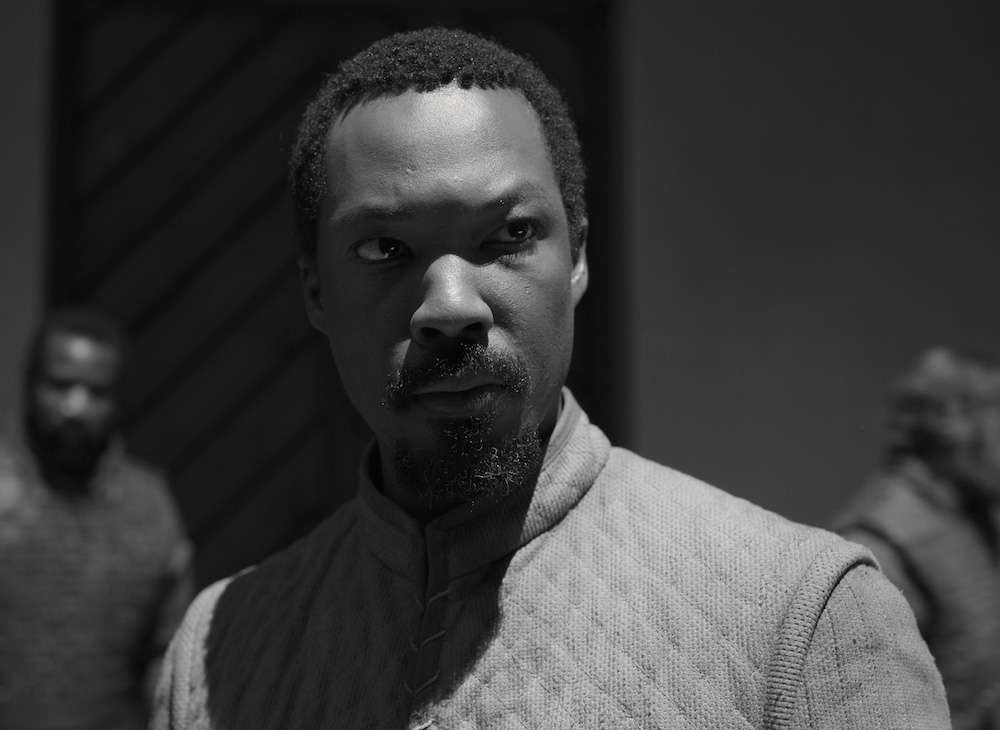 Corey Hawkins in “The Tragedy of Macbeth,” premiering in select theaters on December 25 and globally on Apple TV+ on January 14, 2022.

Coen and Delbonnel watched a number of earlier film adaptations of Macbeth, including productions directed by Orson Welles (1948), Roman Polanski (1971), and Justin Kurzel (2015), as well as Kurosawa’s Throne Of Blood (1957), contemplating how sequences such as the famous ‘dagger’ speech, and the different murders, had been variously portrayed on-screen.

However, in terms of the overall look, Delbonnel says a trio of references formed the underlying foundations of their creative visual thinking.

“An important reference for us was Carl Theodor Dreyer’s silent, B&W, historical film, The Passion Of Joan Of Arc (1928, DP Rudolph Maté ASC), with its many close-ups and fabulously simple sets,” he remarks. “Additionally, the essential, stripped-down forms in the tabletop architectural models that were devised, lit and photographed by James Casebere ­– one of the ‘Picture Generation’ of post-modern artists – were further inspiration as regards our ideas about set design and lighting. When it came to thinking about our exterior backgrounds, the layered landscape illustrations that often accompany Japanese haiku poems, such as mountains ranges shrouded in mist, had an appropriate theatrical lyricism about them.” 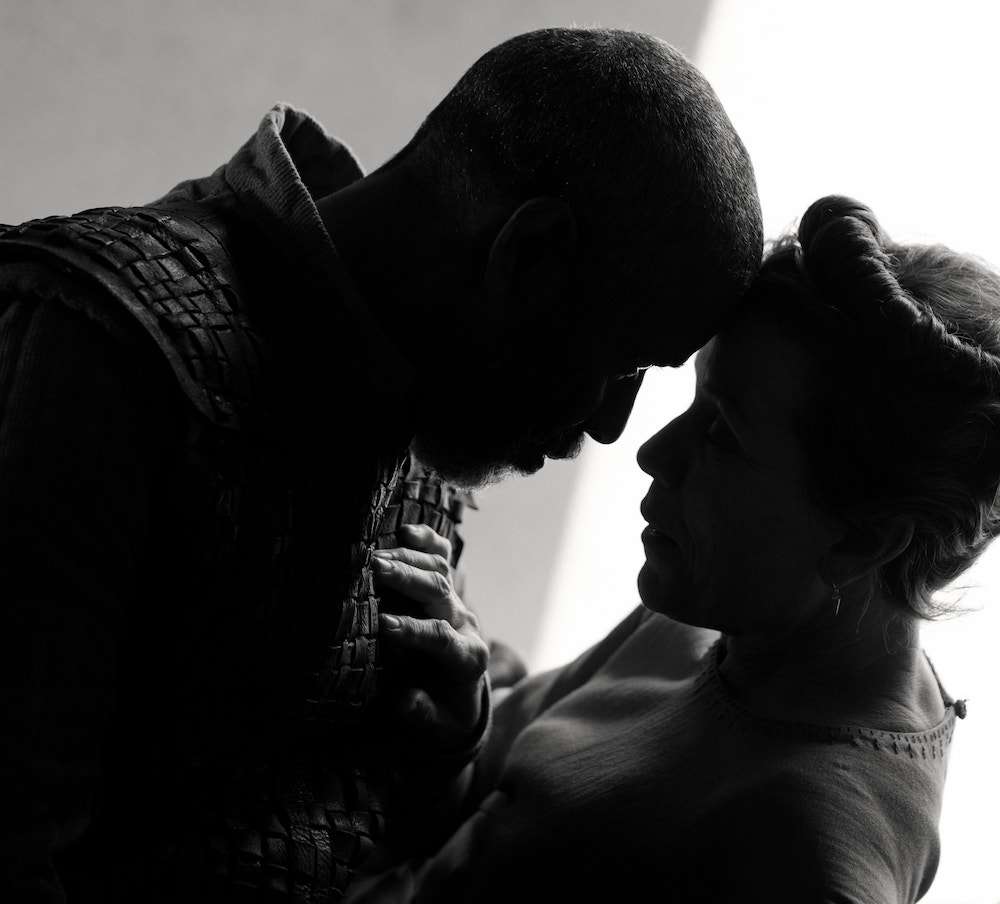 Denzel Washington and Frances McDormand in “The Tragedy of Macbeth,”

With all of this in mind, Delbonnel collaborated with production designer, Stefan Dechant, to develop sets that spurned ornamentation and practical lighting as much as possible, stripping the imagery down to the barest of essentials.

“There was no furniture, no carpets, practically nothing to distract from the performances,” Delbonnel explains, “and from this idea came the notion of shooting in B&W and framing in Academy 1.37:1 aspect ratio.

“In many ways, B&W helps the image to become more abstract, because you don’t relate to anything much apart from the performances and the atmosphere created by the lighting. For me, the Academy format is probably the most beautiful format, because when you shoot a close-up, it really is a close-up.”

“The minimal abstraction of shapes, textures, spaces and faces was the ideal way to express things aesthetically”

Indeed, this in-turn informed Delbonnel’s choice of ARRI Alexa LF camera and its 14+ stops of dynamic range, paired with the look of Cooke S7 lenses, to capture the portraiture, with a target of T4.

“On the advice of my longterm colourist, Peter Doyle, we shot in colour and converted to B&W in post, as this would allow him to use the blue channel as a form of filtration to soften the sharpness of the look on skin and costume, and the other RGB channels to adjust the grey scales in the final picture,” says the DP. 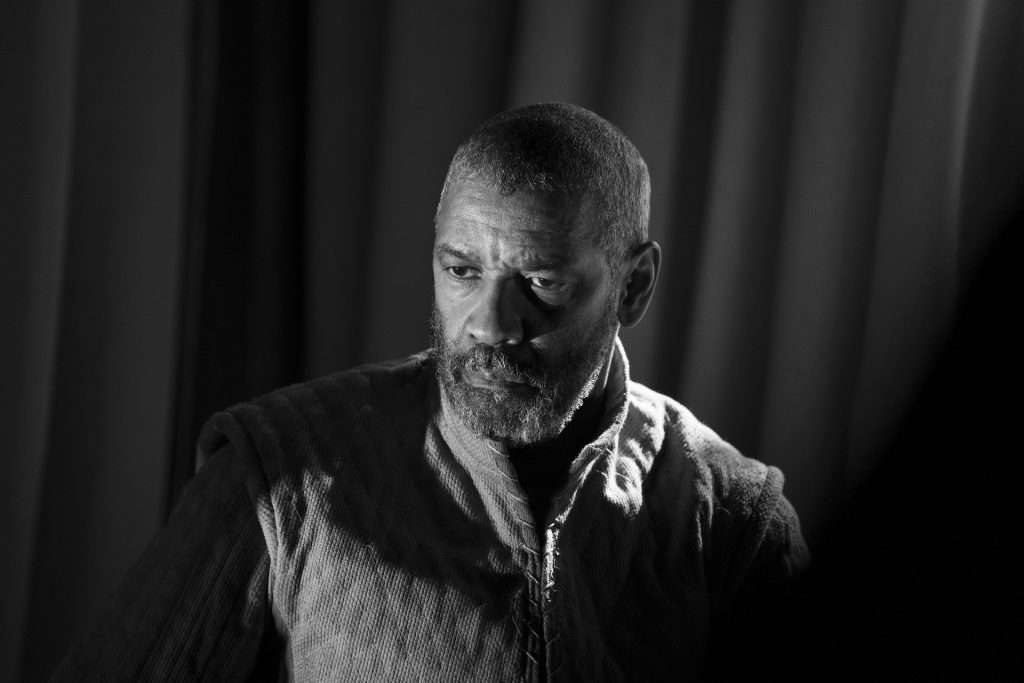 Denzel Washington in “The Tragedy of Macbeth”

Principal photography on The Tragedy Of Macbeth took place on sets constructed inside the voluminous Stage 16 at Warner Bros. Studios in LA, which included the film’s exterior scenes that had 150-meter-wide painted backdrops, designed by Dechant.

Production started in early February 2020, however, the arrival of Covid-19 in the middle of the seven-week production schedule, led to a four-month shutdown, before shooting resumed at the end of July.

Delbonnel says he likes to approach cinematography as if it were a musical score, and with The Tragedy Of Macbeth this created the opportunity to play with the concepts of light and dark in the representation of different beats in the storytelling.

“It was about trying to shape the flow of the images, as if they were a musical score,” he says. “At the beginning of the movie it’s all grey and foggy, there was no black or white. But then, as the plot thickens, we shifted the look away from grey into atmospheric B&W, sometimes with silhouettes, sometimes with harder lighting, although I would not describe that as noir. 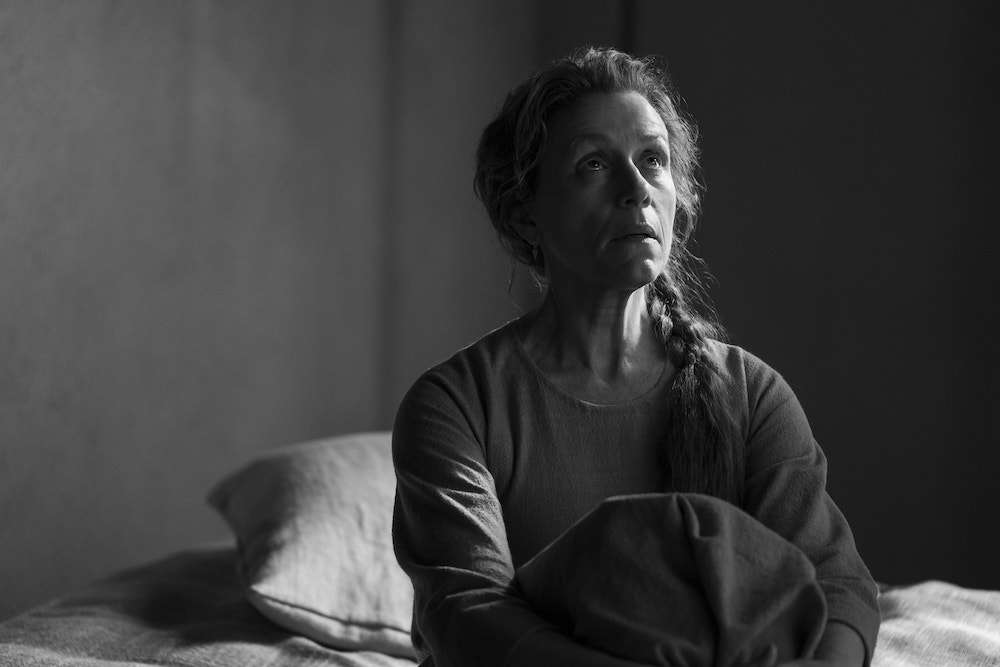 “The light in the film was never justified by the movement of a character. It was more of a graphic element, often with ambiguity about whether it might be day or night, shifting between dark and shadowy, grey and soft, looks according to the ebb-and-flow of the murder and madness in the story.

However, the relatively short production schedule, combined with the need to create a steady flow of expressive, often sharply-cut, lighting designs, meant having to eschew the use of Fresnels. This saw Delbonnel working closely with gaffer Mike Bauman, and lighting desk operator Dave Kane, to introduce remote-controlled, rock ‘n’ roll, concert-style moving fixtures, in the form of ETC’s SolaFrame Theatre lights. These deliver constant, high-CRI, bright white illumination, the ability to focus the light, incorporate gobos for hard edges, and can project animation effects through prisms. 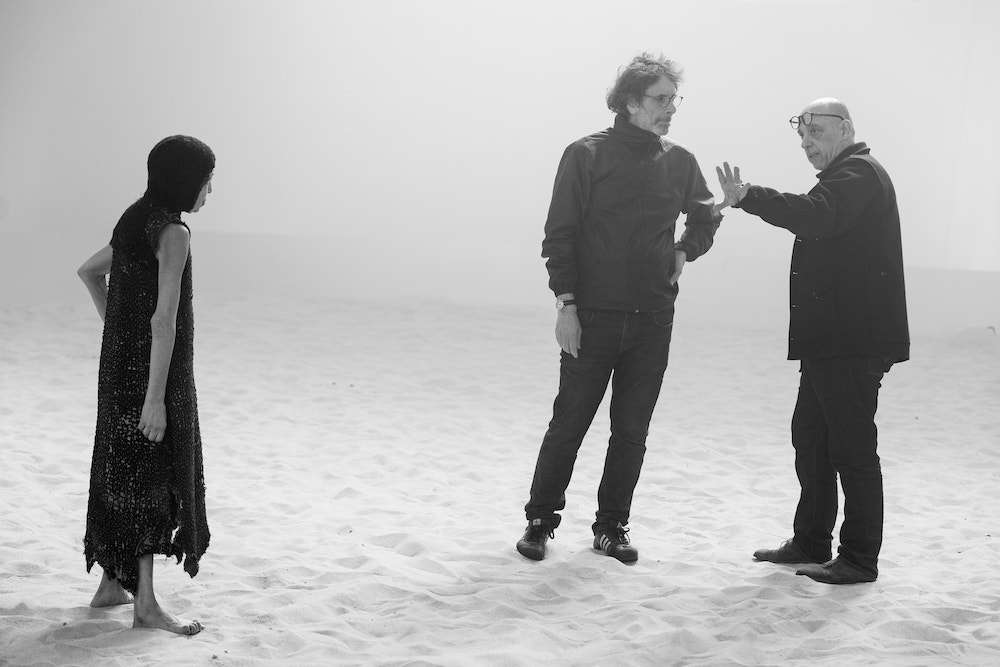 Kathryn Hunter, writer/director Joel Coen and cinematographer Bruno Delbonnel behind the scenes of “The Tragedy of Macbeth”

“I knew that no Fresnels would give me the very hard shadows I was looking for, so we moved toward these rock ’n’ roll lighting systems,” says Delbonnel. “With the SolaFrames we could create lines, stripes and sharp shadows on the set using the adjustable shutter blades. They also proved to be quick and efficient on our different lighting set-ups, as they bypassed the traditional, tedious and slow process of the lighting crew having to move, flag and adjust individual fixtures in greenbeds above set by hand from mechanical lifts.

“For the key ‘dagger’ scene, as Macbeth walks along the colonnade, we designed metal gobos in the shape of the arches and the columns, and carefully aligned 15 SolaFrames side-by-side on-set. What you see on-screen is not the actual shadow of the arch, but the projected light through the gobos, which was pin-sharp.

“We also used multiple SolaFrames to project animated cloud effects onto our backdrops, and frequently used them as the source of bounced light on the actors. As they are remote-controlled, I was able make adjustments quickly, and could light the sets in a way that gave the actors a playground for freedom of movement. I told Denzel he could move wherever he wanted, and play with the light and shadows, and sometimes be in silhouette.” 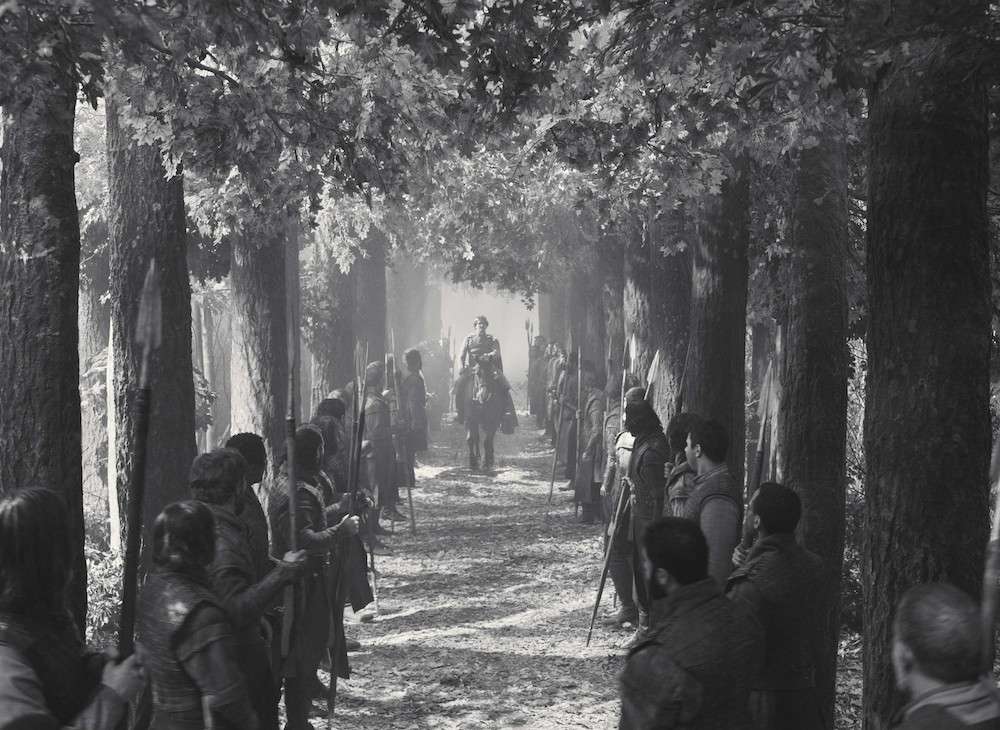 Delbonnel concludes with a note about his crew. “The Tragedy Of Macbeth is quite different to other productions I have shot. It proved a wonderful experience, and I thank my team for their help – gaffer Mike Bauman, dimmer-board operator Dave Kane and rigging gaffer Adam Harrison, my 1st AC Andy Harris and key grip Ray Garcia, DIT Josh Gollish and my colourist partner, Peter Doyle, who completed the final grade. But most of all, I want to say how fortunate I was to collaborate with Joel, and the opportunity he gave me to create something very special.”