But when it was time to work on the 2020-2021 season they faced an extra challenge— the pandemic was in full swing. This meant shortened 10-hour days, smaller crews and safety protocols. “We were the first test show to start up again. Production would have been set back another six months if S.W.A.T. had failed,” explains Kenny. 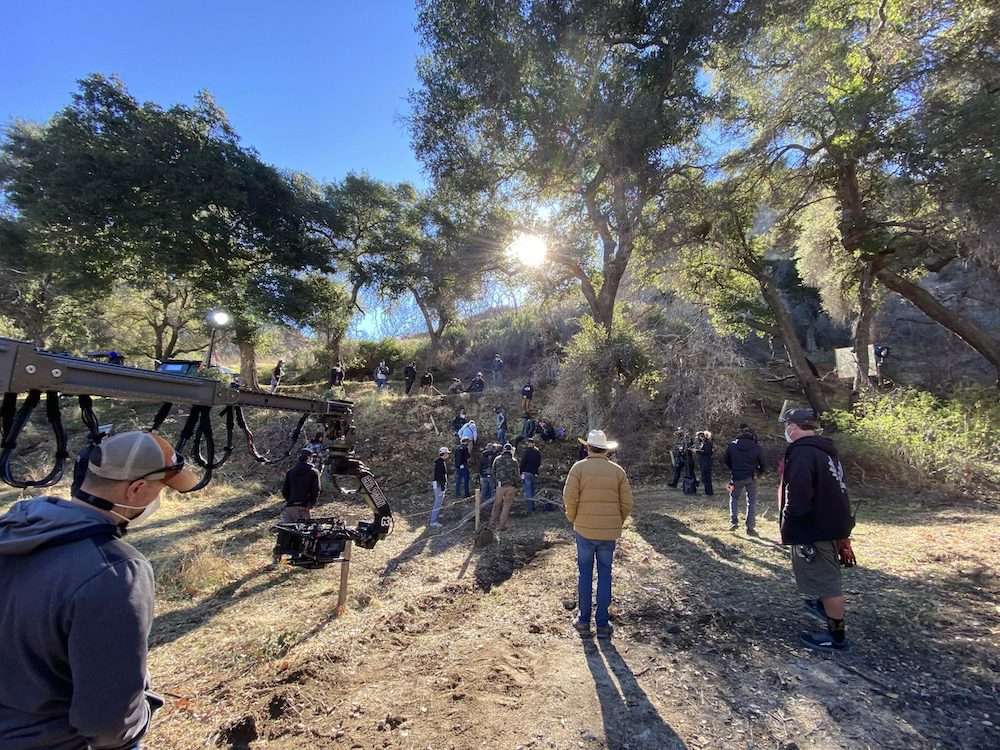 “Our camera crews were required to social distance from both actors and each other; cameras moved further apart, crews were limited in size and segregated between the cast, A crew, and B crew. Video village, which once gathered many crew and guests, was eliminated, replaced by multiple video stations, some of which were sent to remote areas allowing the writers upstairs and producers to see images live from an increased number of monitors.”

When planning gear for the new season, dependability was at the top of Kenny’s list. Production moved up to 8K RED Monstro cameras, supported by tools like Teradek Bolt 4K Max, SmallHD 17” 1703 monitors, DJI Ronin and Steadicam Air. There was no skimping on tools when it came to helping the crew make their day.

With so many stakeholders relying on monitor viewing as a safer way to collaborate, a reliable, real-time camera signal was vital. So the show’s three cameras were each outfitted with Teradek’s newest generation wireless video. The Bolt 4K series is the first generation to include the game-changing BB3 chipset, made to deliver reliable signal transmission and reception over more frequencies (13x 40MHz), faster reconnection times, automatic signal switching, and a more robust frequency-hopping algorithm. It fit the bill to serve S.W.A.T.’s high-traffic locations with excessive interference from other wireless devices. And while its predecessor accommodated four receivers, the new BB3 equipped Bolt 4K systems sync up to six transmitters to enable more multiple points of viewing so necessary under remote conditions. 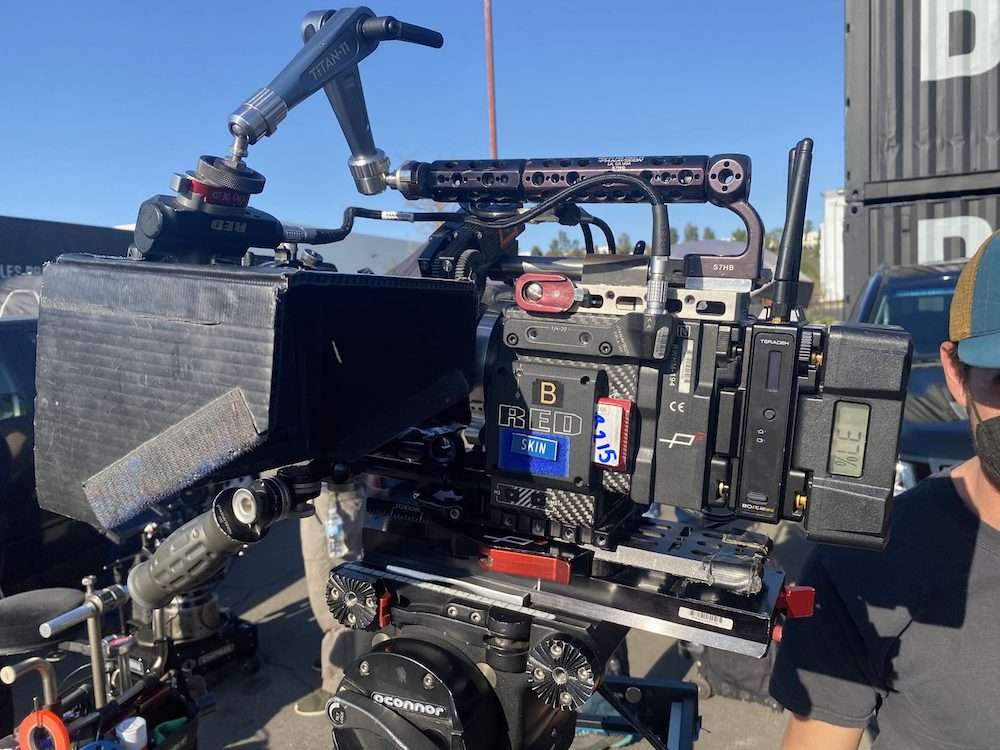 “We could not have done it without the Bolt 4K Max,” adds Kenny. “The newer system is even more dependable under challenging locations. It is fast to set up and has a quicker reconnection rate than previous designs and it transmits longer distances where proximity between transmitters and receivers is no longer possible. This is especially true when on location—shooting in small rooms, where multiple video signals are required to transmit through walls and other barriers.”

Case in Point—1000’ to a Downtown Rooftop

One location was the Presidential suite of the Biltmore Hotel in busy downtown Los Angeles. The script called for police surveillance 1000-feet away, across a park, on top of the 26-story City National Bank building. With Bolt Max’s 5000’ range, the distance was not an issue. For the rooftop P.O.V shot Kenny placed a 1000mm lens on C-camera rigged with the Bolt 4K Max transmitter. “Within the hotel suite we staged the actors near the window,” shared Kenny. “On a monitor inside we watched what they were shooting, live with zero delay—through walls, and microwave towers, amid a crowded sea of city cell phone signals. It was amazing in a CIA-scary kind of way.”

Then there are the frequent vehicle chases that fill the episodes. Whether it’s a car, truck, train, boat or helicopter, B or C cameras were rigged with the new Teradek system. “Even on a racing speedboat, the wireless signal stayed strong with no lag. It couldn’t have been done without the Bolt. It just worked and that’s the only way we got through the show,” says Kenny. 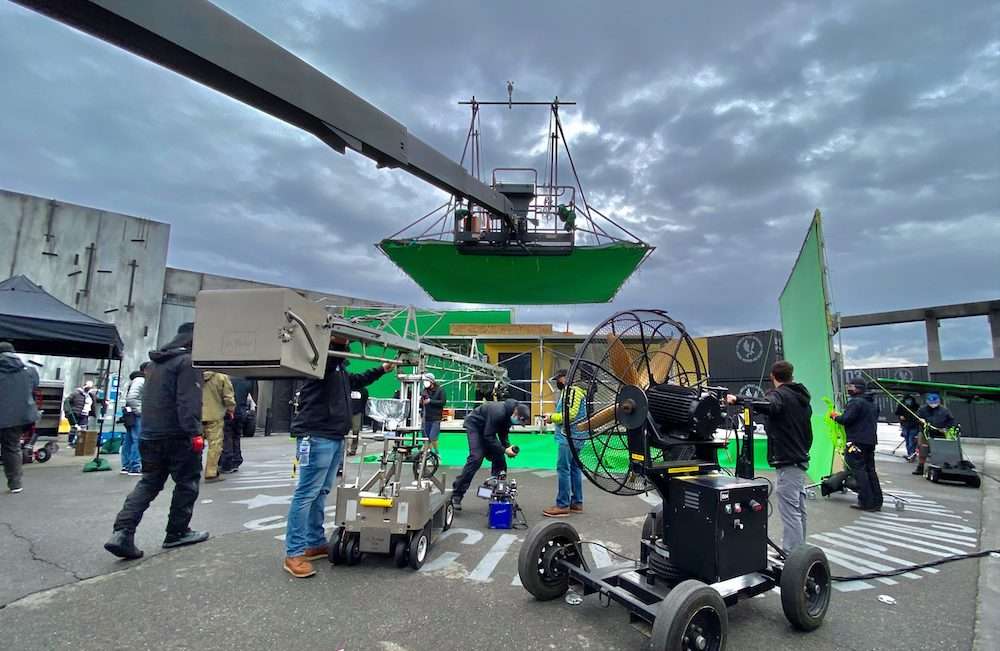 A veteran of numerous high action projects, Kenny knows his way around aerial shooting, especially helicopters where he’s logged thousands of hours. For a scene shot through the open door of a Black Hawk helicopter Kenny admits he had to cover his eyes a few times as they flew through the city from 4’ off the ground to 1000’ altitude. Still, the Bolt beamed an uninterrupted signal back to the ground crew, writers, and producers in their assorted locations.

“On S.W.A.T. the cameras are always moving,” he stresses. Having reliable wireless transmission smoothes the way, like when they do their signature swirling oners (360-degree shots). Hidden in a closet or behind a column, Kenny would watch a monitor, pulling iris within a stop that might range from a 2.8 to a 16. “It was like playing piano with a hand/eye thing going on. There was no room for delay–it just had to work–and it did.”

Kenny says, “It’s all about solving problems out there.” He was particularly happy with the addition of the Bolt App for his iPhone. Its Spectrum Analyzer and Wireless Health analysis tools are designed to manually designate specific 5GHz channels, and monitor interference.

“It makes syncing to another receiver simple—showing status, configuration, and pairing with different devices. Before the Bolt App, pairing manually was always an issue. My 1st AC would take 20 minutes to find something small enough to fit into the receiver. I still recall in season 2 when we didn’t know how to dedicate a channel to eliminate conflict between the Ronin 2 and the Preston MDR signals. But the now the Bolt App lets us dedicate channels to prevent conflict.

“This season we had three or sometimes four different wireless video systems on set at the same time, plus signals from 25 iPhones, Wi-Fi and unshielded cable going through the air—a lot of wireless conflict. But Teradek’s Spectrum Analyzer always found the right signal. When you get the tools and know how to apply them you solve the problem!”