Johanson became national president in 2008 where in his words he, “Wanted to guide the society to becoming more inclusive and to play a bigger role as an international society, not just domestic.”

He also felt the ACS needed to become a more active and interactive society and to communicate more openly to their members. With commitment and vision he guided and oversaw the ACS play a more active role with First Australians and as a group, impacted internationally via IMAGO.

Johanson also ensured the ACS’s interaction broadened locally and he facilitated the society becoming more proactive among other industry groups.

He added, “I desperately wanted to have the old boys’ club tag vanquished and I think we have achieved that. I’m very proud to have been and to continue to be a part of a society that recognises individuals and forges amazing relationships and friendships with our members and our fantastic sponsors.” 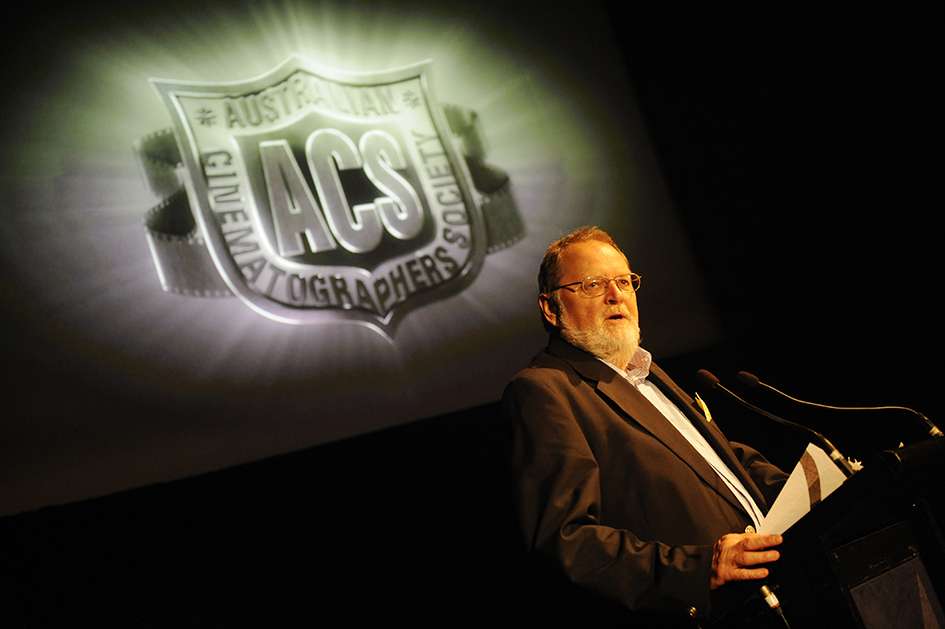 Commenting on his reasons for finally stepping down after 15 years Johanson added, “It has been a great honour and I’ve really enjoyed my time as national president. I’m also very proud of what the ACS has achieved during my tenure, but the simple fact is it’s now time for a fresh face at the helm. I’m delighted that in Erika we have our first female national president and I will be supporting her and the ACS in every way possible moving forward as I continue in the role of sponsors’ and sponsorship manager.”

Erika Addis’ life as a cinematographer had its beginnings when she worked as a lighting assistant on The Fourth Wish and clapper loader on Stormboy for the South Australian Film Corporation. Those first steps were quickly followed by three intense years studying cinematography under Bill Constable at the Australian Film and Television School in Sydney. She fell in love with documentary at that time and pursued that path for much of her career which includes work such as Serious Undertakings, My Own Flesh and Blood, For All the World To See, Emily’s Eyes, Father’s Footsteps, Brazen Hussies, For Love Not Money, The Tightrope Dancer amongst many others.

On nominating for and having been elected ACS national president Addis said, “The time feels right, both for me in my career trajectory and for the ACS in its history. I am proud and humbled to be charged with the responsibility of leading the ACS. The purpose of the ACS is to nurture the knowledge and understanding of cinematography and all those who practice it. I look forward to working closely with all the ACS team and especially Ron Johanson OAM ACS, to further this work. I acknowledge Ron’s considerable legacy and support, that has enabled me to take on this role. 2022 is the tenth anniversary of the formation of the ACS Women’s Advisory Panel, and throughout those ten years Ron steadily worked to ensure the integration of the WAP into the fabric of the ACS. The Society can all rightly be proud that the WAP recently evolved into the Diversity, Inclusion and Reconciliation working panel in 2021.”

Throughout the last decade Addis has indeed been closely involved with the evolution of the ACS from being a white, male dominated organisation to one which is working towards being a more inclusive and diverse society.

She continued, “One of the figures that shows that change is the number of accredited women in the ACS – accreditation being the highest recognition the ACS bestows. Between 1958 – 2012, six women out of hundreds attained accreditation. Between 2012 – 2021, twelve more women have achieved that recognition. Visibility of women in the ACS has increased greatly in this decade, and that creates a richer and more inclusive environment, particularly for young emerging cinematographers.”

It’s clear that Addis will embrace the role of national president with the same great passion and commitment that Johanson did as she explained, “The ACS is full of amazing creative members who make extraordinary work and share it and how they did it in a heartbeat. That professional camaraderie is exceptional and rare. The collected knowledge and expertise of our membership is second to none of any cinematography society in the world and the excitement about the future of the ACS amongst the members is palpable.”

In short, due to Ron Johanson’s amazing tenure as national president and now with the extremely talented and experienced Erika Addis at the helm the ACS has never been in better shape.

Commenting on her vision of the ACS’ future Erika Addis concluded, “I very much want to build on Ron Johanson’s achievements, particularly that of putting the ACS onto the world stage by successfully joining ACS into IMAGO, the international association of cinematography societies. I also want to grow the ACS’ online presence with increasing depth and variety of content on the website and in social media, grow the diversity and inclusivity of the ACS and ensure good governance is in place.”