Andrew Levitas’ Minamata provided French DP Benoît Delhomme AFC ASC with the opportunity to make a meaningful homage to one of the most important photographers of the 20th century.

It is not particularly difficult to grasp why W. Eugene Smith is considered a legend. All it takes is to look at his World War II images, or the photo essays he did for Life Magazine. Painstakingly composed, shot exclusively in B&W and thousands of shades in-between, his works express a range of emotions and ideas that affect both the mind and the soul. He was at his best when he dealt with heart-breaking and infuriating matters, such as the effects of corporate mercury poisoning on the people living in Minamata, Japan. He went there dubiously in 1971, but stayed for three years, documenting the physical disfigurations and neurological disorders, giving the local community a voice that was heard worldwide. Now Levitas’ film uses his perspective to recount these events and immerse the viewers in the story. 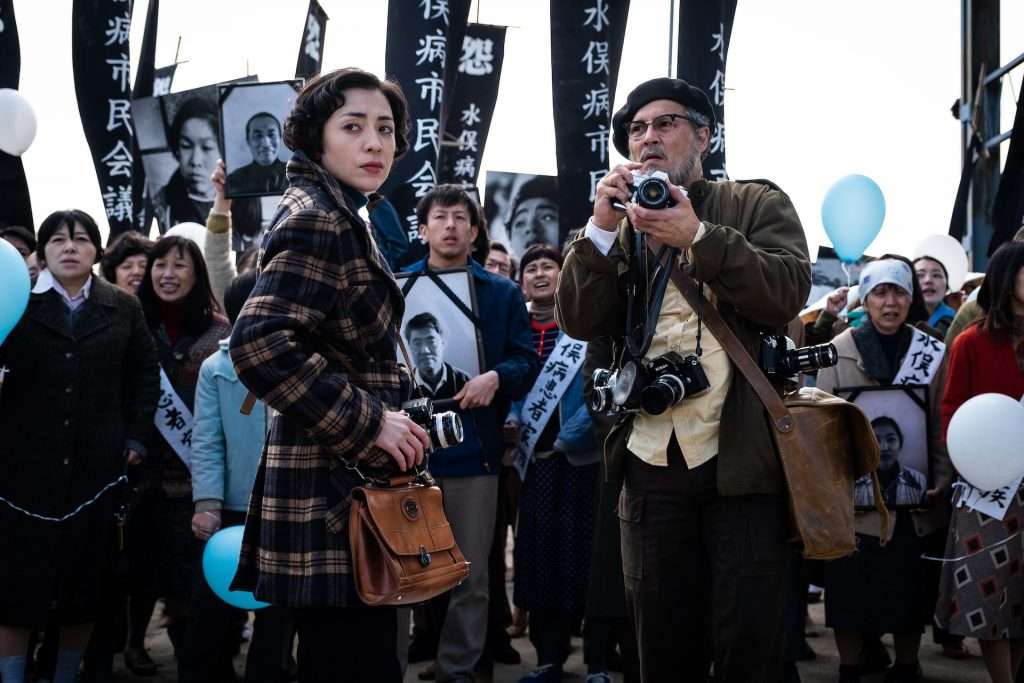 Though Delhomme had access to the W. Eugene Smith archives, especially the contact sheets showing the photos he took before and after the famous ones, the DP did not want to simply imitate the photographer’s style. Rather, he wanted to create an environment in which he and the director could depict Smith’s artistic persona and detail the Minamata tragedy.

“I discovered his work in my teens when I started to experiment with B&W photography. I cherished these books about photographic techniques that Life Magazine published in the ‘70s. They were showing how the American masters were making iconic images. I loved all the anecdotes about Smith working in his darkroom like a mad man to produce the best prints,” says Delhomme. “I loved his crazy search for perfection. I loved how he had to immerse himself in his subjects, how each of his images becomes so personal to him. Like an auto-portrait and a portrait of the world in the same time” 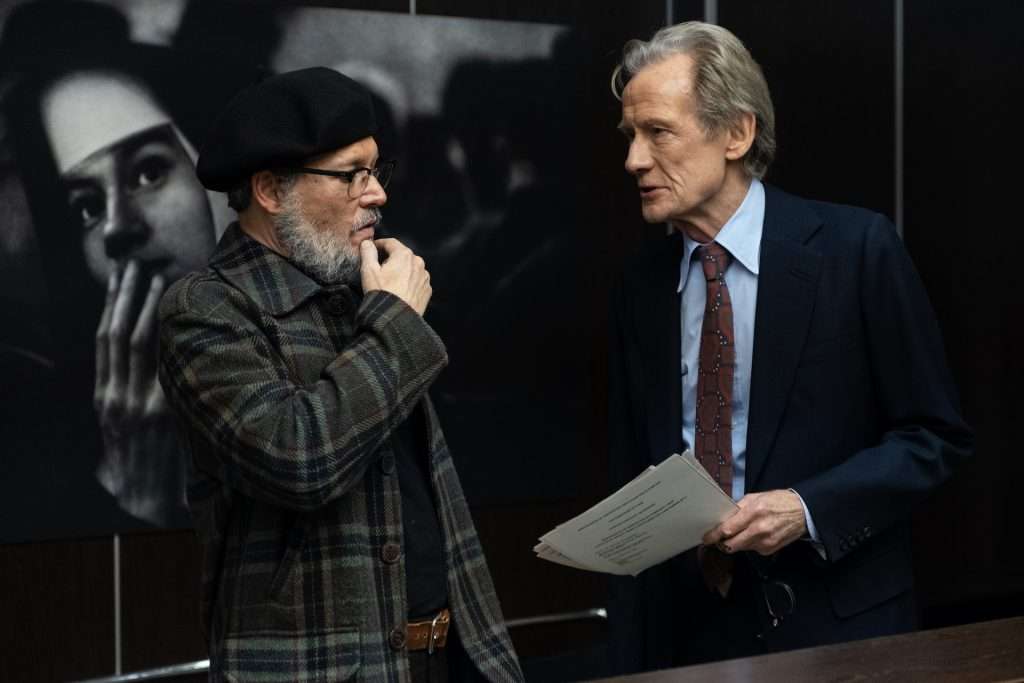 The cinematographer took great pains to free himself from the typical constraints of a film set and worked analogous to a still photographer.

“Just before Minamata I had shot At Eternity’s Gate (2018), Julian Schnabel’s film about van Gogh, on which I developed a new way to operate handheld. Not from a shoulder point-of-view, but with the camera directly in my hands. Then, right before starting prep for Minamata, I discovered the Rialto extension of the Sony Venice at the Camerimage Festival in Poland. I immediately thought it was the only film camera to shoot in the spirit of Eugene Smith. The perfect tool to find my frames with the freedom and spontaneity of a stills photographer.” 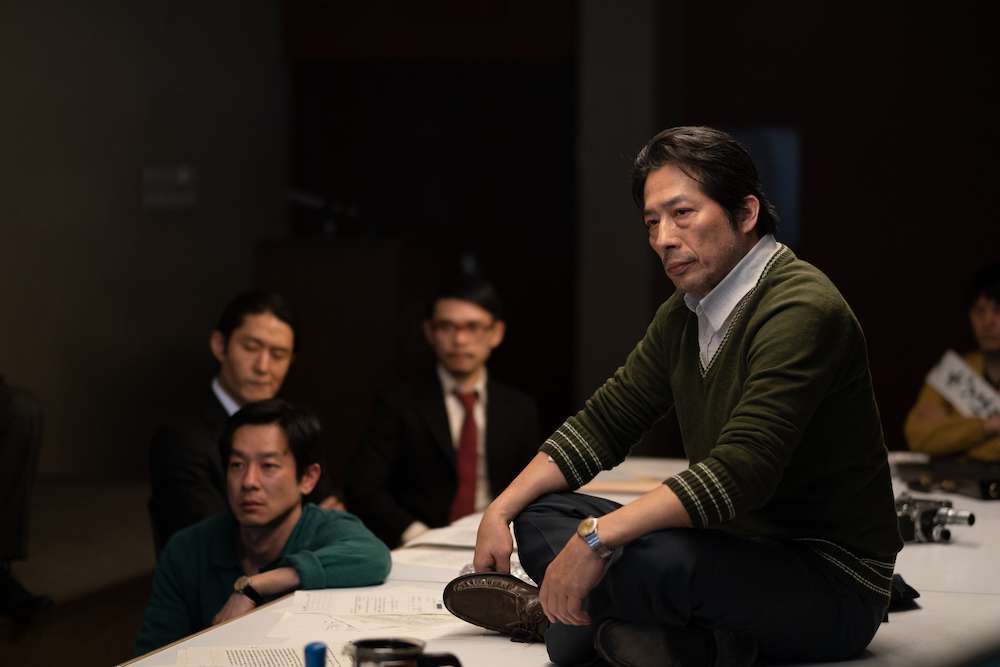 Delhomme was also adamant on using only a few lenses for the entirety of the 40-day shooting period.

“I didn’t want to surround myself with a lot of equipment on this film,” he explains. “ So I chose Leica M 0.8 lenses because they were made for the best stills photographers and not for cinematographers. I love how they react to quick focus adjustments and how precise they are, but most of all – because they were so small they supported my Rialto concept of working like with a still camera.

“When you shoot such an intimate film dealing with difficult emotions, you have to make the technique invisible, and you need to become invisible too. You don’t want the actors to feel the technique. With a backpack and camera in my hands, I was just a guy sitting in front of people, or walking around, being one of them. This opened a lot of opportunities to shoot in a way Eugene Smith might have done it.” 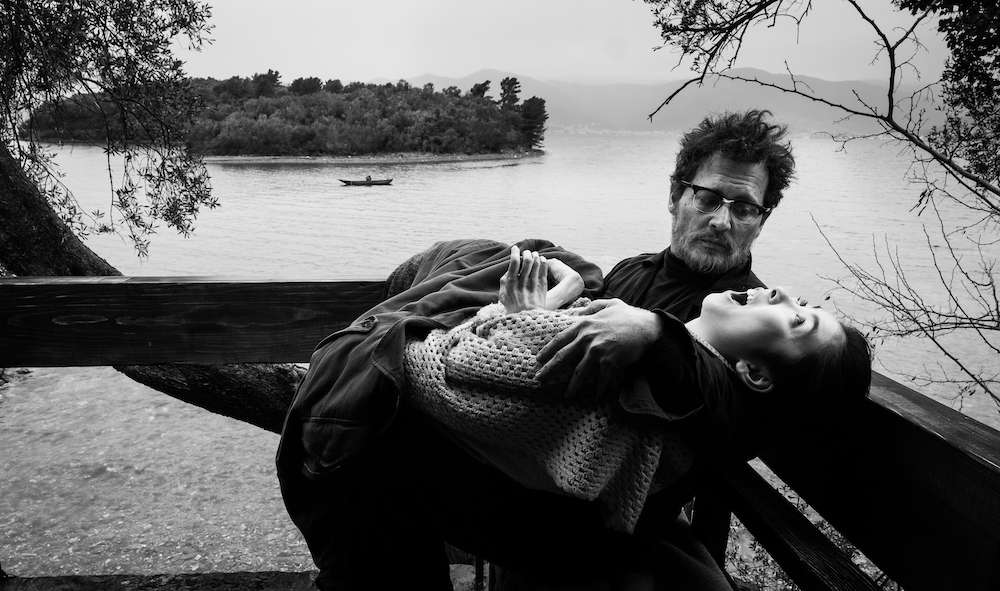 This was critical for Minamata’s narrative that gradually deepens the viewer’s attachment to the photographer who is in a purgatory of his own making when we first meet him.

“The film consists of two parts. In the beginning, Smith is driven by his addictions, sort of trapped in his New York loft/darkroom. He’s a recluse, takes photos through his windows like a sniper,” says Delhomme. “I shot this like a freestyle American indie from 1970s. Smith is a man thinking in B&W but I wanted to go to the opposite spectrum, and instead of desaturating my images I used primary colours to get the audience into his confused mind. We reinforced that feeling during the DI with colourist Peter Doyle who made the red of Smith’s darkroom or the neon blue of his bed area more intense, close to the limit of saturation, sort of weird.”

“For the second part, set in Japan, I wanted to stay close to how a Japanese movie of that time would have looked like. Of course, I was constantly inspired by photos from Eugene’s book Minamata: A Warning to the World. I wanted this part to be like a stylised documentary, to be more real, more textured,” says Delhomme. 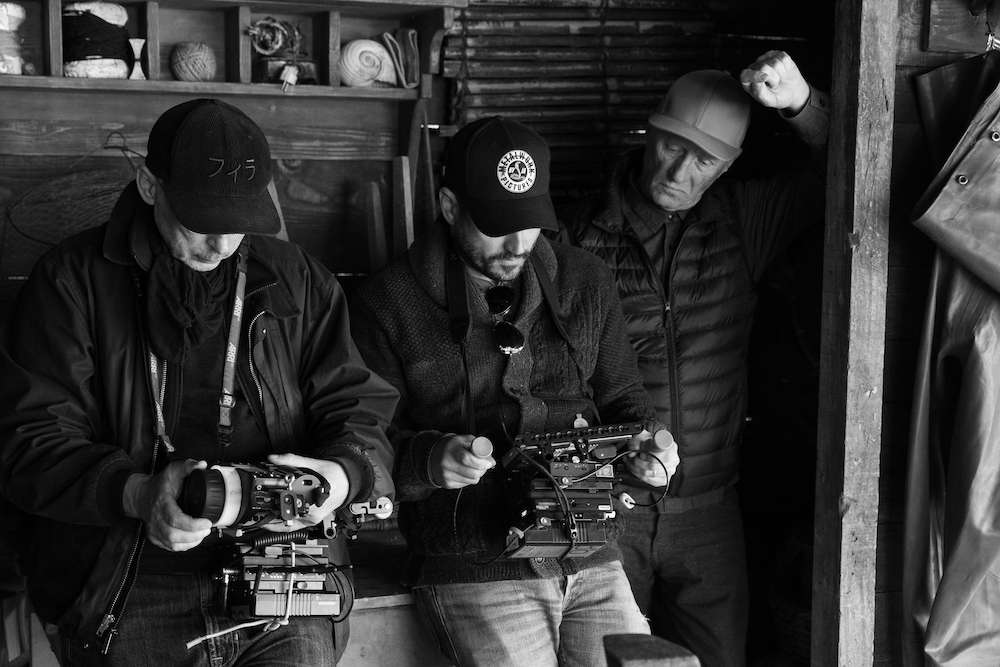 In the beginning, Smith feels alien to the culture he is thrown into, but with time he starts to regain his artistic prowess.

“Later on, when he is about to take photos of one of the suffering victims of the mercury disease, we slowly fade to B&W to show how he translates the scene happening in front of him into an iconic image. An extremely sensitive artist who lives in a world of colours but can only think and breathe in B&W.”

There are many powerful moments in Minamata, including a few sequences of desperate protests by activists in front of the Chisso factory responsible for the poisoning. 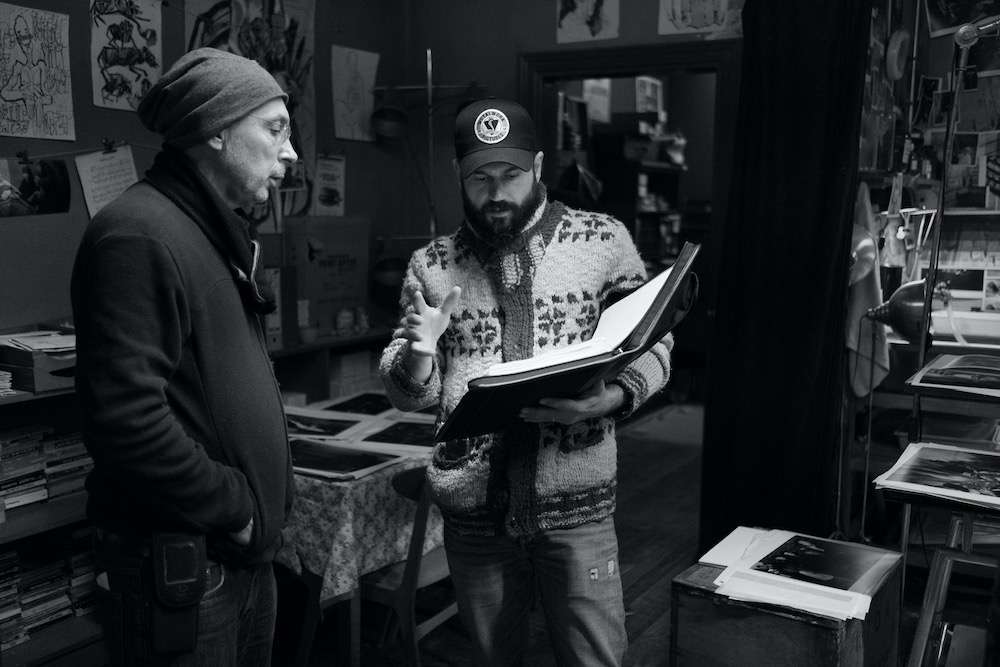 “It was so much like filming a documentary. A crowd of actors and extras behaving as if things were real, I was following Johnny Depp capturing photos in full Eugene Smith mode,” remembers Delhomme. “We shot like that for hours, some takes lasted up to fifteen minutes of furious improvisation. It was so easy to forget it was a film, we were all motivated to tell this story for the millions of victims of industrial pollution throughout the world.”

All those challenges paled in comparison to the fact that the film, shot from January to March 2019, had to be made in Serbia and Montenegro.

“We shot the New York loft scenes and Japanese interiors in a warehouse in Belgrade’s harbour. For the exteriors we used a village on an island in Montenegro. We were spending our shooting days in a mental Japan and went home in Belgrade every night, can you imagine?” 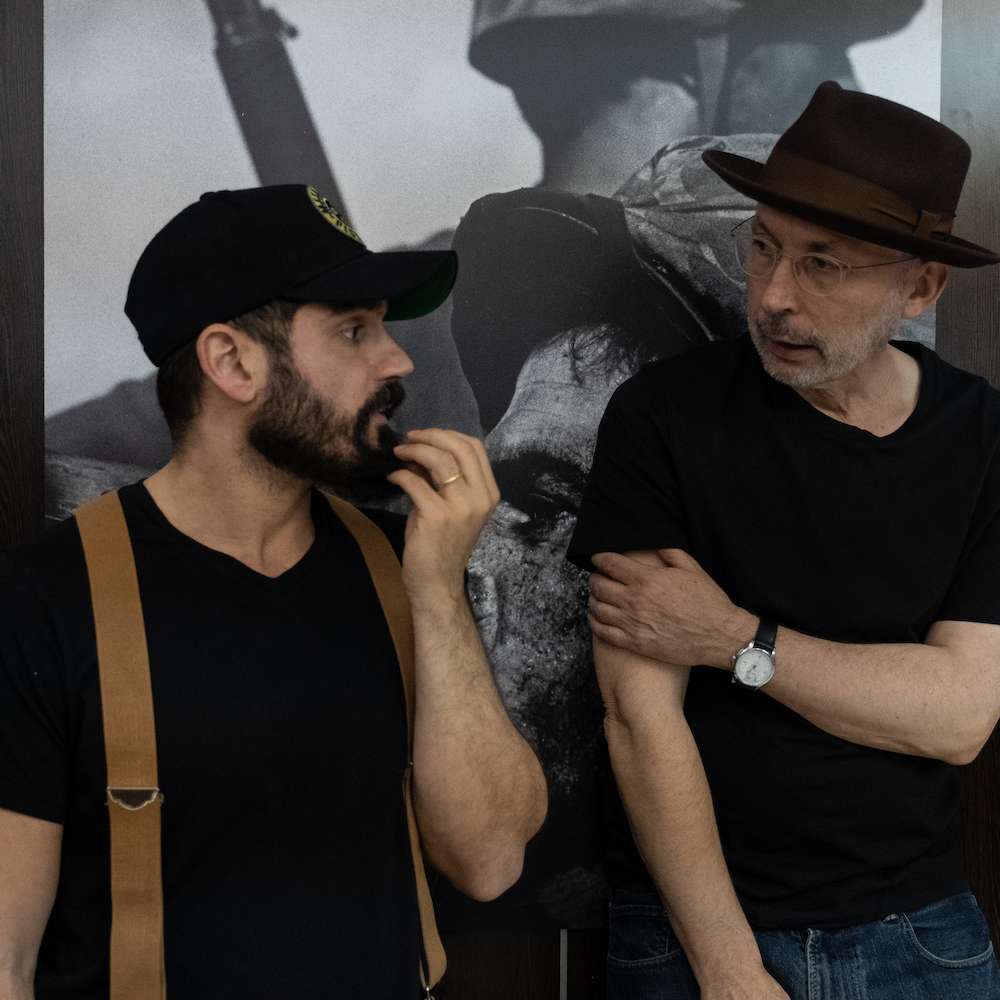 Still, Delhomme is proud of how the film turned out.

“We never felt it was a weakness not to be in Japan. We embraced the limitations, made them our advantage. From the moment I shot the Vietnam-set The Scent Of Green Papaya (1993, dir. Tran Anh Hung) on a soundstage in Paris, I honestly think it can be more powerful to recreate the filmic idea you have of a country. Of course, I can’t stop myself imagining how the film would have been if we really had shot in Minamata itself. Maybe it would have been too emotional to be there.”