As soon as Rachel Clark arrived for her interview as a candidate DP for Pirates (2021) – Reggie Yates’ feature directorial debut following three friends as they traverse London in search of the ultimate Millennium party – she knew that this would be no routine conversation.

“It’s quite terrifying being interviewed by someone who has interviewed people for a living,” Clark says of the British TV presenter, radio DJ and actor, during our late-night Zoom interview from the production offices of Without Sin, a four-part drama she is shooting for Left Bank Pictures. “Reggie is a pro. I felt like he eked a lot of personal information out of me in a very short space of time.” 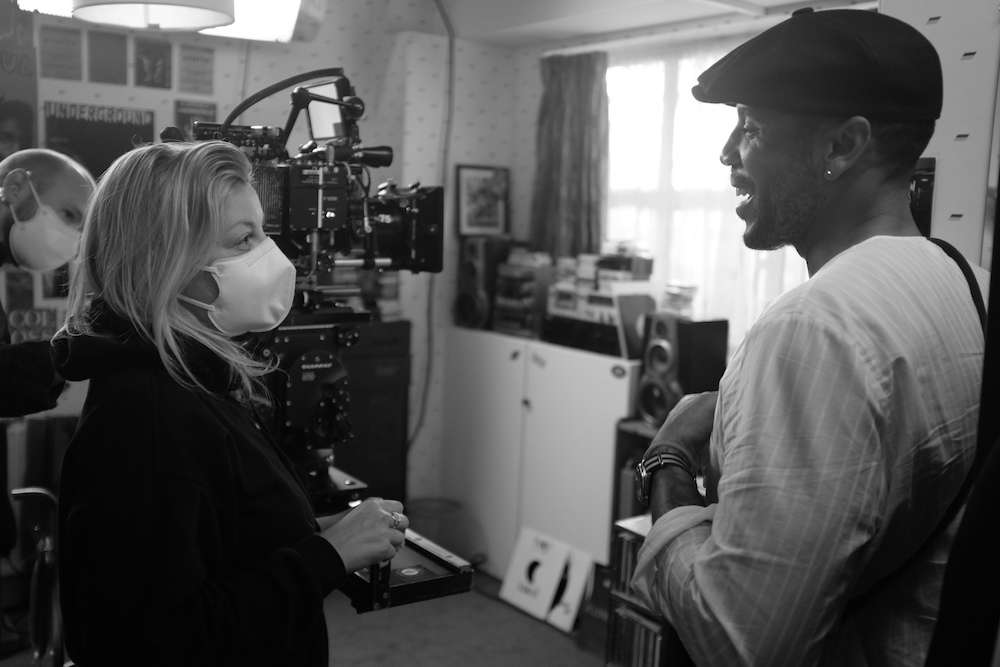 Pirates is Clark’s first ‘official’ feature as a newly-fledged DP, and she has reached this level the traditional way over 15 busy working years, moving-up through the ranks. Highlights of her career to date include working as 1st AC on Andrea Arnold’s road movie American Honey (2016, DP Robbie Ryan BSC ISC), “an incredible experience,” she says, and her graduation to operator/DP was marked by Rocks (2019, DP Hélène Louvart AFC), where she acted as B-camera operator and 2nd unit DP.

“Rocks was almost like a DP internship,” recalls Clark gratefully. “I was involved in a DP capacity, but there was also another DP there, Hélène, who was guiding me and including me in every part of the process. I never went back to assisting after that.”

From their first meeting onwards, Yates and Clark found common ground as two contemporaries passionate about independent films, and some of these informed the making of Pirates. 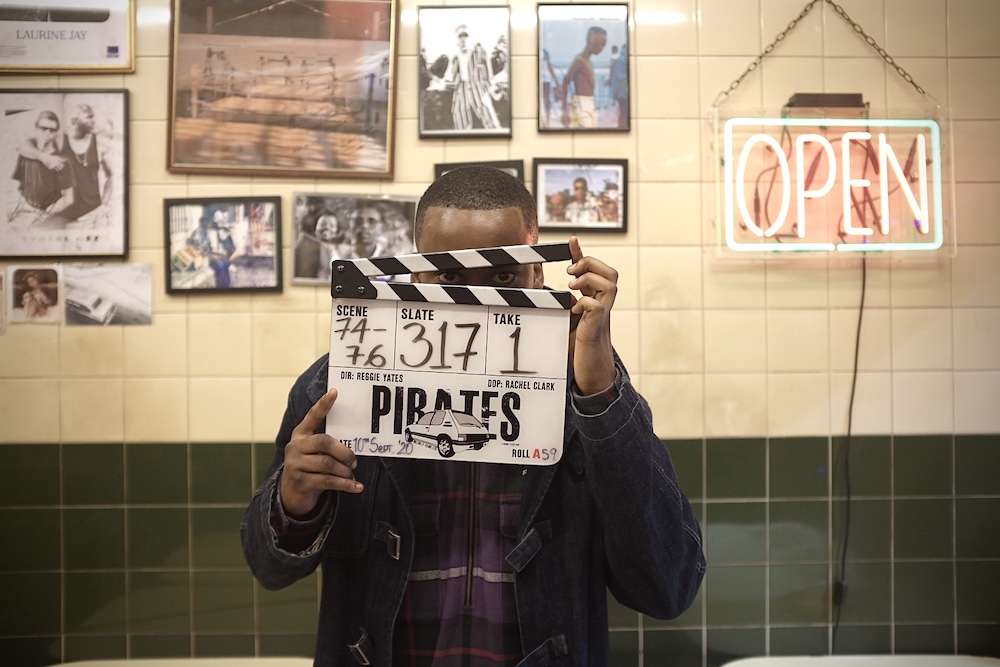 “Reggie talked a lot about the lighting, use of colour and skin tones in Belly (1998, DP Malik Hassan Sayeed),” divulges Clark. Sayeed, also known for lighting Spike Lee’s He Got Game (1998), was once referred to by DP Bradford Young ASC as the “gifted god of lighting black folk.”

“Our three actors had very different skin tones,” continues Clark, “Reggie was passionate about making sure we represented them truthfully. This was something we discussed extensively, looking not only at films that had done it well, but also those which had done it badly.”

More than just discussion points, Yates went on to pay homage in Pirates to those independent films that had particularly inspired him.

“There are a few shots in the film which are an ode to La Haine (1995, DP Pierre Aïm AFC),” says Clark, “composed conversations where the characters sit in a line and don’t necessarily look each other in the eye. There’s a shot in La Haine where they’re sitting in the playground by this big hippo slide. We had our characters sitting on bollards in front of a giant snail. 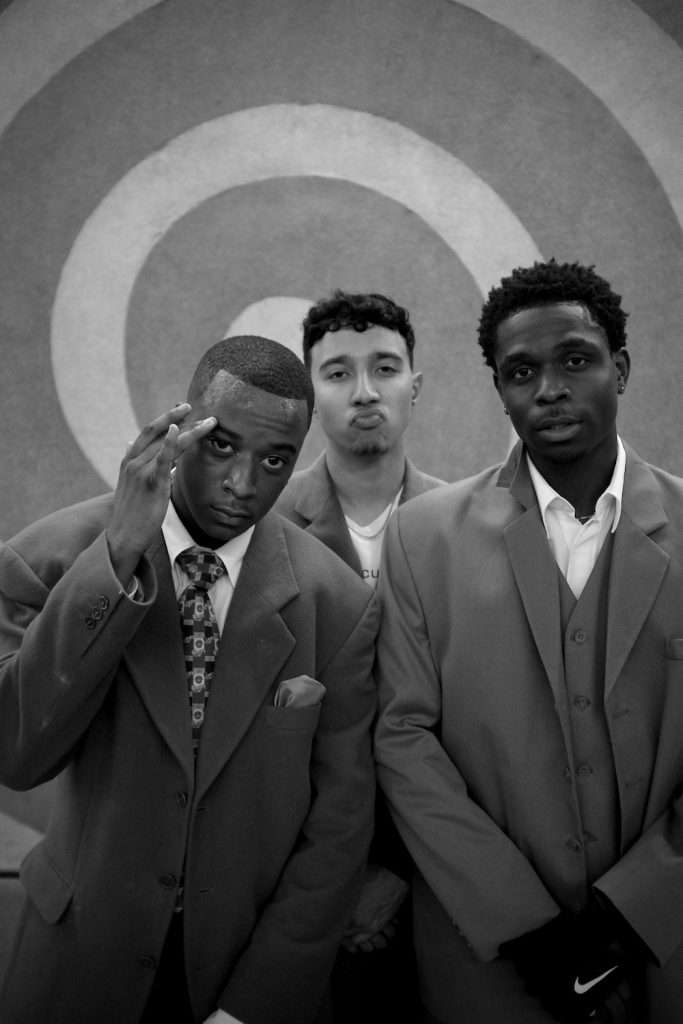 “There’s a scene outside a nightclub that Reggie always calls the ‘Belly scene’,” continues Clark. “Shooting a nightclub set on the eve of the Millennium afforded us an opportunity to introduce some strong colours. We were directly inspired by the garage music scene of the ‘90s – clothing and fashion at the time were very bold and striking. We looked at a lot of images and videos captured at garage nights. Purples and pinks were a direct reference to those real images, and they look amazing on black skin. Throughout the rest of the film you’ll find burnt oranges, blues and greens.”

Yates, however, was concerned that Pirates, though late-90s period and urban, shouldn’t be grimy and gritty. “We’ve seen it so many times before and we didn’t feel the need to repeat it,” stresses Clark. “Reggie wanted to celebrate London and black culture. We talked about the film being a bit of a love letter to London, garage music, the boys and friendship. 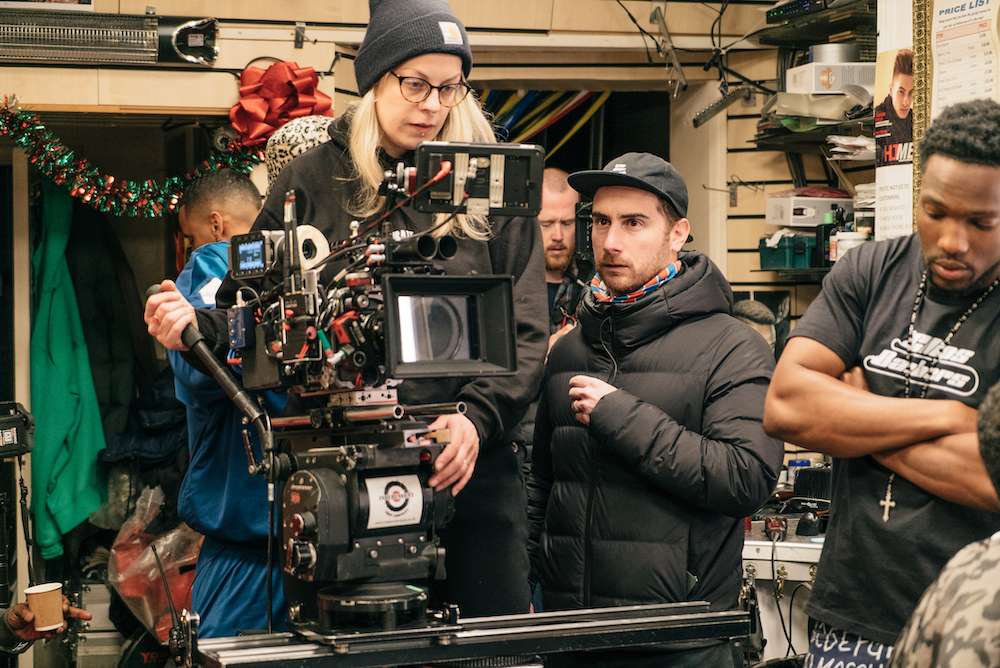 “We were lucky to be able to work with the incredible colourist Jateen Patel at Molinare,” Clark acknowledges. “Jat had graded all of Reggie’s previous shorts and I was very grateful to Reggie for introducing us, he did an amazing job on the film. I graded remotely for the most part while working nights on location shooting B-camera/splinter unit for Rob Hardy BSC ASC and Alex Garland on their new film Men (2022).”

The ubiquitous presence of a bright-yellow vintage Peugeot 205, known as the ‘Custard Cream’ and affectionately considered to be the fourth character in the film, helped inform the choice of camera.

“The car was tiny,” emphasises Clark, “and then you got these three boys in it, plus me. We shot on an ARRI Alexa Mini for the fact that it is small and flexible.”

For lenses, Clark chose the Primos from Panavision. 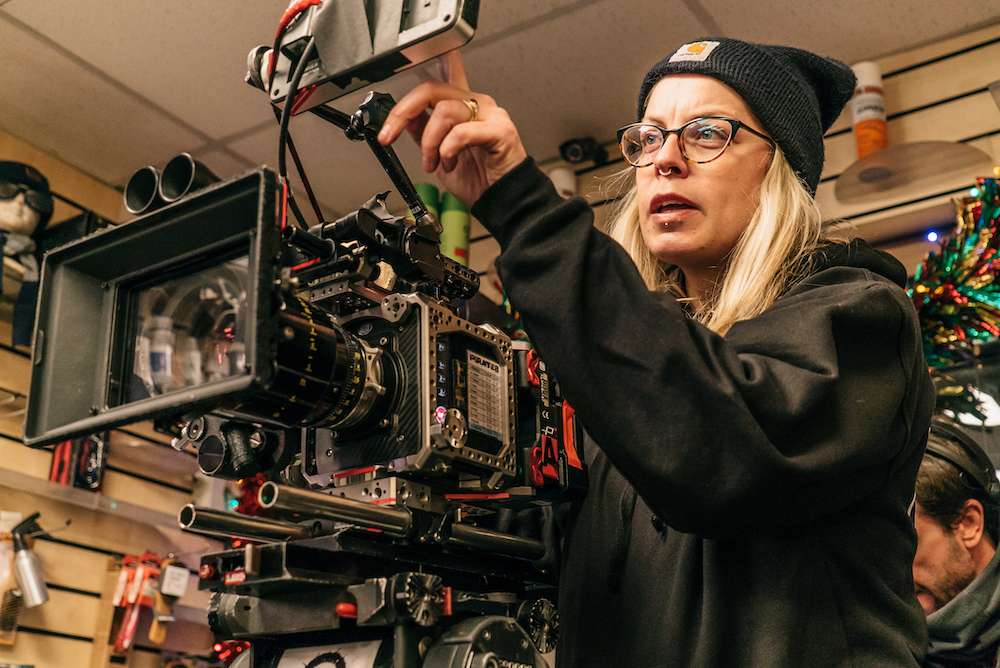 “I’ve always loved the Primos, and the fact that Panavision were able to supply me with a great selection of close-focus Primos for our car work was a no brainer. It helped so much having the flexibility to move around, to get close without the need to rely on diopters. The Primo lenses have a slightly nostalgic feel, but they’re still really sharp. We did loads of tests and they were the ones that felt right. We used the lightest of pearlescent filters as well to add a softness around the highlights.”

A goodly proportion of the action of Pirates takes place in the streets of London after dark, which in 1999 were still dominated by colour-deadening sodium-vapour lamps, largely now updated to LED lighting.

“We didn’t have the kind of budget that allows you to shut down stretches of London streets for long periods of time, or relight those streets,” says Clark. “We had to be smart with our location choices and camera angles instead. We largely stuck to smaller streets that hadn’t been modernised. 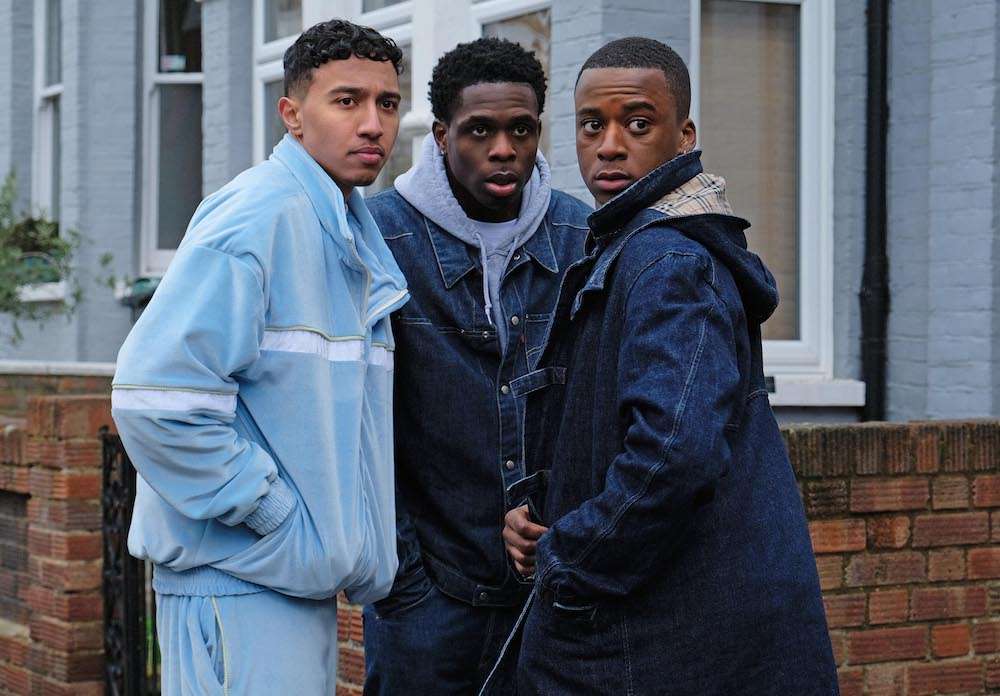 “There’s a scene we shot in Vauxhall under an old brickwork railway bridge. It had these extremely bright modern LED lights all the away along. We decided to gel them all to an amber yellow and added a blue backlight, which kicked beautifully off the wet-down. It was pretty simple but effective. I wouldn’t say it was totally ‘real’, but it looked great and felt like part of our show.”

A requirement of the lighting in general for Pirates was that it had to be quick and simple.

“We had a lot of night to shoot and a lot of location moves,” exclaims Clark, “so we needed to be fast and efficient. We used a lot of LED lighting, like the Astera Titan and Helios tubes. They are battery powered, light, waterproof and give you full colour control.”

Everywhere they went, the music of the late-‘90s garage scene followed.

“The characters in the movie are pirate radio DJs,” reveals Clark, “hence Pirates. The tracks were in the script. Reggie had a Spotify playlist which we listened to throughout prep and we always had music playing on-set while setting-up or in-between takes.” 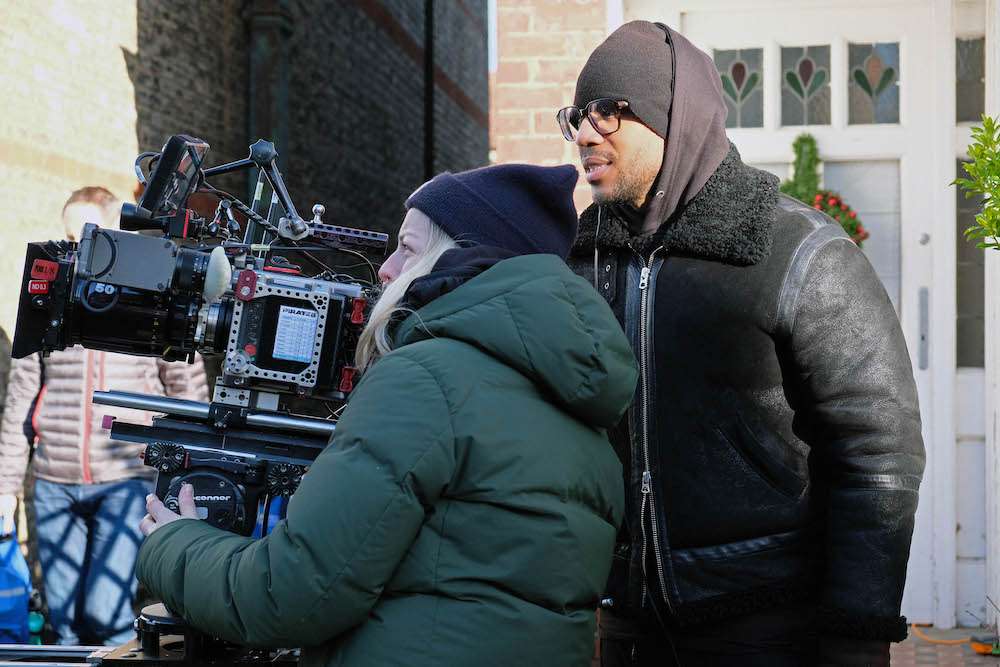 This fixation was more than just a crew-motivating tactic.

“Reggie was obsessed with beats per minute and pace and timing,” details Clark, “he spent a lot of time in the edit constructing everything to have a certain rhythm. We discovered that shots which were cleaner and simpler allowed him to cut to the beat in a way that would help the timing of the jokes. It informed our subsequent choice of shots.”

If the discerning reader has picked up on the above anomaly in the order of editing and shooting, it is because the Covid pandemic cut the production schedule in half. Although there were some low moments, where Clark wondered if her maiden project would survive to see completion, and social distancing measures made recreating heaving Millennium party club scenes seem like a Sisyphean task, Clark’s overall opinion is that the hiatus was a positive thing. 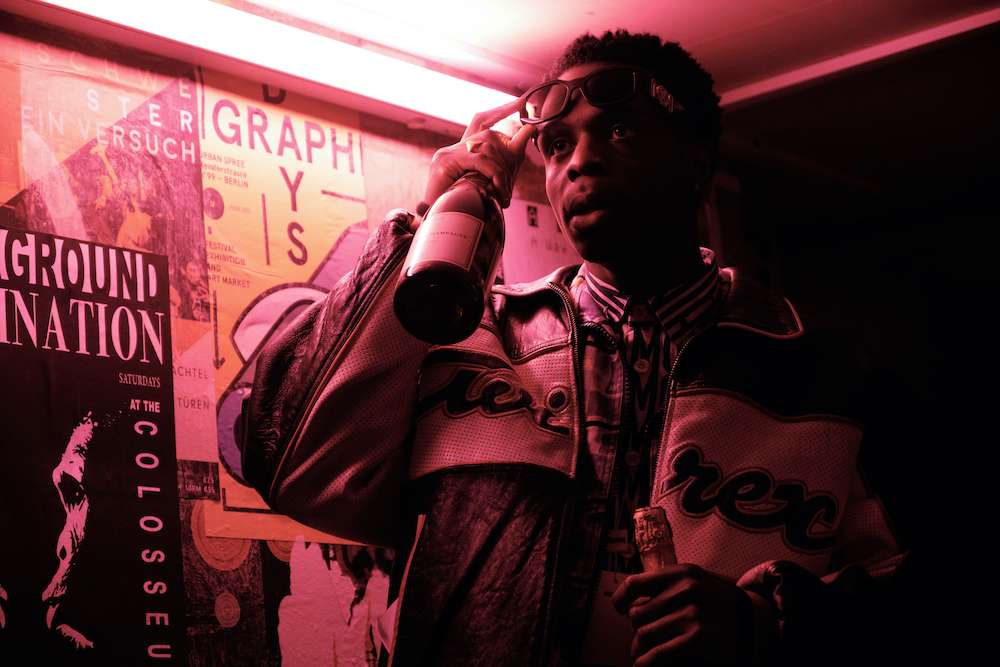 “It gave us a chance to take stock,” Clark remembers, “and really look at what was working, what wasn’t and where we could be a bit braver. We didn’t want to reinvent the movie, but the things that worked, we could then push them a bit more. In fact, everyone came back from lockdown with a real fire to improve and push ourselves as much as we could.”

Clark is philosophical on this point.

“I feel like everyone should get that chance,” she says. “Imagine you were doing your first feature, and then someone says, “right, you can have a three-week break in the middle to edit some stuff, get some rest and recalibrate. What a gift. Pirates definitely benefitted from it.”