DP Maz Makhani gets ‘up-close and personal’ on The Guilty

Director Antoine Fuqua’s new film for Netflix, The Guilty, starring Jake Gyllenhaal, is a particularly unusual character study. For one thing, the entire movie takes place in real-time over a single morning inside a single location – a 911-dispatch call centre (an elaborate set on a stage in Manhattan Beach). For another, Gyllenhaal’s character, Joe Bayler, is the only primary character viewers see on camera – those he communicates with are heard over his telecommunications system, but not seen. Additionally, the movie was shot in just 11 days at the height of the Covid-19 pandemic, with Fuqua, as director, isolated across the street from the set in a filmmaking van, due to a need to quarantine as a result of contact tracing issues. 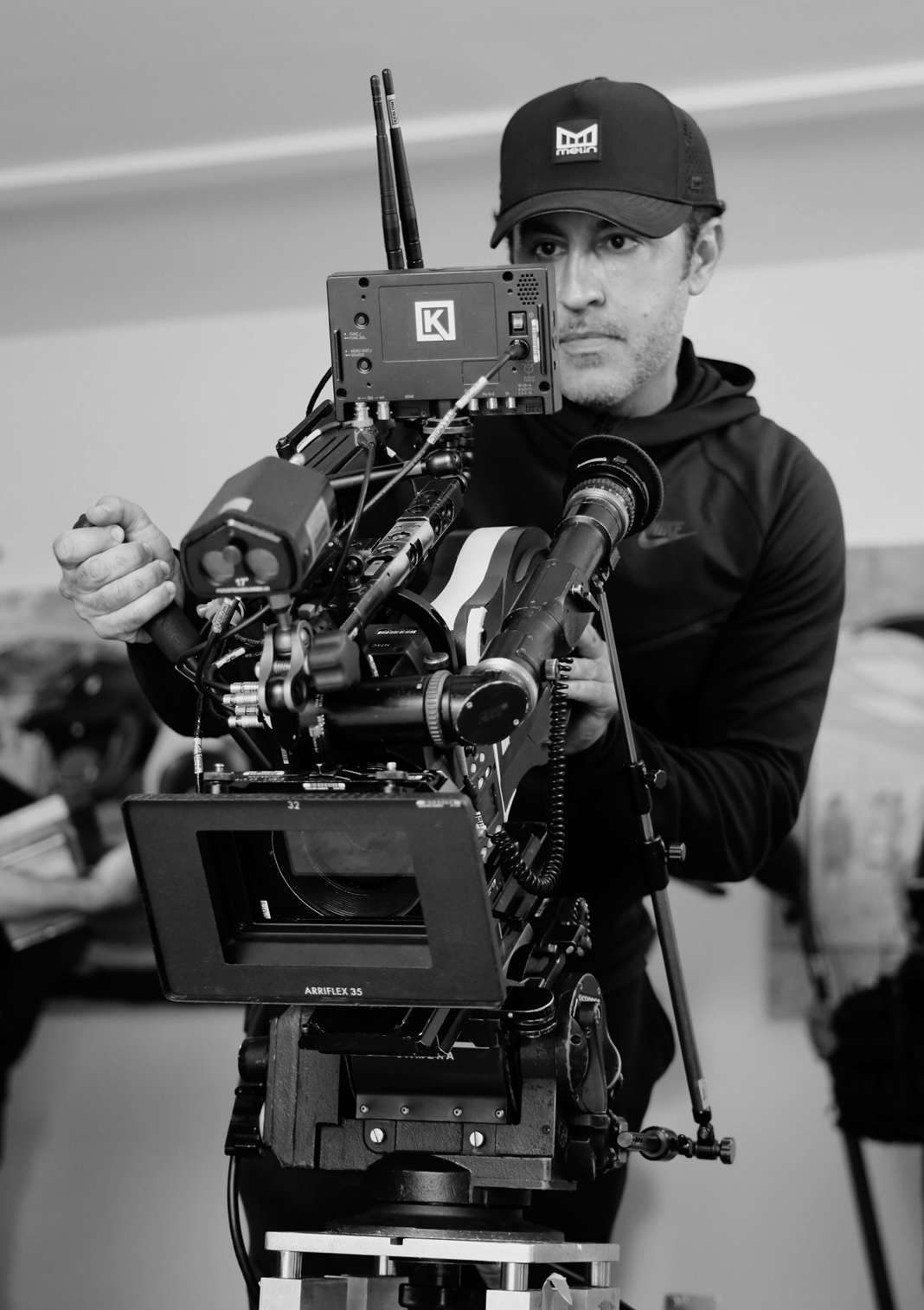 The single-location/single-character approach was influenced by the Danish film of which this movie is a remake – a 2018 movie called Den Skyldige (dir. Gustav Möller, DP Jasper Spanning). But the visual approach by Fuqua’s team, plus the addition of key narrative elements, such as a police brutality sub-plot, were entirely new.

In the film, Bayler is a demoted cop, trapped behind a desk at the call centre the night before he is supposed to attend a hearing about a shooting he was involved in. When a strange call comes in from a woman claiming to be held hostage in a van somewhere along the freeways of Los Angeles, on a night when the city is burning due to riots set off by the police shooting incident, Bayler struggles to save her, even though it may cost him his sanity to do so. Outside of a few colleagues, seen peripherally in the call centre, plus some stylised shots of burning Los Angeles and a van that may or may not contain the desperate caller, the movie focuses entirely on Bayler and what’s going on in his mind.

Fuqua chose veteran cinematographer Maz Makhani, whom Fuqua has known and worked with over the course of ten years, to lens the piece. Makhani’s credits include Fuqua’s What’s My Name: Muhammad Ali (2019) and The Day Sports Stood Still (2021).

“The original film was quite good, and it was definitely a challenge to keep up with that in terms of the emotional state of the character,” Makhani explains. “Antoine and I talked about how we wanted to make it visually our own thing, different from the original. The thing I love about my relationship with Antoine is that he trusts me completely. He didn’t ask what lenses I wanted to use, what my lighting approach would be. He just trusted me to visually give him the movie he wanted. 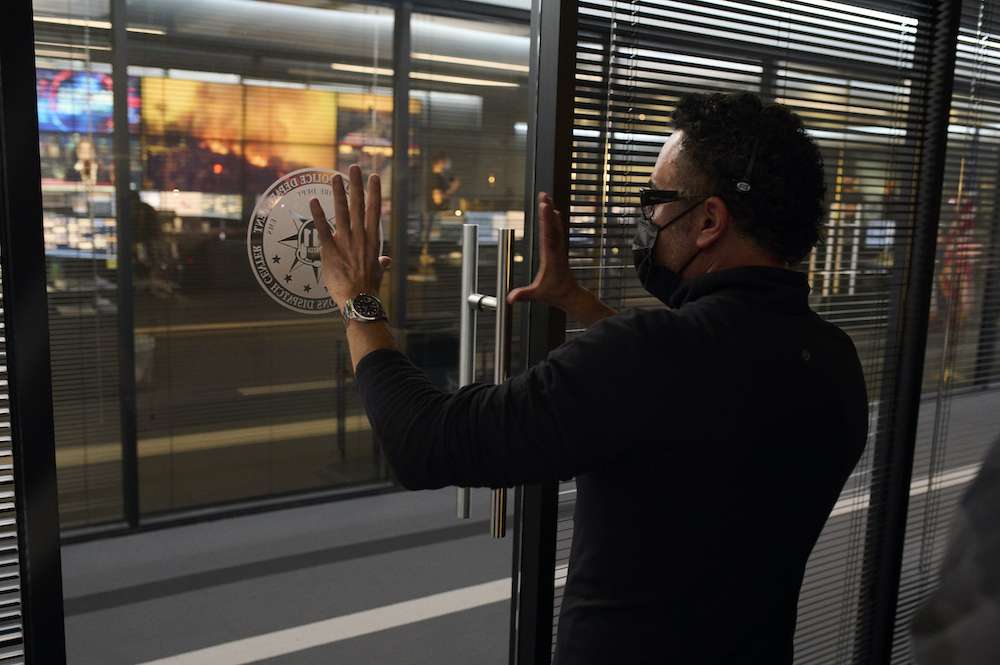 “The one thing the two of us did decide together at the beginning was a big technical thing – that the aspect ratio would be 2.35:1 Anamorphic. The original film was shot spherical, and we thought this would help change the look right off the bat. Since Netflix demands 4K or above in terms of resolution, we had to shoot with a 4K camera, and luckily the Alexa LF was available.”

Following are highlights from a conversation Cinematography World had recently with Makhani to get his explanation of how The Guilty was shot.

Please elaborate on the camera and also your lensing choices to achieve the look Antoine was seeking.

We shot with the Alexa LF, which is a north-of-4K camera. Then, I connected with Hawk Lenses, and they gave me a beautiful set of Hawk 65 1.35 squeeze Anamorphics. They were absolutely incredible to shoot the film on. Only a few sets were available, so we were lucky to get them.

THE GUILTY: BEHIND THE SCENES with ANTOINE FUQUA (DIRECTOR). CR: GLEN WILSON/NETFLIX © 2021.

Was there any discussion about shooting on celluloid film, since a high-resolution image was required?

Actually, yes. One thing Antoine asked me early on was how would I feel about shooting this on film? Of course, being a film cinematographer for 15 years, I was super-ecstatic about that idea. But then, a day or two later, it just didn’t seem to resonate with me the same way. The reason for that is the short timeframe we had to make the film. When you shoot with film, you have to reload every ten minutes or so – you only get ten minutes at a time.

So, when Antoine reached back to me, I was kind of unresponsive about film. He said, “You want to shoot digital, don’t you?” I said “Yes”. I felt digital was a better choice because we could roll more at any given time – 20 to 30 minutes without having to cut camera. That ended-up being extremely beneficial to Jake’s performance, as the camera is on him the entire time. And the other reason was that this film is very ambient-driven in terms of how I lit it. I didn’t want it to feel ‘sourcy’ – I wanted it to feel more natural. Digital cameras like the Alexa LF have more latitude. You see through the darkness differently, and you don’t have to light every single shot. You can sort of go with ambiance. 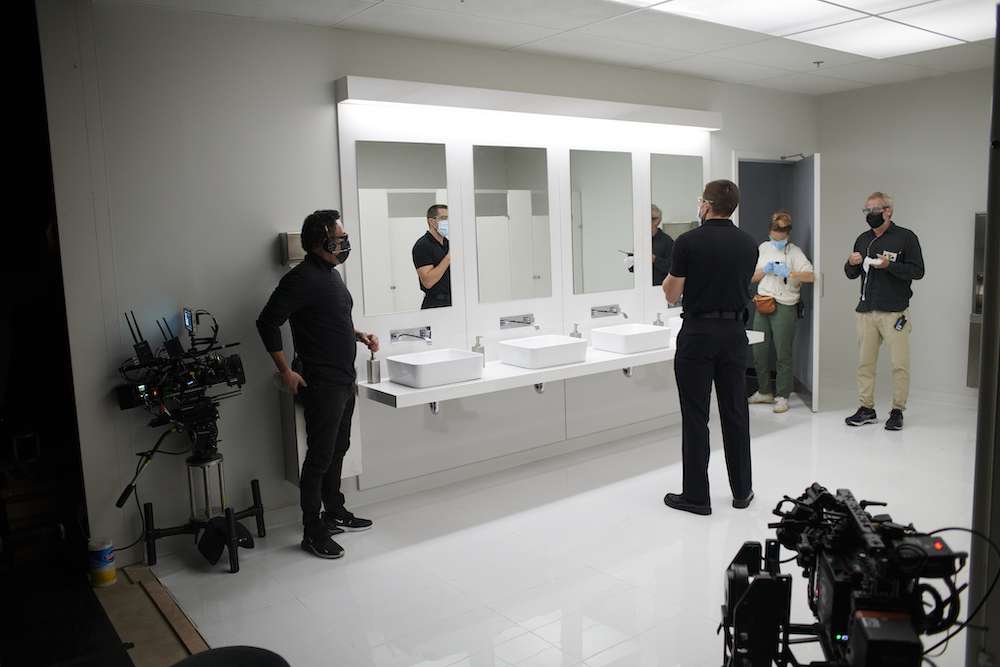 THE GUILTY: BEHIND THE SCENES with JAKE GYLLENHAAL as JOE BAYLER. CR: GLEN WILSON/NETFLIX © 2021.

And then, the third thing was that digital just feels to me a bit more urgent, live and real. When you shoot on film, it tends to feel nostalgic, and you lose a bit of a sense of when it could have been made.

On this kind of project, when our attention is solely on a single character the entire time, what decisions did you make about camera movement and choreography?

Given that we had such a short time frame for principal photography, I felt we had to incorporate as many cameras as possible. We ended-up shooting the movie with three cameras constantly rolling, which really helped us stay with Jake and finish speedily. 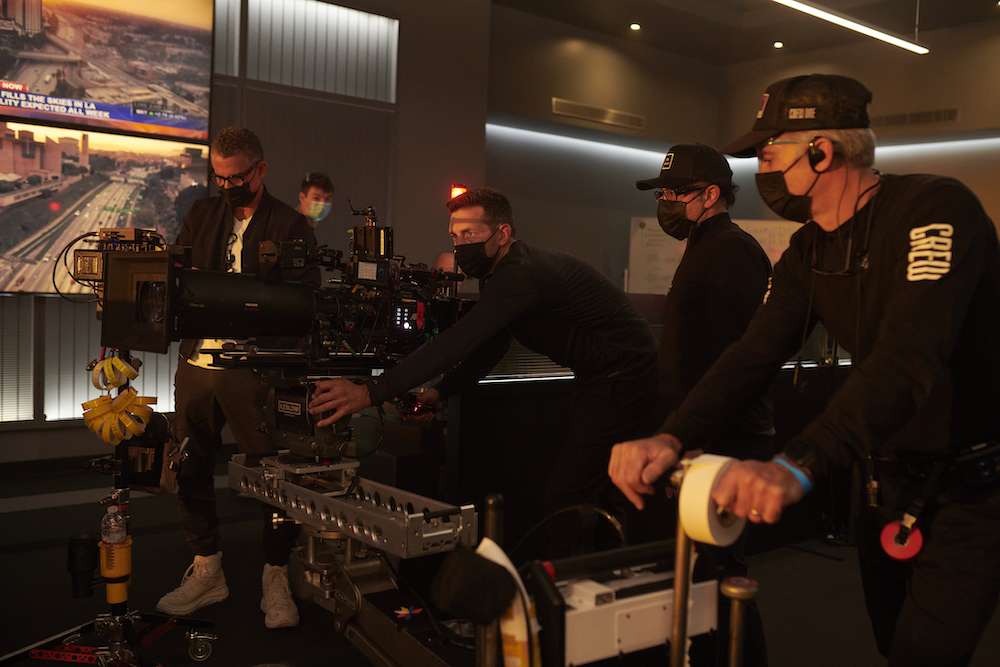 We had all the usual tools, like remote heads and Steadicam, incorporated. The reason is, it’s deceptive in terms of what you need to capture a character who, most of the time, is sitting at a desk. In order to get the camera real close to him, the camera body had to be on a crane arm to actually move or push over the entire desk. So, we had a crane on a dolly and we used Steadicam a lot when he moved around to the water cooler, into the hallway, and so on. During the sequence that I call ‘The Confession,’ in which his character talks about the things he was accused of, there was also a good amount of handheld. And for the rest, we used sliders so we could do some intricate lateral moves and push-ins or pull-outs.

We also had a cool rig that my key grip, Charlie Lenz, built for the bathroom scenes. The movie begins and ends in the bathroom, and during the scene where Jake’s character is at the sink, and it appears like he is about to lose his marbles, we track him directly straight down overhead from the sink all the way over to one of the toilet stalls in the bathroom.

And what were your lensing decisions based on?

I wanted the film to feel visceral. If you think about the small, confined place we were shooting in, and the fact that we are mostly on Jake, the concept of anything visceral doesn’t really sound like it fits. But the one way I felt I could achieve that was through very close focus lenses.

I had a zoom lens that was a 600mm on the far end. That particular lens was also a Hawk, but spherical. So that is the one place I did mix some spherical with the Anamorphic primes. They cut really well together – the glass looked exactly the same to me. With that lens, I could shoot from across the room and still get a close-up on him. I wanted to do that but step back with it, so that I could put stuff in the foreground and give a sense of depth, so that we are seeing him from a further perspective, and then just sort of stack things around his face to make it feel claustrophobic.

I also had a 100mm macro lens that I used a lot on extreme close-ups on his eyes and the base of the telecom system he was using. And, of course, when you are that close, you see the sweat beading, you see every emotion, and you feel it.

So, that was the idea, to get viewers into an emotional visual state. If you are really close to someone and they are dealing with something emotional, if you do a good job and frame the right things, I think you can create a lot more tension.

And what was your lighting philosophy on the show?

Everything was RGB LED’s, along with some hybrids. The only practical Tungsten light I used were a couple of 20Ks that were outside the window, to be able to throw light into the entire communications centre. I warmed those up as though the sun was low and warm, like it was about 6pm.

But after the sun drops, everything became LED. It was all controllable and dimmable that way. We could change colour temperatures, and that really allowed for quick lighting changes. And then, once day turns into night, we are sort of in that world, and we don’t have to worry about chasing time of day. It pretty much stays night until dawn in the morning, and there, we had one big wide shot of Jake in the hallway, but that was just one shot.

THE GUILTY: BEHIND THE SCENES with ANTOINE FUQUA (DIRECTOR). CR: GLEN WILSON/NETFLIX © 2021.

The way I lit his desk was also very important. The character had a simple desk lamp. The ambiance above him did a little bit of the work, but really, the desk lamp in the main room was how I lit him most of the time. First, we had sunlight coming in, and then it becomes evening and the desk lamp does its thing. For the night interior, I cooled the space off. The desk lamp and the ambiance had different juxtaposing colour temperatures – cooler in the ambient space, and the desk lamp would be a little bit warmer.

Then, when Jake goes into a smaller, even darker room, the lamp goes away. But there, his desk has a red light that comes on every time he gets a call. That was in the original film, and we stayed true to it. So that red light becomes more prominent as lighting when the room gets darker. Near the end of the film, that red light became the most prominent light on him as deals with emotional stress.

And then, we go back into the bathroom, which is a big, bright, white space. There, the character sees himself in the mirror in the brightness. The bathroom is white, very bright, and this really emphasises the vulnerability of Jake’s character.

“Antoine trusted me to visually give him the movie he wanted”

“If you do a good job and frame the right things, you can create a lot more tension”

The LED lighting was all controllable and dimmable, which really allowed for quick lighting changes”