Using Kodak 35mm film, DP Mátyás Erdély HSC infused tension and unease into every frame of the slow-burn family psychodrama The Nest. Written, directed and produced by Sean Durkin, the haunting thriller stars Jude Law and Carrie Coon as Rory and Allison O’Hara, a painfully mismatched married couple whose family teeters on the brink of meltdown. 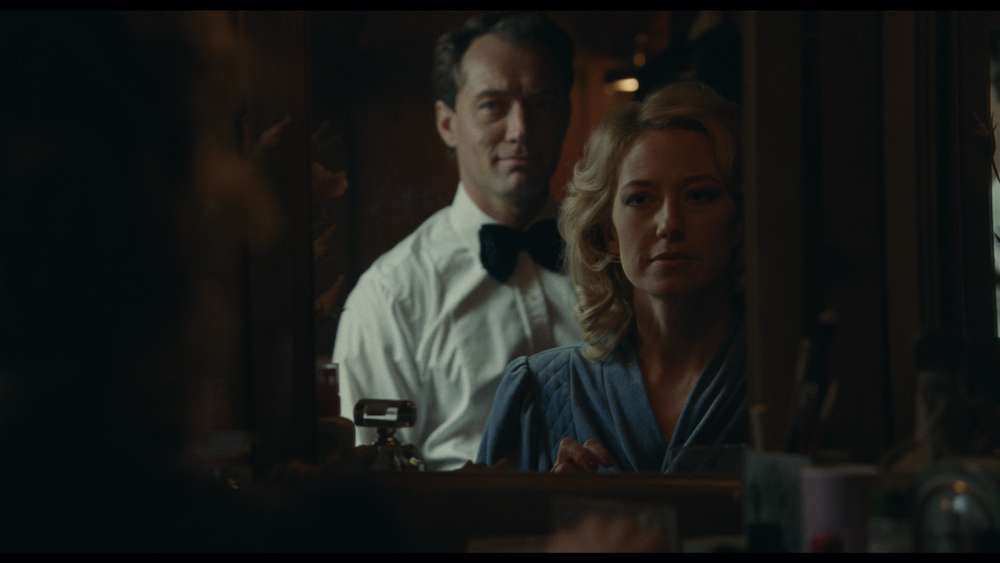 Set in 1986, the story follows Rory, a cocky, self-made commodities broker, who lives in suburban New York with his American wife, step-daughter and son. One day, Rory announces his intention to relocate the family to England, where he was born and where he is aiming to leverage new business opportunities. His wife, however, is somewhat unsure, as the family has been uprooted several times before, always based on Rory’s certainty of fresh financial opportunities. All too soon, she and the family find themselves housed in a grand but foreboding Surrey mansion, replete with secret doorways, dark chambers and stairs that creak. However, Rory’s relentless ambition blinds him to what his family really needs, and cracks begin to appear amongst them. 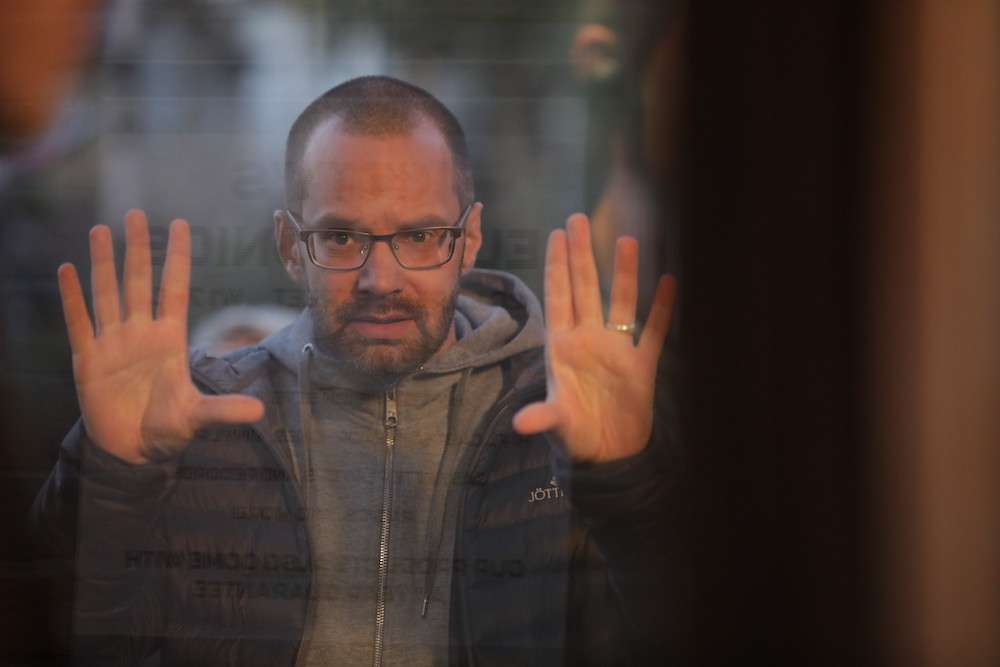 Production on The Nest took place over 35 non-consecutive shooting days during the summer months of 2018, starting with a week at locations in Toronto, Canada, doubling for Upstate New York, before filming switched to the UK for six weeks. Nether Winchendon House, an historic, Grade 1-listed medieval and Tudor country manor, near Aylesbury, Buckinghamshire, was used as the prime location for the action to unfold.

A key collaborator for Durkin in bringing the story of the family’s slow demise to the big screen was Hungarian cinematographer Mátyás Erdély HSC – the pair had previously worked together on Southcliffe, the BAFTA-winning British TV drama series about a town and its residents surviving a series of tragic shootings.

“Sean is a joy to work with and makes production a great experience for the cast and the crew,” says Erdély. “He and I worked well together on Southcliffe, and I really liked his filmmaking philosophy of keeping things natural, and as minimal as possible, but whilst always maintaining a high-level of taut, emotional impact. It’s a beautiful way to make a movie, and we were super-in-sync. We took this same ethic and working practice into The Nest.” 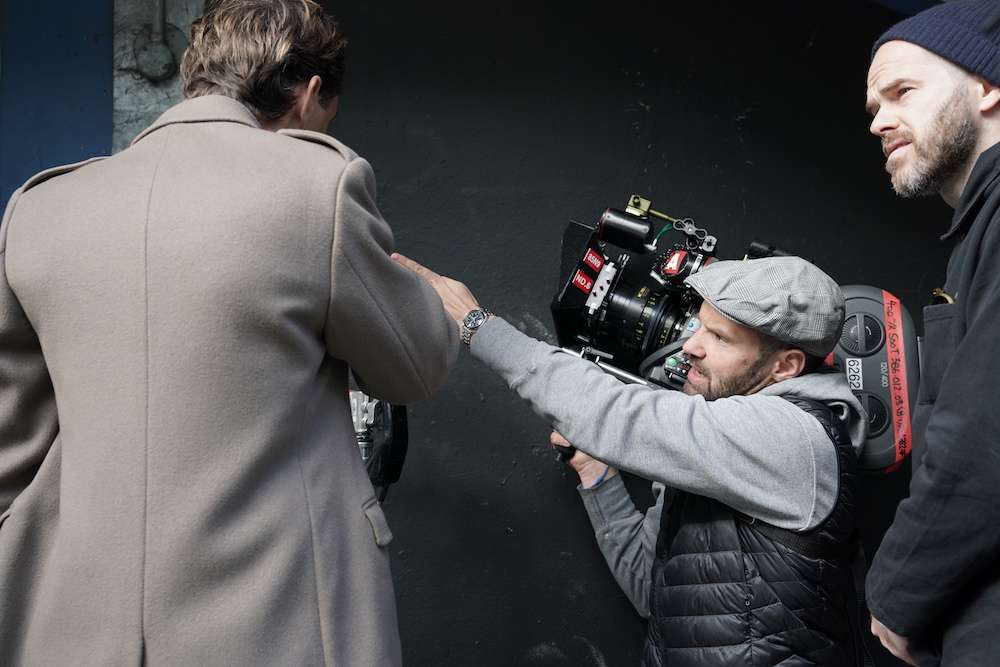 Erdély is known for his outstanding cinematography work on Laszlo Nemes’ multi-award-winning Holocaust drama Son Of Saul, and the acclaimed pre-WW1 drama Sunset. Both used close-up framing to relate their stories, both were shot on 35mm, and both completed post production with a pure, end-to-end, photochemical finish on 35mm, supported by Magyar Filmlabor, The Hungarian Filmlab, which used the final film prints as the yardsticks for the inevitable 4K DCP.

For The Nest, Erdély reveals that he and Durkin devised a framing protocol, using longer-lensed takes on exteriors and prolonged tracking shots through the eerie manor, that would create a chilling visual distance from the characters, simultaneously keeping them at arm’s length, but also seemingly together.

The camera, however, becomes much more up-close-and-personal as the family members themselves become alienated from one another. They are often pictured in near darkness, faces barely lit, and are seldom seen together in the same shot. 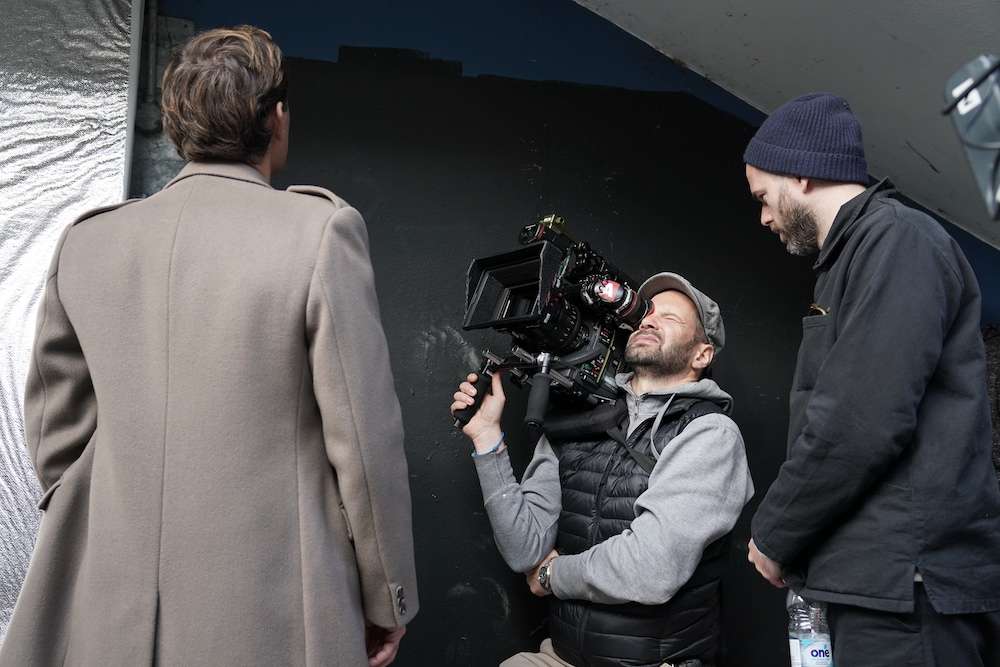 DP Mátyás Erdély HSC at the 35mm camera, pictured with director Sean Durkin, during production on The Nest. Image courtesy of FilmNation Entertainment

“Sean has a strong, instinctive visual sensibility. Every scene had its own vibe and tension, and he always had a great feel for how he wanted to block and shoot them. So I followed his lead,” says Erdély.

“Some shots were wide and static, some had zooms. Others we tracked along with the characters, shooting either handheld, Steadicam or on the dolly. If we could cover a scene in one shot we would do that. For example, when the family arrives at the manor, instead of having a series establishing shots, we moved along with Rory to reveal what the enormous house was all about. We shot that very early in the morning, and it looked suitably spooky and unsettling.”

Having tested a variety of lenses during pre-production, Erdély settled on Cooke S4 sphericals, plus an Angénieux 24-290mm T2.8 zoom lens, framing the production in 1.85:1 aspect ratio. 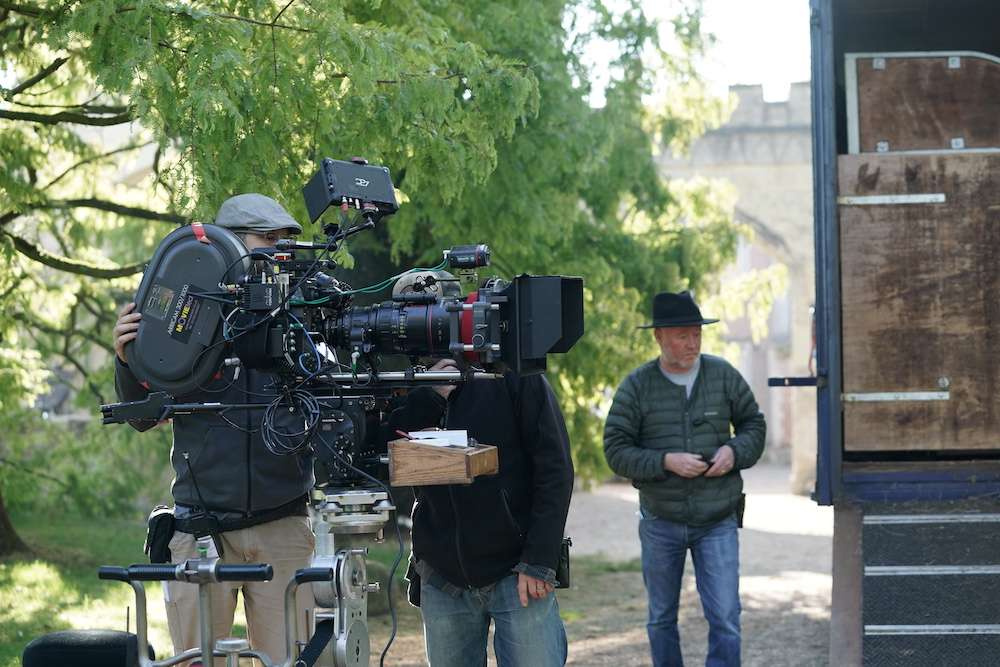 “During prep, the main conversation was how about much we wanted to indulge in the look of the ‘80s and the best way of carrying that,” he says. “I did some wardrobe tests with Jude on 35mm film, underexposing around 1.5 to 2 stops, using the Cooke S4s, which I used previously on Sunset.

“The images from our tests immediately looked good in how the lenses delivered clarity, roundness and shape that are pleasant to the eye, and the way in which the 35mm film rendered the costume, colours and sense of unease.

“Overall, the aesthetic looked authentic 1980s right off the negative. So we agreed early-on that we would not do anything technically to hammer-in a look – no filters, no look development, no vintage lenses. We would simply let the locations, wardrobe and under-exposed celluloid carry the era.” 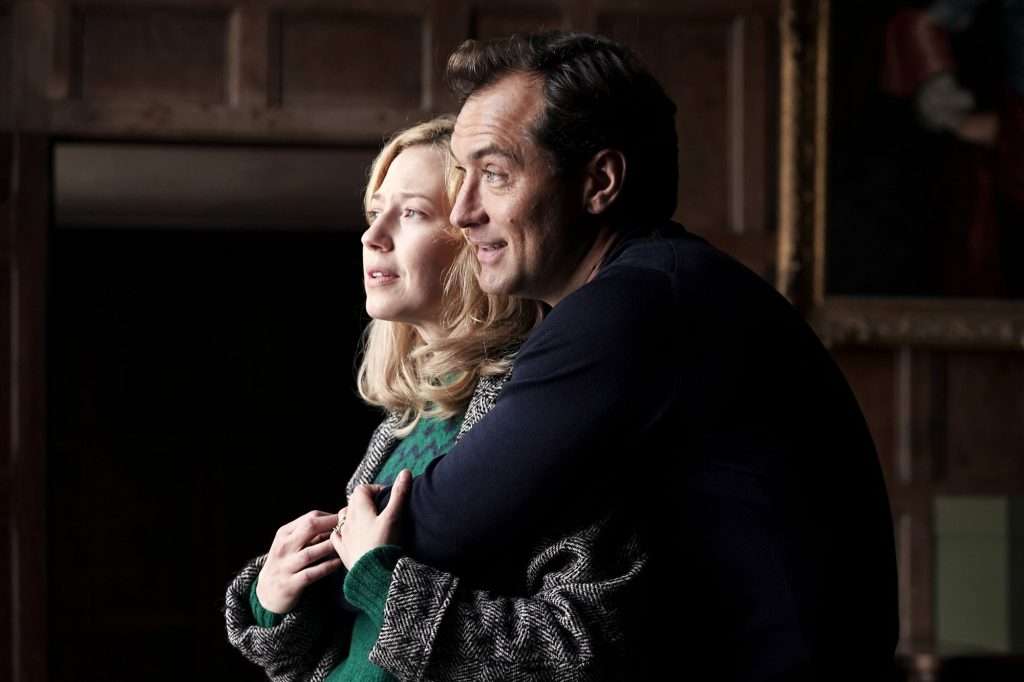 When it came to filmstocks, there was only one choice. As Erdély relates, “On Son Of Saul and Sunset I used just Kodak Vision 3 5219 500T, and did the same again on The Nest. Firstly, I like the visual consistency of colour, grain and contrast throughout a production when you use one stock.

“During production, the 500T is so versatile that you can use it in all manner of different interior/exterior, day/night situations. It is crazy how much information it records in the darkest shadows and brightest sunlit areas of the image.

“I also love the look of the 500T, especially on faces. I’m a cinematographer who likes stories about real people with real emotions, and film is such a humanistic format. We see a lot of Rory and his family in this film, and the 500T is the most visually-appealing to my eye when it comes to the faithful rendition of skin tones. It looks so real and organic that you recognise yourself in it.”

Whilst the movie was lit, Erdély says the illumination was all about keeping things simple and minimalistic, with an end-result of making the audience feel as if they were there with the characters.

“Essentially I created the mood with the fewest number of tools possible. I mainly deployed big units, 12K HMIs, to push bounced-light in from outside, and used practicals for night-time scenes,” he says. “We were bold and let the actors go dark. Often the lights were behind them and we could not see their faces clearly, but that was really the best way to let the atmosphere of a scene play out.” 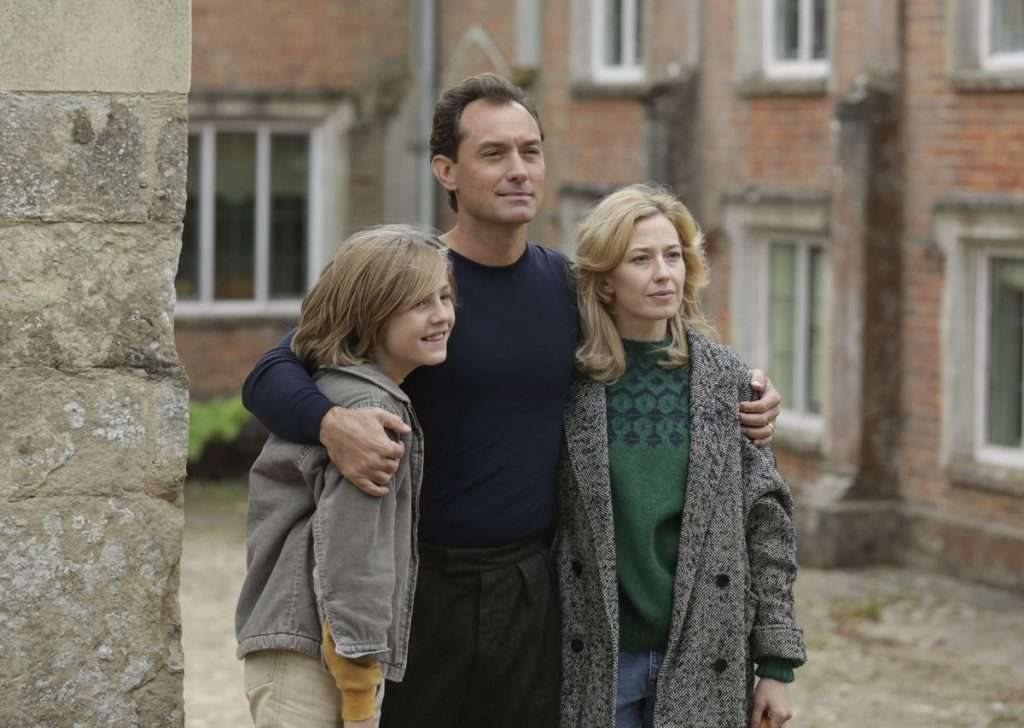 The film negative for The Nest was processed at Kodak Film Lab, located on the lot at Pinewood Studios, followed by a 4K-scan for editorial and the subsequent DI. Later on, Erdély worked with his collaborators at Hungarian Film Lab to make a 35mm print of The Nest from the 4K digital master.

“Shooting at Nether Winchendon Manor made it very convenient to get our film negative processed, and the workflow was amazing,” Erdély remarks. “The overnight turnaround of dailies was crazily fast and the quality of the viewing rushes was wonderful. Our on-set intentions were captured perfectly on film, which meant we didn’t need to do anything fancy during the final colour grade. The 35mm print we made afterwards looks absolutely fantastic!”

Erdély concludes: “I really love everything about film, and the more I shoot with it, the more I love it. I am addicted to film. The results never feel fake, plastic or artificial, just real and natural. Once again, Kodak celluloid and the nature of its look has transported the audience back in time, and given them an immersive connection to this great, unnerving psychological drama.”