London-based cinematographer, and NFTS graduate, Lily Grimes wrote in with details about her work on the artist film Horsepolish.

“I always say ‘yes’ to artist films, they’re full of brilliant surprises. These are people who don’t know how to think inside a box. They understand the need for experiment and play. And they hate multiple takes.

Horsepolish is an artist’s response to Vittorio De Sica’s 1946 Shoeshine (DP Anchise Brizzi), which follows two shoeshine boys who get into trouble with the police after trying to find the money to buy a horse.

Ours is a circular story about a young shoeshine whose efforts and aspirations form a never-ending loop of effort and aspiration in a tough world. This is the latest in a series of films made by the artist Oona Grimes, who also performs, and screenwriter Tony Grisoni, who directs. Although roles always blur.

The film was planned, as opposed to written, and, as this project took us further from the original than our previous films responding to Neorealist cinema, we had many more creative decisions to make.

Our location, The Ragged School Museum, is a fantastic building on the Regent’s Canal near Mile End in East London. Arguing in favour of shooting on Super16mm (and for once succeeding) we bought two rolls of Kodak Double X 7222 16mm B&W film stock from Frame 24, later processed from Cinelab, and rented a beautiful Aaton XTR kit with a Zeiss 11-110mm T2.2 zoom from Four Corners.

I used the Aaton at film school, being lucky enough to shoot several projects at NFTS on S16mm. The school starts its cinematography students on celluloid, which is a massive boon as it demystifies this beautiful medium. I love the simple mechanics of the XTR, as well as the SR3, and the roll-off makes film far more forgiving than I’d expected.

We also hired horses and handlers from The Centre Of Horseback Combat, whose professionalism and good humour made the exterior shoot smooth and exhilarating.

We shot in natural light on the canal towpath, which echoed with horse’s hooves after many years of cyclists’ bells. Having gone well-beyond our zero budget, it was a miracle to be offered two of ETC’s beautiful LED panels by 3LR’s Barry Grubb. The FoS/4 PL16 and FoS/4 PL8 use daylight HDR six-chip LEDs with high output and could augment sunlight, provide subtle fill or act as strong directional key.

For our two interior days I used a Canon C100 to shoot and review rehearsals. Having no monitor or playback meant the team placed a lot of trust in me. Thankfully the Aaton’s viewfinder and the Zeiss zoom were in great shape and overall focus and aperture are solid.

As we had such limited film stock we decided to split the shoot between the Aaton and my C100. Having shot The Nest, a Neorealist- inspired short last year I knew I could grade the C-Log footage close to a beautiful 16mm look. 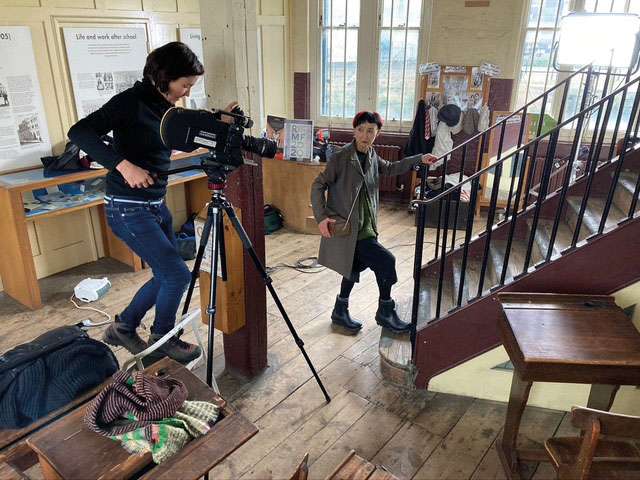 We shot all the key emotional scenes on 16mm film and used digital to cover ground on the longer performance elements where we needed to shoot, shoot, shoot. Neorealism explores real lives through rough landscapes and non-professional actors. We wanted to stay as close to this as possible.

B&W Super 16mm felt like the perfect medium and the lightweight ease of the Aaton XTR meant we were nimble around the horse and could safely hang out of windows. The emotional nature of Neorealist storytelling made handheld the obvious choice, to be close to the shoeshine, but we also used static shots, especially around the performance, where we break from the journey elements and ratchet-up the pace as the labour becomes the performance.
Lucy Harris, artist filmmaker and editor, is cutting the film and I’m sure she’ll bring a host of fresh ideas. I’m excited to be working with the colourist Michael Pearce again, having graded the C100’s ProRes 422 footage together on The Nest.

I’ve never shot a film 4:3, but director Tony Grisoni was convinced it was the right choice given were in homage to the great De Sica. I decided to shoot 1.85:1 and resize in the edit as it would give us leeway to reframe. But I was loathe to give up that precious celluloid and the misty, post-industrial landscape is beautiful in 1:185. It was pure joy to be back on film and reminded me to keep fighting for it.”