Cinematographer John Pardue BSC kindly shared details about the collaborative efforts that went into making ITV’s six-part drama, Angela Black, including a 13-minute, single-shot sequence that is key to the storytelling.

Directed by Craig Viveiros, and starring Joanne Froggatt, Michiel Huisman and Samuel Adewunmi, the show follows Angela Black, who seems to be living a good life. She is married to a hard-working family man, has two sons and lives in lovely suburban London. However, Angela’s picture-perfect life is hiding a terrible truth: she is suffering daily abuse from her controlling husband Olivier, and cannot escape him. Angela is then approached by a private investigator, Ed, who reveals all of Olivier’s sinister secrets to her. She must decide to either endure her husband’s abuse or trust Ed, and fight for her freedom. 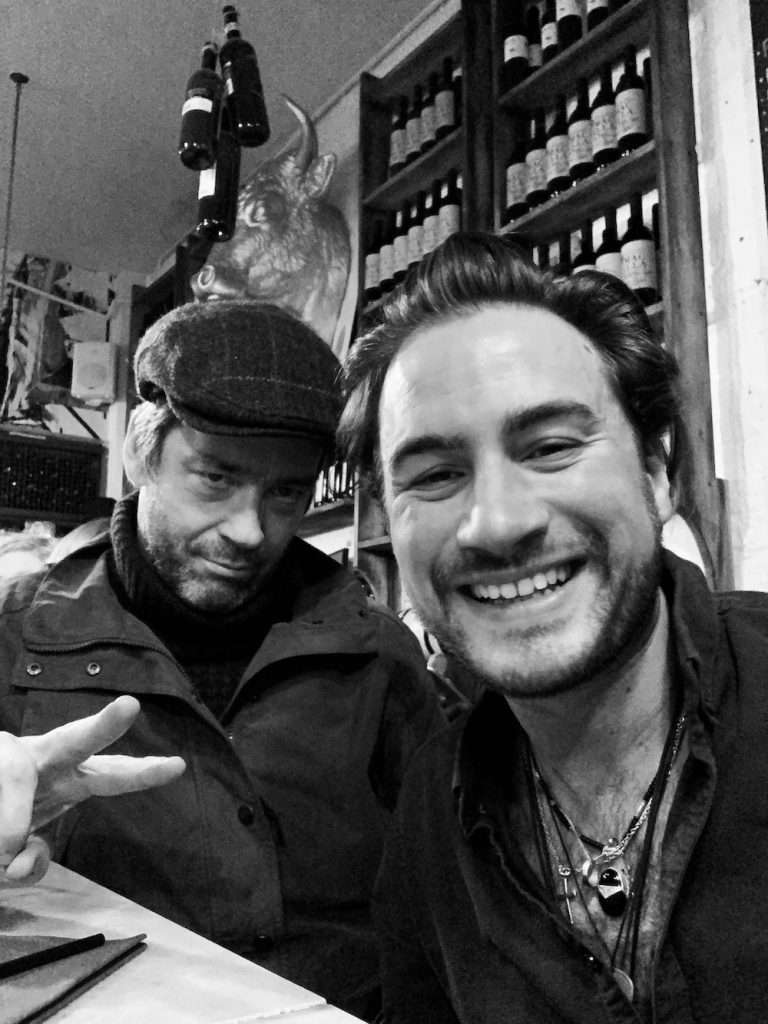 “Angela Black cleverly weaves a contemporary story of domestic abuse with the psychological suspense of an Alfred Hitchcock movie,” writes John Pardue BSC. “The writers, Jack and Harry William, were initially inspired by the Hitchcock classic Strangers On A Train (1951, DP Robert Burks ASC), and also by Hitchcock’s single-shot thriller Rope (1948, DPs Joseph A. Valentine ASC & William V. Skall ASC). This in-turn inspired us to devise a 13-minute shot with no edits, for a sequence taking viewers through every moment of the lead character’s disorientated behaviour, escalating to a point where the enormity of what she is doing starts to unravel in her mind. 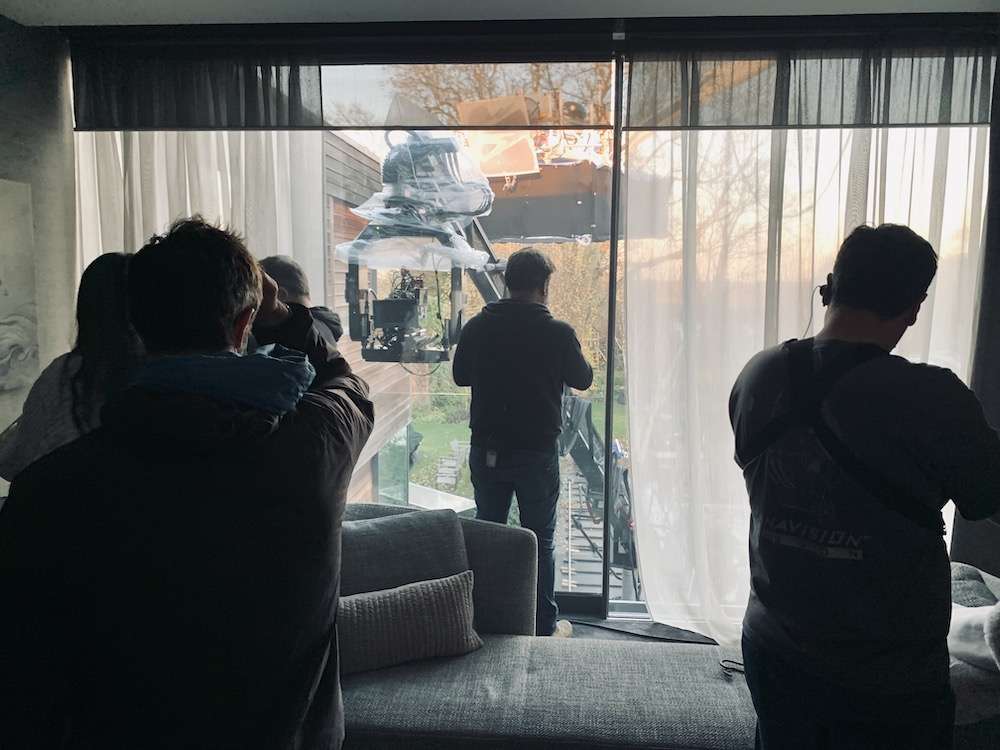 “After reading Jack and Harry’s genre-fusing script it was clear to our director, Craig Viveiros, that we would need to have a cinematic style that developed throughout the series. We used very clear geometry in the framing at the top of the story, utilising hard lines and shapes, as well as muted tones to articulate Angela’s imprisonment within the horrific scenario of her life. As the show progresses and Angela begins to reclaim some of her identity, the shapes start to soften off and the colours become more eclectic as her world opens up.

“We wanted a fluid approach to the camera movement”

“Another of the key elements to consider was the house this family lived in. We wanted a fluid approach to the camera movement, being able to leave the actors and then return to them. Being able to look into the house from the outside enhanced the space and tension between the characters, creating a sense of dread and ominous presence. The house also had to deliver all the story elements for the lengthy single-shot sequence, which occurs in episode three – which meant we had to make its architectural peculiarities work both photographically and for the drama. 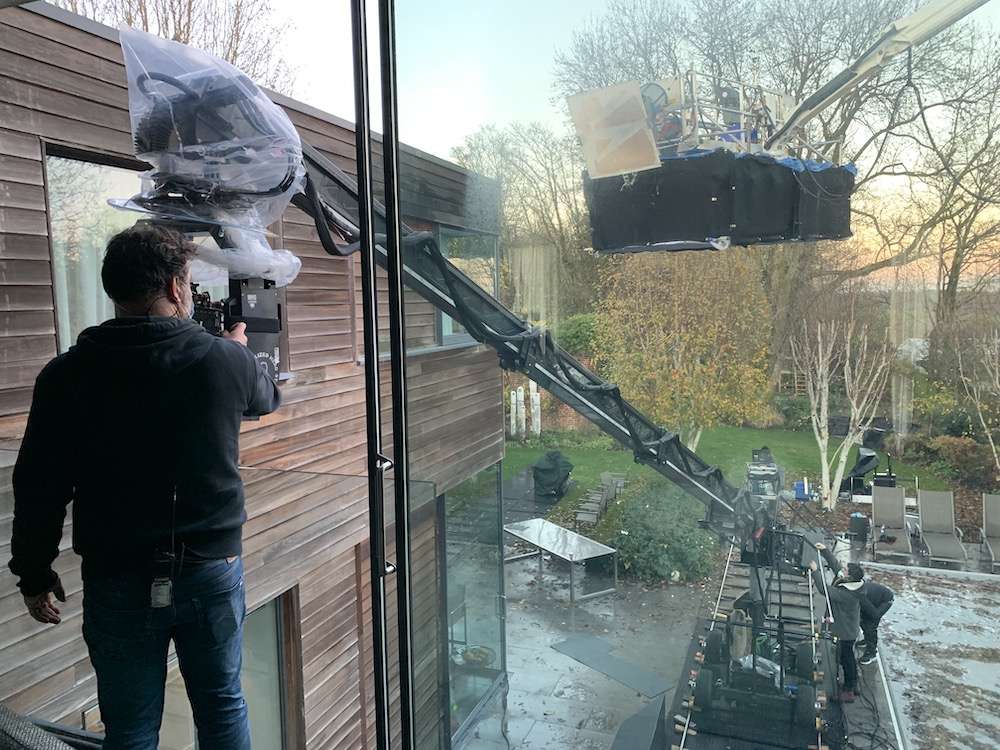 Key Grip Rupert Lloyd -Parry working out the point at which the techo needed to enter the bedroom window.

Craig choreographed a single-shot sequence that fulfilled the script exactly – and it was not without a few technical difficulties. We always imagined the main house would be a studio build, as so much of the story takes place within it. It often makes sense to build a key location in a studio for greater control, especially if there are some big sequences, However, the budget dictated that we would need to make this work in a location. We soon put aside concerns of lighting difficulties or whether there was enough space for the camera. I like a challenge and I think I can say the same for the whole crew of Angela Black. Solving problems is what we enjoy doing.

The single-shot sequence went like this: Angela (Joanne Froggatt) drugs her husband Oliver (Michiel Huisman) and once he appears sleepy, she leads him from the living room and directs him upstairs. We move with Angela to the back of the house as she continues to turn off the lights. The suspense of the shot continues to build as the camera exits the house and views events from outside before travelling up to a bedroom window joining Angela as she pulls back the duvet to help Oliver to bed.

We follow Angela back down the stairs in the darkness. There is a hint of moonlight when she meets her accomplice Ed (Samuel Adewunmi). He goes upstairs to the bedroom as we follow Angela through the front door, frantically running across the road intersection to a neighbour’s house. She rings the police with a fabricated story of an intruder in the house. As the emotional rollercoaster of what she has just set in motion starts to take hold, the police lights rush by the window, and she knows that it is time to return to her house. With a very real fear of what she might find, Angela walks back to her house where the police are parked-up with “blues” flashing.

The collaboration of a good crew is essential to achieving a single-shot sequence like this. Tom Wilkinson’s excellent Steadicam work was central with the addition of a clever Technocrane shot taking in the perspective of looking into the house from outside as we rejoin Angela’s journey in the bedroom. The outside shot provided a visual breather allowing Joanne to reach the bedroom without us having to awkwardly follow her up. Getting the Technocrane into the garden was a bit of a headache for key grip Rupert Lloyd-Parry and assistant Alex Kelleher but, taking it all apart and back together again was all in a morning’s work.

The Technocrane part of the sequence was at one point going to be made on a Ronin stabilised head with a ‘hand-off’ in the bedroom. However, the VFX team was confident that a stitch was achievable with an eye and distance match between the crane and the Steadicam. It meant we could use the Steadicam both up to the Technocrane section and before picking it again to travel from the bedroom across the road junction and up to the neighbour’s door, where we made another VFX stitch enabling us to come back and shoot this interior section of the neighbour’s cottage that was tented day-for-night – an idea suggested by 1st AD Simon Damast to give more time for our night-for-night sequences. In the end, there were four VFX stitches to the sequence allowing us to shoot the sequence over three nights. The final stitch was again at the door of the neighbour’s cottage as Angela exits returning to the family house with police cars in attendance.

Another area of discussion was the 60-metre dash as Angela crossed the traffic junction to the neighbour’s cottage, for which we decided to start behind Joanne and wrap around her. There was much talk of rickshaws or running with a Movi-Pro stabilised head for speed, as we surmised that Joanne would be running quickly having faked a break-in at the house. 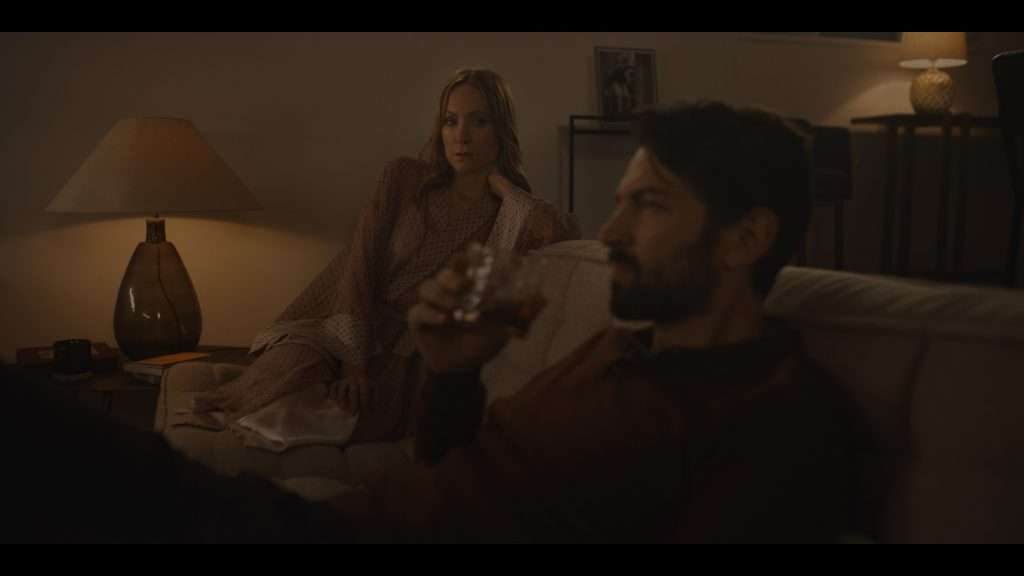 Angela gives Olivier a drink which is drugged

Principal camera operator Tom Wilkinson opted for the Steadicam knowing that this was the only way to achieve a shot both following and then leading an actor. He switched the Steadicam halfway through to a ‘Don Juan’ configuration, pointing the camera backwards when he was walking forwards. Credit should also be given to focus puller Piotr Perlinski for nailing each take.

The shoot took place at night, which involved both exterior lighting with cranes and small interior lights where they could be hidden. We had to make sure the transitions from a warm domestic interior colour to a night-light or moonlight would be achievable in shot. Angela switches off the lights one-by-one as she walks around the house and this needed to be believable and seamless with our dimming. We ended up using some carefully hidden Astera tubes with additional ARRI Sky Panel 60s through the skylight on the roof, all dimmable together for the moonlight takeover.

When we moved to the street we discovered, luckily, that at some point between the tech recce and the shoot, the sodium street lamps had been replaced by new LED lights; a moment of movie serendipity perhaps. Gaffer Gary Hedges and best boy Steve Walsh switched to the Sky Panel 360s to go on the pickers for the exteriors, a dimmable LED with the ability to introduce some green to match the LED streetlights. The fall-off of the 360s also helped blend back and front light for the different direction of camera travel. 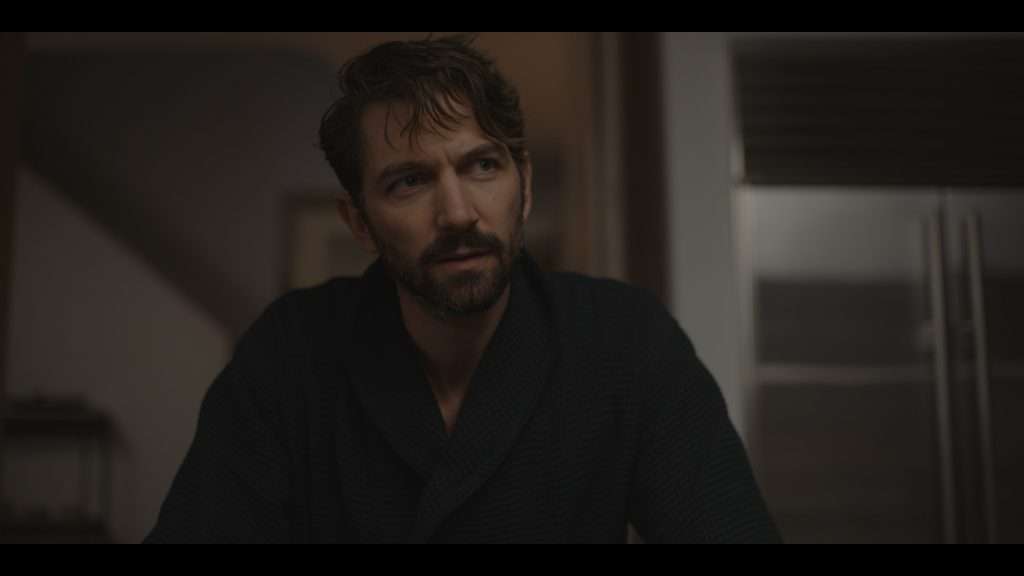 I approached the photography in the show in much the same way as I had photographed the BBC mystery thriller And Then There Were None (2015), a previous mini-series collaboration with Craig. We both felt that a similar naturalistic approach would create a believable world rather than anything over-stylised. Composition and camera work were very much dictated by the emotional weight of the scenes. Tom and I enjoyed Craig’s sense of shot design so the shooting process was very fluid. We used the Sony Venice large format with K35 lenses. The camera is great for magenta-green swing in the skin tones, and the faster 2500ISO setting is really useful. Movietech gave us a great package with excellent back-up.

We followed a more filmic aesthetic rather than trying to make a statement with a heavy-handed grade. Andrew Daniel graded the show at Goldcrest. He built on what we had achieved in-camera, creating a sense of darkness without crushing the whole image, using a delicate balance with the contrast levels. I really enjoyed the grade process and Andrew’s attention detail is excellent. He found a good place for our colour palette with some subtle hues adding to the contemporary feel of the cinematography.

It is far too easy to talk about the technical concerns of a complicated shot and forget to mention the patience of our cast. While we tried to sort out lots of lighting and camera conundrums (under some degree of pressure), our cast gave fantastic performances on every take, and sometimes there were quite a few takes. Joanne Froggatt never dropped her level of performance throughout the show and the single-shot sequence is a good example of the emotional intensity that she managed to maintain on a cold night wearing a nightdress, whilst we all ran around in thermals and heavy jackets.”