DP Jigme Tenzing delivers a breath of fresh Himalayan air for Lunana: A Yak In The Classroom

Enjoy a big, deep, beautiful breath of fresh air from Bhutan. Opening with a backshot of a woman addressing the sun-kissed mountains with song, Lunana: A Yak In The Classroom will transport you to a world apart.

Pawo Choyning Dorji’s directorial debut, shot by his cousin DP Jigme Tenzing, follows Ugyen (Sherab Dorji), a twenty-something who is posted to the village of Lunana to teach in the world’s most isolated school. It is a punishment for continual tardiness and disinterest during the penultimate term of his mandatory five-year government service.

Getting to this far-flung outpost, some 12,000ft above sea-level in the Himalayas, involves a taxing seven-day hike from Ugyen’s home in the bustling Bhutanese capital city of Thimphu. And, when the power in his mobile phone and iPod begin to dwindle, so do his spirits, as Ugyen feels even further away from his dream of seeking fame and fortune as a professional musician in Australia. 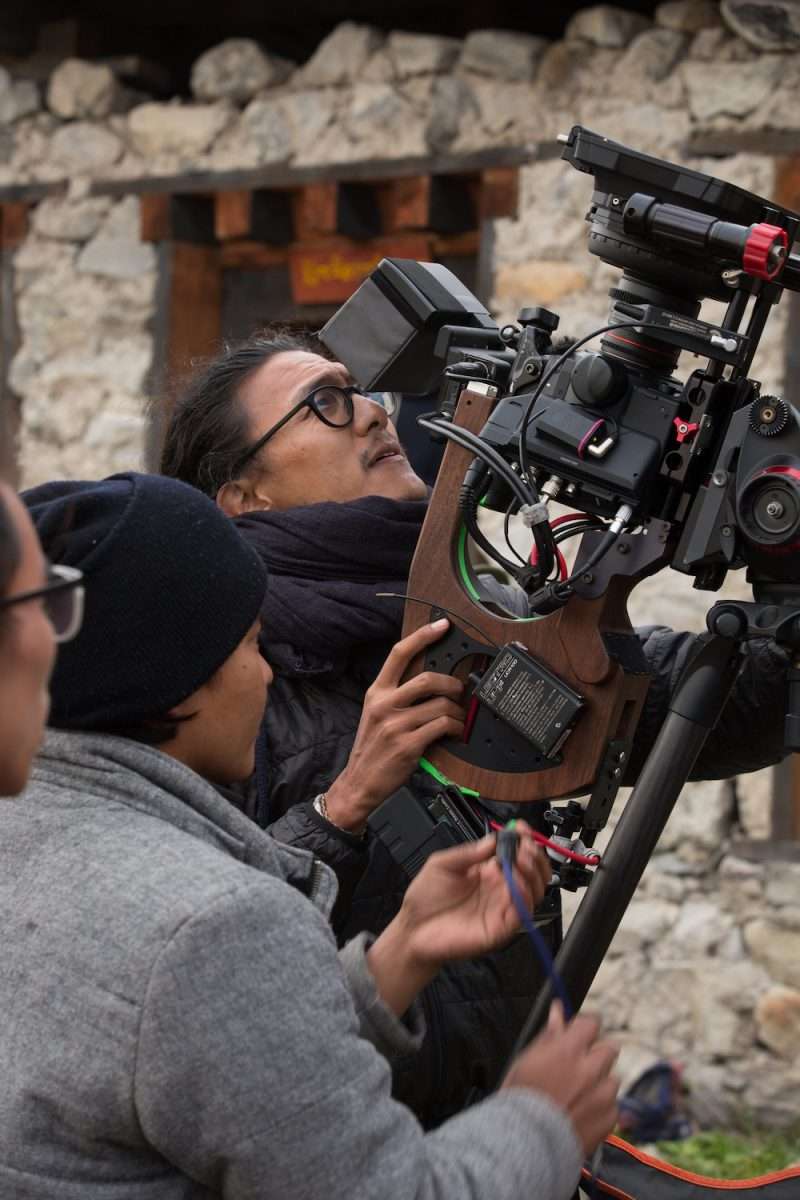 However, Ugyen’s despondency, at having to teach in a old wooden hut with no supplies, as well as freezing living quarters, is gradually dispelled into dutiful delight, when he encounters eager pupils, such as 9-year-old Pem Zam (herself), and is entranced by the village’s most accomplished singer Saldon (Kelden Lhamo Gurung). Experiencing the unqualified respect and hospitality of the villagers too, and with a nationally-revered yak in his classroom, Ugyen discovers new meanings about community and connection high-up in the glorious landscape.

After winning audience awards at numerous festivals worldwide, Lunana: A Yak In The Classroom, lined-up as Bhutan’s official entry on the coveted 2022 Oscar shortlist for Best International Feature. Whilst Dorji is an accomplished photographer, and was the producer of Hema Hema: Sing Me A Song While I Wait (2016), shot by Tenzing, this was his first outing at the directorial helm. Tenzing’s cinematographic work on the film has been lauded for its spectacular and simple depiction of people and panoramas, as part of a cinematic experience described as ‘irresistibly entertaining and charming’. 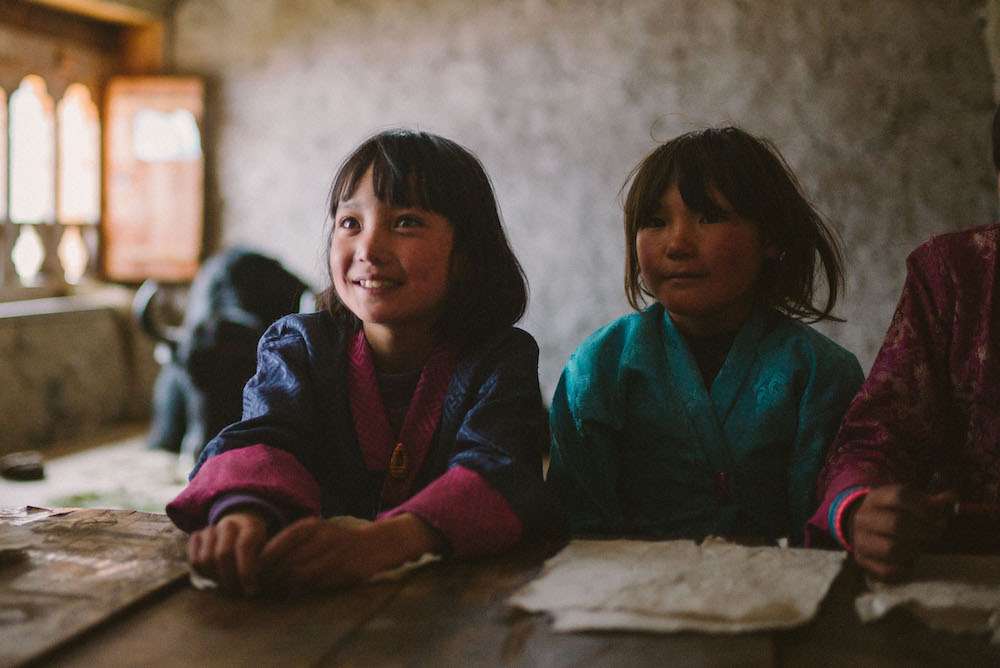 “We made the film with precious few luxuries and had no huge expectations. So we are very happy that it has achieved such recognition around the world, especially the Academy nomination,” says Tenzing, a Bhutanese national who lived abroad during his formative years and studied filmmaking at New York Film Academy, before settling in his native Bhutan a decade ago.

“Pawo and I grew-up together as kids. I have known him for as long as I can remember, and was honoured when he asked me to shoot this film for him,” notes Tenzing. “He was frank with me about his lack of directing experience, but he had an open mind and trusted me and my crew to help guide him through the filmmaking process. 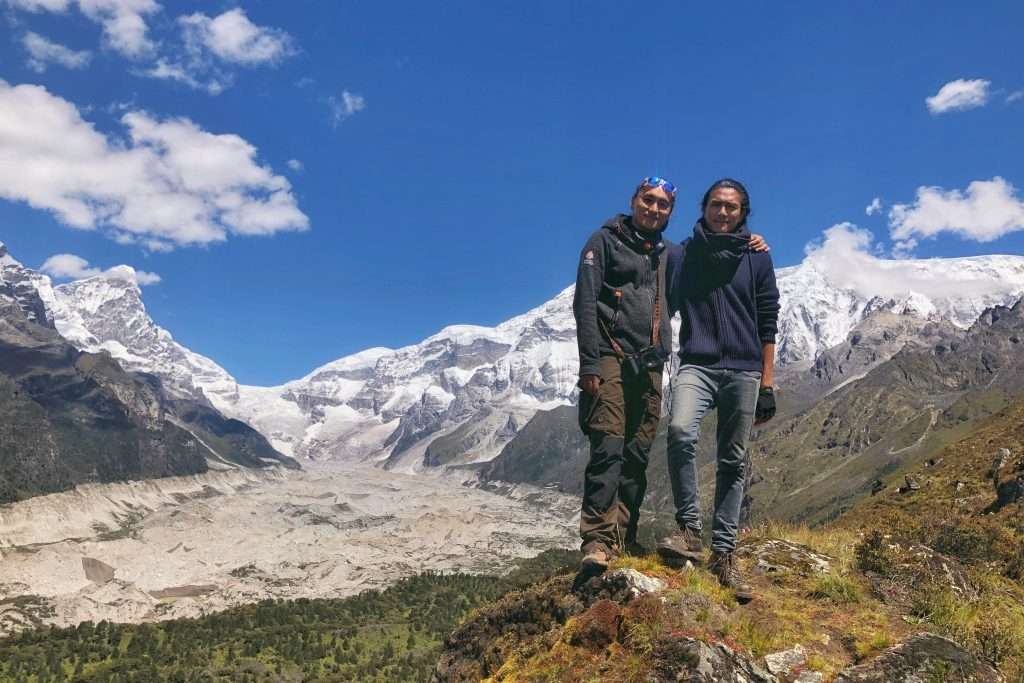 “Pawo’s idea for the film was inspired by the documentary School Among The Glaciers (2003, dir. Dorji Wangchuk), but we did not want it to have any effect on the visuals for our film. I don’t like to watch other films as references, as I might indirectly mimic something from them. I like to be as honest as I can be to with the script and what the director wants on-screen. So I assembled a lookbook of landscape and portraits images from the internet and social media, and put them to Pawo to see how far he wanted to go with cinematic lighting and camera placement.

“Pawo’s response was to keep the camerawork sincere, simple and honest in its nature. Other than that he gave me freedom in the overall look of the film. He accepted the idea that traditional close-ups could also include people facing away from the camera, observing them from behind as they commune with the landscape and surroundings, such as Saldon does in our opening shot.” 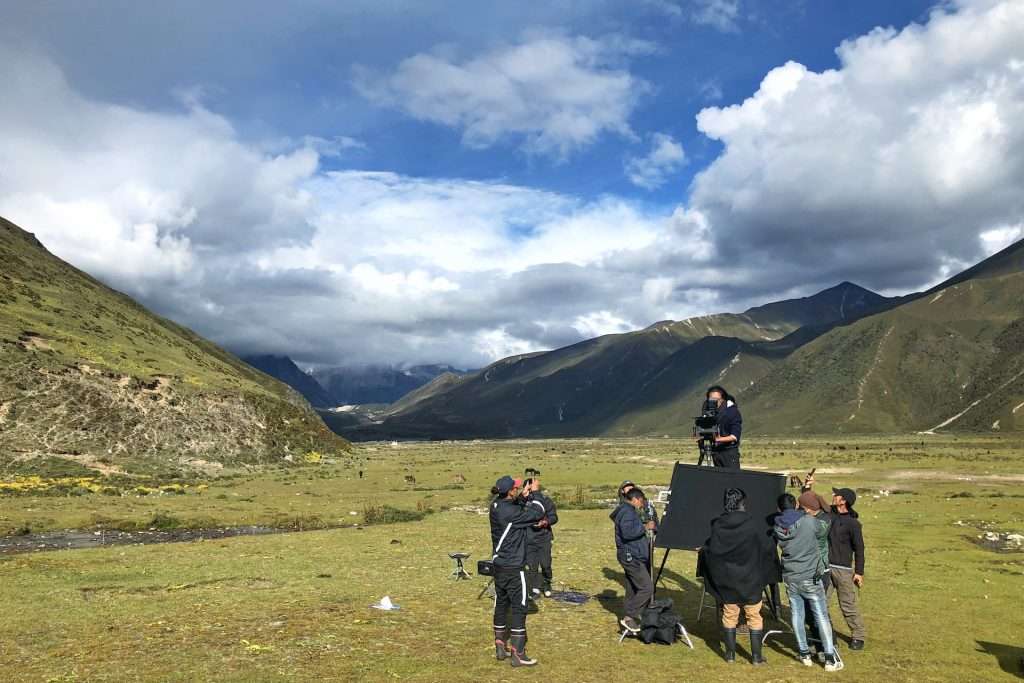 Lunana: A Yak In The Classroom was photographed over 45 non-consecutive days, between August and October 2018, at locations in Thimphu and noted points on the trail to Lunana, with the mainstay of production taking place in the village itself. Other than dismantling a wall in the actual school, to accommodate the pupils and the yak, all the remote locations were authentic and remained intact. The vast majority of the cast were drawn largely from Lunana itself, most of whom had never seen a camera before, let alone acted in a feature film.

During prep in February 2018, Tenzing and Dorji undertook tech scouts to Lunana, arriving by helicopter. The DP recalls being immediately enchanted on making his first acquaintance with the villagers, including Pem Zam, and remarks, “The highlanders are tall, good-looking people with strong and beautiful faces. It is easy to fall in love with them.”

However, the DP admits that the logistics – of shooting at the world’s most remote school, high in the Himalayas, without mains electricity nor mobile network connections – were daunting. He also remarks, “I live 6,500ft above sea level in Thimpu, but Lunana is nearly double the elevation, and you can initially feel dizzy from altitude sickness.” 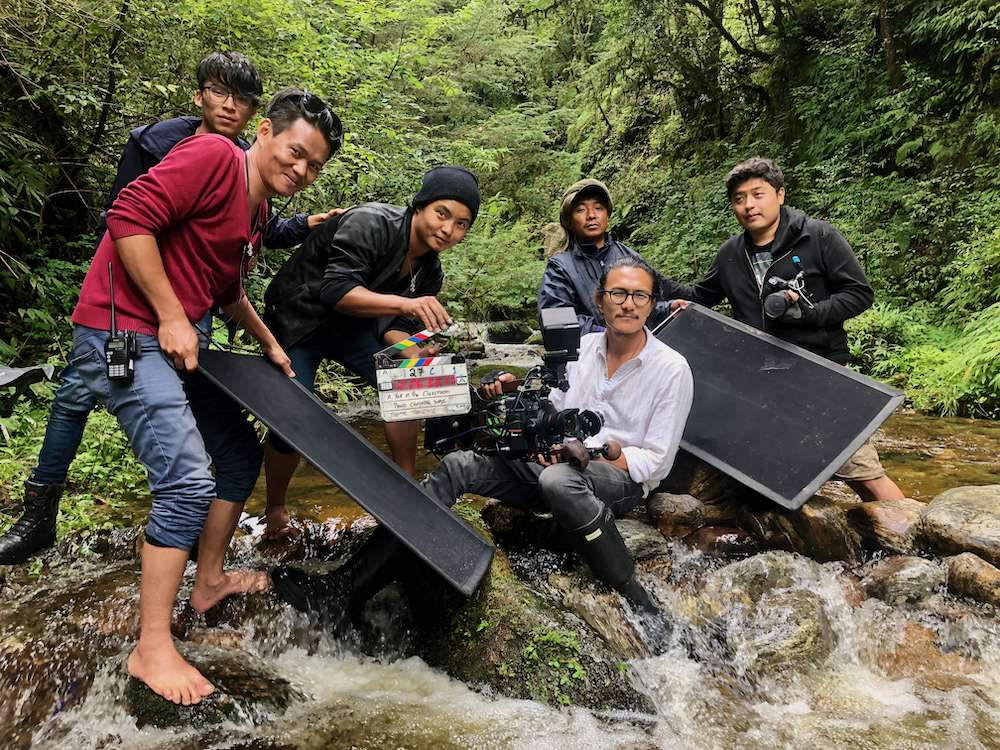 Tenzing’s camera and lighting crew comprised of many regulars. “We have good relationships and friendships, and are like a family. They are resourceful and know how things work,” he says.

The DP and director toyed with the idea of shooting Ugyen’s trek to Lunana by foot and mule, but the practicalities of transporting the filming equipment and a 30-strong crew over sometimes treacherous terrain, was too risky, and it was better to err on the side of caution and safety.

Wanting to do justice to the breath-taking vistas, whilst also having the ability to focus on faces and groups of people, Tenzing framed in widescreen 2.35:1 CinemaScope aspect ratio, using his own Canon C300 MK2 camera and Rokinon spherical lenses.

“It’s an affordable and perfectly portable package for shooting in Bhutan, and gives nice, filmic images – although we joked that IMAX would have been good to show the landscapes,” he says. “I have used Canon cinema-series cameras for a while and feel very comfortable in knowing how to push the sensor before the image starts to degrade. I shot at 2K in 12-bit 444 XF-AVC, the highest internal codec in the camera, and used a basic built-in LUT to embrace the verdant mountain pastures and the wide blue skies. It was a perfectly good canvas for this story.” 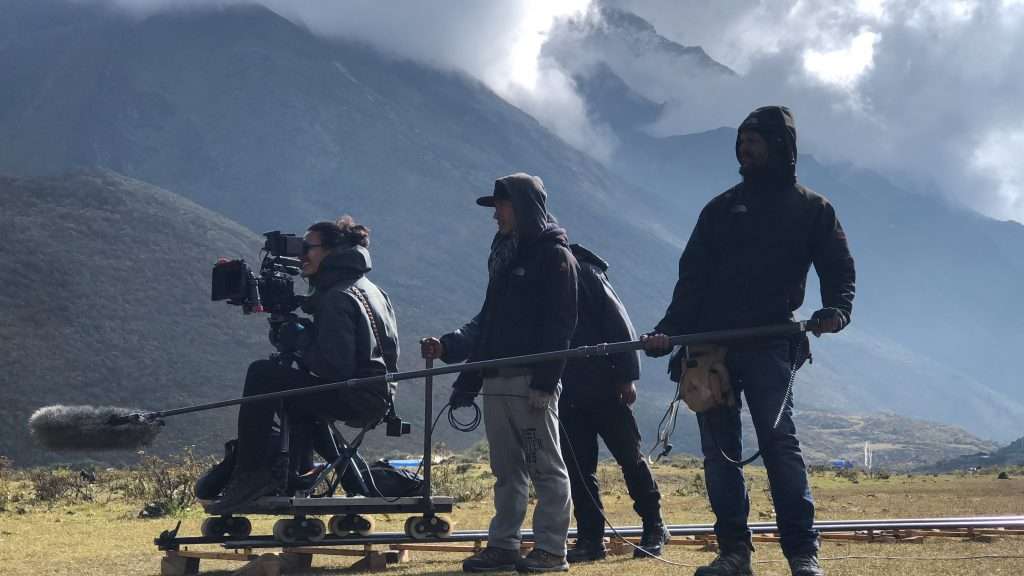 As for his choice of glass, Tenzing declares, “I wanted to keep a crispness and cleanness across the width of the image, and the Rokinons have no distortion. At T1.5, the lenses are fast too, which was very helpful when we shot in available light at the end of the day, as well as the dark interiors and night scenes. I employed six Rokinon prime lenses during the shoot, ranging between 14mm to 85mm, and used those between 24mm and 35mm for the portraiture.”

Tenzing operated throughout the shoot, in tune with a pre-ordained plan as regards the camera movement. “We felt that subtle, steady handheld at the beginning of the film was a good way to depict Ugyen’s frustration at being posted to Lunana. When he decides to stay and teach the kids to the best of his ability, we switched to more static and controlled framing on the tripod or dolly for the rest of the film.”

The lighting package was necessarily kept minimal and easy to transport, comprising of just two LiteGear LiteMat 4s, two Kino Flo 4ft 4Banks, and two off-brand LED panels that my gaffer found on Ebay, along with 8x8ft and 12x12ft custom-built overheads, variously covered in fabrics that would help to reflect, shape or cut the light.

“We harnessed the available/natural light on our exterior scenes as much as possible, and used negative fill to support the portraiture. Depending on the sun and the weather, we often had to protect the light for continuity,” Tenzing explains. “I tried to stay with one-source lighting on the darker interiors and night scenes, using real light from fires or lanterns, but I supplemented it with something subtle from a LiteMat or a 4Bank on occasion.” 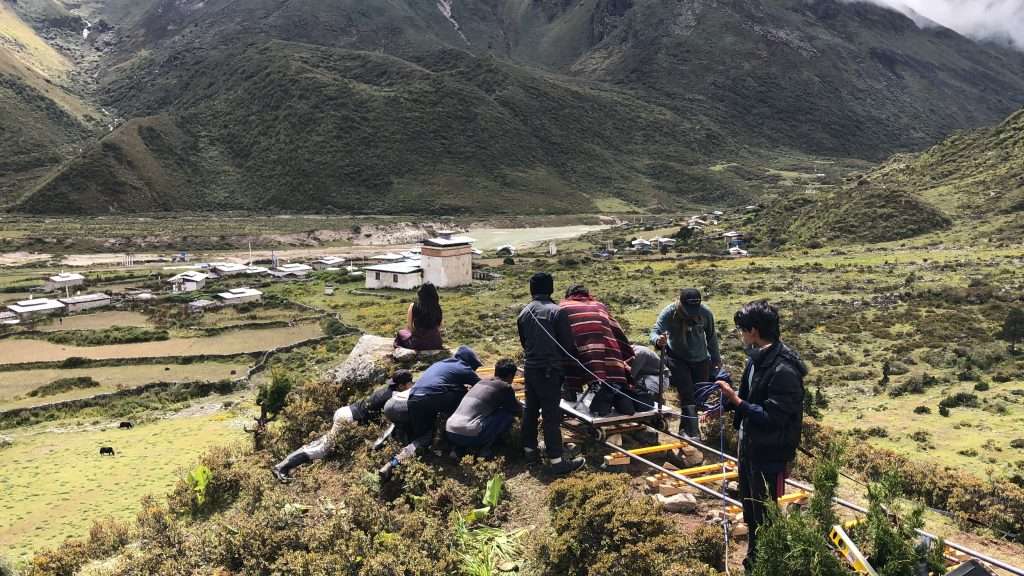 Power for the camera and lights consisted of two Honda suitcase generators, an inverter battery, and a large solar panel.

“As there are no cars or other forms of motorised transport in Lunana, moving the equipment to some of our mountain locations often involved quite long hikes up some very big hills,” Tenzing recalls. “It was a good workout, because the power sources are pretty heavy and hard to lug around. Thankfully, we had the willing help of some of the villagers and their mules on those occasions.

“I did not have the luxury of a DIT, nor data wrangler during production. For peace-of-mind, at the end of each shooting day I made two back-ups of the rushes, as did my 2nd AC, making four in total. I reviewed the footage as much as I could everyday, and did some editorial assemblies of Pawo. But sometimes the days and the effort were so taxing that I just crashed and slept after I had done the back-ups.”

Tenzing completed the DI grade in early 2019 at Taipei Postproduction in Taiwan, with colourist Rick Sung. “As I had tried to capture as much as possible in-camera, the colour grading was really about balancing shots, adjusting colour temperatures and tints. It was simple really, and we had it completed in under two weeks.”

All-in-all, Tenzing says, “It was a very happy shoot, and I had a great time working with Pawo and my crew. It was an enormous privilege to go to Lunana and to enjoy the spirit, support and kindness from the people there. It was an uplifting experience I will never forget.”