DP Jendra Jarnagin got creative with camera, lenses and lights on the low-budget Asking For It

Creating bold visual stylisations to depict a story involving issues surrounding rape culture, the mistreatment of women, not to mention racism and homophobia, but all on a low-budget, with precious little prep time and a tight schedule, called for no shortage of resourcefulness and creative skills from New-York-based DP Jendra Jarnagin.

Encompassing surreal live action, often frenetically intercut with smartphone/vlogger footage and freeze frames, Asking For It, marks the directorial debut for Eamon O’Rourke, and follows, Joey (Kiersey Clemons), the cheerful waitress in a small-town diner, who lives with her grandparents and is trying to figure-out what to do with her life.

However, things change dramatically when Joey is sexually assaulted following a date with an old friend, Mike. Regina (Alexandra Shipp), a mysterious stranger at the diner, takes the wounded Joey under her wing and introduces her to a fearsome all-femme vigilante gang, called the Cherry Bombers, who operate from a ranch that is also a safe haven for abandoned youngsters, drag queens, lesbians, transgender men and women, and other outcasts.

Joey quickly learns that the ferocious Cherry Bombers are devoted to helping women out of dangerous situations, often meting-out vengeance on abusive men, particularly those who have managed to escape legal justice. Although relatively young and wide-eyed, Joey signs-up for the fight against a formidable foe, in the form of Mark Vanderhill (Ezra Miller), the leader of the gun-toting, alt-right Men’s First Movement.

“I was intrigued by Eamon’s script, but before I committed to the project, I wanted to know how he was going to handle the story and the sensitive subject matters surrounding the universality of negative experiences endured by women and the wider LGBTQ+ community,” says Jarnagin, who also reveals she wanted to pursue filmmaking from age 12, with a focus on cinematography by age 15. Studying at NYU Tisch School Of The Arts in the early 1990s, confirmed cinematography as her preferred path, and she simultaneously worked as a gaffer to support herself, while also shooting freebies as a DP to gain experience. 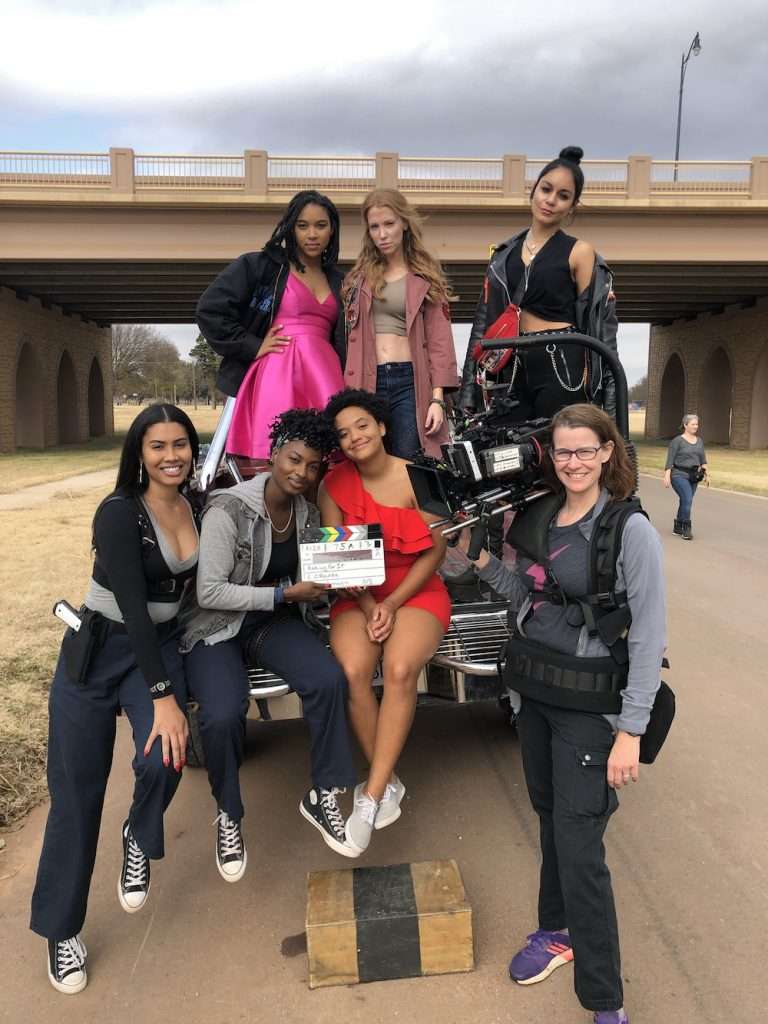 “Eamon was open and honest with me about keeping things real, and the fact that we were of like-mind, when it came to casting LGBTQ+ actors in appropriate roles, told me a lot about his values and vice versa,” she says.

“It was exciting to take the visual storytelling in an altogether more rough, raw and dirty direction than I have before”

With regard to decoding the look for the movie, Jarnagin says, “Overall, Eamon wanted this film to be a wild ride – a badass fantasy grounded in reality – for it to be visually-interesting and boldly-stylised on the one hand, while being balanced and emotionally-motivated by Joey’s experience in a more naturalistic way. He especially wanted to express a level of surreality around Joey as she devolves into the world of the Cherry Bombers.

“I have shot a lot of comedies and productions that have involved flattering portraiture lighting,” adds Jarnagin whose credits include The Opposite Sex (2014), TRI (2016) and Entangled (2018), and the online series In Between Men (2010-2013). “So it was exciting for me to take the visual storytelling in an altogether more rough, raw and dirty direction than I have before.”

Working to a five-day-week schedule, production on Asking For It took place over 23 shooing days during October 2019, in and around the city of Guthrie and Logan County, Oklahoma, where Jarnagin enthuses, “We had great locations, all within a 15-minute drive from our unit base, and enjoyed the support from a welcoming community.”

In an enterprising move, Jarnagin reached-out through local cinematographic grapevines to assemble a crew who, apart from A-camera/Steadicam operator Brad Grimmett, were all new faces to her. Grimmett wielded the camera for 95% of the movie, before illness required the substitution of KC Kennicut into that role. The first ACs were Phil Byrd and Nolan Ball from Oklahoma, with key grip Keith Cutler and his crew coming in from Atlanta. The gaffer Jacob Keen and the electric crew were also from Oklahoma.

“Although I had never worked with the vast majority of my team before, they were very supportive, and they all gave their very best,” says the DP.

Prior to production, Jarnagin worked with colourist Taylor Mahoney, at Tunnel Post in Los Angeles, on a small selection of day/night, exterior/interior LUTs that would yield a level of film emulation to the overall look, with slightly muted colour palettes, reduced contrast and raised toes to maximise shadow detail in dark scenes and the night work.

“Although we started-out shooting with a number of LUTs, I quickly found the sweet spot and ended-up using a couple of them for the majority of the shoot,” she reveals.

Jarnagin had just three weeks of prep on the film. Agreed early-on to a kinetic camera style involving handheld and Steadicam, meant having to sacrifice her preferred option of having a second camera for the vast majority of the shoot.

“Xtal Express Anamorphics are pretty wild, and not a choice to be taken lightly”

A well-accessorised ARRI Alexa Mini package was rented from a local production company in Oklahoma, although the lenses she had in mind – vintage Xtal Express Anamorphics – to support the surreal and slightly abstract imagery of the main live action, were sourced separately from Scheimpflug, better known as Flüg, a speciality equipment rental house in NYC. Jarnagin ingenuously put the call-out for the Xtal Express lenses via a cinematographic Facebook page, which was picked-up on by Flüg.

“As I had such little time for prep, I went with the Alexa Mini as I know the camera well and could trust the wide dynamic range of the ARRIRAW image to capture whatever we threw at it,” she recalls. “I also knew that it would be perfect for the handheld and Steadicam work we wanted to achieve, the high-speed and slomo work to depict Joey’s emotional dislocation, and the quick-fire pace of the schedule.

“To help convey Joey’s extraordinary journey into the badass world of the Cherry Bombers, I had previously tested and wanted to use, the vintage Xtal Express Anamorphics. But they are pretty wild to work with, and not a choice to be taken lightly.”

Developed in the 1980s by the esteemed Joe Dunton BSC MBE at JDC in London, (subsequently acquired by Panavision), Xtal Express lenses have been used to on many high-profile features, including Star Wars Episode VI, Layer Cake, Neon Demon, Guardians Of The Galaxy and Ex Machina. They also remain a popular and enduring lens choice for cinematographers shooting music promos and commercials, especially when a striking and unique visual aesthetic is required.

“The Xtals can give an extreme and distorted look, especially the wider-angled glass, in they way that they render the out-of-focus area of the image and the bend at the edges of the frame,” Jarnagin explains. “We shot with a 50mm for the most part, and sparingly used the more distorted shorter focal lengths, such as the 24mm and 35mm, but also used the 85mm and 100mm for medium and longer shots.”

As a note of caution, Jarnagin says, “The Xtals also flare a great deal, often in whacky ways, and that is a characteristic which is hard, sometimes annoying, and frequently impossible, to control. So we leaned into the thinking of “If you can’t beat them, join them,” in terms of the way those lenses flare.

“You can see some pretty outrageous flares throughout the film, but the one I like best is when Joey first encounters the Cherry Bombers in the backroom of the ranch. We blocked and timed the camera choreography, so that a gooseneck table lamp would actively create a hard-line flare across the image to underscore the story beat.”

By way of contrast, the footage of antagonist Mark Vanderhill and members of the Men’s First Movement, which is intercut with the main live-action, was shot using a variety of prosumer, smartphone and laptop cameras. Much of that footage was captured by 2nd unit DP Rafe Scobey-Thal.

For those who have never visited, Oklahoma truly is a place, “Where the wind comes sweeping down the plain…” as the lyric goes in the theme song of Fred Zinnemann’s 1955 classic movie Oklahoma, shot by DP Robert Surtees ASC.

“I had been warned about the wind, and that it would, more likely than not, have a huge effect on what we could do safely with our exterior lighting set-ups,” says Jarnagin. “I even warned DP Rodrigo Prieto AMC ASC, who was scouting in Oklahoma at the time, and told him ‘Make plans now… the wind will handicap you’.”

“Due to safety concerns, it just wasn’t feasible to have 6x6s or 8x8s bouncing light like one would normally do. So the Maxi Switch became a good, large soft source alternative to deploy on our exteriors,” she says.

Thanks to Jarnagin’s ability to encourage vendors to loan demonstration equipment to the production, her lighting resources also included Rosco DMG Lumière Mix LED fixtures, and the final rental package also comprised Astera Titan tubes, several ARRI SkyPanel S60s, a few ARRI M18s and a smattering of small Tungsten fixtures including par cans and gels. Most of these were deployed for the colourful scene in which Joey meanders through a wedding party at the barn, and into the backroom where the Cherry Bombers are gathered.

“We shot that scene using Steadicam in two directions – one from Joey’s POV of the partygoers, and then the reverse taking in her reactions in medium close-up. It was great fun rigging-up all of those different lights, to pour-in colour and atmosphere, mainly from above, and I’m quite pleased with the final result. It’s one of my favourite scenes in the movie.”

While Asking For It was shot pre-pandemic, in what Jarnagin calls “the before times”, the final grade took place during lockdown and was conducted remotely between Tunnel Post LA and Jarnagin at home in NYC, via Sohonet’s Clearview Flex system.

“I set-up my LG 4K HDR C9 television at home, in tandem with a Retina display iPad Pro, and used both to monitor during the DI grade,” she explains. “If there was any doubt about the image, I went with the picture on the iPad Pro, as that is recognised around the industry as the de facto standard for reliable colour.”

Regarding the key challenges of shooting Asking For It, Jarnagin says, “The production had a much smaller budget than you would think by looking at the finished result. The hardest thing was shooting an ensemble cast for the vast majority of the production, with just one camera. That meant having to sacrifice coverage, prioritise which characters we shot together or in close-up, and making sure we gave enough material to the editorial team to make dynamic cuts. That forces you to make hard decisions and be really disciplined, and I am happy with the way things turned out.”

On the wider subject of women working behind-the-camera, Jarnagin concludes, “It is encouraging to see more and more women getting opportunities, doing excellent work, and being rewarded for their efforts with nominations and awards at prestigious events.

Joey gets triggered at a showdown with Chief Morrill

“But despite a noticeable increase of women working behind-the-camera in the last few years, the actual figures remain quite low, and the glass ceiling in regards to larger budget productions is still very much a major factor.

“I hope that my work will inspire belief in other women who want to work in the camera department. I am now very much on the look-out for larger, more meaty projects. A streaming series would do very nicely at some point in the near future.”